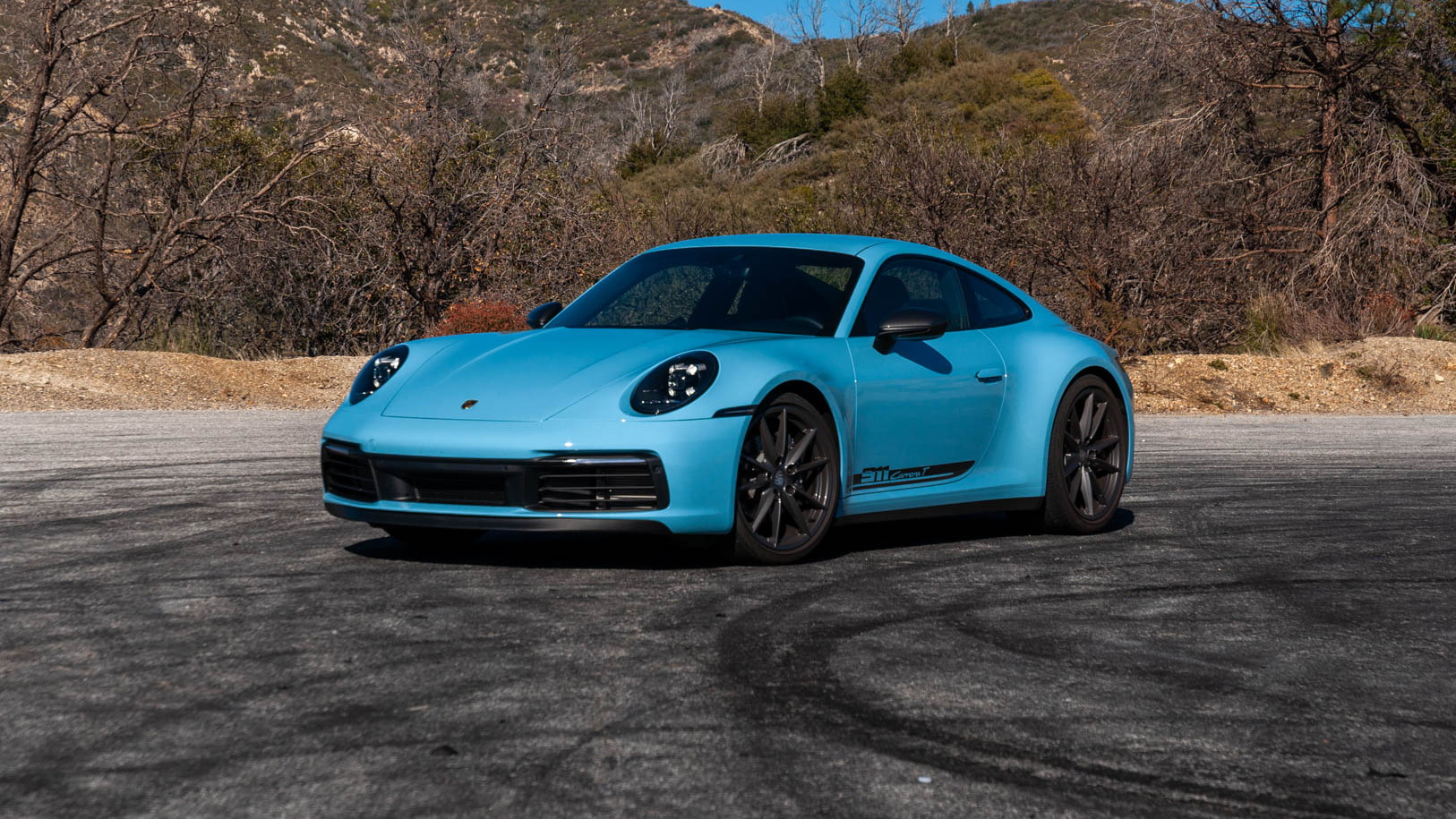 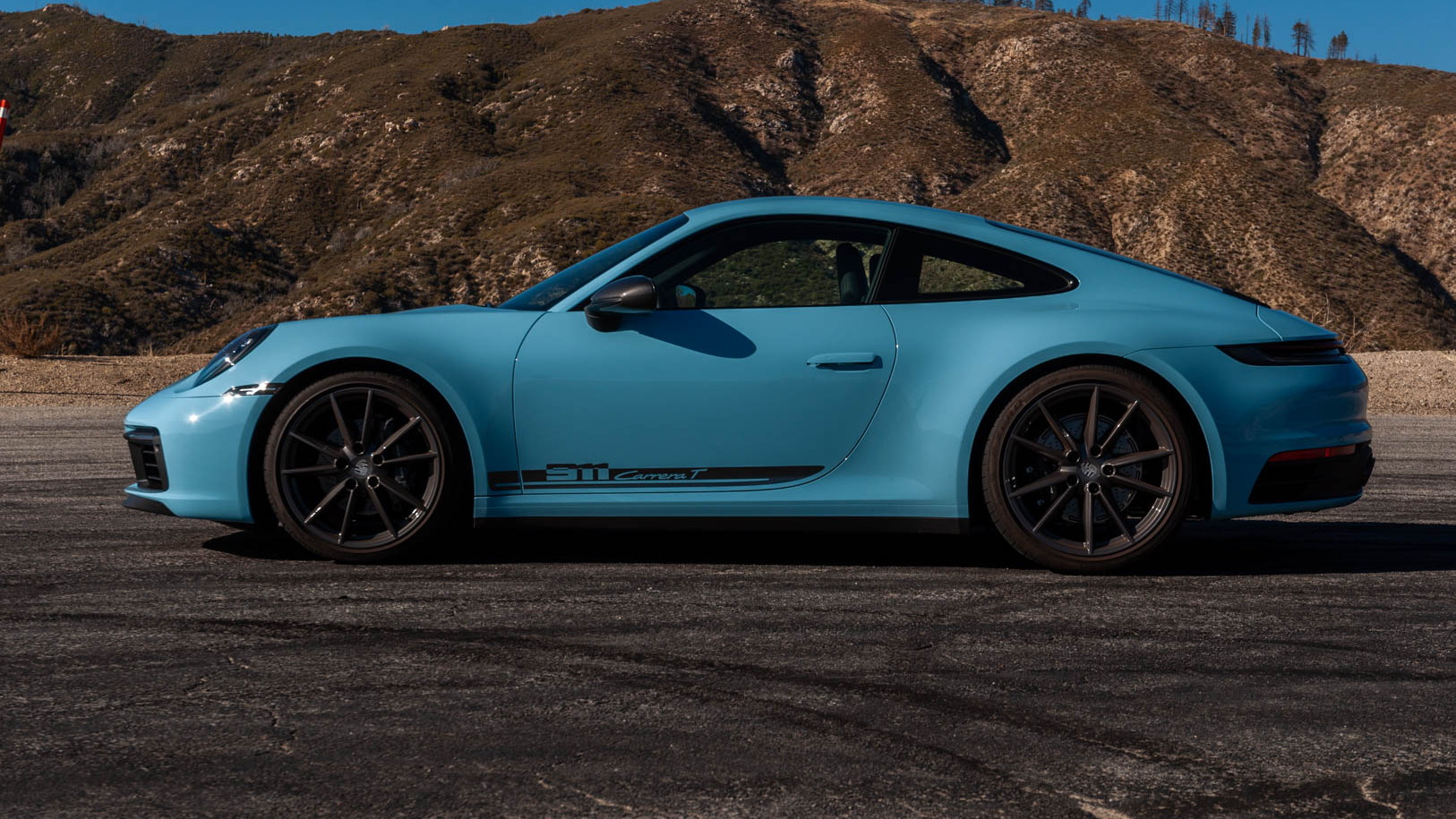 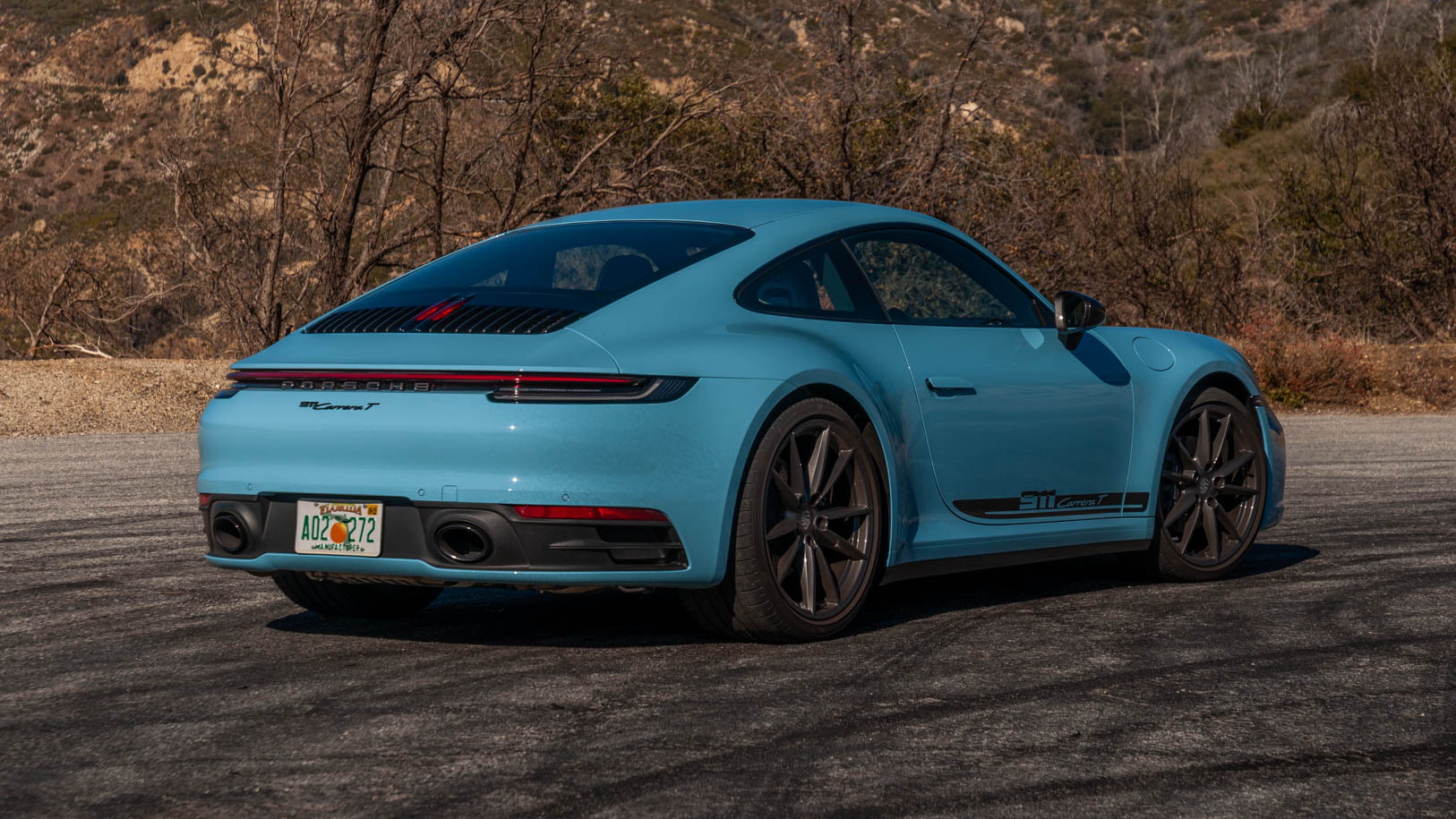 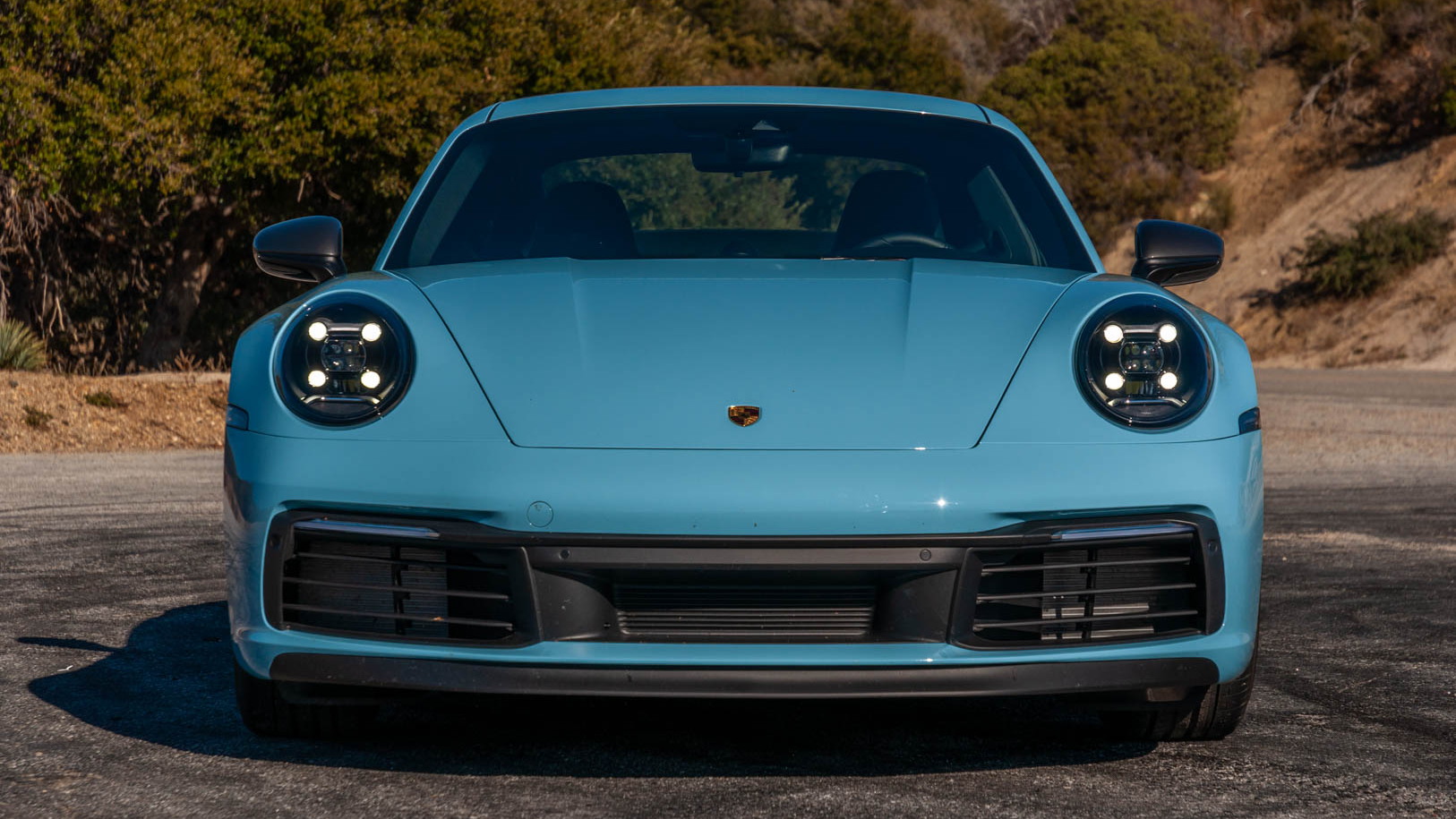 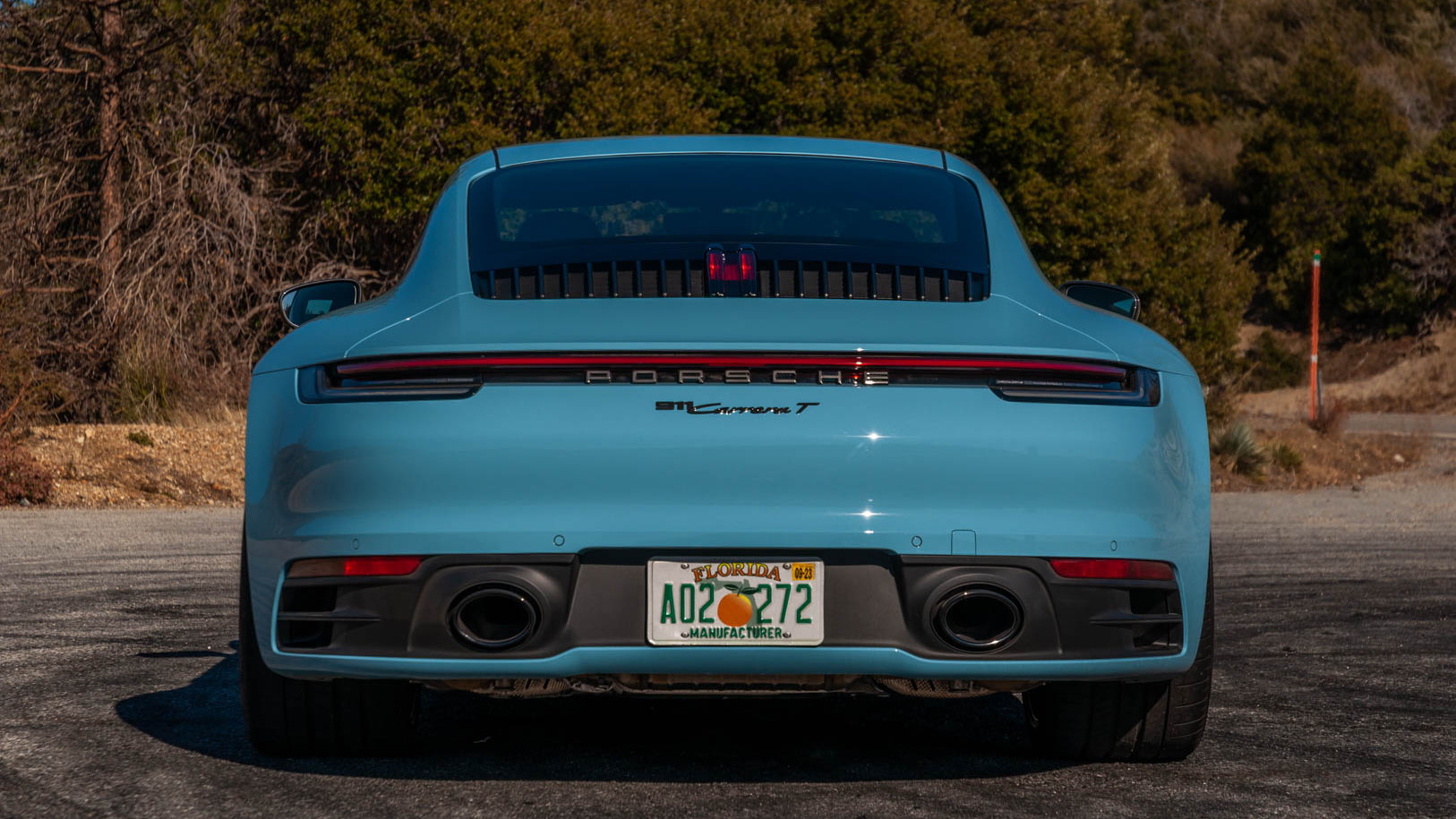 Enthusiasts who don’t want to spend $140,000 on a Porsche 911 can rejoice because the 911 Carrera T is back for 2023. Its build configurator is simple, its packaging is delightfully pure, and at $118,050 (including destination) it borders on reasonably priced. Well, for a 911.

After an afternoon with the 2023 Porsche 911 Carrera T on the winding roads of Angeles Crest National Forest just outside Los Angeles, I can say this is all the 911 the purist needs (though, the 911 Dakar speaks to me), and it makes sense in all the ways enthusiasts claim they care about.

The origin of the 911 Carrera T dates back to the 37th running of the Monte Carlo rally in 1968. The T, which meant Touring and still does, not only made its debut, but won the race.

The concept back in 1968 was the same as it is today: make it lighter, and make it fun.

It took 50 years for the T to return in 2017 with the 991.2-generation 2018 911 Carrera T. Porsche muddied the waters with that model by offering certain options that people didn’t choose.

In a world of 572-hp 911 monsters, the base car’s power output might not seem like a lot, but it’s more than enough to land yourself in jail. Disclaimer: I didn’t land in jail.

After a hot second and about 2,000 rpm the two small turbos kick in and the 911 slingshots forward with linear power delivery all the way to its 7,000-rpm redline.

The flat-6 sings through a gloss-black tailpipes attached to a sport exhaust system with active baffles. Hit the toggle switch on the dashboard to open those valves. Your ears will thank me as they take in the flat-6’s mid-range symphony. That soundtrack is louder than in a base or Carrera S due to less sound deadener and thinner, lightweight glass. After hours of wringing out the flat-6, neither I nor my drive partner had a complaint.

The T comes standard with three pedals (rejoice!). The 7-speed manual transmission is not available on the base 911 and comes as an option on the Carrera S, so the T is the most affordable way to get a manual 911. Porsche even shortened the shifter by 0.4 inch to make it more comfortable to shift, not that I really noticed the delightful shifter’s shorter height.

Porsche spokesperson Luke Vandezande told Motor Authority the last-generation Carrera T had a 70% manual transmission take rate, which was one of the highest both in the U.S. and globally. For those who hate fun, live their lives by the tenths of a second it can save in the 0-60 mph run, and don’t want to #GiveAShift, a quick-shifting 8-speed dual-clutch automatic transmission is a no-cost option.

The T isn’t the quickest 911, but does it really matter? It still hits 60 mph from a stop in just 4.3 seconds with the manual transmission (3.8 seconds with the dual-clutch) and reaches a top speed of 181 mph.

A limited-slip rear differential with torque vectoring capability ripped from the Carrera S is standard. It’s not available on a base 911, and it helps put the power down in a stable fashion while ripping around canyon roads.

The rear-wheel-steering system from the Carrera S can be optioned, but my test car wasn’t fitted with it. While a nice upgrade, it’s not necessary as the car rotates quite well without it, and I wouldn’t spend the money.

Porsche’s carbon-ceramic brakes aren’t available on the latest generation Carrera T despite making an optional appearance on the last-gen model. The reason? The take rate was only 10%. The people have spoken. Besides, the Carrera T is a street-oriented 911, not some GT3 race car. The standard steel brakes never smoked, faded, or even smelled after I spent hours thrashing them at speed up and down the canyon roads.

Porsche throws its PASM sport suspension, which includes adjustable dampers and a 0.4-inch lower ride height, onto the T, and the dampers adjust at the touch of a toggle. While I left them in their softer setting, my drive partner opted for Sport mode. Both settings control body motions without ever becoming too firm or jittery. Angeles Crest’s pavement can undulate in sections, which unsettles less composed suspensions, but the Carrera T just soaked up the road’s unseen imperfections with aplomb regardless of mode. It may be a great canyon cruiser, but the 911 Carrera T feels comfortable enough for a cross-country road trip.

Porsche’s electric-assist power steering is among the best in the business, and the Carrera T’s is no different. Unchanged from the base 911, the precise and direct steering communicates what’s going on at the wheels well through the steering wheel. My fingertips could sense when the rubber was starting to reach the edge of its adhesion. My test car was fitted with the $280 Power Steering Plus option, which makes the steering lighter at slower speeds. I wouldn't spend the money on this option as it artificially boosts the steering assist and doesn’t feel natural in a parking garage. Plus, why pay $280 to skip arm day?

Despite the lack of a big wing and prominent vents, the Carrera T isn’t hard to pick out in a parking lot full of 911s.

It features a 911 Carrera T graphic along the lower portion of the doors and a badge on the rear end. The mirror housings are a contrasting Agate Grey color, which would drive me crazy as dark colors attract rock chips (probably should cover those in a PPF clear shield). The staggered 20-inch front and 21-inch rear wheels are painted Titanium Grey and sport 245/35 and 305/30 rubber in the form of grippy Pirelli P Zero tires.

Inside, the dead giveaway this isn’t a base 911 is the lack of a rear seat. The rear seat delete is standard, though the 2+2 configuration can be added back as a no-cost option. Cutting the rear seat saves 17.6 pounds.

Even the battery is a smaller and lighter unit. It’s that kind of attention to detail the Carrera T aims for and delivers in its pursuit of putting the perfect package together for enthusiasts.

The standard Sport Chrono Package, which is an option on the Carrera S, adds additional drive modes, a drive mode selector to the steering wheel, an analog and digital clock to the center of the dashboard, and active engine mounts.

Porsche swaps in a GT Sport steering wheel that feels natural in the hands and sports a classic look. It’s the perfect diameter, not too small, not too big, but just right. While 18-way adaptive sport seats or light-weight fixed-back carbon-fiber bucket seats are available (I recommend buyers make sure they can get comfortable in the carbon buckets before ordering), my tester featured the T’s standard 4-way power seats with extra firm padding. The seats are finished in an almost mesh-like cloth material Porsche calls Sport-Tex that looks and feels great. With power height and back adjustments and manual fore and aft adjustments, these seats feel like a throwback to simpler times, and they are supportive and comfortable to boot.

All in, the Carrera T is 100 pounds lighter than the base 911, though few, if any, drivers will be able to notice the difference. Enthusiasts will notice, however, that the best bits from the Carrera S (some of which aren’t even standard on that model) come as standard or optional on the T.

With the return of the 911 Carrera T, Porsche has packaged a sports car that makes performance, and enthusiast options, simple to obtain. It’s certainly not cheap, but it’s a value in 911 land. It may be about saving money, but I’d personally recommend ponying up $11,430 for my tester’s Paint to Sample Gulf Blue paint. Chef’s kiss.

Porsche provided access to a 2023 911 Carrera T for an afternoon on great roads for Motor Authority to bring you this firsthand report.