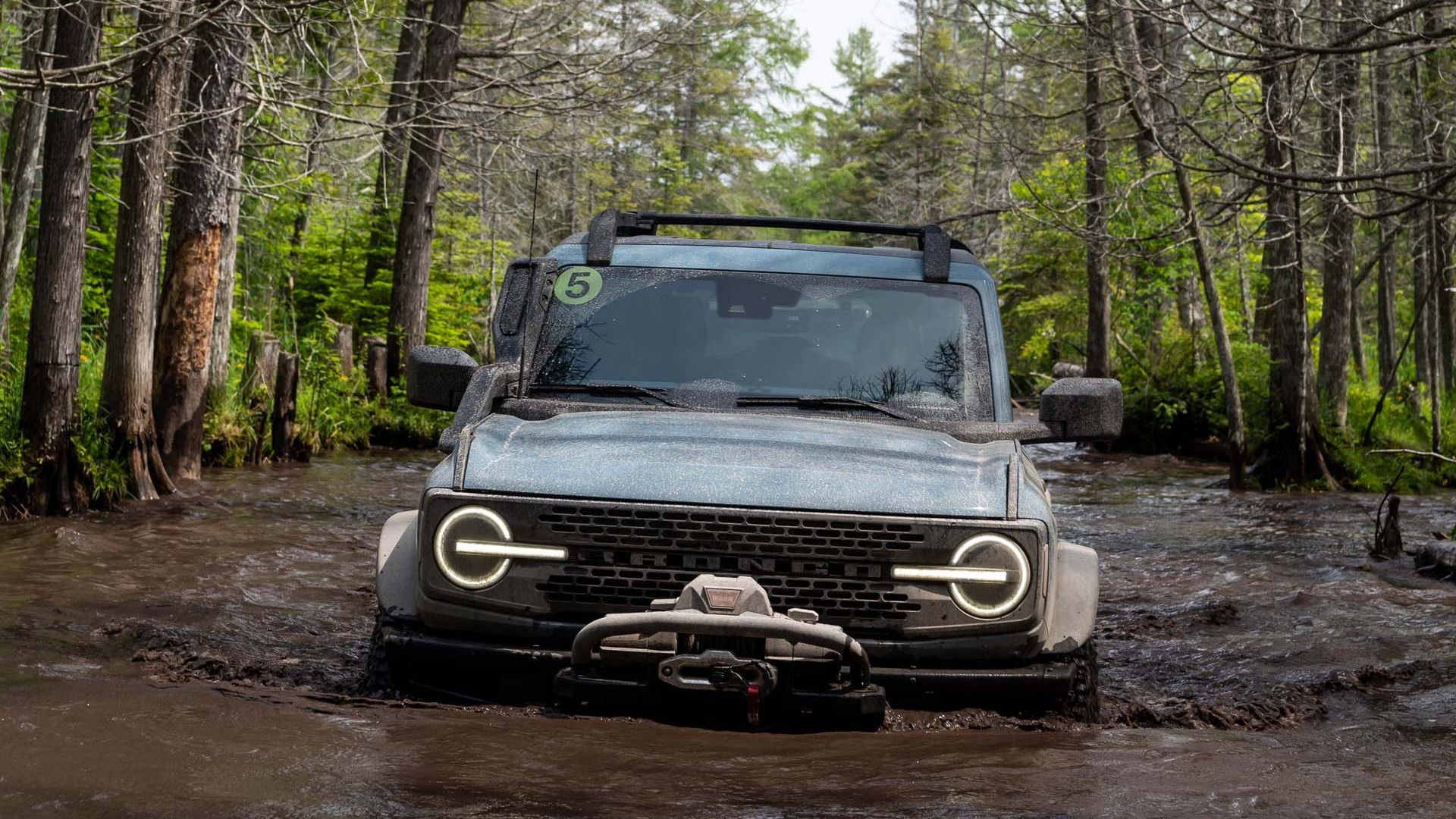 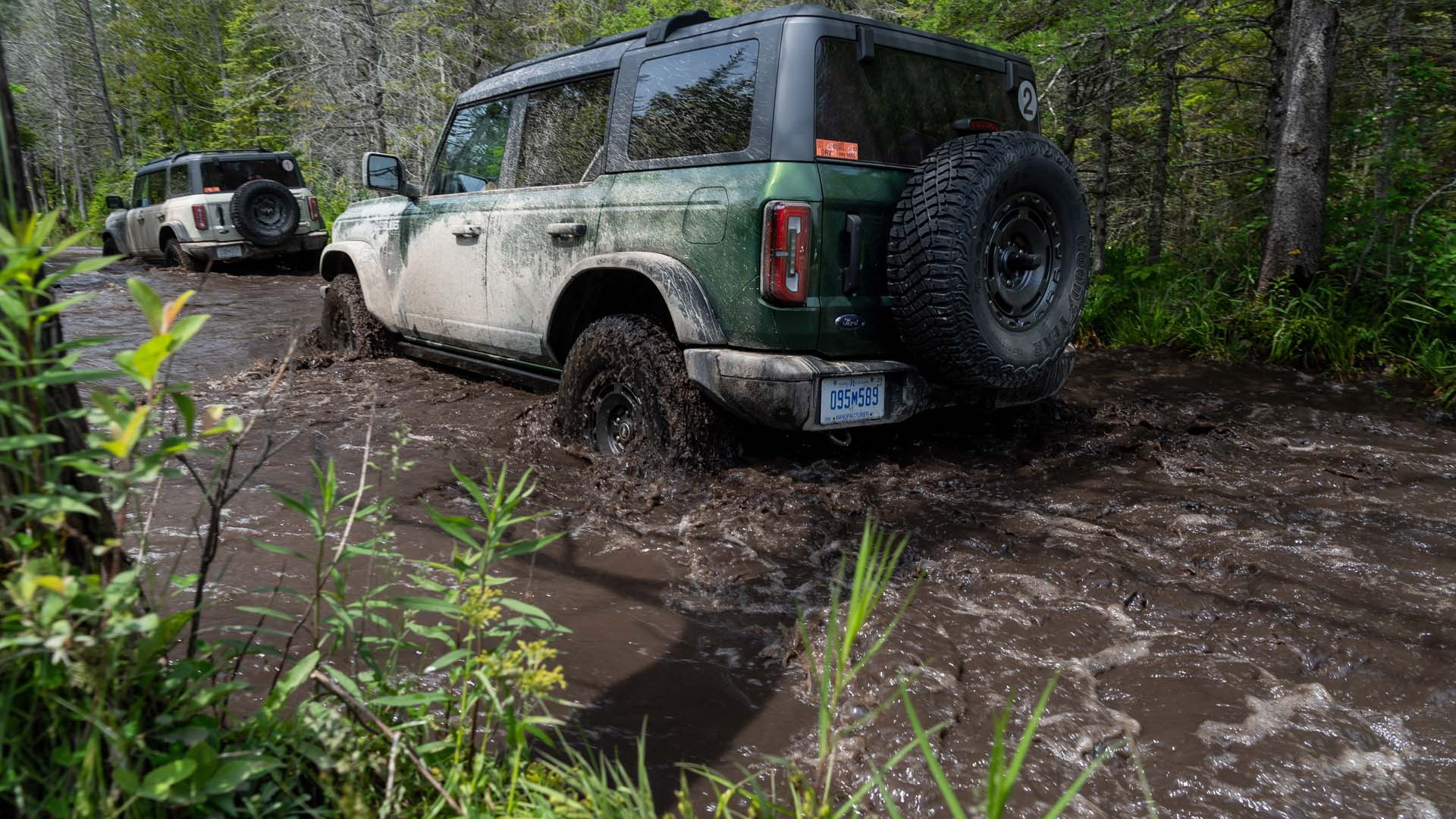 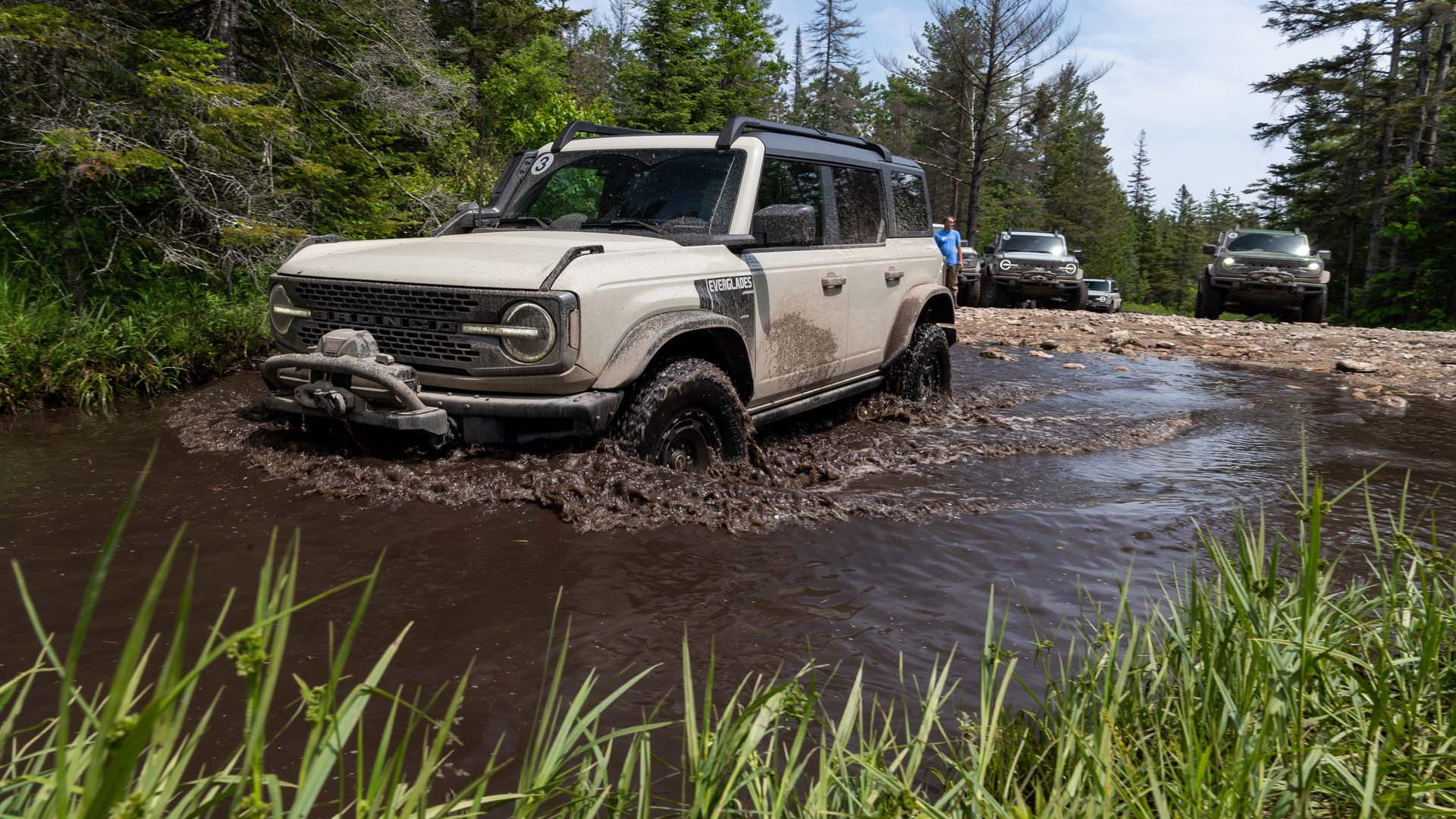 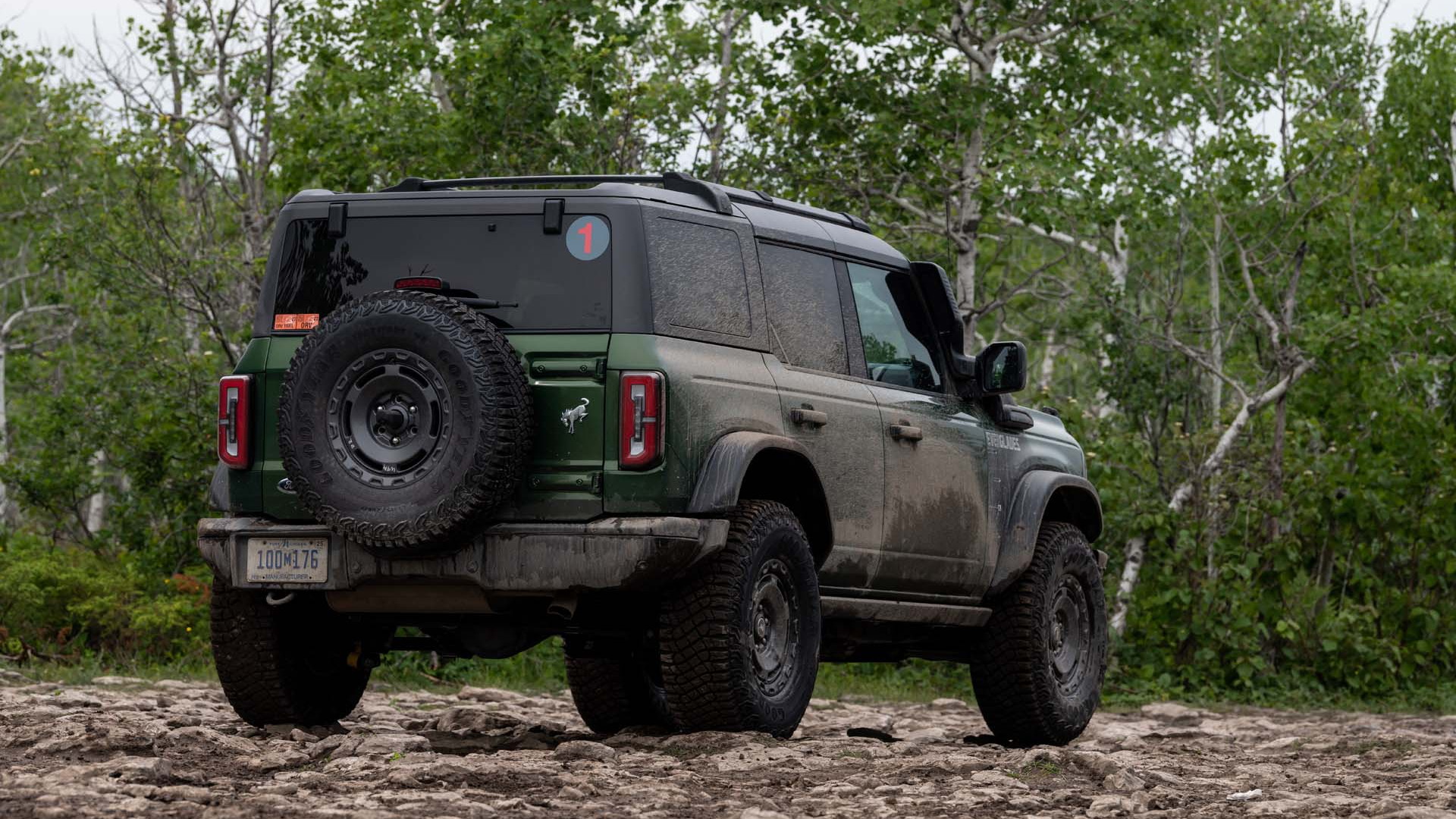 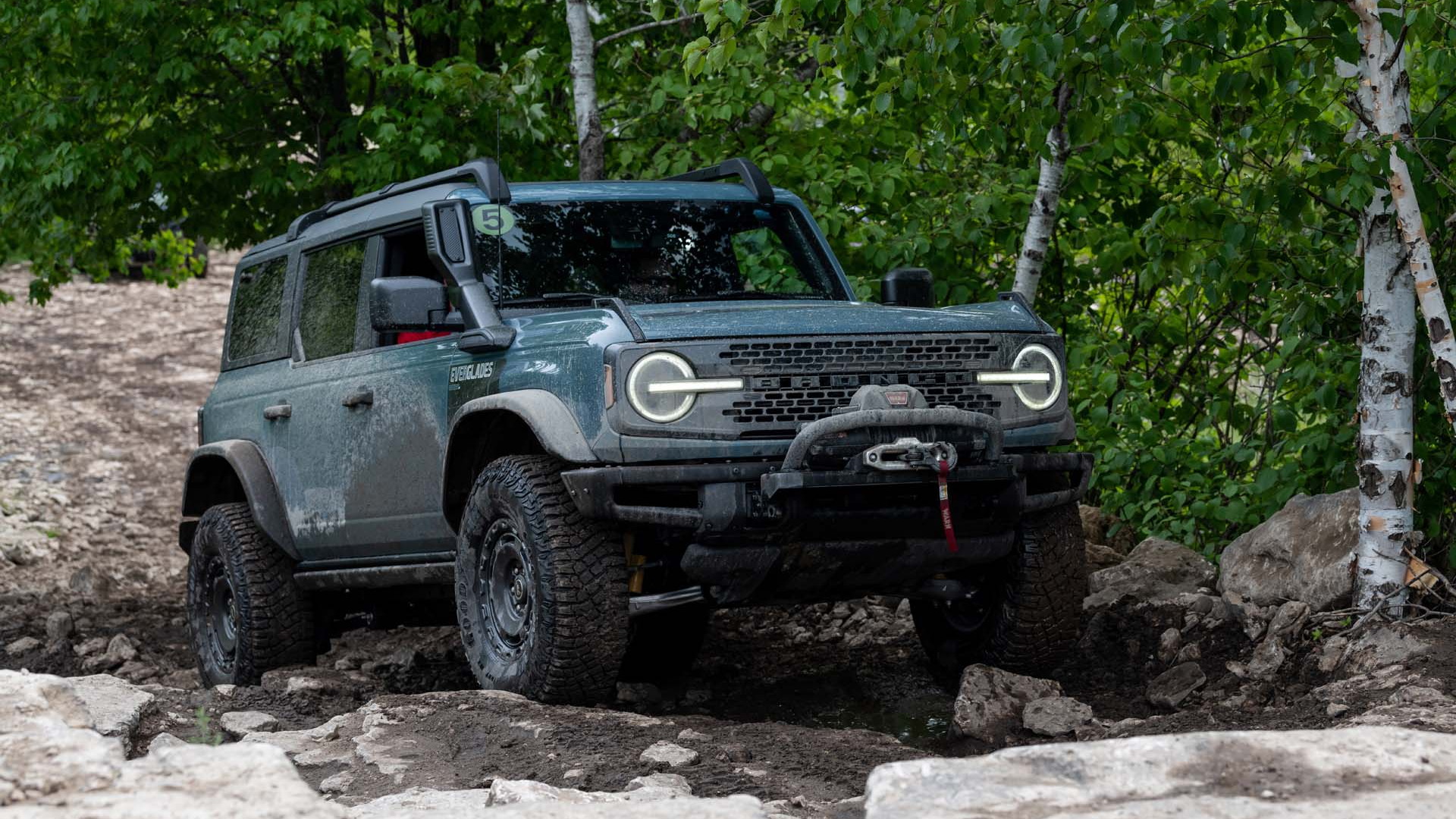 The radio crackled, “We got a winching opportunity!”

A downed tree blocked the trail, giving us a reason to tap one of the 2022 Ford Bronco Everglade’s core capabilities. It was time to use the Bronco Everglades the way it was meant to be used.

The addition of the $54,595 (including a $1,595 destination fee) 2022 Ford Bronco Everglades to the lineup gives the already capable Bronco the ability to wade into deeper water and handle mud better than than every Bronco but the more expensive and more powerful, Bronco Raptor. It can also pull itself over obstacles or up hills and get itself unstuck thanks to its standard winch.

In a day-long adventure on Drummond Island, Michigan, it became clear that the Everglades has its place in the Bronco toy chest.

The backing plate on the Everglades' snorkel can be removed with three screws and moved to the rear (or front) of the snorkel depending on the wind, the actvity, and whether someone wants to hear more or less of the turbocharger huffing.

The most notable feature of the Bronco Everglades is the snorkel mounted along the passenger-side A-pillar. It raises the air intake inlet and feeds into a new intake system through a hole in the front fender.

Sorry non-Everglades owners, the snorkel isn’t a plug-and-play part that you can simply add to your Bronco. However, Bronco program manager Mike House did tell Motor Authority the team is looking at how it could offer a snorkel setup through the Ford Performance accessories division.

The snorkel is important, but it’s not the only element that raises the Everglade’s water fording capability to an impressive 36.4 inches from the 33.5 inches of other Broncos with the Sasquatch package. The driveline’s vent tubes help as well. Ford raised the transmission, front differential, and transfer case vent tubes 3.4 inches and the rear differential’s vent tube 2.2 inches.

For those keeping track, a non-Sasquatch Bronco can ford 31.5 inches of water and a Braptor can roll through 37.0 inches of water, but the latter is mostly due to the massive 37-inch tires.

The Everglades fits between trees and down trails a Braptor simply can’t due to the desert runner’s added 8.6-inches of width. Size does matter, kids. Drivers need to ensure they choose the right tool, or in this case Bronco, for the job.

Equipped with the Sasquatch package standard, the Everglades has full-time four-wheel drive, locking front and rear axles, a suspension that’s lifted 1.2 inches (from the base Bronco) and uses Bilstein dampers with end-stop control valves, a 67.8:1 crawl ratio, and 35-inch Goodyear Mud Terrain tires, along with skid plates for the engine, transfer case, and fuel tank.

“We have a winching opportunity!”

That’s how a downed tree blocking the trail was viewed while on the trails in the 2022 #Ford Bronco Everglades. pic.twitter.com/uBjoVcUT6N

That downed tree didn’t pose a problem because the Everglades features a Warn Zeon 10-S winch with a 100-foot synthetic line mounted to the front bumper. The winch is controlled by a 12-foot wired remote. Vehicle Dynamics Engineer Chris Berchin said the wired remote provides more immediate response compared to wireless remotes, which are less precise and have a slight lag in response to control inputs.

The Everglades can perform its own recovery or move a tree off the trail to clear the way for less-capable off-roaders. We cleared the way twice, but never needed to perform a recovery as the Bronco was seemingly unstoppable during our day-long adventure.

Notably, Ford went so far as to crash test the Everglades with the winch to ensure everything would be up to snuff safety wise. This is the advantage of factory integration.

In a heritage nod to the original Bronco the Bronco Everglades features squared off fender flares rather than the Bronco's standard rounded flares.

Also improving the Everglade’s capability are standard rock rails, a roof rack with crossbars, a small bull bar, a steel modular bumper with removable end caps, and the same steel bash plates found on the Bronco's Black Diamond model, upon which the Everglades is based. It also sports unique fender flares with a less-rounded design.

Inside, the Everglades features a 12.0-inch touchscreen versus the 8.0-inch unit found in the Black Diamond Bronco, marine-grade vinyl seats with wide, comfortable cushions that are easy to wipe down, and rubber flooring with drains that make cleanout quick.

The Bronco’s base 2.3-liter turbo-4 with 300 hp and 325 lb-ft of torque is the only engine option and it’s hooked to a 10-speed automatic transmission. It makes more than enough power both on the street and off-road. Not once in my nearly seven hours of mud bogging, water fording, and rock crawling did I want for power.

As we approached a section of the trail that looked more like a river the radio squawked, “we got a Jeep.”

A JK Wrangler was headed our way through the water, which must’ve been about three feet deep, give or take. The Jeep was on silly large wheels with all-terrain tires and was moving through the water very slowly. Once through, the Jeep turned around and ran the same path back, as if to say, “I’m here too, Guys.” Cute.

In bone-stock, factory-built Bronco Everglades on 17-inch wheels wrapped in 35-inch tires, we drove through this river-like trail at as quick a pace as we could without damaging the trail. We aimed to tread lightly. Nature is beautiful, don’t destroy it as you enjoy it. Even modified, the Jeep may not have been able to handle our pace.

At $54,595, the Bronco Everglades costs $2,940 more than a comparably equipped Black Diamond model. The winch alone, which wouldn’t have Ford’s tweaks to it, retails for $1,807, according to Warn spokesperson Andy Lilienthal, and that doesn’t include installation or a winch mount. Then there’s the snorkel and its air intake integration, safety systems integration for the winch, and factory warranty. That’s before addressing the raised breather tubes for the drivetrain, which really matter, the 12.0-inch touchscreen not available in a Black Diamond, and upgraded lighting.

The Everglades isn’t just a break-even proposition if this is the type of setup a Bronco buyer wants. It’s actually a fair deal out of the box. Though, for 2022 it’s exclusively available for current reservation holders. Ford wouldn’t comment about Everglades availability for the 2023 model year.

With the addition of the Raptor and Everglades, the Bronco lineup now consists of eight models. But the Everglades earns its place. It lets you go deep into nature, enjoy it, recover yourself or others safely, and do it all with a factory warranty.

Ford paid for airfare, a 2-star hotel, and off-road access for Motor Authority to bring you this firsthand report and swat massive black flies on the trail.