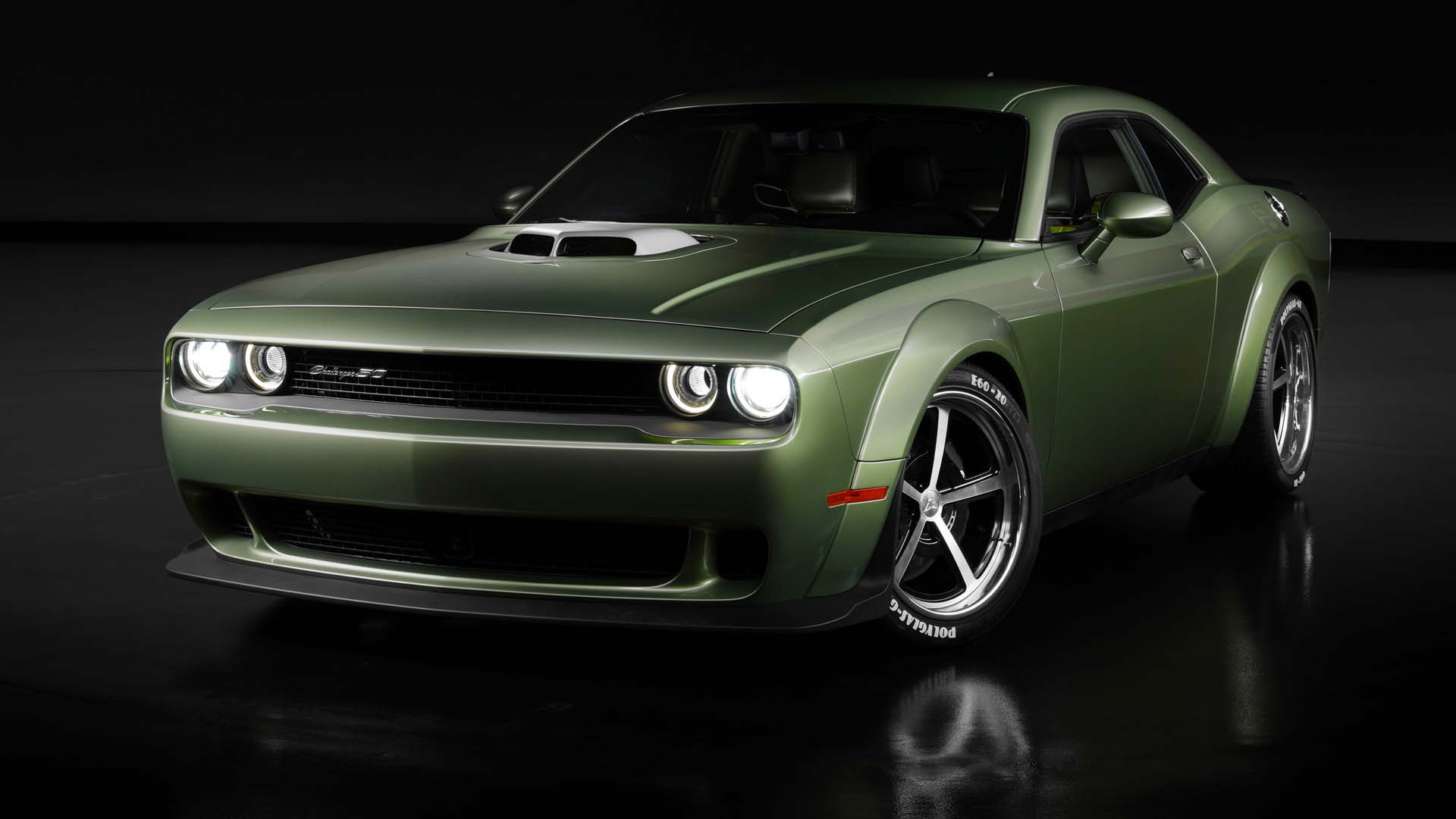 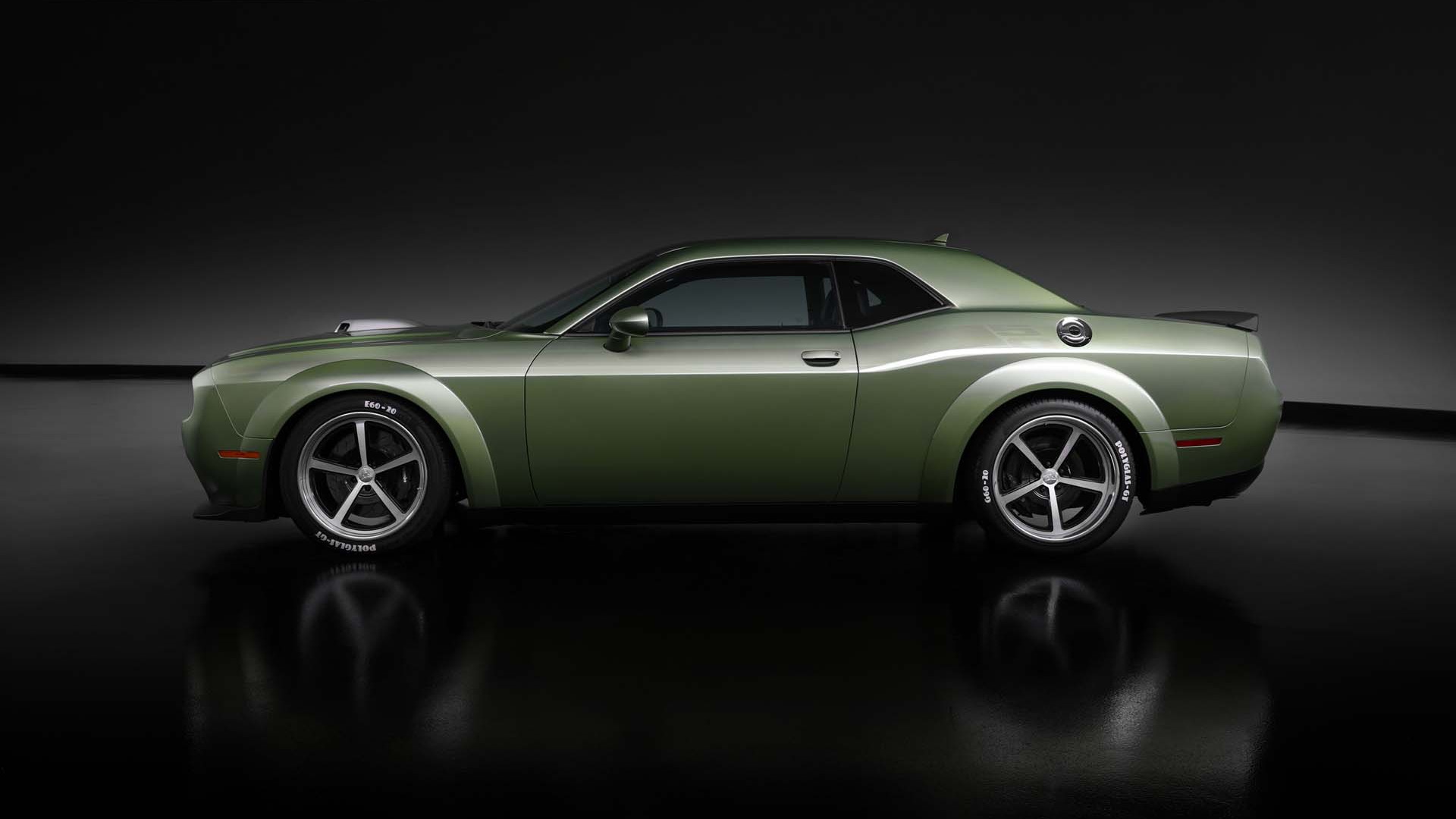 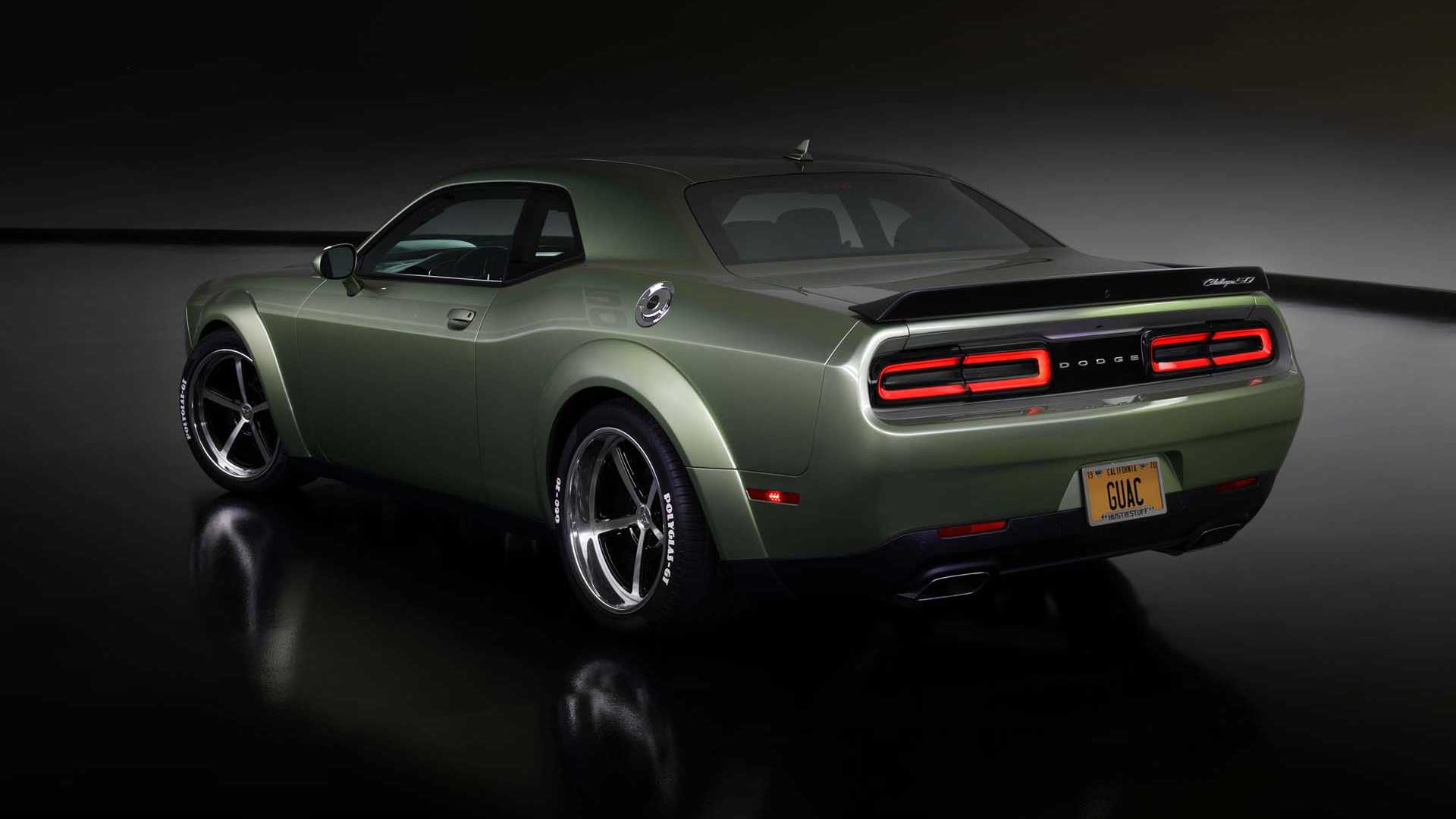 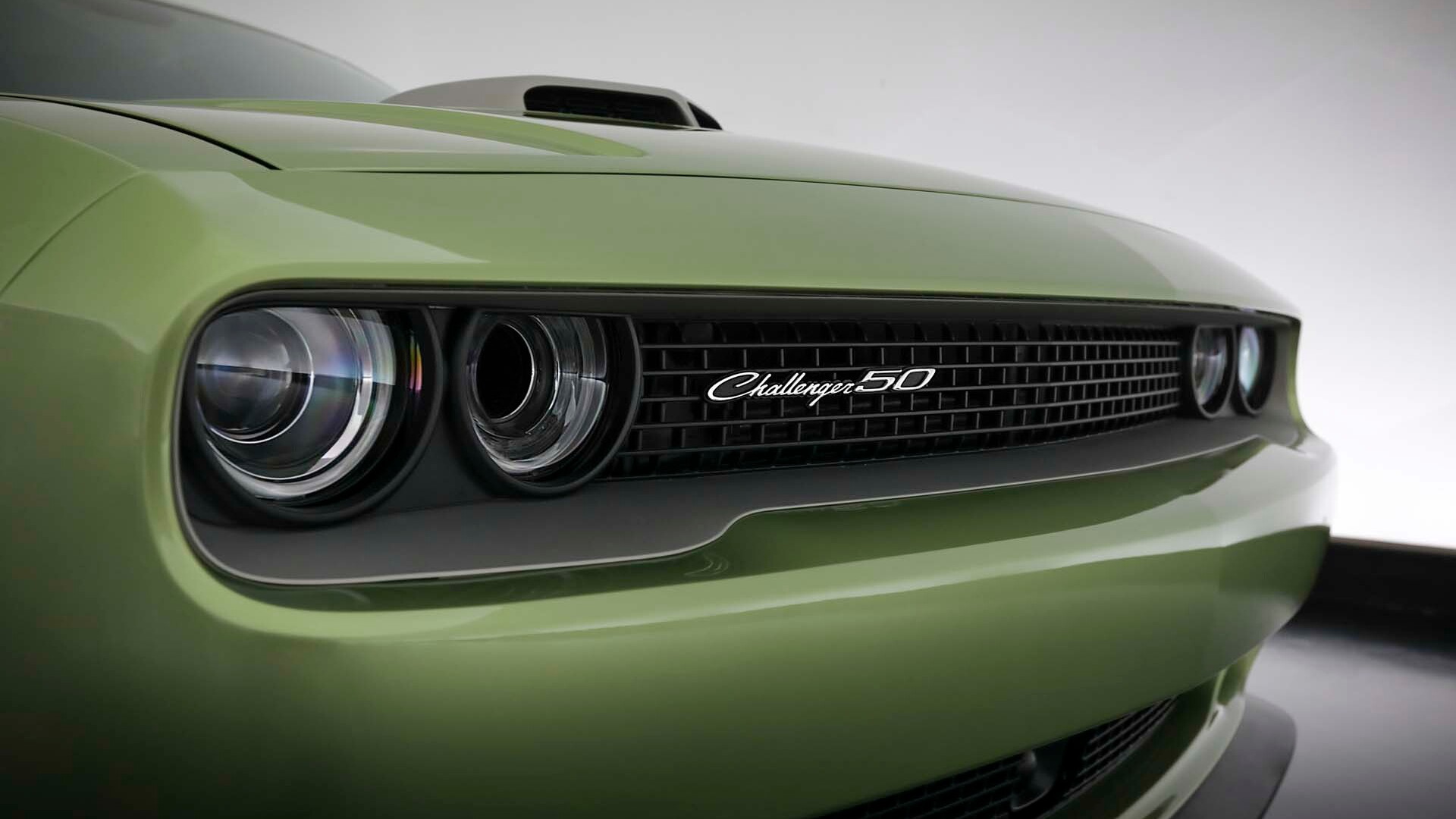 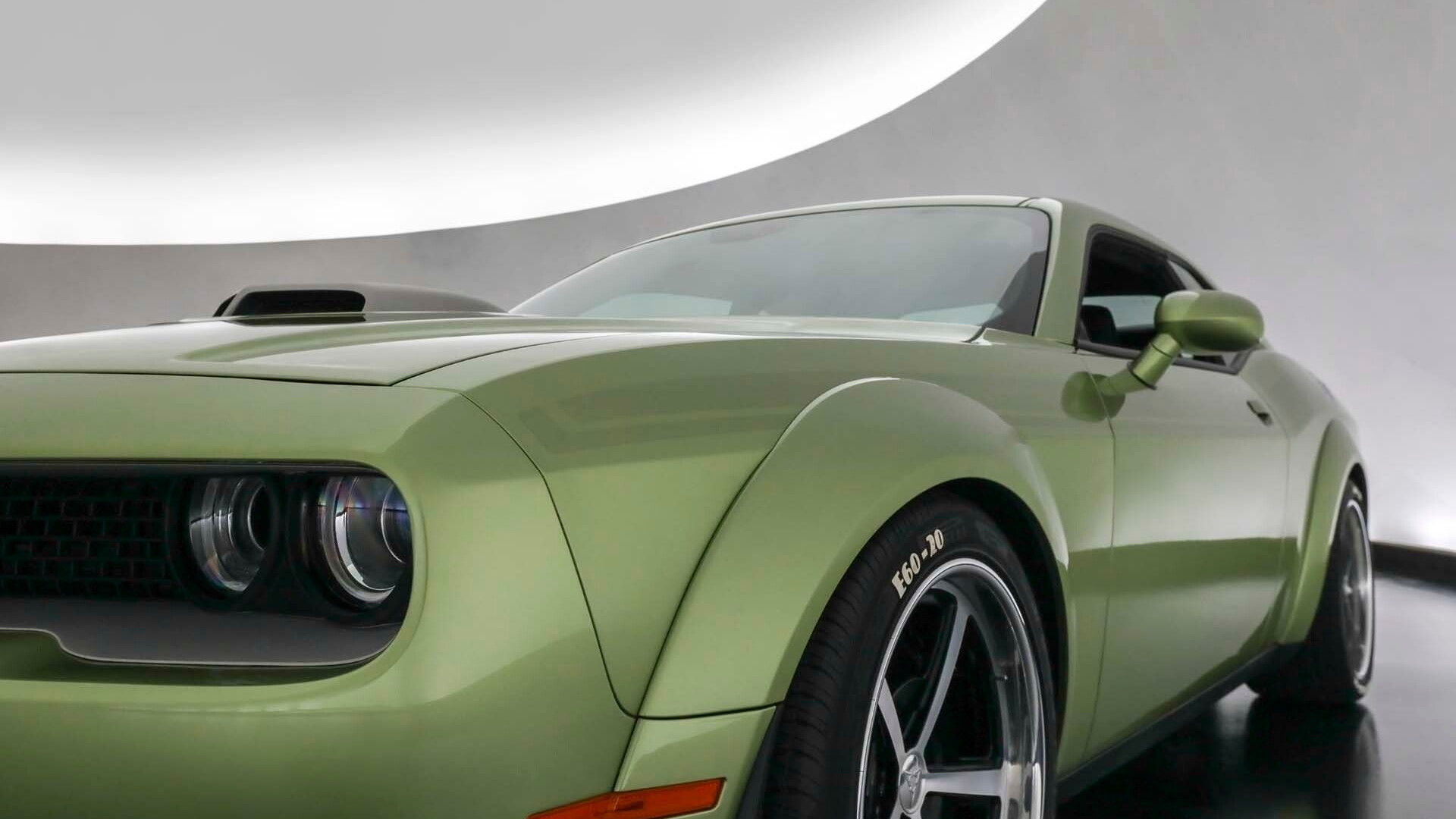 The annual tuning fest that is the SEMA show returns next week and one of the busiest stands will be the one from Mopar, the official aftermarket division of Stellantis.

This year, Mopar has readied seven custom rides to provide inspiration to tuners and preview many of the accessories it has on offer.

Dodge Challenger Holy Guacamole concept: The Challenger is definitely long in the tooth but it remains as desirable as ever. Dodge has made this clear with a guacamole-themed 2020 Challenger R/T Scat Pack Widebody 50th Anniversary that features retro cues taking us back to the 1970s. We're talking wood panel dash accents, plaid trim on the doors and seats, and a touch of gold on the hood scoop. The exterior paint is a custom color called Rotten Avocado, and we wouldn't be surprised if it's made available on a special-edition Challenger at some point.

Jeep Wrangler 4xe concept: The Wrangler is one of the most popular vehicles to customize, so it's no surprise to see it on this list. For its SEMA show stand, Mopar has taken a Wrangler 4xe and fitted it with factory-backed parts and accessories from the Jeep Performance Parts bin. Key items include a 2.0-inch lift kit with Fox shocks specially tuned for the plug-in hybrid Wrangler. There are also beadlock-capable wheels with functional beadlock rings. These are wrapped in 37-inch BFGoodrich KM3 tires. A hinge reinforcement allows a full-size spare wheel and tire to be mounted at the rear.

Jeep Wrangler Overlook concept: This Wrangler concept shows how the popular off-roader can be built for comfort and style. It measures 12 inches longer at the rear to enable a third row of seats to be squeezed in, and the roof has also been raised by about 5 inches to give everyone ample headroom. The interior is lined with black Katzkin leather, which features on the seats and the dashboard, while exterior modifications include a steel front bumper and 20-inch Black Rhino York wheels wrapped in 37-inch BFGoodrich KM3 tires.

Jeep Grand Cherokee L Breckenridge concept: The new Grand Cherokee L three-row SUV also served as the basis for a Jeep concept. This one features a custom two-tone exterior combining matte and metallic elements for a premium look. The vehicle also sits on 21-inch Mopar wheels and features a Thule storage box mounted on Mopar roof racks. The premium theme carries inside where you'll find blue leather for the seats and doors, in combination with satin walnut dash accents.

Ram 1500 TRX RexRunner concept: Mopar is out to show that the 702-hp Ram 1500 TRX can be the basis for a capable desert racer, with its RexRunner concept. The stock TRX already has all the power one needs to ascend the dunes so Mopar focused on improving the pickup truck's capability. Key upgrades include 18 Black Rhino Chamber wheels wrapped in 37-inch Goodyear tires. There are also rock rails and skid plates, with the front skid plate helping to increase the approach angle by 2.3 degrees up to 32.5 degrees.

Ram 1500 Outdoorsman concept: With its 1500-based Outdoorsman concept, Mopar is demonstrating how the popular workhorse can easily be transformed into a lifestyle vehicle. A bed rack system lets you mount oversized items above the vehicle, while an Expertec bed-slide system provides rolling panels (each rated at 2,000 pounds) to store various tools and gear. A Mopar RamGate task-bench fits on the tailgate alongside a custom T-rack mounting system. There's also a 2.0-inch lift kit with Fox shocks, plus 20-inch Black Rhino wheels wrapped in 35-inch Continental tires.

Kaiser Jeep M725 concept: It won't be all new vehicles on Mopar's stand. Also set to appear is this 1967 Kaiser Jeep M725 military ambulance which has been transformed into an off-road vehicle that we could imagine being used by first responders. It's powered by a modern 6.4-liter V-8 that delivers 485 hp to all four wheels via a vintage TorqueFlite 727 automatic transmission. It has also been fitted with 20-inch Black Rhino Armory wheels that are wrapped with massive 40-inch tires. A highlight is the custom-designed roof panel over the cargo area that can raise 16 inches, creating enough room for occupants to stand, for example during emergencies.

The SEMA show runs Novemner 2-5 in Las Vegas. For more coverage, head to our dedicated hub.