My ears are treated to a deep, gratifying low rumble that reminds me that this Cadillac is a 2021 CT5-V, the souped-up version of what’s now the largest sedan the brand offers.

However, that initial smile fades as I contemplate what this car really represents: This generation of Cadillacs may be the swan song for the brand’s vehicles powered by internal combustion engines.

It’s almost shocking to think that OEM known for being the Standard of The World due to its engineering prowess will become just one more luxury electric-vehicle brand.

Of course, the electric vehicles of the future will be nearly silent, faster, smoother, and cleaner than those we see today. Being kinder to our world by no means is a bad idea.

Consider that 1974 was the last year for leaded fuel, and for 1975 cars including Cadillacs were equipped with catalytic converters and an advanced exhaust emission control systems.

Believe it or not, 1975 has more than a few similarities to 2021, and concern over the environment is just one. The exit from the Vietnam war spawned Operation Babylift. INASA launched its first probe of Mars, Viking 1. Also, the Watergate scandal sent people to prison, the last naturally occurring case of smallpox was diagnosed and treated, Microsoft was a start up company and "Wheel of Fortune" made its television debut. 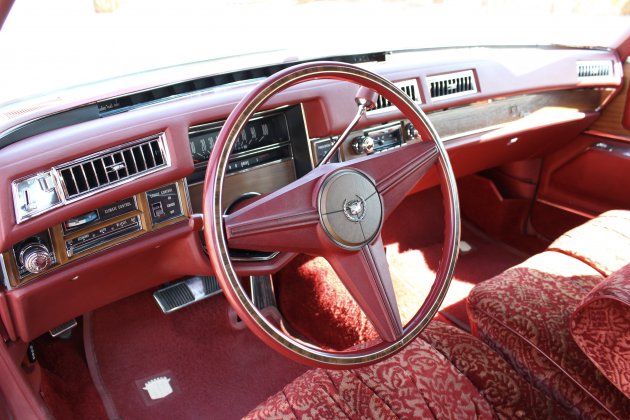 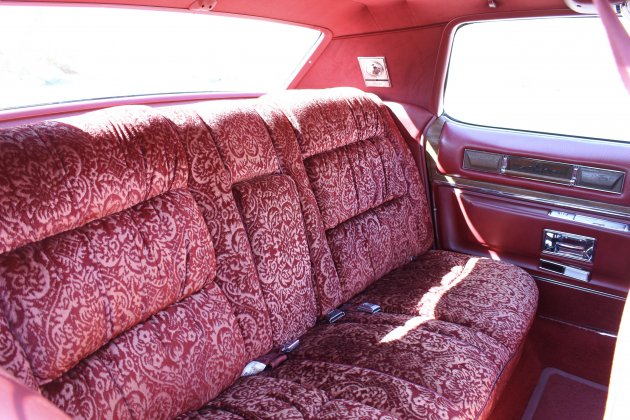 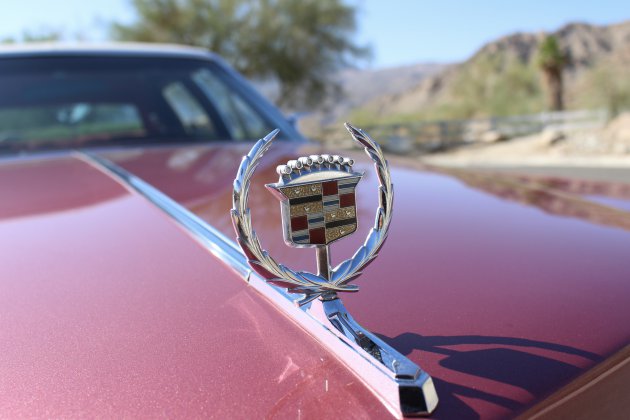 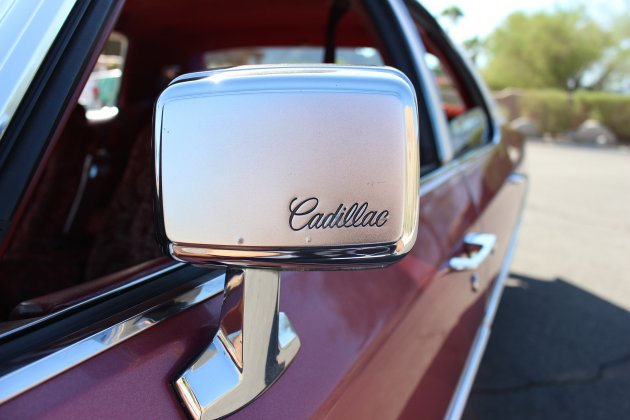 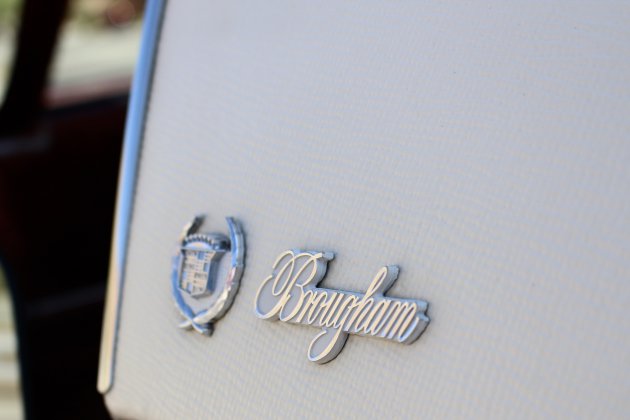 Despite any coincidences, nobody will confuse the 2021 Cadillac CT5-V with the 1975 Cadillac Fleetwood Brougham.

Cadillac built its reputation on innovation and luxury. The 1975 Cadillac Fleetwood Brougham came into being with features galore and a wide range of options. Just the fully padded vinyl roof alone had 14 different color options and two choices of texture, including Elk Grain. The paint was offered in 21 colors, including the Cerise painted car in our story. The interior’s plush, pillow-top upholstery delighted customers with a variety of both colors and patterns.

In other words, customers could spec out a new model with the knowledge that these premium cars were not all cookie-cutter products. A Cadillac buyer could pick some of the more esoteric trims and be confident that visually this would be rather unique.

Unlike the sedans of today, the 1975 Cadillac Fleetwood Brougham was truly massive. It dwarfs the CT5-V. It stretches 233.7 inches, and there’s so much room inside that fold-down footrests are provided for the back seat. 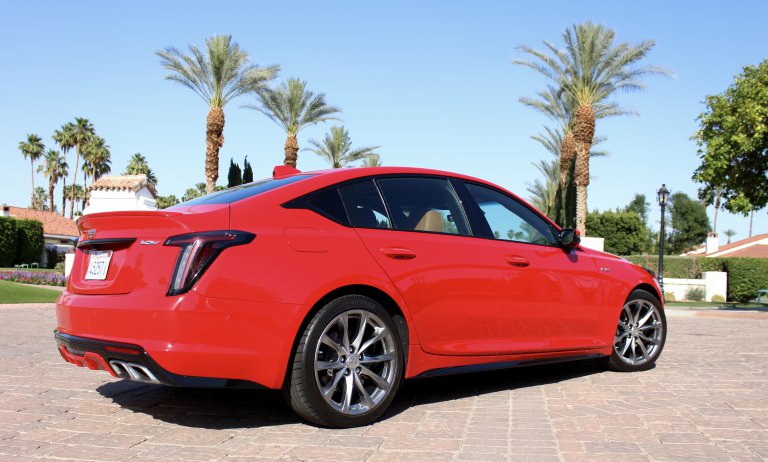 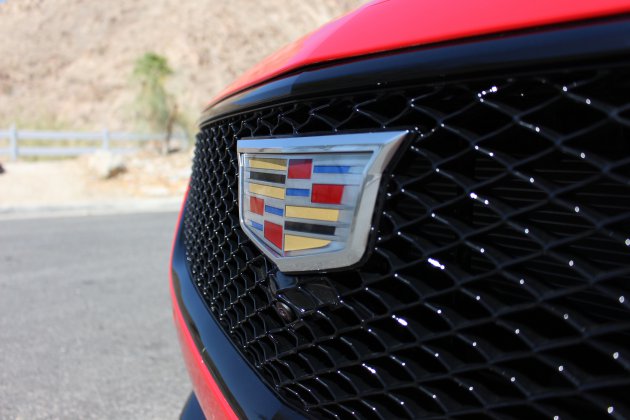 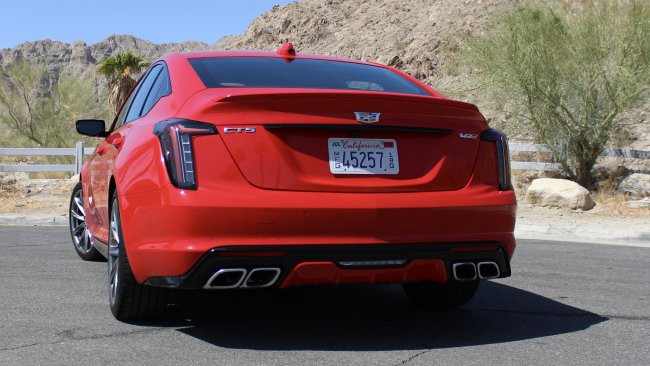 The 2021 Cadillac CT5-V, like numerous modern cars, incorporates many of the standout features from 46-years ago. However, these are now commonplace, and consequently don’t generate much of a buzz. In fact, many of these are to be expected.

To offset the bulky, body-on-frame construction of the earlier Cadillacs and the performance =obbing effects of emission control devices, under the hood resides an 8.2-liter overhead cam V8 with a Rochester four-barrel Quadrajet carburetor. On paper, this sounds impressive. However, it cranks out just 190 horsepower at 3,600 rpm. At 360 foot-pounds at 2,000 rpm, torque is sufficient to counter-act the car’s weight.

The Fleetwood would cruise from 0-60 in a very leisurely time of nearly 13 seconds and topped out at 114 mph. The emphasis was on smooth luxury.

Cadillac did achieve the goal of making an enormous auto easy enough to drive around town and comfortable over interstate travel, albeit this does tend to noticeably sway around corners.

The Fleetwood Brougham requires little to no steering effort, as the power steering is so highly boosted. The effortless steering is matched with no road feel. Complete isolation was the goal. The ultra-soft suspension doesn’t help in driving dynamic, neither does the seating, which is more akin to a sofa.

Since then, our definition of what a car, even a luxury car, should be has radically changed. Luxury and performance do not need to be mutually exclusive. The 2021 Cadillac CT5-V is a perfectly good example of that. This has both a comfortable ride and a vast array of features. However, this has a wild side lurking just under the driver’s foot. 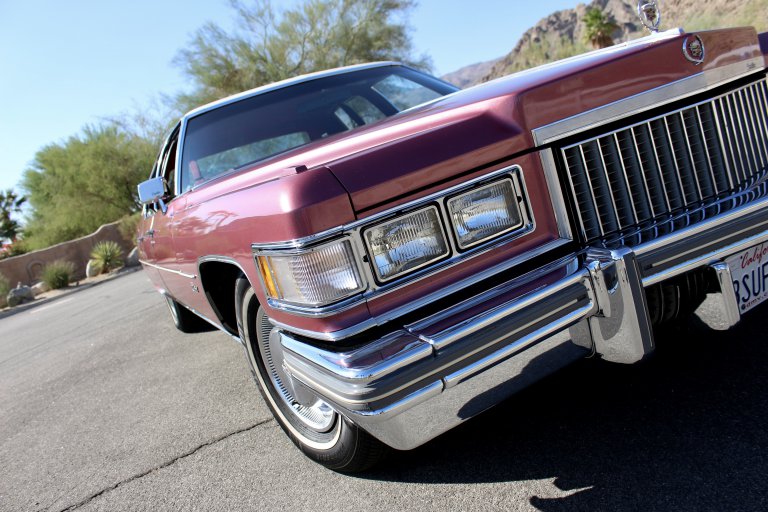 The overall length on the CT5-V is a reasonable 193.8-inches, nearly three feet shorter than the 1975 Fleetwood.

Power and being considerate of the environment do not need to be mutually exclusive, either. EPA have continued for reduce emissions and other regulations have steadily improved fuel economy. The CT5-V is a powerhouse yet can still manage 21 mpg in the city and 27 on the highway. It’s doubtful if the 1975 could achieve that going downhill with a tailwind. Technology is taking today’s internal combustion machine to heights that were unimaginable a few decades ago.

One of the other standout engineering marvels at GM is the Magnetic Ride Control 4.0 suspension, which also is found on the Chevrolet Corvette. The latest, fourth generation of this is up to 45-percent faster at damping response compared to the prior version. This has a MacPherson type strut set up in the front and a five-link, independent rear with a stabilizer bar. Not only does this provide compliance on poor road conditions, but it stiffens for driving in an enthusiastic manner. Coupled with the variable effort steering, standard fat 245/40R19 summer-only, run-flat tires, the 2021 CT5-V is not giving up much to full-bore sports cars.

The 1975 Fleetwood came out of the box with a three-speed automatic transmission while the 2021 CT5-V comes standard with a 10-speed automatic with paddle shifters for manual controls. It also has five driver-selectable modes that allow variation on the transmission, steering and suspension.

Enticing customers with a power antenna from years ago does sound archaic and a bit funny in comparison to what the 2021 Cadillacs offer. Beyond the vast number of standard features, the CT5-V this comes complete with the Premium Package that includes an expansive Ultraview sunroof, semi-aniline leather seats, and the parking package. The Technology Package and Driver Assistance and Advanced Security Package folds into the Cadillac adaptive cruise control, reverse automatic braking, and theft deterrent alarm system with sensors for inclination and interior vehicle movement. The Driver Awareness Package also has Intellibeam — auto high beam (a descendent of the Guidematic), following distance indicator, and lane keep assist with land departure warning.

Easily one of most helpful features available (and not on this specific car) is the Head-Up Display, allowing drivers to focus more on the road ahead. In all of the V models it should be a no-brainer to include this, as these are performance-oriented machines. Little doubt this was a bean-counter decision.

My butt locked into the 18-way power-adjustable seat (driver and passenger), which includes 4-way power lumber controls. Cadillac is constantly reminding me that I can do far more than navigate this like the retired senior citizen customer clad in white shoes and belt from decades past. Yes, in a sedate fashion, this gets from point A to B in a civilized manner. However, if that’s really the goal, it’s unnecessary to get any V-Series Cadillac.

The CT5-V is no Corvette, but it does hold twice as many occupants and still can offer confidence inspiring sprints and cornering. In fact, this is the kind of car that will get you in trouble. Not because it misbehaves, but rather the police don’t take kindly to tearing up the boulevard like an unrestrained teenager. Sure, this can leave rocket to triple-digit speeds in a blink, whereas Cadillacs of yore would struggle getting up to speed. There is true pleasure in any grocery run.

Even though the CT5 models are the large sedans in the Cadillac lineup, these seat four, not six. The trunk is able to swallow a few golf bags, not half-a-dozen corpses. And, 21 percent of this modern Cadillac is made in China, which was definitely not the case in the ‘70s. As such, the CT5 and the Fleetwood are really worlds apart.

While the styling has dramatically changed, the 1975 Fleetwood Brougham and the 2021 CT5-V are like bookends to a greener, cleaner world. The writing is on the wall, this could be the end of an era, the last chapter in the love/hate relationship of the gas-powered Cadillacs.

This article, written by John Grafman, was originally published on ClassicCars.com, an editorial partner of Motor Authority.