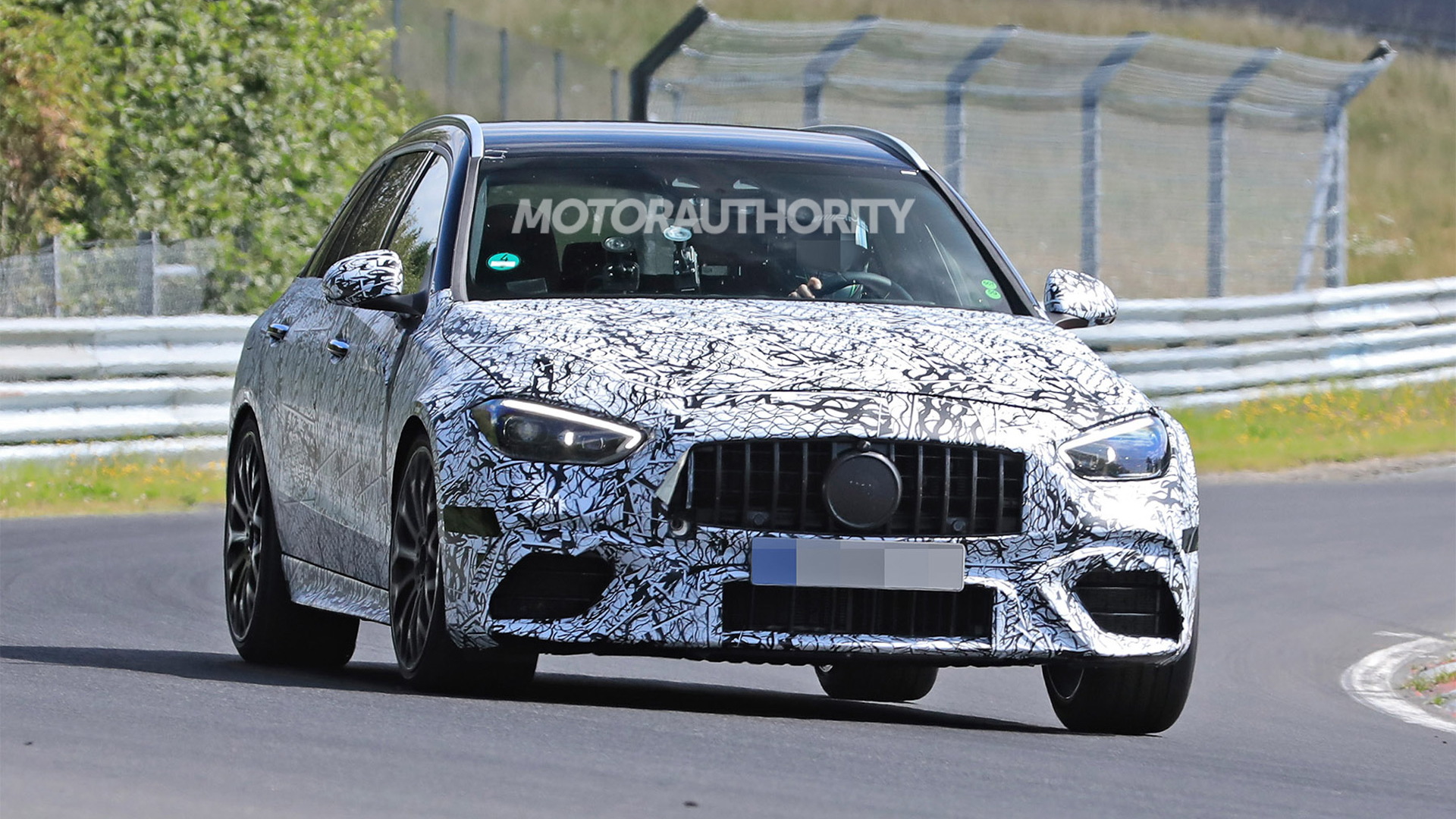 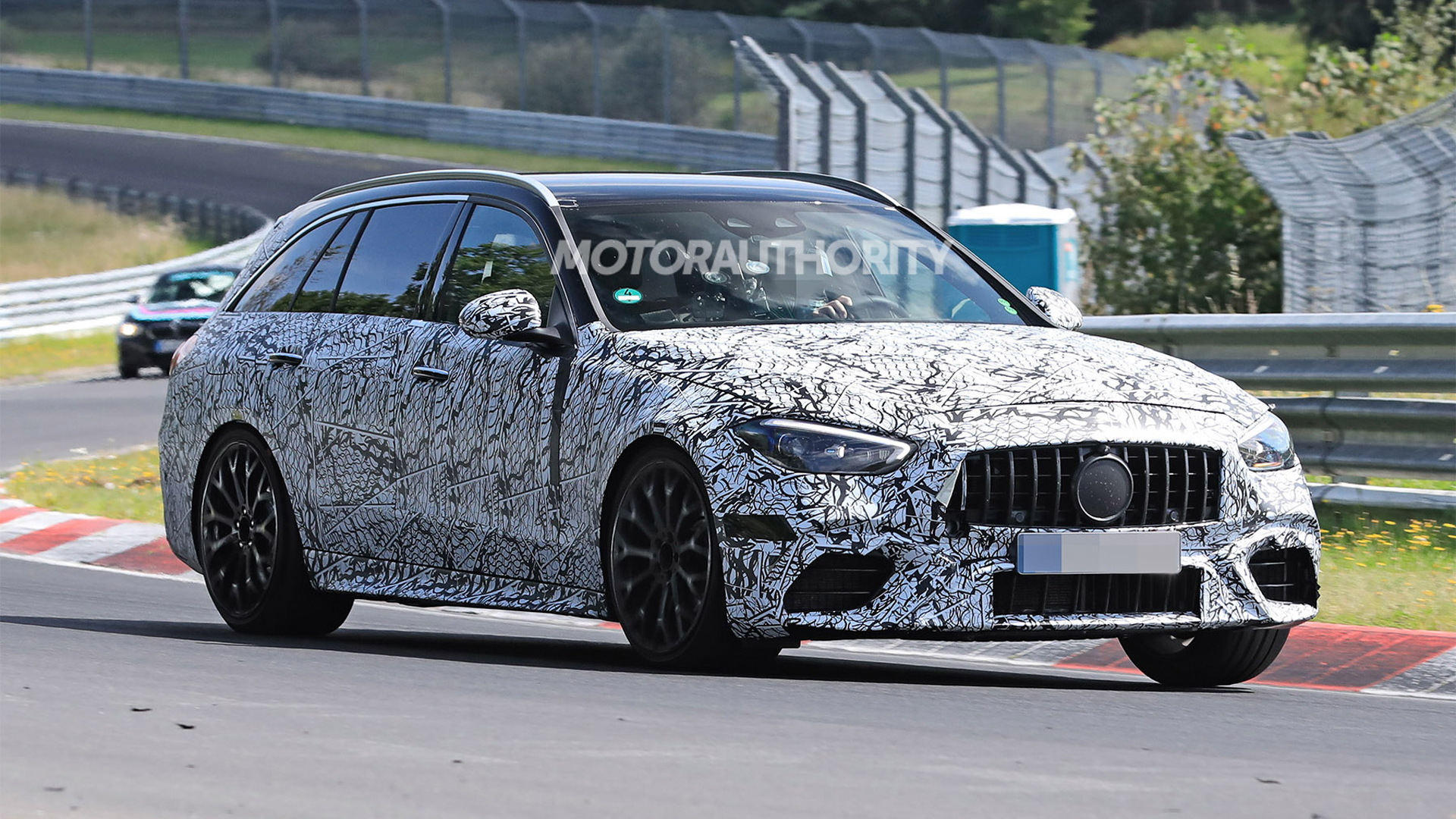 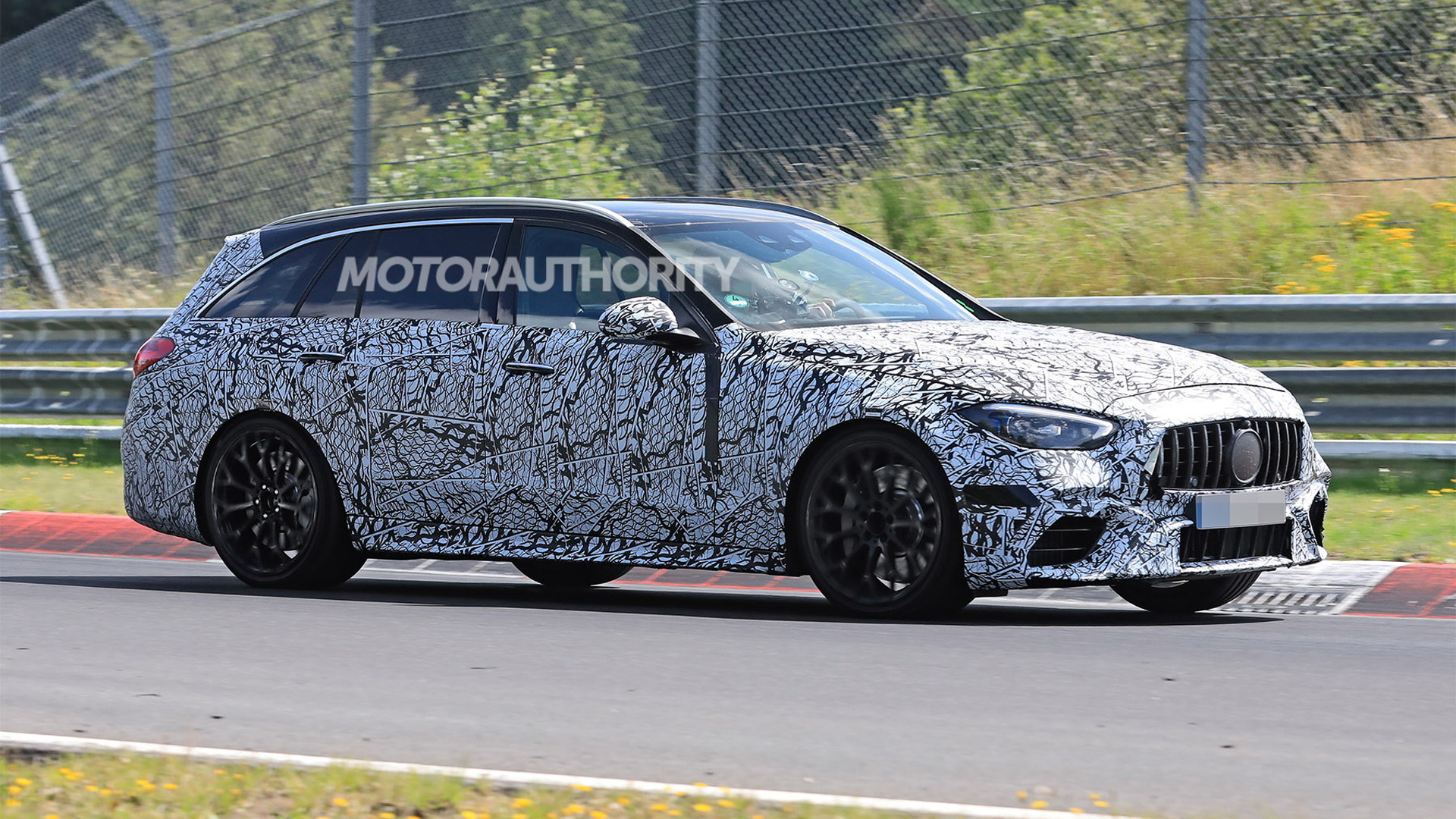 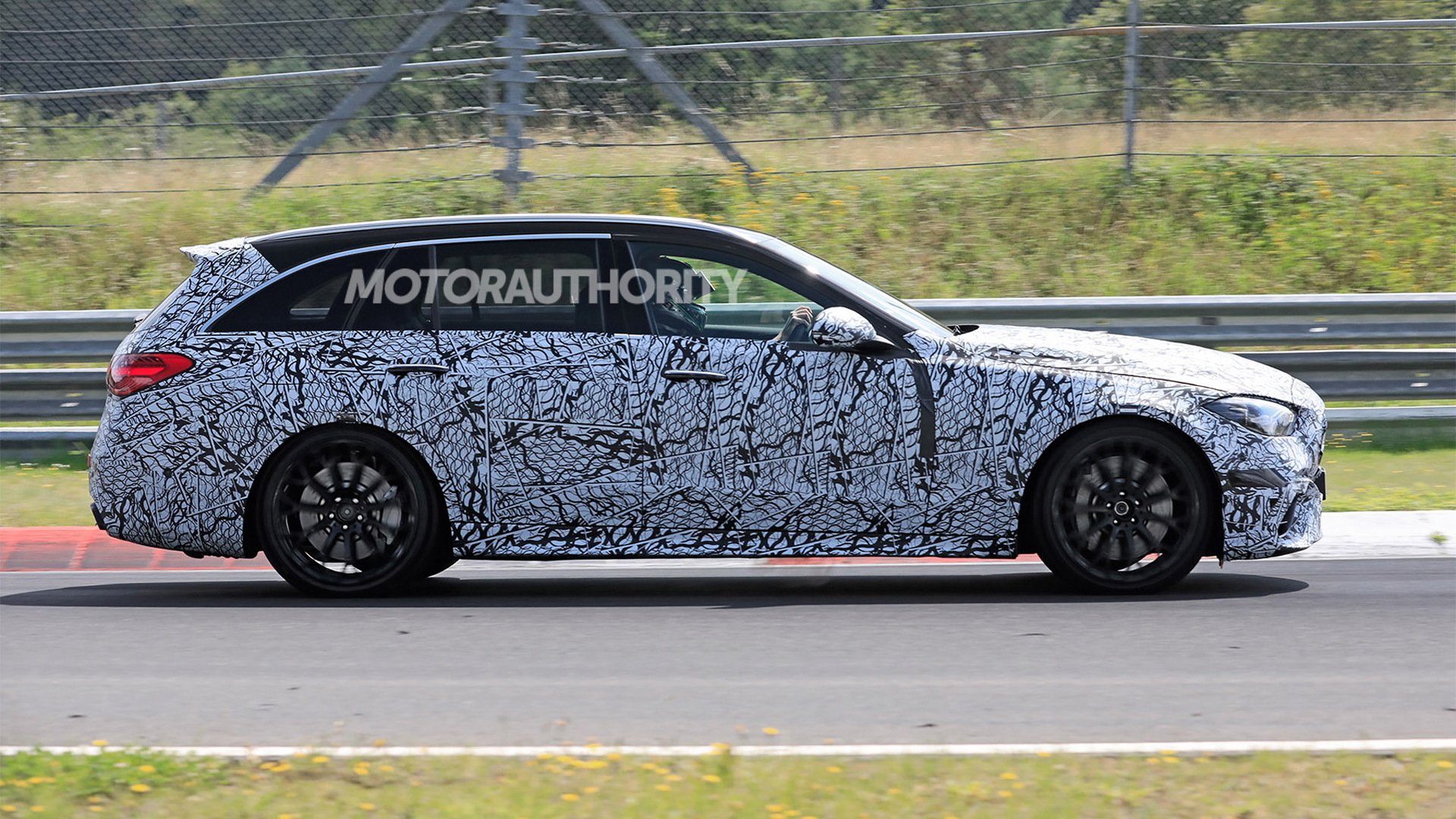 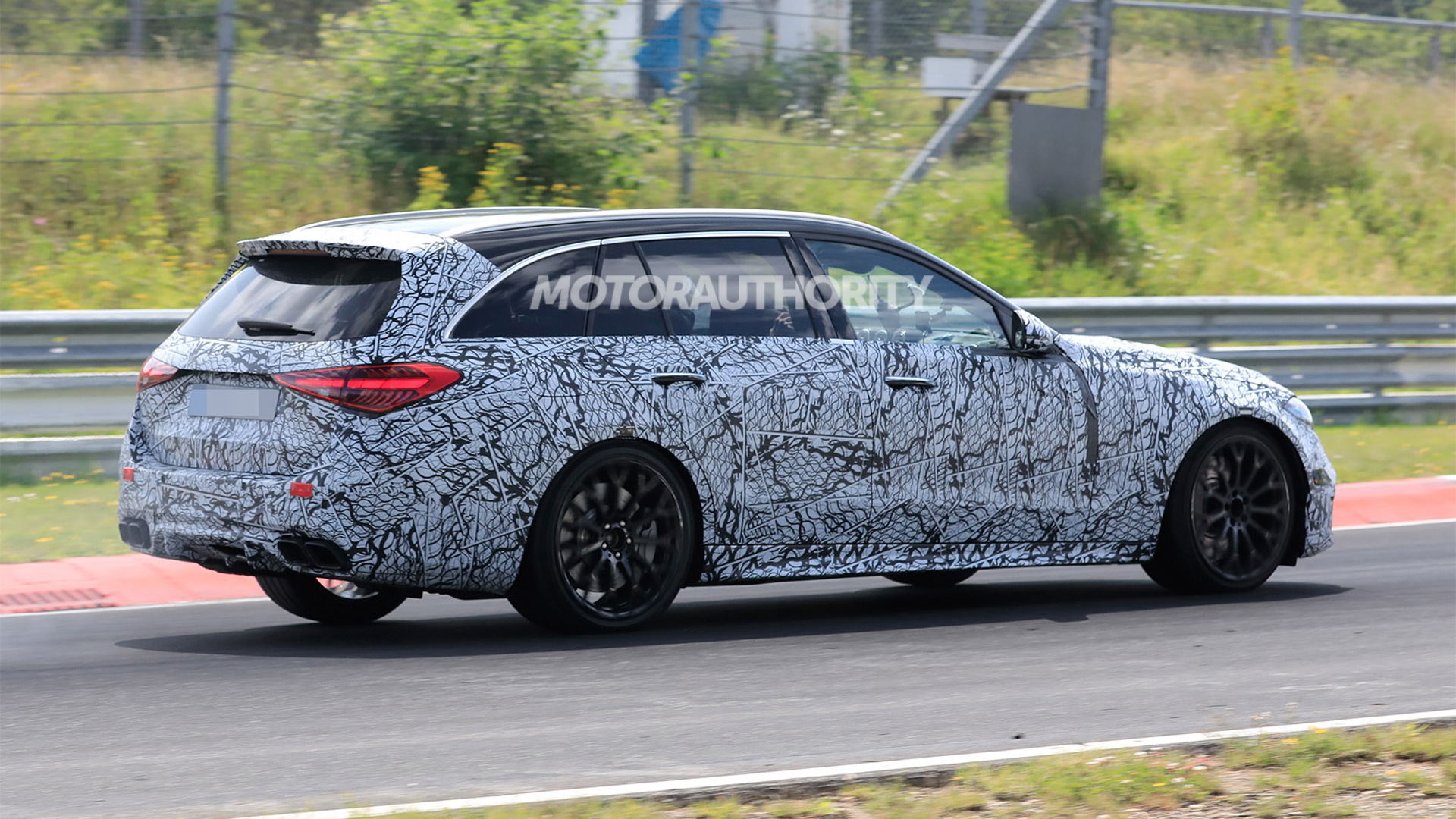 Mercedes-Benz in February unveiled its redesigned 2022 C-Class and once again the nameplate will offer a high-performance C63 developed by the Mercedes-Benz AMG skunkworks.

We've already spotted prototypes for the C63 sedan, and now we have new spy shots and video of a prototype for the wagon, or Estate as Mercedes likes to call the body style. The regular C-Class wagon has already been shown, and no, it isn't coming to the U.S. With any luck, we could see the new C-Class All-Terrain soft-roader here, though.

The prototype is heavily camouflaged but from what we can see, there will be flared wheel arches, large intakes in the front fascia, a pronounced rear diffuser, and four square-shaped exhaust tips.

We can confirm that the current C63's 4.0-liter twin-turbocharged V-8 won't make into the new generation. Instead, the powertrain will consist of the 2.0-liter turbocharged inline-4 found in the latest generation of AMG's compact cars, but with even more power than those cars' maximum 416 hp, and it will also receive a boost from hybrid technology similar to what's used in Formula One, as well as the upcoming AMG One hypercar.

In the new C63, an electric-aided turbocharger will help boost output from the 2.0-liter engine to 442 hp. There will also be an electric motor integrated with the engine in mild-hybrid configuration to power ancillary features, as well as serve as a starter motor. On top of this, there will also be a much more powerful motor (up to 201 hp) at the rear axle to take combined output to a maximum 643 hp. This rear motor will be mated to its own 2-speed transmission. The 643-hp figure will likely be reserved for a C63 S. Expect the regular C63 to have around 550 hp, which is still up significantly on the 503 hp of the outgoing C63 S.

There will be a weight penalty due to the complex powertrain. Expect the hybrid technology to add about 550 pounds to the car and bring its curb weight to almost 4,410 pounds. Part of the hefty load is due to a big battery that should provide a decent electric range. One weight-related benefit of the system will be an ideal 50:50 weight distribution thanks to less weight over the front axle compared to the outgoing C63, due to the smaller engine.

Look for the new C63 to debut late this year or early next. A new C43, which may end up being badged a C53, is also coming. Stay tuned.