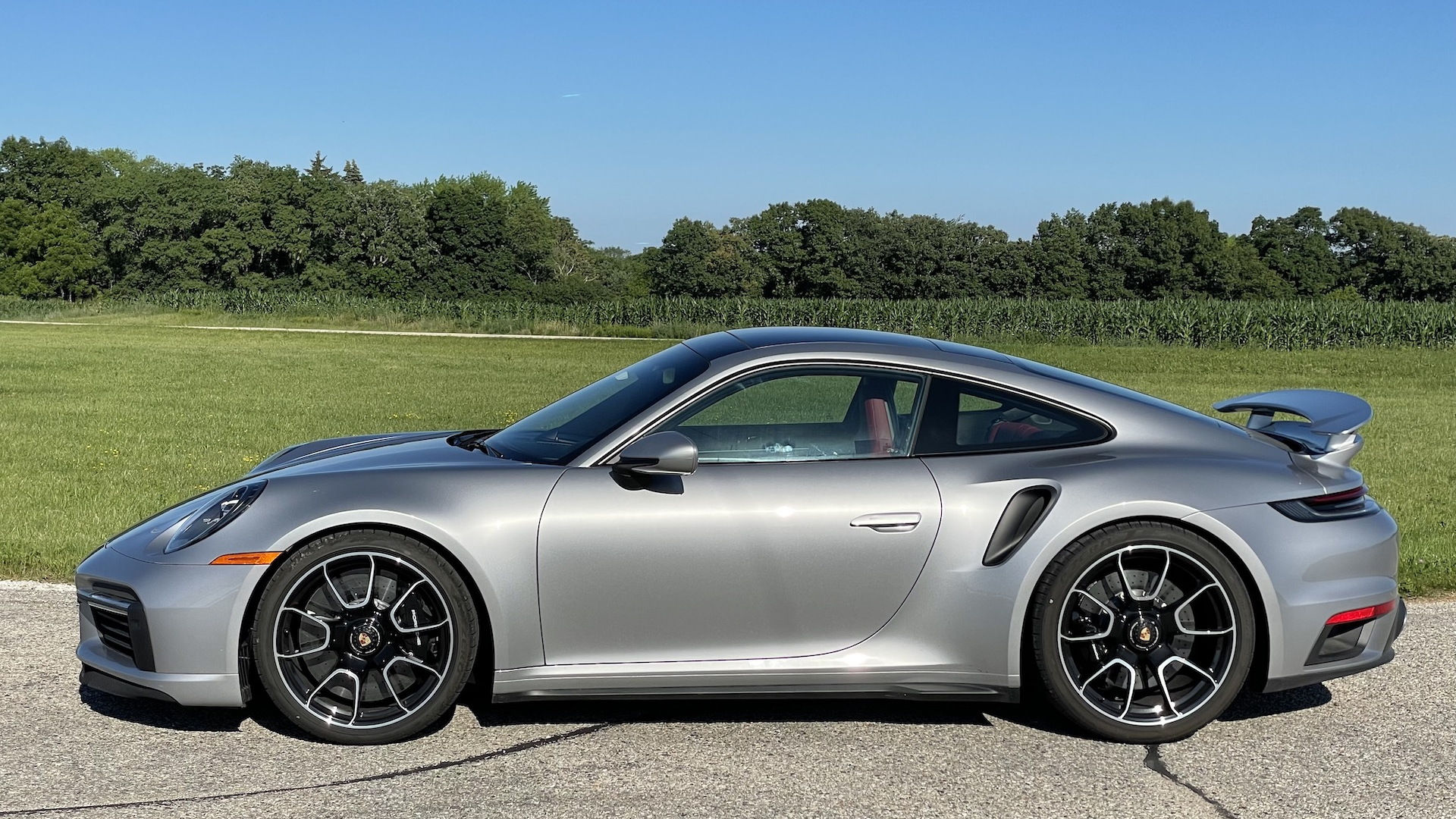 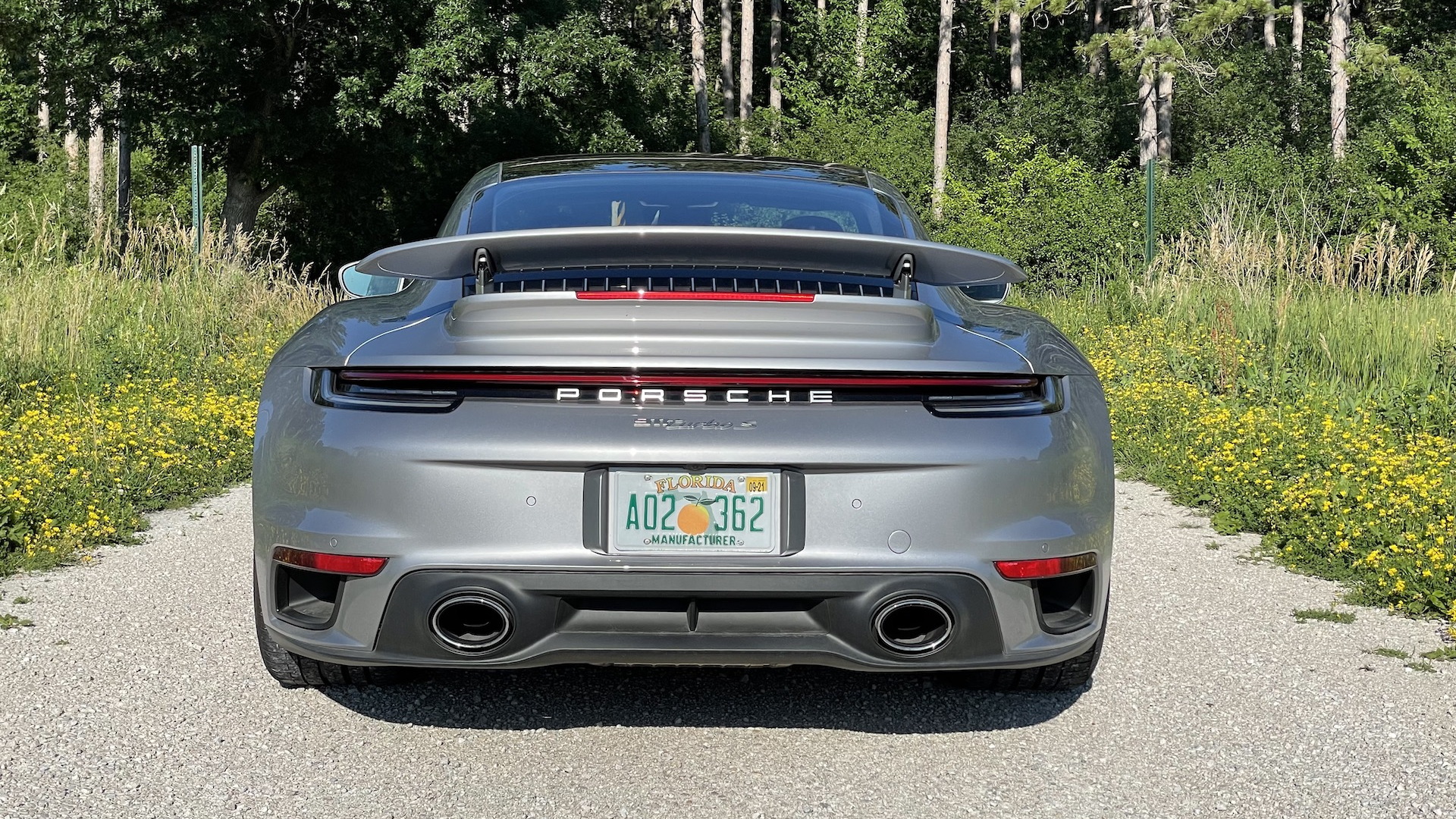 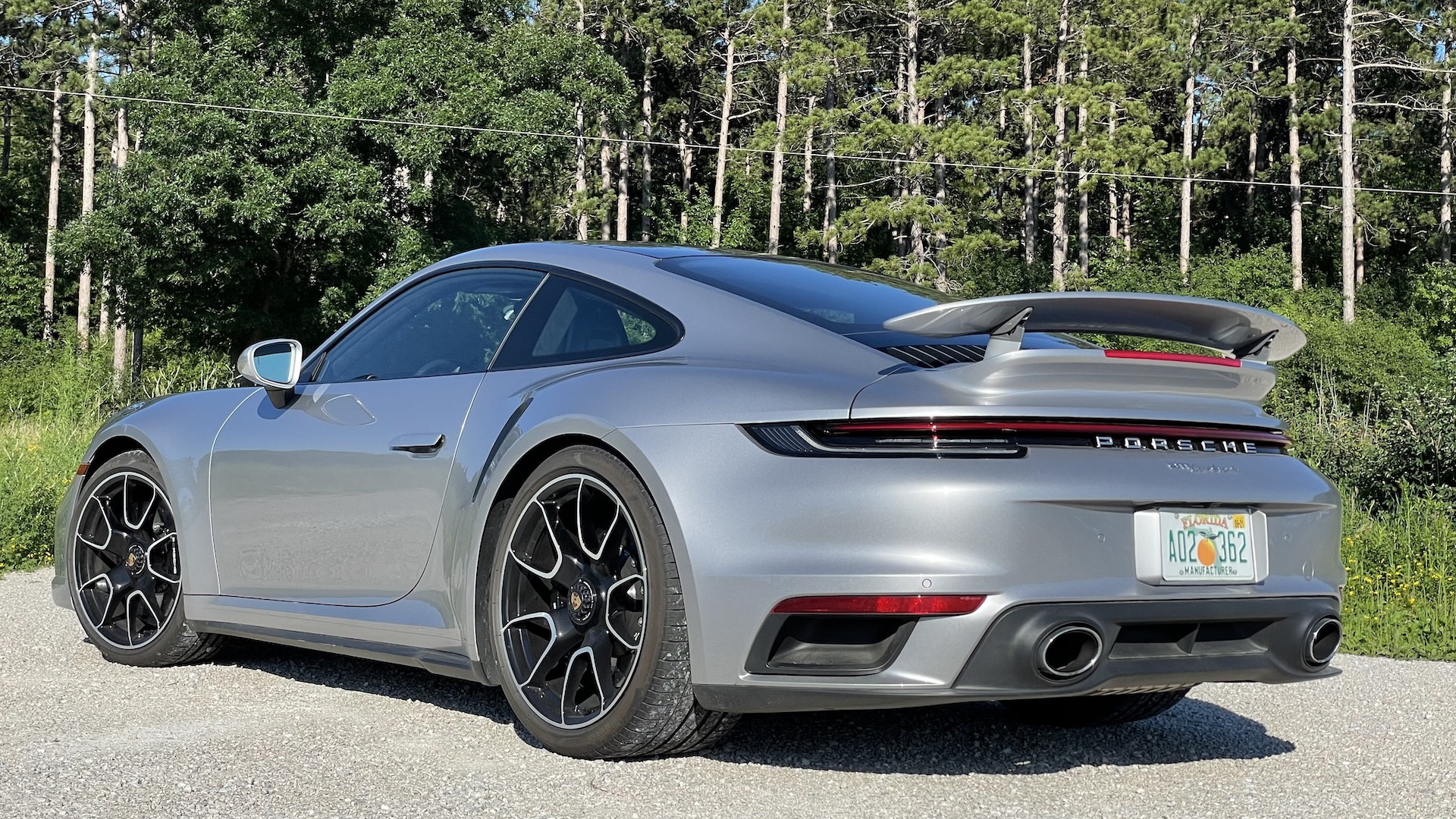 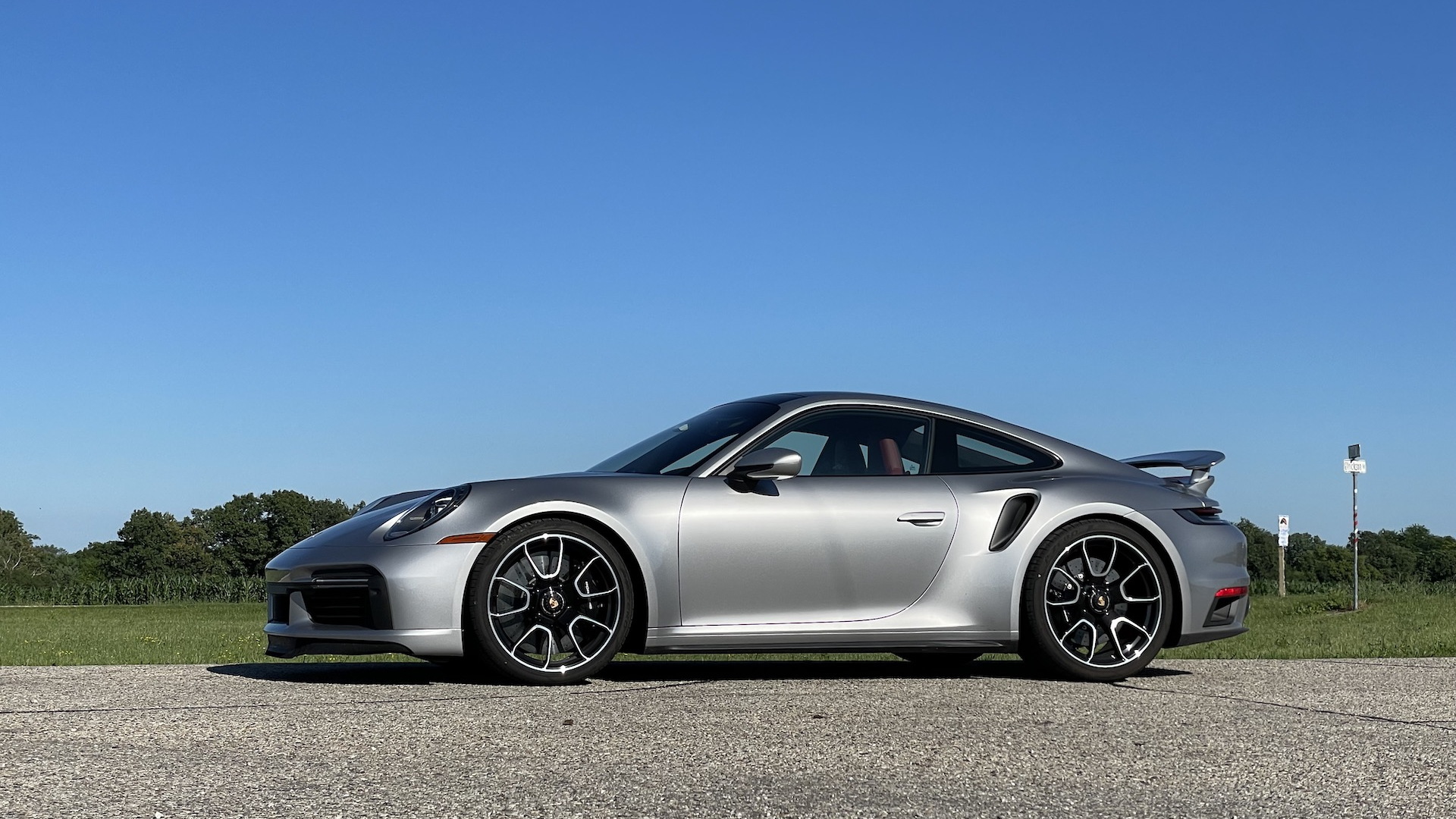 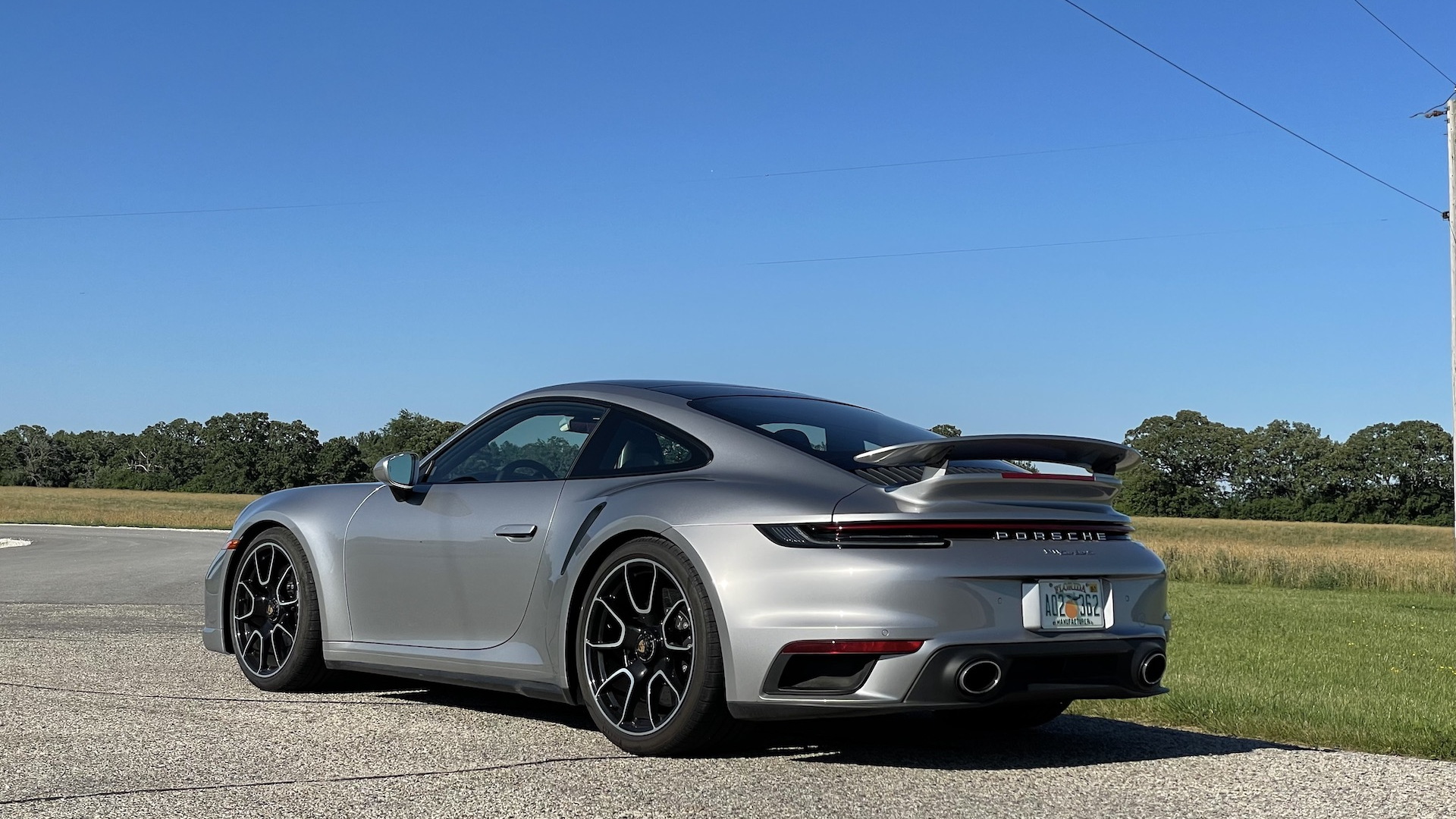 A week off, a rustic road, and a sports car are a formula for happiness. It gets even better when the sports car is a 2021 Porsche 911 Turbo S.

I spent a week in the 911 Turbo S hunting for the best roads in Southeastern Wisconsin, with nothing to do but enjoy the summer weather and take in the abilities of what is surely more of a supercar than a mere sports car. Along the way, I learned the myriad ways the Turbo S hits and the few ways it misses. Here’s what I found.

Everything is bigger in the 911 Turbo S: the brakes, the engine, the power, the performance. It all starts with the twin-turbocharged 3.8-liter flat-6 slotted behind the rear axle. With 640 hp (60 more than the last 911 Turbo S) and 590 lb-ft of torque, it makes near Hellcat power from an engine 60% the size. The performance figures push into supercar territory: 0-60 mph in 2.6 seconds, the quarter mile in 10.5 seconds, and a top speed of 205 mph.

The 911 Turbo S intoxicates with its power delivery. With all-wheel drive, beefy 315s in the back, and the weight over the rear axle, the power pounds the pavement with violent efficiency. The Turbo S doesn’t waste energy spinning its tires and making a fuss—credit where credit is due, in part, to sharply honed traction and stability systems. It just sends a shock through your body as the spinning mass of the flat-6 translates into forward momentum. And it’s easy to repeatedly achieve sub 3.0-second runs. Just put the steering wheel-mounted drive mode controller into Sport+ mode, mash the brake and gas, warn any occupants to rest their heads against the headrests for fear of whiplash, then let go of the brake. The 3.8 purrs at idle then sounds the signature Porsche “whoom” as it launches.

The 8-speed automatic transmission holds onto gears as long as possible in Sport+, grabs the next gear quickly, and downshifts to provide all the power you need and more for the next run.

The 911 Carrera, Carrera S, and Targa 4 all offer amazing performance with a ride comfortable enough to make them daily drivers. The 911 Turbo’s stiffer ride and wealth of additional performance equipment make it feel like a race car for the street.  The suspension has new dampers that can be adjusted several hundred times per second. The car I drove had the optional sport suspension that lowers the car 0.4 inch on shorter springs. It’s all tuned to be considerably stiffer than the suspension in the mere mortal 911s, and that gives the Turbo S more road feel. The ride borders on being too firm, but it doesn’t get appreciably worse when the road gets bumpy. In a spirited run on one rustic road, the ride became busy, but not overly jarring, even in Sport+ mode. The suspension likely doesn’t create the hard hits of full compression due to how quickly the dampers can adjust and the additional helper springs that Porsche adds to the rear axle.

In addition to the updated suspension, the 2021 911 Turbo S has wider 255/35 front and 315/30 rear tires mounted on center-lock 20- and 21-inch wheels. The wider tires and staggered wheel sizes give the car more tire contact patch and, according to Porsche, better temperature stability and load capacity.

The car also has a new active aerodynamics system with an adjustable front lip spoiler, adjustable front cooling flaps, and a variable rear wing. At a maximum of 375 pounds, the system creates 15% more downforce than the previous 911 Turbo S. Porsche also provides bigger, badder carbon-ceramic brakes that measure 16.5 inches up front with massive 10-piston calipers and 15.4 inches in the rear with 6-piston calipers.

We already know that the 911 Carrera S is an accomplished track car. While I wasn’t able to wring out the 911 Turbo S on a racetrack, I did hit some twisty roads, and it didn’t disappoint. It has the same sharp, stable moves, but with more grip from bigger tires, more downforce, and a stiffer suspension. As I approached twists and turns, the car followed a precise line, the Pirelli P Zeroes begging for me to press more traction into them. Wisconsin rural roads were a blast, but this car needs to show its true wares on a racetrack.

The Turbo bits make the 992-generation 911 look a little meaner. Most of it can be attributed to the aero parts. The active rear spoiler looks more like a wing and never tucks away nicely into the rear end like on other 911s. Instead it sits tall and proud to serve the purpose of helping the 911 Turbo S get around a track faster. The wider stance and massive rear tires also reveal the car’s performance intentions, especially when viewed from the rear. The wheels on my car, the $2490 Exclusive Design 911 Turbo S upgrade, also add to the design with their spidery split-five-spoke look.

Miss: It went away

I put about 290 miles on the 911 Turbo S during my week with it. I got only 16.6 mpg, according to the trip odometer, but the giggles the prodigious power inspired more than made up for a lack of efficiency. Now, my week off is over, and the 911 Turbo S is gone. It was good while it lasted.

The misses: Hard ride, supercar pricing, I can’t keep it