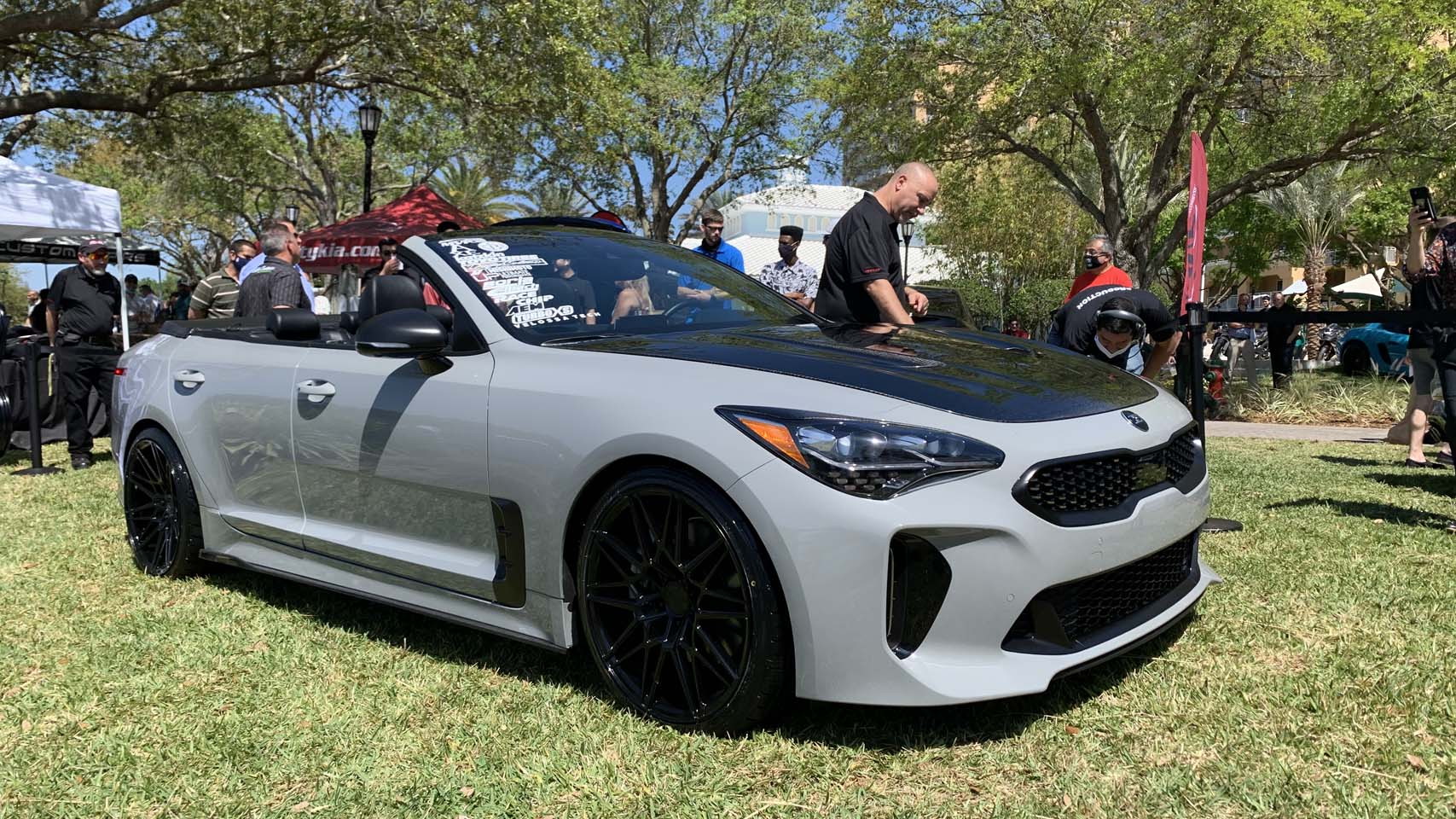 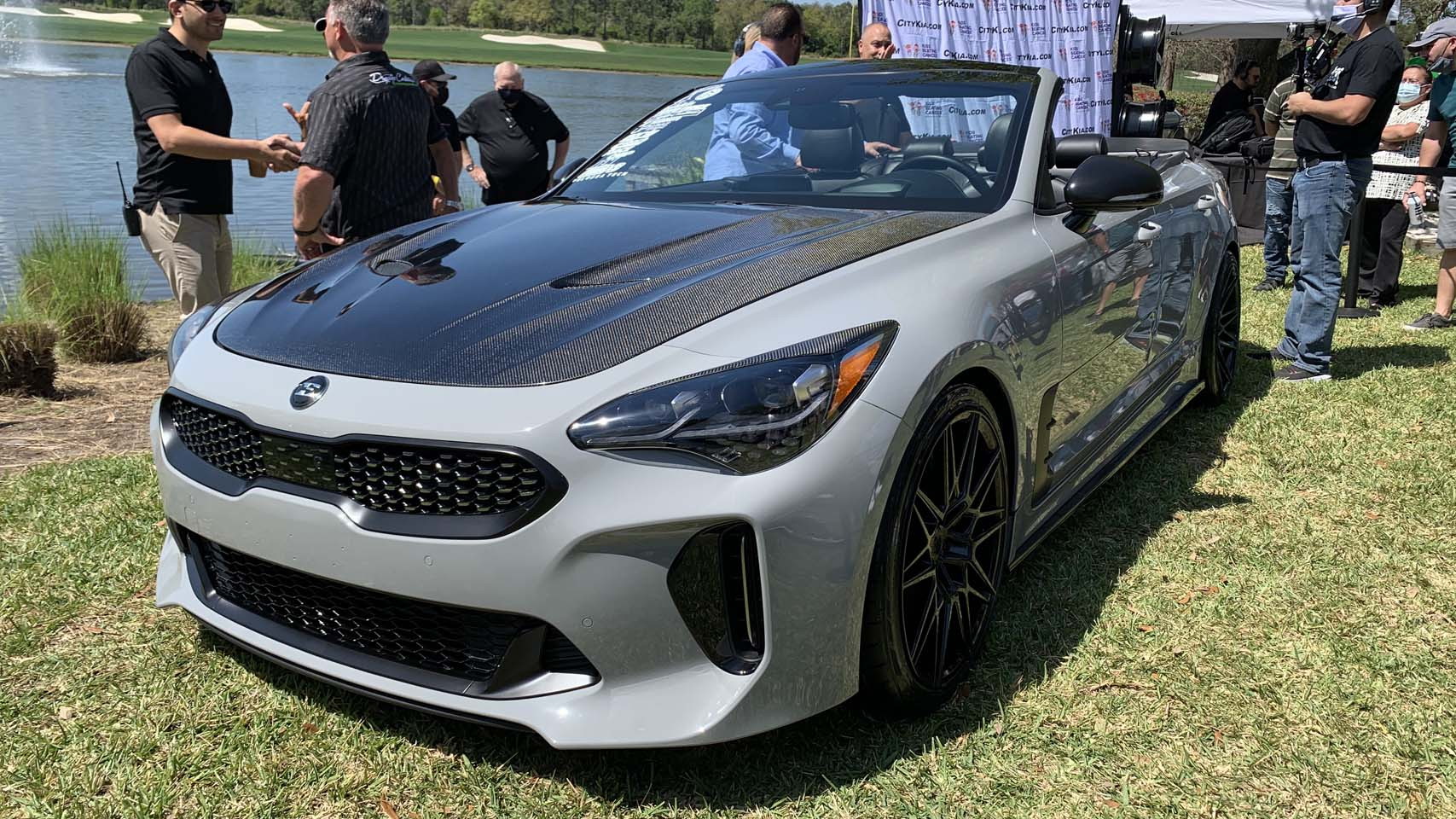 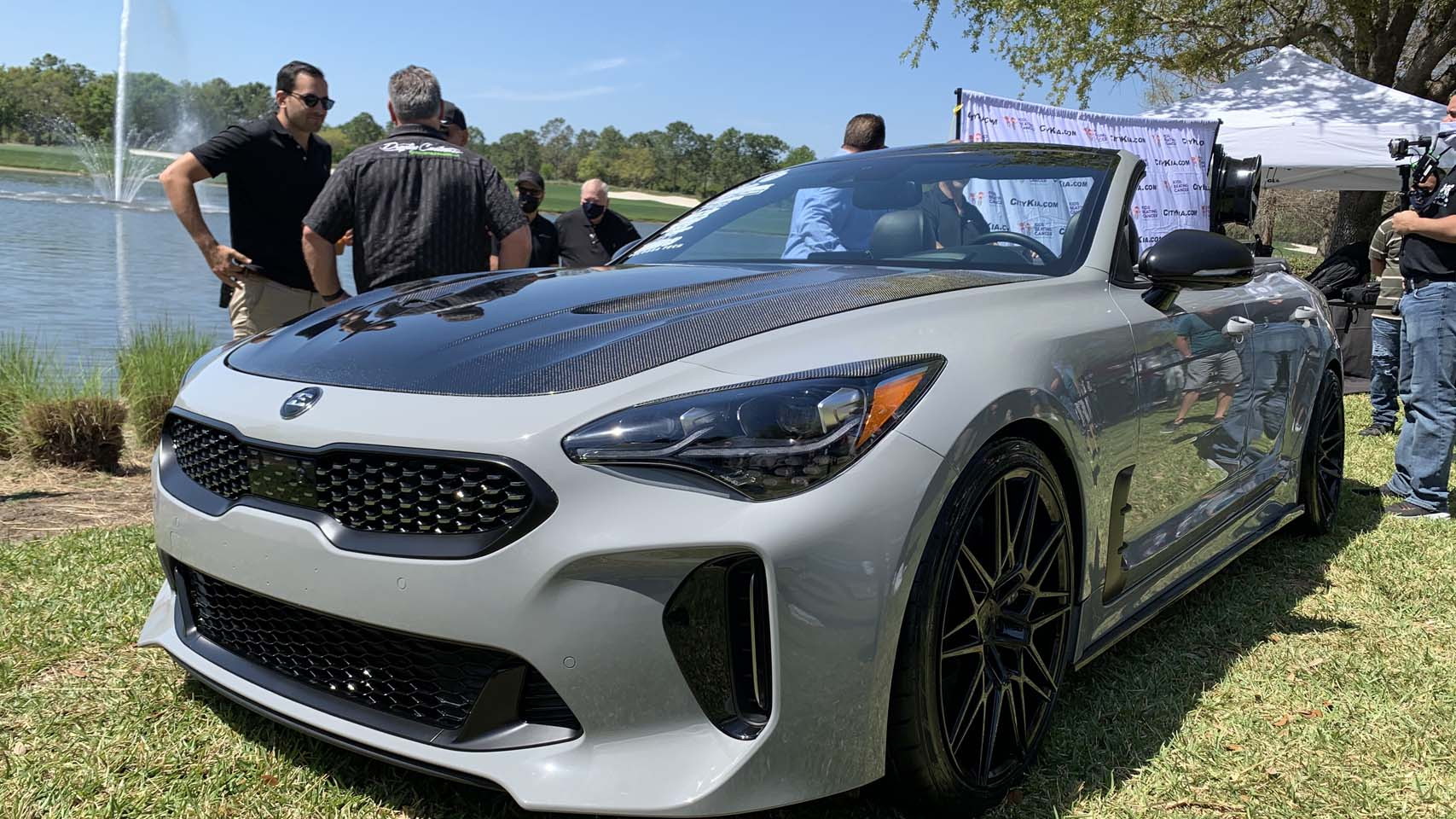 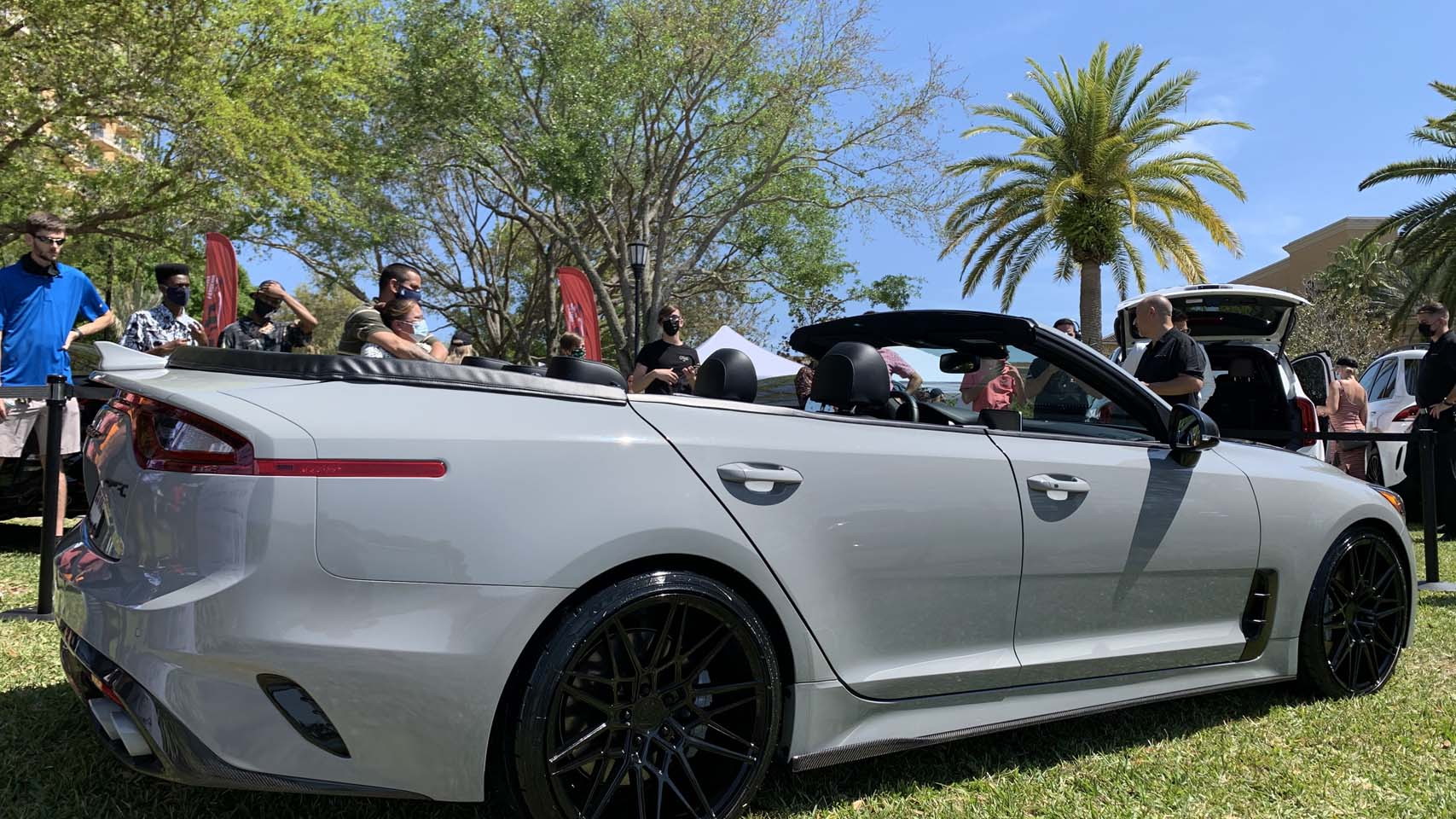 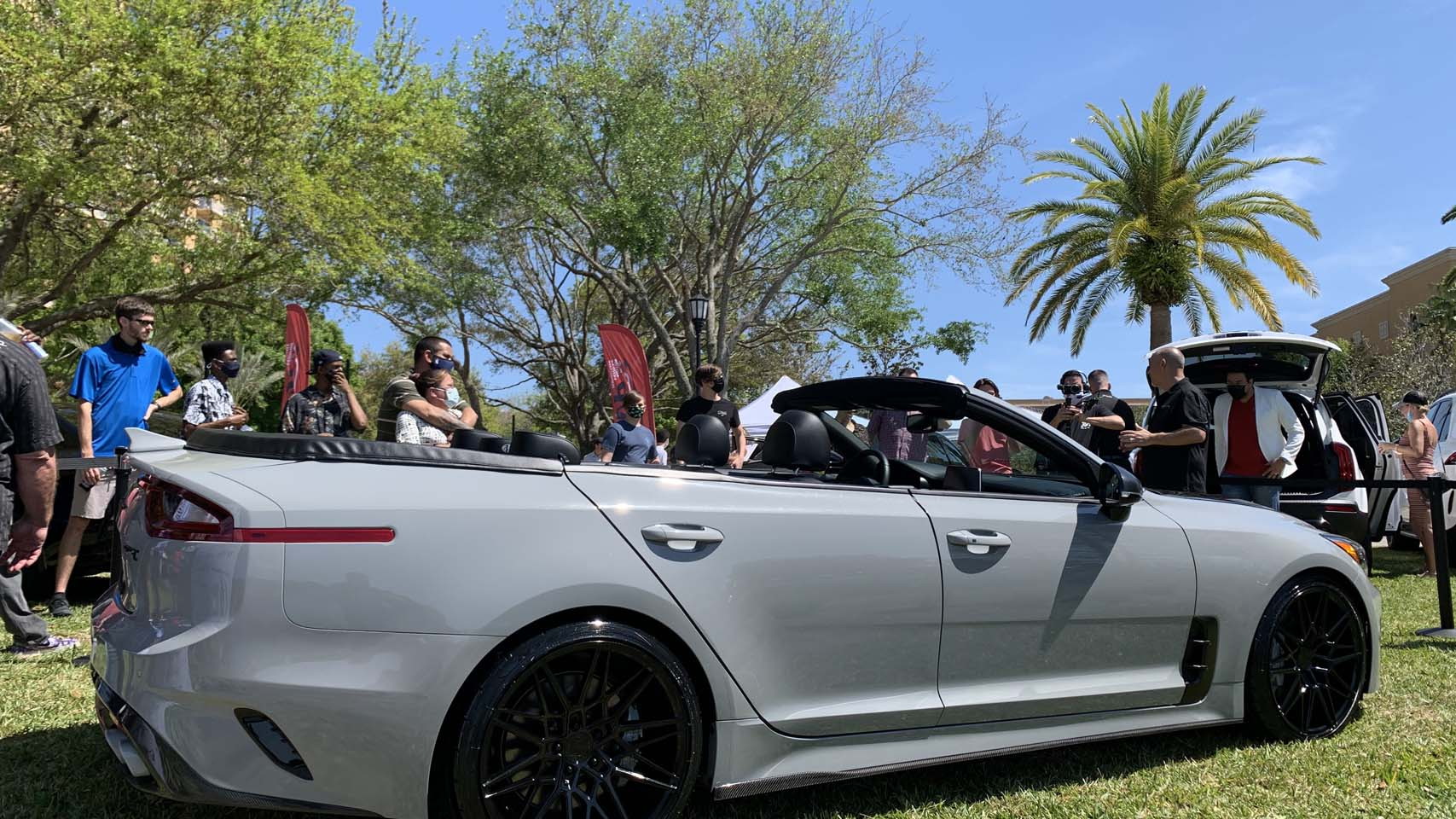 From start to finish the very modified Kia Stinger convertible seen here came to life in nine months. The vast majority of that time was dedicated to the convertible top conversion. The rest took less than three days.

City Kia of Orlando, Florida, is responsible for this creation, but it was vehicle development consultant Aaron Vaccar and City Kia's Motor Vehicle Performance department head Joe Manno who championed this creation to completion. The convertible Stinger build is known as the Stinger GT-C concept. A one-off build, the fully functioning car made its public debut on March 14 at the Festival of Speed at the Ritz-Carlton in Orlando.

City Kia may have conceived the idea, but the convertible conversion was done by Droptop Customs of High Springs, Florida. The shop has been chopping tops since 1976, built custom cars for basketball legend Shaquille O'Neal, and created a 2018 Dodge SRT Demon convertible.

The convertible conversion was about more than chopping the top off the Stinger. The body needed to be reinforced. Bracing was added to the side rails, under structure support plates are running side-to-side and diagonally underneath, and internal A- and B-pillar supports were added. A full-width rear brace and C-pillar was reconstructed from steel. This all ensured the structure of the Stinger would be sound despite retaining four functional doors.

For the three-layer soft top, a four-bow brace was mounted behind the rear seats to serve as the top's base. The power-operated top uses two hydraulic pumps. A custom rear decklid cover was created out of the hatchback panel to hide the top when stowed, and it can be raised while moving at up to 5 mph after manually releasing two latches.

While all the bracing and extra supports were created from steel, they are currently being reproduced in aluminum to help keep the weight in check.

Notably, the power soft-top has the same roofline, when raised, as the stock Stinger. Droptop Customs estimates the convertible conversion will add about 70 lbs to the Stinger after the parts are recast in aluminum.

Manno's team at City Kia's Motor Vehicle Performance department worked with various suppliers to add a host of go-fast bits and other aftermarket parts to showcase what the team can do for customers. The car was originally supposed to appear at the 2020 SEMA show, but that was derailed by COVID-19.

The interior isn’t yet complete, but it will receive a customized Katzin leather kit in a lighter sport gray color to better match the car's current look.

Vaccar and Manno wouldn't disclose how much money has been sunk into creating the Stinger GT-C concept. "You need to understand that when you do a one-off, you can't put a price on it. Every nut and bolt and angle is made from scratch," Vaccar said. The concept started life as a $52,304 Stinger GT2.

The car was commissioned and is owned by the owner of City Kia. The Stinger GT-C will make appearances at events in the Orlando area for awhile to showcase what City Kia's team has done, but afterward it could disappear into a garage forever.