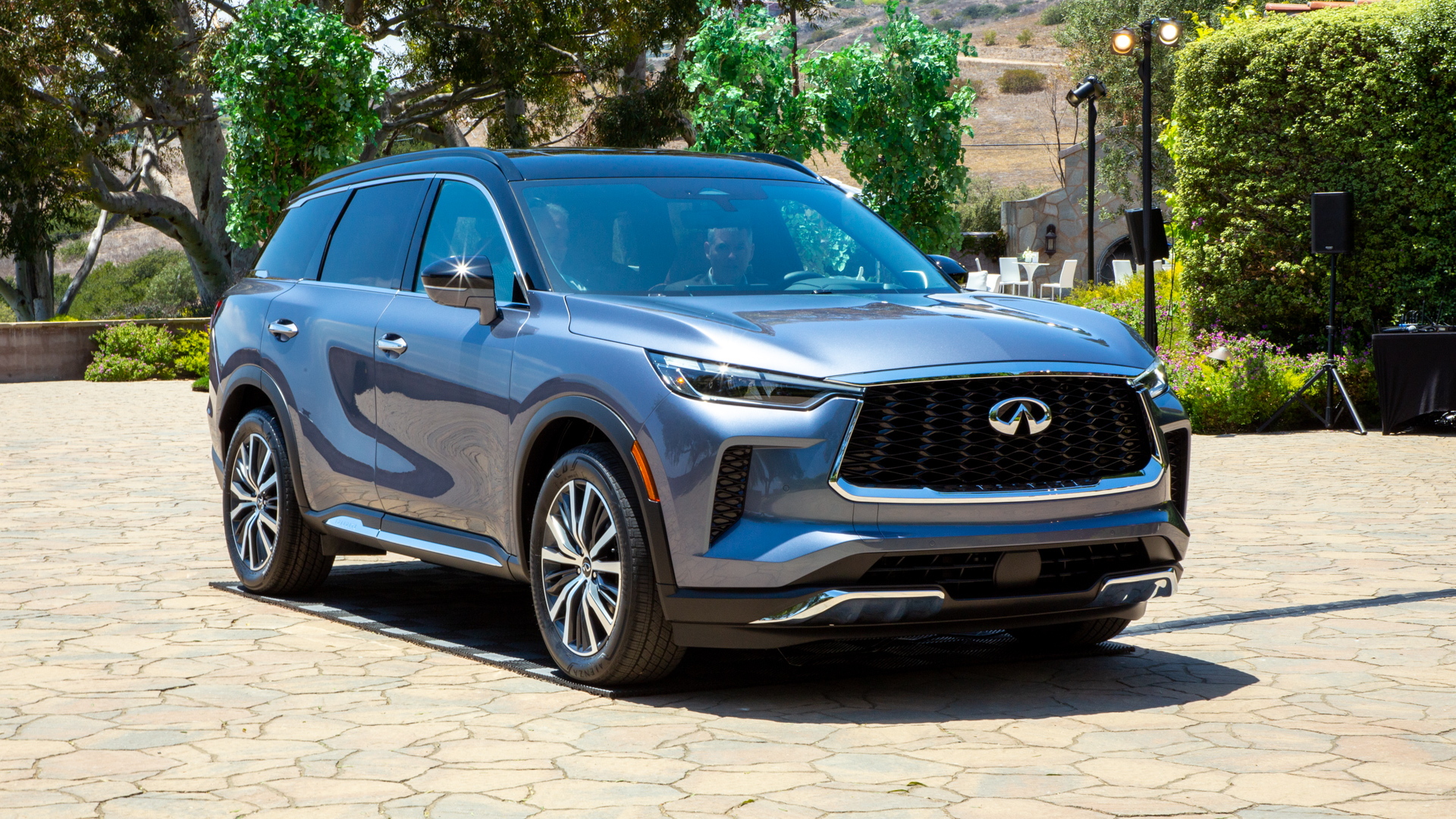 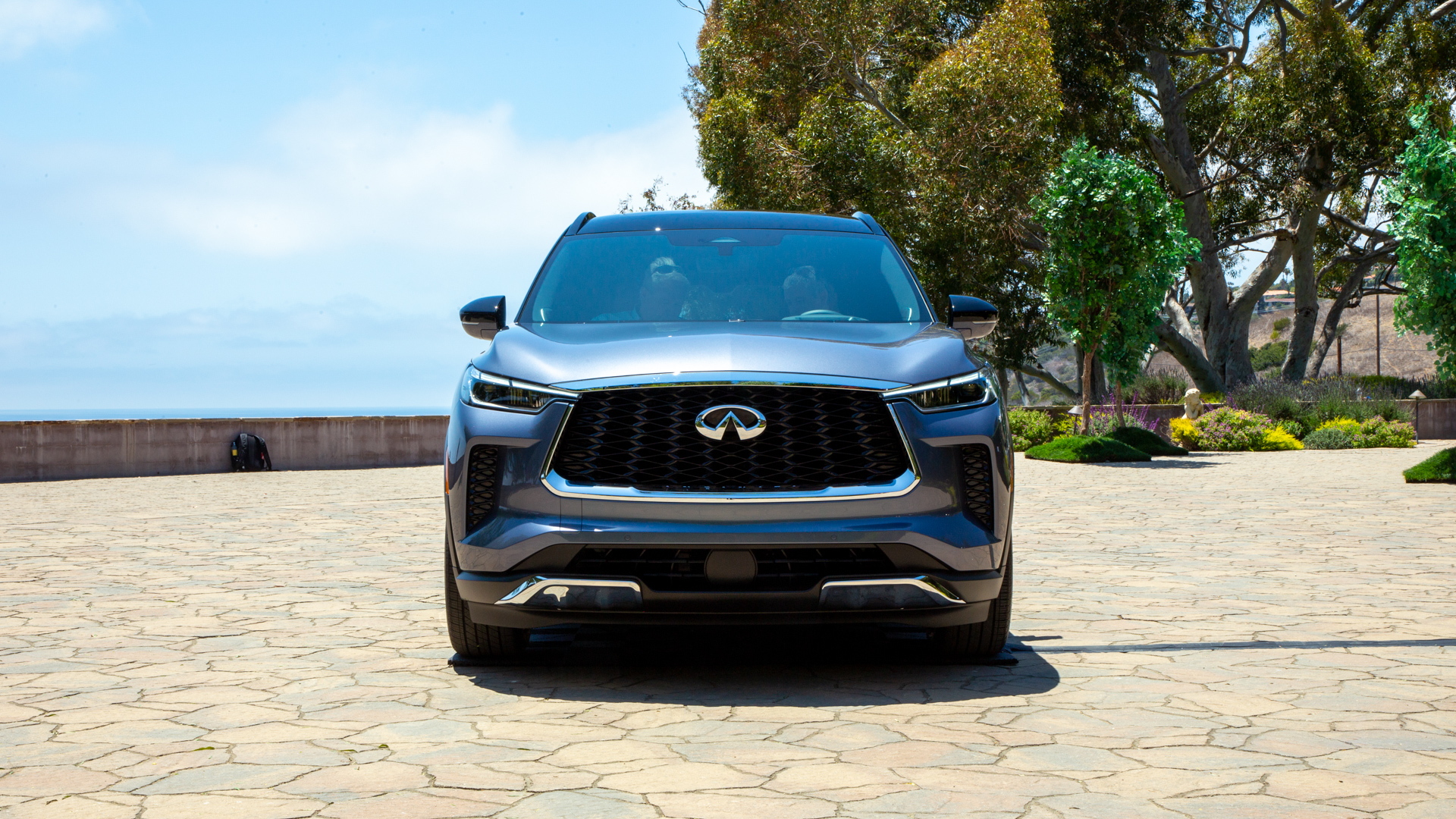 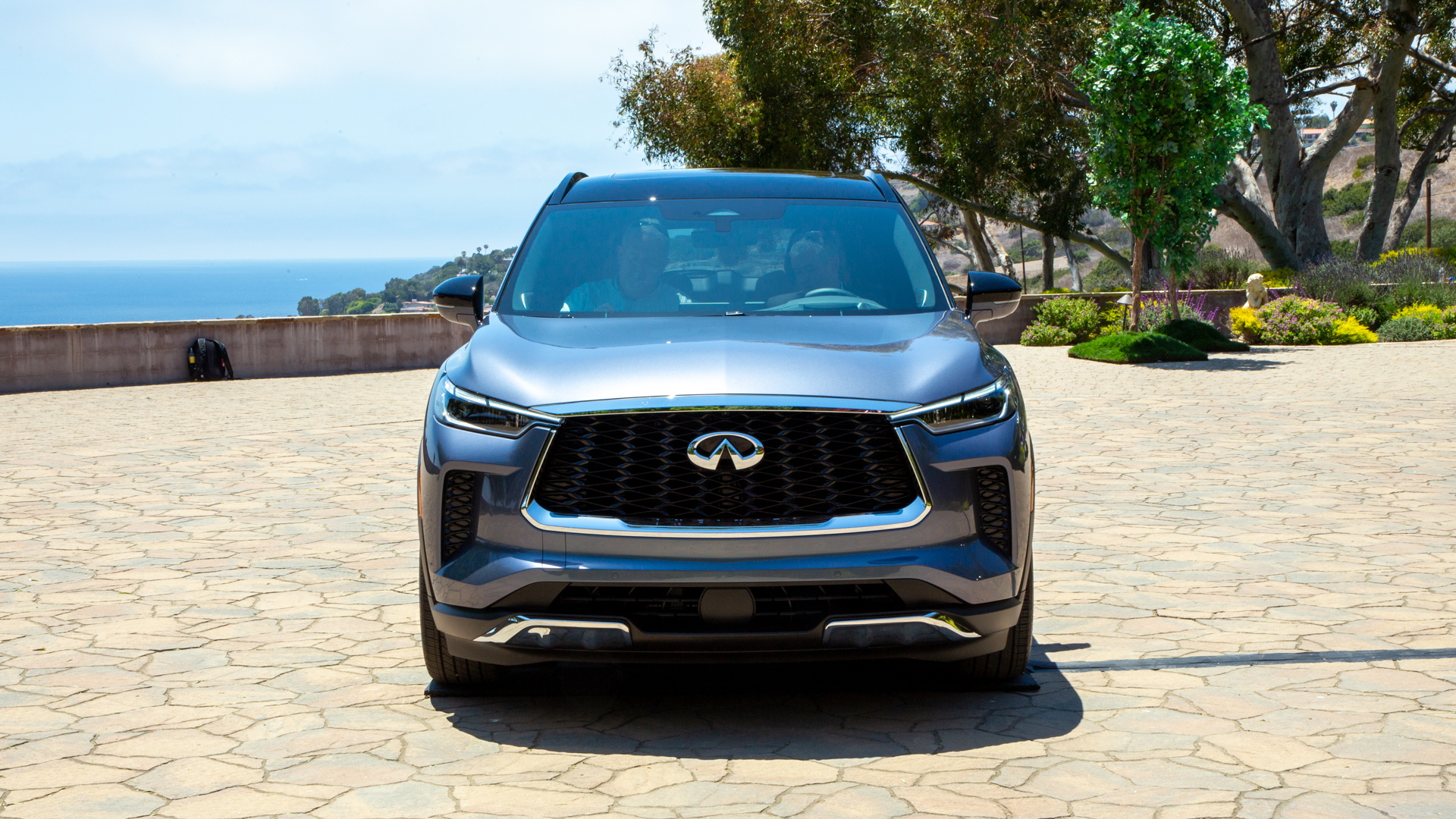 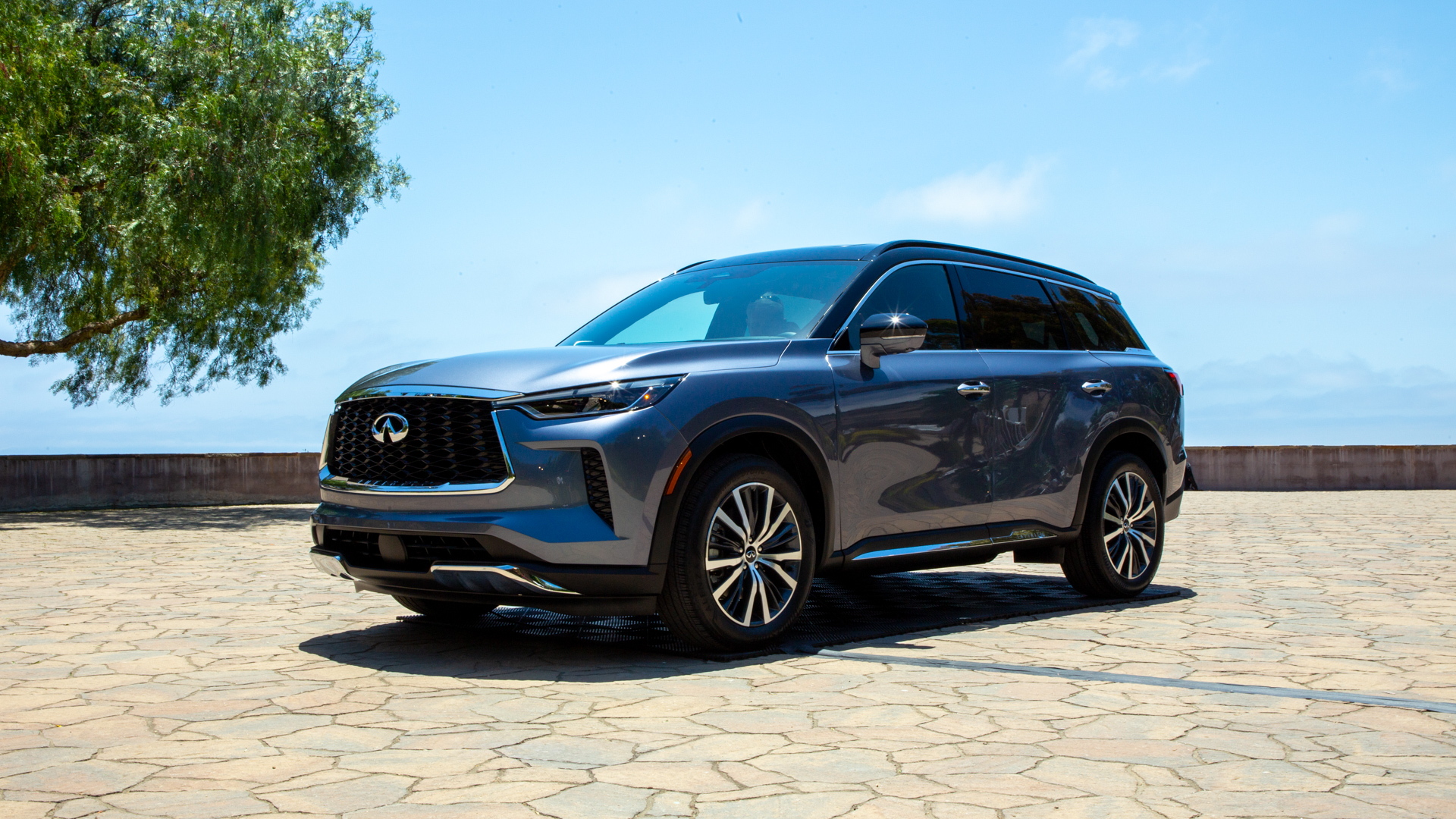 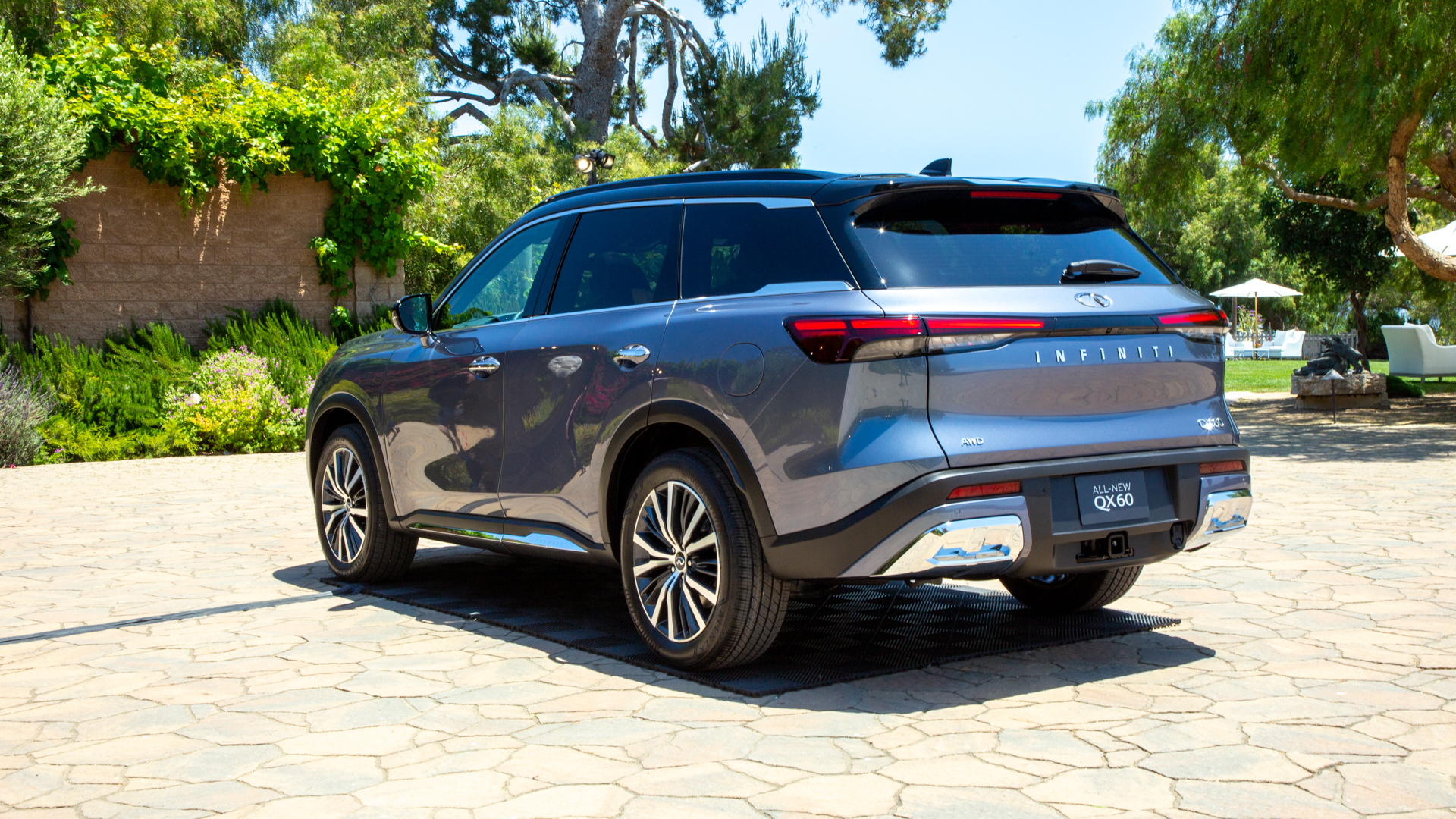 A redesigned Infiniti QX60 will arrive in late 2021 and after seeing it in person, we can say it offers plenty of style and a luxurious interior that the previous model lacked.

The new QX60 has been developed alongside the redesigned 2022 Nissan Pathfinder that debuted in early February, and is also coming as a 2022 model after both models took a break for 2021.

So what can buyers expect? Infiniti hinted at the design with its QX60 Monograph concept unveiled last fall, and the production version does indeed look very similar. The wheels have been toned down and the chrome roof rails are now black to match the roof, but otherwise it’s pretty spot on. That’s good because the new QX60 is pretty damn good looking, with a commanding presence in person even though it’s not that tall.

The 2022 QX60 will come in four trim levels. Pure and Luxe return as the two base trims, but the Signature Edition is no more. It is replaced by the Sensory trim level and there’s a new Autograph trim that is the most luxurious and will be easily picked out thanks to its black roof (the rest of the lineup will have monotone paint schemes).

Pricing has increased substantially, matched by a gain in standard equipment. The base Pure trim starts at $47,875 including a $1,025 destination charge, a $2,500 gain over the outgoing model. For that, there is a jump in equipment. A 12.3-inch touchscreen with wireless Apple CarPlay connectivity is standard (Android Auto still requires a cord), as is leather upholstery and a panoramic moonroof. All of those are big upgrades over the last base model.

The Luxe jumps up even more and starts at $53,925, a $4,750 increase that takes it above the highest MSRP for the 2020 QX60 and we haven’t even gotten to the top two trims yet. Infiniti guess that the Luxe will be the best selling model, closely followed by Sensory models which begin at $57,375. The luxurious Autograph that we saw stretches beyond that to $61,375.

The QX60 and Pathfinder use the same powertrain, a 3.5-liter V-6 mated to a 9-speed automatic from ZF. So long continuously variable transmission. We won’t miss you. Slightly up-tuned in the Infiniti, the engine makes 295 hp and 270 lb-ft of torque versus 284 hp and 259 lb-ft in the Pathfinder. But the two transmissions have the exact same gearing and final drive ratios. Front-wheel drive will be standard and an updated all-wheel-drive system with a direct coupling that is meant to prevent wheel slip is optional. Though it's yet to be confirmed, the return of a hybrid option at some point is likely.

Infiniti said the automatic is tuned to deliver good off-the-line acceleration coupled with smooth cruising performance, but we found that this setup had some issues executing passes and accelerating on the highway. We’ll have to drive the QX60 to see if those problems are found here as well.

Towing capacity increases. Some grades will be able to tow up to 6,000 lb, which is 20% more than the outgoing model, or enough to comfortably tow a 22-foot Airstream trailer. Making this towing rating possible is an uprated transmission oil cooler and trailer hitch included as part of a towing package ($900). These grades will also come with an integrated hitch receiver, trailer-tuned stability programming, and dedicated pre-wiring harnesses.

Infiniti engineers conducted extensive testing in the U.S. to ensure the vehicle suits our roads, and this included long stints in temperatures of 122 degrees and above in places like California's Death Valley, with heavy loads in tow.

While the QX60 does a good job differentiating itself from the Pathfinder on the outside, that won’t matter if the inside feels too much like a Nissan. The good news is that on the Autograph models, the materials and especially the first- and second-row seats definitely fit the bill. The technology, not quite as much.

The “zero gravity” front seats feel like enveloping thrones that swallowed me up in soft brown semi-aniline leather. Even though the seat bottom lacks an extension, the driver seat still has ample thigh support. The second-row captain’s chairs came close to replicating this experience, with enough bolstering to hold you in place but not so much that you feel stuck—like a gentle hug from an old friend (remember hugs?). Even the third row is comfortable by class standards; it thankfully offers a recline feature that provides a bit more headroom and a more comfortable seating angle. And the semi-aniline leather found in the Autograph is a real highlight, feeling like something out of a more expensive German luxury make.

There is one strange packaging quirk. Surprisingly, the only way to get the captain’s chairs is to opt for the Autograph edition. All of the other trim levels will come with a second-row bench that bumps seating capacity to seven. The captain’s chairs should be available in more trims and Infiniti hinted that this might be the case going forward after this first model year.

The QX60 also passed the “three Brians” test. I’m 5-foot-11 and I positioned the first and second rows for my comfort, then checked if there’s enough third-row leg room for me. About 2-3 inches were left between my knees and the second row, and the seat bottom cushion was high enough that my legs were comfortable back there as well, though it probably wasn’t high enough for long-trip comfort. Infiniti also did away with the old QX60’s rear window kink, which makes sight lines from the third row better as well.

Cargo room is measured at 14.5 cubic feet behind the third row, 41.6 cubic feet with it folded down, and 75.4 cubic feet with both the second and third rows dropped. Those numbers are comparable to the outgoing model, but the underfloor storage compartment is larger and can now swallow a small bag or backpack with ease.

I was less enthused with the technology offerings. The 12.3-inch multimedia touchscreen is larger than the 9.0-inch display offered in the Pathfinder, but the two systems look pretty much the same in terms of menu structure, the fonts they use, and the features offered. Wireless Apple CarPlay is standard (Android Auto still requires a cord), but I would like to see some styling differentiation here. The two vehicles share a 12.3-inch instrument panel display and a 10.8-inch head-up display. The instrument panel once again very closely resembles what you’ll find in the Pathfinder, just swapping out a QX60 in the graphics for the Nissan.

This still represents a big technology upgrade from the previous multimedia setup in the 2020 QX60, which looked to be about five years out of date. But if the QX60 has true ambitions to compete against the latest developments out of Lexus and German rivals, it needs a further technology infusion.

While the QX60 Autograph easily passes muster, it will be interesting to see how the lower trim levels stack up. Pricing, fuel economy, and trim information will be available closer to the QX60’s arrival at dealerships later this year.