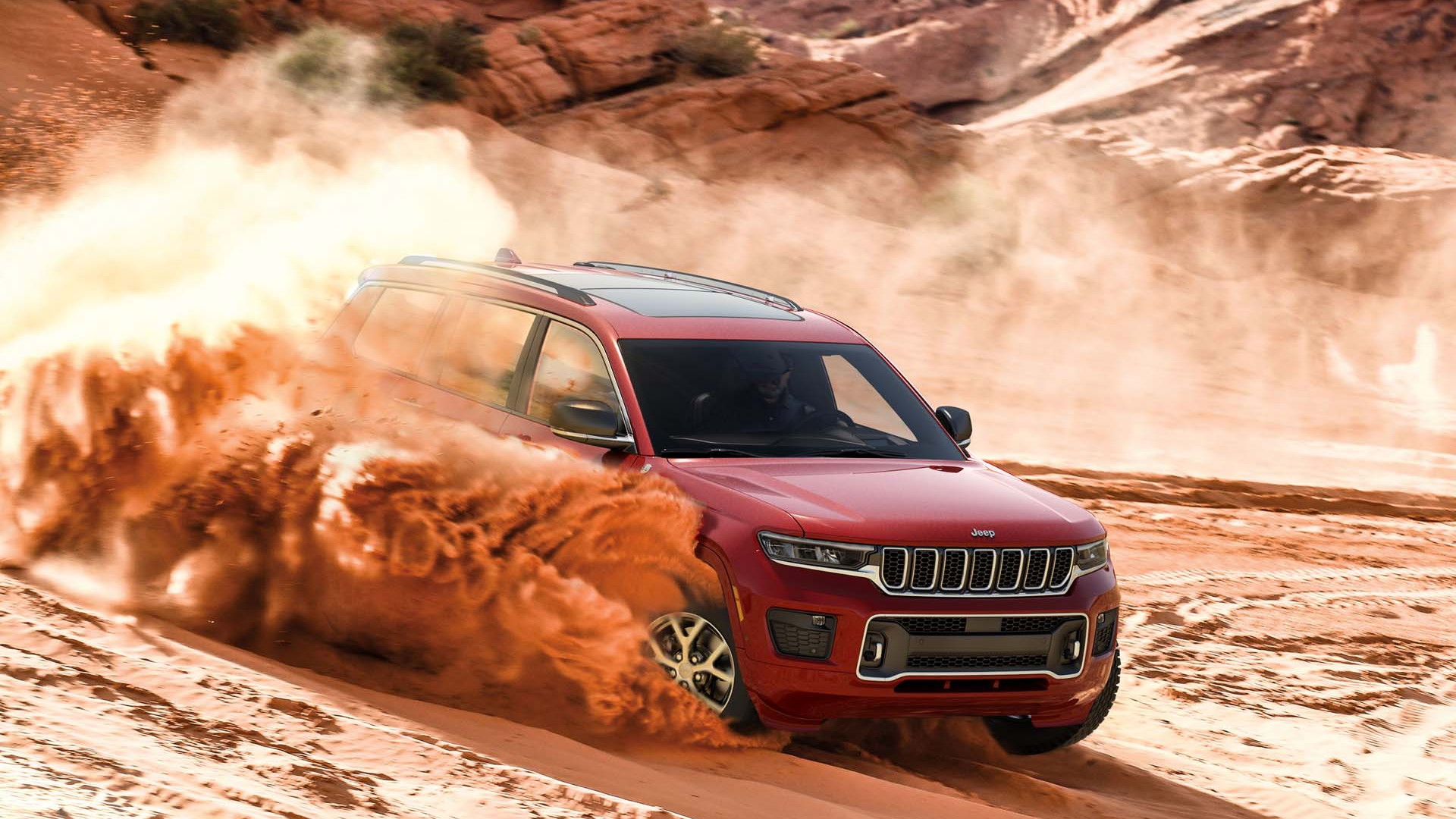 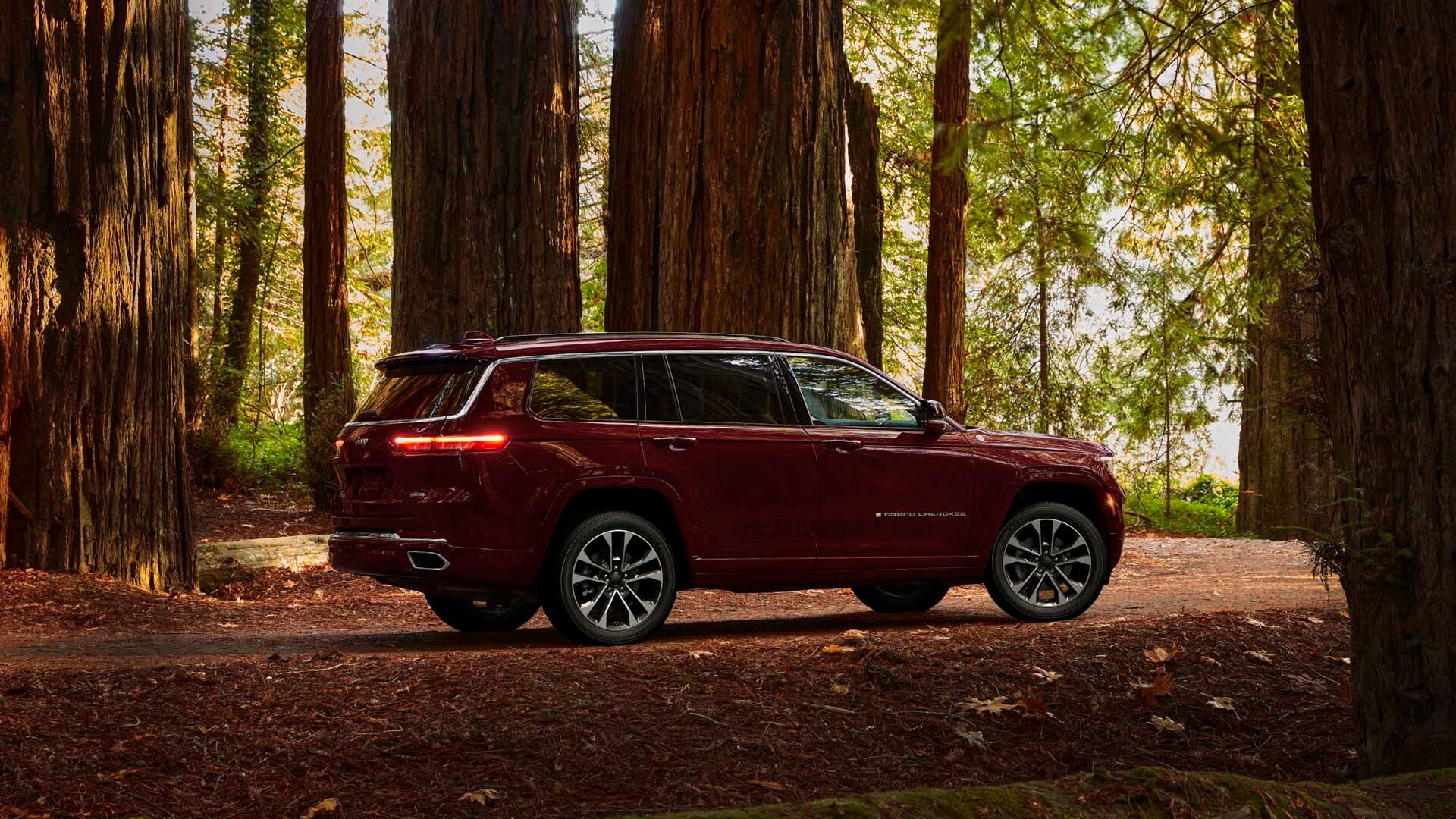 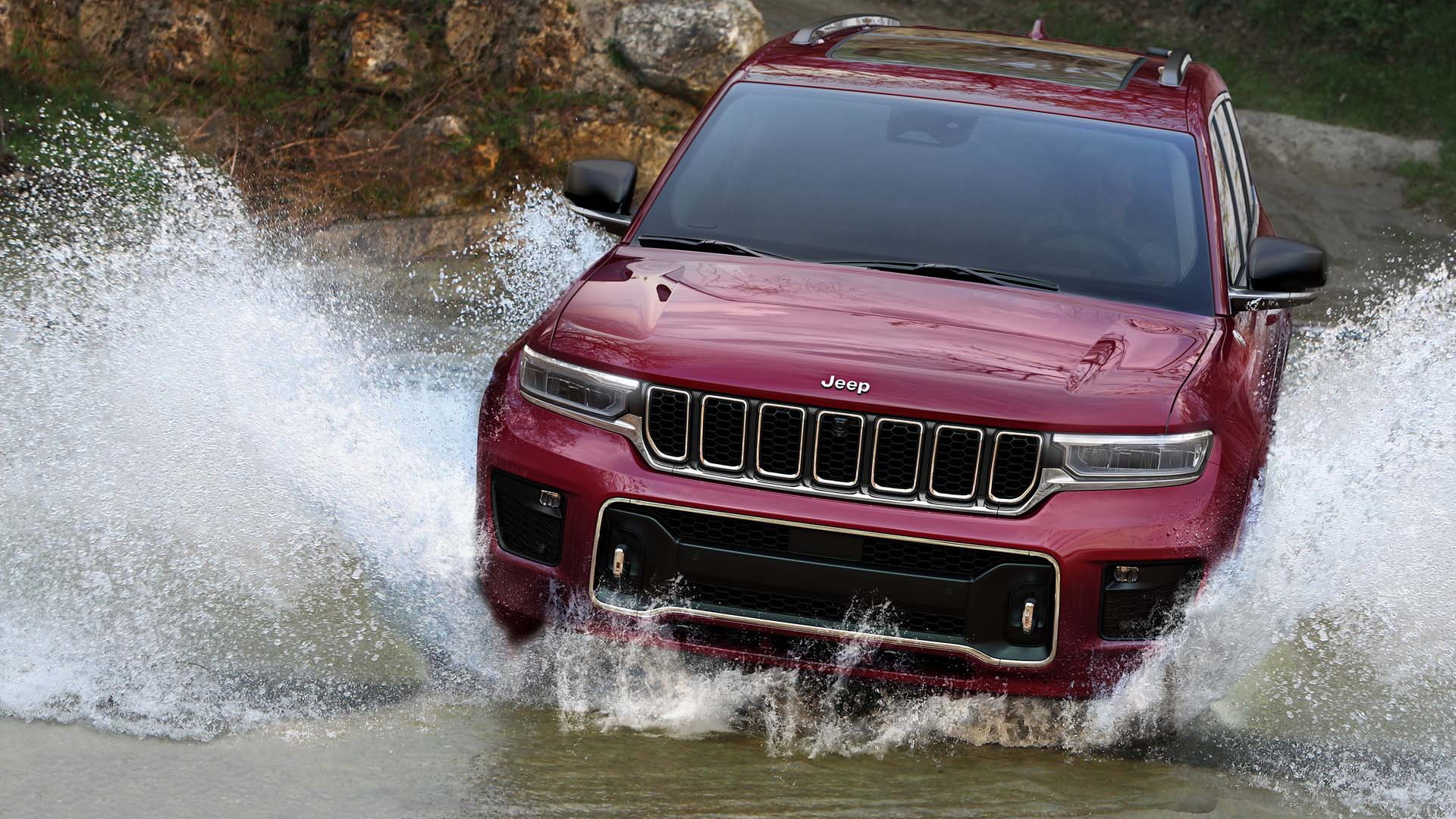 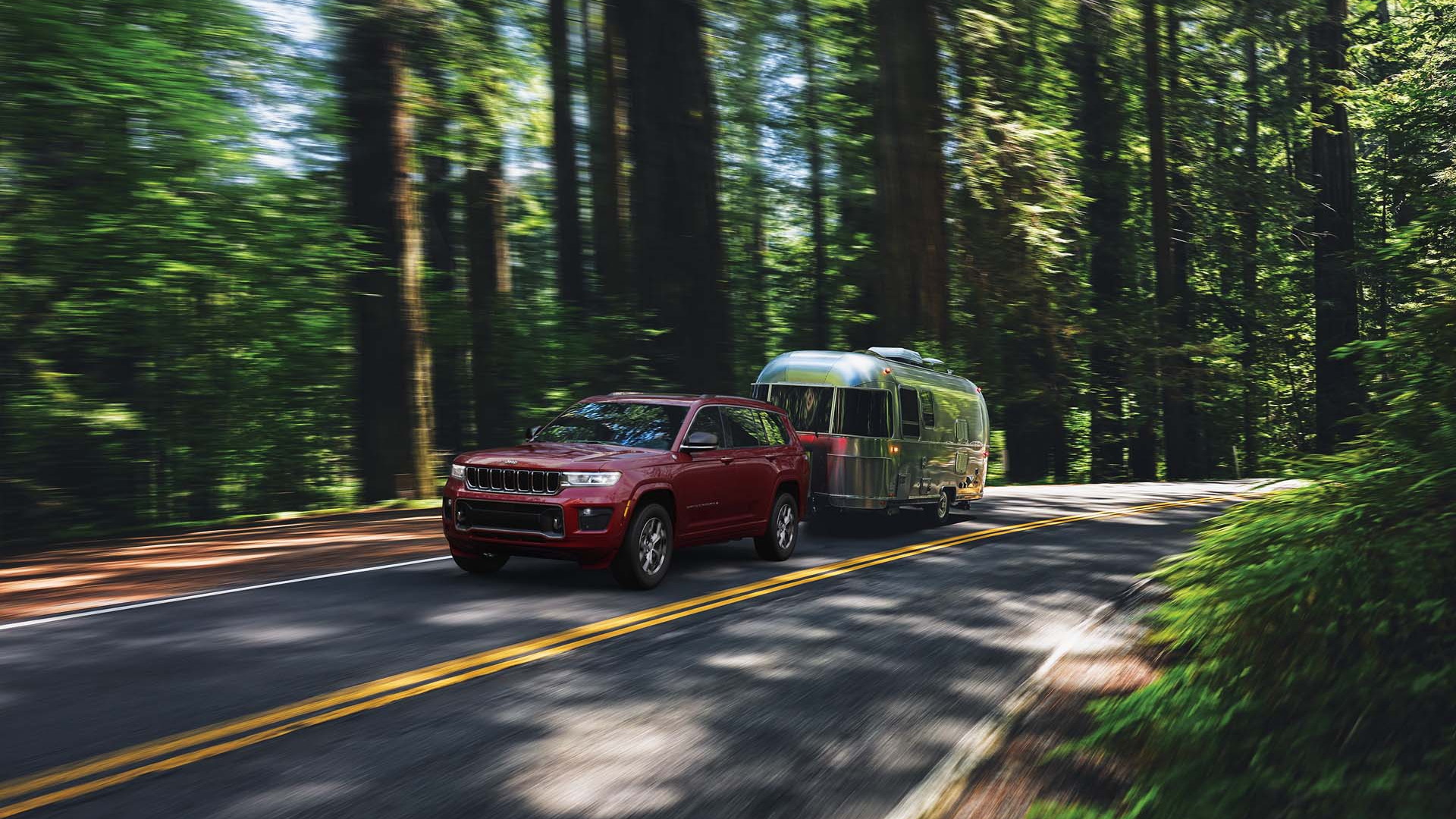 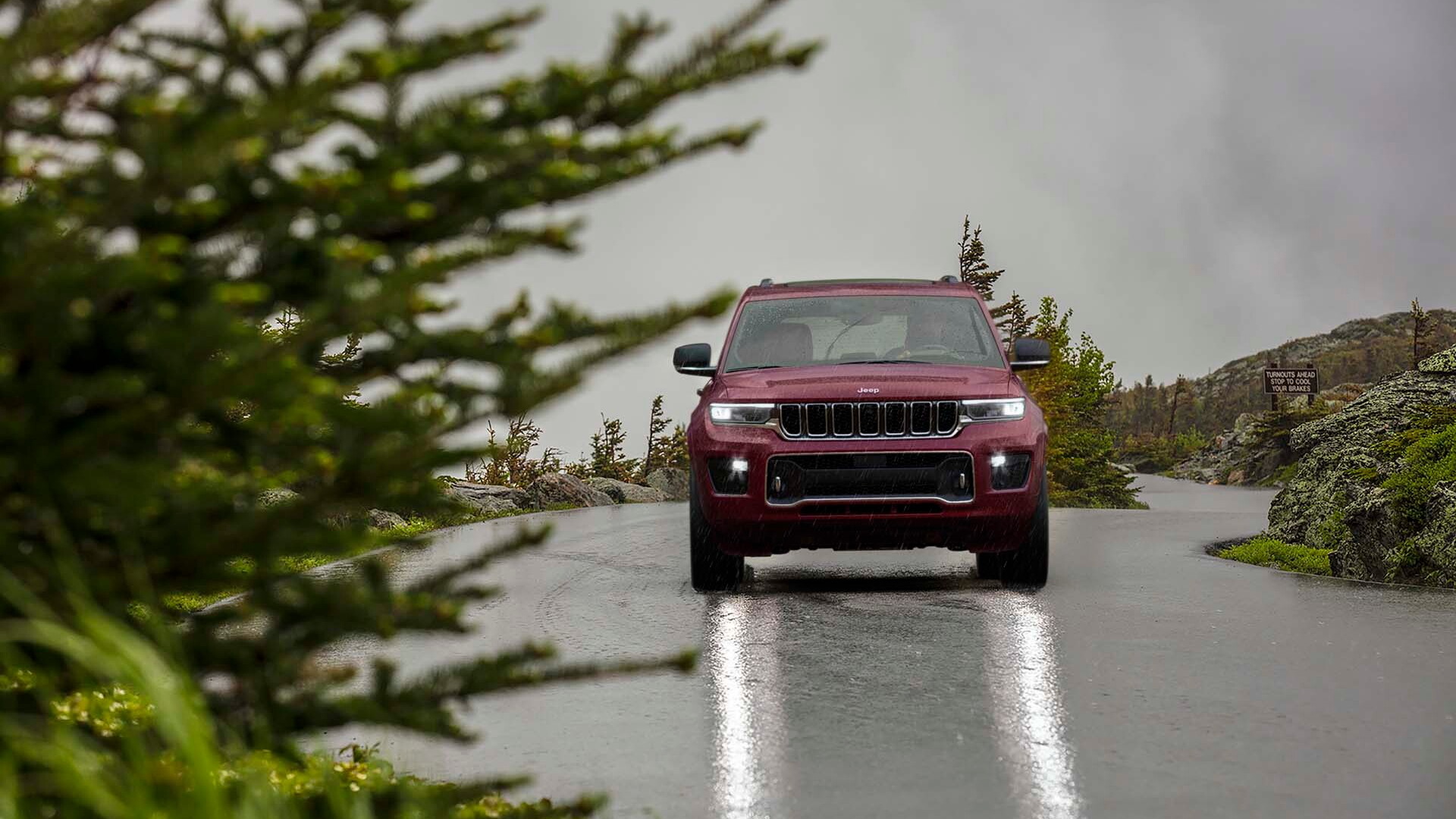 Nearing the top of a gnarly rock hill in the 2021 Jeep Grand Cherokee L, I miscalculate my path and bottom out onto a large stone as I drive onto the dirt at the top. Feeling bad about my mistake, I tell a nearby Jeep representative I’m sorry.
“That’s OK,” he replies. “We can make more skid plates.”

The 2021 Jeep Grand Cherokee L is a new three-row version of the venerable Jeep. It’s bigger and more mature, but that doesn’t mean it’s not equally at home off road as it is on pavement.

The Grand Cherokee L is the first of the fifth-generation Grand Cherokees, with a two-row version coming later this year. It’s a smart way to improve sales for the model, as Jeep says the number one reason buyers didn’t choose the last-generation model was the lack of a third row. It’s also the first three-row Jeep since the ill-fated Commander of 2006-2010, but it will soon be joined by another three-row money maker, the larger, body-on-frame Wagoneer.

I’m in an Overland model with the optional Off-road group that adds an electronic limited-slip rear differential, 18-inch wheels with Michelin Primacy XC A/S tires, and skid plates for the gas tank, transfer case, front suspension, and underbody. I bashed one of them, but the big crossover is no worse for wear.

As an Overland it also gets a unique front fascia with a better approach angle, hill descent control, an air suspension with five modes and 4.2 inches of lift, adaptive dampers, and front tow hooks. Of course, for off-roading duty, this tester is also equipped with the Quadra-Trac II four-wheel-drive system with a 2-speed transfer case.

The Selec-Terrain system that comes with four-wheel drive has five traction modes, but I’m in Rock mode, which shifts to low-range gearing to enable a 44:1 crawl ratio. The air suspension is also in its Off-road 2 setting, which raises the ground clearance from a standard 8.5 inches to 10.9 inches. That ride height creates approach, breakover, and departure angles of 30.1, 22.6, and 23.6 degrees, respectively. While those numbers can’t match the outgoing two-row model’s figures, they’re still enough to handle an arduous off-road run.

My rock-bashing escapade came at the end of a trail that included hill climbs, hill descents, and off-camber exercises all approaching 30-degree angles, a dip through deep water, and some intricate rock crawling. The Overland handled them all well, despite a few scrapes on those replaceable skid plates. The new Grand Cherokee L’s bona fides seem to be intact, new generation or no.

The air suspension is also a boon to on-road dynamics, which is important because Jeep engineers softened up the suspension. Standard in the Overland and Summit models, it comes with adaptive dampers that can firm up in the available Sport mode, which also lowers the ground clearance from 8.5 to 7.7 inches. The suspension upgrade helps the Grand Cherokee L feel tied down and responsive to driver inputs through fairly direct steering. It’s not as firm as the outgoing two row model, which makes the ride comfortable even with the available 21-inch wheels, but it also it’s quite as quick to react and it doesn’t provide as much road feel.

The softened suspension hurts the handling with the base steel suspension in the Laredo and Limited models, which tend to float on the freeway and lean a little too much in corners. The standard 18-inch tires contribute to a very smooth ride. On both the base and air suspensions, Jeep could stand to firm up the dampers.

It seems the new EUV platform could handle that tuning. Jeep says the rear- and all-wheel-drive unibody platform is completely new, and it’s 13% stiffer torsionally and 18% stiffer laterally. The front subframe is now hard-mounted to the body, and the front axle now runs through the engine oil sump, allowing the engine to sit lower and create a lower center of gravity. Somewhere between the suspension tuning and the bigger body—the L body style is 15.1 longer than the outgoing two-row Grand Cherokee on a wheelbase that is 7.0 inches longer—the Grand Cherokee L isn’t as sporty and controlled as its two-row predecessor.

With the addition of the L, the Grand Cherokee grows up inside and out. The extra length adds two inches of second-row leg room and makes room for a two-passenger third-row seat. The second-row slides fore and aft 7.1 inches to balance space with the third row and its tilt-and-slide function makes it easy to get back there. The interior is big enough for both seating rows to have enough leg room. The third row also has enough head room for 6-foot-2 passengers, and enough shoulder room for a pair of adults to sit back there for trips around town. The seat bottoms sit too low to provide long-trip thigh support, but that’s true of every three-row SUV.

At the top of the lineup, the Grand Cherokee L is outfitted with diamond-quilted leather upholstery and open-pore wood trim, most of the dash and center console are wrapped and stitched, and it gets a synthetic suede headliner. The look and feel would be right at home in an Audi or BMW, and the prices reflect it. The Overland model starts at $54,690 and the Summit costs $63,690.

In the $45,690 Limited and especially the $38,690 Laredo models, though, the wrapping and stitching give way to hard plastics, the open-pore wood is replaced with gloss plastic, and the synthetic suede headliner switches to cloth. The Limited is the more inviting of the two with standard leather upholstery, but the Laredo can hit $45,000 with a pretty drab interior.

The infotainment also matures for 2021 with the new Uconnect 5 system. Its processor is five times faster, and offers up to five home screens that owners can customize with their favorite functions. The digital instrument cluster is customizable as well.

With its L body style, the fifth-generation 2021 Jeep Grand Cherokee is a more comfortable, safer, more luxurious, and more mature family crossover that still wants to get out and play in the mud. It may not be quite as fun on-road and its base interior could use some flair, but the 2021 Jeep Grand Cherokee L can handle a rock bash to its underside like a champ. Bash all you want. Jeep will make more.

Jeep flew us to scenic Detroit, where we drove the Grand Cherokee L and toured its birthplace, for Motor Authority to bring you this first-hand report.