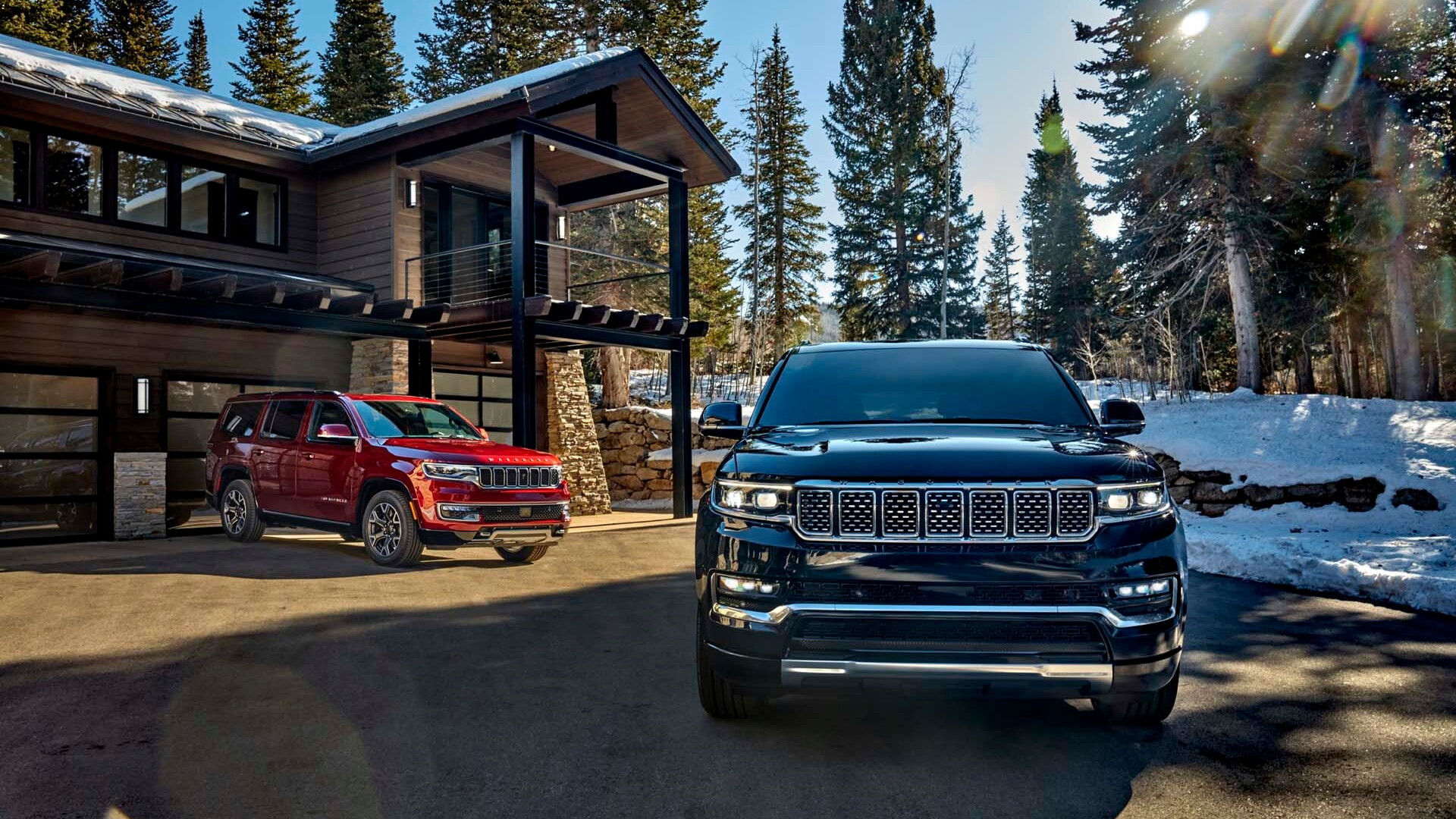 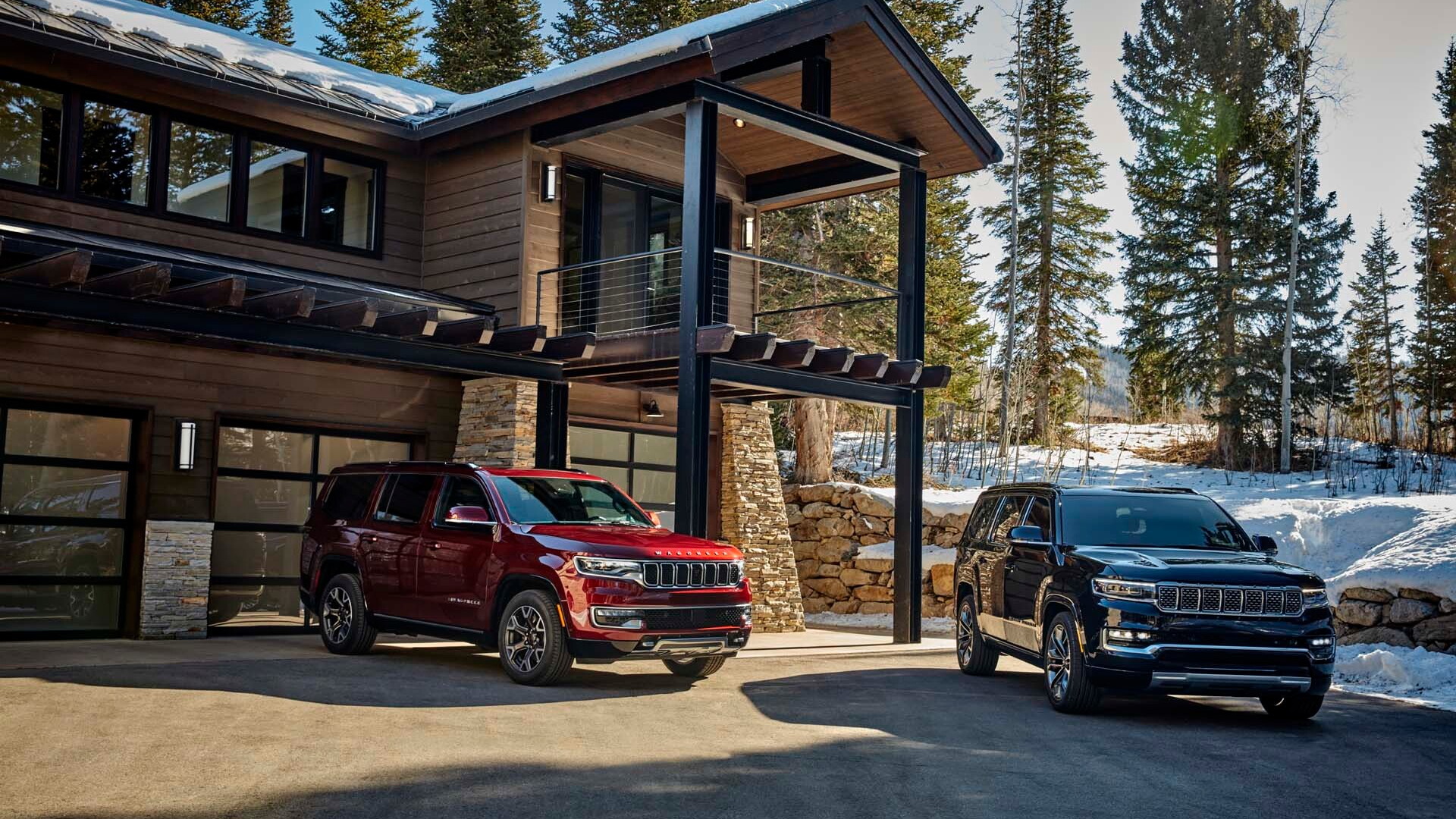 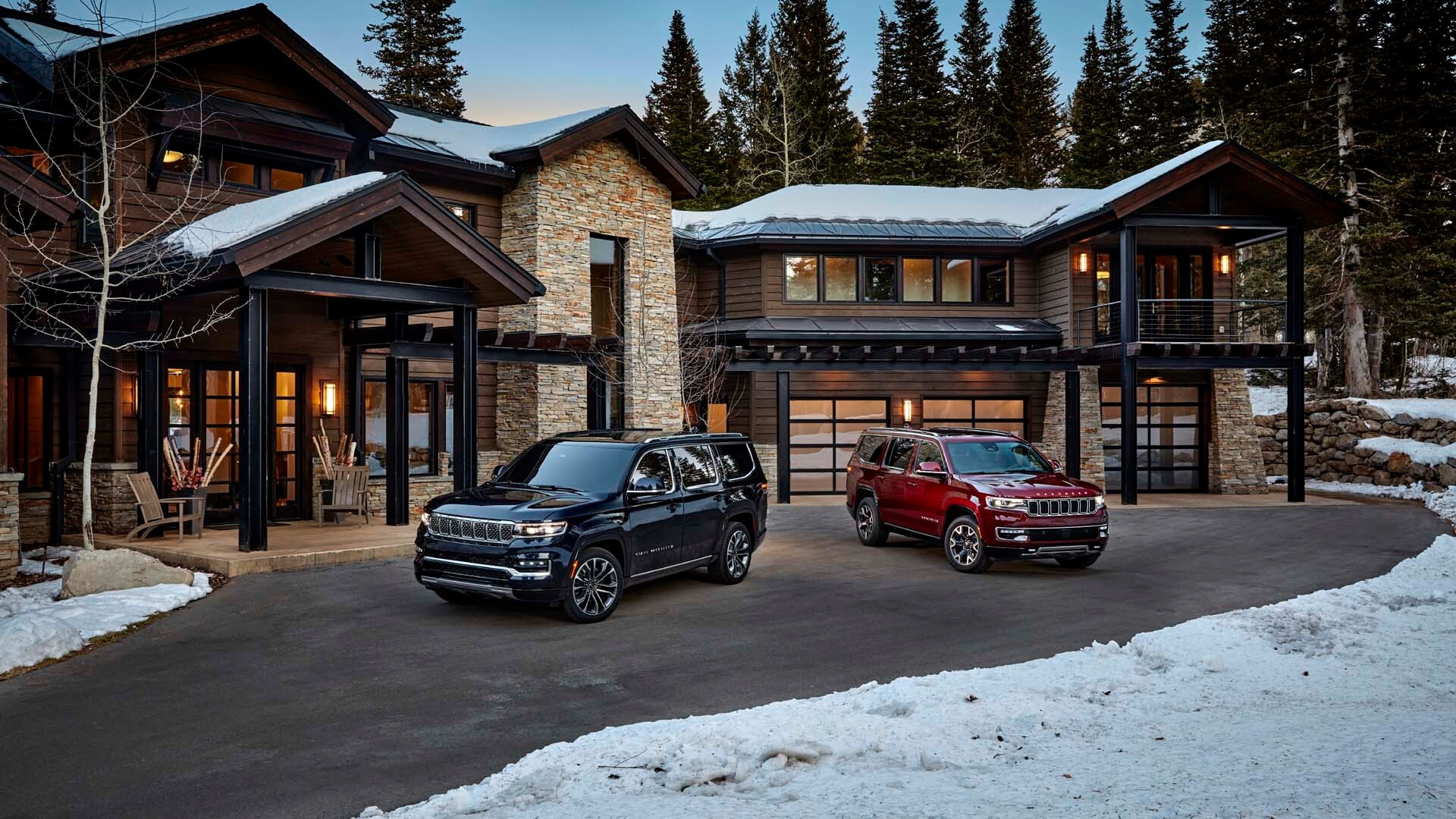 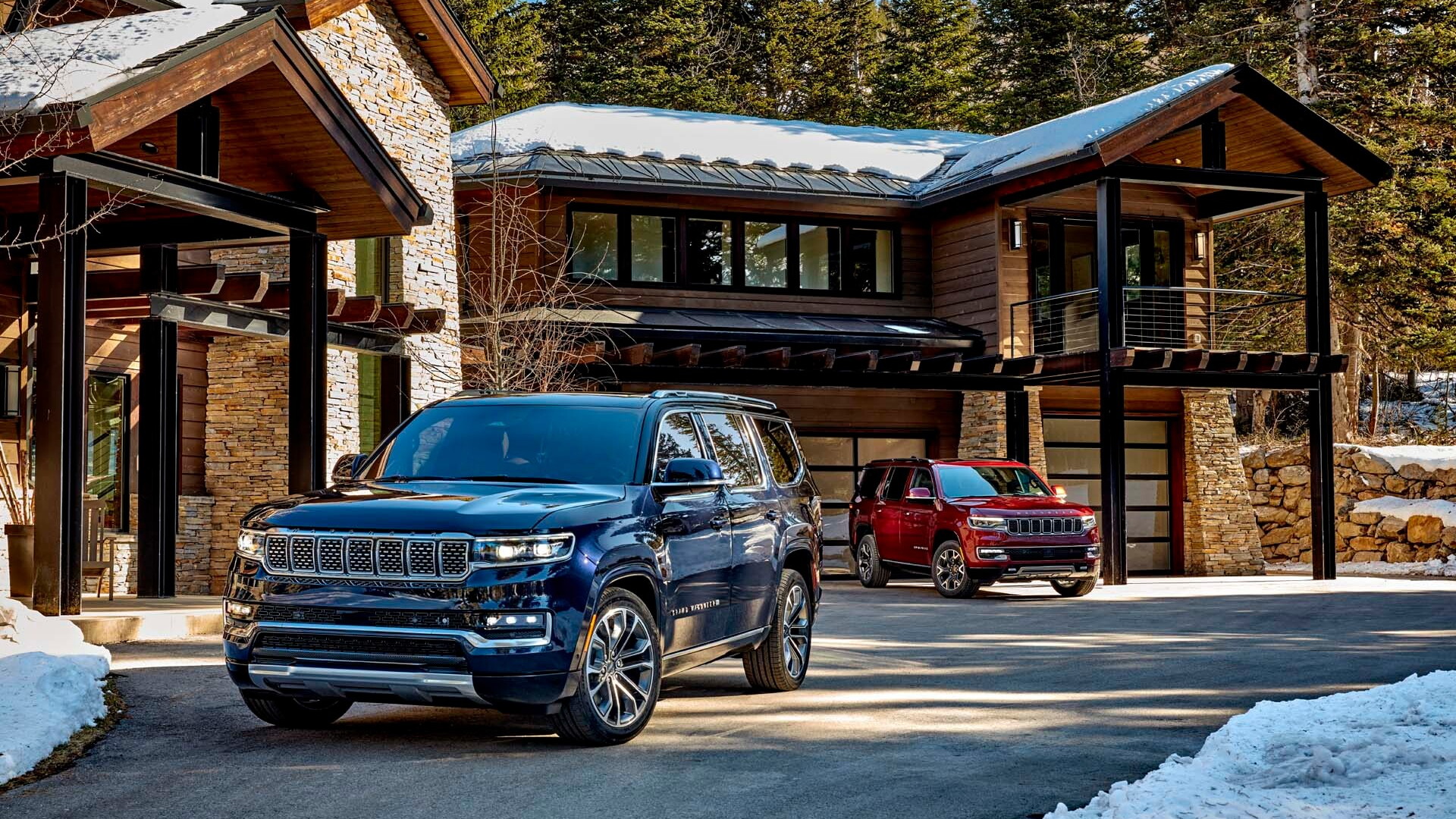 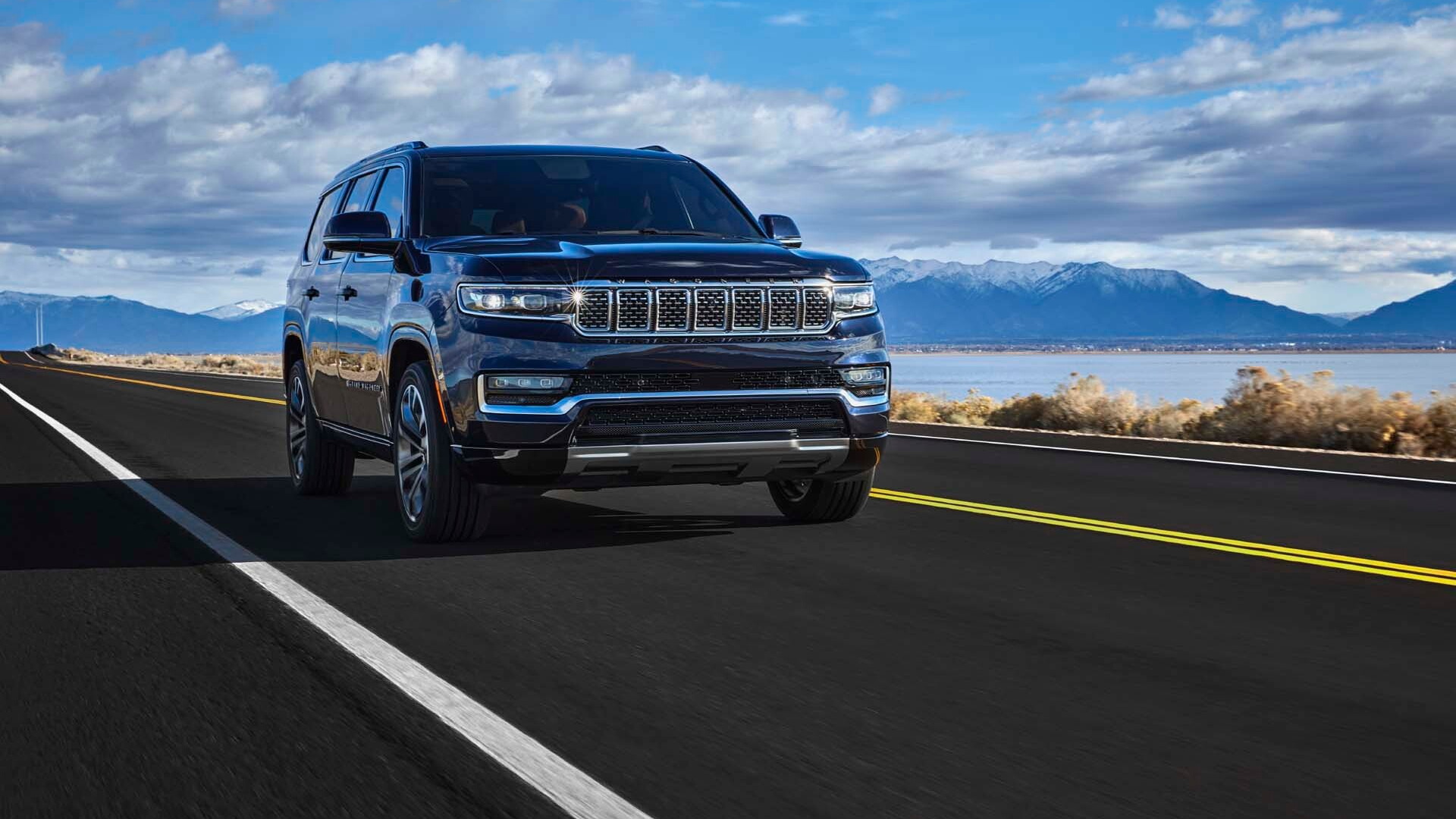 The 2022 Jeep Grand Wagoneer’s pageantry starts with the start button. Jeep rings the button in metal, sets it in the dash, and wraps it in leather accented with contrast stitching. Though small, it exemplifies the care lavished upon the best interior a domestic automaker has to offer. Move over Cadillac Escalade.

Leaving New York on the Palisades Parkway in the 2022 Jeep Grand Wagoneer, I pause to take in the grandeur of the cabin. The top-line Series III model I’m driving sports the beautiful Tupelo color scheme, a NASA command center bank of screens, and a Range Rover price tag.

As a top model with the optional rear entertainment package, my Grand Wagoneer tester sports 75 inches of screens. They include a 12.3-inch digital instrument cluster, a 12.1-inch center touchscreen, a 10.3-inch touchscreen for the front passenger, a 10.3-inch climate control screen at the front of the center console, two 10.1-inch rear entertainment screens, and a 10.1-inch second-row climate screen.

The less expensive Wagoneer models have smaller versions of the instrument cluster and center screens (10.1 and 10.3 inches, respectively), and they forgo the rest of the screens. The lavish appointments also give way to lesser materials. The wood trim isn’t real, the dashpad is molded instead of wrapped though it’s still soft to the touch, and they lack little touches like seat piping and some of the contrast stitching. Still, their fine décor and modern technology best such competitors as the Chevy Tahoe and Ford Expedition.

No matter the screen size, the center screen runs Jeep’s Uconnect 5 infotainment system. Though five times faster than Uconnect 4, it also boasts far more functionality, which could account for the lag I experience when switching between some functions. Drivers can configure up to five screens with common commands and widgets to make them a simple matter of a tap and/or swipe or two.

The front passenger seat boasts the Grand Wagoneer’s party trick. A touchscreen integrated into the dash lets front passengers control some vehicle infotainment functions, stream content from their phones (via a USB cable that requires an adapter), look up navigation destinations and send them to the driver, or stream content from Amazon Fire TV when buyers choose the rear entertainment system. To avoid distraction, the screen can’t be seen by the driver. Only the Cadillac Escalade can compete for screen real estate, and it actually has some features, like augmented reality, that the Jeep lacks.

Altogether, these features create a technologically advanced and luxurious cabin that also abounds with space. With 24-way power controls, heating, cooling, and massaging, the front seats coddle their occupants. Even the seats in the base Wagoneer Series II (a Wagoneer Series I will arrive later to become the base model) have 12-way adjustments, heating, and cooling.

The second row, which comes standard with a bench in Wagoneers and a pair of captain’s chairs in Grand Wagoneers, offers comfort and connectivity, but the third row stands out most. A button on top of the outboard second-row seats tilts and powers them forward to allow easy access to the third row, which can fit three across, has enough head room for 6-footers or even taller, and even offers thigh support for long-trip comfort. It’s the best SUV third row I’ve ever experienced, as the seat bottoms of other third rows sit too low to provide adult thigh support.

While the cabin should gain universal approval, the big Jeep’s design will split opinions. Both models cut a large, imposing shape detailed with Jeep cues: the seven-slot grille, trapezoidal wheel arches, and Easter eggs throughout. The tiered face, forward-canted grille, horizontal lines, and vertical windows swing the hardest, and these elements may not hit with all viewers.

The U-shaped windows, framed by thick B, C, and D pillars trimmed in chrome, reflect the upright chromed look of the original Grand Wagoneer, which ran from 1963 to 1991. A chrome strip along the shoulder line wraps around the vehicle, and dark lower sills, offset by a black roof on Grand Wagoneers, raise the considerable visual heft. Below the sills sit standard running boards, which are power retractable on the Grand Wagoneer. The standard 20-inch and available 22-inch alloy wheels tuck nicely into the wheel wells.

Neither model has any Jeep badges on the exterior.

Though it’s a lot to take in at first glance, the look has grown on me. The brawny lines represent the class well, the chrome bits provide an upscale aura, and it’s unmistakably a Jeep. It works, and the elements of its design accurately reflect the SUV’s luxury and capability.

The three-and-a-quarter-ton Grand Wagoneer can’t combat physics enough to defy the cumbersome and plodding traits inherent to full-size body-on-frame SUVs. All Grand Wagoneers and the Wagoneer Series III come with a four-corner air suspension and adaptive dampers. Base versions have front coil-over shocks and load-leveling rear dampers, and all versions use a five-link independent rear suspension, which improves ride quality.

I can’t comment on the steel suspension because none of the test vehicles have it, but the air suspension, adaptive dampers, and the substantial sidewalls of the 285/45R22 tires don’t absorb bumps and ruts as much as smother them.

They also help make the Grand Wagoneer controllable for its size. Fairly direct steering sends the vehicle on a predictable path and the big SUV doesn’t lean too much in turns, but don’t expect it to handle with the agility of a crossover, fit easily into parking spots, or maneuver well in tight quarters.

A pair of V-8s make the Wagoneer as quick as a typical crossover, or even quicker. The base 5.7-liter V-8 churns out 392 hp and 404 lb-ft of torque, and Jeep's eTorque 48-volt motor-generator can add 130 lb-ft to get the big beast moving from a stop. The Wagoneer hits 60 mph from a stop in a family crossover-like 7.3 seconds, according to Jeep. My butt dyno confirms that figure.

Both engines purr when cruising and growl under heavy acceleration, but road and wind noise are well controlled. The V-8s also get the big SUV moving with confidence. They work well with the smooth ZF 8-speed automatic transmission, which delivers quick downshifts when extra thrust is needed, especially in Sport mode.

They also drink fuel worse than the domestic competition, in part because the big Jeeps weigh at least 300 lb more. The EPA rates the Wagoneer at 15 mpg city, 20 highway, 17 mpg combined with four-wheel drive, and the Grand Wagoneer at 13/18/15 mpg. With four-wheel drive, the Chevy Tahoe gets 18 mpg combined with its 5.3-liter V-8 and the Ford Expedition boasts 19 mpg combined from its twin-turbo 3.5-liter V-6. The Tahoe also offers a diesel that gets 24 mpg combined, though a plug-in hybrid Wagoneer is expected. Buy a big SUV and prepare to pay at the pump.

The Wagoneer’s V-8s and body-on-frame structure contribute to class-leading towing capacity. The front section of the frame derives from the Ram 1500, but Jeep engineers created a center section for the Wagoneer, and developed the rear section to work with an independent rear suspension, which can’t be had on any of the brand’s pickup trucks and isn’t a given in this class.

The Wagoneer’s 10,000-lb towing capacity compares to 8,400 lb for the Chevy Tahoe and 9,300 lb for the Ford Expedition. A quick towing demonstration with a trailer that weighs 7,000 or 8,000 (depending on who I ask) provides little resistance for a Grand Wagoneer, but we’ll reserve our final opinion on towing until we get one to test in our own conditions.

Jeep DNA and a choice of four-wheel-drive systems also give the Wagoneer some off-road ability. All three systems work full time and have five Selec-Terrain traction control settings: Sport, Auto, Snow, Sand/Mud, and Rock. All but the base version also have low-range gearing for low-speed crawling with a 48:1 ratio, and the top version, called Quadra Drive II, adds a limited-slip differential to send the power where it’s needed on the rear axle.

A standard 8.0 inches of ground clearance helps the Wagoneer clear many off-road obstacles, and the air suspension raises the ride another 2.0 inches to drive over larger rocks, logs, and berms.

An off-road course at the drive program shows that the Wagoneer can handle at least mild off-roading. In 4Lo, Rock mode, and at the top ground clearance of 10.0 inches, the big SUV clambers up a 12-degree rock hill with confidence, handles offset deep ruts that set it on three wheels without any noticeable twist, and remains steady while crawling along the side of a hill banked at least 20 degrees. A Grand Cherokee or Wrangler would run through such obstacles with ease, but the short course shows the Wagoneer will have no problems getting to out-of-the-way camping sites.

Jeep charges a lot for all this luxury, space, and capability. Without a Wagoneer Series I at launch, the base price rises to $69,690, far more than the roughly $51,000 buyers pay for base versions of the Tahoe and Expedition. For that money, customers get a well-equipped SUV with nappa leather upholstery, navigation, a 9-speaker Alpine audio system, and 20-inch alloy wheels, among other conveniences. Four-wheel drive adds $3,000, and even when the Wagoneer Series I arrives it will cost about $6,000 more than its domestic competitors.

At the top of the lineup, the Grand Wagoneer Series III runs $105,690 and adds the equipment to at least start to justify the Range Rover price, including quilted Palermo leather upholstery, the front passenger display, a digital rearview mirror, cooled second-row seats, a front console cooler, a 23-speaker McIntosh audio system, and additional driver-assistance features.

Bigger, heavier, less efficient, and better appointed than the competition, the 2022 Jeep Wagoneer and Grand Wagoneer storm into the full-size SUV segment with power and pageantry. They have as much or more capability than their rivals, offer more comfortable cabins, and set a new standard for American luxury.

Jeep paid for airfare and lodging for Motor Authority to bring you this firsthand report.