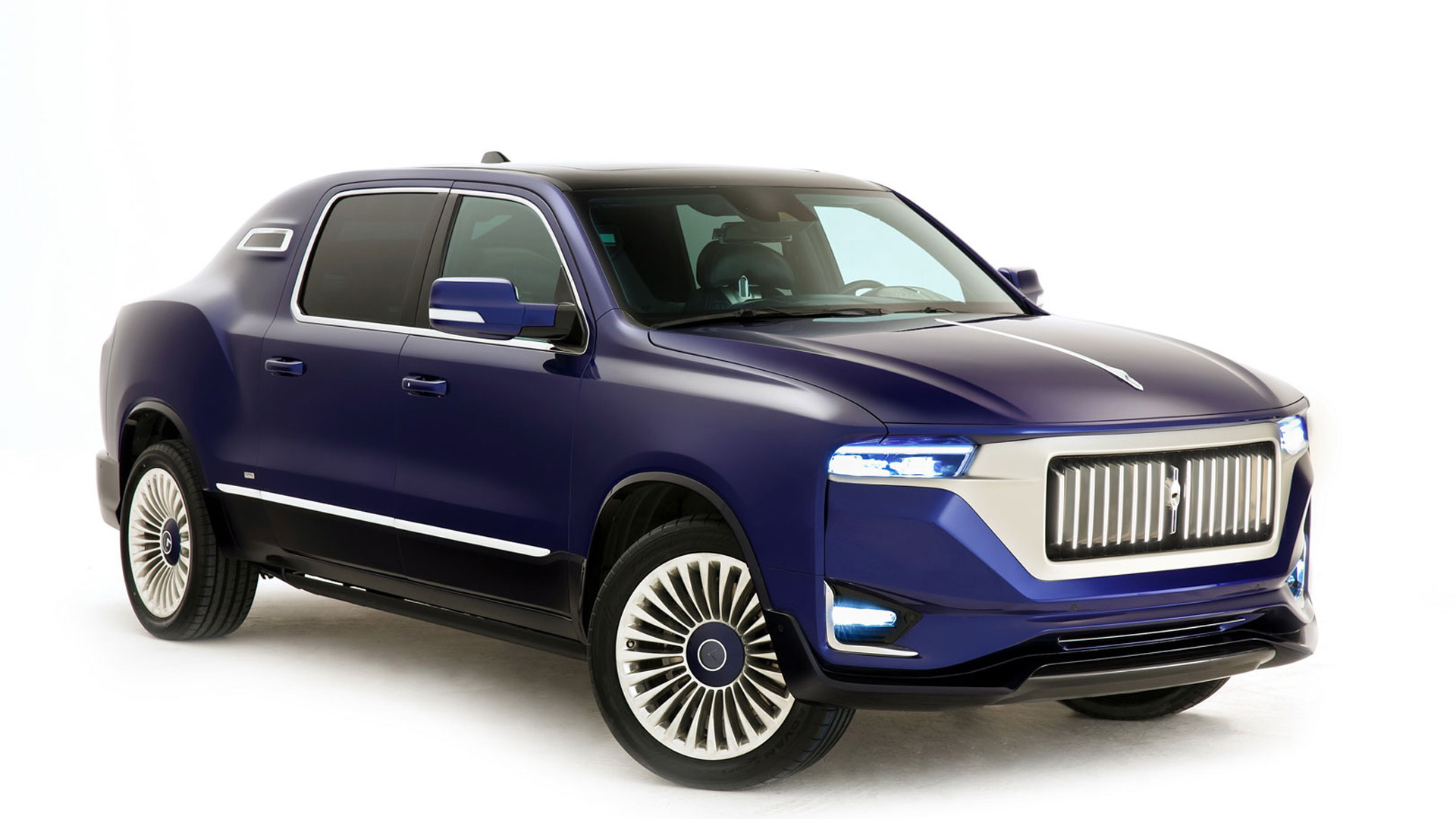 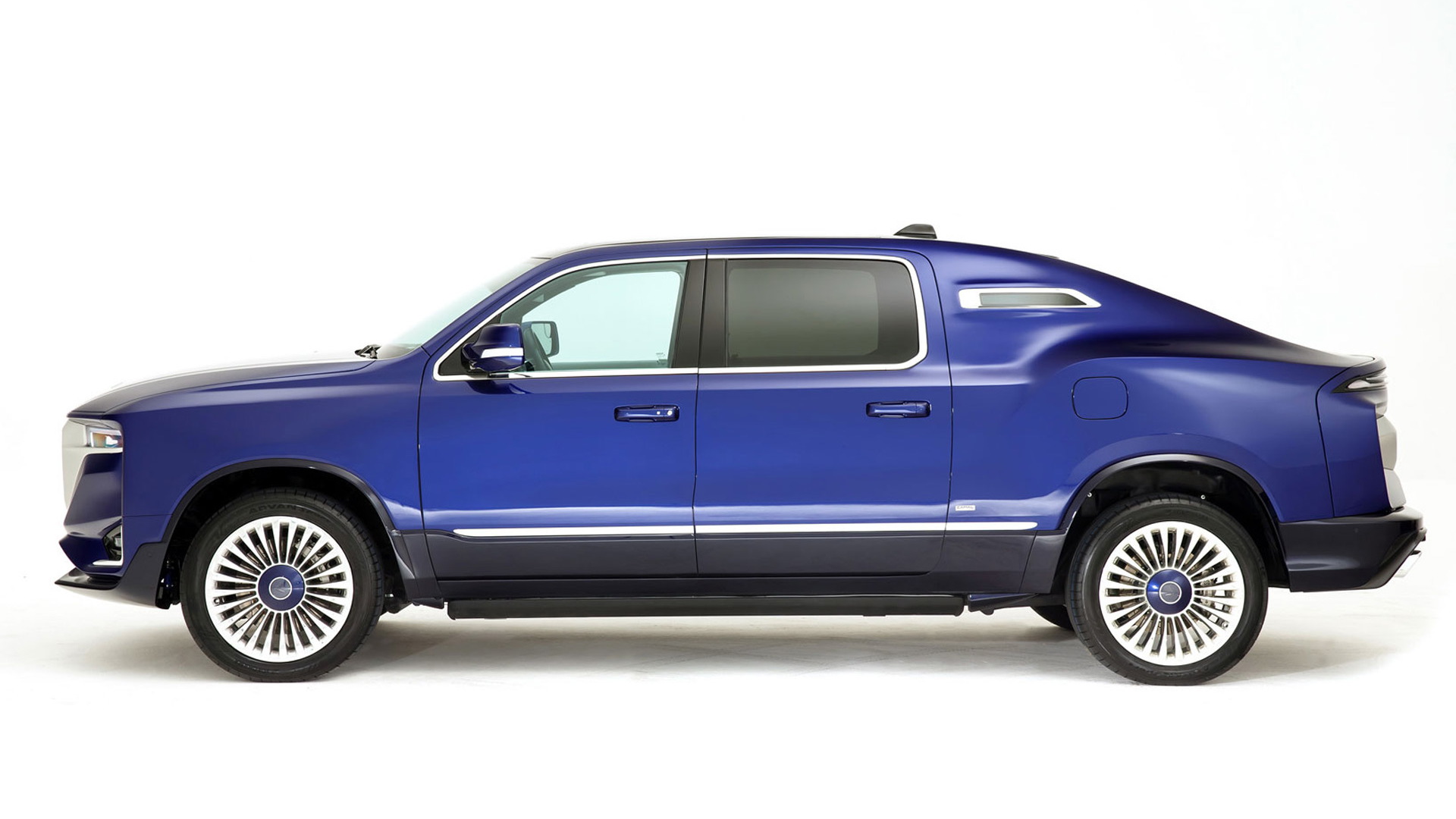 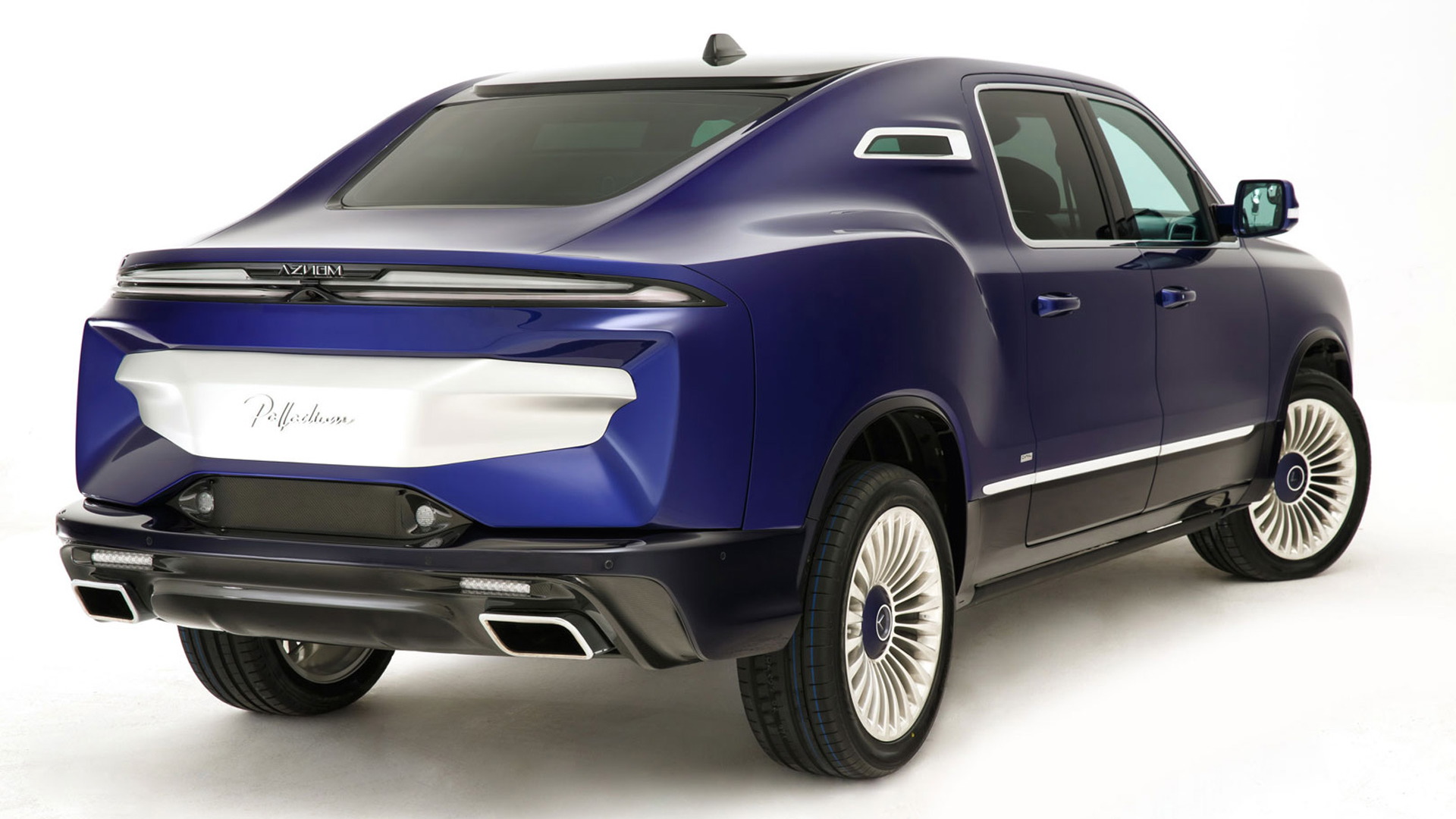 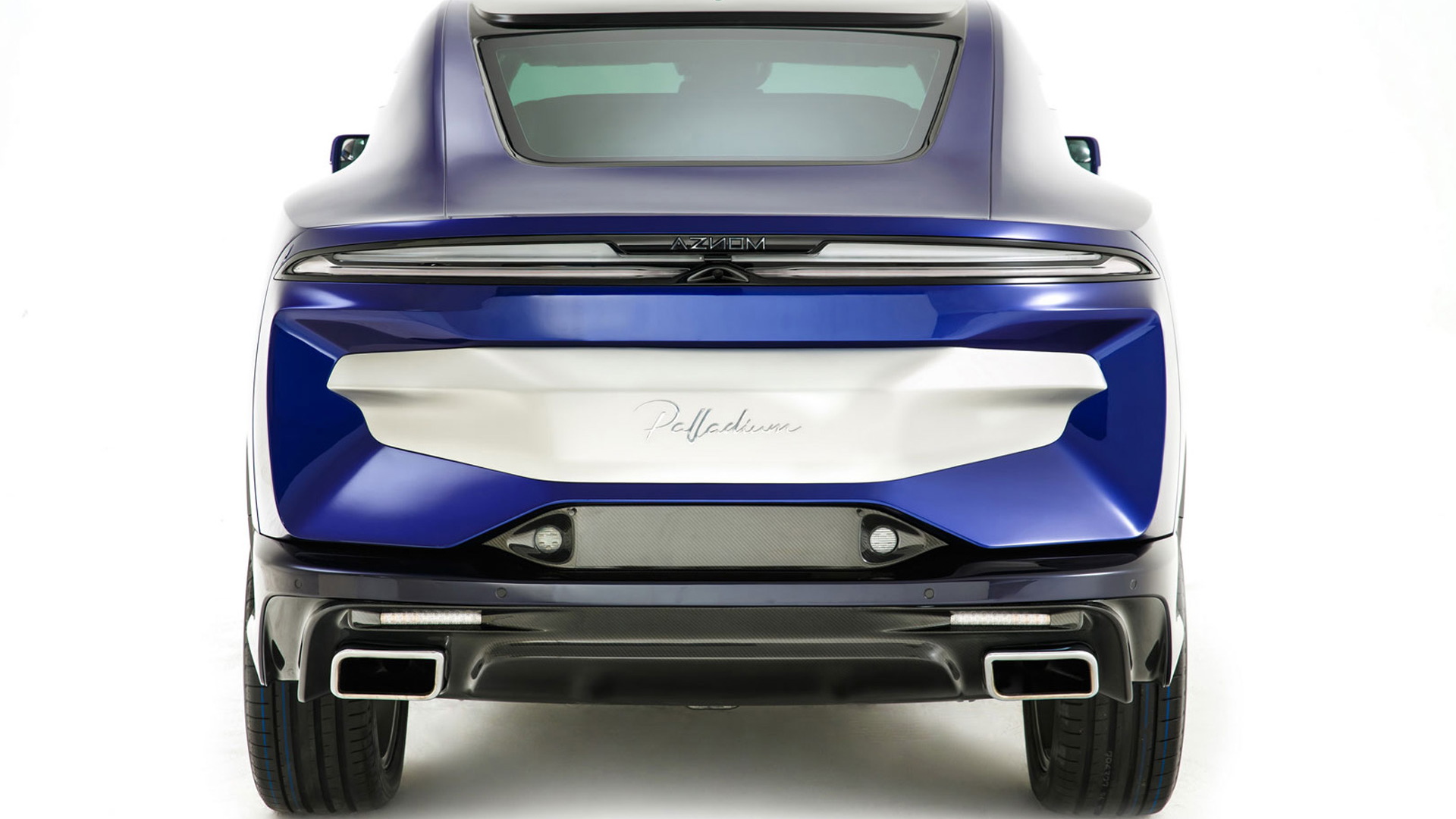 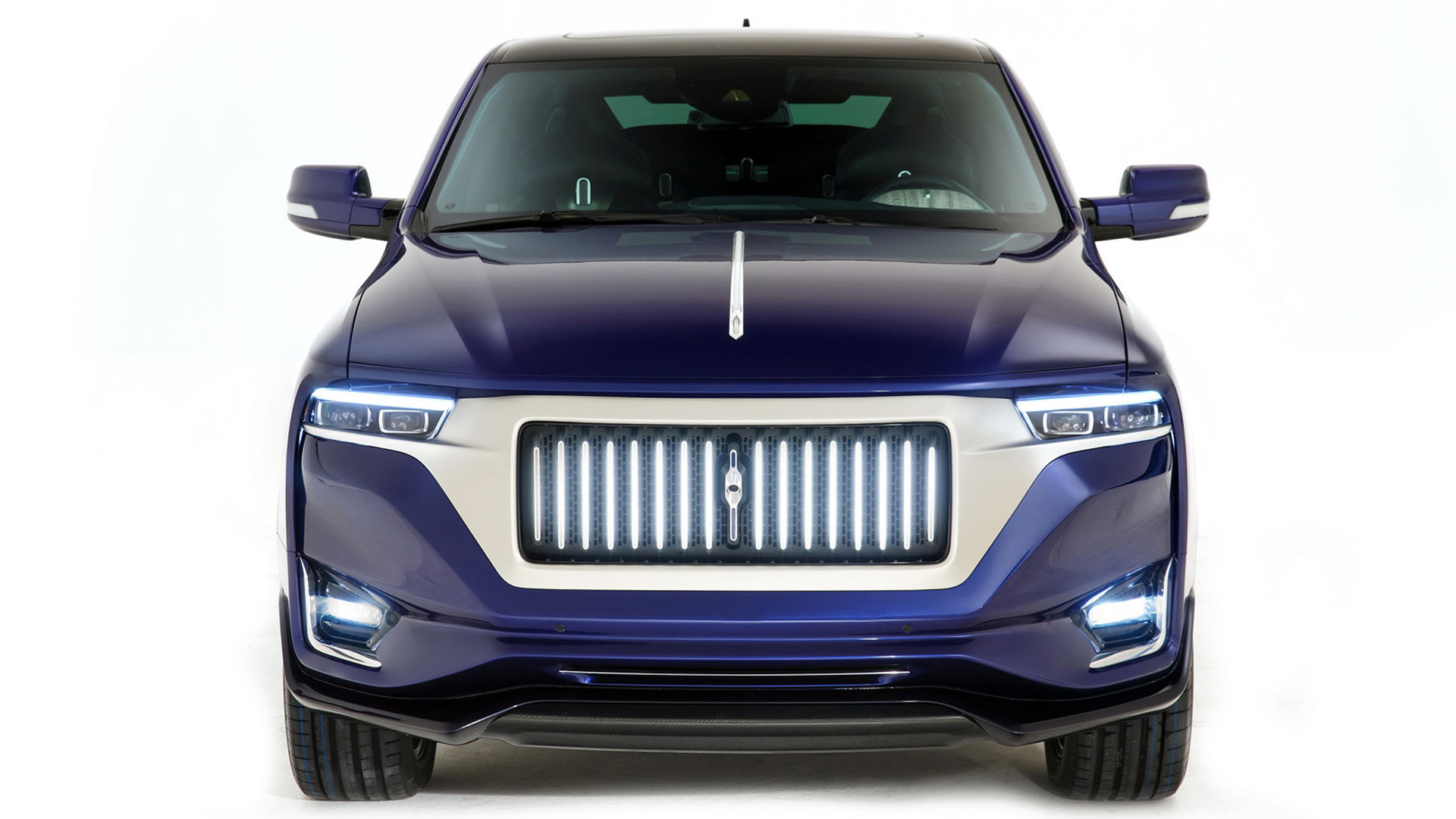 Italian vehicle customizer Aznom has come out with its own bespoke vehicle—a large, luxurious sedan capable of driving both on and off the road.

In case you've forgotten, this is the company that in 2018 unveiled a fully bespoke Ram 1500 costing $263,000. Naturally, Aznom has dialed the luxury factor even higher for its own model.

Aznom's sedan is called the Palladium, and it blends elements of the Rolls-Royce Phantom, Bentley Flying Spur and even the Lamborghini Urus in its design. Responsible for the look was Alessandro Camorali of Camal Studio in Turin, Italy.

The underpinnings come from a humble Ram 1500, though. As a result, the Palladium is destined to be one of the biggest vehicles on the road. We're talking a vehicle with a height of more than 6.5 feet and a length stretching almost 20 feet.

But why a pickup truck as the basis? It turns out Aznom founder Marcello Meregalli has a penchant for huge American vehicles, particularly the truck-based presidential limos built by Cadillac.

For the Palladium, most of the body is constructed from steel, though some elements, such as the hood and roof, were made from carbon fiber to help lower the center of gravity. Reinforcements were added to rear to compensate for the bed, and instead of a traditional trunk the whole rear panel automatically extends to make loading items easy. Independant suspension also features at both ends.

“We have produced this vehicle choosing artisanal manufacturing techniques that are almost lost today, such as panel beating and hand-crafting the body of the car, together with other technological solutions,” Meregalli said in a statement.

Inside is seating for four, with ample space for each occupant. Apart from the layout of the dash, there isn't anything to remind you of the donor vehicle's origins. Almost every surface is lined in plush Foglizzo leather and there are several new amenities including a chilled section for champagne bottles. Buyers also receive a luggage set that uses the same leather and stitching as the interior, as well as an umbrella from Francesco Maglia.

Power comes from a 5.7-liter twin-turbocharged V-8 generating over 700 horsepower and 700 pound-feet of torque. Given the displacement, we're guessing the engine is a tuned version of the 5.7-liter V-8 offered in the donor Ram pickup. The wheels are 22-inch aluminum pieces shod with 285/45-size Yokohama Advan Sport tires and housing Brembo brakes.