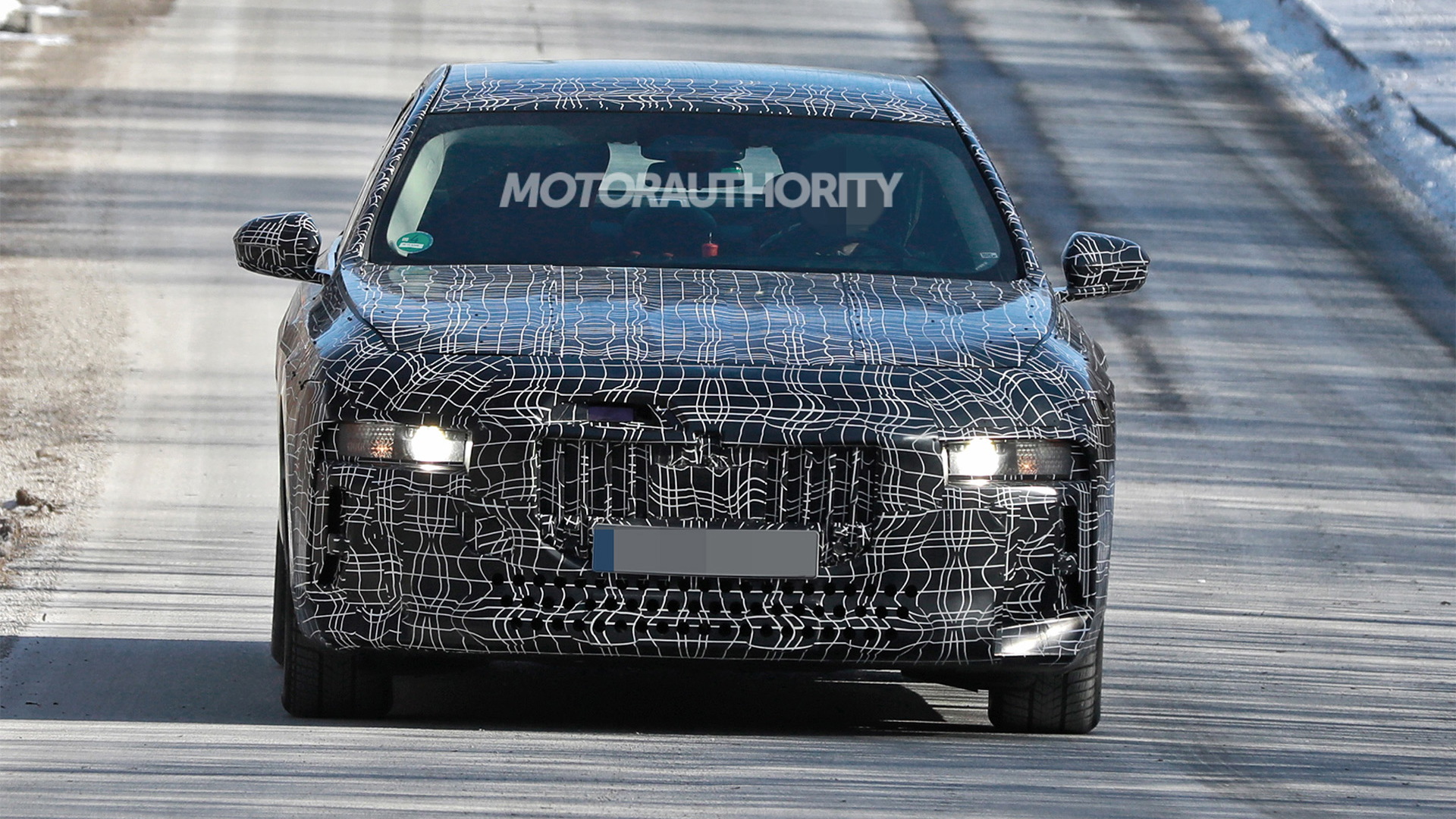 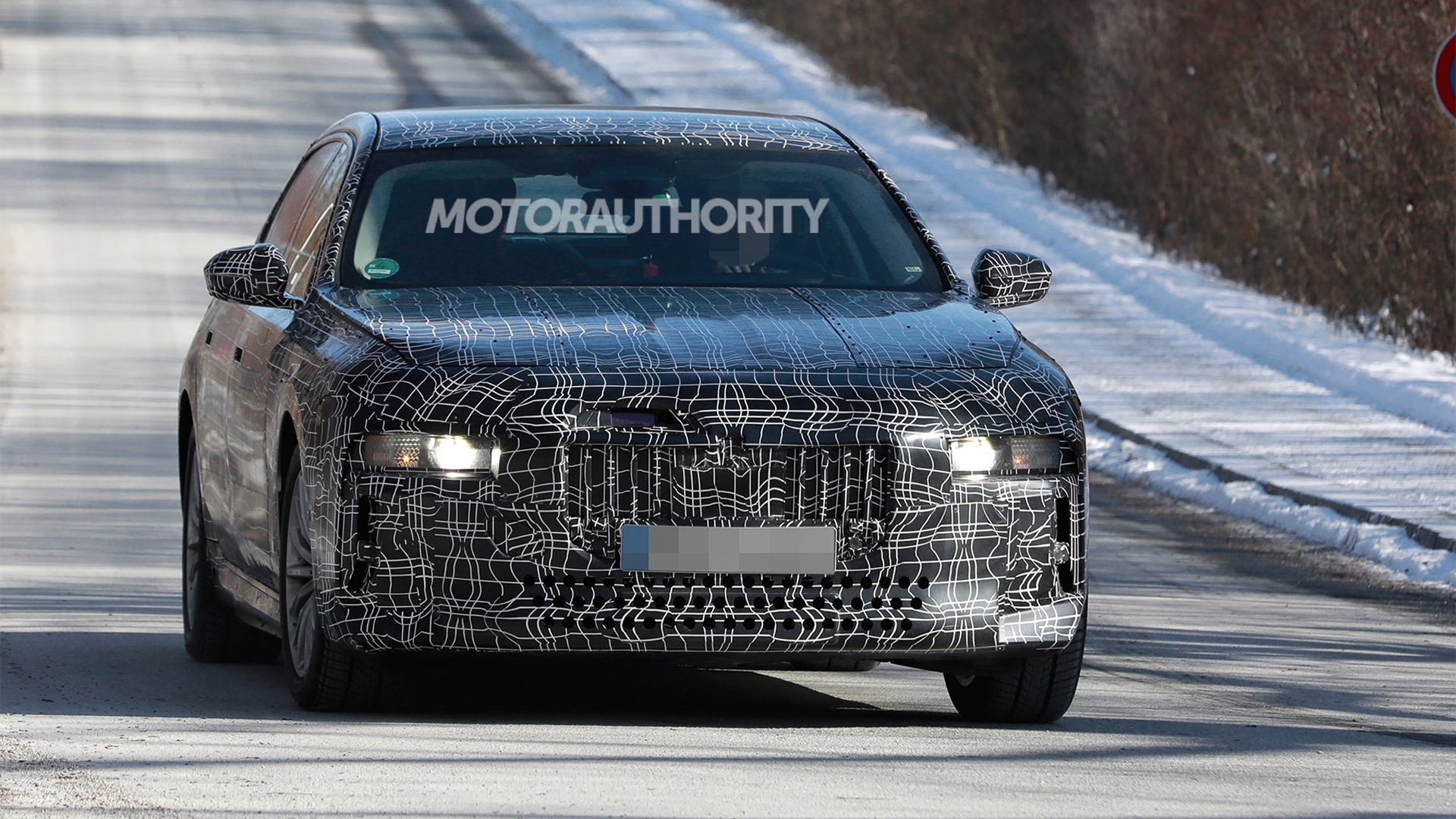 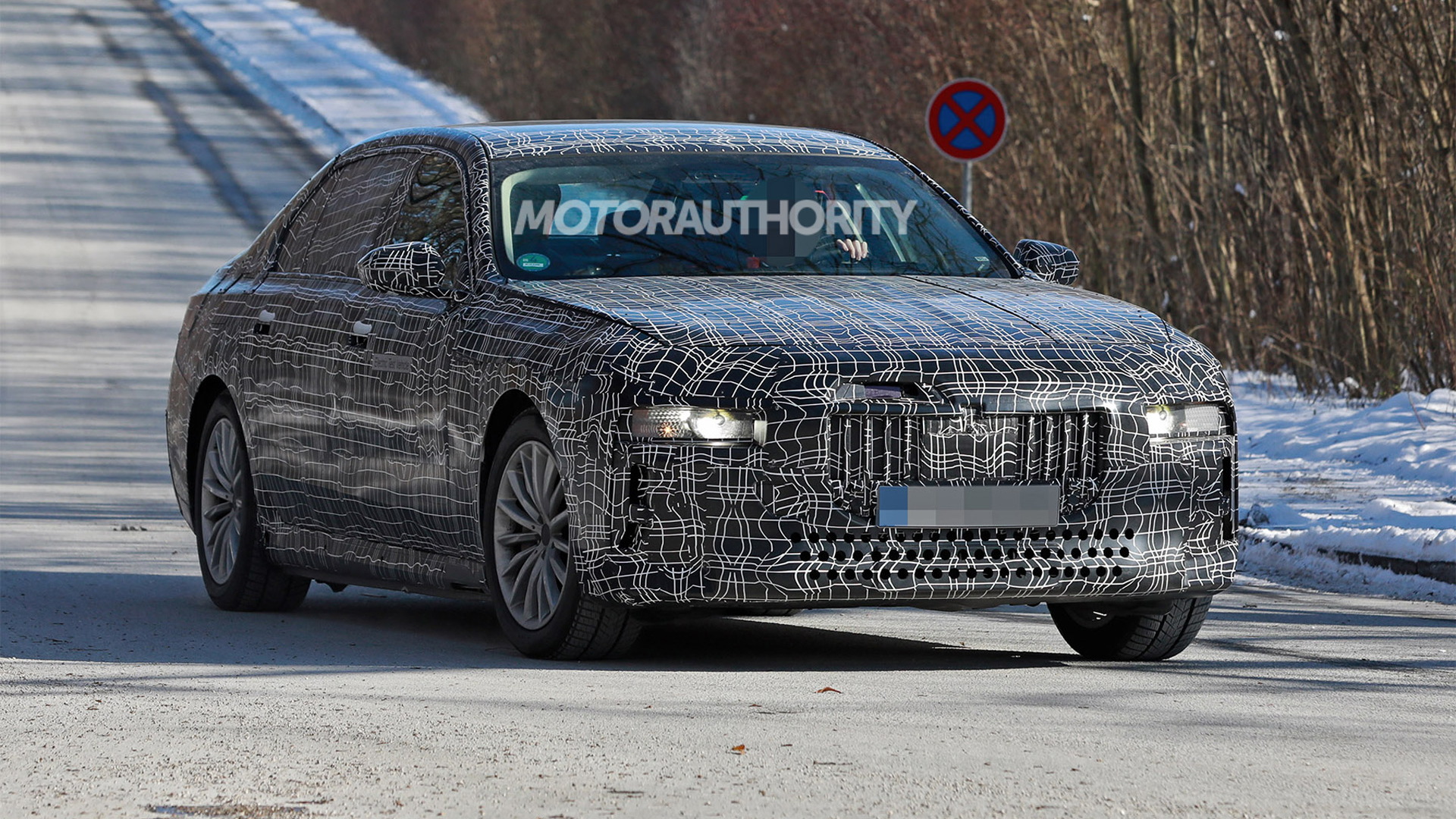 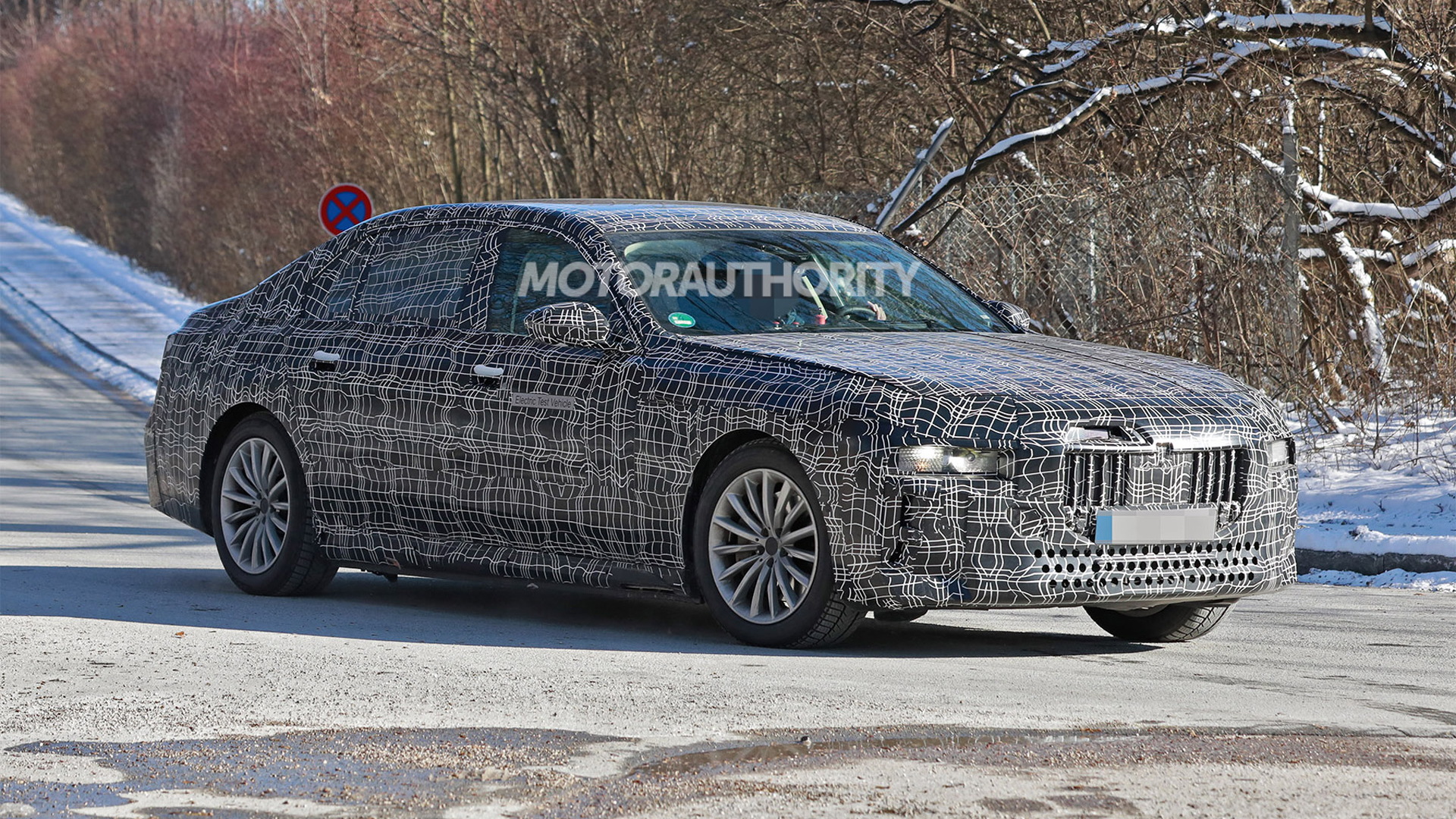 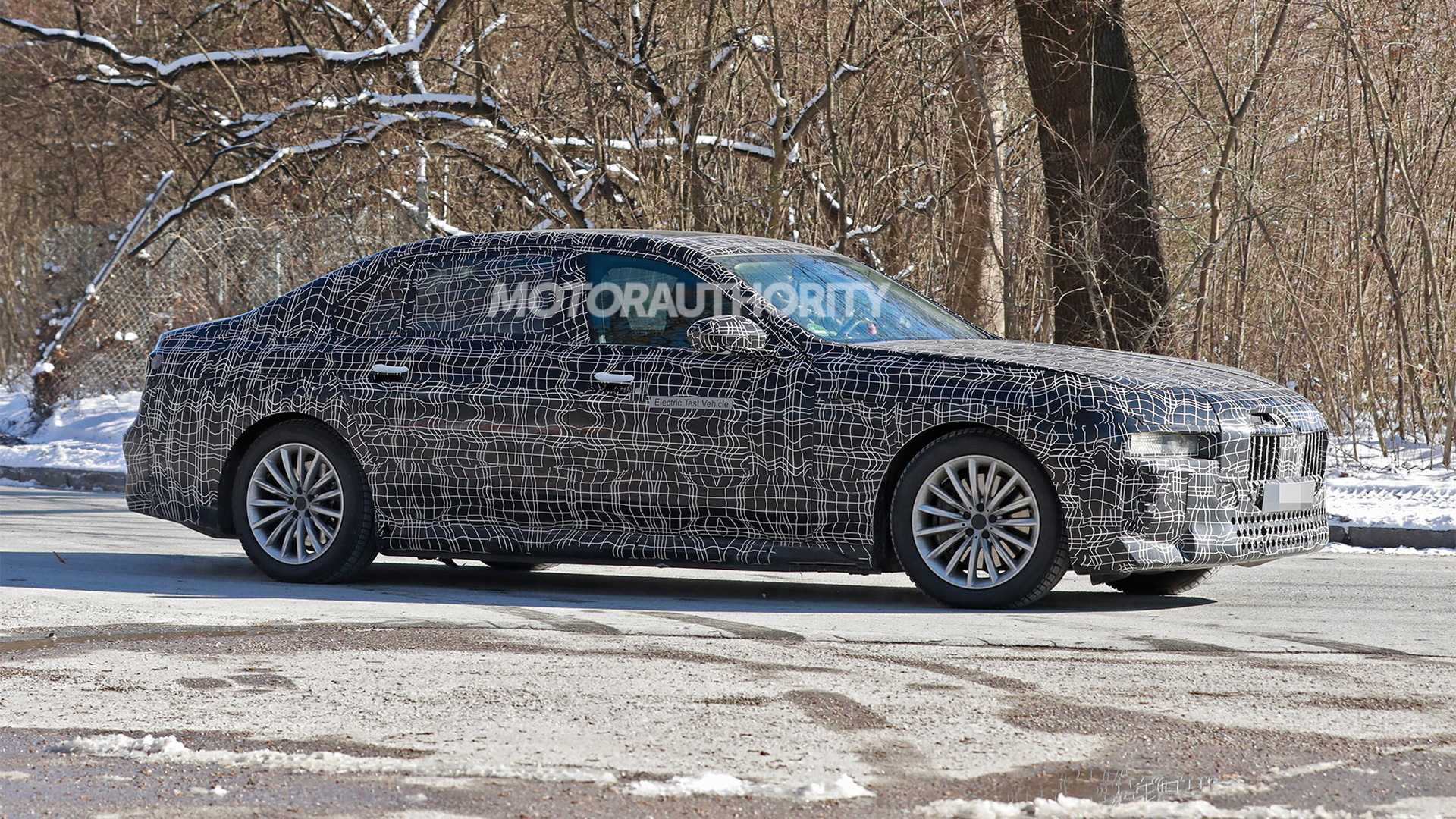 A prototype for BMW's next-generation 7-Series has been spotted again.

The tester is for a battery-electric version that's likely to feature some styling elements distinct to the rest of the 7-Series lineup, like a sealed-off grille. It may also have a unique name, such as "i7." Other shots show prototypes with internal-combustion engines.

There's a lot of camouflage gear to hide the true shape, particularly around the C-pillar to mask the latest take on BMW's signature Hofmeister kink. There is also a rearward facing camera mounted to each of the front fenders, as well as multiple cameras and a large sensor in the grille area.

The latest spy shots show the true shape of the grille, which is reminiscent of the design on the recently revealed iX battery-electric SUV. The protruding, shark nose design meanwhile looks to have been inspired by the Pininfarina-styled Gran Lusso Coupe concept from 2013.

The resulting design should be much grander and more dynamic than the somewhat staid look of the current G11 7-Series.

Underpinning the vehicle will be an updated version of the current 7-Series' CLAR platform which is flexible enough to support multiple powertrain types. For the electric 7-Series, BMW will use its fifth-generation battery and electric powertrain technology which debuted last year in the iX3 SUV sold overseas.

The technology supports batteries with up to 120 kilowatt-hours of capacity, or enough for a range approaching 400 miles. BMW's battery partners include CATL, Samsung SDI and Northvolt.

The powertrain will rely on modular drive units that combine the electric motor, transmission and power control unit into a single housing. Three of these drive units developing over 720 hp combined motivated the 5-Series demonstrator BMW unveiled a couple of years back; two powered the rear wheels independently, allowing for torque vectoring control, and one powered the front pair. Such a system allows BMW to scale power output and add all-wheel-drive capability for individual models by simply adding or subtracting powertrain modules. In the iX, two of the drive units deliver about 500 hp.

Other powertrains destined for the next-gen 7-Series should include mild-hybrid and plug-in hybrid setups. A V-8 in mild-hybrid configuration is a sure bet but the jury is still out on whether a V-12 will still be around. However, a senior BMW exec as recently as 2019 said the company had no plans to abandon the big engine.

Look for the next-gen 7-Series to arrive in 2022 as a 2023 model. The battery-electric i7 should be available at launch.