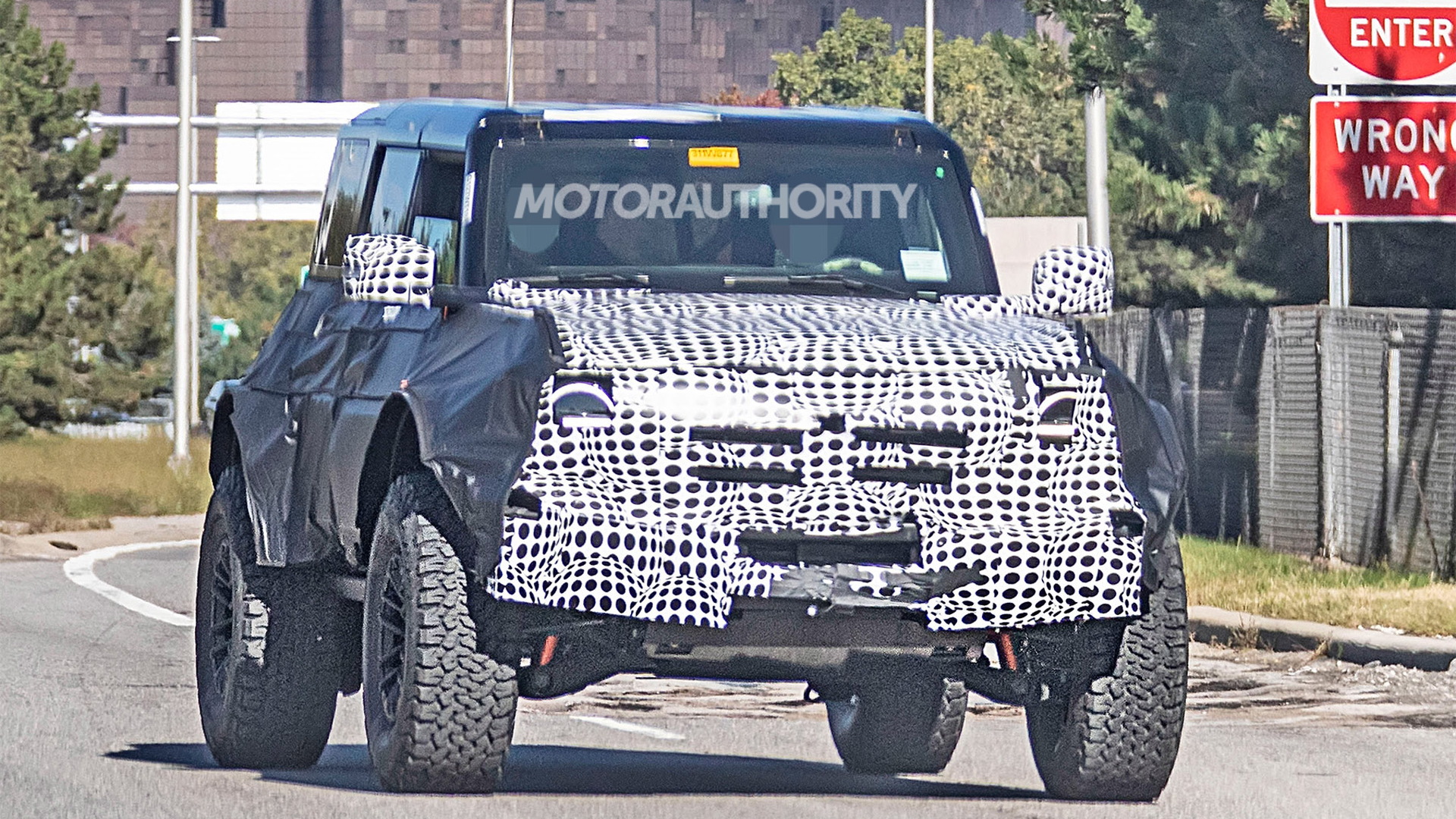 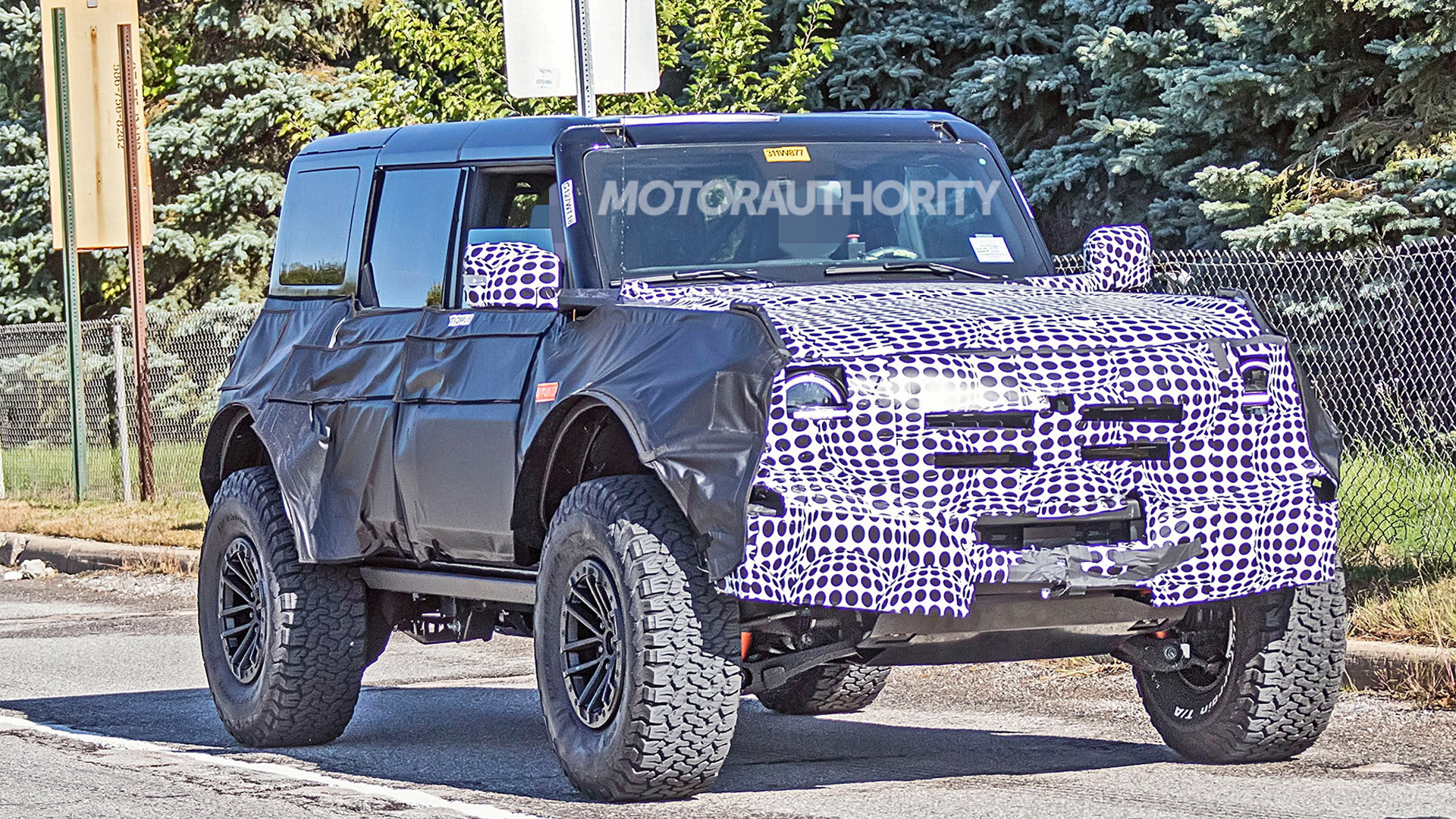 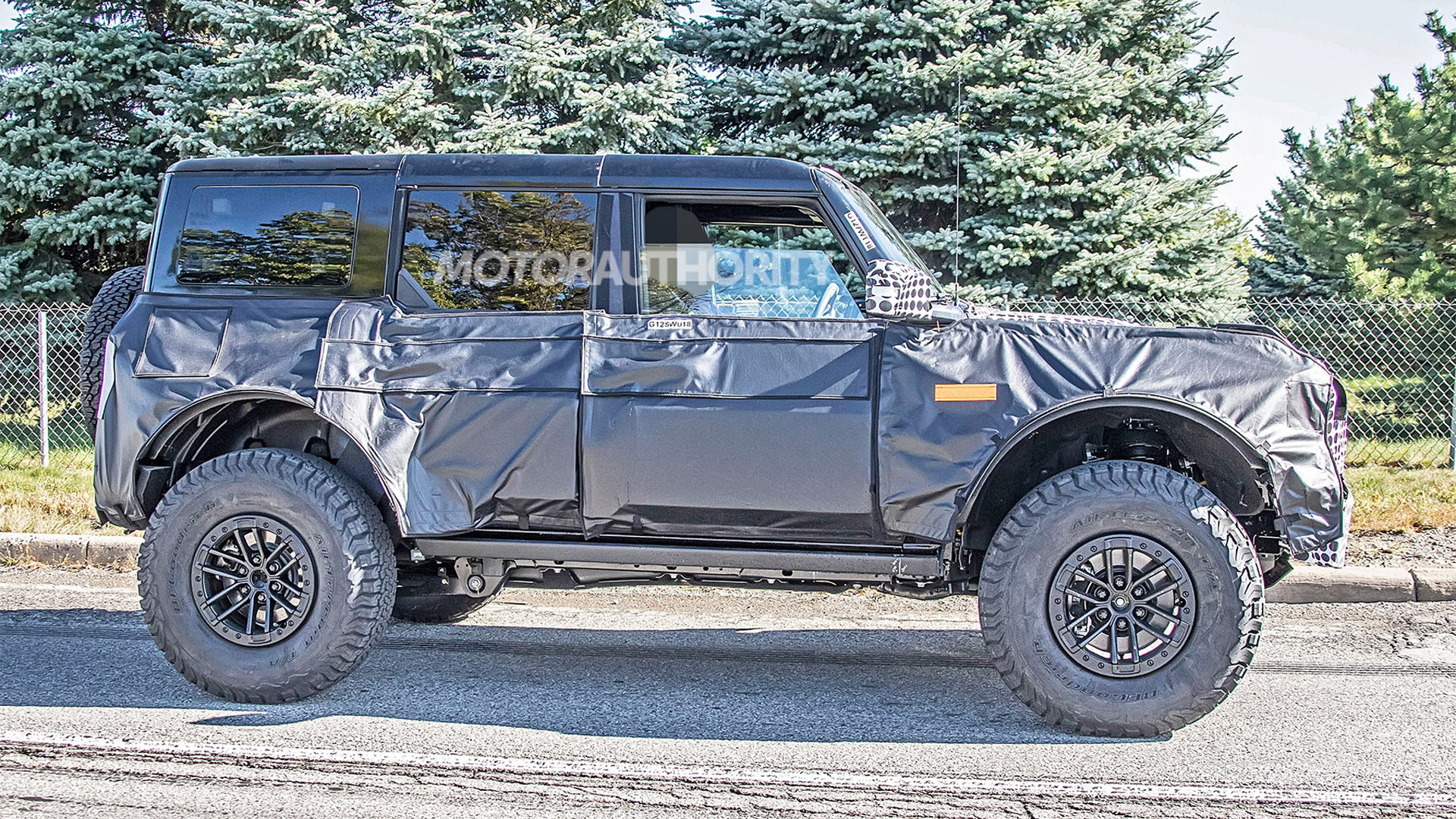 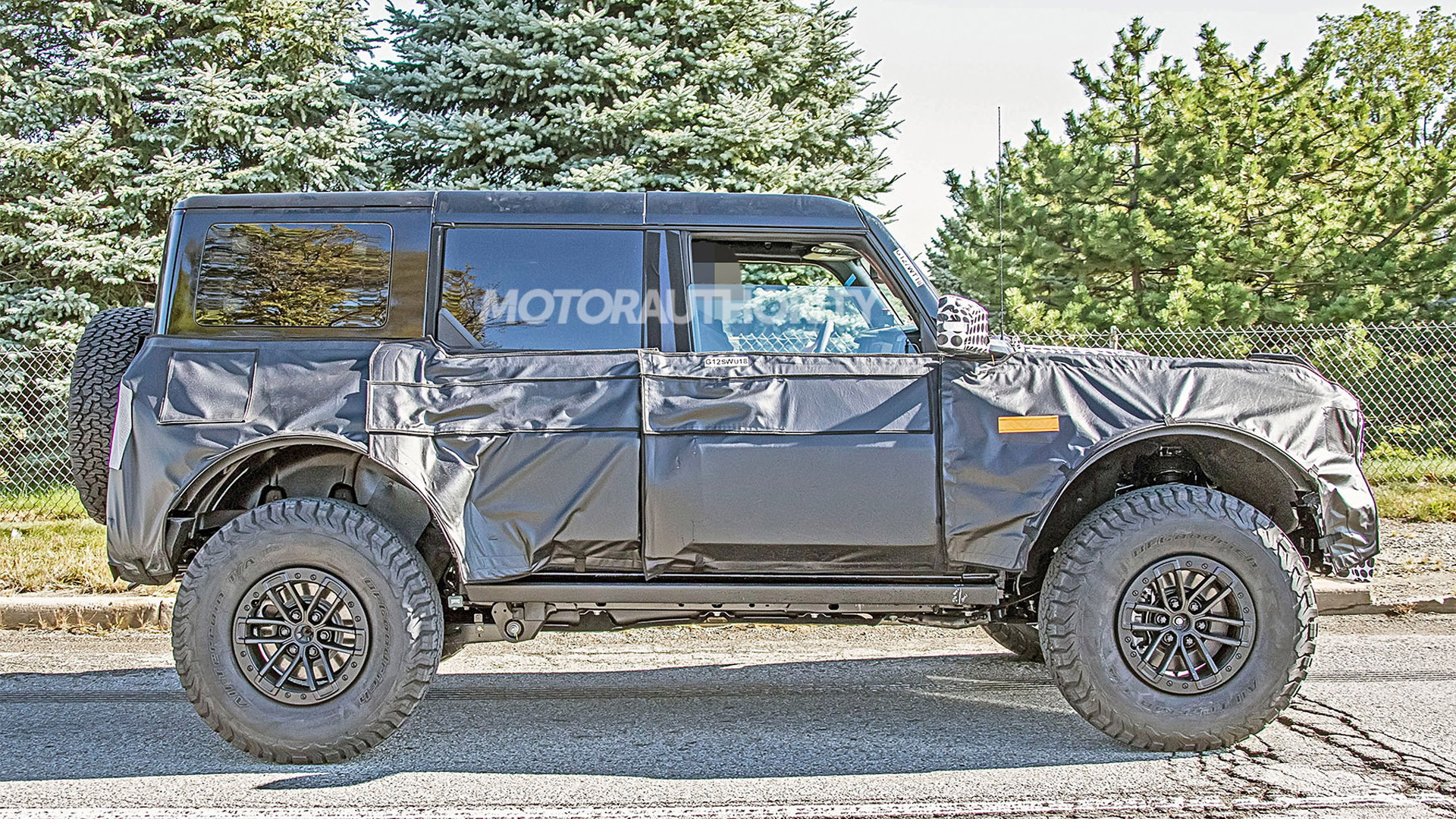 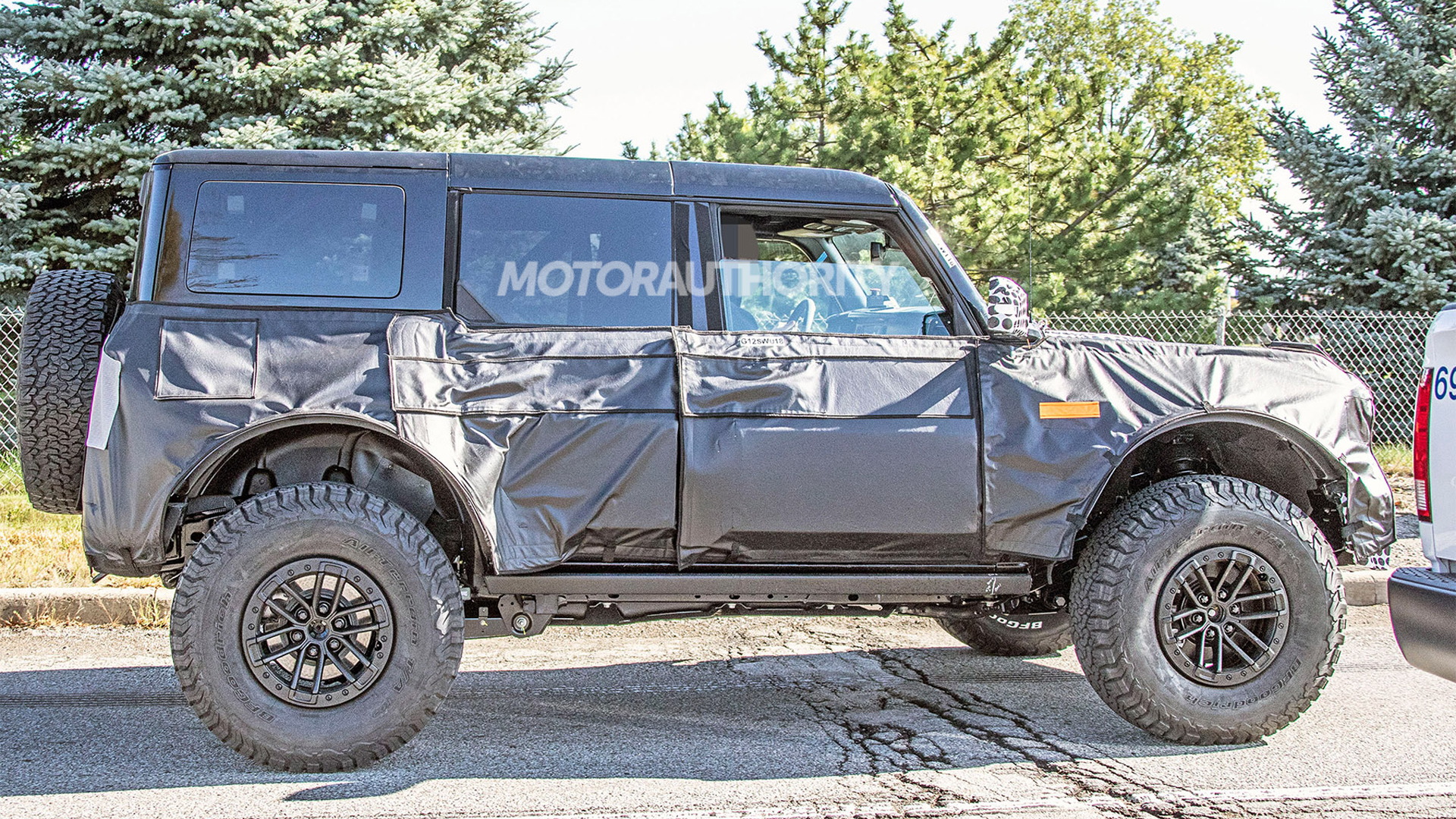 The Ford Bronco has returned as a family of off-roaders, but there’s room for more.

Last summer, the 2021 Ford Bronco was revealed in two- and four-door forms alongside the smaller 2021 Bronco Sport with turbocharged powertrains, four-wheel drive, and off-road capability.

Ford’s not done. A higher-performance Bronco has been in the mail since day one. Ford teased the potential Bronco Raptor (or Warthog) flying through the air last September. Now, the off-roader has been spotted roaming the streets of Michigan, with a related Ranger Raptor seen testing alongside it in some of the shots. (Ford's upcoming redesigned Ranger is a twin under the skin with the Bronco.)

Here’s how a more capable Bronco might take shape.

Suspension and other hardware

The Bronco is available with 35-inch off-road tires, Bilstein shocks, and high-performance off-road suspension. That’s where today’s Bronco ends and the high-performance variant would begin. Camouflaged prototypes are rolling on Sasquatch-spec 35-inch tires. The BFGoodrich K02 all-terrain tires are LT315/70R17s.

The spy shots show orange shocks, which are likely the electronically controlled Fox 3.0 bypass shocks from the current F-150 Raptor. These shocks have active damping, external bypass technology, and a 9-chamber design.

What’s in a name? The Bronco is sold in six grades, including base, Big Bend, Black Diamond, Outer Banks, Wildtrak, and Badlands.

Reach into the Bronco’s history and there aren’t a ton of terrific historical nameplates to add for a high-performance variant. Eddie Bauer anyone?

In 1965 Ford introduced the 1965 Bronco Dune Duster and displayed it at the Detroit auto show. It featured an NHRA-approved roll bar with integrated headrests along with exposed chrome exhaust pipes—and walnut appliqués. The dashboard featured suede padding and walnut-trimmed control knobs. It wasn’t an off-roader, but the name would be fantastic for a high-performance desert runner.

Ford’s built a truckload of brand equity with the Raptor name. A Bronco Raptor could work, but Ford might reserve it for its  pickup trucks. YouTube channel RevMatchTV has reported that the Raptorized Bronco might be called the Bronco Warthog, which would make a lot of sense as, like Raptor, it uses a tough animal as its name.  Ford added fuel to the rumor fire when it filed a trademark application last Sept. to use the Warthog name on a vehicle.

Historically, the Raptor variant of the F-150 has lagged by a year or two, but Ford seems hot to trot with the Bronco and wants to keep this horse bucking. With a teaser image already released, it's likely the high-performance Bronco will debut within the year. We'd expect the Bronco Raptor (or Warthog) to land at dealerships as a 2022 model.