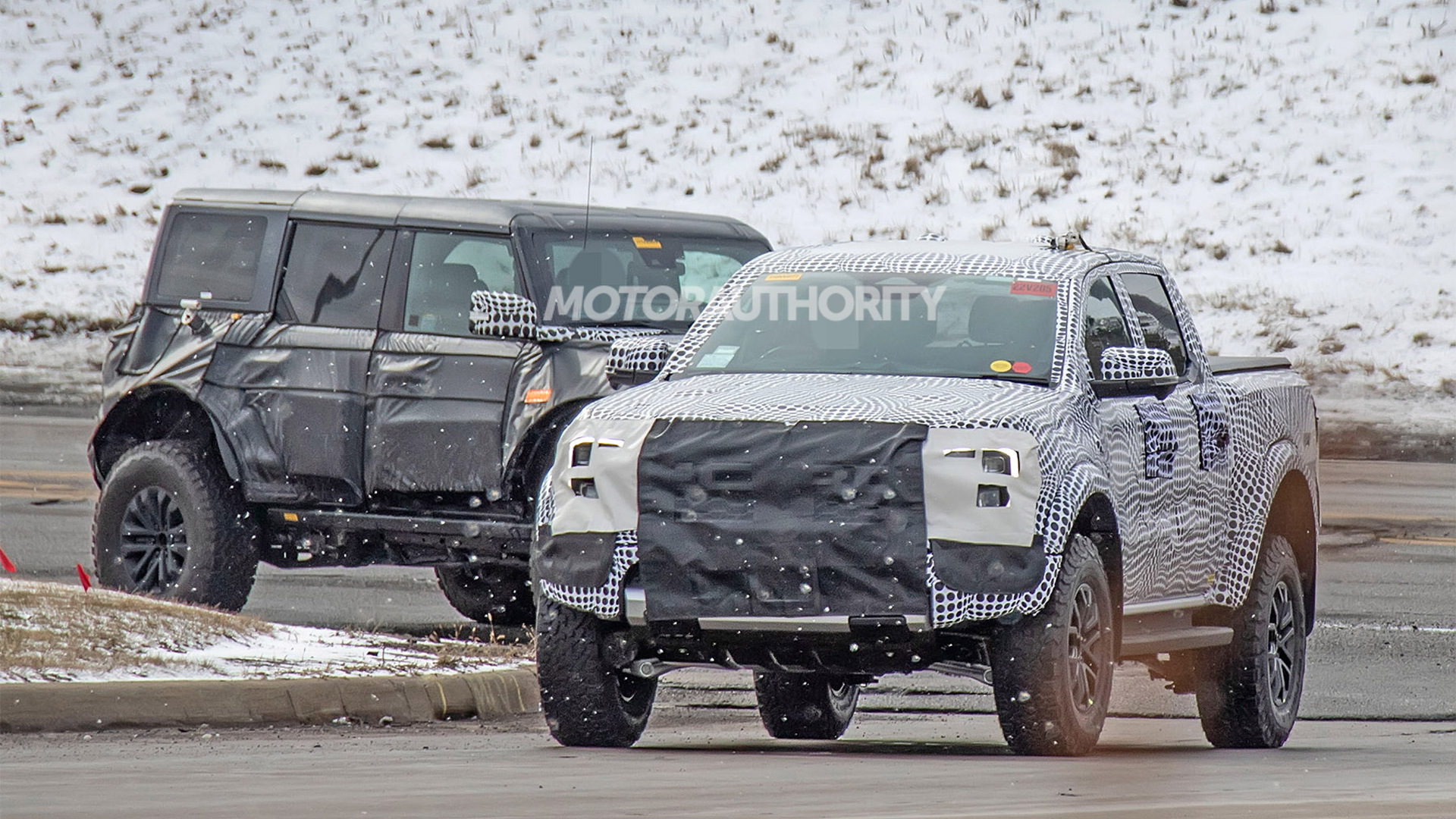 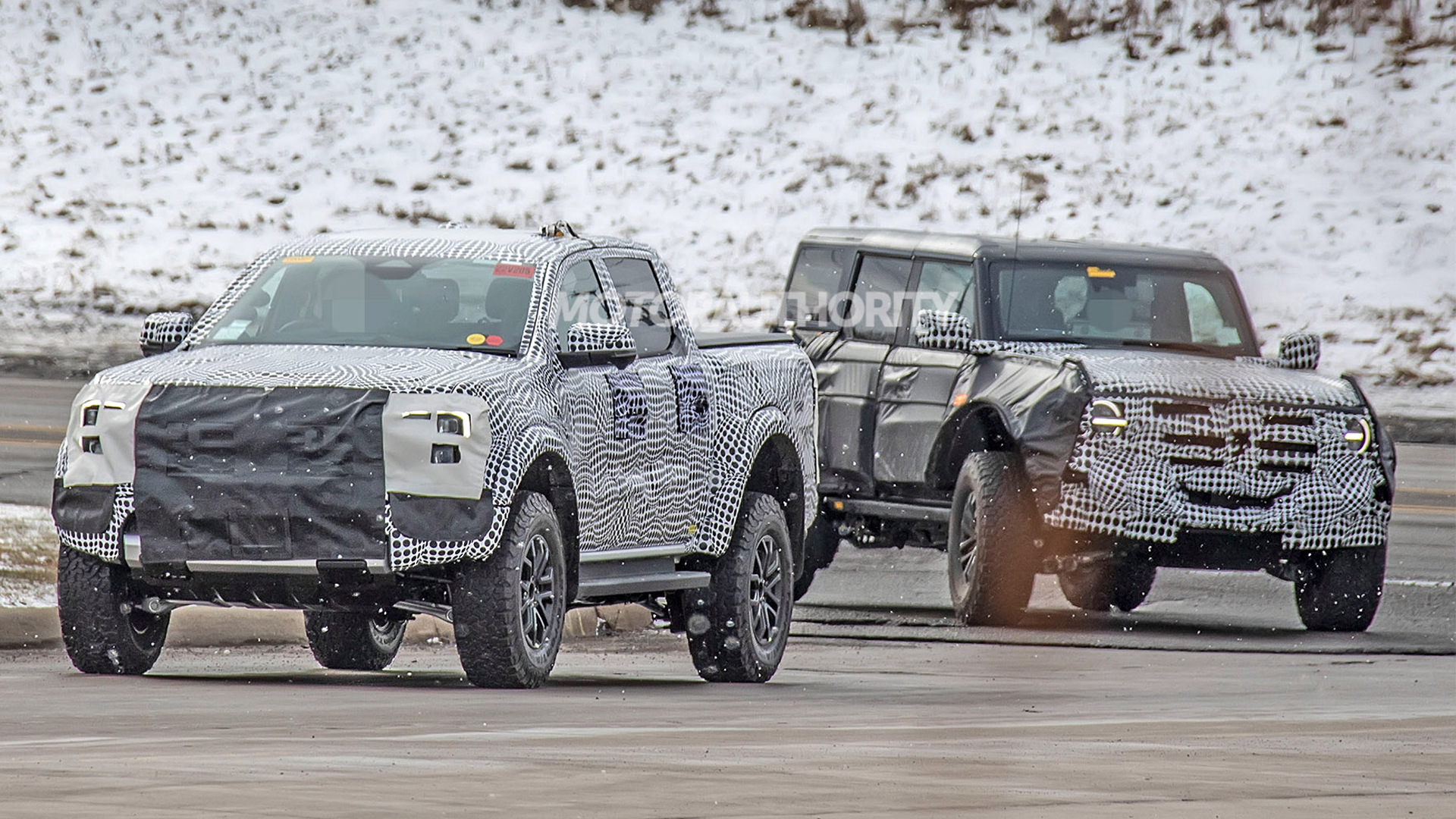 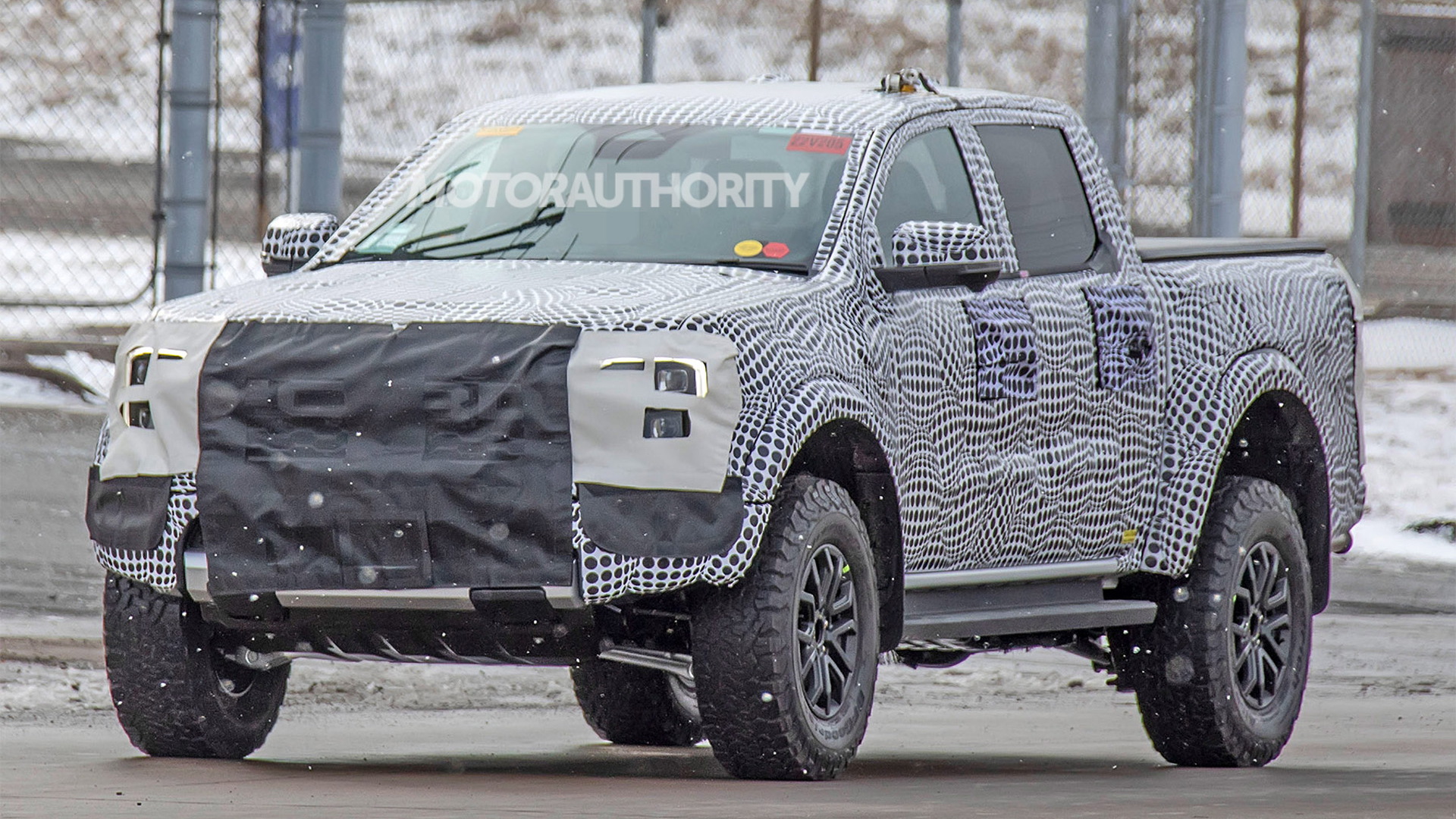 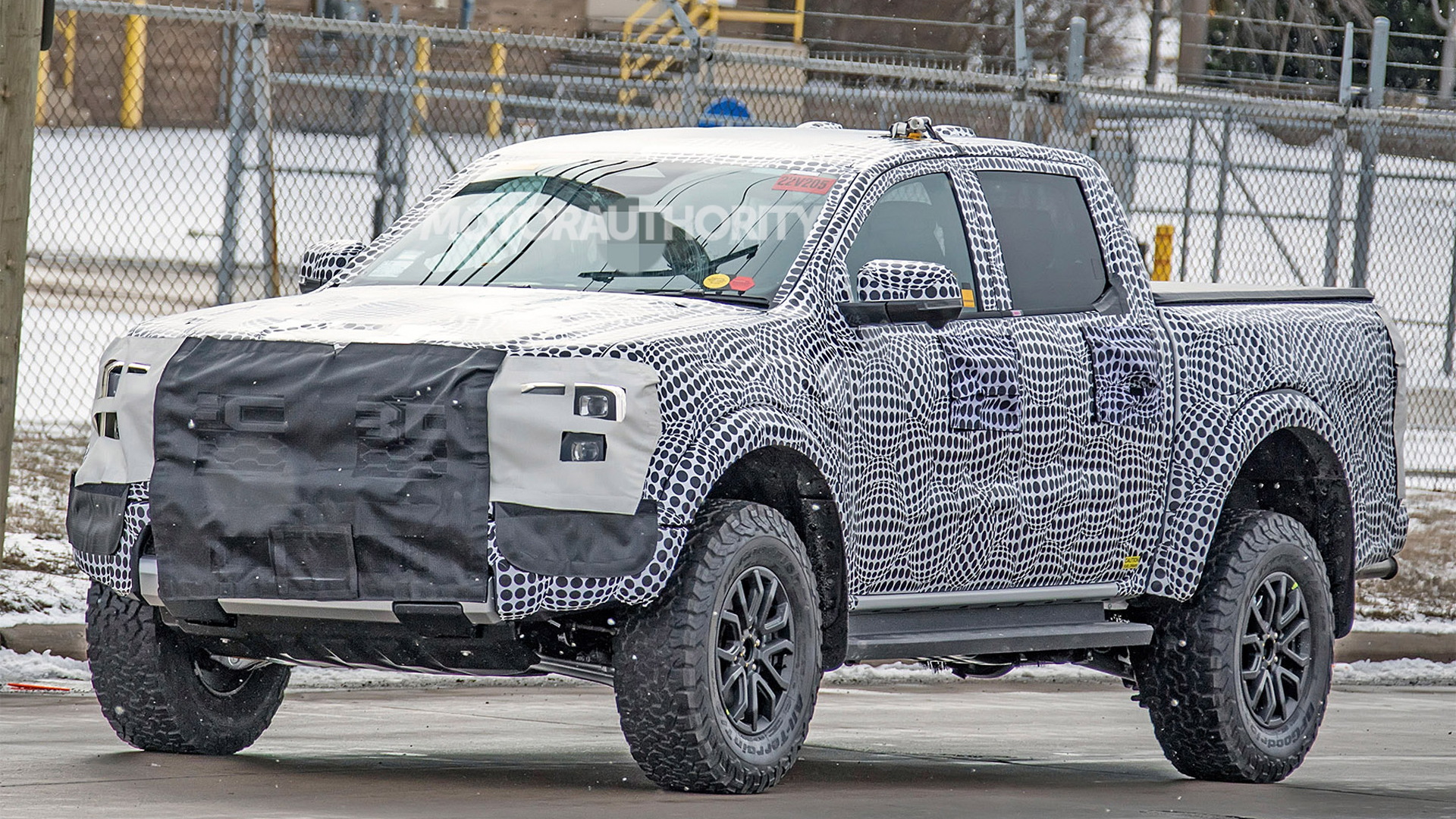 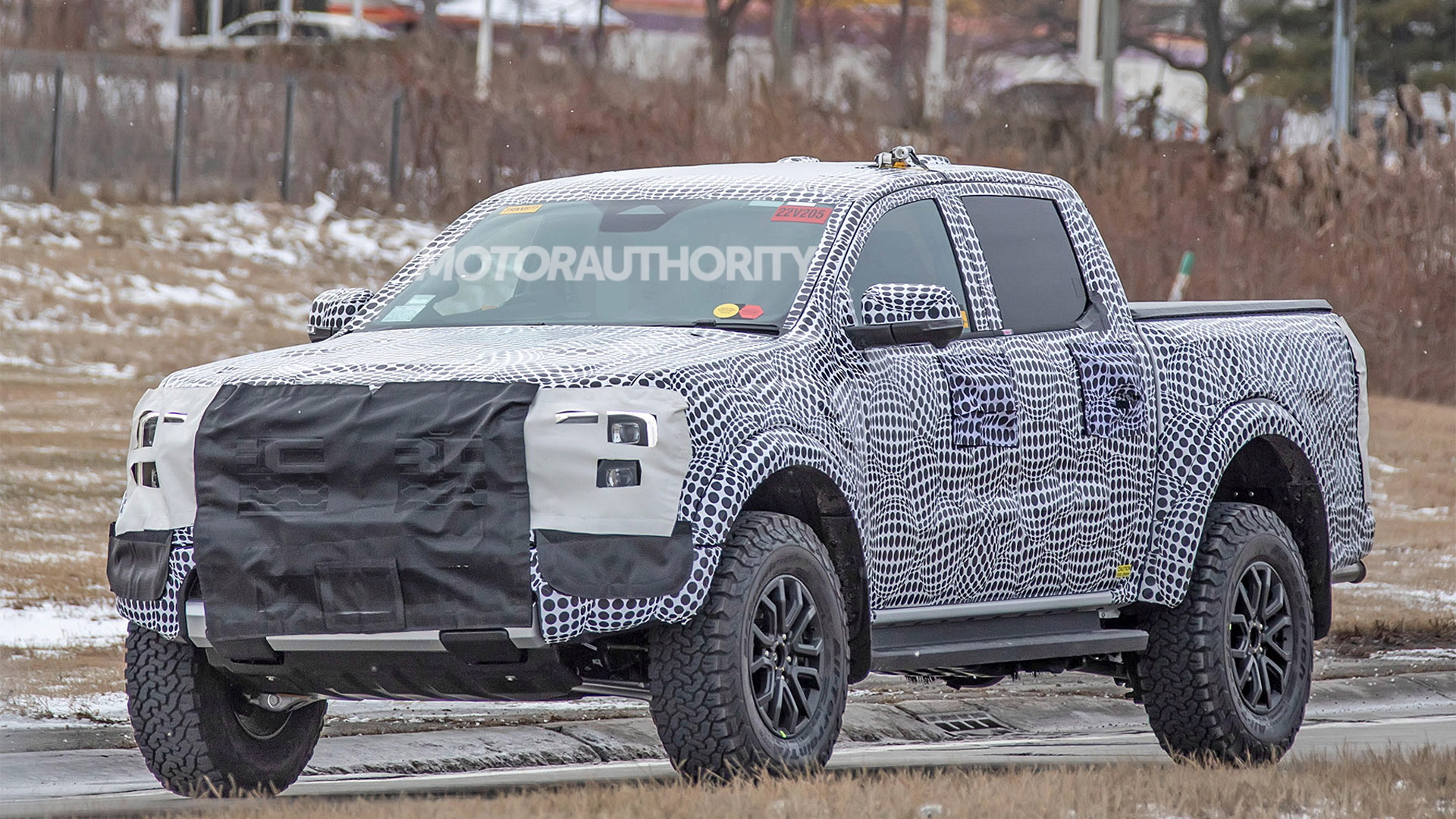 A redesigned Ford Ranger is coming for 2023, and is set to spawn a high-performance Ranger Raptor variant that we'll almost certainly see in the U.S.

A prototype for the Ranger Raptor has just been spotted, revealing a number of clues about the mid-size performance truck. It was spotted testing alongside a prototype for the Raptor version of the new Bronco, a vehicle that may end up being called the Bronco Warthog.

Looking at the tester for the Ranger Raptor, which happens to feature a right-hand-drive configuration, there's no missing the big “FORD” script on the grille and the flared wheel arches barely fitting the chunky BF Goodrich All-Terrain T/A KO2 tires.

There's also dual-exhaust tips, with a single tip at either side of the rear, a design that likely points to a V-6 being tested. And the suspension has been concealed, likely to hide some Fox shocks. Expect them to be the same electronically controlled Fox 3.0 bypass shocks from the F-150 Raptor.

Both the redesigned Ranger and Bronco use an updated version of the T6 body-on-frame platform found in the current Ranger (the updated platform has a slightly bigger footprint and can support hybrid technology), so it's likely the two vehicles' performance variants will have a lot in common.

The current Ranger Raptor was never offered in the U.S., namely because it was developed on the version of the Ranger sold overseas. It was also developed exclusively with a diesel powertrain, in this case a 2.0-liter twin-turbocharged inline-4 good for 210 hp and 369 lb-ft of torque.

For the redesigned Ranger Raptor, Car Expert has learned that that the truck is being developed with three different powertrain options. One will be the 4-cylinder diesel from the current Ranger Raptor, and the other two will be a pair of V-6 units, specifically a diesel-powered 3.0-liter turbocharged V-6 and a gasoline-powered 2.7-liter turbocharged V-6. The diesel is said to be the same 3.0-liter offered in the F-150, where it delivers 250 hp and 440 lb-ft, so it might still be offered in the U.S.-spec Ranger.

As for the 2.7-liter turbocharged V-6, Car Expert predicts the engine will deliver 325 hp and 400 lb-ft. This should ensure the Ranger Raptor has plenty of punch while not stepping on the toes of its F-150 Raptor big brother, which incidentally will be revealed in redesigned form on Wednesday.

Beyond the new powertrains, the redesigned Ranger Raptor is expected to come with a 10-speed automatic and standard all-wheel drive with the V-6 engines (and available on the 4-cylinder).

Look for the debut to happen later this year. The Bronco Warthog (or whatever it ends up being labeled) should debut about the same time.