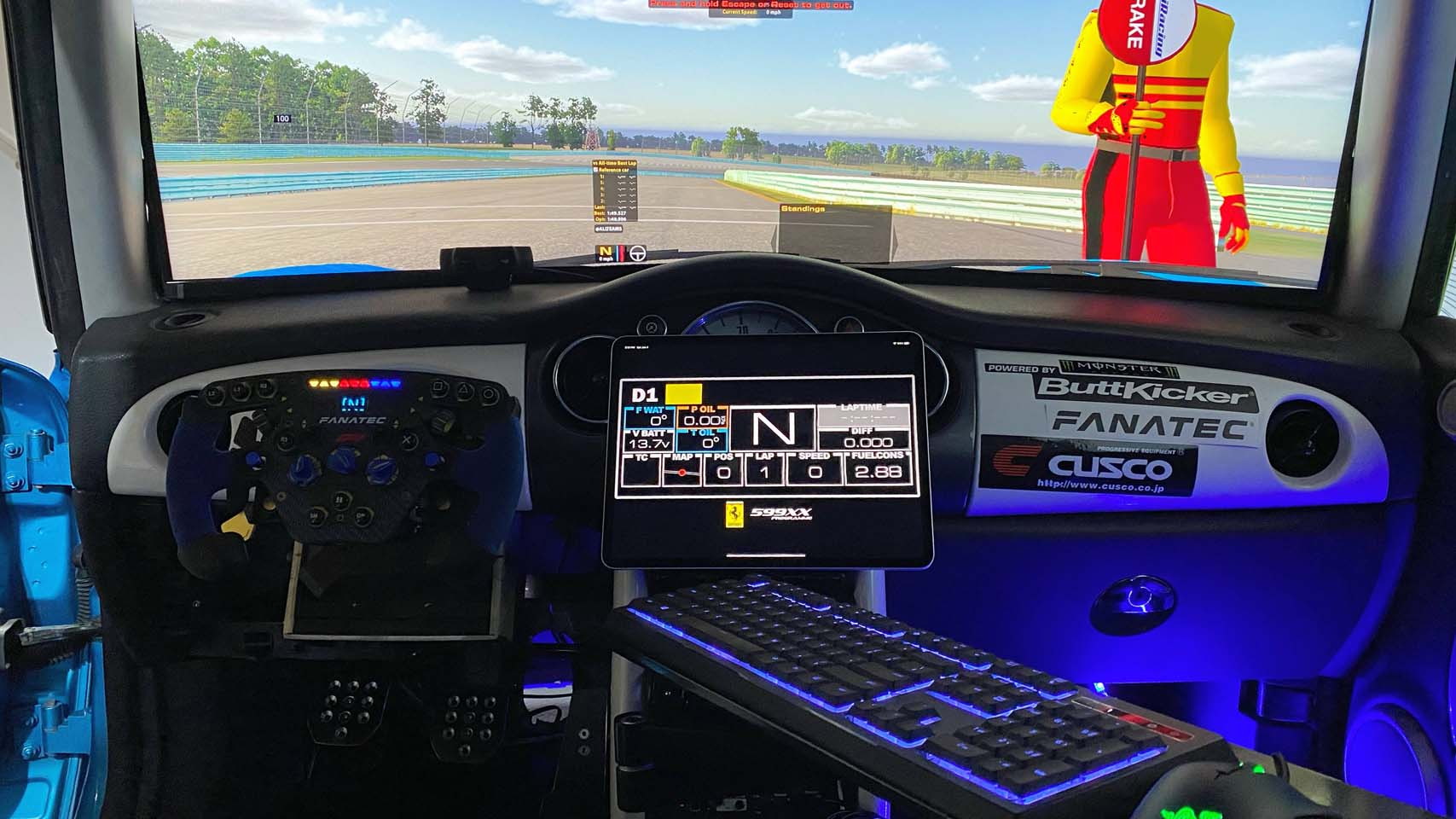 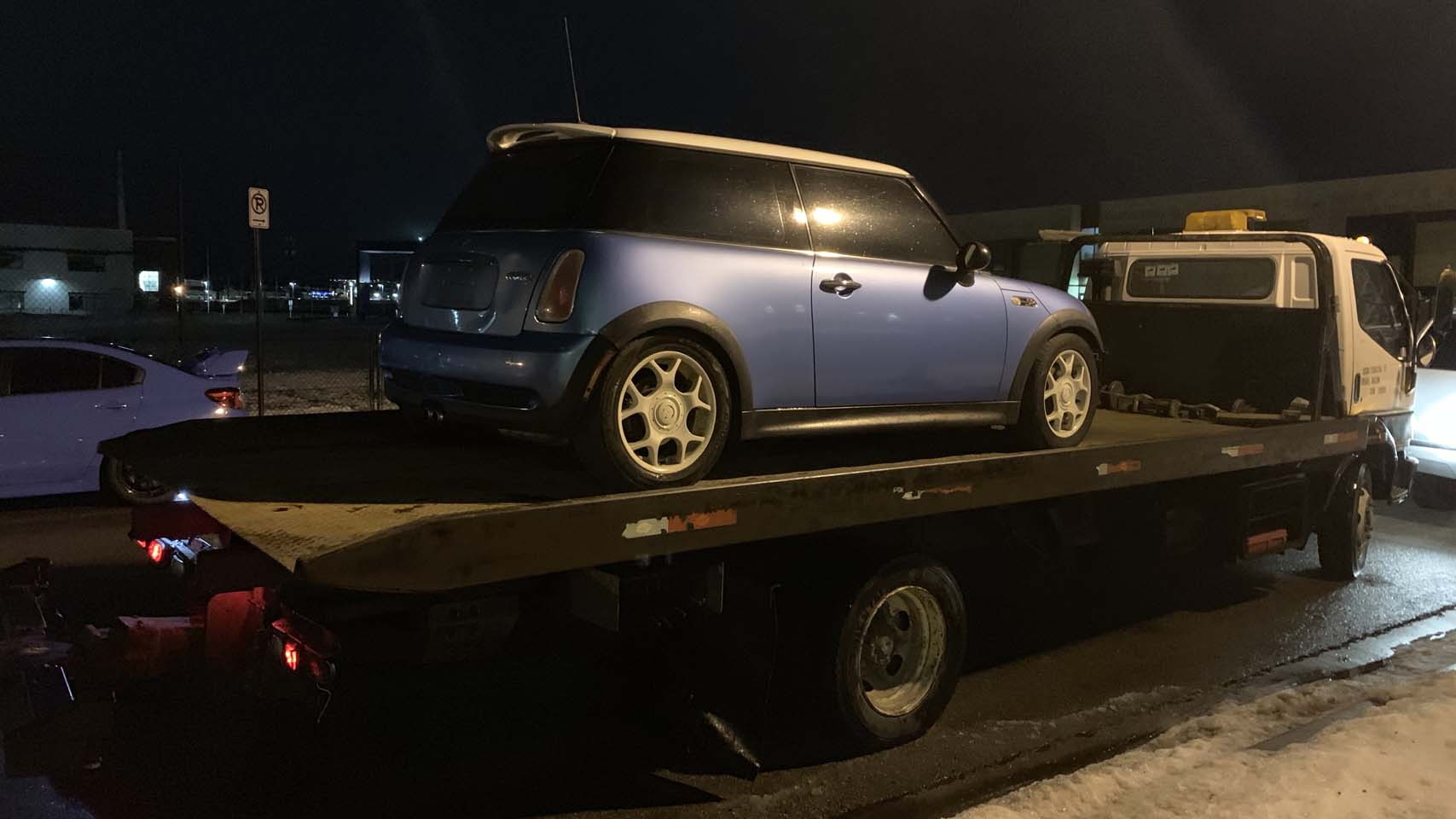 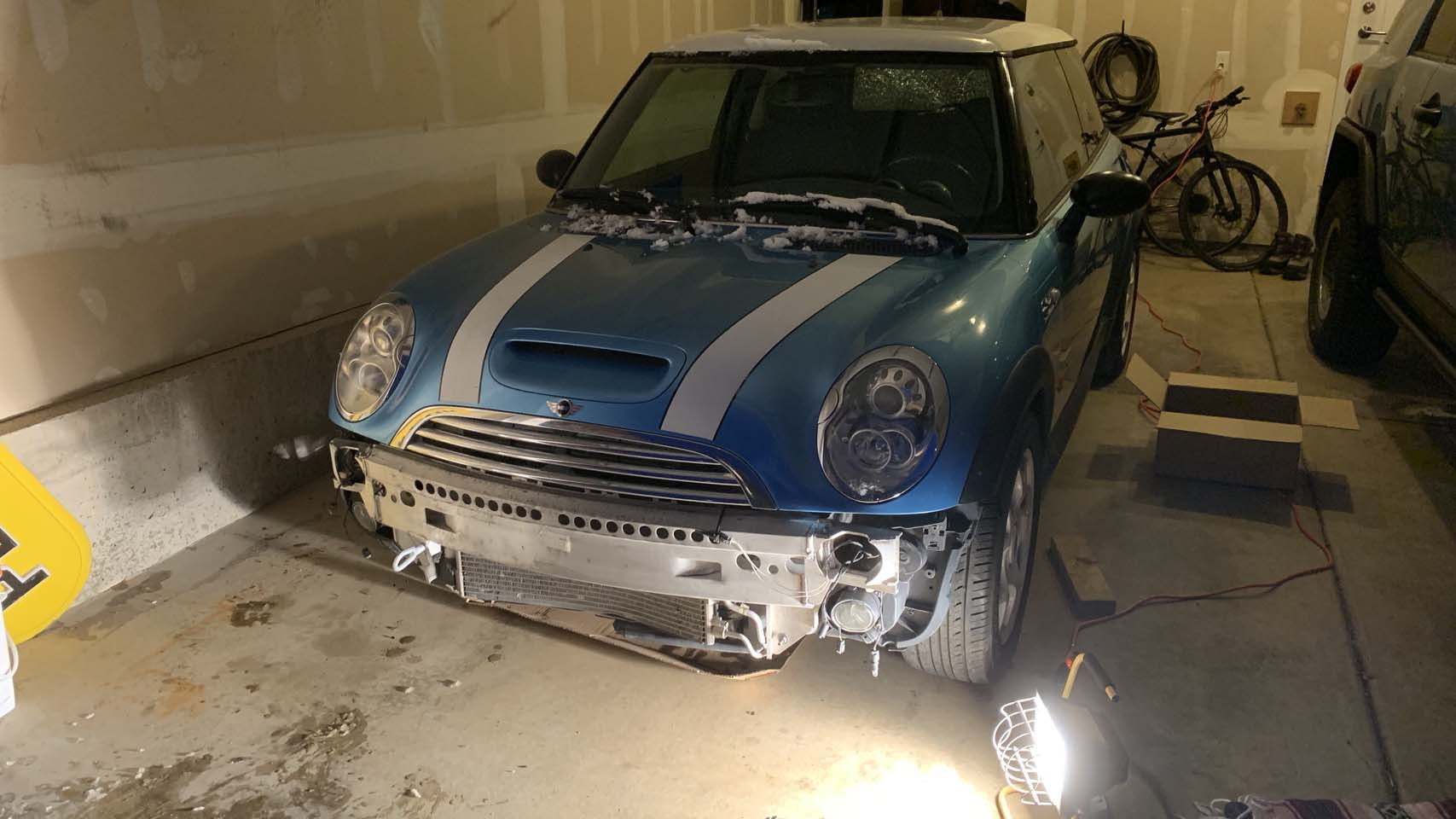 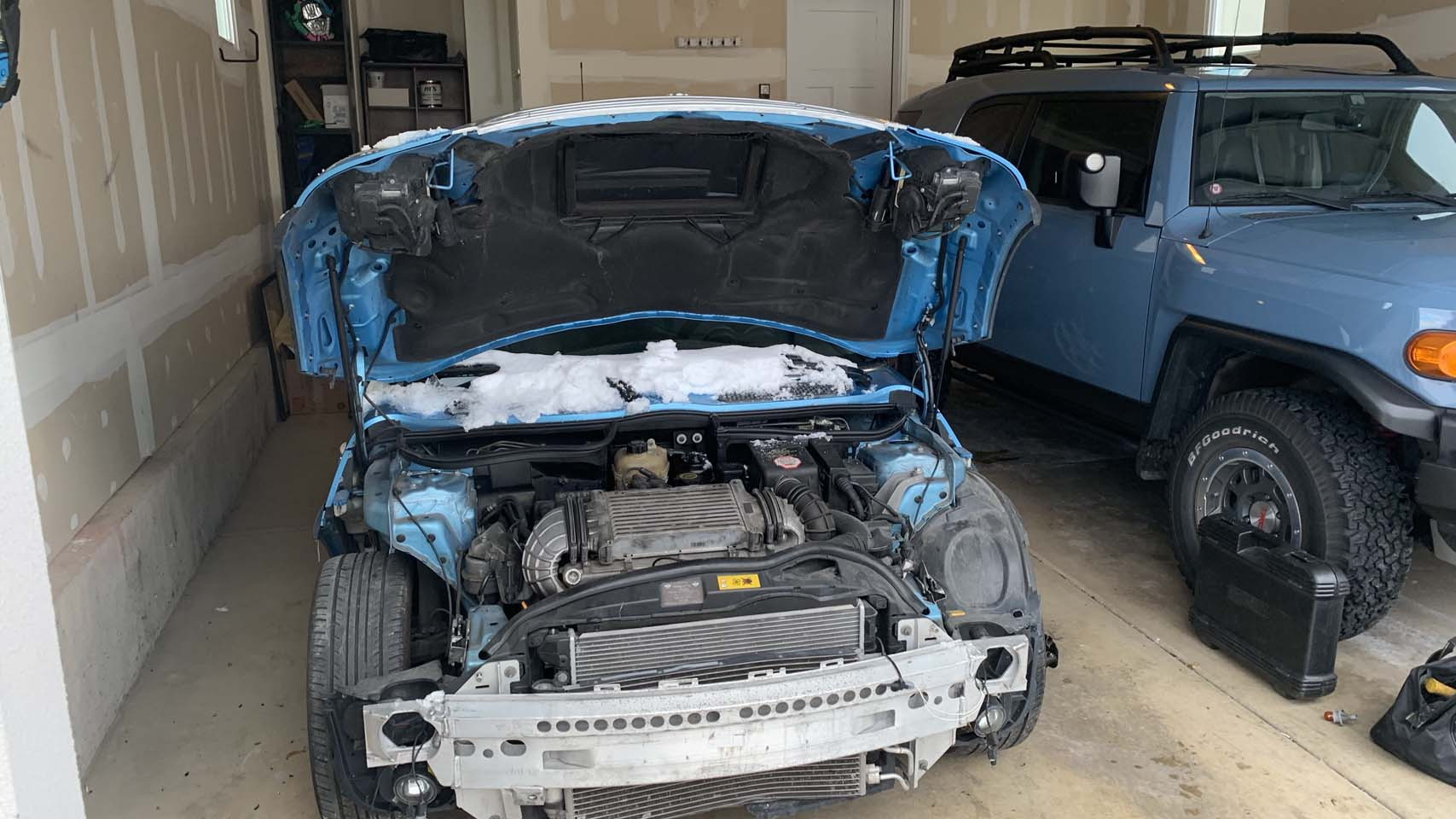 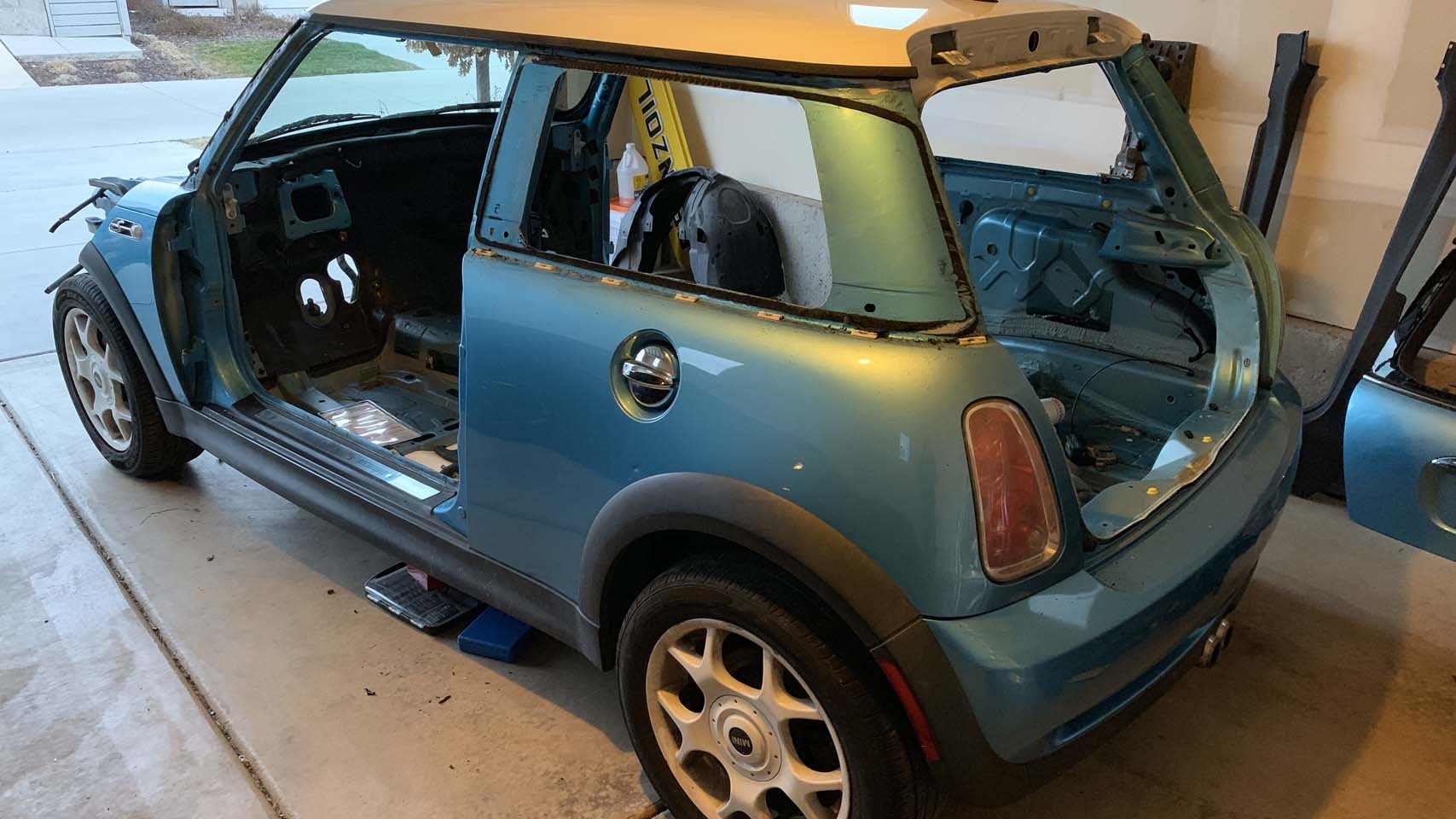 To Brent Cheney, Little Tikes race car beds were always cool. In fact, as an adult he wanted one made out of a Ferrari F40.

That was too tall of an order, so Cheney looked for something else to satisfy his car obsession. An ’80s kid, he had fond memories of the Cruis’n USA arcade game. It had a seat, steering wheel, gear selector, and pedals, all of which immersed him in the game. With that in mind, he changed from the idea of a race car bed to a race car simulator and decided to build one for the man cave in his new home in Salt Lake City.

His friends said it couldn’t be done. He said, literally, “hold my beer.” 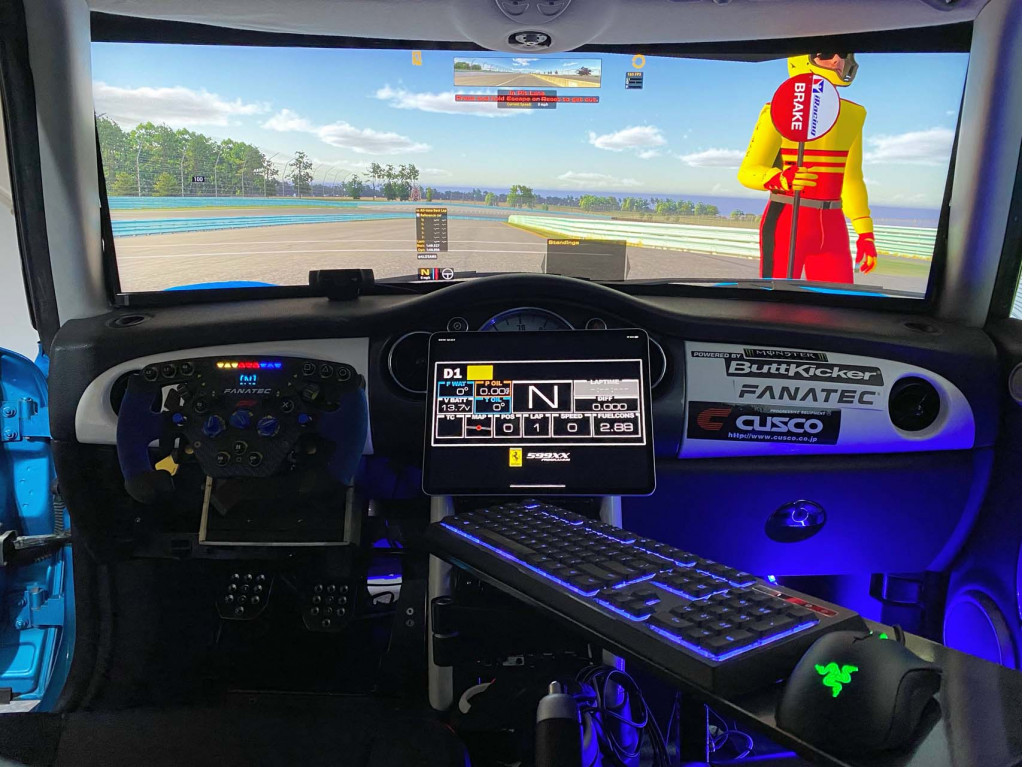 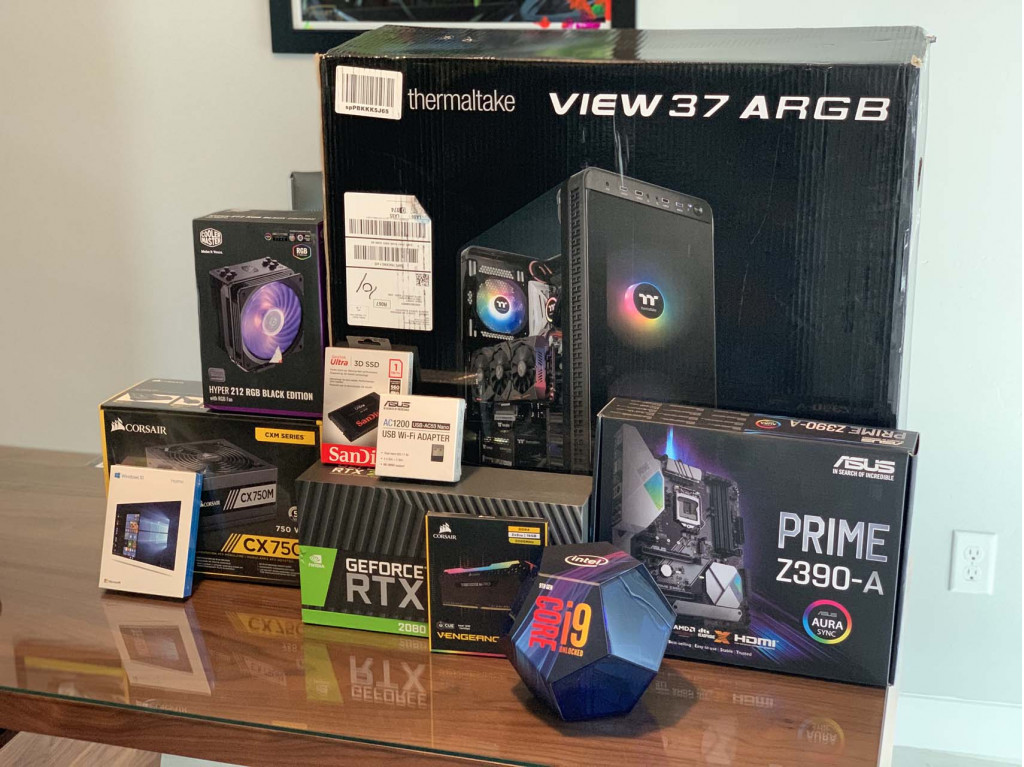 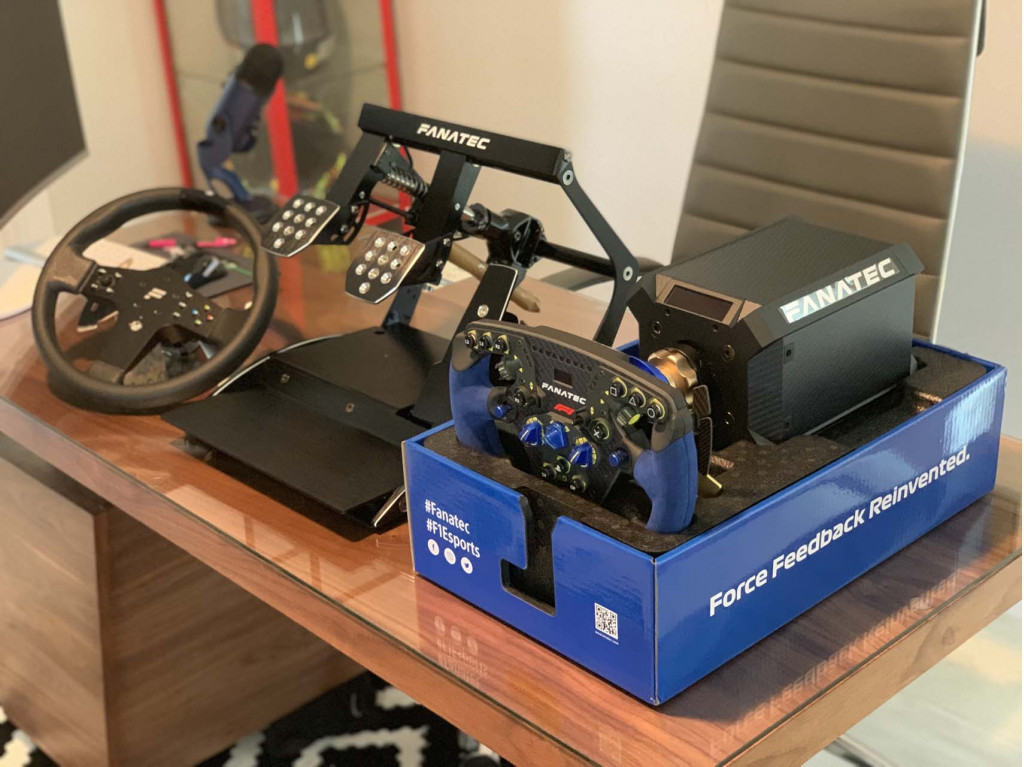 Cheney, a fine artist painter and marketing consultant, is no stranger to project cars. He owned a race shop and tuning company, Turtle Factory, that modified Nissans, Minis, and Toyotas mostly for used in Time Attack racing. He obviously had the skills to build a simulator.

The project started with the software, not the car. Cheney chose iRacing as the simulator as it’s “arguably the best PC racing game,” he said. It allows the seating position to be moved relative to the screen and provides a left-side viewpoint like a real car.

Cheney decided he’d overbuild the PC to run the software. He doubled all the iRacing system requirements. The hardware he chose is all top shelf. 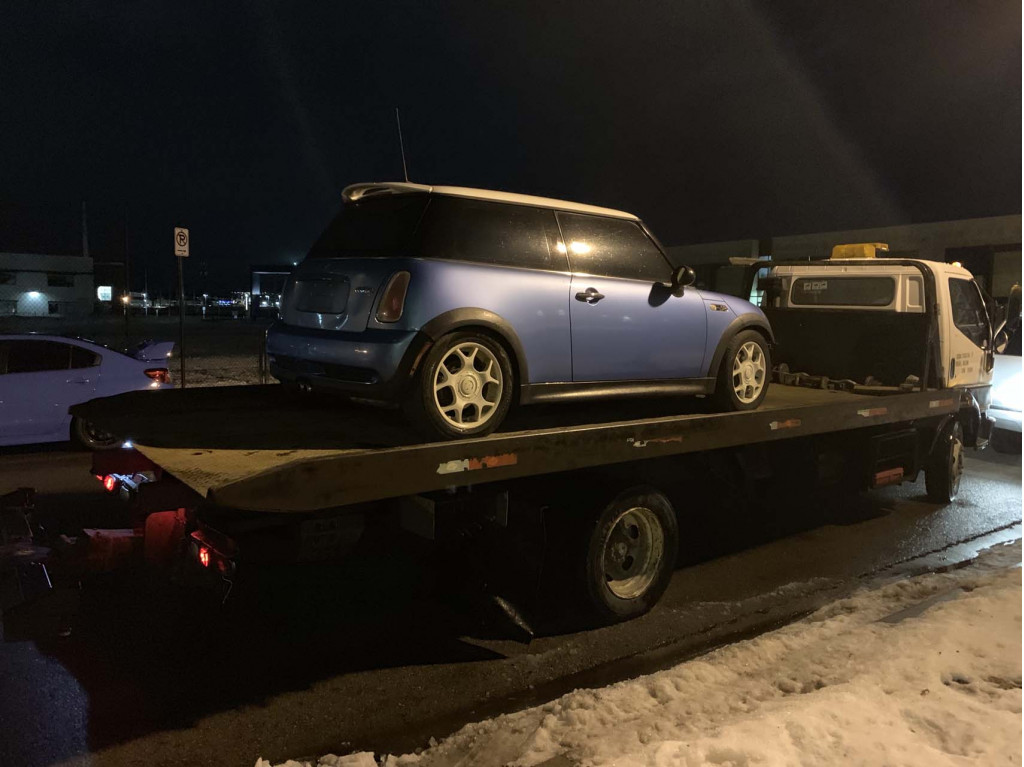 Hardware has to fit

With the system built, Cheney needed a car to drop it into. He had a few criteria for what car to use. First, he wanted to make as few modifications as possible. The car had to be a sports car that could be modified by an enthusiast. “I’m not going to buy a 1999 Toyota Corolla four-door,” Cheney quipped.

The car also had to have a cool factor, but it couldn’t be too cool. “Even if I got a 911 Turbo for free, there’s no way I’m going to cut it up and put it under my house,” Cheney said.

Cheney had a budget of $2,500 for the car, and he originally wanted a convertible. He found a damaged 1997 BMW M3 droptop in the local classifieds, but it was sold out from under him. In hindsight, Cheney said he’s glad that didn’t work out because of the light pollution a convertible would allow. A coupe would be a better choice because it would provide a darkened environment.

His next choice was a 1990s Mitsubishi Eclipse wrapped like Brian O’Conner’s in “The Fast and the Furious.” However, he knew he’d have to cut it up to fit it in his basement, and it would have been difficult to weld back together without unsightly seams.

Cheney realized R53 Mini Coopers have rear side windows that wrap around the rear pillars, plenty of plastic, and a two-tone look that makes it easy to hide the seams. He knew those traits made it the right choice. 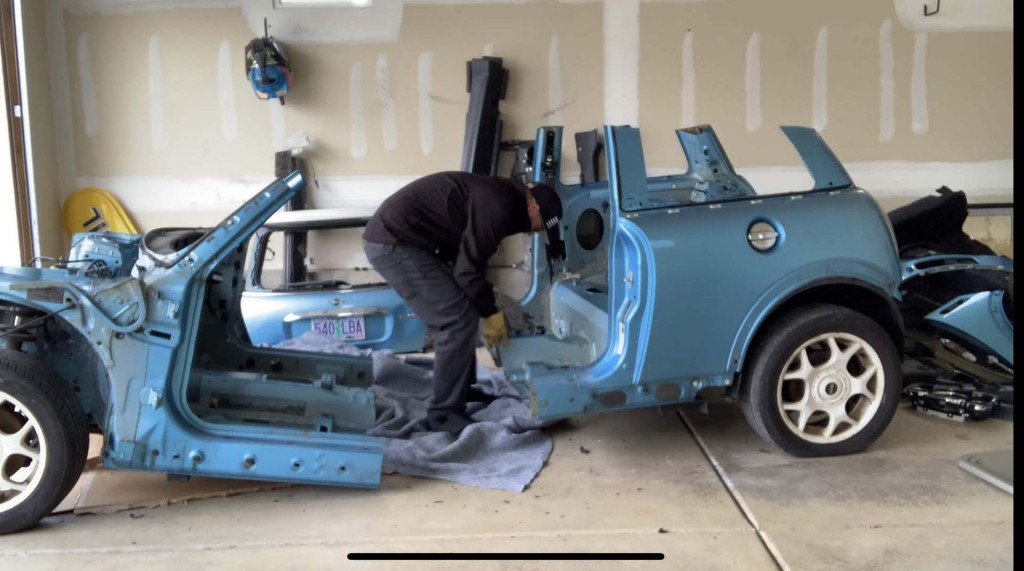 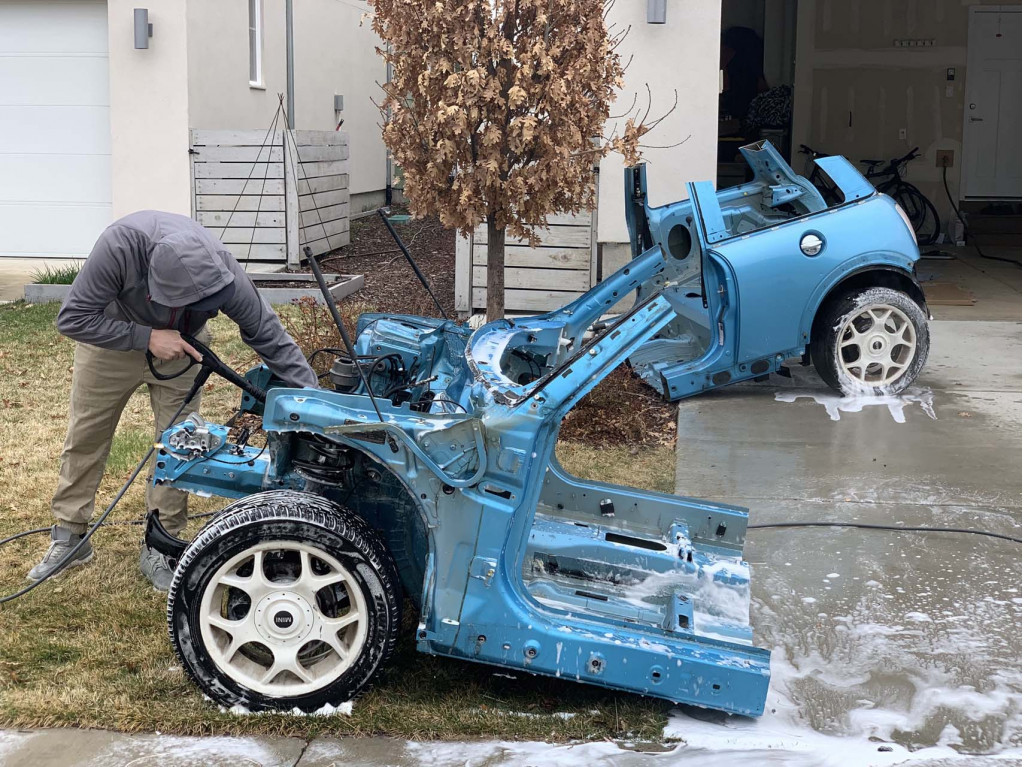 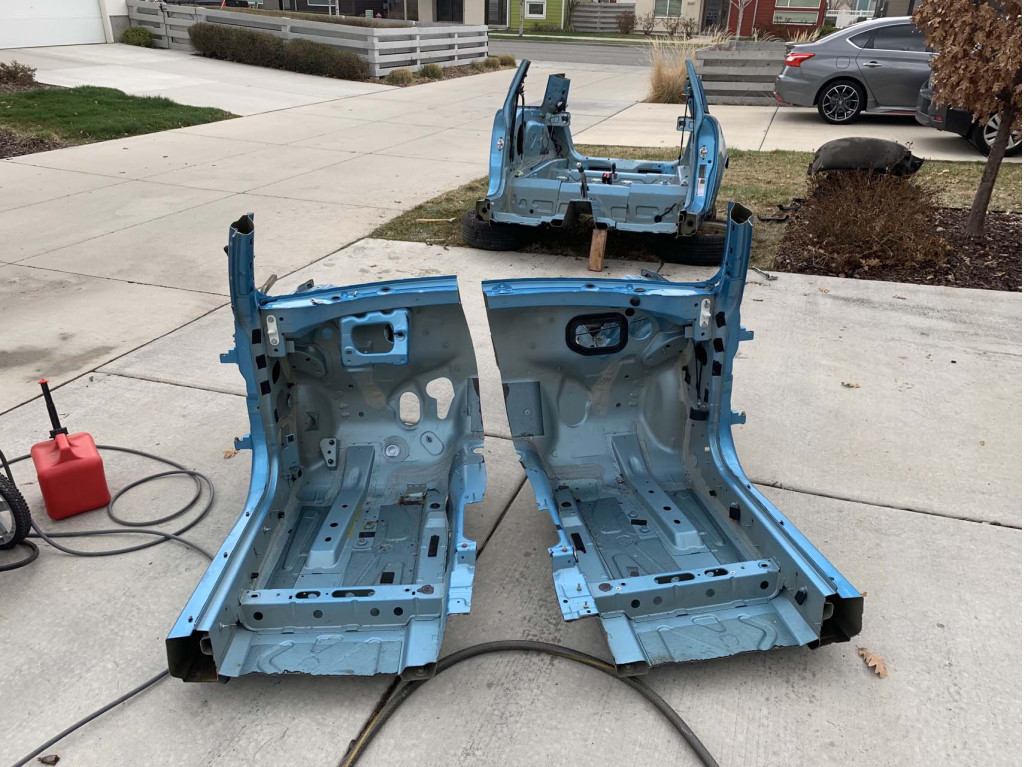 Chop a car to bits

Cheney listed the Mini’s powertrain in the classifieds as a you-pull-it proposition. A man offered to take the entire drivetrain and suspension for $1,000.

While the buyer pulled the guts that make it go, Cheney dismantled the interior trim, doors, hatch, headliner, glass, and every wire and fastener until the Mini was stripped down to just the metal. They both worked in the garage.

Cheney then cut the body into 8 pieces with a DeWalt 60V Max FlexVolt cordless reciprocating saw with a Diablo Steel Demon 6-inch blade.

“I actually cut the whole car up only using two blades,” Cheney said.

To ensure the house didn’t stink like a car (Editor’s note: Would that really be such a bad thing?), Cheney pressure-washed the pieces more than once. 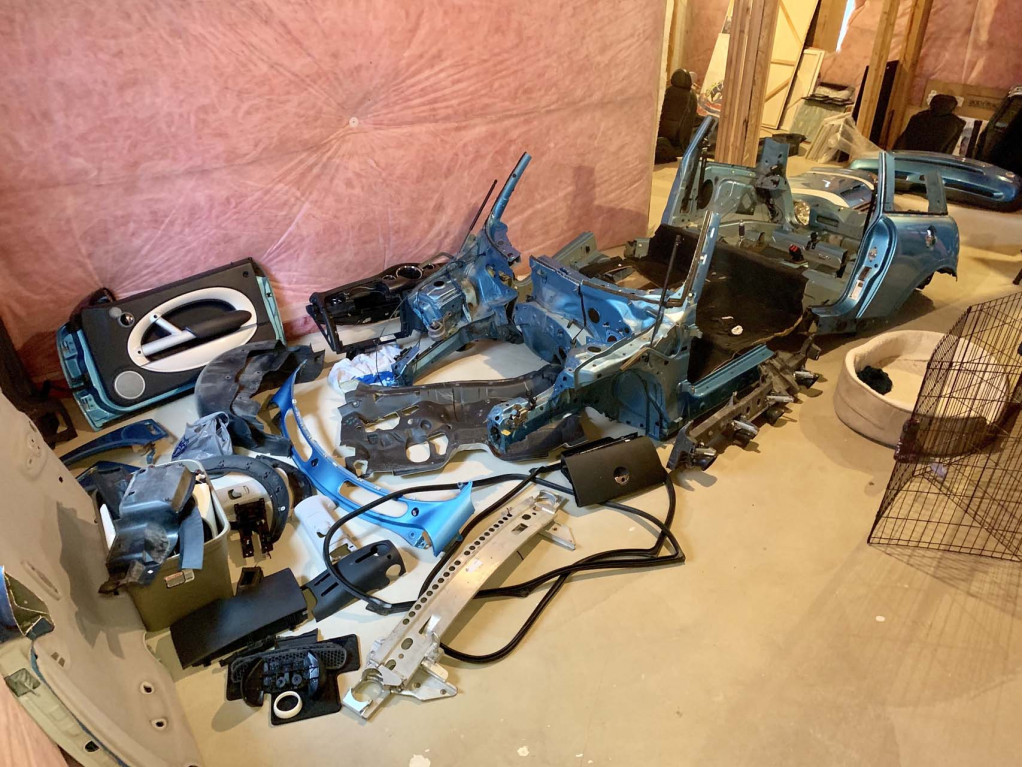 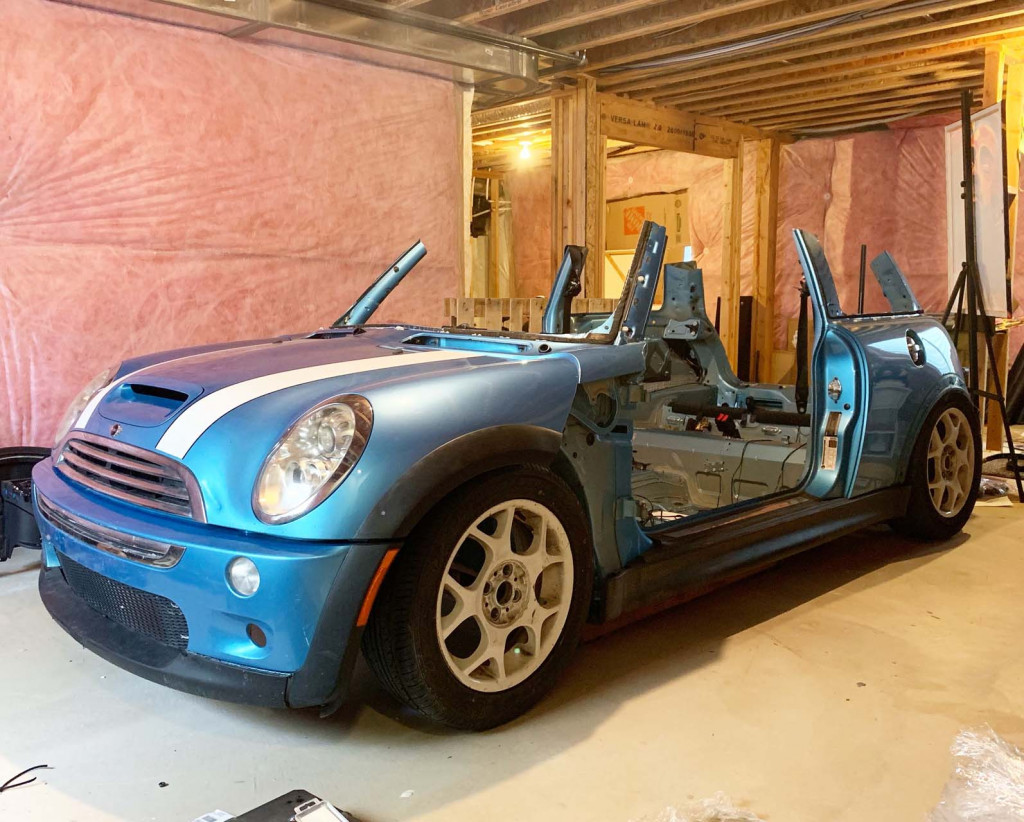 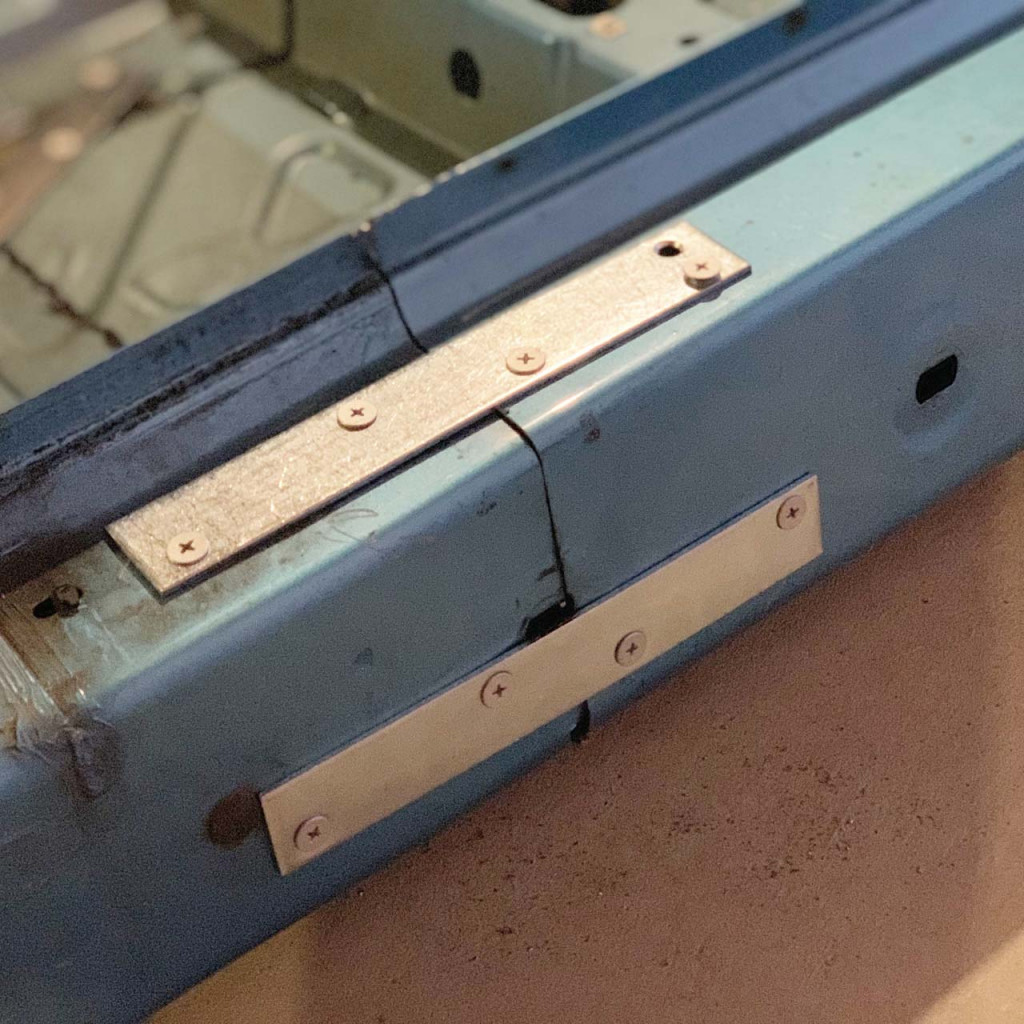 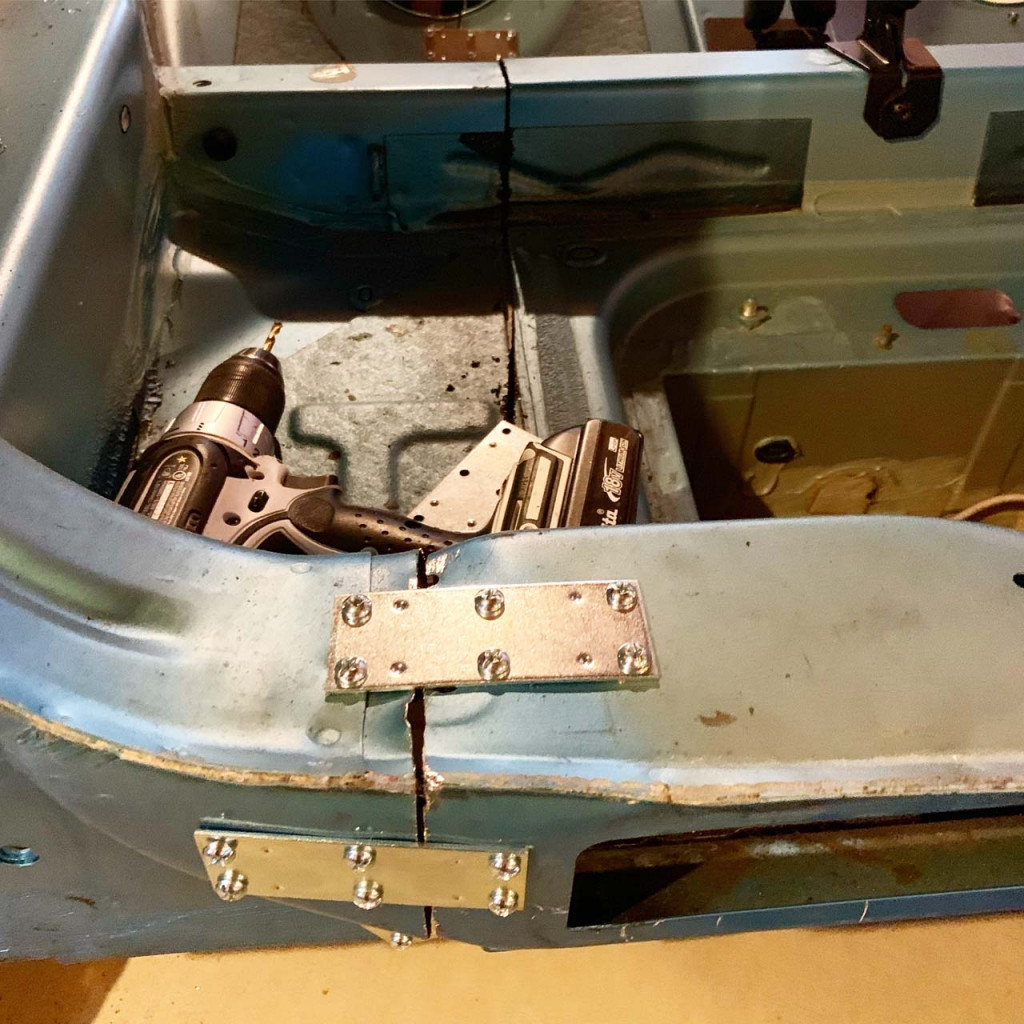 Cheney carried all the pieces into the basement, then started reassembly atop a custom wooden platform.

He used more than 200 metal brackets to bolt the car back together. Starting with the back three sections, Cheney worked his way around to the four front sections, then added the roof.

“When I got to the roof, I realized how out of line everything was,” Cheney noted. He attached one side, then noticed the other side was off by about an inch. The entire roof had to be massaged and ¼ to ½-inch variances were covered by trim.

“There’s no engineer in me. I’m an artist, not an engineer,” Cheney quipped.

With no suspension for the wheels to mount to, Cheney simply placed the wheels in the wheel wells.

Before installing the carpet, seats, and trim, Cheney wired a Harman Kardon home theater 5.1 surround sound system behind the kick panels where the factory speakers would go. Then he added a Fanatec Podium DD1 F1 Edition steering wheel and column, both of which are adjustable. The original driver’s seat worked with the system. 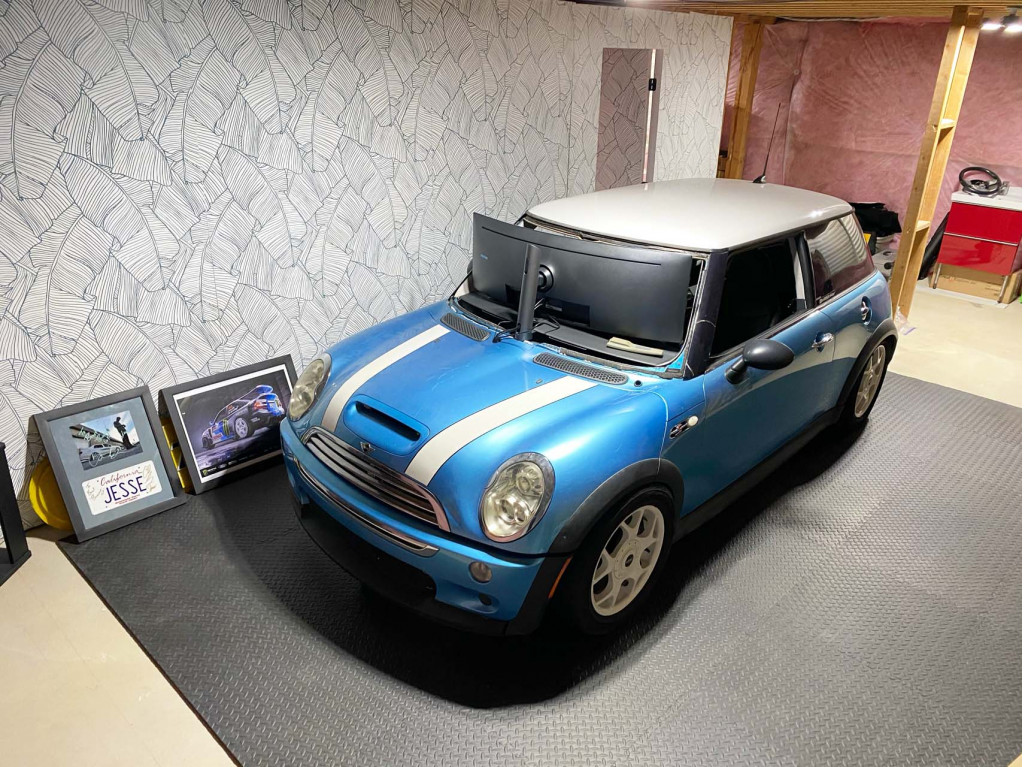 By sheer luck, the curved Samsung CHG90 monitor Cheney had chosen lined up directly with the window edges from A-pillar to A-pillar. “It’s like they made the monitor for that car,” Cheney said. “This car was a total miracle that all this stuff fit the way it did.”

With the car back together, Cheney installed the guts of the simulator in the engine bay and laid a few rolls of iPhone-controlled LED lights underneath for full effect.

Cheney also added a keyboard to the cabin to control the computer. He turns the system on and off by opening the hood and turning on the PC, but has plans to wire up a pushbutton start inside the Mini’s cabin. 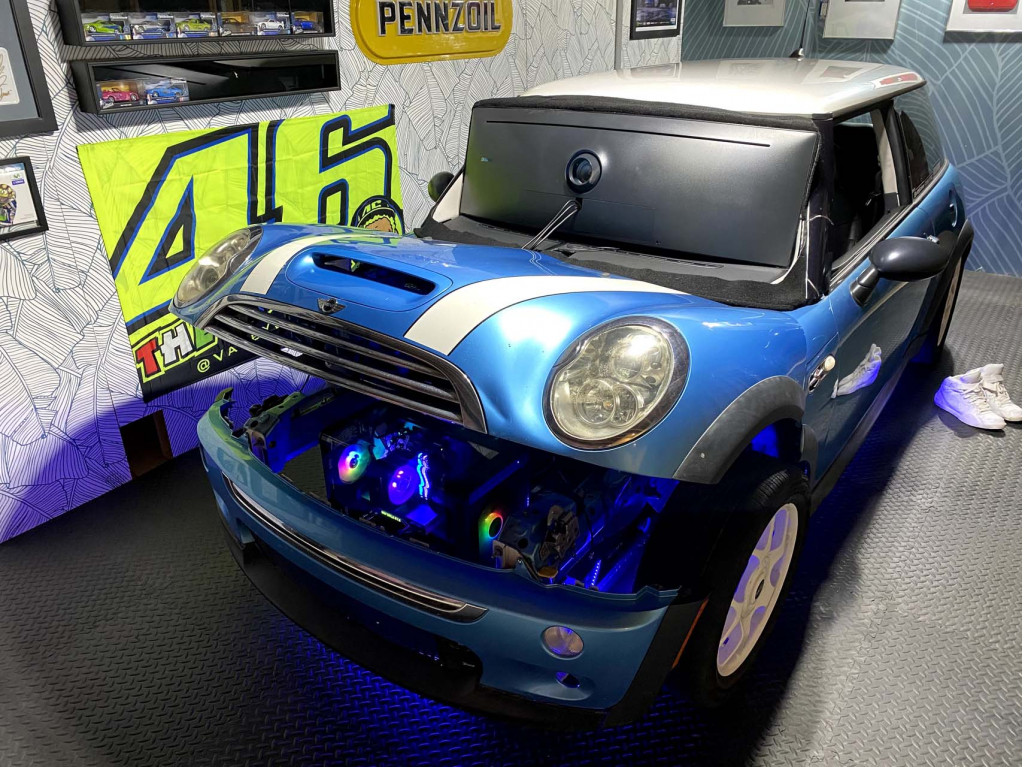 The entire project set Cheney back about $6,500 and six weeks of his life. That’s a lot less expensive than a Ferrari F40 bed would be, and the resulting simulator provides hours of fun..

Cheney turned his childhood dream into something unique, attainable, and impressive. In the process, he’s gone beyond the engaging experience Cruis’n USA provided so many years ago.