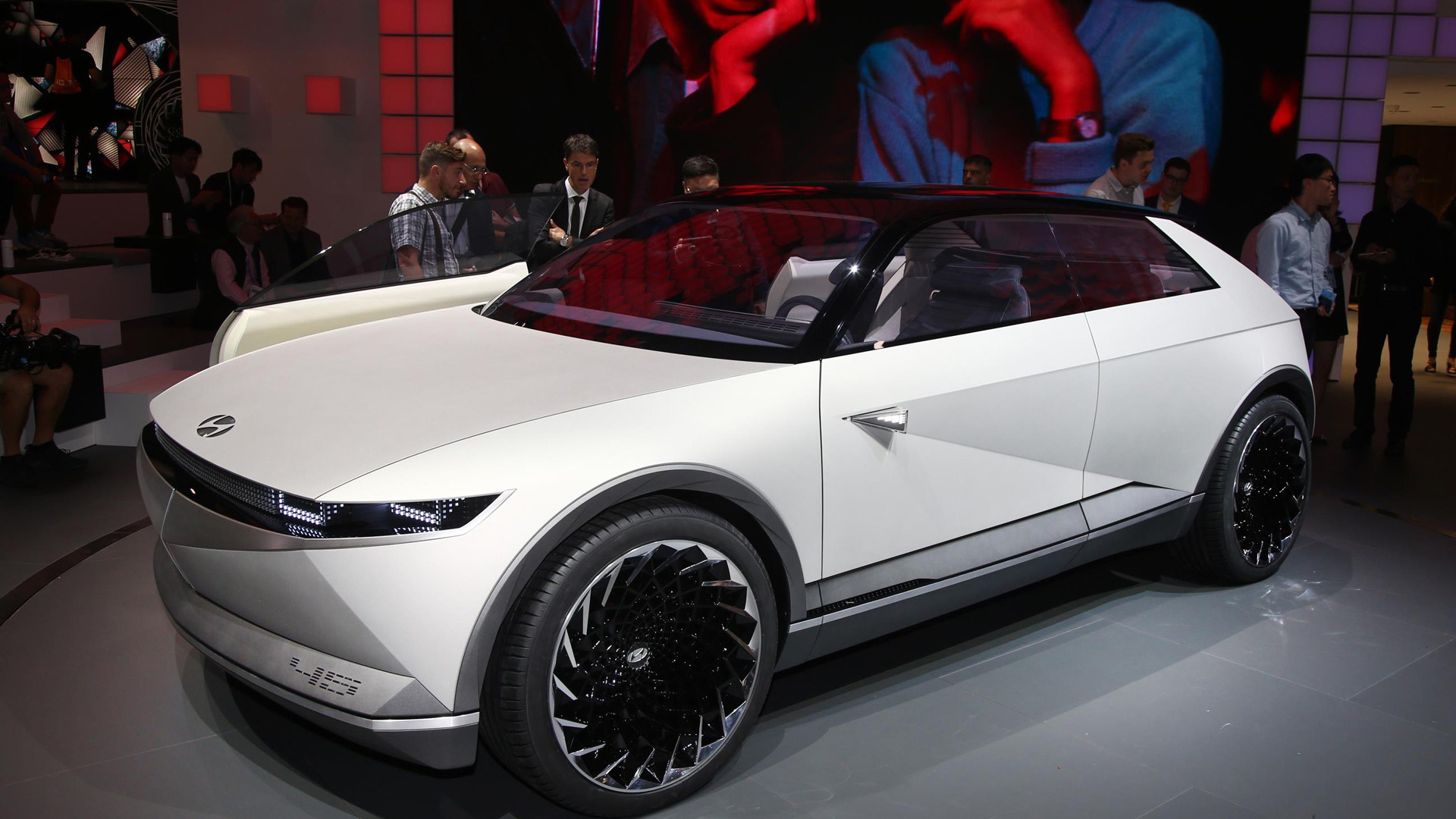 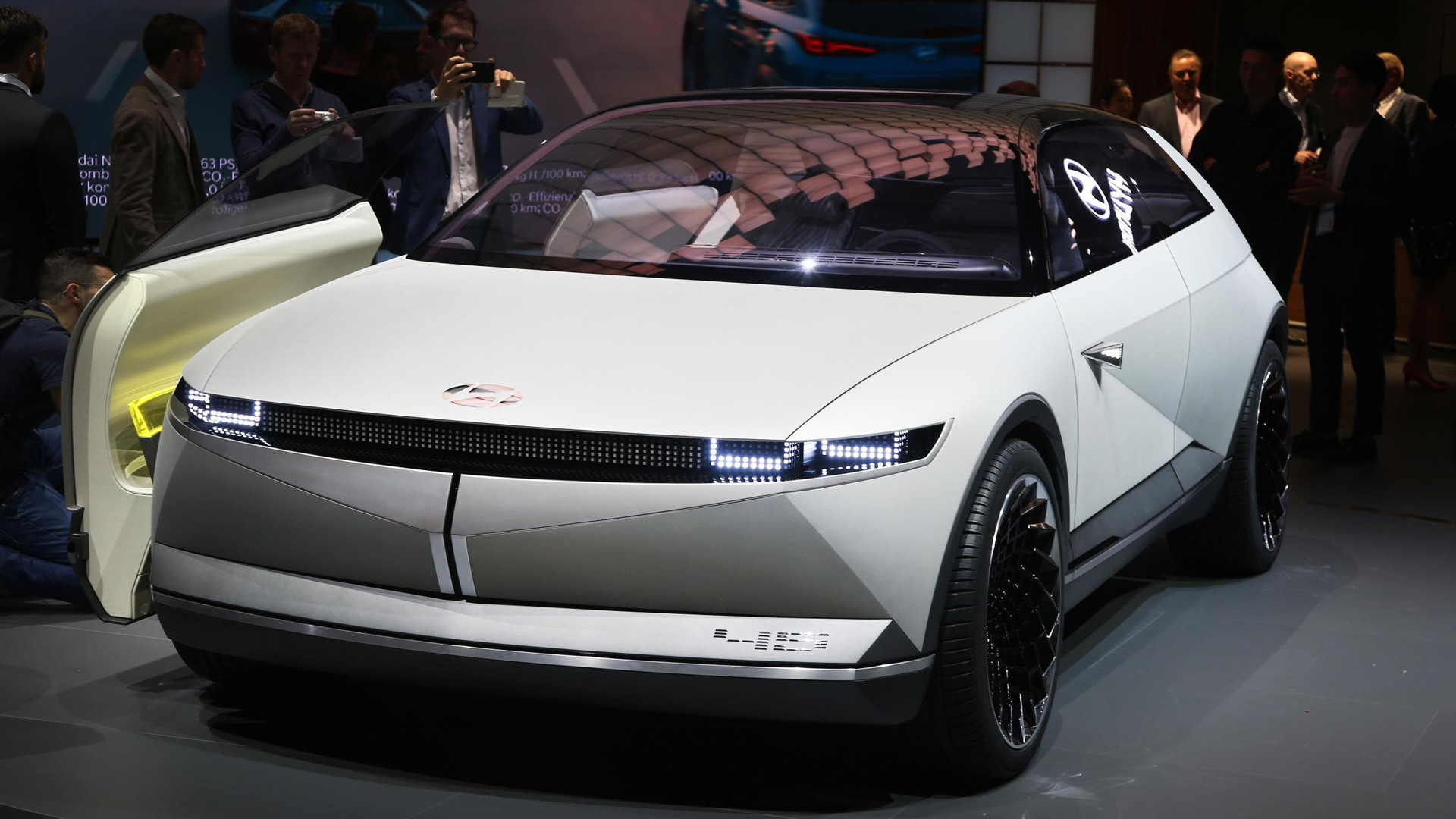 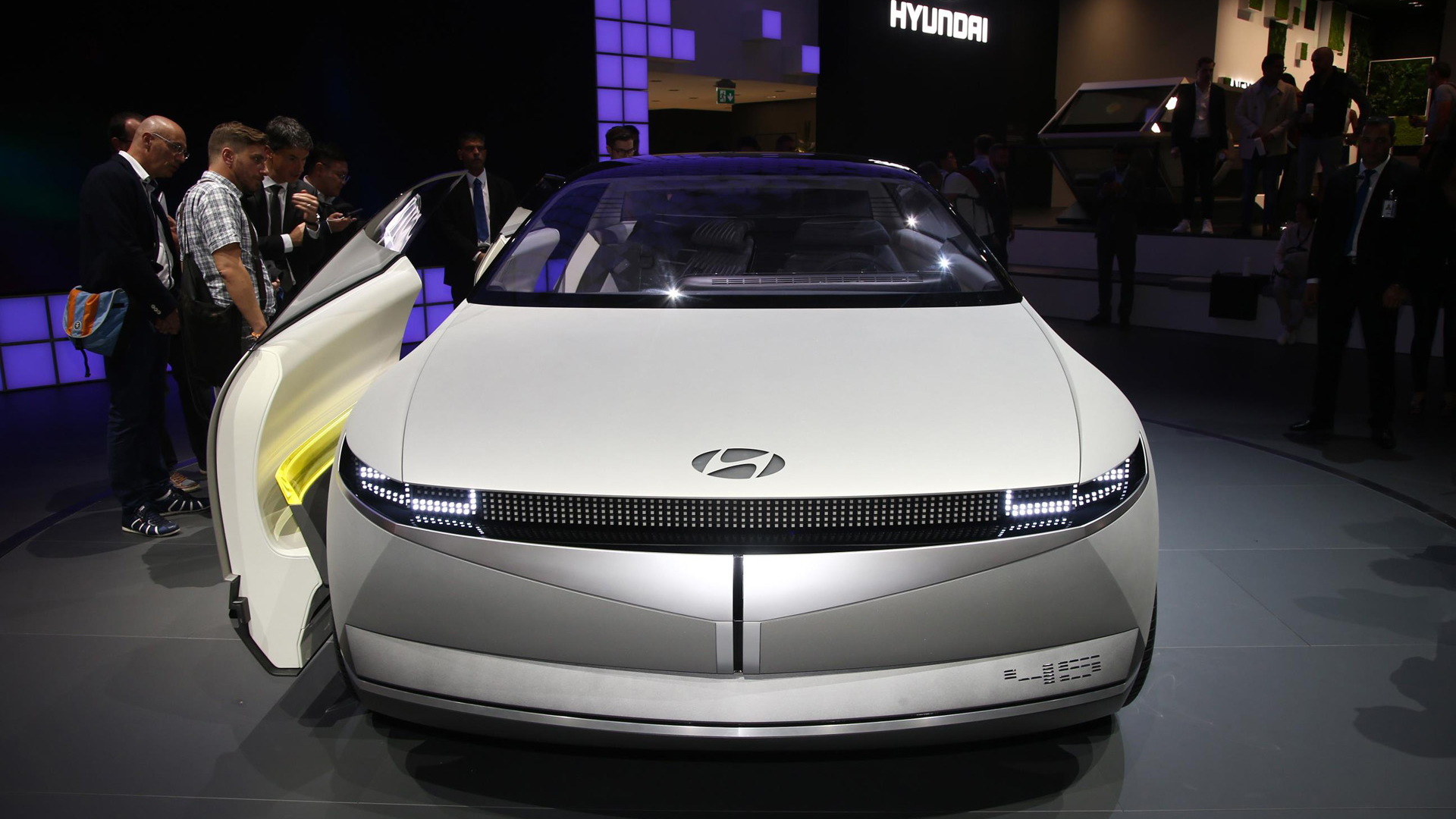 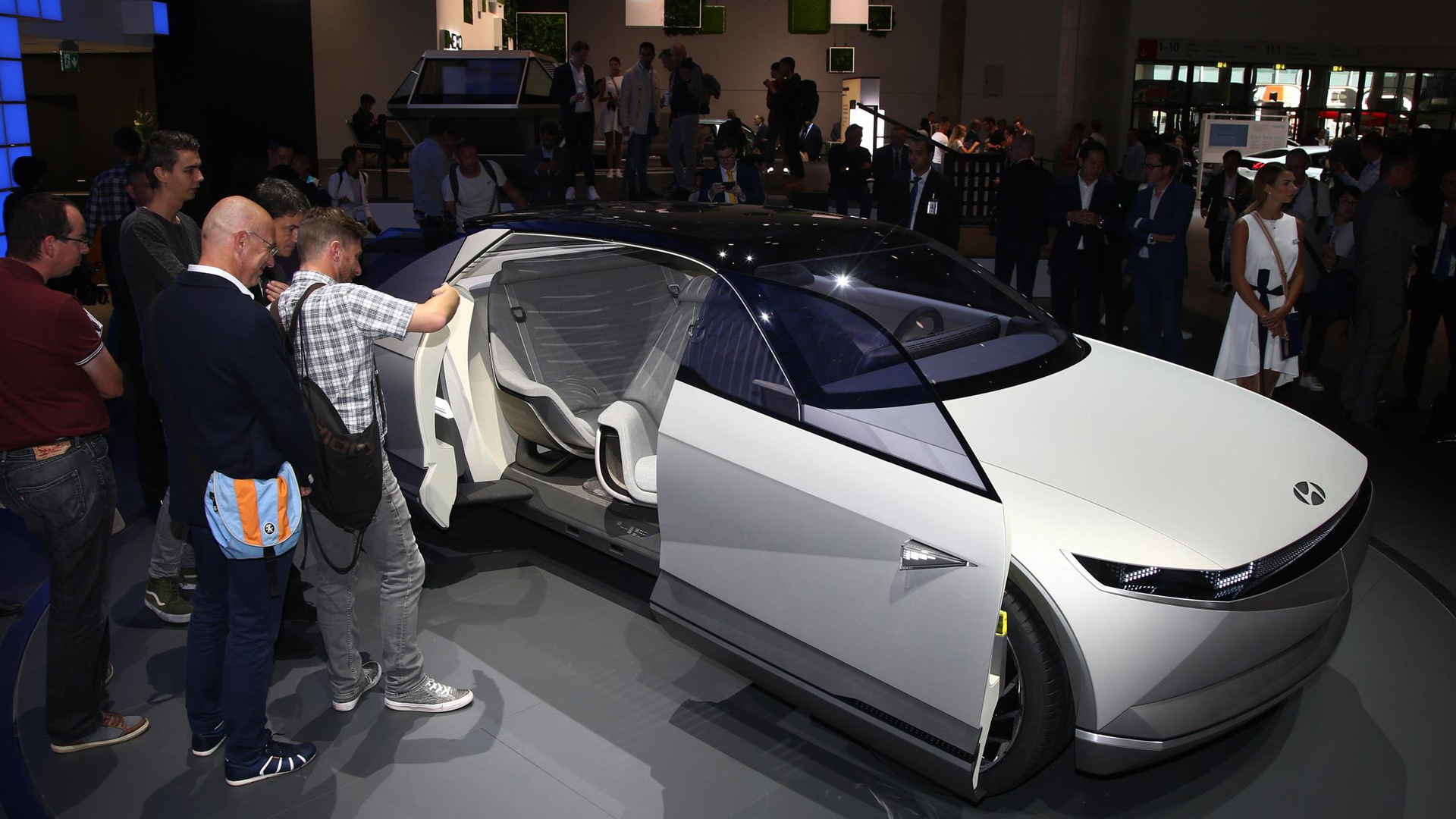 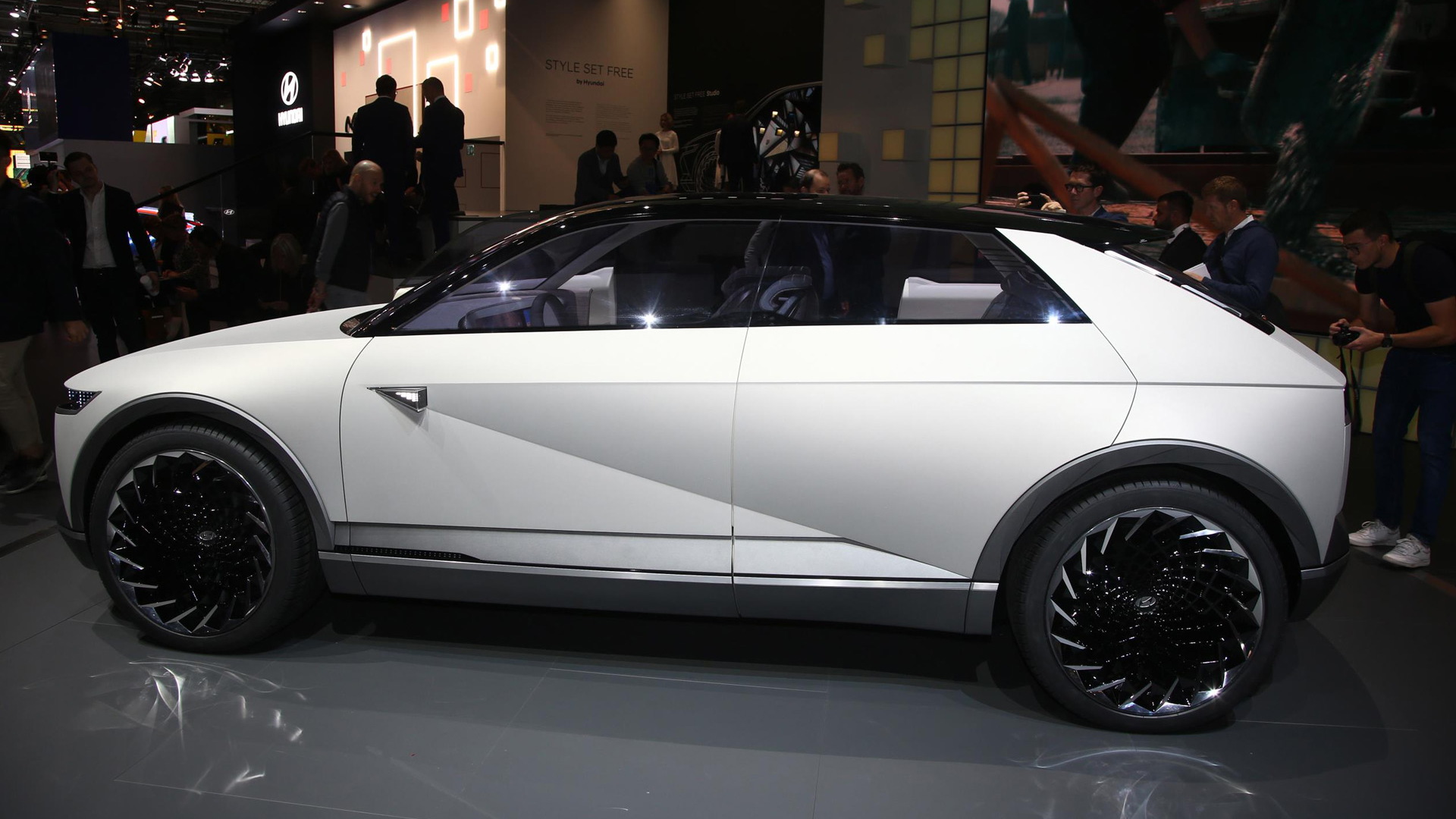 Hyundai used the Frankfurt International Motor Show to preview the design direction of its future electric cars with a new concept called the 45.

The name is a reference to this year's 45th anniversary of the unveiling of the wedge-shaped Pony Coupe concept that went on to spawn the Pony production model a year later. The Pony was the first model to wear the Hyundai badge.

The design of the 45 concept explores an evolution of the current Sensuous Sportiness design language that Hyundai introduced with 2018's Le Fil Rouge concept and has since transferred to the 2020 Sonata sedan.

Specifically, it shows how the design language could be interpreted for a world of electrification (and also self-driving capability). Hyundai, like the rest of the automotive world, is out to show that electric cars don't need to be boring, and it's doing so by highlighting the packaging possibilities that electric powertrains provide.

Unique to the 45 is the blacked-out rocker panels that highlight the flat battery that's packed within. LEDs located here give the driver information on the charge state before they enter vehicle, helping them to plan ahead. Other blacked-out areas at the front and rear of the vehicle provide a space for cameras and sensors that could one day be employed for self-driving capability.

For the interior, the designers attempted to create a lounge-like feel. A wide digital screen provides all the vital information to the driver while the rest of the cabin is left bare to create a relaxing environment. Materials include wood, fabric and leather.

Hyundai already offers electric cars in the form of the battery-electric Ioniq Electric and Kona Electric and fuel cell-electric Nexo. The automaker is also thought to be working on an electric sports car with EV expert Rimac, though it isn't clear if the 45 concept's lines will influence this model.