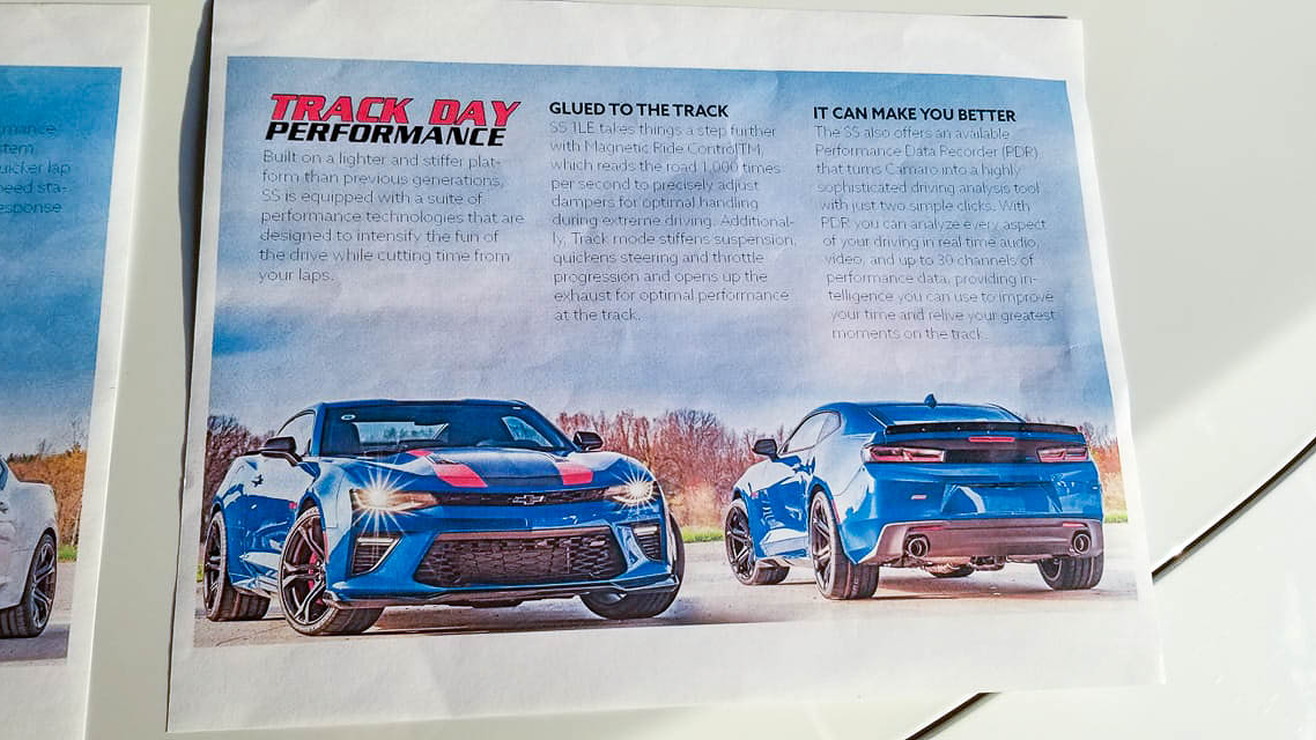 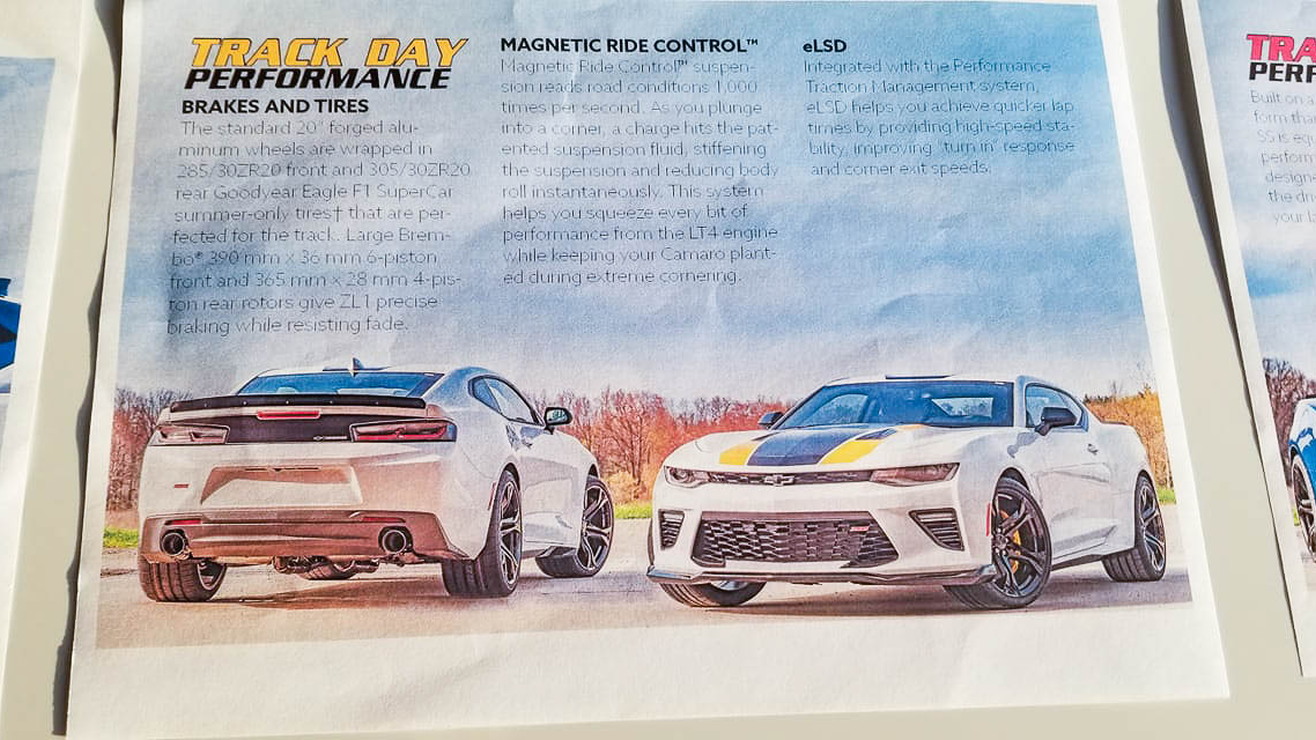 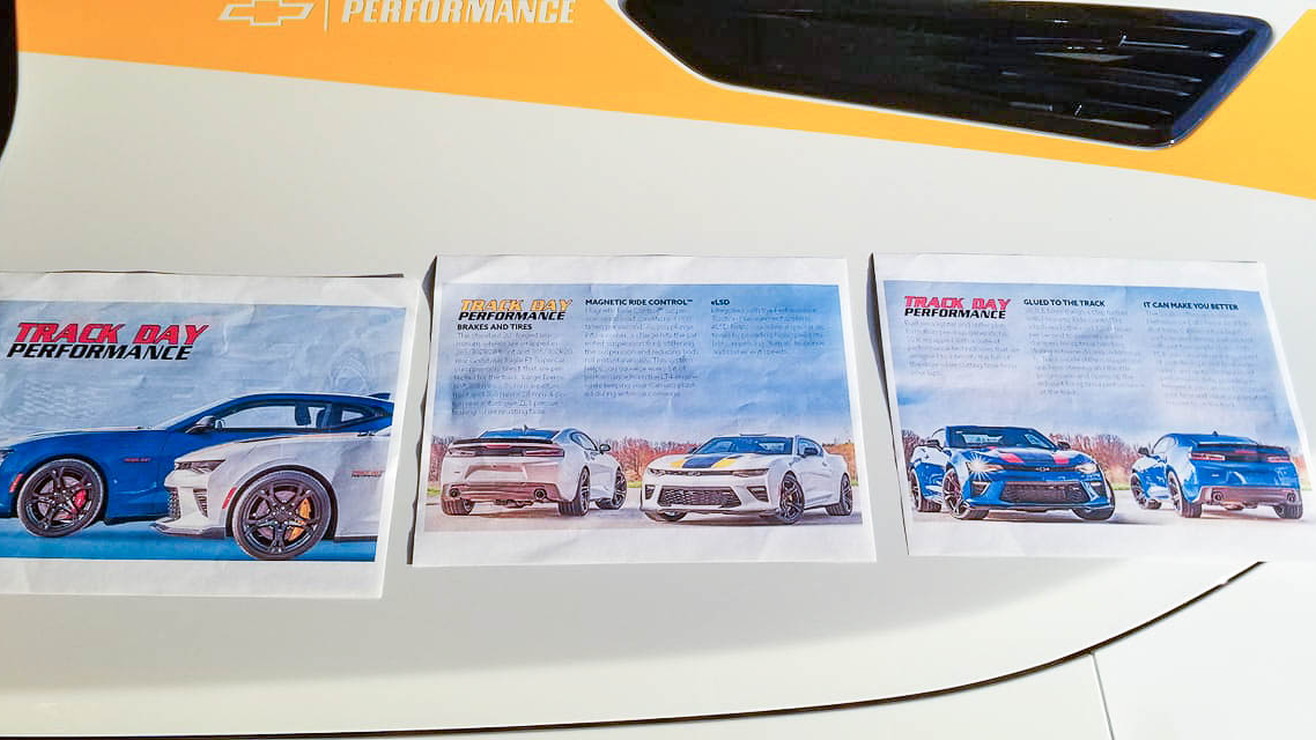 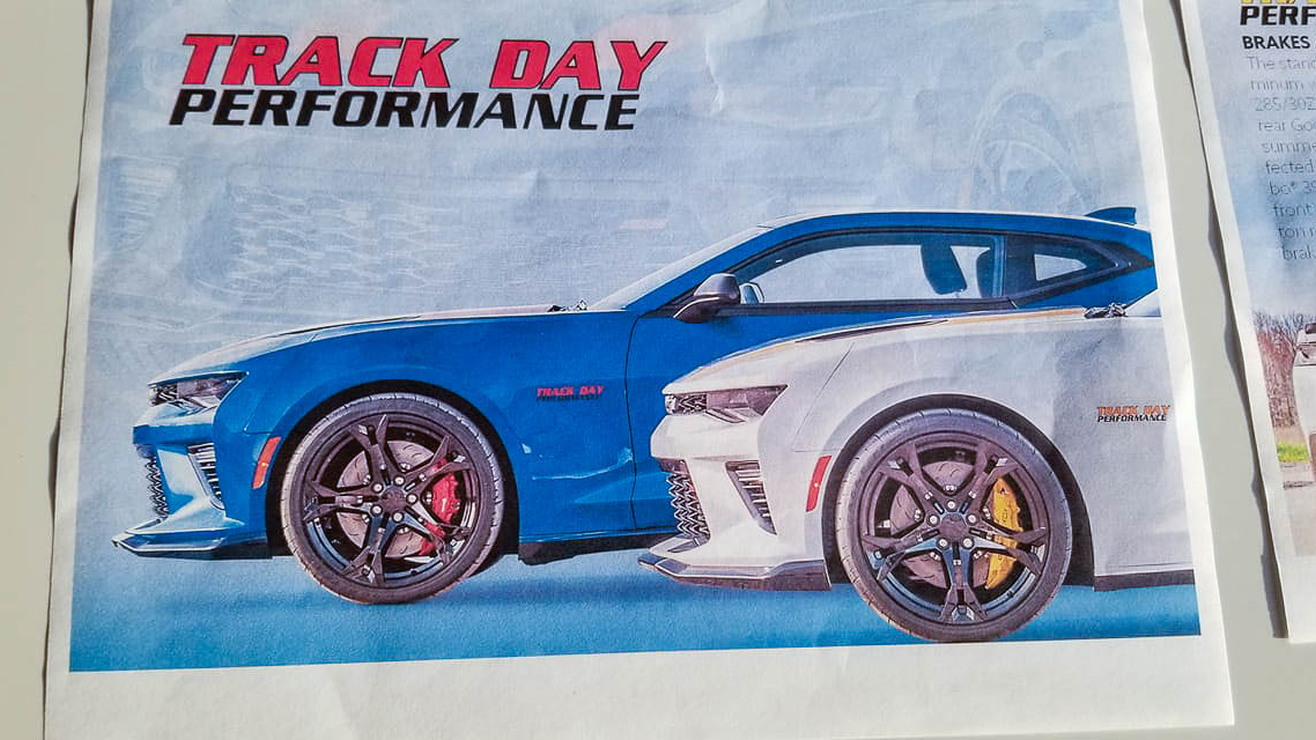 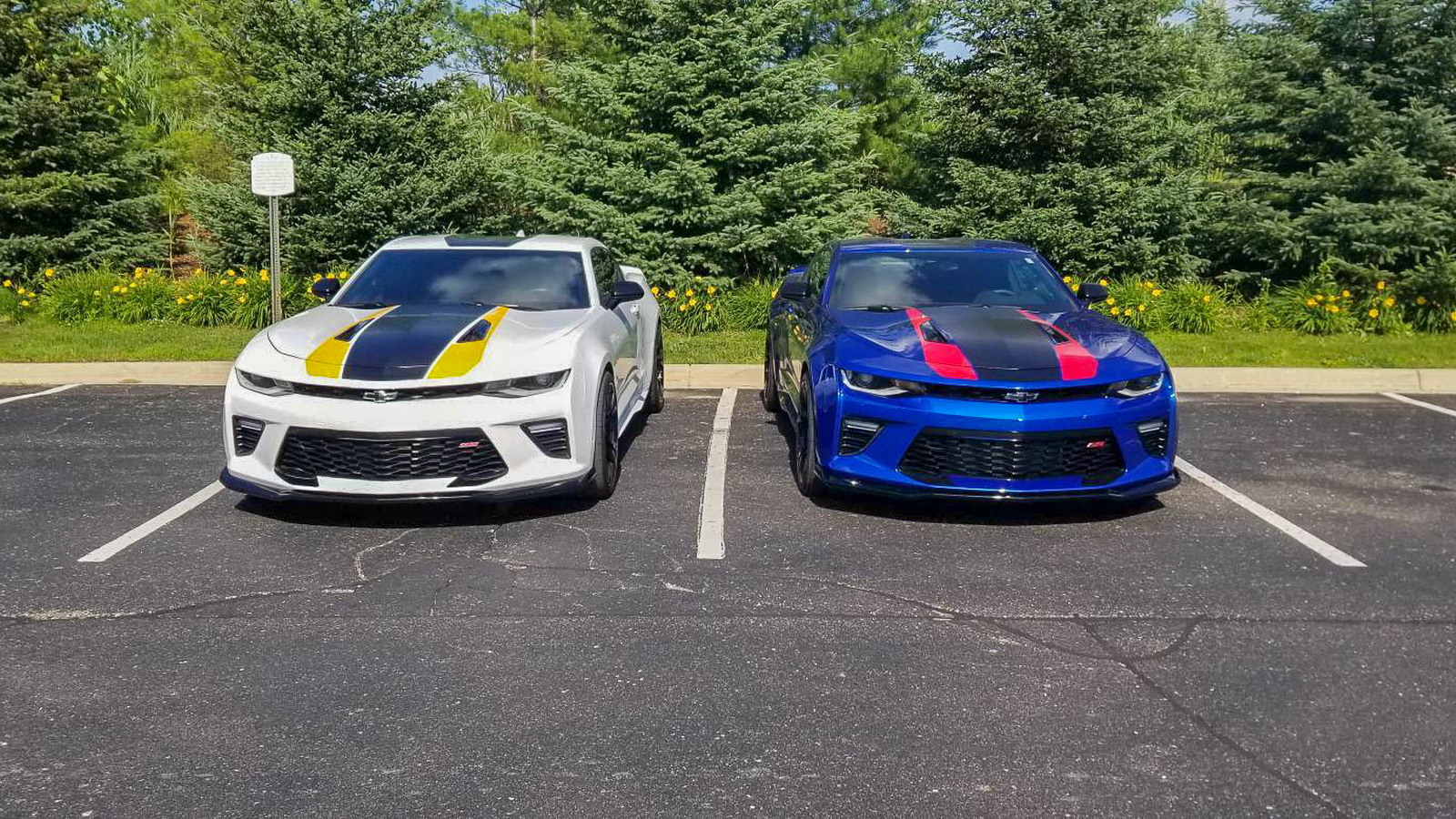 Gaines Stevens, a civilian military employee from New Baltimore, Michigan, walked into Ed Rinke Chevrolet in nearby Centerline in April of 2017 to buy a Chevrolet SS sedan. He drove off the lot in one of two street-legal prototype Camaros built by COPO, the parts ordering system that was co-opted 50 years ago to create performance cars.

His friend Kamran Osenbaugh, a drywall finisher from Belding, Michigan, bought the other prototype.

Rich Rinke, the gearhead in charge of COPO, isn’t just a quarter-mile guy, according to Stevens. Through COPO, Rinke builds special-order, track-only Camaros for drag racing, but he wanted to do more than that. He wanted COPO to build a car that could rail around a road course, and be street legal. Thus, the Track Day Performance Camaro was born in 2017...well almost. 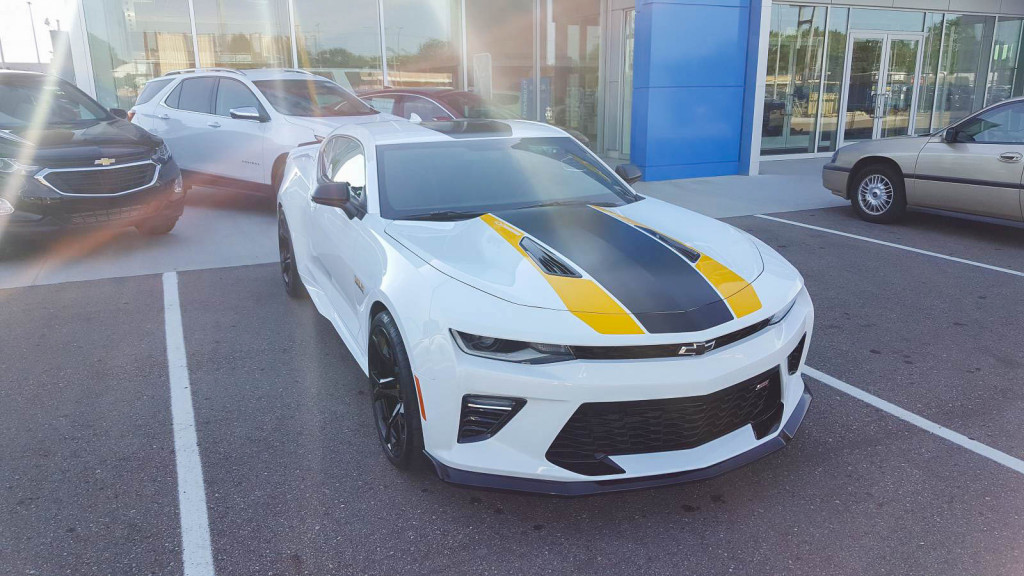 Ed Rinke is the owner of Ed Rinke Chevrolet, and Rich Rinke is his nephew. Neither responded to our questions for this story, but Stevens and Osenbaugh said the two Rinkes planned to have COPO build either 100 or 200 Track Day Performance Camaros and sell half of them through Ed Rinke Chevrolet, a quarter through Berger Chevrolet in Grand Rapids, Michigan, and a quarter through Hendrick Chevrolet dealerships.

Only two were ever built, and both were sold through Ed Rinke Chevrolet.

Rich Rinke told Osenbaugh the cars, known as 001A (Steven’s white car) and 001B (Osenbaugh’s blue car), are “basically test mules.” The prototypes were built to see how long it would take to acquire the parts and assemble the cars to make the program happen.

The Track Day Performance program was scrapped after the two cars were built. Rich Rinke told Osenbaugh the program was cancelled due to “logistical problems” with getting all the parts at the same time.

When Osenbaugh asked Rich Rinke why these two track-day cars didn’t have GM’s Performance Data Recorder (PDR) or Recaro seats and (both available on the Camaro), Rinke said “that’s why we scrapped it.” The seats were eight weeks out, the rocker panels were four weeks out, and the team simply couldn't get everything at the same time to build the cars.

Stevens is in possession of the only known set of marketing materials for the Track Day Performance Camaro’s (Stevens made a copy for Osenbaugh), and the materials say that PDR was to be available. Neither car 001A or 001B has a PDR.

Rich Rinke told Osenbaugh the COPO center didn’t have the room and time for the cars to sit and wait for parts. 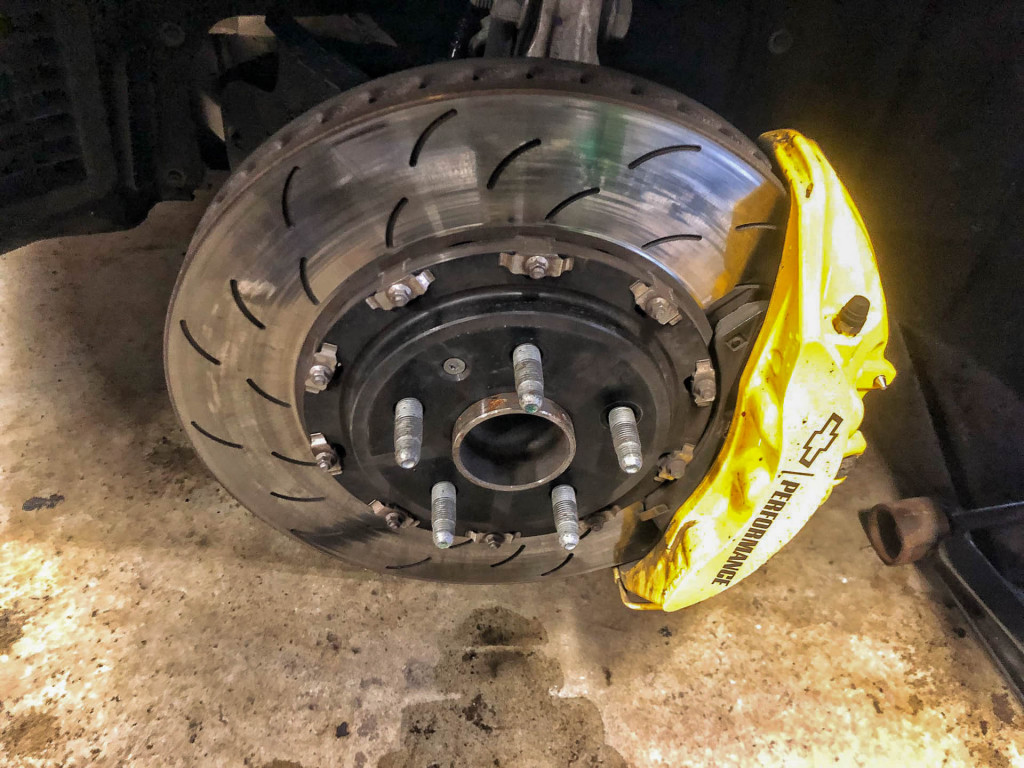 The parts list for the Track Day Performance Camaro reads like a track-day junkie’s wish list. The cars started life as 2017 Camaro 1SS models at Ed Rinke Chevrolet. They were then shipped to COPO in Wixom, Michigan, to have the following installed: painted ZL1 rocker panels (which are typically black and unpainted on ZL1s), a rear blade spoiler with a wicker bill in place of the high-rise 1SS spoiler, 20-inch 1LE wheels and tires with Goodyear Eagle F1 SuperCar 285/30s up front and 305/30s in the rear, a GM Performance exhaust system, a strut tower brace from the 2015 Camaro Z/28, Magnetic Ride Control dampers, an electronically controlled limited-slip differential, a GM Performance Big Brake Kit with 15.4 x 1.4-inch Brembo rotors and 6-piston calipers up front and 14.4 x 1.1-inch rotors and 4-piston calipers in back (essentially a Corvette Z06’s upgraded brake setup), smoked taillights, and vinyl decals. 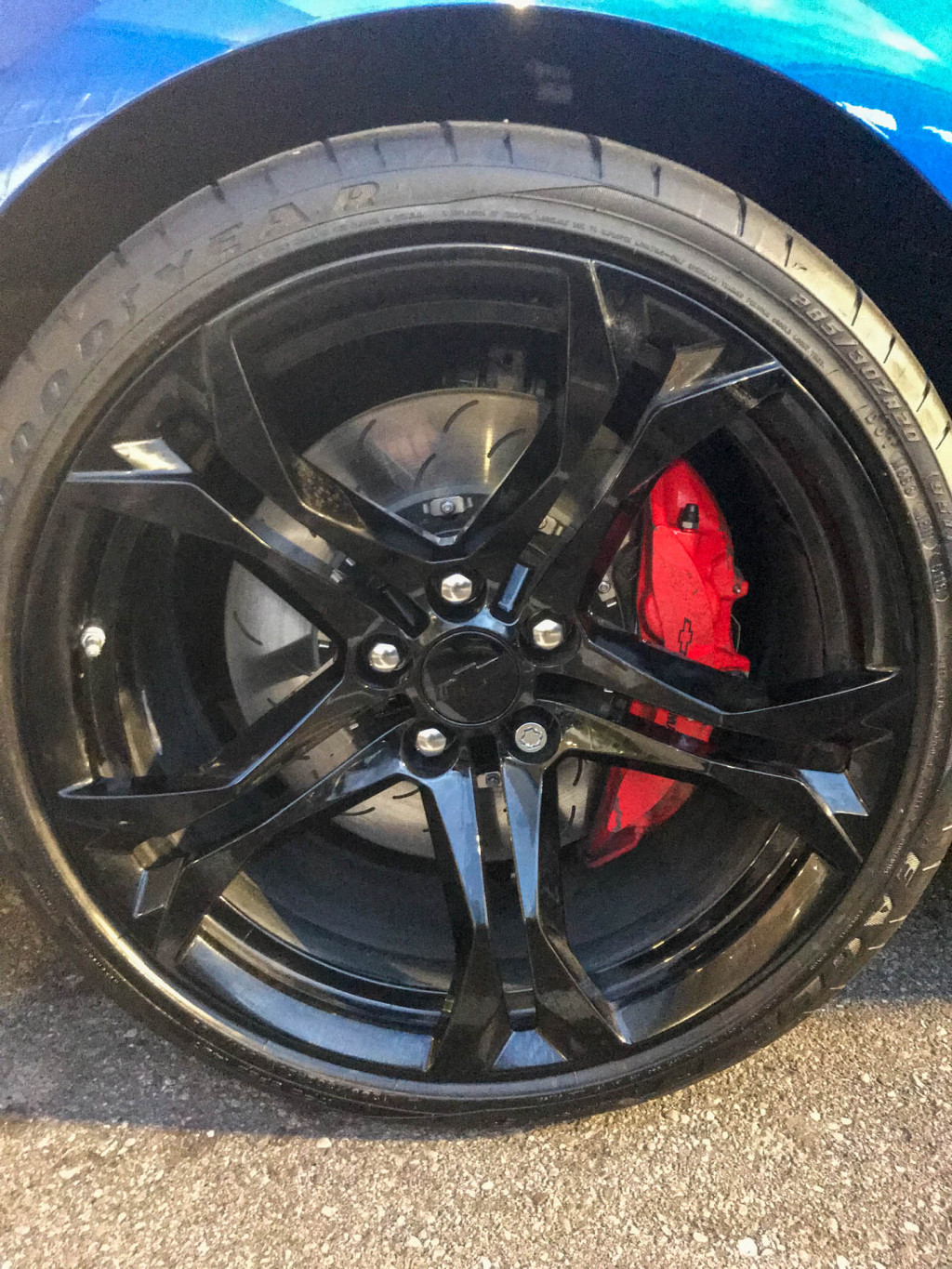 The drivetrains are stock Camaro 1SS. That means a naturally aspirated LT1 6.2-liter V-8 with 455 horsepower and 455 pound-feet of torque lies under each hood. Power is sent to the rear wheels via a 6-speed manual transmission. 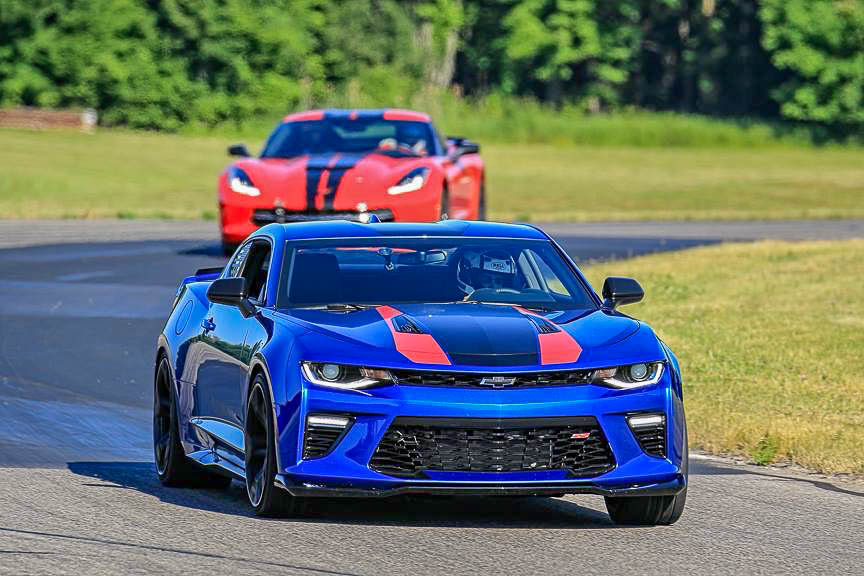 While there’s no documentation that the engine was tuned or remapped, Osenbaugh wonders if the team at COPO worked some magic on the engines as the cars seem to have a “little more get up and go than other 2017s.”

Stevens bought the 001A white car in May of 2017, and Osenbaugh bought the 001B blue car in that November after meeting Stevens and seeing the car on the Excitement Tour at the famed Tail of the Dragon mountain pass. The cars were listed for between $50,000 and $57,000 and both Stevens and Osenbaugh paid just under $50,000. Each car came standard with a GM 3-year/36,000-mile warranty. 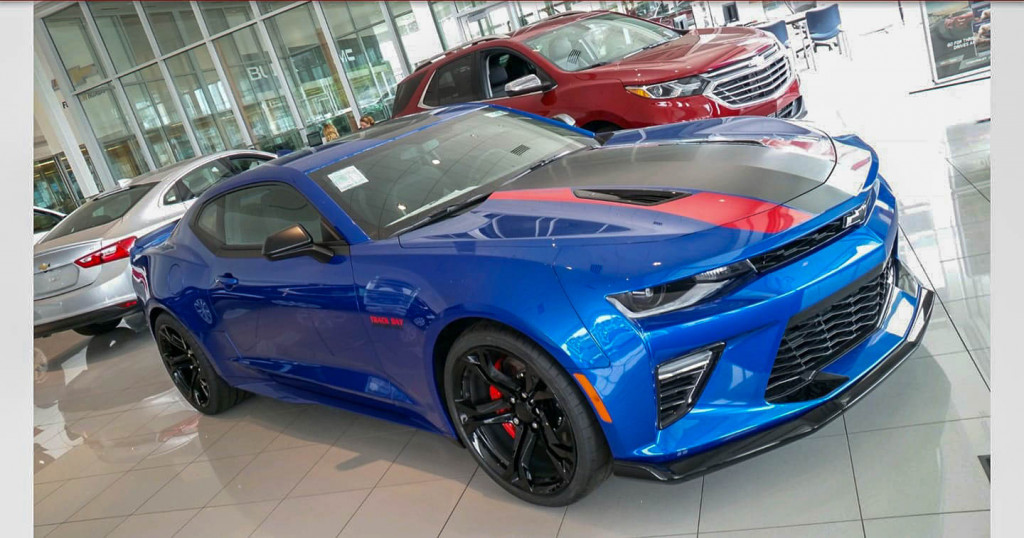 Mike Lawrence was the project manager for the COPO Track Day Performance Camaro. While Motor Authority confirmed Laurence’s role in the program, he didn’t respond to further questions about the project.

Chevrolet spokesman Kevin Kelly told Motor Authority, “This wasn’t a GM program, it wasn’t sanctioned, or a vehicle by Chevrolet. It was by (Rich) Rinke.” 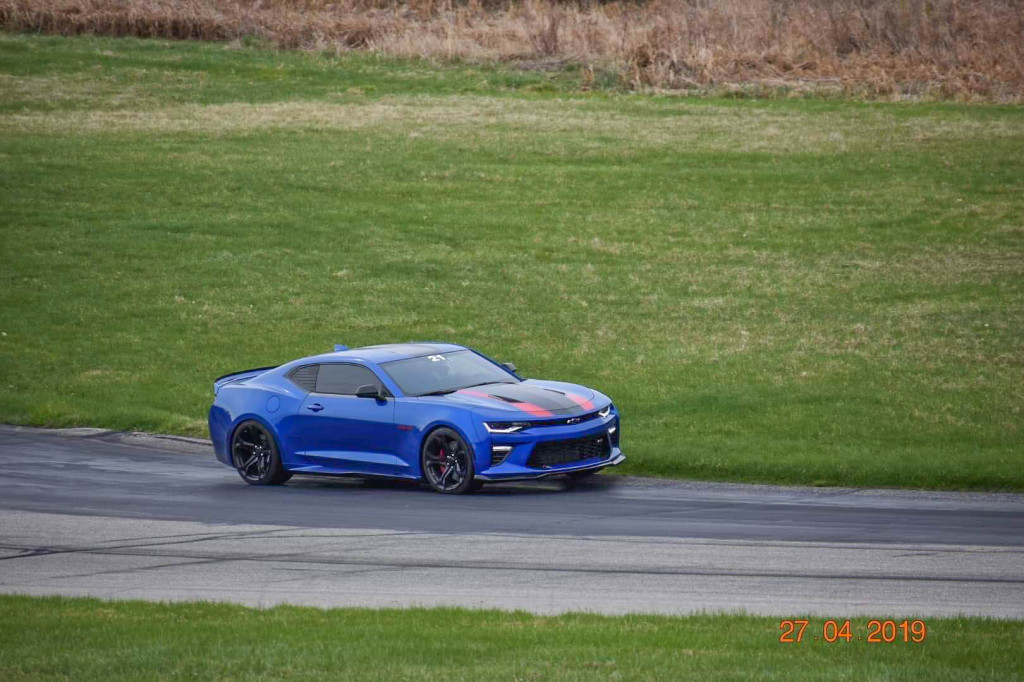 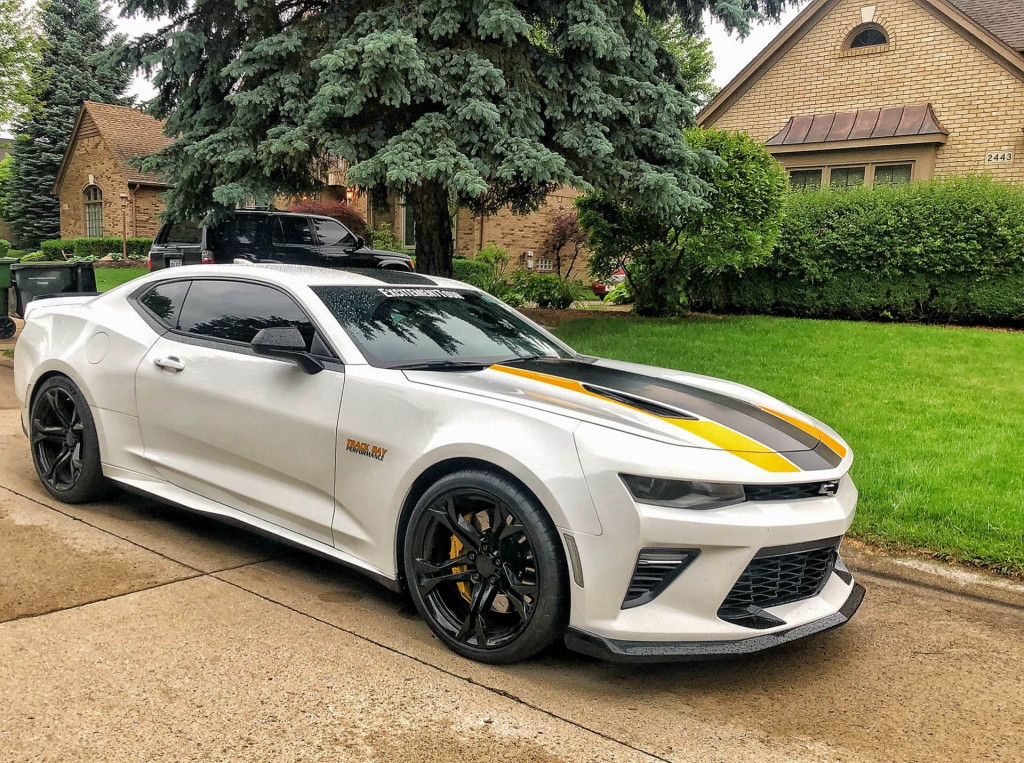 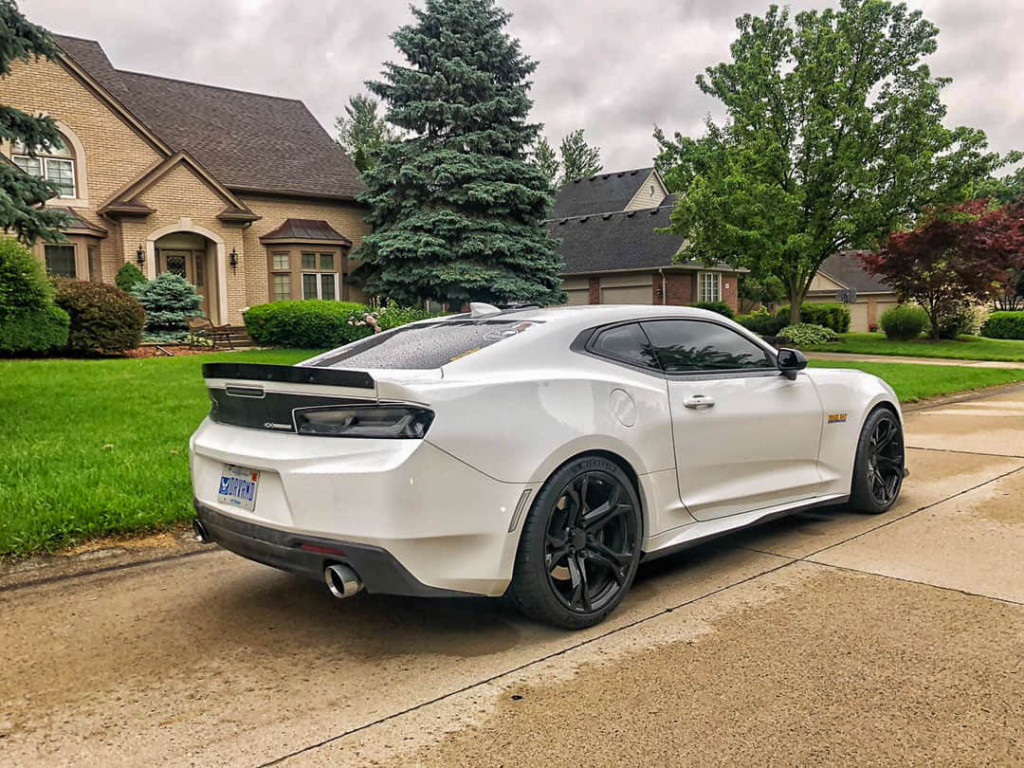 Today, Osenbaugh’s blue 001B car is still “stock” with nearly 4,000 miles on the odometer (including about 700-800 are track miles). Stevens’ white 001B car has about 15,000 miles on it and has been modified with Kooks long-tube headers, a Chevrolet Performance intake, Texas Speed ported and polished heads, and a more-aggressive cam. In June, Stevens installed an E85 FlexFuel kit and had it tuned, though Stevens said he has all the stock components so 001A could be put back to stock in the future. 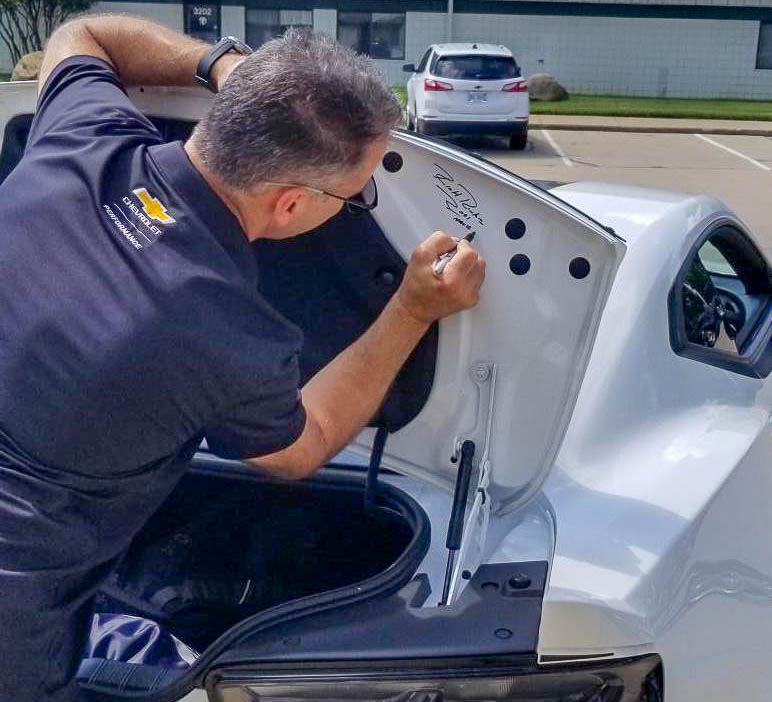 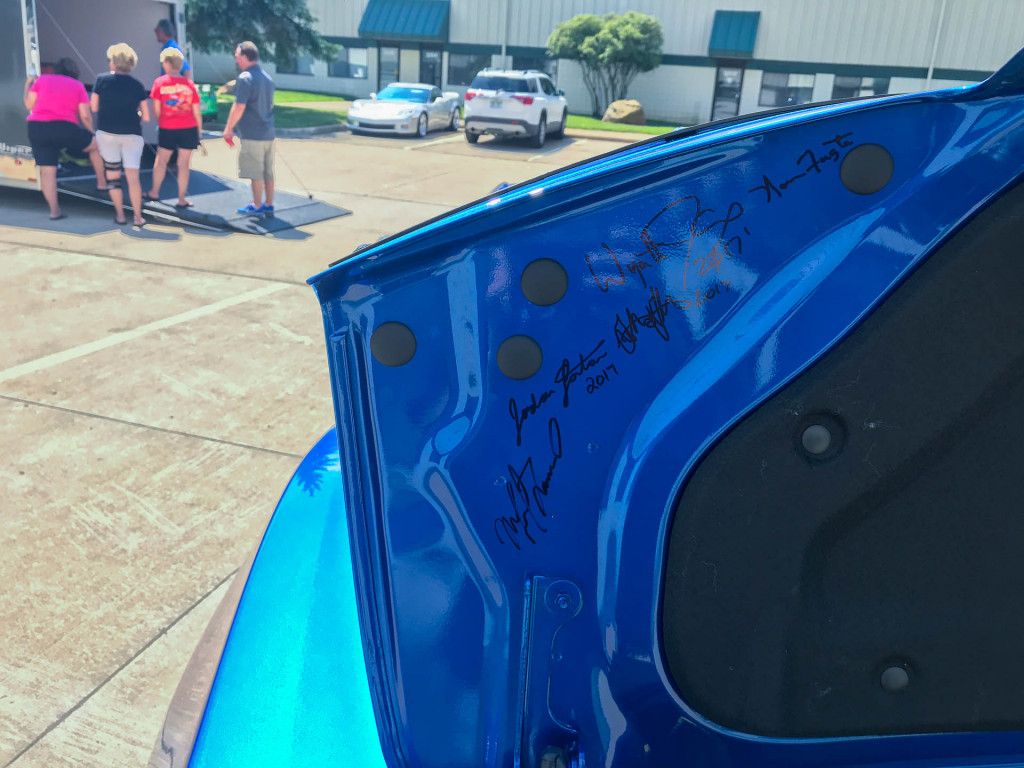 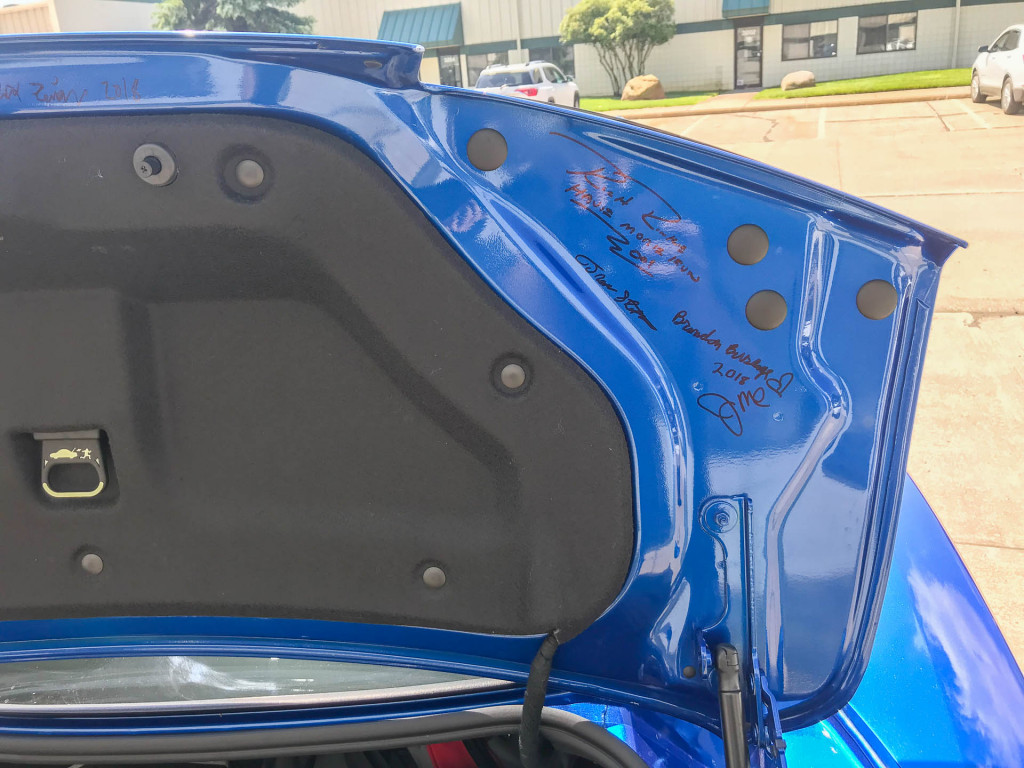 Osenbaugh says he and Stevens were invited to the COPO Center in July of 2018 with the cars. The two Track Day Performance Camaro owners shook Rich Rinke’s hand, met the team that built the two cars, and then everybody that touched the cars at COPO signed the the cars.

All signs point to these Camaros being the only two examples of a stillborn program. Osenbaugh says Rich Rinke promised him and Stevens certificates of authenticity for the two COPO-built cars during that meeting at the COPO Center a year ago.

While he’s still waiting for that certificate, he gets the joy of driving a Camaro with GM’s best performance parts...all because his buddy wanted a Chevy SS in April 2017.