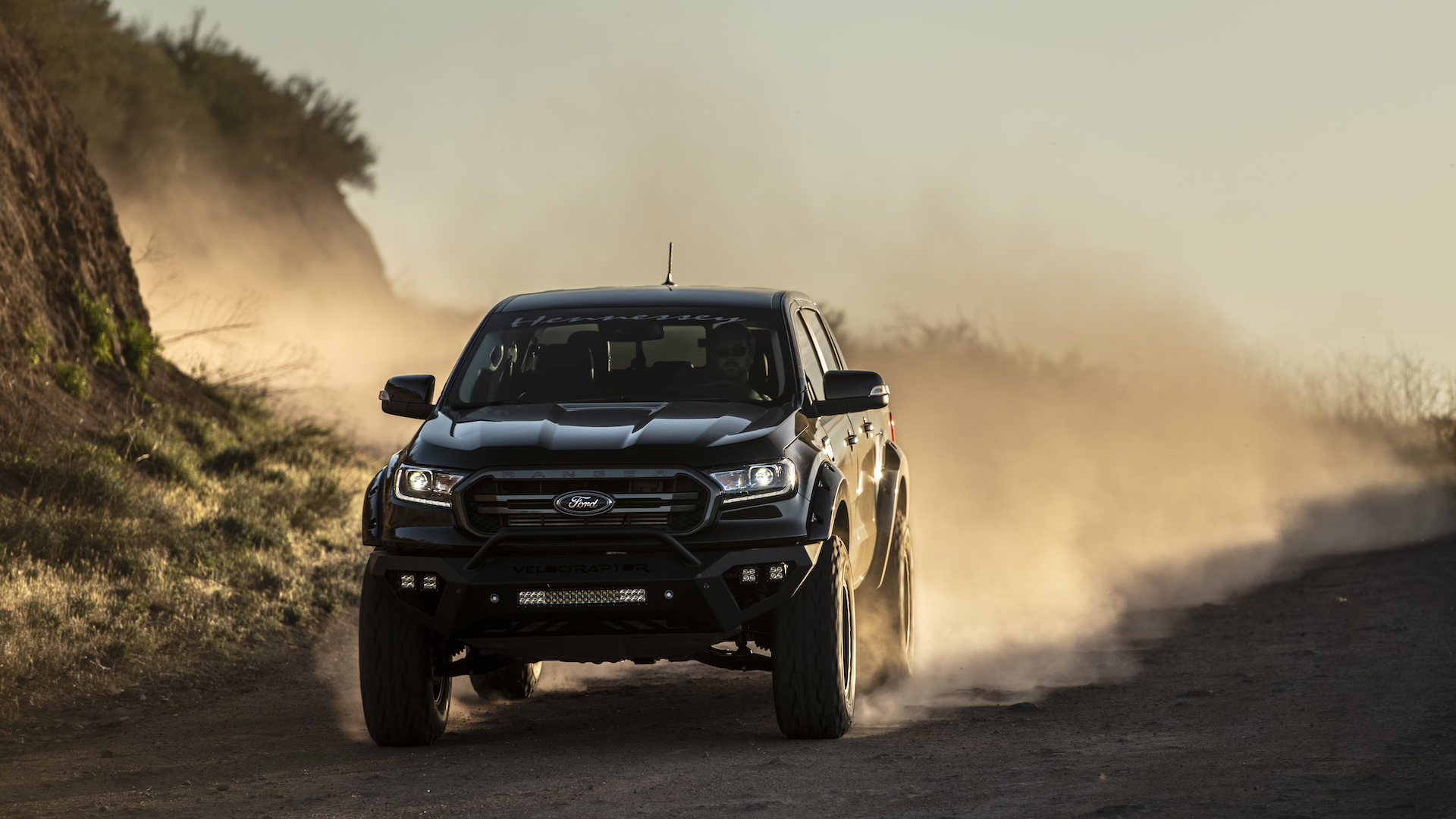 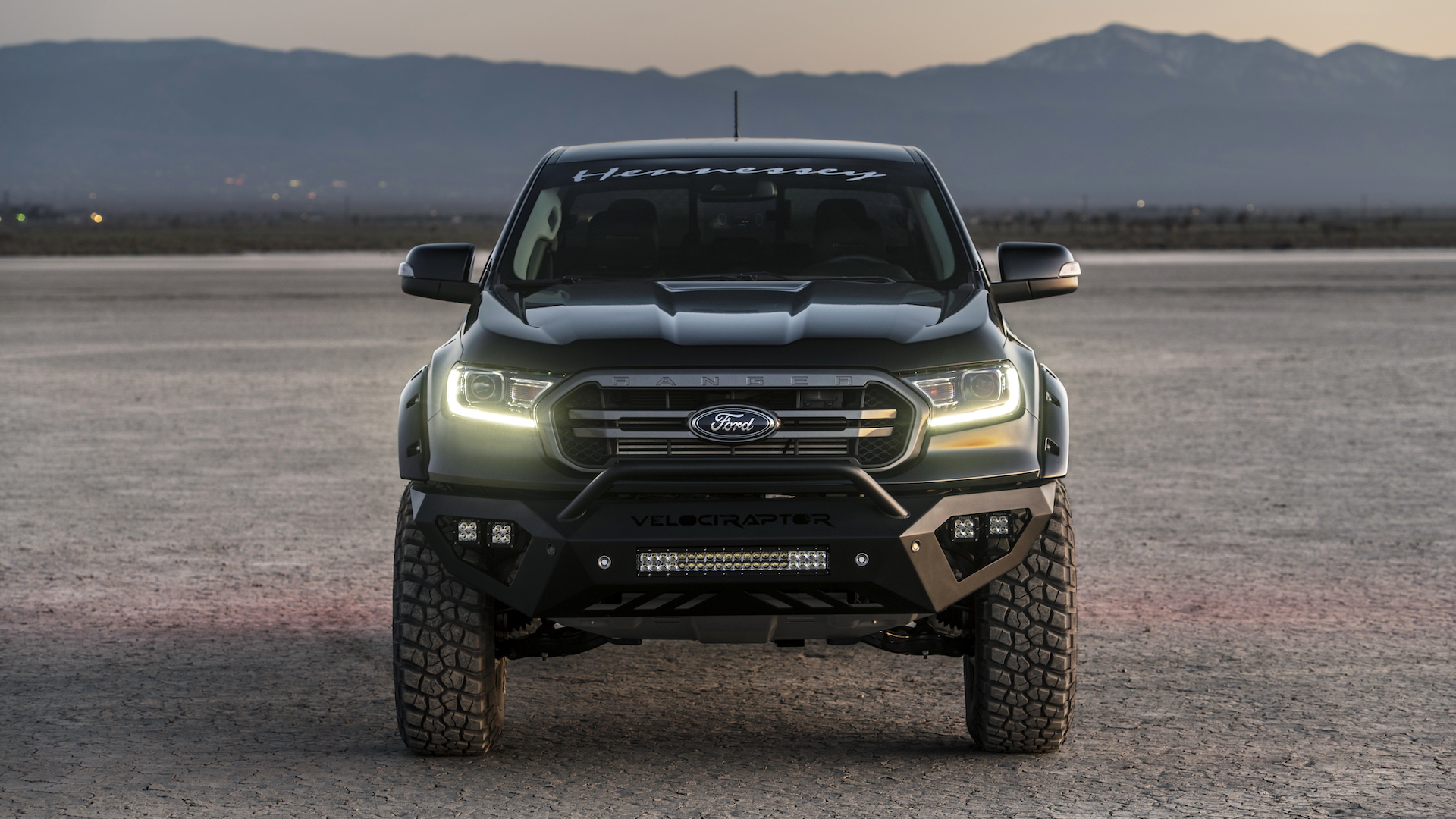 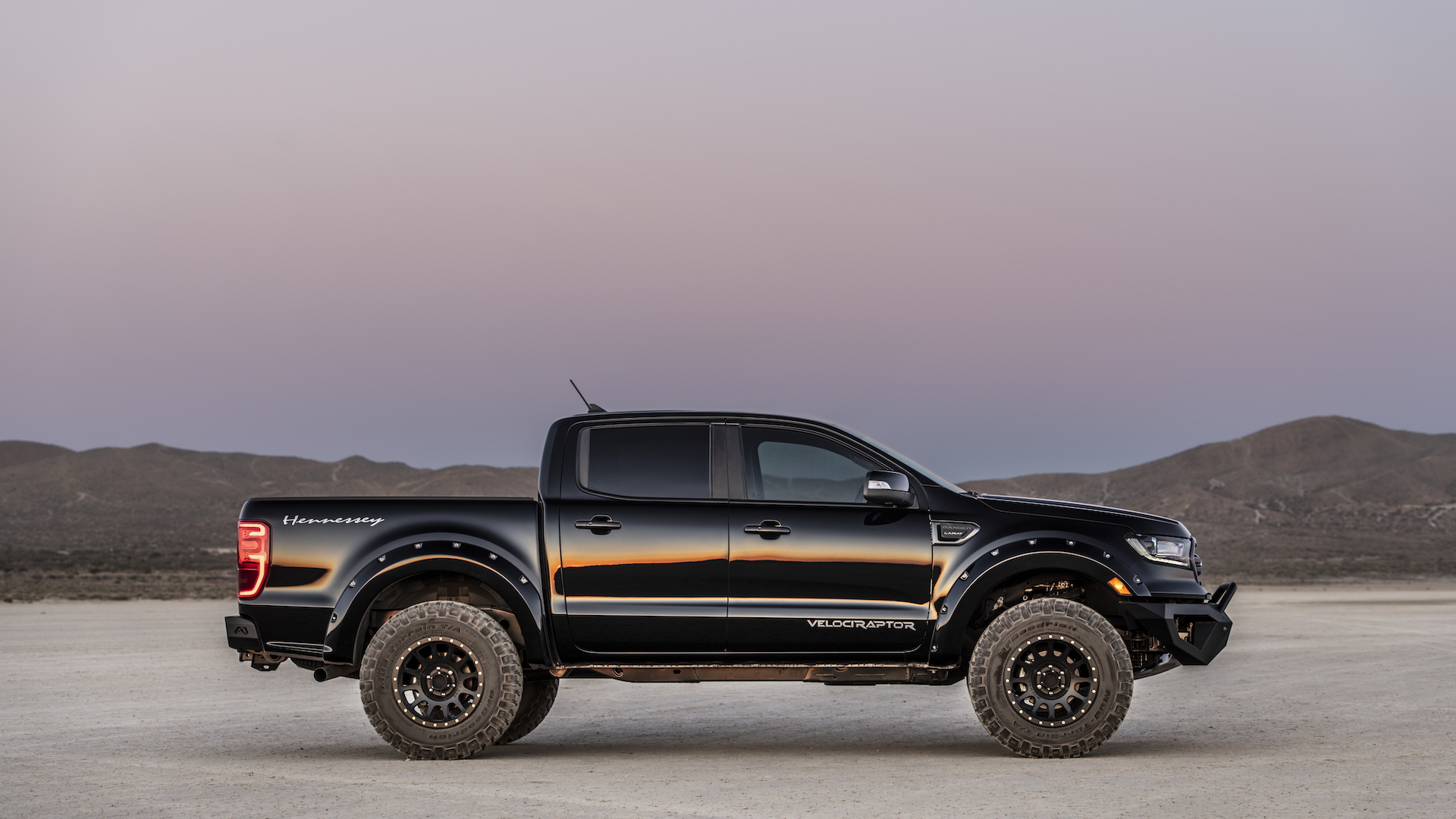 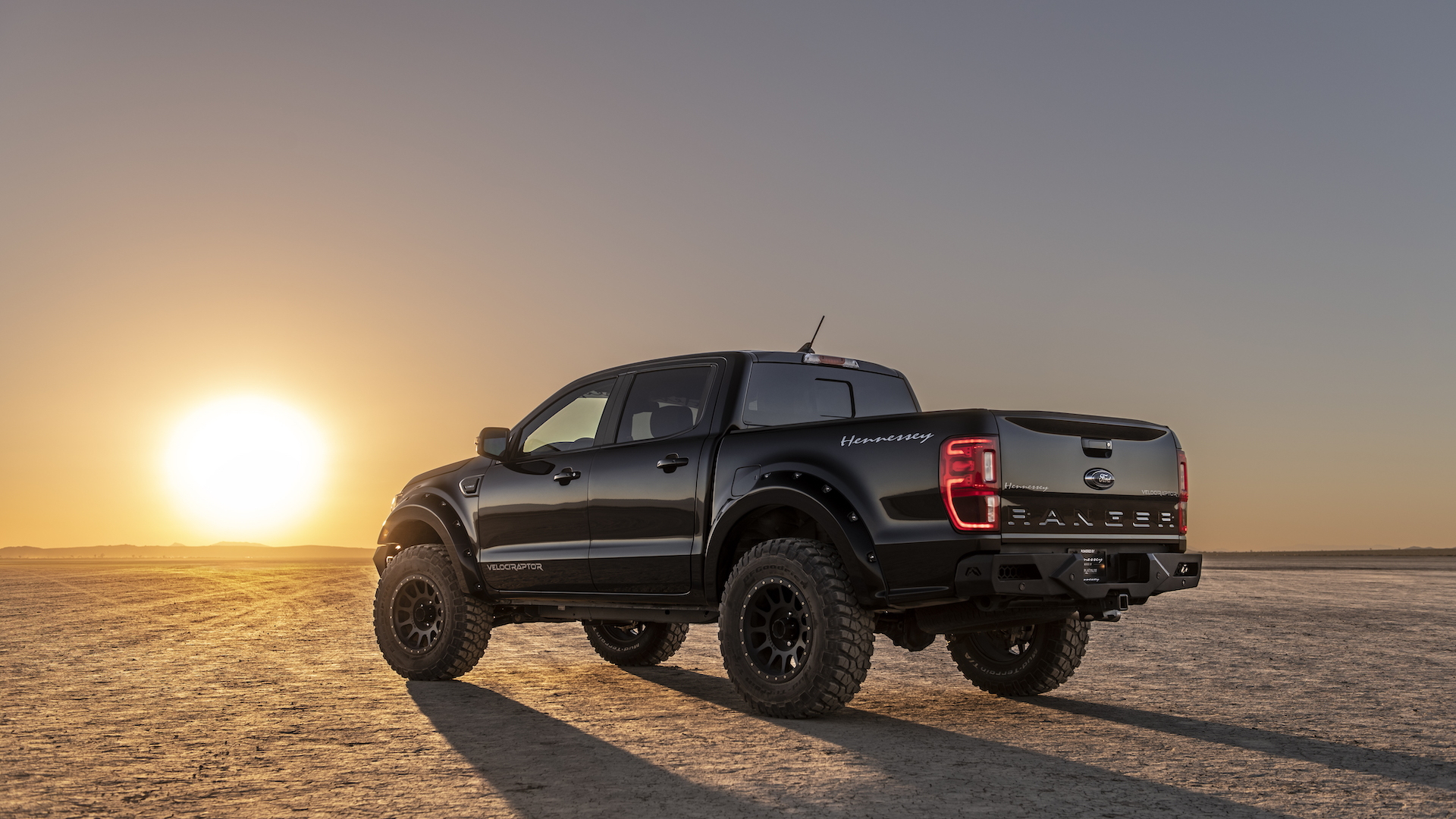 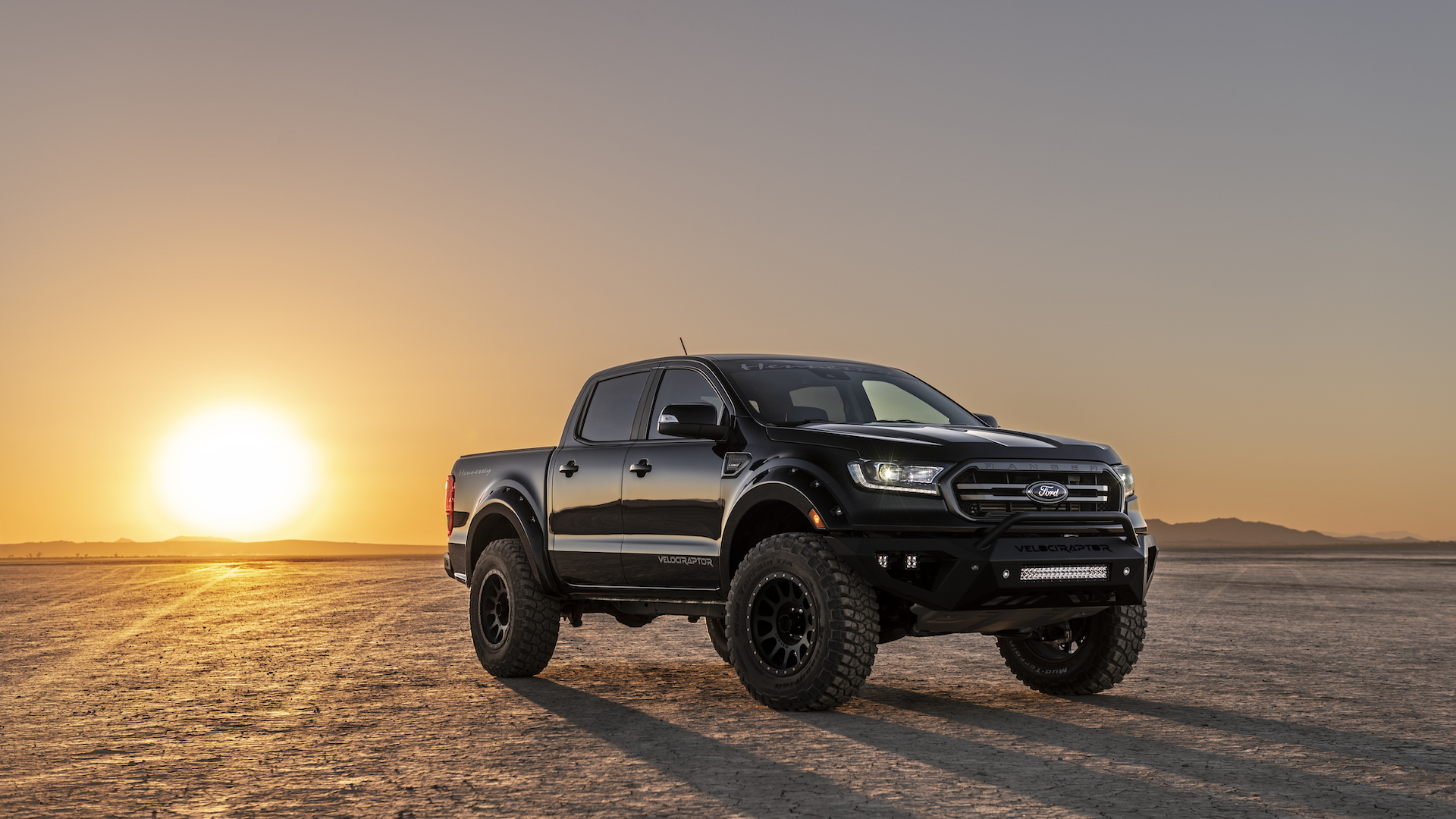 Ford may not have plans to grace Americans with a Ranger Raptor from the factory, but that hasn't stopped Texas-based Hennessey Performance Engineering from doing it anyway.

After announcing plans for the Hennessey VelociRaptor Ranger last month, HPE dished out the final specifications for its performance-oriented mid-size pickup truck, and it's quicker than a stock F-150 Raptor. The VelociRaptor Ranger comes with 360 horsepower and a healthy 440 pound-feet of torque. Both of those figures are higher than HPE's prior estimates of 350 hp and 385 lb-ft of torque. A stock 2019 Ford Ranger's 2.3-liter turbo-4 engine makes 270 hp and 360 lb-ft of torque.

The video, shown above, compares HPE's latest creation to a standard Ford F-150 Raptor, which makes 450 hp. The lighter weight and performance upgrades outdo the beefier F-150 as the VelociRaptor Ranger leaves the full-size pickup a couple of truck-lengths behind in a 0-100-mph drag race.

Unlike some of HPE's other builds, this one doesn't use any additional turbochargers or other forced induction. Instead, HPE has applied its engine management system upgrade and increased air flow where deemed necessary. The pickup also gains a less restrictive cat-back exhaust. The upgrades shoot the VelociRaptor Ranger from 0-60 mph in 4.9 seconds.

To be worthy of the VelociRaptor name, which has graced previous F-150 Raptor builds from HPE, the Ranger also gets off-road performance upgrades. The company added its Stage 1 off-road suspension package, which includes a 4-inch lift, BFG Mud Terrain TA KM2 tires, and 18-inch alloy wheels. The front bumper is unique to the VelociRaptor Ranger and includes LED lights with an option for a winch package.