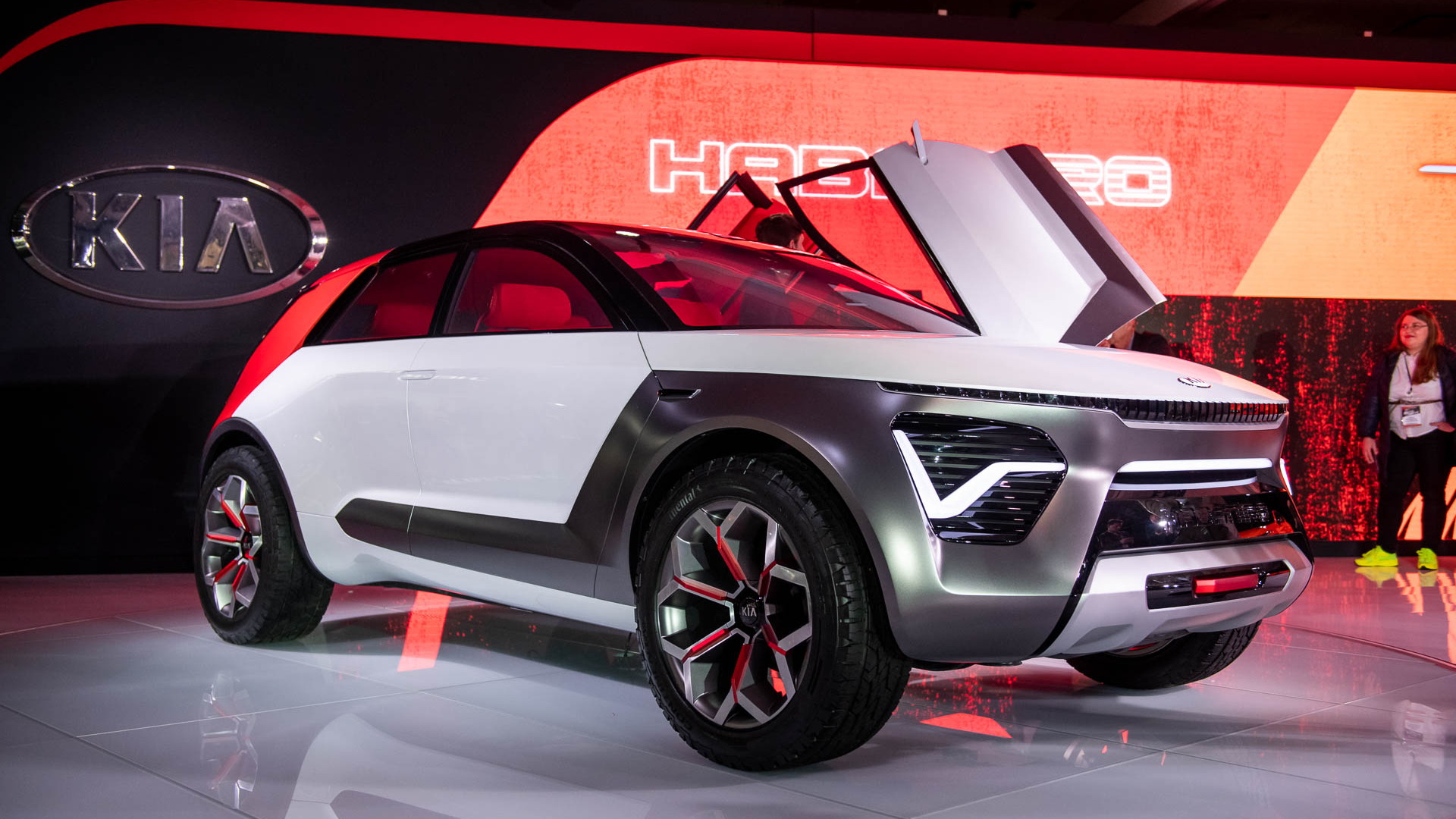 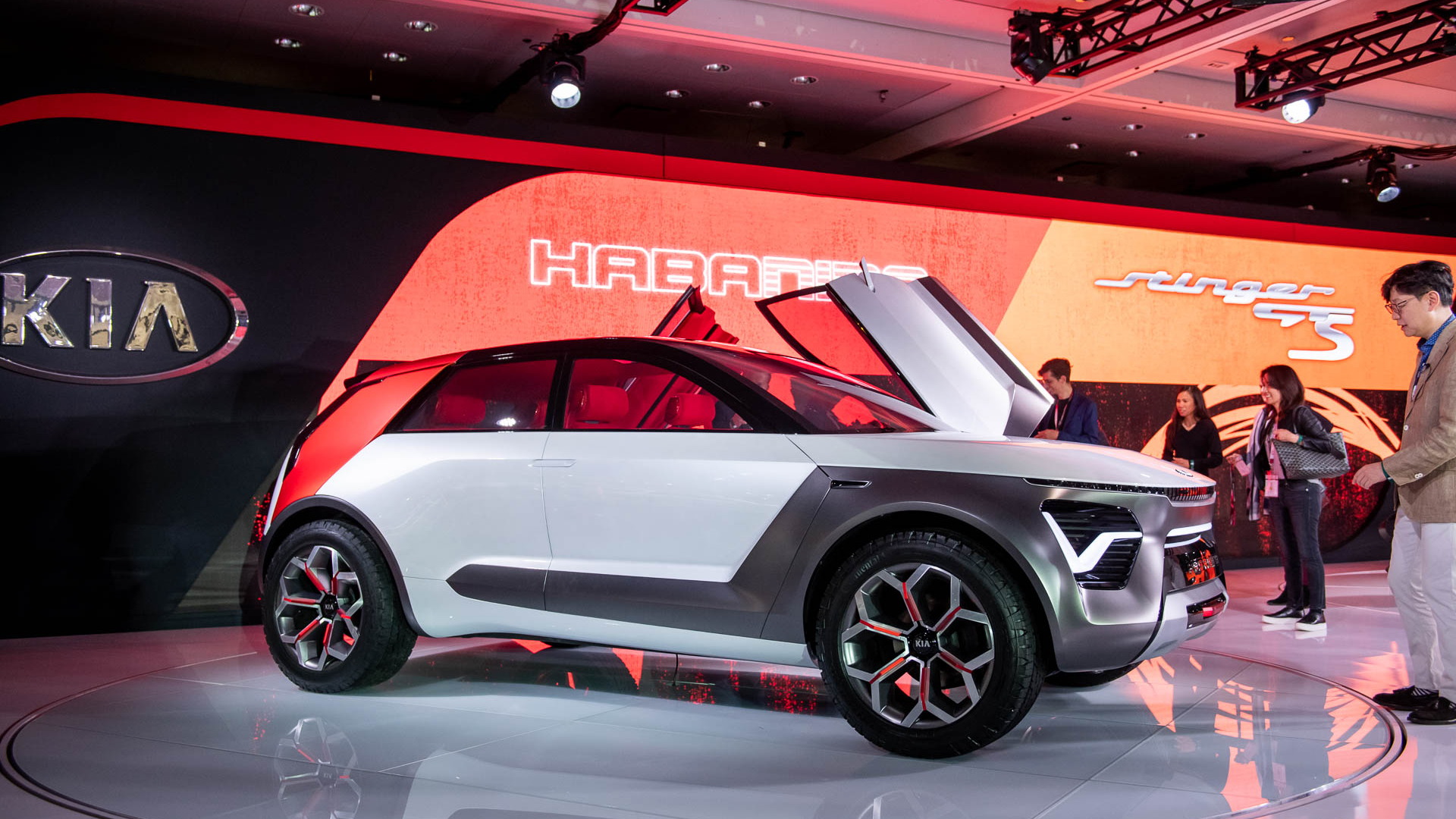 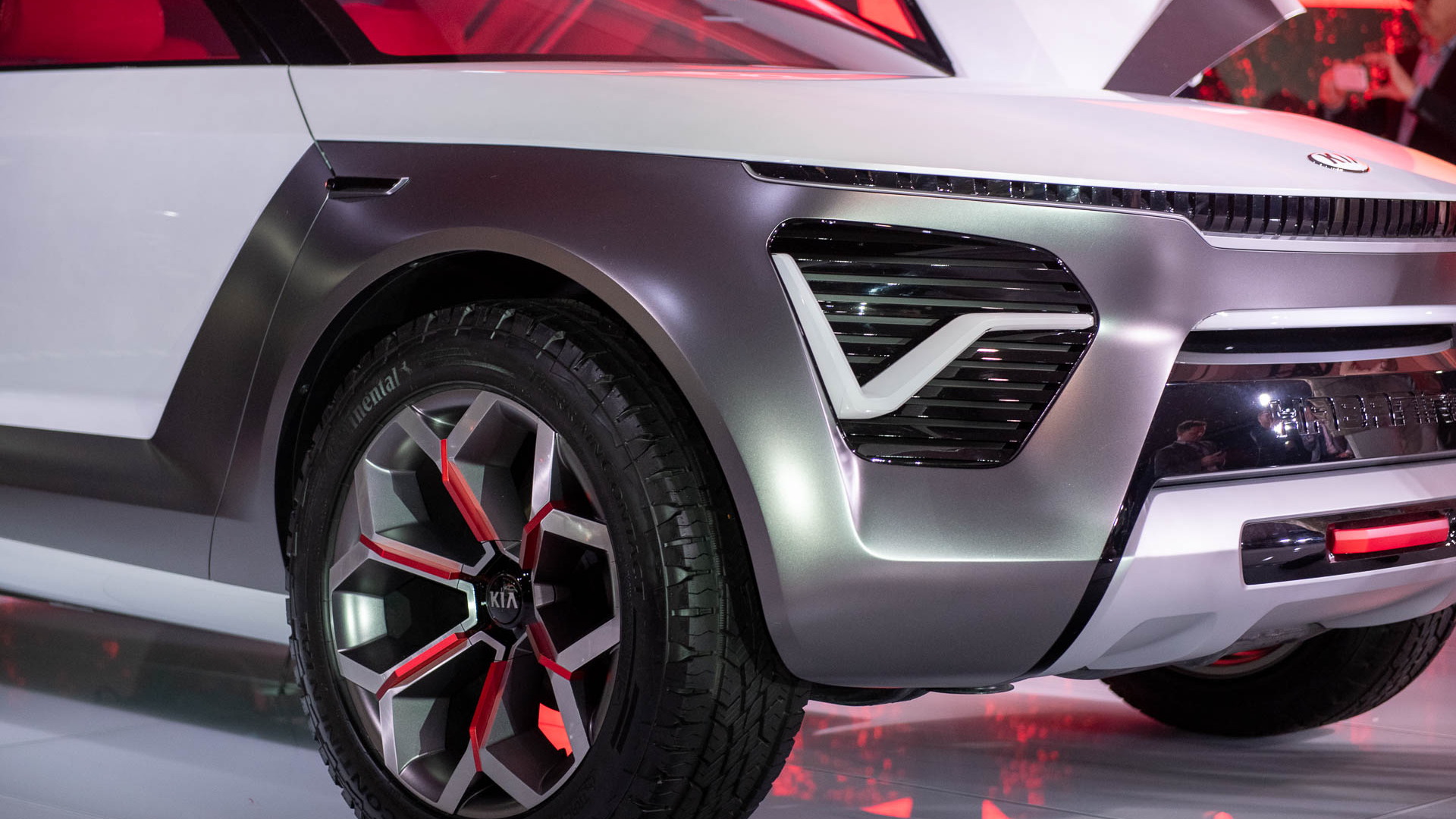 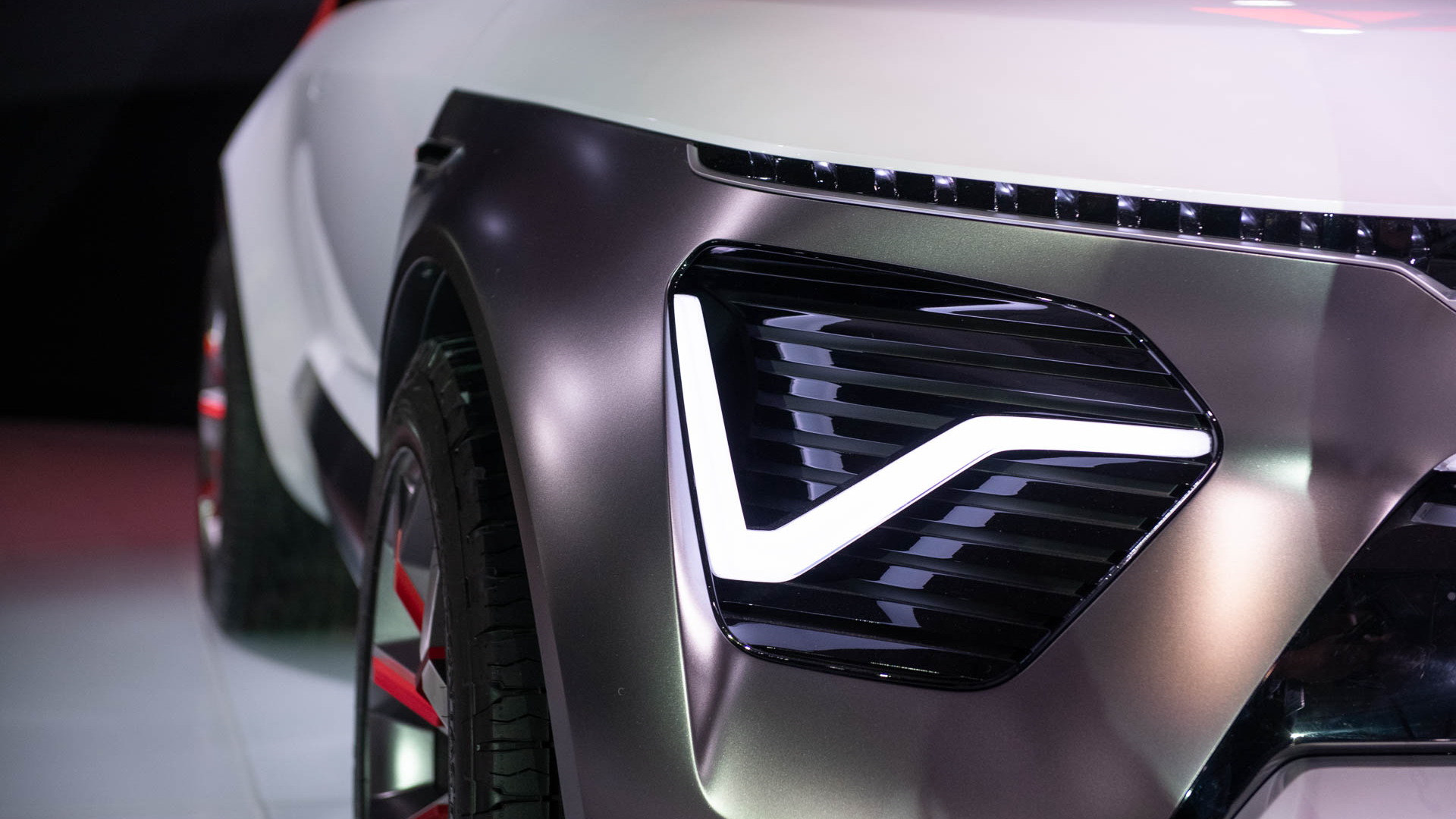 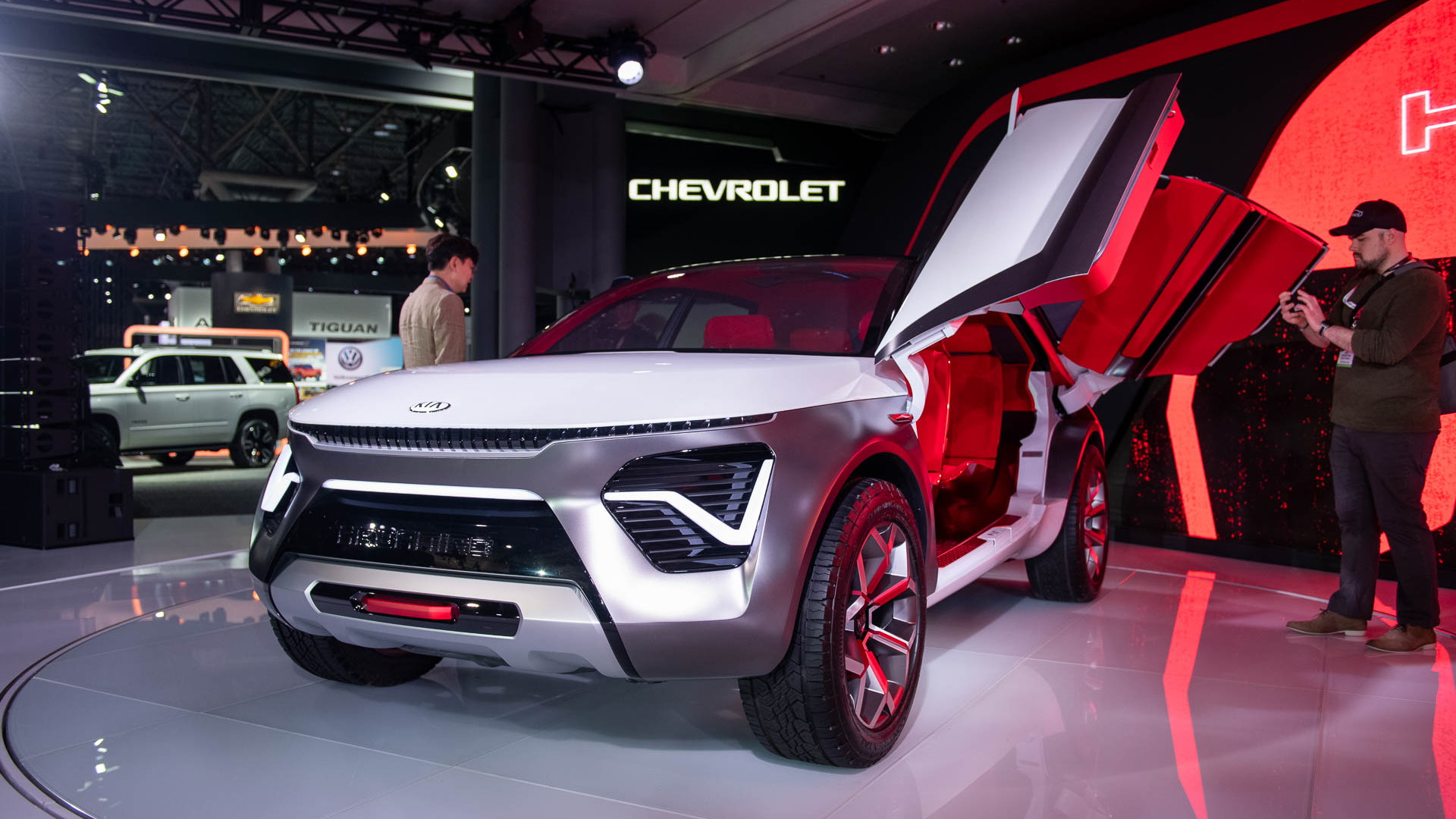 Kia envisions a future where electric cars aren't appliances, but instead, they're a do-it-all kind of vehicle. The Kia HabaNiro concept aims to be just that, and in fact, the brand even coined a new term for the concept car: the "ECEV," or "everything car electric vehicle."

The HabaNiro concept made its debut at the 2019 New York International Auto Show on Wednesday and is meant to convey a similar message. Kia describes it as a four-seat crossover vehicle with the ability to carve corners, scoot around city streets, and even tackle off-road trails. At its core, the brand said the electric crossover houses two electric motors and non-descript "state of the art battery technology." The powertrain is enough to provide over 300 miles of electric driving range, according to Kia. The zesty crossover measures 171 inches long, 63 inches high, and 77 inches wide, which makes it a few inches smaller in every regard than a Kia Sportage.

The exterior is defined by a different interpretation of the brand's typical tiger nose grille. This time the fascia is meant to represent a shark's snout with a slit full of gloss-black "teeth," while LED lights zig-zag through the fascia. Metallic gray cladding covers the front and extends past the front wheels before a silvery-white color breaks it up. At the rear, Lava Red splashes across the C-pillar and across the roof. Kia said the three different colors give the HabaNiro an impression of launching forward. A single character line reinforces the stance, while the electric architecture allowed designers to push the wheels to the further corner for a wide stance.

Meanwhile, satin aluminum skid plates toughen things up and salute the fact the HabaNiro isn't just meant for city streets. Kia added the LED running lights also feature a "heartbeat" pulse to give the impression this electric car is alive.

Inside the HabaNiro concept, it's a tale of two vehicles. Upon entering via the butterfly doors, one will note the concept includes a part-time Level 5 self-driving system, which sees the driver controls folded away for more space. When the HabaNiro drives itself, the windshield becomes a full head-up display for entertainment. A concave instrument panel with a touchpad handles cabin functions and a conceptual system called the Technical Option Sharing System lets passengers move options across the windshield display like chess pieces.

Whether the passenger is driving or not, the Lava Red interior mirrors the exterior color. Designers also worked to make it seem as if the seats float in space.

The concept also features Kia's READ system, which it debuted at the 2019 Consumer Electronics Show. It uses artificial intelligence to monitor a driver's emotional state, which the system uses to tweak interior settings. An eye-tracking system is also present and handles features such as the absense of a rearview mirror. When the system detects the driver is ready to flick his or her eyes to the spot where a rearview mirror normally sits, it displays a 180-degree camera display instead.

Does the HabaNiro have a shot at production? Maybe, Kia said. It noted it's built two production vehicles based on concepts: the Stinger and the Telluride. However, this tangy vision of driving likely needs to cook a while longer.