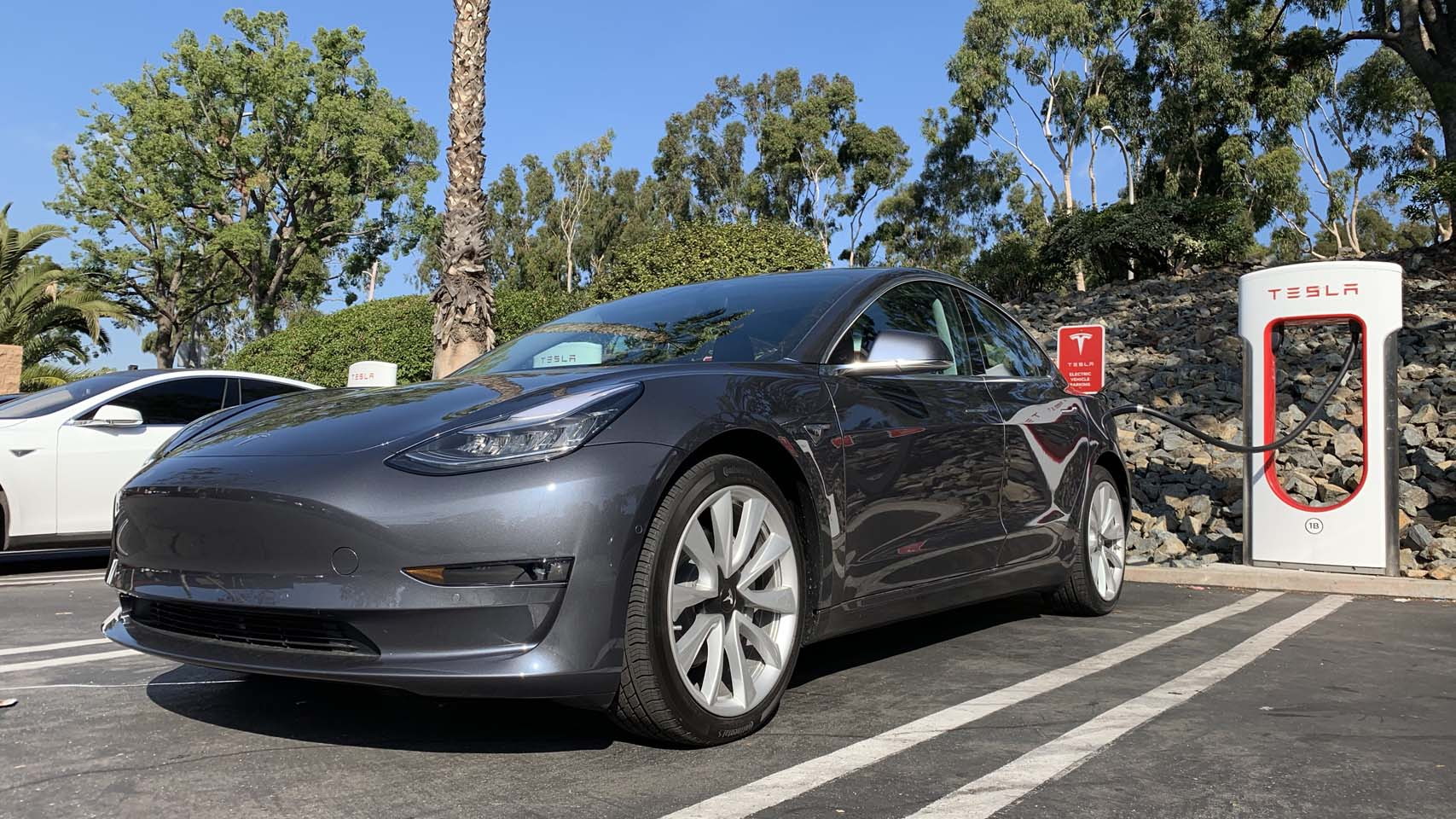 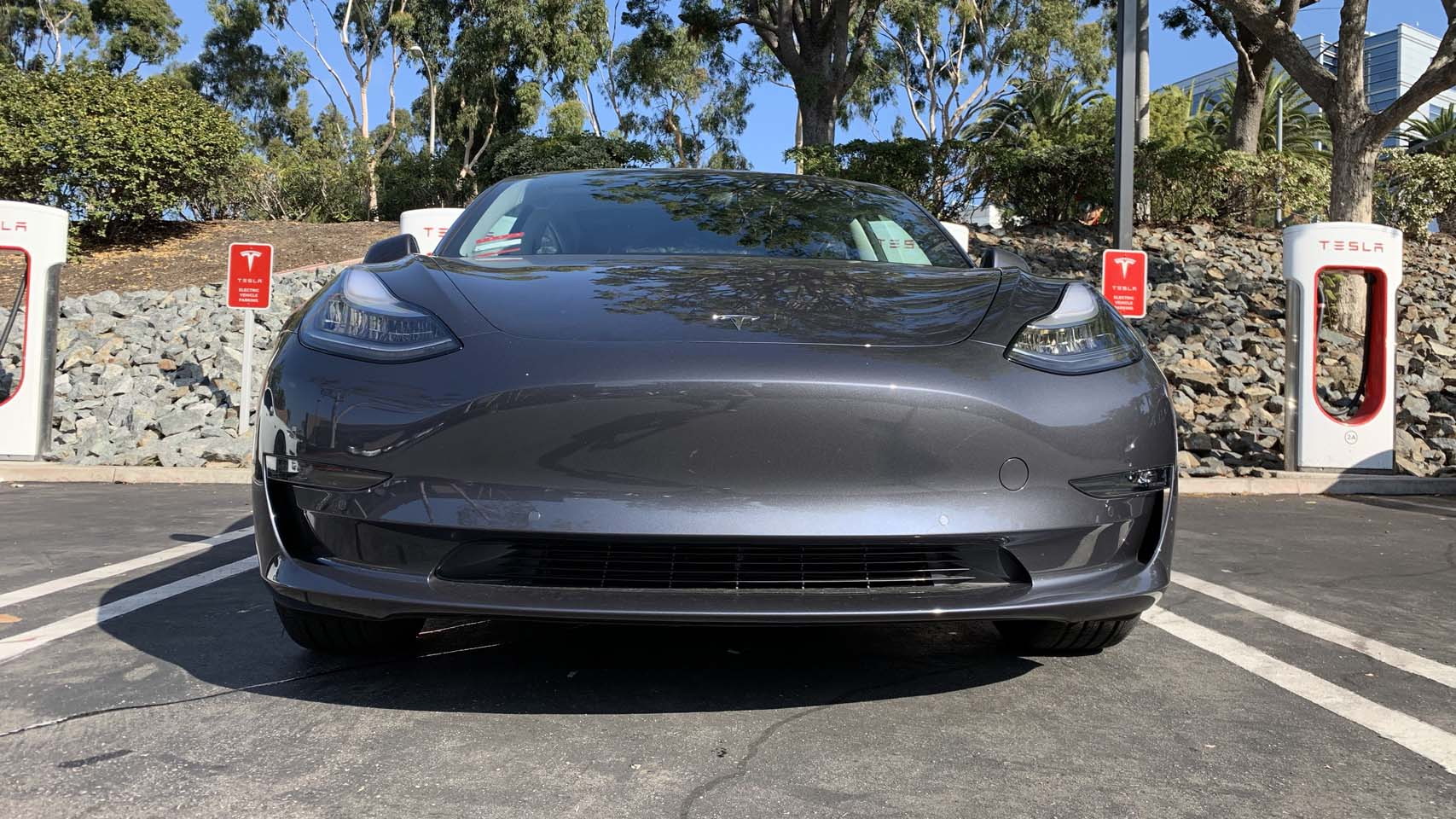 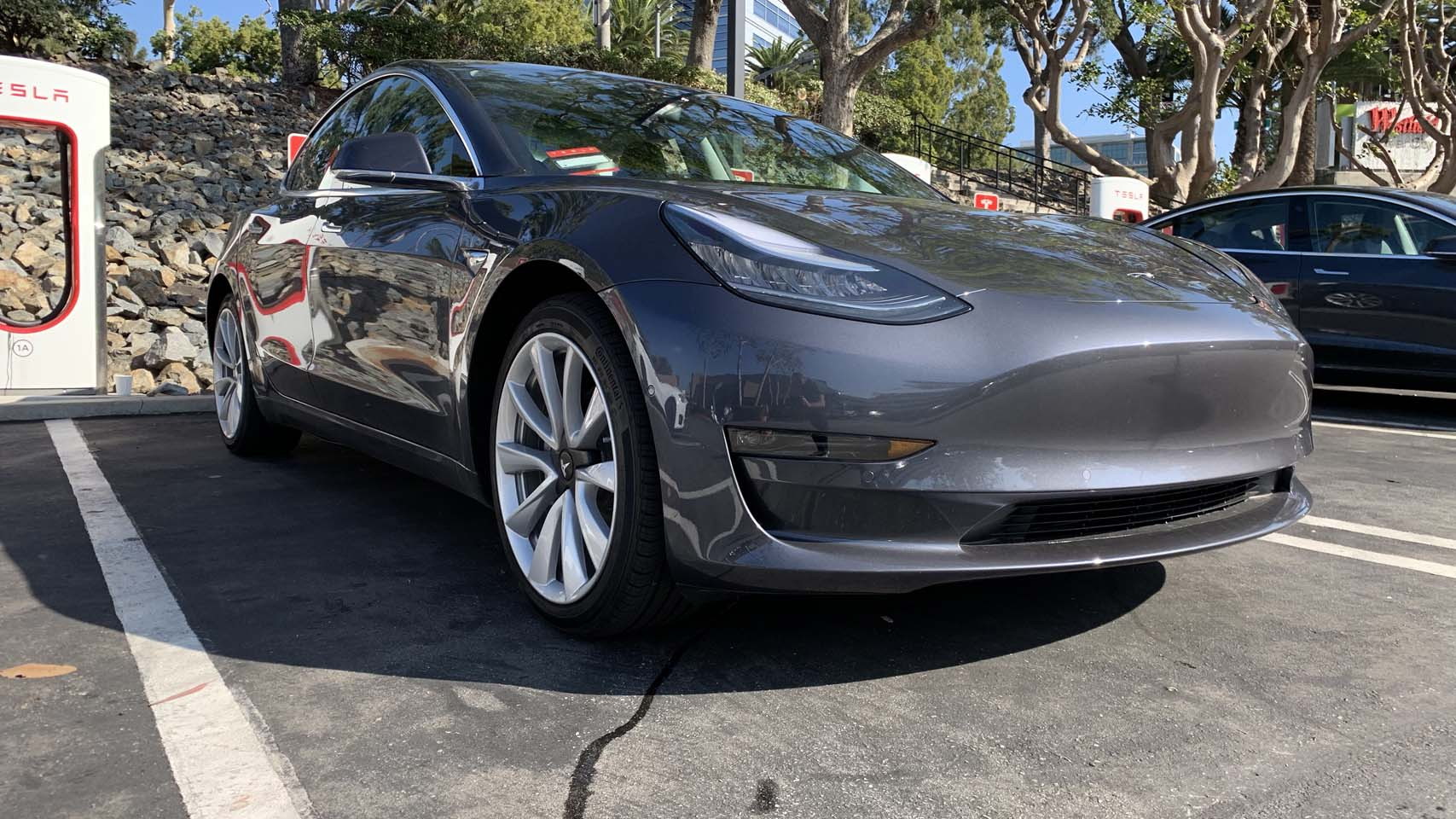 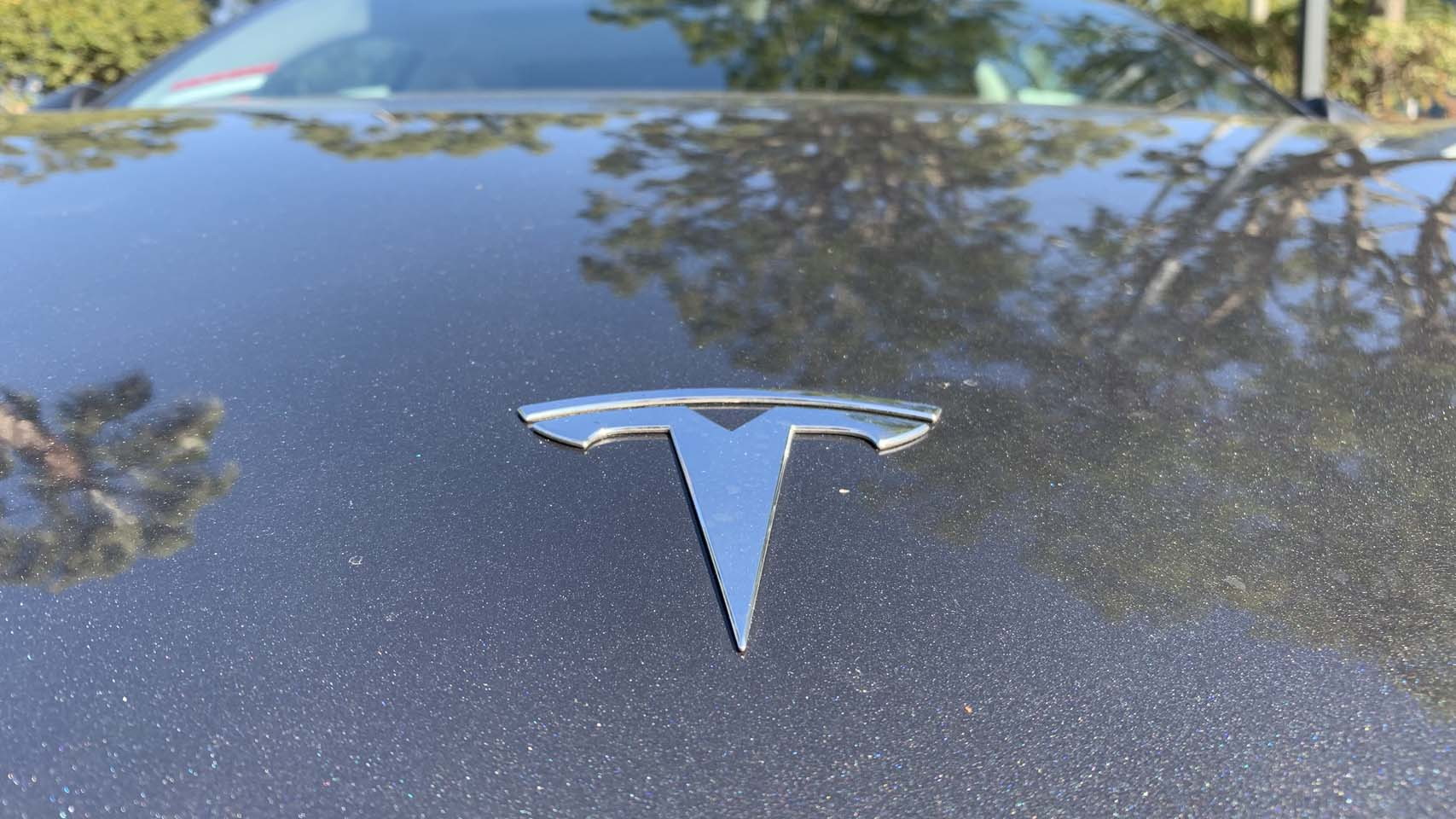 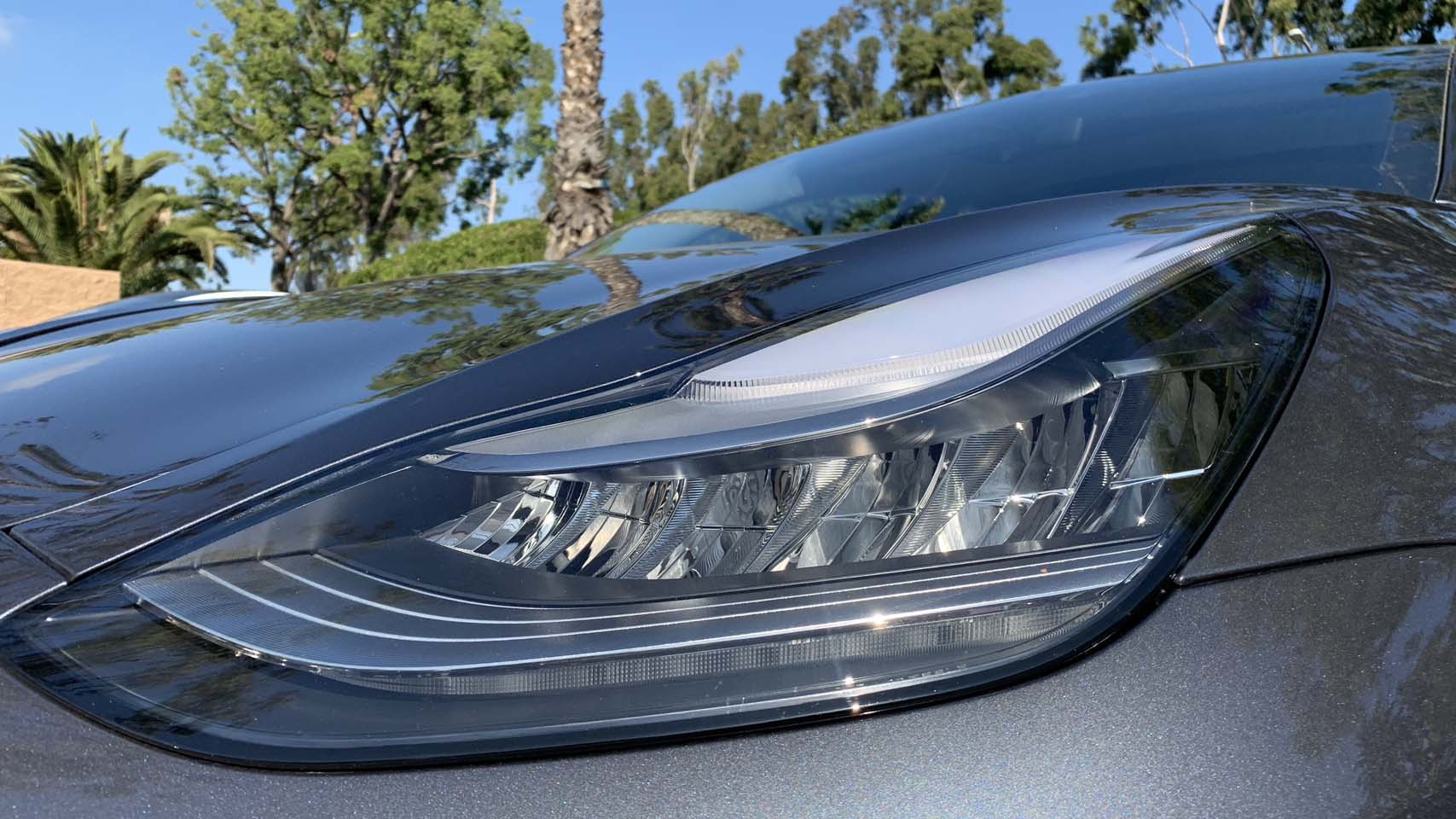 It’s not a hypercar, supercar, or even a sports car, and yet it’s one of the most hyped vehicles of the last decade.

The Tesla Model 3 needs no introduction.

The linchpin in Tesla’s Master Plan, the Model 3 is supposed to be an affordable, high-volume electric car. It’s not, but it’s the future. 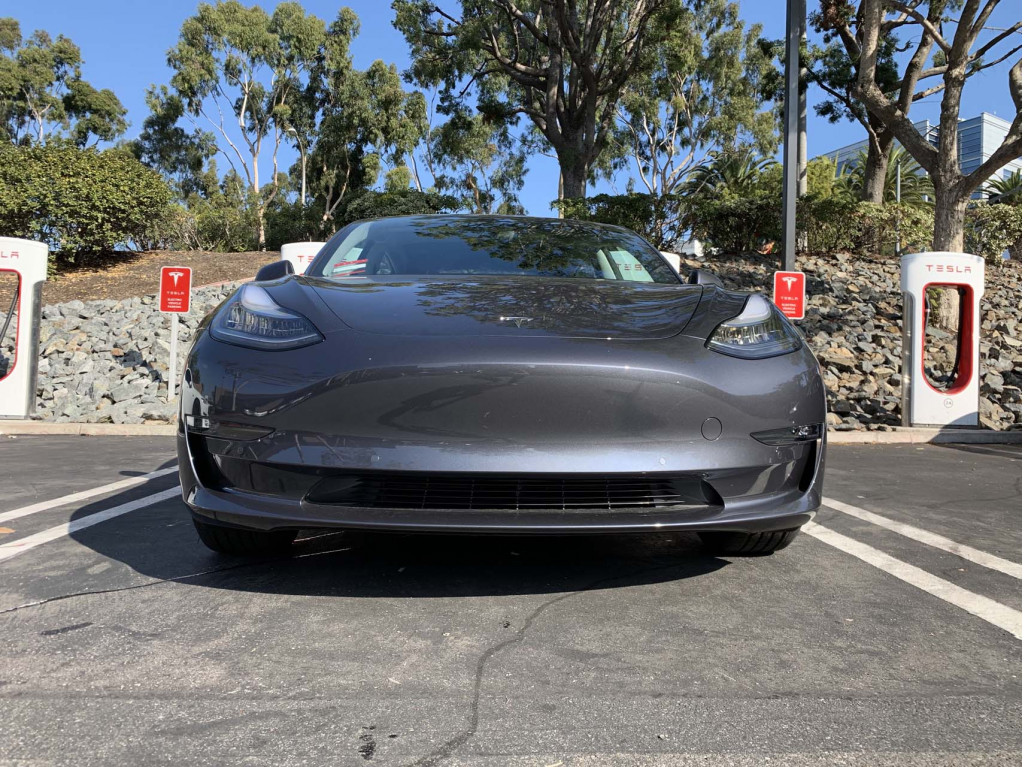 The flagship Model S is a truly a gorgeous car, but the Model 3 isn’t.

Step back and absorb the Model 3’s design. The rear three-quarter view is the compact car’s best angle, with a design that’s related to the larger, prettier Model S. The strong rear haunches flow into the stubby rear end, but the front, has sort of a fish face. It’s not ugly, or offensive, but it’s not pretty.

Open the door and the Model 3’s interior is spartan. The flat, thin, horizontal dashboard features a tablet-like 15-inch touchscreen, a steering wheel with two roller knobs, a turn signal stalk, and drive mode selector stalk. The interior is a shock; is it simple or just stark?

Every control for the Model 3 from the windshield wipers and headlights to the sideview mirror adjustments is controlled via the massive touchscreen, for better and worse. 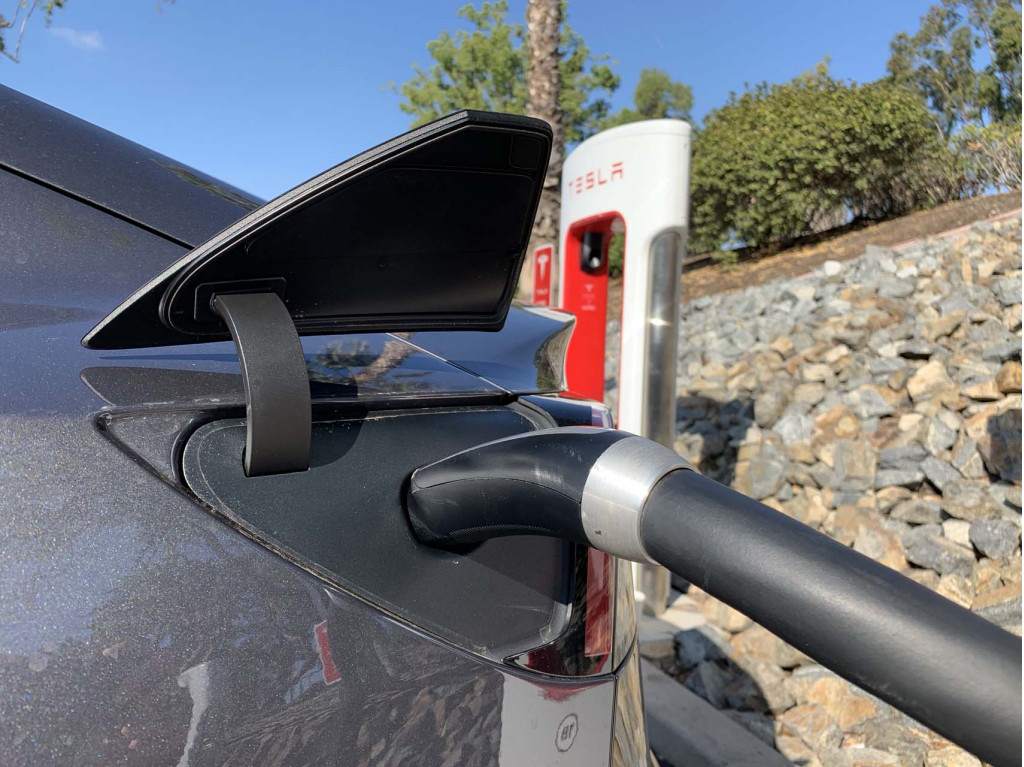 Mid or Long, but no Standard

Base Mid-Range rear-wheel drive models have 258 horsepower and 284 pound-feet of torque while the Long-Range all-wheel drive model ups those figures to 346 hp and 376 lb-ft of torque. Buyers who opt for the Performance model will have 450 hp and 471 lb-ft of instant torque at hand.

In both of my recent experiences with the Model 3 its battery management software was more consistent and efficient than that of the new Jaguar I-Pace. Its state of charge and remaining range did not change erratically and seemed in-line with the miles driven, a feat the I-Pace has consistent trouble with. 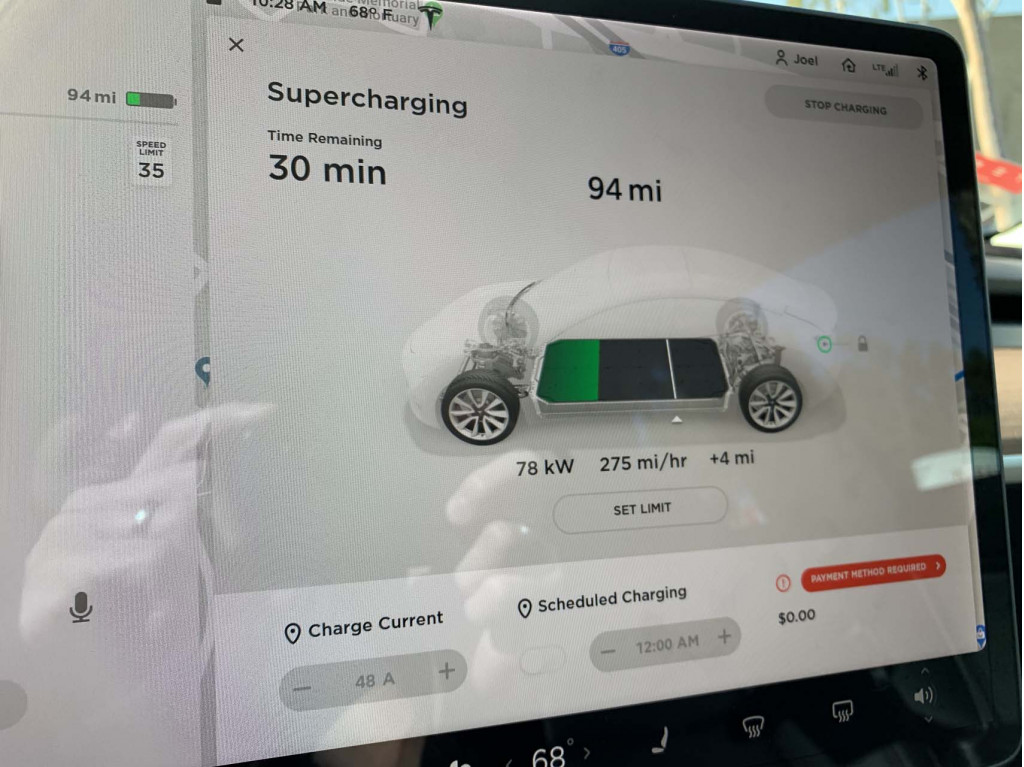 At a 120-kw Supercharger station I charged the Model 3 and added 90 miles of range in 30 minutes at an average charge rate of 65 kw. I saw a peak charge of 78 kw but was sharing the juice at the Supercharger station in Culver City, California, at a mall with eight other Teslas. The cost was $6. 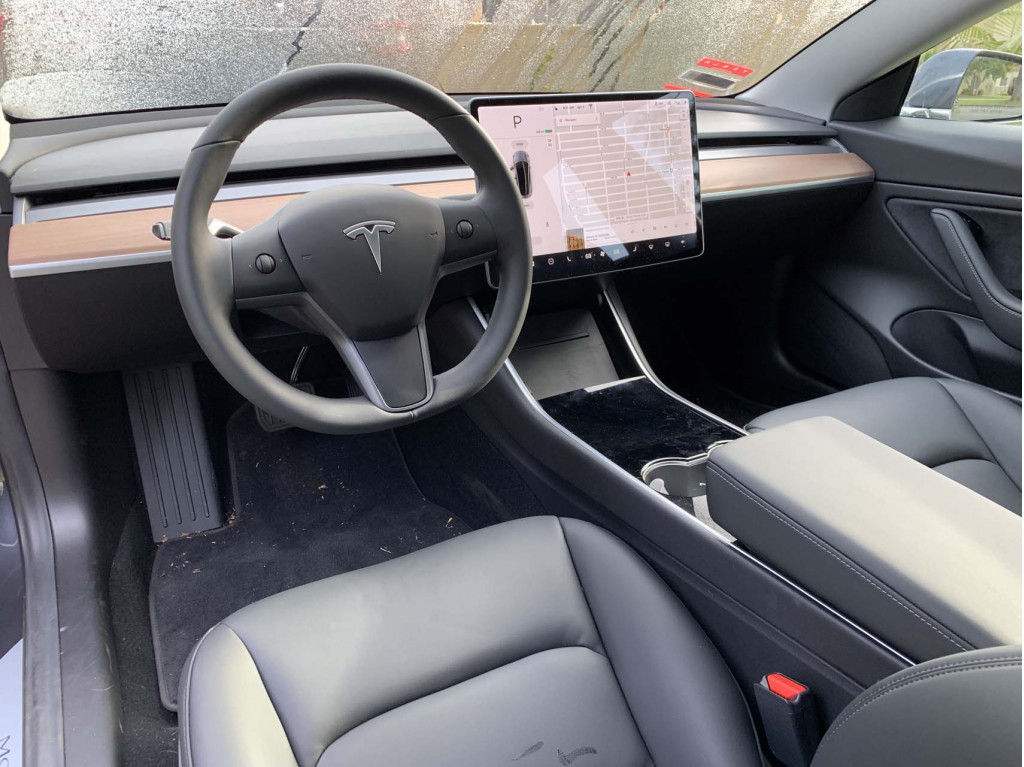 Walk up to the Model 3 with a smartphone paired to the Tesla app and the car and it automatically unlocks, with the mirrors unfolding as a greeting. Push in on the flush-mounted door handle to pop it out and open the frameless door. No key, no fuss.

Those that don’t have a smartphone paired with the app and the car can use a plastic key card to unlock the Model 3 with a simple tap of the driver-side B-pillar. The Model 3 starts by tapping the key card on the center console ahead of the armrest.

While the seat adjustments are located on the side, like most cars, the steering wheel and sideview mirror adjustments require navigating to a menu on the touchscreen and then using the two scroll wheels on the steering wheel. It’s an interesting way to eradicate hard buttons that aren’t used frequently.

Owners, and random drivers, can create a profile in the car that saves all their settings. Most cars can do this, but the Model 3 goes further. It saves every setting and preference in the car, from radio stations and previous navigation destinations to sound settings, lighting and drivetrain preferences. It’s slick, and it’s what a modern car should be able to do.

The 15-inch touchscreen’s interface is easy to navigate and the entire menu system feels like something Apple designed for the iPhone. Menus aren’t buried or hidden and there are no fiddly knobs. It recognized multiple finger inputs at one time, and the processor kept up with fluid movements for pinch-to-zoom functions on the map. This is how a modern vehicle’s infotainment system should function.

While stationary, the layout seems perfect. In practice, it’s close but not quite.

With the seat and steering wheel adjusted correctly, I closed my eyes and cleared my mind. The way I fit into the seat, the way the bolsters hugged my ribs, and the way my arms fell to the steering wheel, I swore it could’ve been an early 2000s 3-Series (E46). I opened my eyes and it wasn’t. It was a Tesla.

I slid the Model 3’s wing-like column-mounted drive selector into drive and pulled onto the street. The power was instant. Electric cars and their instant torque is a helluva drug.

As the Model 3 lunged forward, I’m pushed back into the driver seat without drama. Despite the rapid acceleration, the tires were silently confident, not even a chirp from the optional 19-inch 235/40 Continental ProContact tires. There wasn’t even a whir from the electric motors, just the minimal rush of air as it flowed around the mirrors as speed built. 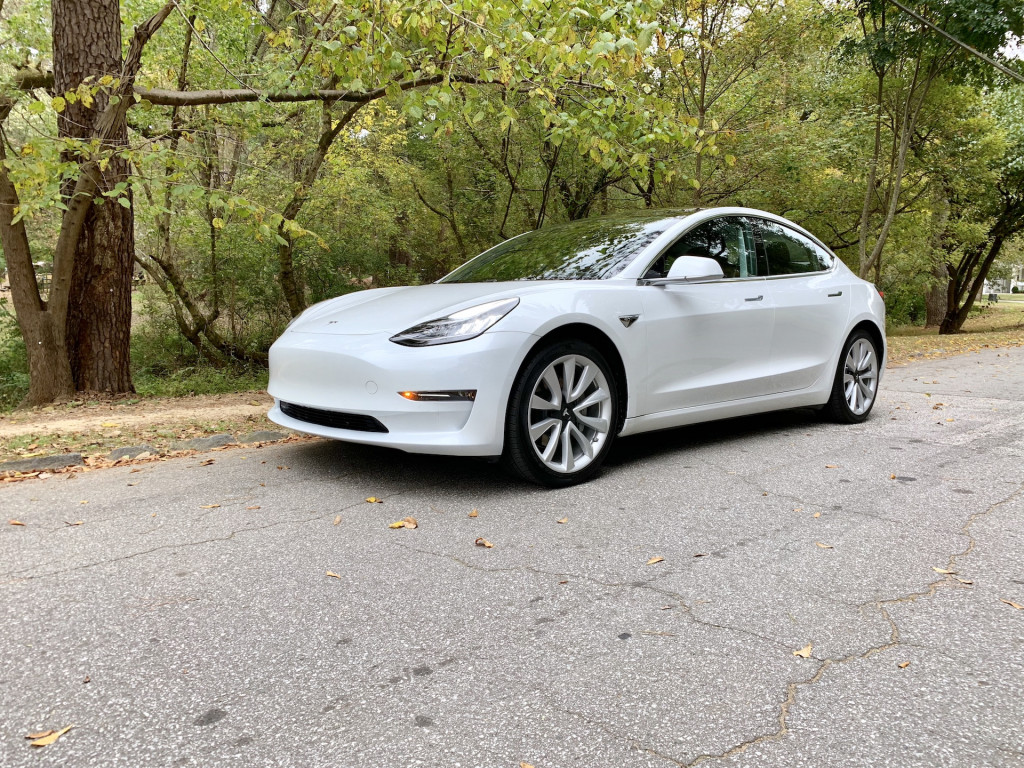 The steering doesn’t have a bunch of modes or gimmicks, it’s nicely weighted with a good on-center feel. It communicated what was going on at the wheels far better than a lot of modern cars, but it wasn’t as telepathic as Porsche’s electric power steering setup in a 911.

For the first few minutes it was weird not having a gauge cluster directly in front of me; rather the speedometer is offset to the top left of the 15-inch screen, which means it’s to the right of me. After about 10 minutes on the road the entire setup felt normal, though a head-up display would be welcomed. Nearly all vehicle functions being controlled via the touchscreen is fine in most situations, but going to a particular page on the screen and then tapping a virtual button to turn on the windshield wipers at the beginning of a downpour isn’t ideal.

Forward vision was terrific with a low dashboard, front cowl, and hood, but there’s a large blind spot created by the upward sweeping beltline and thick C-pillar. 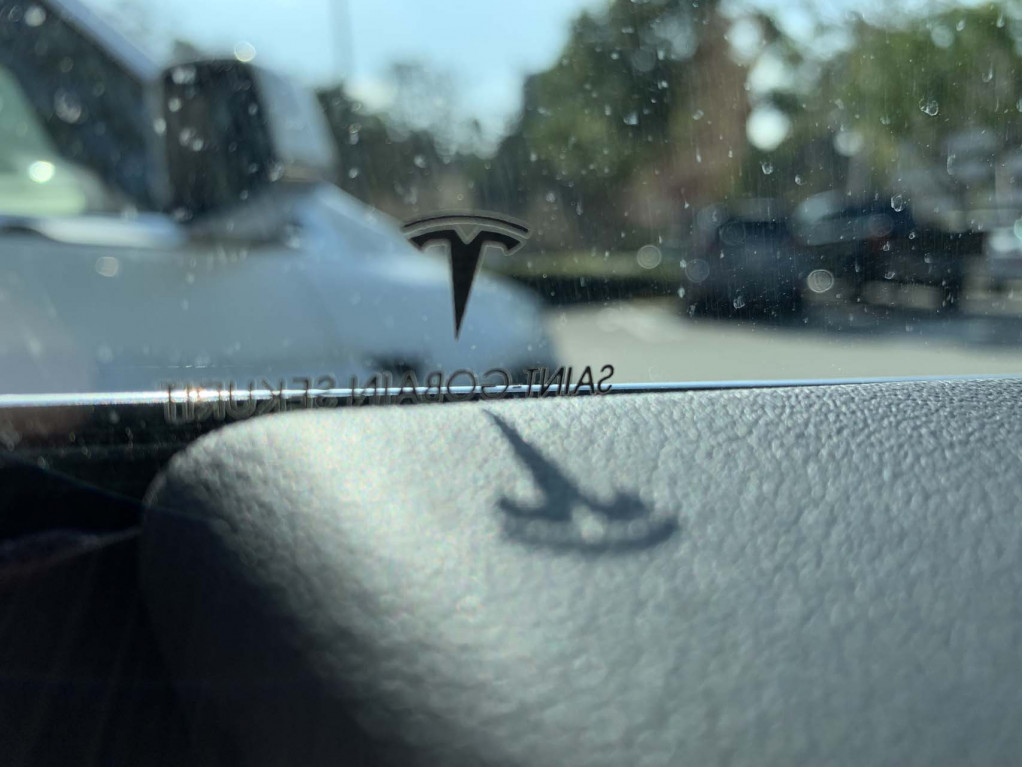 The Model 3 is a good car. It’s well-designed, seems well-engineered, and its dynamics can satisfy both enthusiasts and those just in need of an efficient, all-electric daily driver.

But to date, its build quality has been mixed at best. Both the cars I recently tested were mostly well-built, but the long-range all-wheel-drive model (which was a recent build) had a piece of weather stripping that wasn’t properly seated and two pieces of plastic trim under the front hood that weren’t fully seated from the factory. Both were fixed in 10 seconds by me, but the Mercedes-Benz C-Class or Audi A4 don’t have the same problems.

The Model 3 is proof that Tesla has figured out how to design and engineer a car for the masses. Now it just needs to learn how to build it consistently and scale to meet demand without sacrificing quality.

Jaguar and Audi are launching electric cars, Chevrolet’s already launched an electric car, and Volkswagen, Porsche, and Mercedes-Benz are all coming. The first crop, the Chevrolet Bolt EV, Jaguar I-Pace, and Audi e-tron, all seem to be electric cars built like yesterday’s cars. The Porsche Taycan and VW’s I.D. family all show great promise, but are yet to be fully defined and detailed.

Most of the competition’s efforts remain years away. Tesla’s building the car everyone seems to be promising tomorrow, today.