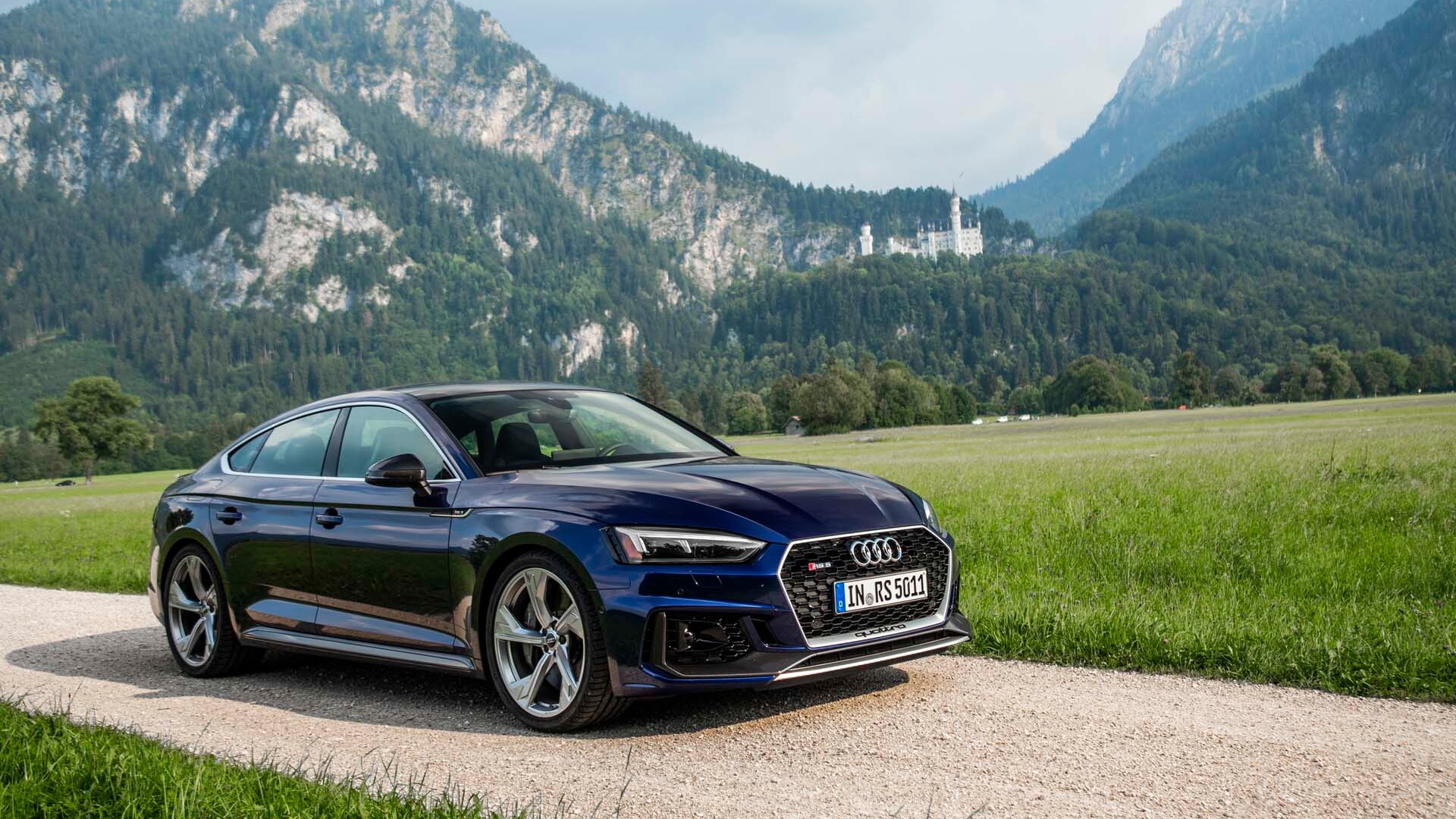 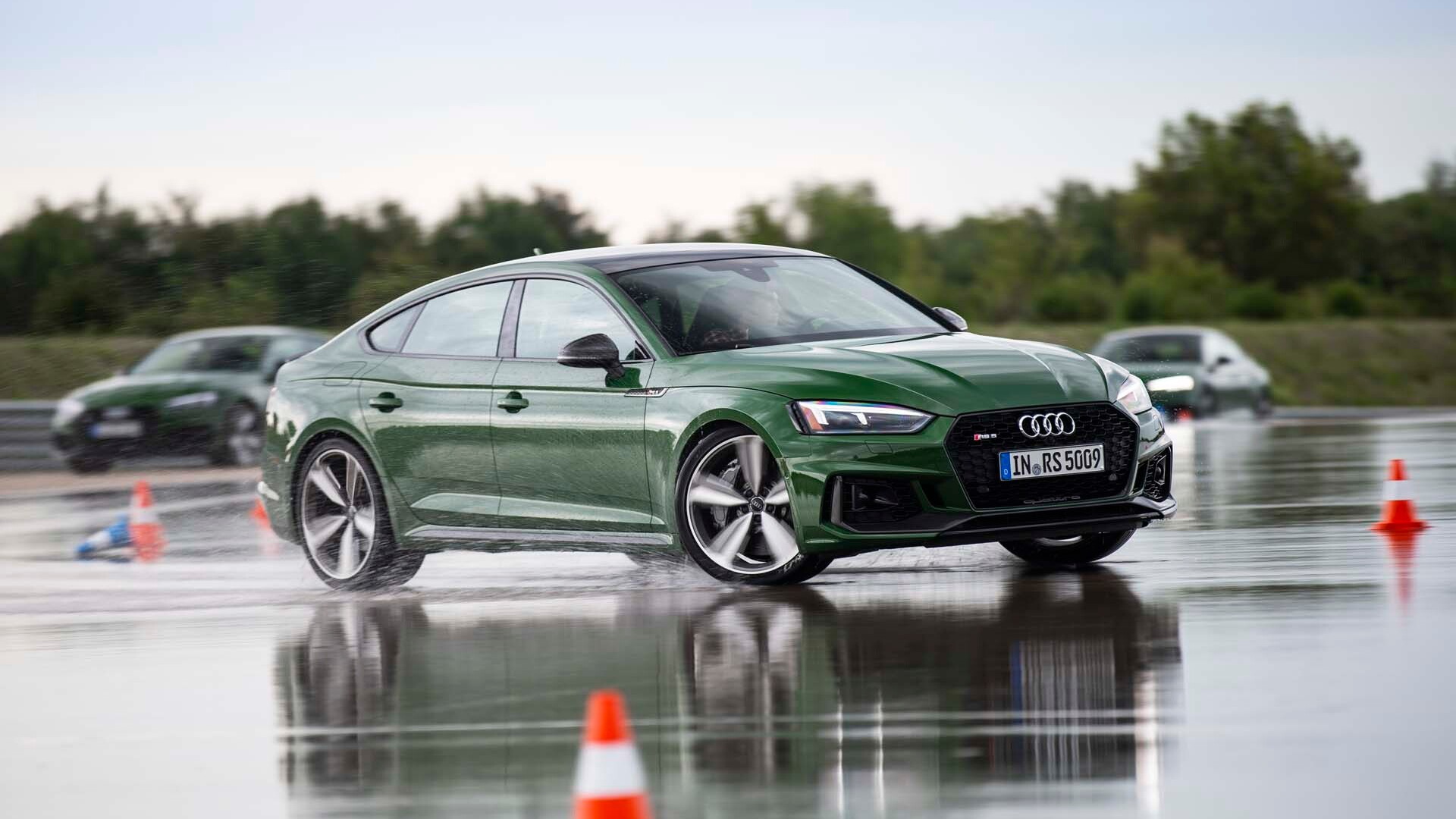 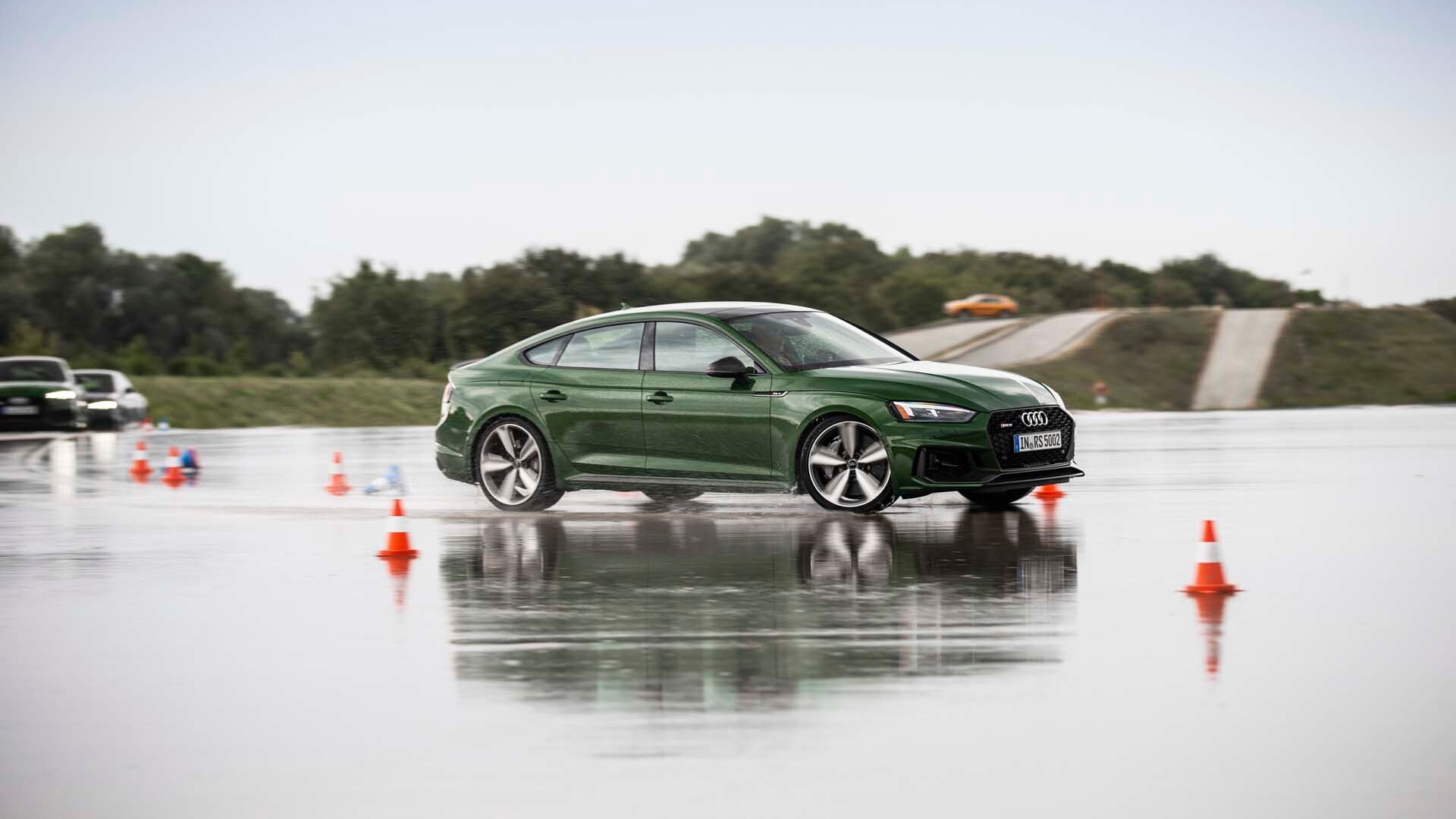 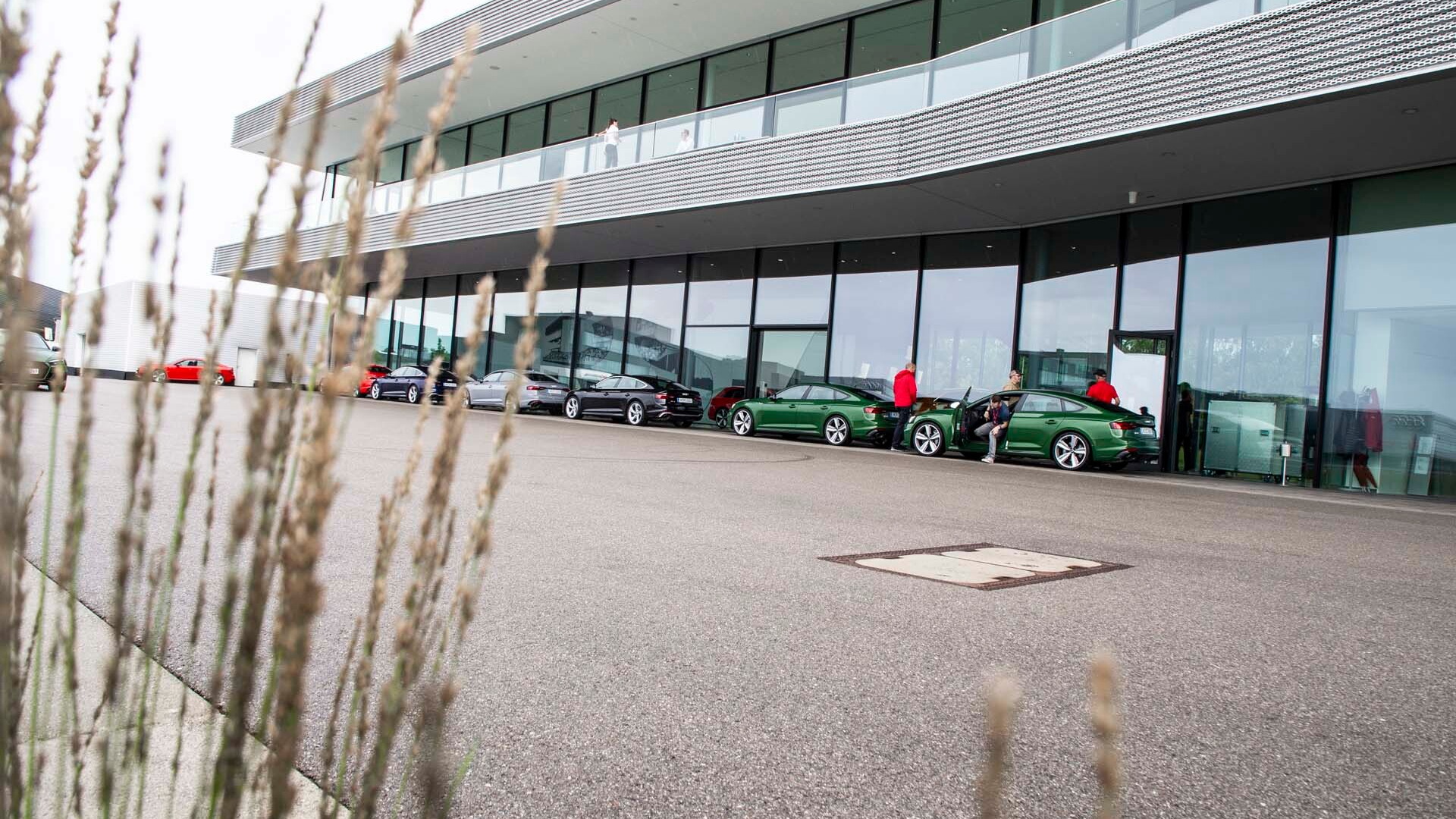 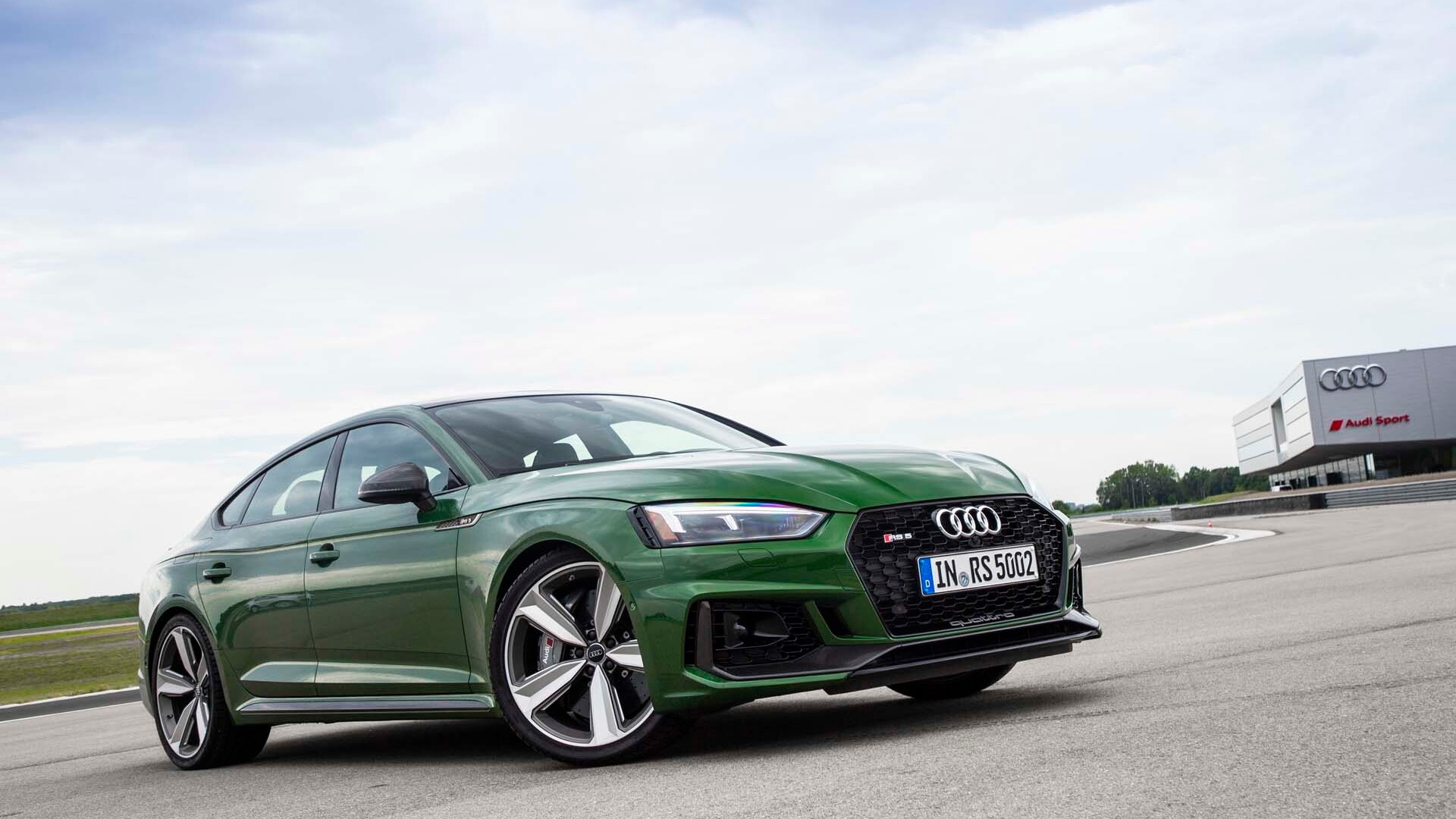 Believe what you’ve heard about the blissfully open and unfettered stretches of the Autobahn. These long, gently curving and pencil-straight stretches of German highways are the last bastion for drivers to flex their figurative muscle and courage, directly proportional to the angle of their right feet. It’s what Wyoming should be like if it really took that libertarian thing to heart.

The 2019 Audi RS 5 Sportback is a wonderful laissez-faire missile, the right car for the left lane of the Autobahn. The new RS 5 Sportback is virtually identical to the RS 5 coupe already on sale, but with a better shape befitting its power and mission. There’s no escaping its nose-heavy construction, nor its all-wheel-drive grip. The RS 5 isn’t silly or dangerously sharp. It’s just the best four-door to drive fast for less than $100,000.

The Autobahn convinced me.

Brawn for a beauty

Traveling at 164.6 mph, inspiration is largely unwelcome. So is talking. Or loud thinking. Any activity other than guesstimating the closing speed on that yellow speck of a hatchback miles ahead is unwelcome.

Good thing that the RS 5 is unfazed. Its carbon ceramic front brakes and firm steering add confidence when it’s needed, like when that yellow speck draws close enough that I can hear my heart beat louder than the wind buffeting on the windows.

I’d love to tell you about the rolling hills outside Munich, painted with forest-green shades rich enough to taste but I’m haul-assing at triple-digit speeds and less attentive to the countryside than a toddler after a can of Coke. Shrubbery can wait for another day.

Blame the intoxicating 2.9-liter turbocharged V-6 for that distraction. Like the coupe, the RS 5 Sportback’s 444 horsepower and 443 pound-feet of torque is unhinged, even if the intake sounds are strained inside the cabin.

Outside the car would be the RS 5 Sportback’s best vantage point—its elegant curves and lusty exhaust rumble on full display—if only you could drive it from the sidewalk.

I’ll take the driver’s seat for now. Like the RS 5 coupe (and the S5), the busy 2.9-liter V-6 forces compressed air into one bank of cylinders before the other to minimize turbo lag and maximize insanity. At more than 150 mph there’s still more sound and pedal left to explore. Ask me how I know.

The RS 5 Sportback’s two additional doors add just over 85 pounds to the overall mass and a fraction of a second to its 0-60 mph time, compared to the RS 5 coupe. The Sportback takes just 3.8 seconds to speed up to 60 mph and chews through the rest of its speedometer nearly as fast, all the way to a top speed of 174 mph.

Normally, the RS 5 sends 60 percent of its power to the rear wheels—one of the few times the words “normal” and “RS 5” will ever appear together. Toggle the drive select mode to Dynamic and the power prefers the rear wheels up to 85 percent. It’s enough to induce hillbilly oversteer on a wet handling course, or enough to launch my lunch into the rear seat from behind the wheel on a slalom course thanks to a completely defeatable traction control setting unique to the RS 5.

Like the coupe, the only way the RS 5 Sportback handles that kind of power is through a brilliantly sentient ZF 8-speed automatic so aware it should vote in the next general election.

There’s no escaping that 60 percent of the car’s mass is planted in its nose, no amount of torque shifting, or all-wheel-drive frippery can hide 13.7 billion years of physical law. But a dancing chassis has a way of mitigating that heft well enough, throwing the RS 5 around corners with a sport-tuned rear differential that claws for grip through 275/30R Hankook summer tires wrapped around 19- or 20-inch wheels.

The RS 5 sits 7 millimeters lower to the ground than the S5 and its adjustable dampers shuttle between gentle Comfort and teeth-rattling Dynamic modes with Automatic in between. (Auto is a middle ground between the two, according to Audi, and won’t adjust the damper settings on the fly.)

The variable steering ratio locks in place at 13.5:1 in Dynamic mode, quick enough to hustle the RS 5 around a handling course but not fast enough to give me the feeling that the RS 5 isn’t best outside of a track.

That’s because the RS 5 Sportback largely skips the pretense of a sports car and heads straight for grand-tourer, where it’s a better fit at $74,200 to start.

Unlike the coupe’s impractical two-door shape, the Sportback carries four people in comfort with more than 20 cubic feet of cargo space under the rear glass. There’s no penalty for practicality, and I’d argue the Sportback’s profile is better looking than the coupe’s.

Four doors are also a mental mindset. Unlike the BMW M4 and Mercedes-Benz AMG C63, the RS 5 feels like less of a track weapon. That’s due mostly to its heavy nose and ever-present all-wheel drive. Whereas the Merc loves to get loose and chew through tires and the BMW oozes antiseptic speed, the RS 5 is more civilized and comfortable. Double down with four doors and the RS 5 Sportback is living its best life.

On days when it’s not going 164.6 mph on the Autobahn, it’s an instantly convenient car with room enough for the in-laws you like. Audi makes a more convincing argument for comfort in its soft leather, acres of digital displays for infotainment and instrumentation, and quiet cabin than it does for speed—and the speed argument is face-meltingly compelling.

Calling the RS 5 Sportback just a sports car belies the progress that the car makes. Although it blats a beautiful tune into the air, it’s a better marker for how quickly American tastes are evolving.

The RS 5 Sportback is the first Audi to come to America before it ships anywhere else. The U.S. is the second-largest market for Audi’s performance brand behind China, and it shows. Audi Sport has plans for high-powered SUVs and hatchbacks soon, and even though we’ll never see a wagon, boss Michael-Julius Renz says he’s listening to buyers in the States.

Although the RS 5 can’t legally touch its top speed on public roads in the U.S.—what are you going to do about that, Wyoming?—it hardly matters. Its luxury and comfort are superlative among its peers. Stop thinking about just performance numbers.

But on the small chance there’s an RS 5 Sportback waiting on a road with no speed limits, it's even better at speeds faster than 150 mph.

Believe me when I tell you that. You won’t want to think about much else anyway.