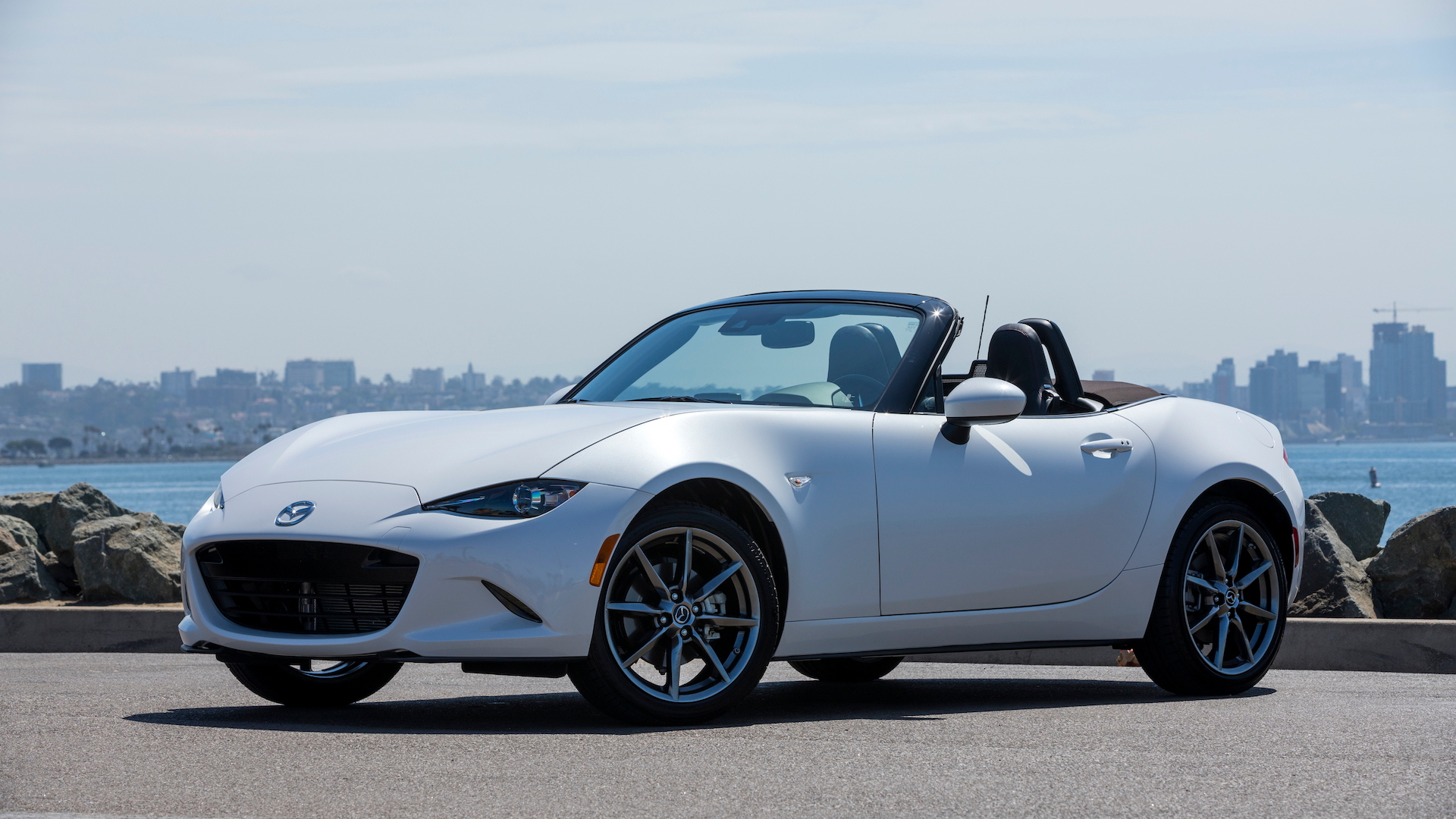 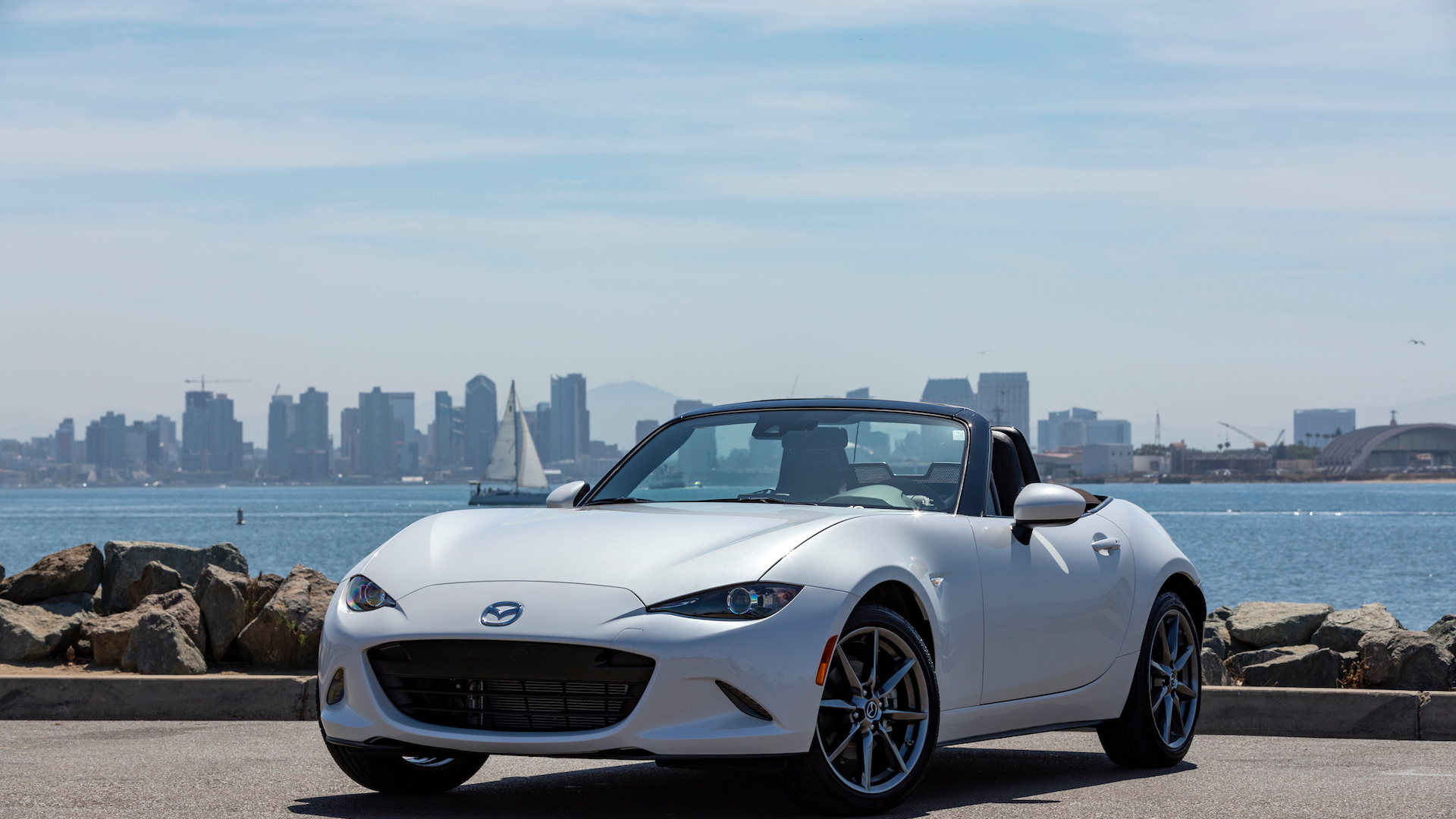 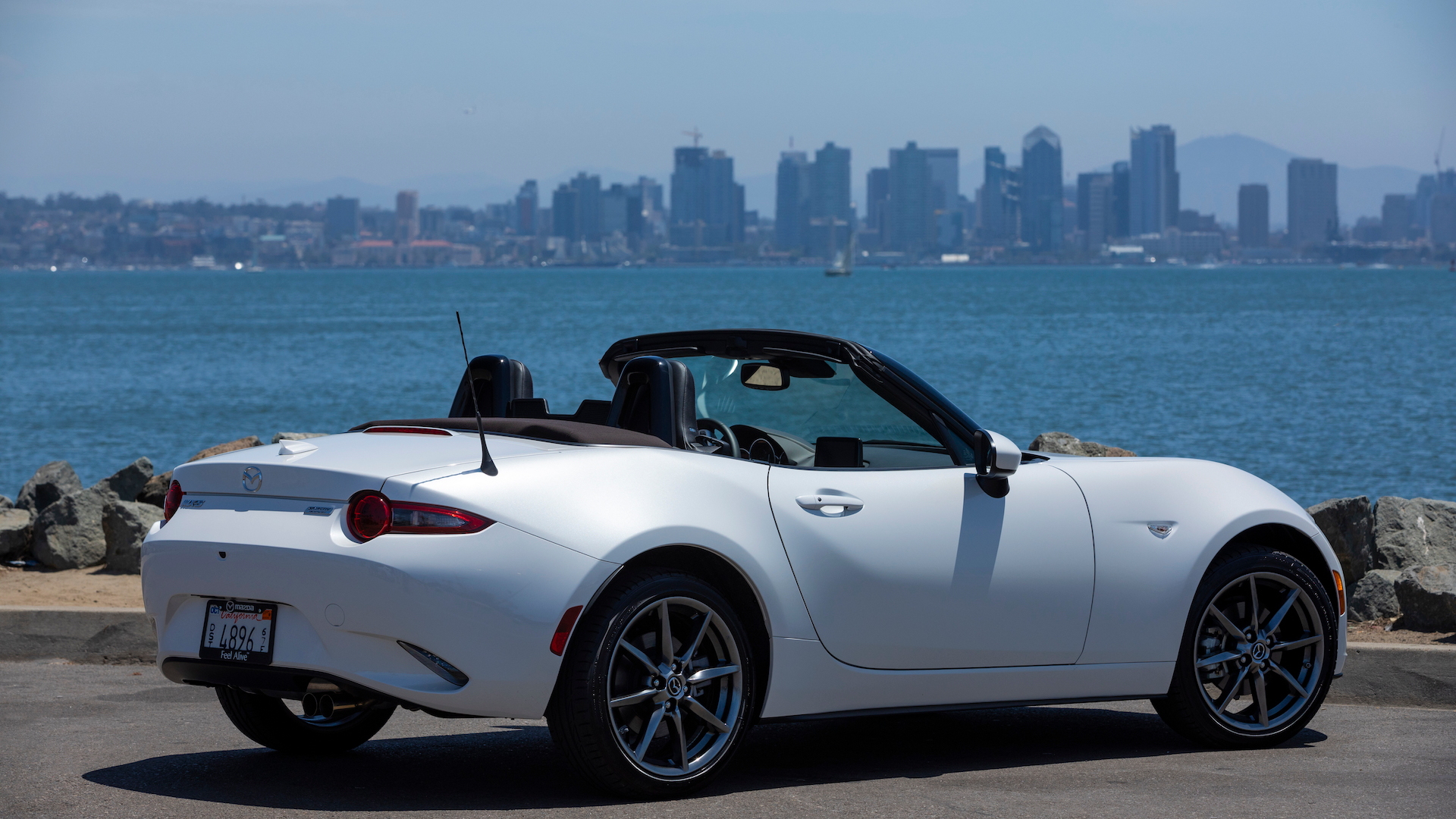 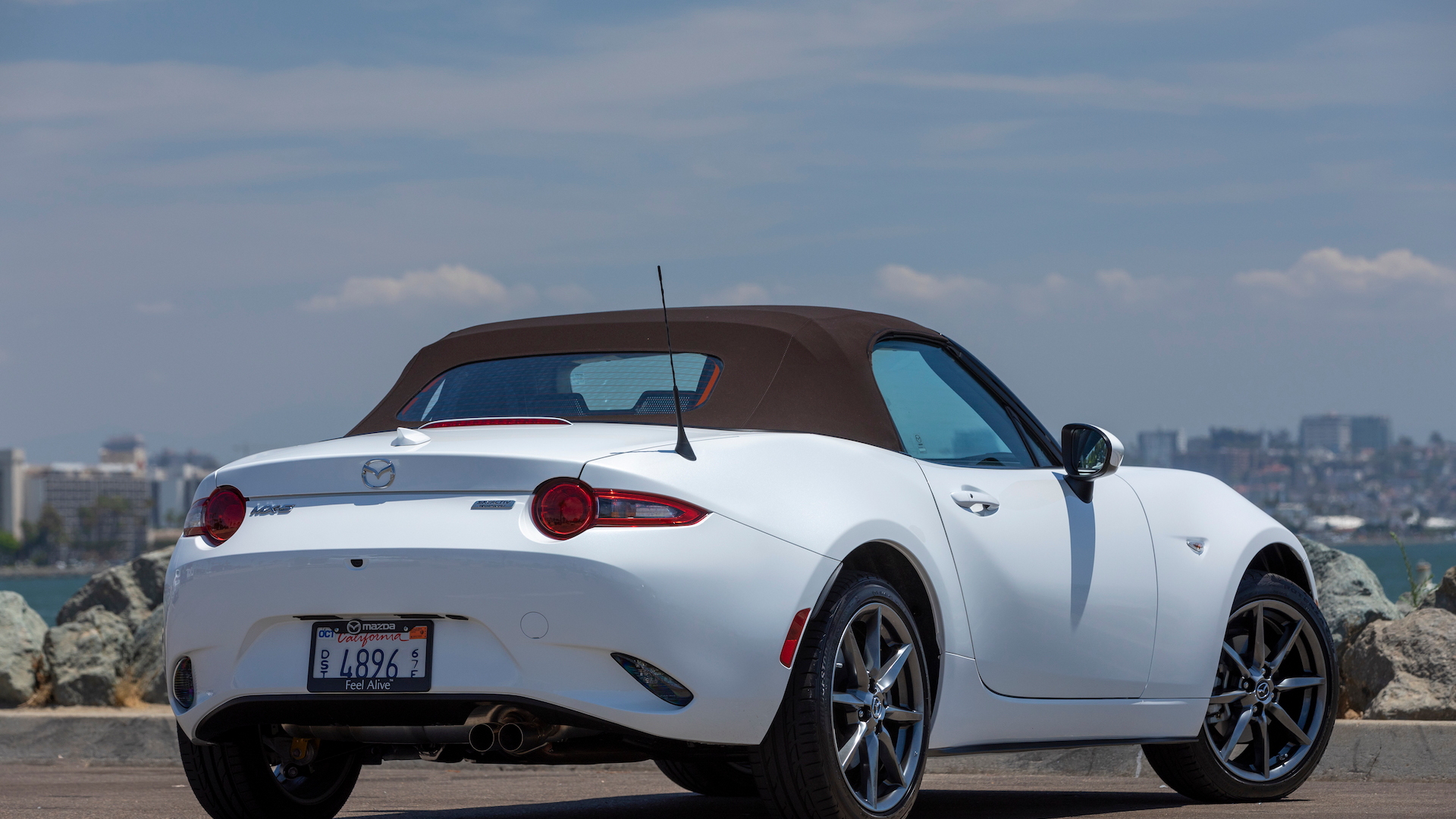 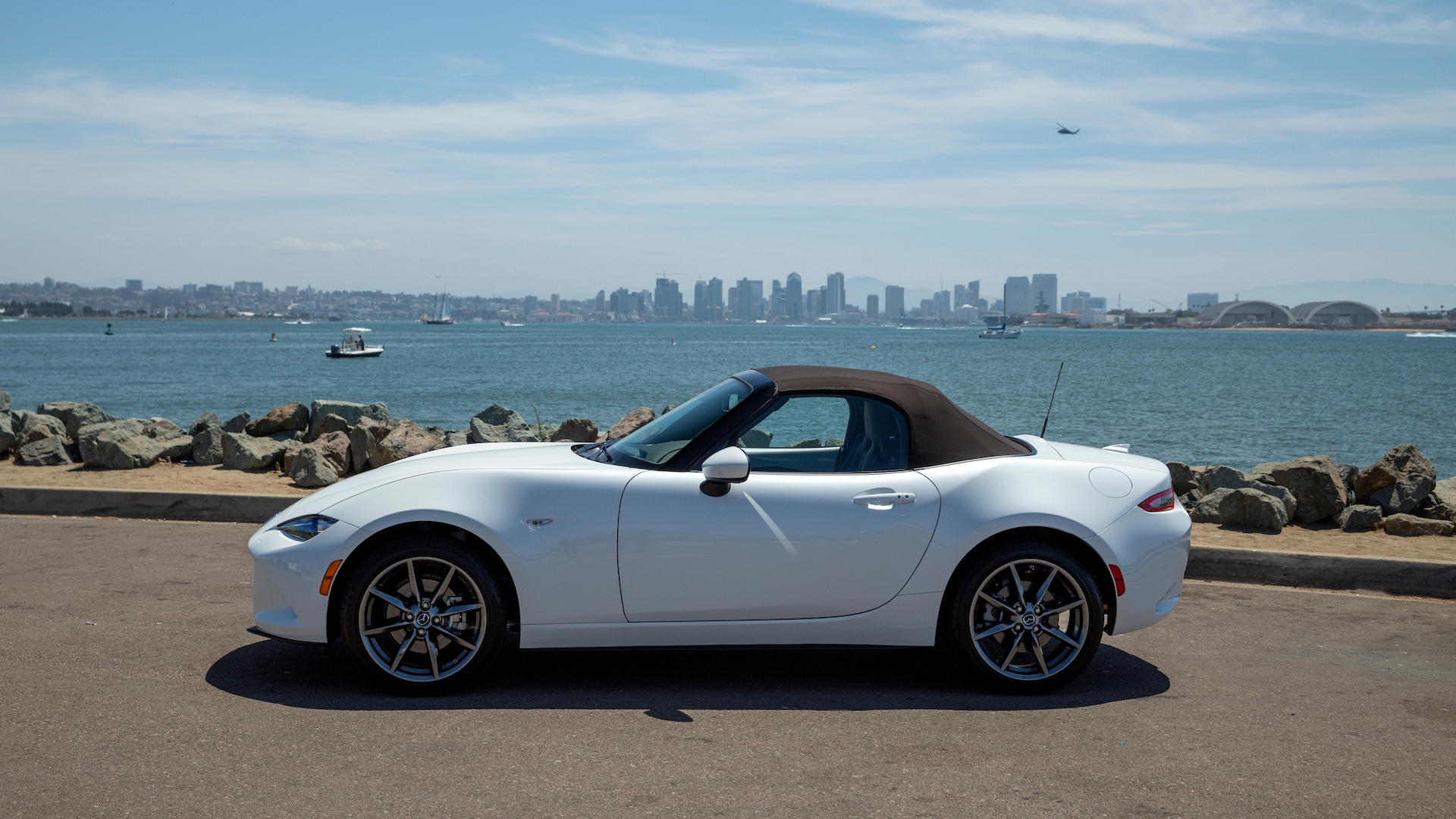 The new Mazda MX-5 Miata we got in the U.S. in 2016 wasn’t really the car it was supposed to be. According to Mazda North American Operations manager of vehicle dynamics Dave Coleman, Mazda wanted to use a 1.5-liter 4-cylinder engine worldwide.

Pushback from the U.S. allowed installation of Mazda’s 155-horsepower 2.0-liter SkyActiv-G 4-cylinder instead, for a useful power bump over the 129-horsepower 1.5-liter used in other countries. But that 2.0-liter engine was little more than a transplanted version of the engine used in the company’s economy models and it had some shortcomings in sports car duty.

The aim for the updated 2019 Miata was to give the roadster a proper version of the 2.0, and Mazda has succeeded, even if this new engine falls unexpectedly short of some of Mazda’s claims for it.

A question of revs

The off-the-shelf SkyActiv-G 2.0-liter engine installed in the 2016-'18 ND Miata was optimized for efficiency, and spun to a maximum of 6,800 rpm before hitting the rev limiter’s fuel cutoff. The 1.5-liter engine was tuned properly for a sports car, revving to 7,500 rpm, so despite its lesser power output, it produced the kind of excitement drivers expect from the MX-5.

It was also a cause for concern among buyers and some within Mazda that, at 155 horsepower, the 2.0-liter engine was rated lower than the 167-horsepower 2.0-liter engine in the previous-generation car, the so-called NC.

Spinning the engine faster also called for lighter pistons and connecting rods, with a strengthened crankshaft. “The pistons in this engine are works of art,” enthused Coleman. “I didn’t think there was any way possible to take weight of out (the previous pistons), but we did it,” he crowed. Mazda trimmed 27 grams from each piston to help the engine rev more freely.

The direct fuel injection now fires as many as three distinct injections at lower rpm, up from the previous two, and those squirts of gas are at higher pressure for improved atomization of the fuel.

All of these changes improve both efficiency and power. The 2.0 in the 2019 Miata produces 181 hp and 151 pound-feet of torque, gains of 26 and 3, respectively. Even though the ND2 is more powerful, its EPA highway fuel economy rating with the manual transmission improves by 1 mpg to 34 mpg, while the city and combined numbers are unchanged at 26 mpg and 29 mpg, respectively.

The automatic transmission car employs a lower final-drive ratio for quicker acceleration, but the efficiency gains let the EPA rating hold steady for that car at 26 city, 35 highway, 29 mpg combined.

In response to concerns about annoying gear rattle sounds from the old engine, the ND2’s engine uses a dual-mass flywheel that quells vibration. “Dual-mass” normally means “too much mass,” as it requires two sections connected by damping springs, but Mazda designed a light flywheel that retains the kind of rapid throttle response Miata drivers demand, according to Coleman.

Mazda used software to mitigate another issue with manual transmission cars. Programming for the throttle-by-wire system modulates the opening of the throttle plate to automatically squash any of the oscillations that are typical when accelerating from low rpm.

As a cherry on top, Mazda redesigned the Miata’s muffler. Now it sounds even better than before, and it sounded great before.

As a double-check of the ND2’s credentials, I paid a visit to San Jose, California’s Z-Car Garage, a friendly tuning and restoration shop that could put the new car to the test on its Dynajet rear-wheel dynamometer.

The ND2 Miata recorded 168 horsepower at the rear wheels, which seems about right in comparison to the 181-hp rating at the flywheel. Power peaked at 7,000 rpm right on schedule.

But then it hit a rev limiter at 7,200 rpm, not the advertised 7,500 rpm. Asked about the discrepancy, Mazda’s spokesman explained that, well, actually, the rev limit is 7,200 rpm in 5th and 6th gears, which are the gears we used in the tests.

Mazda, incidentally, uses the term redline in reference to the car’s rev limit. Normally, redline is set at about the engine’s power peak, when it is advisable to shift, with the rev limit set a little bit higher to prevent damage from over-revving while leaving some room for flexibility.

Mazda marks the Miata’s tachometer with a dashed red line starting at 7,000, right at the power peak, and with a solid red line between 7,500 and 8,000 rpm, a range the engine cannot achieve absent a mechanical overrev from an accidental downshift.

I also did a street test to see whether the car would go 60 mph in 2nd gear, and found that it tops out at 58 mph when held against the rev limiter in 2nd. The tachometer indicated 7,200 rpm at that point. That would seem to contradict Mazda’s claim that the engine can rev to 7,500 rpm in all but the top two gears.

The 0-60 mph run is an important performance benchmark, and an additional 2-3 shift adds time to the run. If the engine spun just a little faster, say, to the claimed 7,500 rpm, it would get there, and Mazda would have a speedier time to brag about.

Instead, Mazda provided no manufacturer’s estimated 0-60 mph time for the ND2 Miata, even though it had claimed the 2016 model could make the run in about 6.0 seconds. Achieving 60 mph in second gear is also important to the many Miata owners who shred orange cone-filled parking lots in timed autocross events. With the ability to reach 60 mph in 2nd gear, they can usually complete a run without ever shifting. That saves time and wins races, just like in the 0-60 drag race.

Stopwatch times don’t mean much to the rest of us, though, and the ND2 Miata is an absolute delight to drive. All of the elements come together exactly as intended.

The engine revs a bit higher than before, and sounds better doing it. It pulls flawlessly from low rpm without a hint of vibration or oscillation. The ND2 is everything sports car fans wanted from the ND1 when it debuted. The ND1 shed weight compared to the NC, and now ND2 has more power than before.

The Miata’s steering, shifter, and clutch pedal remain telepathic, and the steering wheel now stretches out to reach the driver’s hands with a new telescoping steering column, which is a concession to cries from many enthusiasts who wanted to fit in the Miata but couldn’t.

The 2019 Mazda Miata is a nearly perfect lightweight roadster and continues to be an incredible accomplishment in a world of increasingly soulless, heavyweight transportation appliances. The engine update makes a great car even better, but Mazda’s uncharacteristic obfuscation regarding the engine specifications seems entirely unnecessary.

Mazda provided travel and lodging to Internet Brands Automotive to bring you this firsthand report.