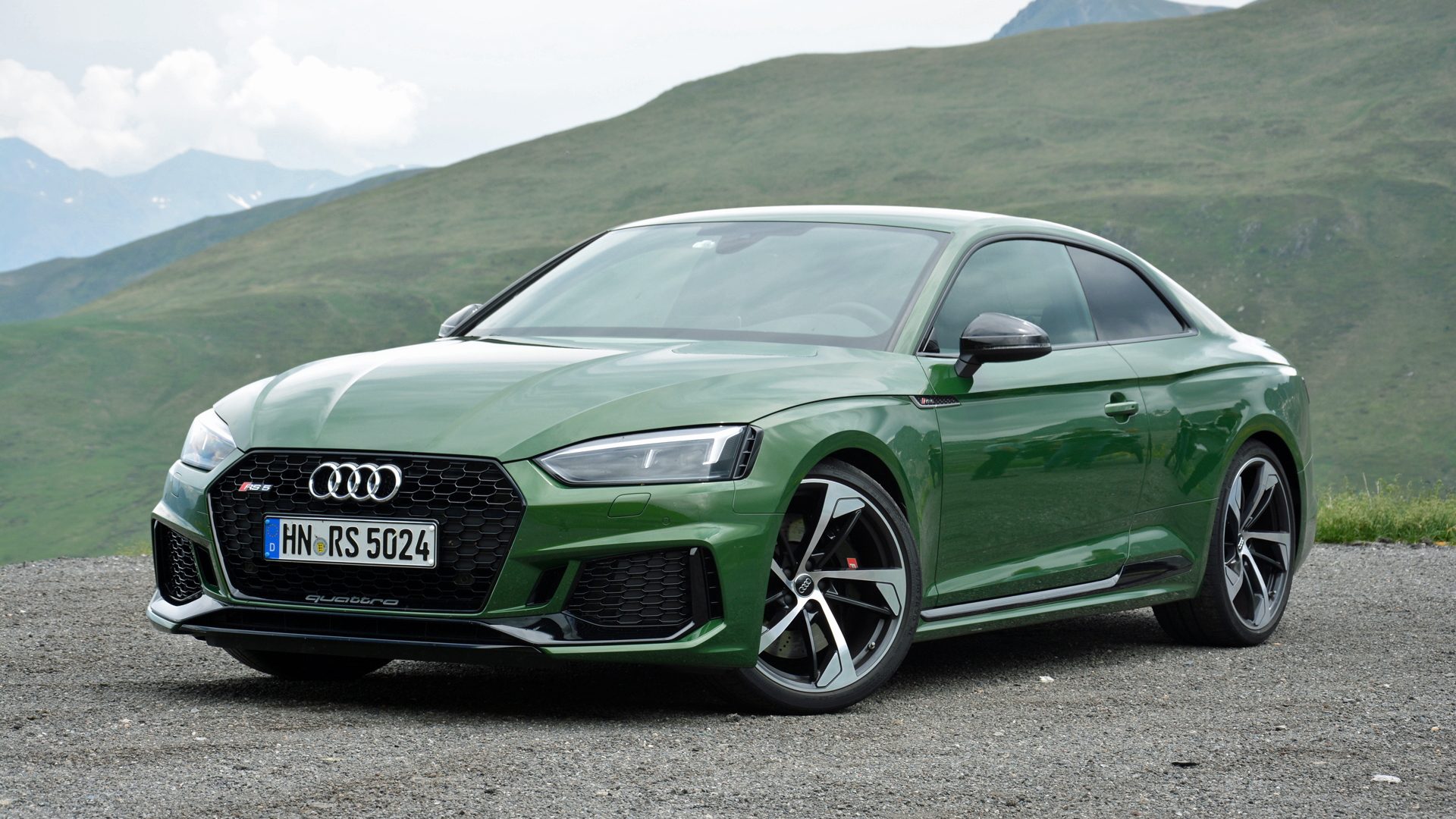 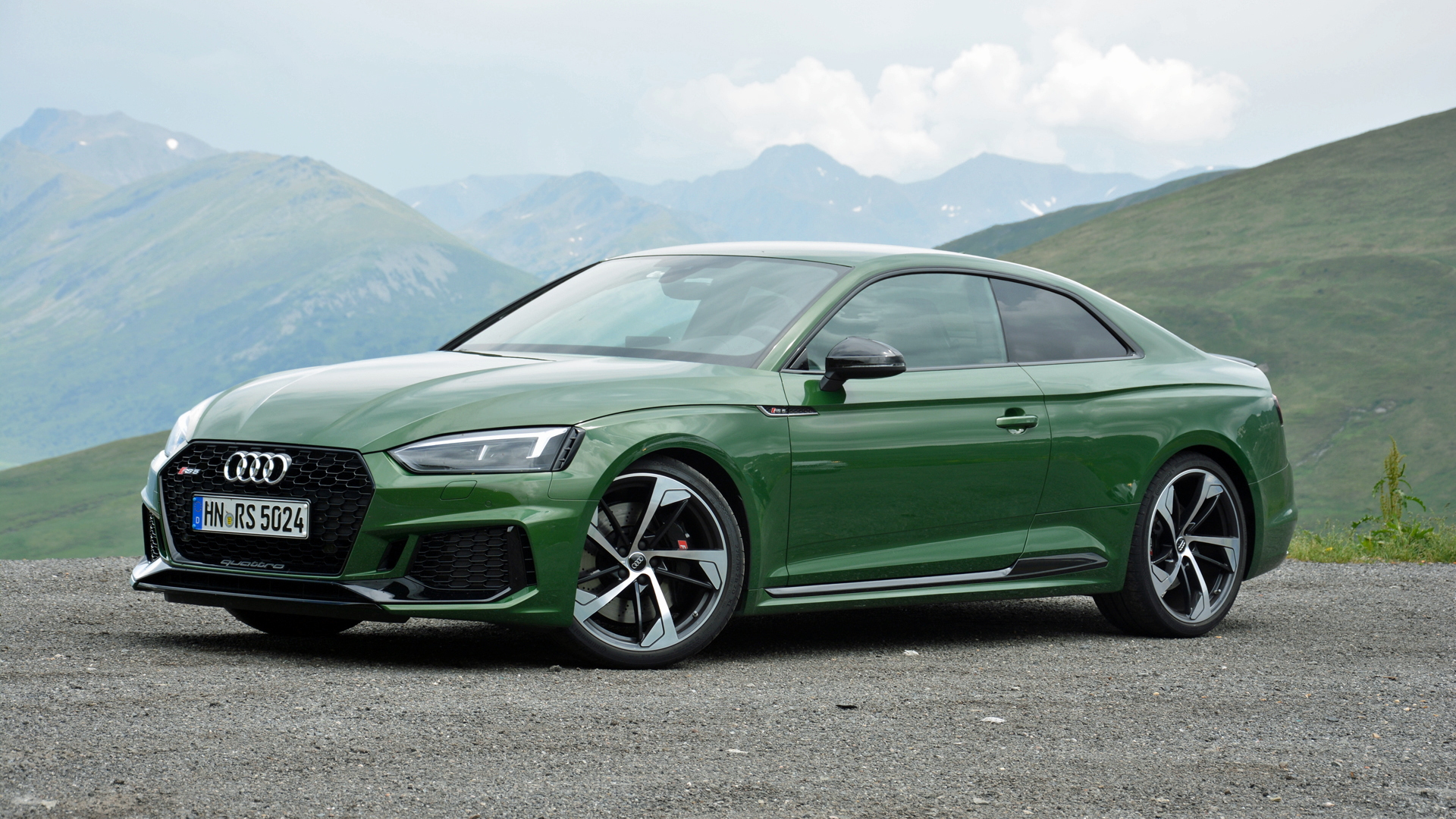 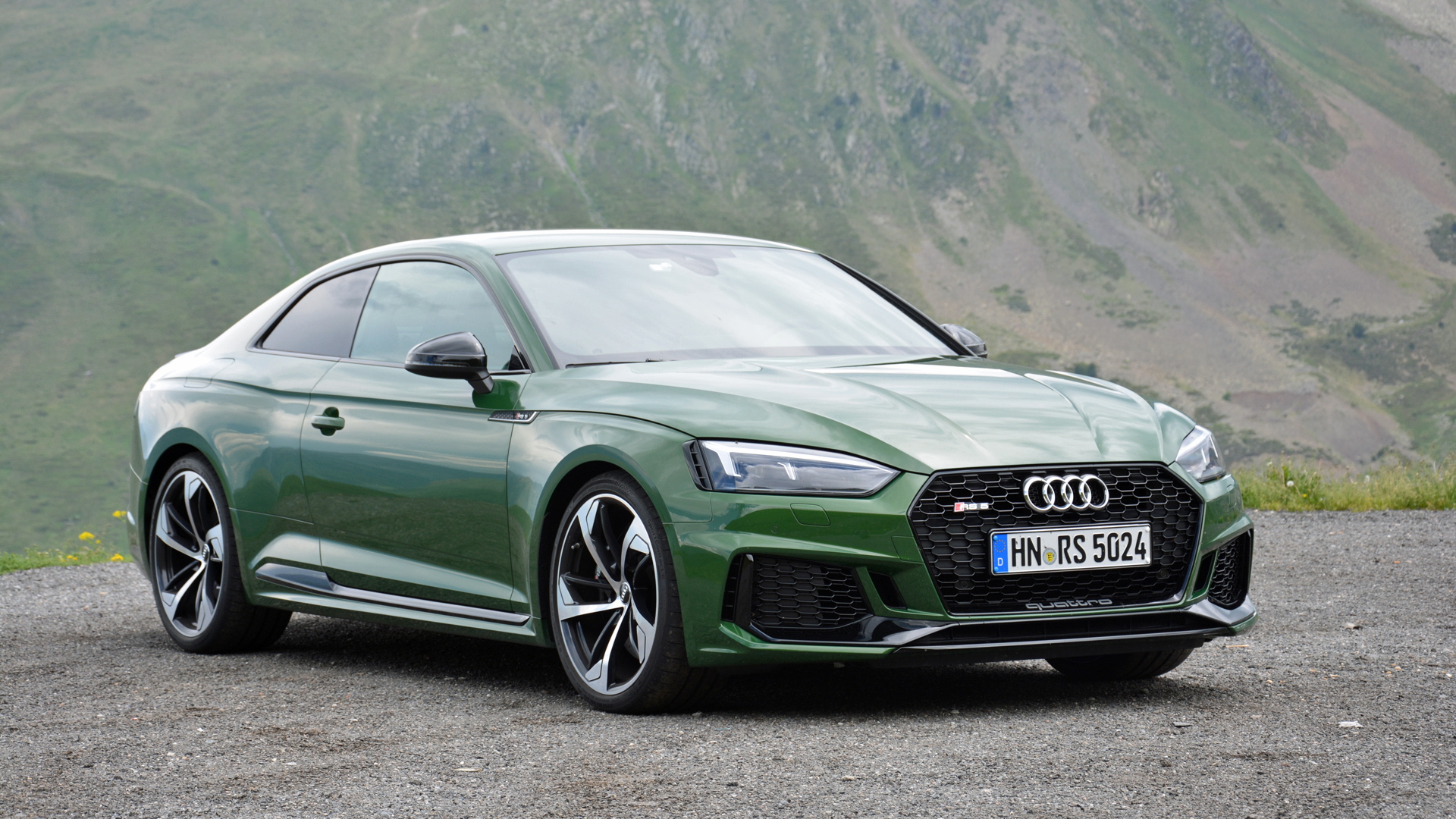 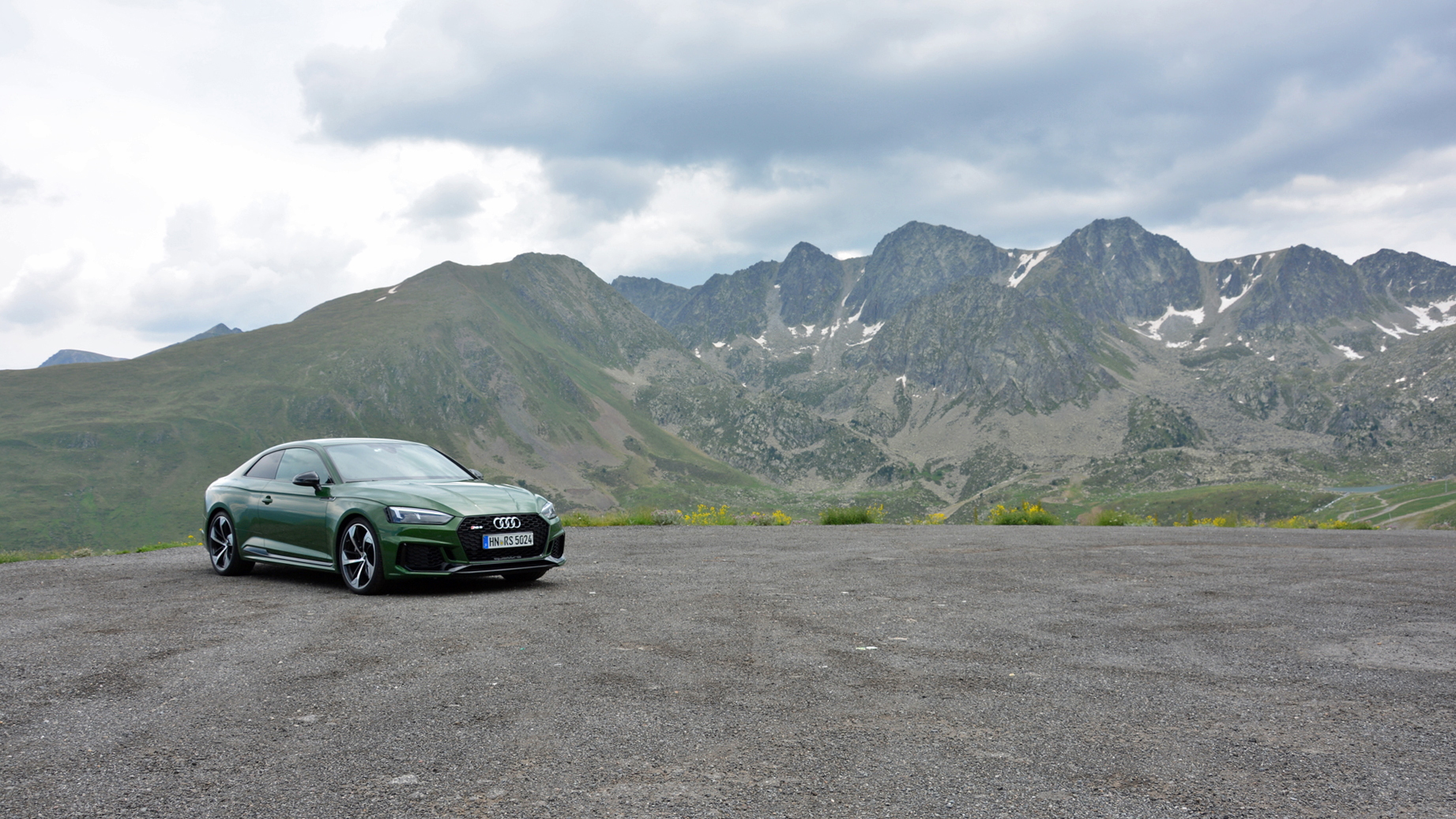 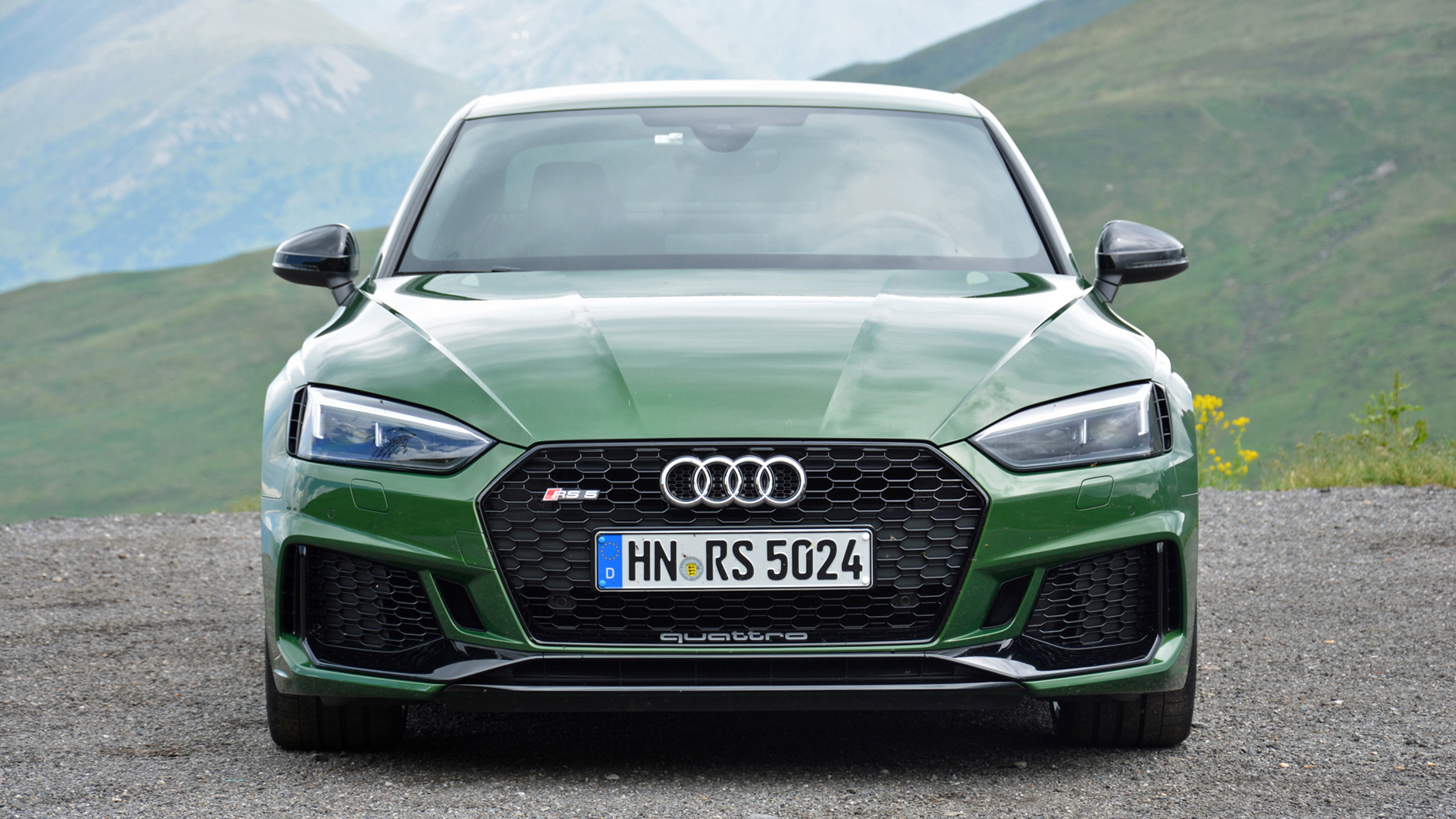 Like all animals, humans are subject to various temptations. A salad is healthier than a burger and fries, but the whiff you get within a block of an old-fashioned burger joint is irresistible. Similarly, you shouldn’t buy another project car, but when will you find another like it?

Temptation momentarily struck on a back road in Andorra as I debated passing a truck.

In a garden-variety family car, I’d have waited patiently. I’d have taken advantage of the semi’s leisurely pace to adjust the A/C, or change the radio station. In the 2018 Audi RS 5, I flicked the left shift paddle twice, signaled, and gunned it. I don’t think the truck driver even noticed I went by.

New for 2018, the second-generation RS 5 was born to answer two callings. One: It must be a capable corner carver with a quick turn-in and the agility of a cat. Two: It needs to be irreproachably docile and calm on the highway as it purrs through miles.

This isn’t just a hopped-up S5, a lot of engineering work went into making it worthy of wearing the RS emblem. Between the fenders lies a 2.9-liter V-6 that gulps two large turbos’ worth of pressure to make 450 horsepower between 5,700 and 6,700 rpm, and 442 pound-feet of torque over a broad range that stretches from 1,900 all the way up to 5,000 rpm. It’s bolted to an 8-speed automatic that channels the V-6’s grunt to all four wheels via Audi’s famed Quattro system.

Buyers who want a manual are out of luck, but that shouldn’t be a problem. Audi Sport’s research says you probably don’t want three pedals in the RS 5, according to development boss Stephan Reil. Besides, the tiptronic fires off lightning-quick shifts.

But, you need to get moving before thinking about shifting.

There’s a lot of electronic wizardry in the RS 5; Vorsprung Durch Technik, right?

And yet, it’s brilliantly analog to drive. It enters a sharp switchback with minimal body lean, and it follows the curve with so much grip that it feels like the tires are digging into the asphalt to keep the car pointed in the right direction. The steering is well-weighted, though the feedback you get from the front wheels—especially in dynamic conditions—could be improved. The RS 5 is undoubtedly the kind of machine that’s more enjoyable to drive on a fast-paced road than on a track.

The chassis is on the good side of predictable. It’s not boring by any means, but after waltzing through sharp turns for a few miles you have a better-than-decent idea of what it’s going to do and, importantly, what it’s not going to do. It’s not an intimidating performance car; it’s one that actually builds your confidence.

MUST READ: Audi RS models test for almost 5,000 miles on the Nurburgring

The RS 5 receives an evolution of the second-generation S5’s new suspension. It uses a five-link configuration on both ends, which helps bring out the car’s athletic character and lets you make what you want out of it. Conventional steel springs come standard, but my tester was fitted with three-stage adjustable dampers referred to as Dynamic Ride Control (DRC) on the options sheet. DRC relies on a network of oil lines to compensate for body roll under hard cornering.

Neither suspension option changes the RS 5’s ride height, which is merely 0.3 inches lower than the S5’s. Wide, low-profile 265/35 tires are wrapped around the default, RS-specific 19-inch forged wheels. The optional 20-inch alloys come with 275/30 rubber.

Wide brake pads hug 14.8-inch front, 13-inch rear rotors bigger than the steel wheels on the original Austin Mini. The hardware brings the RS 5 down to a stop with no fuss, regardless of whether you’re slowing down for cows in the road—a very real part of driving in Andorra—or approaching a toll booth on a French freeway.

The hint of turbo lag at launch goes away as soon as the revolutions rise—and rise they do. The V-6 loves to spin with a satisfying growl that bounces off the Pyrenees. The torque comes on thick and low, the turbos begin screaming away in sync, and the RS 5 moves down the road with a real sense of urgency.

Select the Auto mode and the ride becomes more compliant, providing the kind of imperturbable, bug-obliterating cruising prowess you’d expect from 3,600 pounds of Germany’s finest steel. Or, if you’ve had enough high-speed shenanigans, dial in Comfort mode. The RS 5 is always sporty, even in Comfort, but it becomes more mother-in-law-friendly.

The RS 5 comes with a Virtual Cockpit, which is Audi-speak for a fully digital and configurable 12.3-inch instrument cluster. Straightforward to use, Virtual Cockpit adapts to every condition. If you’re up for a spirited jaunt, there’s a mode that lets you keep track of the g forces, the turbos’ boost, and even the engine’s power output in real-time. If you’re in the mood for tunes, you can display a list of the local radio stations. If you’re completely lost, “Lost”-style, you can stick a big, high-resolution map right in front of your eyeballs.

Audi is known for making quality interiors, and the RS 5 doesn’t disappoint. Every surface, switch, and stitch is nice to look at or touch, which is what you’d rightfully expect from a car that’s likely to start in the vicinity of $70,000. Official pricing information will be released closer to the coupe’s market launch in the spring of next year.

The RS 5 looks boring as hell, at least if you ask the cows in Andorra. Most of them didn’t even bother to look up as I nonchalantly sped past. Jealous, perhaps. But, several people stopped and asked about the car during my time behind the wheel; our sign that it’s enthusiast-approved. And yet, it’s low-key. It doesn’t offend the eyes with gaudy wings and an exhaust pipe that could double as an oil pipeline. Instead, it boasts a smart, purposeful stance that those with high-octane blood recognize immediately. A model-specific grille and wider fender flares add a muscular touch to the look, while separating it from the tamer S5. My tester’s Sonoma Green paint seals the deal. It’s drop-dead gorgeous in this configuration.

The 2018 Audi RS 5 fulfills both of its missions. It’s a capable daily driver that won’t bore you even on the blandest commute, and it becomes delightful to pilot when the pace picks up.

Note to readers: Audi provided accommodations to Internet Brands Automotive to bring you this firsthand report.