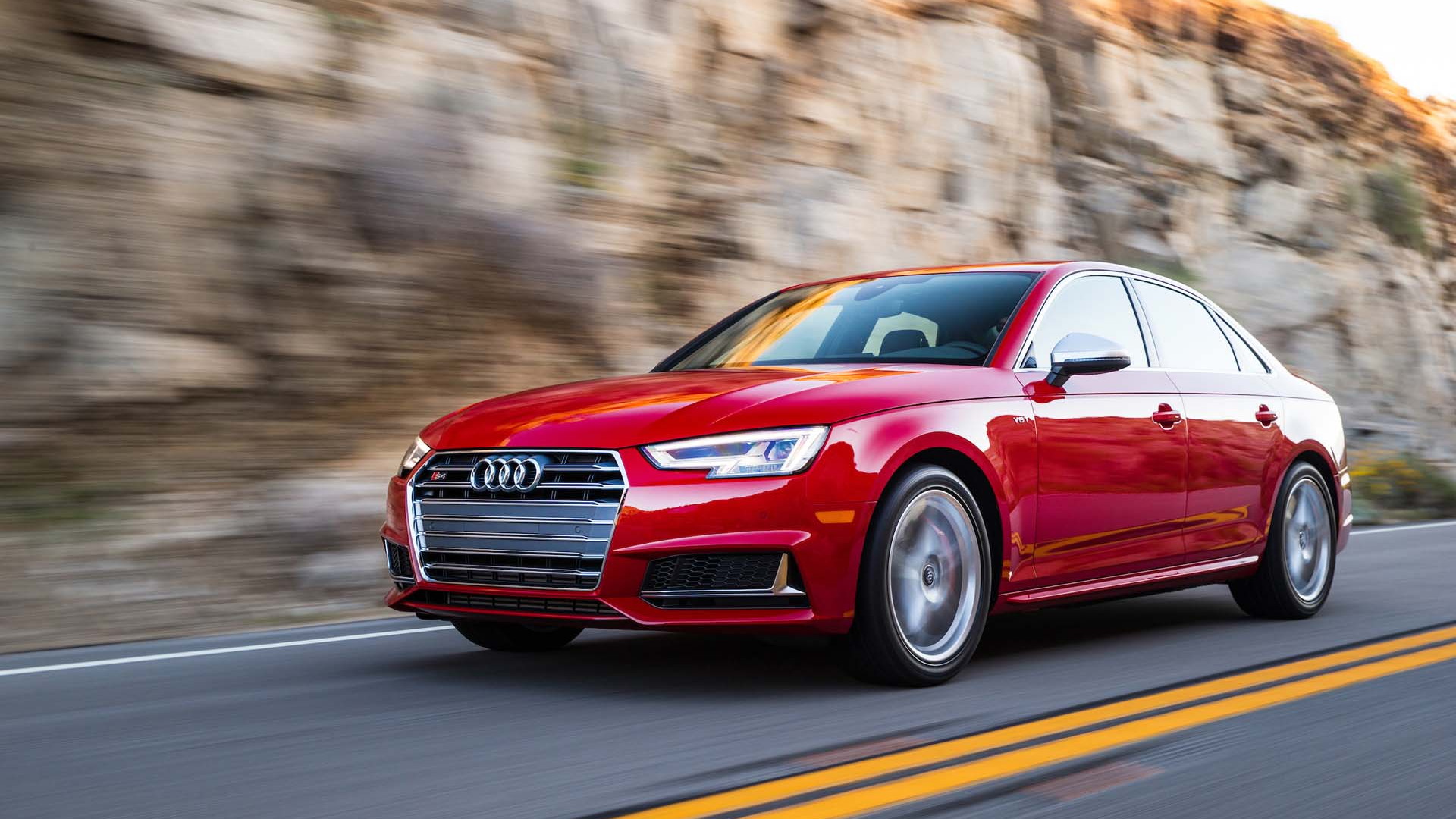 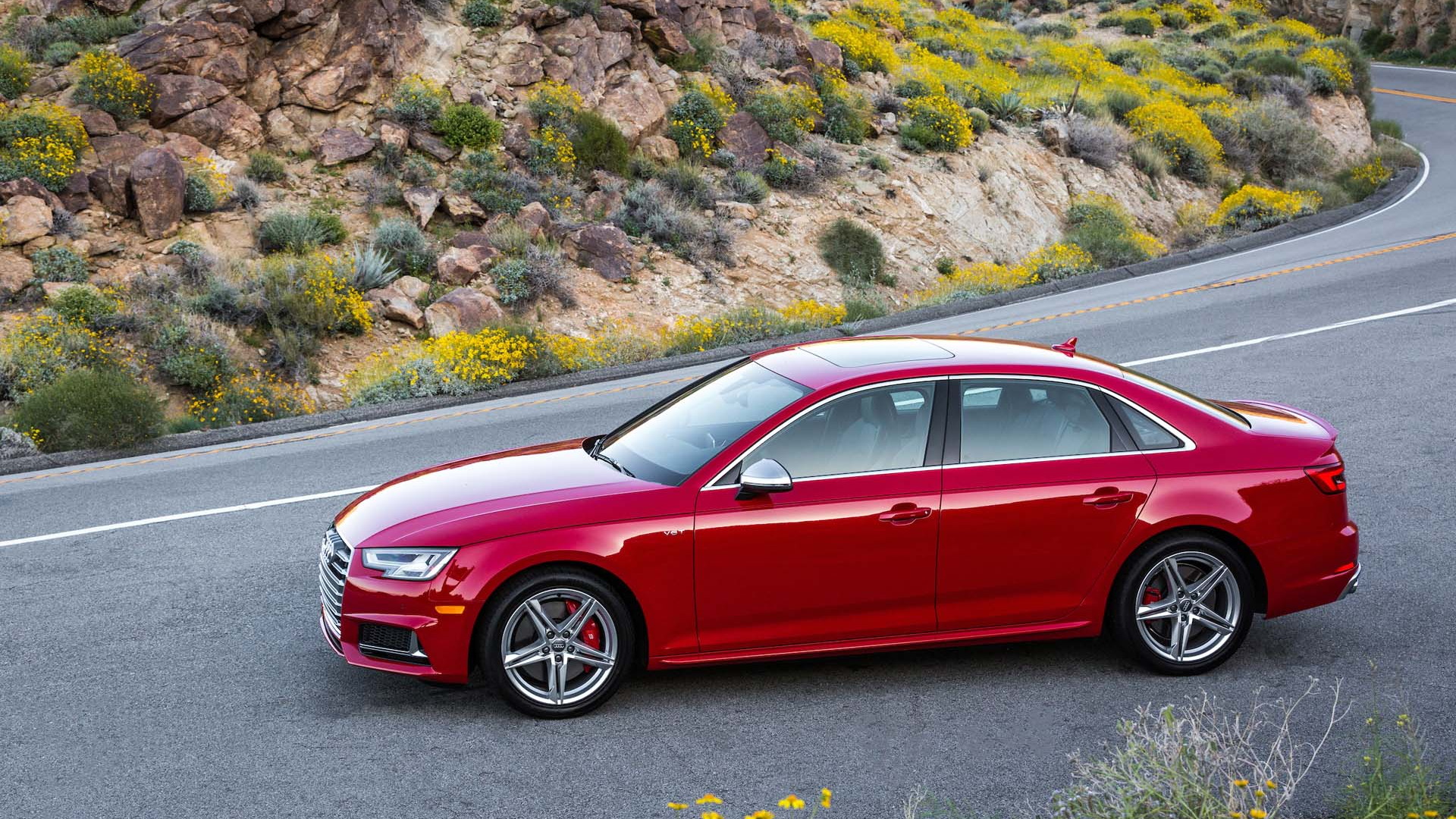 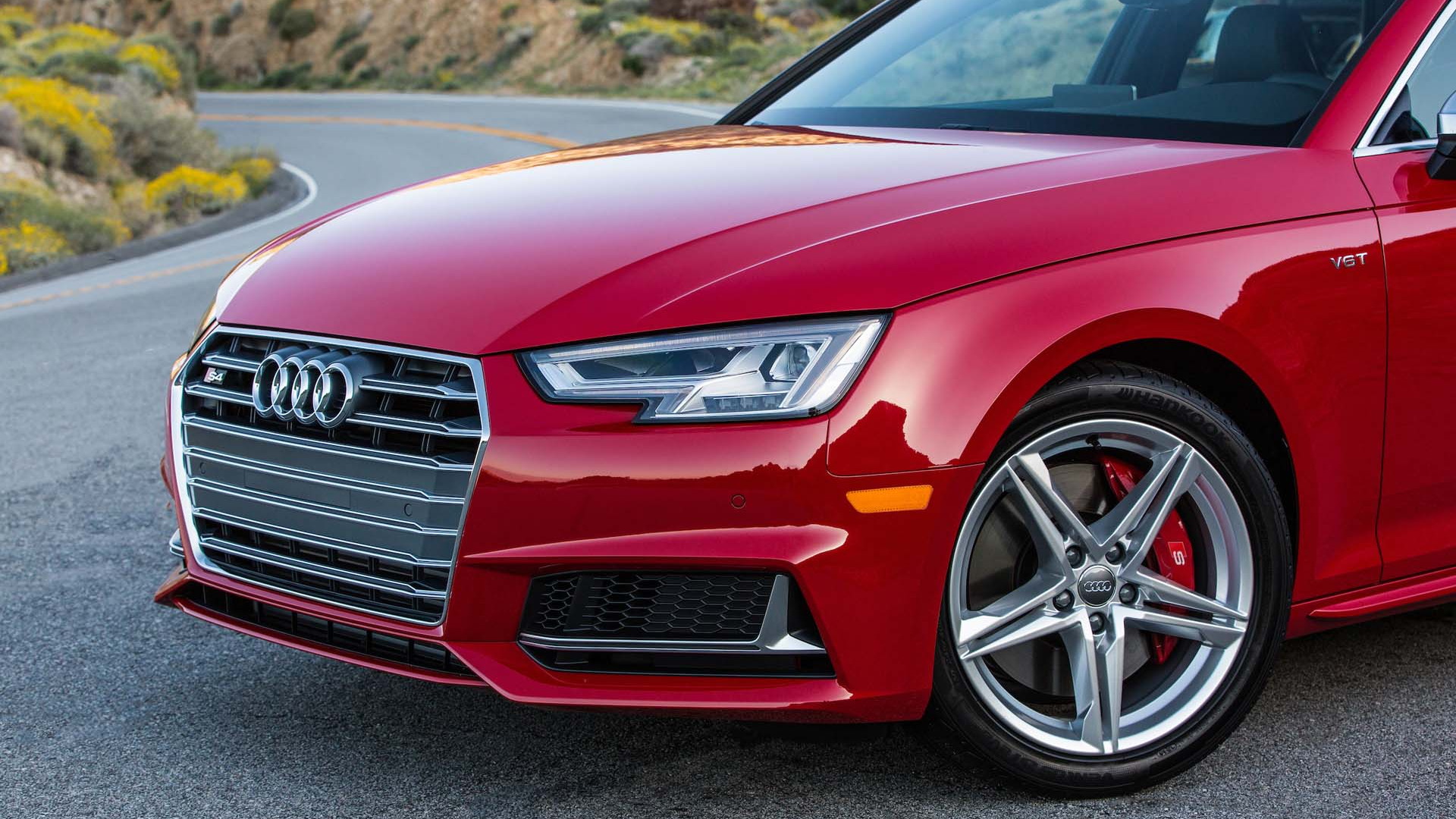 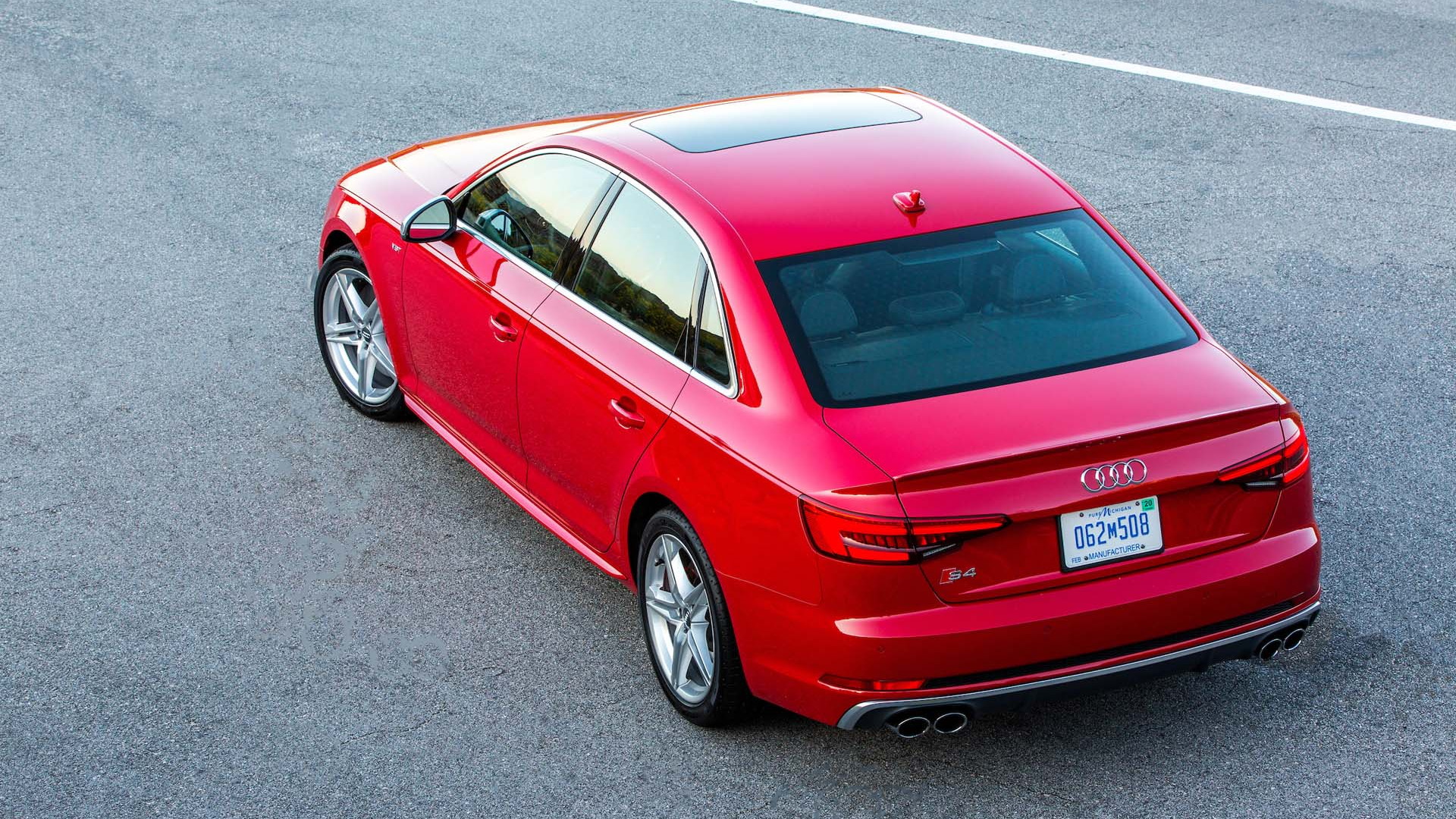 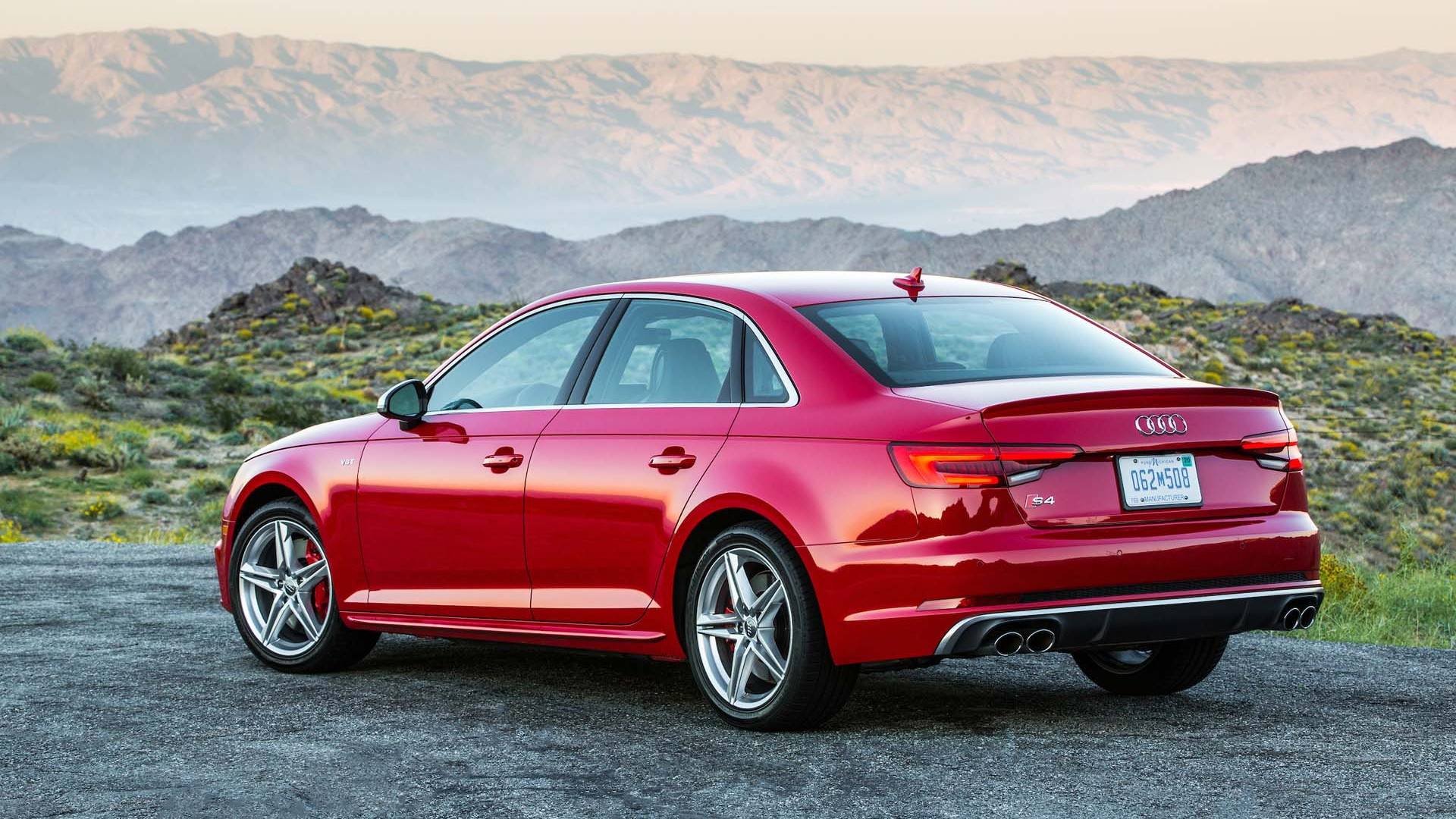 The 2018 Audi S4 carves the desert better than a blistering sandstorm. Turn after turn, the S4 knifes ribbons of pavement like a scalpel in bread dough.

The looks of Audi’s new sport sedan were hewn in the same way too. Audi’s newest S4—now firmly planted in the middle of the automaker’s luxury and sports cars—occupies a ground it shaped for itself. Once the cult car of the 1990s, the S4 has grown and evolved to shirk relative speed in favor of balanced performance now—less enthusiast, but still with plenty of enthusiasm.

The new S4’s shape too has grown from a bulbous, Skittles-colored fiasco in the 1990s to this example we had in Palm Springs, California. Grown up colors adorn the mature frame.

Lead designer Frank Lamberty has taken the A4’s already serious shape and made it even more stern with this S4. A body line, stropped by Lamberty’s experience with the first-gen R8, draws down the S4’s body wholly uninterrupted despite hiding the hood’s shunt line. Its nose is lower now and its grille has been tamed to a faceted trapezoid—auf wiedersehen massive waterfall.

The S4’s honed exterior is only rivaled in its newly sharpened engine. A 3.0-liter V-6 with a single turbocharger stuffed between its cylinder banks sits under the sculpted hood. With 354 horsepower on tap and 369 pound-feet of torque, the prodigious engine is the most powerful ever found in an S4 and it doesn’t draw on historical knowledge from a long list of bi-turbos, V-8s, or superchargers that have been planted under previous S4 hoods. The overall weight of this turbo-6 is down 31 pounds from the last-generation Eaton-boosted V-6.

Audi engineers have tuned the turbo to force feed its left bank first to escape any discernible lag with success. Most of the engine’s thrust comes on early—at 1,350 rpm—and propels the car forward to 60 mph in 4.4 seconds—more than 2 seconds faster than the candy-colored B5. The new S4 doesn’t charge up to 60 mph like a sprinter, driving from the blocks at the start. Audi’s approach to speed is wholly undramatic like an Olympic backstroke: The S4’s modest tone and a fluid shape run toward the horizon with alacrity.

Audi pushes that power down the S4’s driveline in some predictable ways. Like every S4 before it, the 2018 Audi S4 uses the company’s all-wheel-drive system, called Quattro, in a 40/60-split, front-to-rear.

This year, Audi has coupled an available sport differential planted between the rear wheels to shuffle power left to right in addition to the center differential that handles fore-and-aft duty. Similarly, new adaptive dampers lower the ride height by almost an inch from the standard setup, and can dictate ride quality between Comfort, Individual, Dynamic, and Auto settings. Those modes also control steering heft and throttle response, but all live in the neighborhood of comfort-focused rather than track-sharp—even the sportiest Dynamic setting.

That should help explain why the S4 is available only this time with an 8-speed automatic. And before we go further: No manual. Don’t even ask. Just, don’t.

The ZF automatic—loosely related to the 8-speed in the RS 7—is a traditional torque-converter autobox. Audi’s reasoning for the slip-sliding 8-speed instead of a dual-clutch? Too much torque for a DCT and smoother takeoffs. Uh huh. We’ll get back to this in a second.

The rest of the vitals are important and fill out the S4’s impressive undercard. Five-link setups at the front and rear corners are more efficient with aluminum control arms mounted directly to the towers to shed unsprung weight at the wheels. Six-piston, fixed front calipers bind 13.8-inch front rotors for maximum stopping power with 13-inch rotors in back.

Behind the wheel the engine rumbles to life with a muted note, and only a quiet burble from the quad-tipped exhausts makes its way into the cabin. It’s a more modest note than others, Audi’s approach here is subtlety.

That theme carries out in the way it drives, too. Even with the S4’s stability control set to sport, the car is hesitant to give up grip from its factory-fitted Hankook summer tires. When it does let loose, it’s more polite than a muffled debutante’s burp. Cute.

The S4’s optional rear differential and adaptive dampers are a must; it sharpens the S4 into a better machine that’s willing to take on the Mercedes-AMG C43, which is more dramatic even if the Audi is a hair slower. Opting for the package that brings both the dampers and the differential on the S4 adds a variable sport steering ratio that earns our side-eye. A generous on-center area doubles down with an impossibly quick and nearly unpredictable wheel from 45 degrees to 90 degrees and beyond. Canyon sprints take endless little wheel corrections.

The S4 loves to pile on speed and scrub it just as quickly with oversized brakes, but how it handles that speed requires an understanding.

If we consider that this S4 comes with an automatic only, with no noise pumped through the cabin or a crackling exhaust, plenty of interior tech via Audi’s new wall ‘o screens called “Virtual Cockpit,” and standard seat massagers, its worldview comes into picture.

Repeatedly, the S4’s soft approach to handling belies its newly found hardline appearance. When the weight piles up in the front in hard braking, the rear end nervously wavers under stress. Corner after corner the S4 takes its orders from the steering wheel and throttle, but seemingly has a tough time coming to an understanding with each input. It’s hard not to feel like the S4 has been damped for daily duty, not track duty.

Like that, the S4 has become a balanced weapon for dancing through corners—not brawling with them. That may feel anathema to the sports-car roots of previous versions, but like the C43 and 340i with which the S4 competes, the inevitable march toward performance badges and more expensive hard-edged cars is in the mail. Hoping for anything different is like fighting the wind.