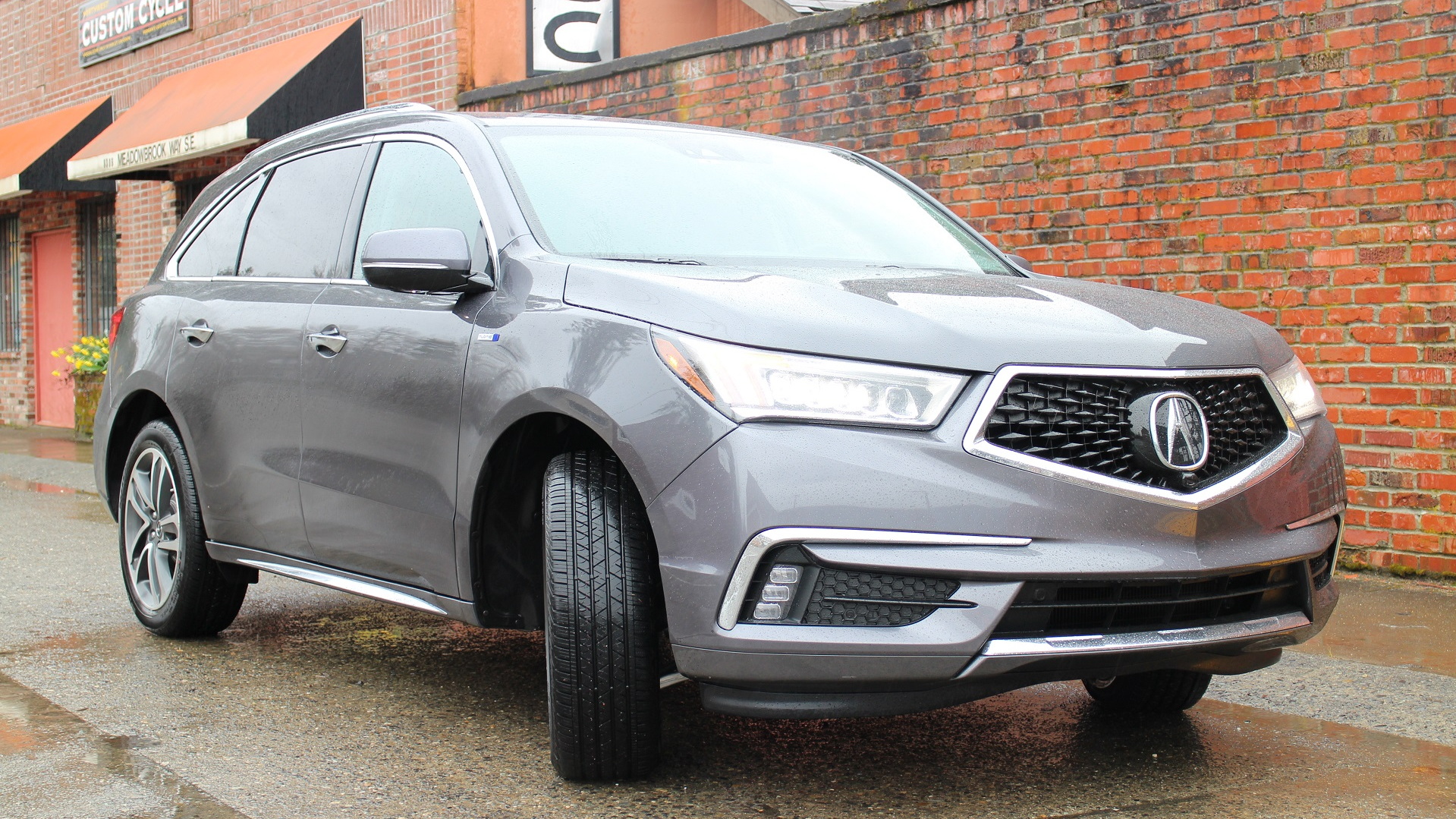 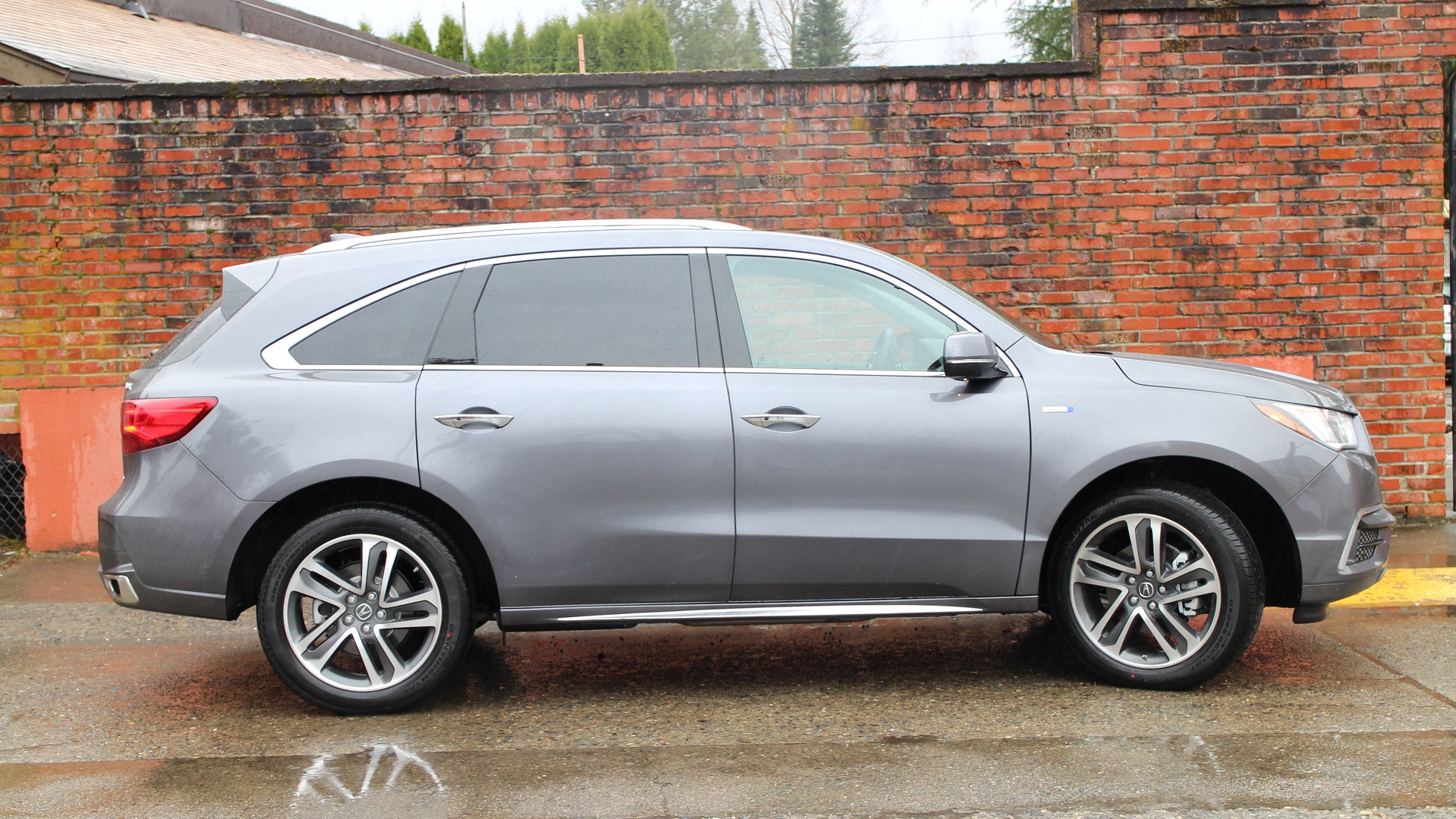 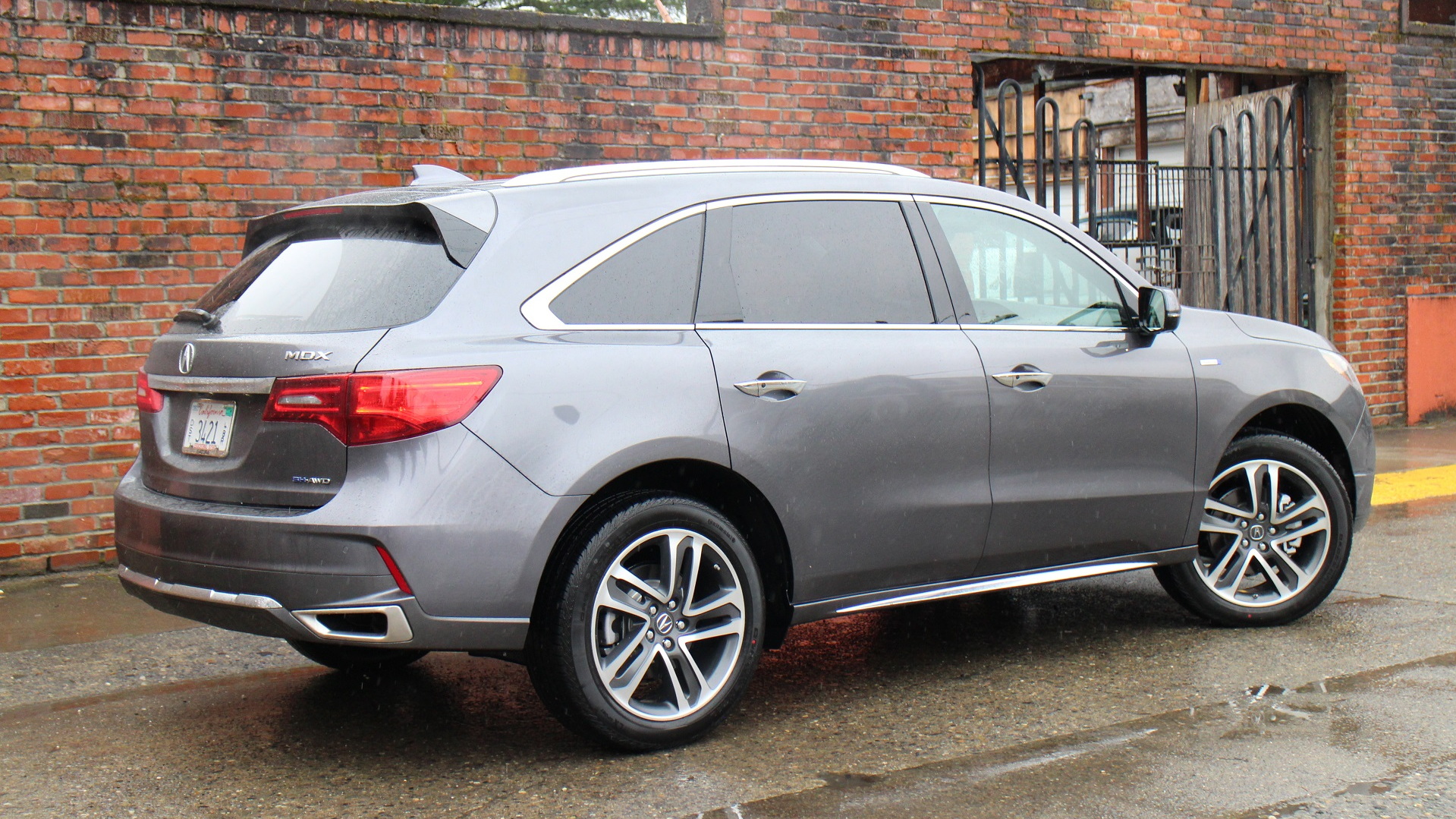 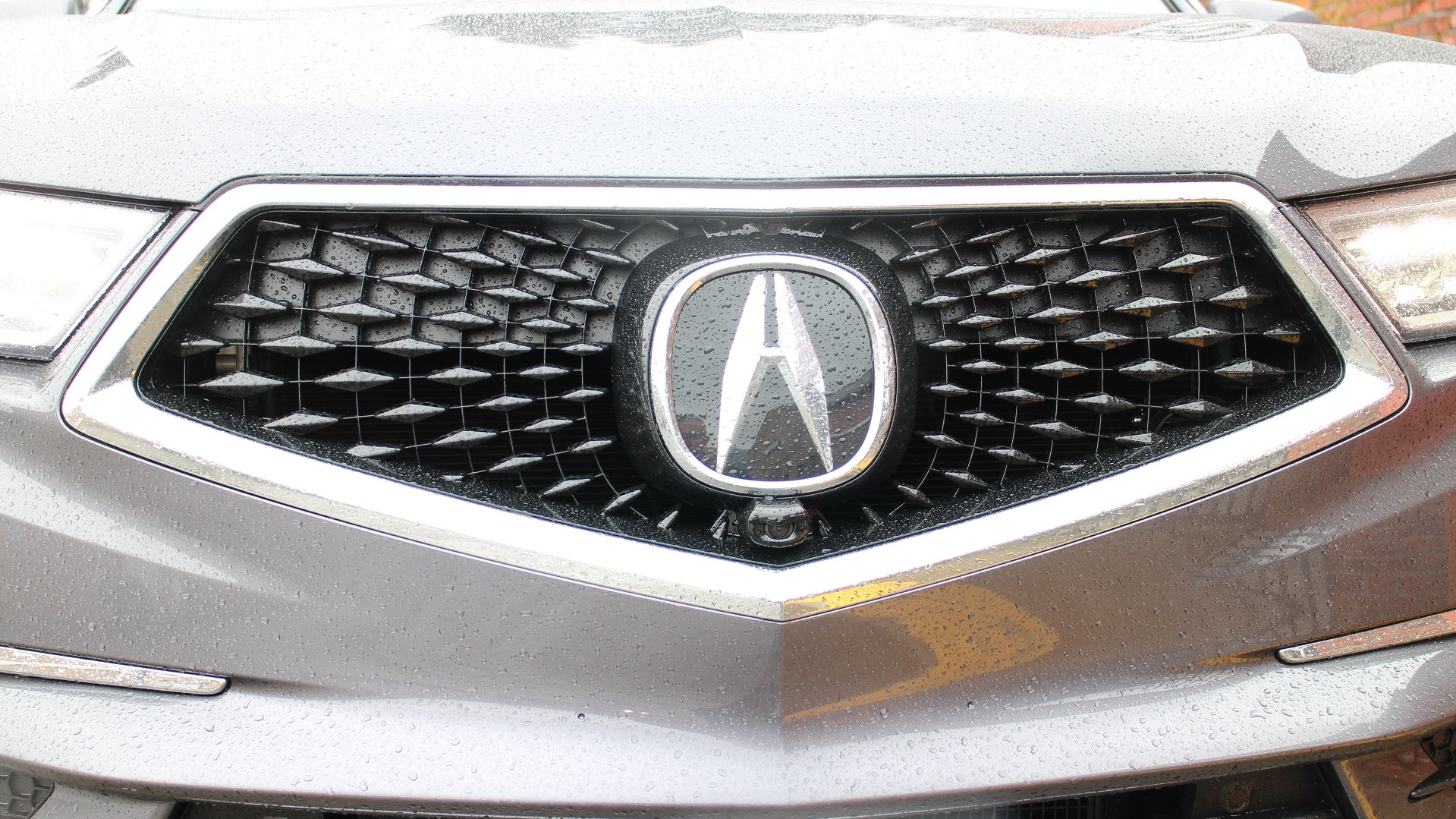 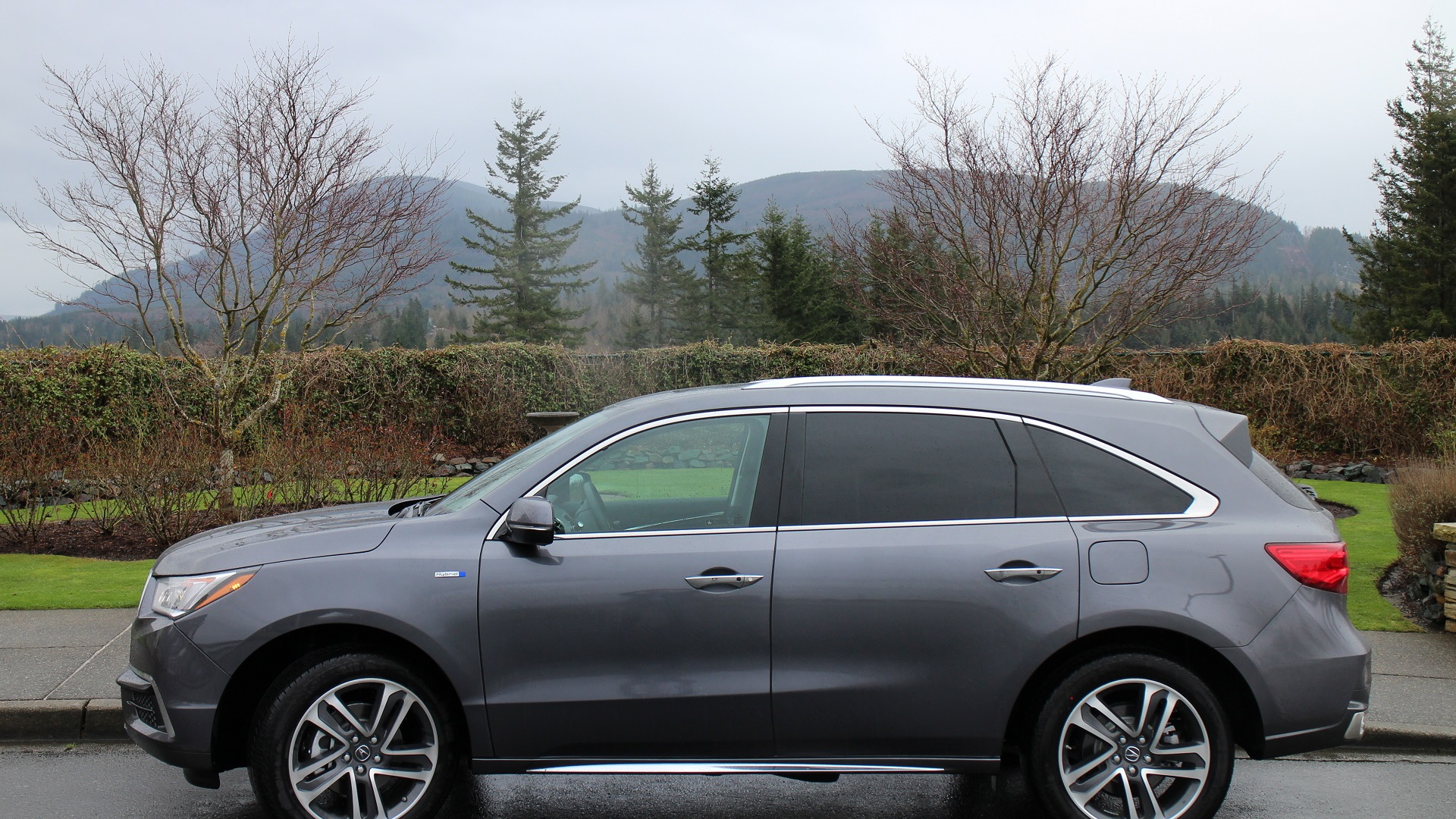 The Acura MDX is the most popular three-row luxury crossover vehicle, says Honda's premium division, with 850,000 sold since 2001.

The vast majority of those were sold in North America, since the Acura brand is almost entirely focused on the U.S.

The MDX was also Acura's highest-selling vehicle last year, just ahead of its smaller RDX crossover, and outsold all of its sedans by a long way.

Until now, the luxury hybrid SUV hasn't had a hybrid model to compete with the dominant Lexus RX hybrid, plus a handful of competitors from BMW, Infiniti, and Mercedes-Benz.

That's changed for 2017, and now we've had a chance to spend a day and more than 100 miles in what's formally called the 2017 Acura MDX Sport Hybrid SH-AWD.

That last bit, by the way, stands for "Super Handling–All-Wheel Drive," in case you were wondering. Ahem.

While hybrid SUVs are largely sold on the promise of better fuel economy, Acura's working to recast itself as the "precision-crafted performance" brand.

Hence the "sport" part of Sport Hybrid, allied to its "super handling" all-wheel drive system: the company is casting the hybrid system as a way to boost performance and sharpen handling.

The three-motor system's credentials for doing that couldn't get much better: it's effectively a version of the powertrain in the Acura NSX supercar, with a detuned V-6 engine, and flipped back to front.

The engine and motor together are rated at 321 horsepower and 289 lb-ft of torque, a boost of 31 hp and 22 lb-ft over the standard MDX.

The hybrid MDX crossover is actually the third vehicle with the system: as well as the NSX, the RLX large sedan has offered the Sport Hybrid system as well. But that big sedan is virtually invisible in the market, with miniscule sales numbers, so the MDX will be the first high-volume use for this expensive and sophisticated three-motor hybrid powertrain.

Does it improve performance and handling over the conventional MDX SH-AWD? We didn't have a standard MDX to drive when we tested the hybrid, so we couldn't do a back-to-back comparison.

What we can say is that the MDX Sport Hybrid has relatively taut handling for a large, heavy SUV, and it turns in very nicely on sharp and decreasing-radius turns.

That's a result of the ability to vary the electric torque delivered to each rear wheel, slowing the rotation of inside wheel on corners. We felt the car tighten its line in turns a couple of times, though intermittent drizzle during much of our day outside Seattle limited the amount of really aggressive driving we did.

Certainly there's little question that the Acura MDX Sport Hybrid handles better than at least two of its competitors: the Lexus RX 450h and the Infiniti QX60 Hybrid. The RX is only a five-seater, but it invented and still rides atop the luxury crossover market, inspiring Audi, BMW, Infiniti, Jaguar, and Mercedes-Benz to field competitors.

But the RLX Sport Hybrid sedan we drove the same day felt much crisper yet, pointing out the inherent challenges in trying to make a large, tall, three-row crossover into any kind of out-and-out performance vehicle.

Handling aside, we didn't have enough time to test whether the hybrid MDX delivers better fuel economy in real-world use than the standard model.

Certainly the EPA ratings for it are significantly higher. It's rated at 26 mpg city, 27 highway, for a combined 27-mpg figure against the 19/26/22 ratings for the non-hybrid version, even when fitted with a Start-Stop system.

Living with the MDX

Most three-row crossovers, luxury or not, are bought by families who use them to haul people and gear—despite the number we see daily on the roads with only a driver inside.

The MDX has retained its popularity because Acura understands what those buyers want, just like the more mass-market (and very good) Honda Pilot to which it's related.

The current MDX was launched in 2014, and received some updates this year, most notably a new front end from the doors forward.

It now has a trapezoidal grille replacing Acura's polarizing "beak" front end, which is being phased out altogether. It took us a while to notice that the grille pattern is actually a sort of sunburst emanating out from the Acura calipers logo in the center—a nice and subtle touch that distinguishes it from more conventional mesh or horizontal-bar grilles.

Other design tweaks included twin exhausts, 20-inch alloy wheels, second-row captain's chairs with a console between them, and exposed-grain wood trim inside.

We look forward to spending more time on the road with an MDX Sport Hybrid. From our day of driving, here are a few random first impressions:

Beside the new front-end design, the big news for the MDX this year was the addition of the hybrid version, giving the MDX an entry among a competitive set that uses a remarkable variety of technologies under the "hybrid" label.

The Lexus RX 450h uses Toyota's twin-motor full-hybrid system, though it's always had a reputation for not delivering on its fuel-economy ratings for many buyers. The rare, low-volume Infiniti QX60 has a weak, single-motor mild-hybrid system that was widely panned in its Nissan Pathfinder Hybrid sibling, yanked off the market after a year.

Neither of those vehicles is remotely sporty, though the Infiniti in particularly proved significantly quieter on our test loops than the hybrid Acura MDX.

Three other vehicles cited by Acura as possible competitors are the BMW X5 xDrive 40e, the Mercedes-Benz GLE 550e, and the Volvo XC90 T8 'Twin Engine,' all three of them luxury crossovers at much higher prices.

Those higher prices are due to much more expensive technology: they're plug-in hybrids whose much larger battery packs provide rated all-electric ranges of 12 to 14 miles, though usually less than that in real-world use. They get various federal and state incentives that conventional hybrids, including Acura's, don't.

Acura says it expects the hybrid MDX to make up roughly 5 percent of all sales, a modest goal it should be able to meet.

The company expects most hybrid models to be sold with the Advance Package, which adds premium leather, open-pore wood trim, heated and ventilated front seats, second-row captain's chairs, a surround-view camera system, and a heated steering wheel. Its sticker price is just under $59,000.