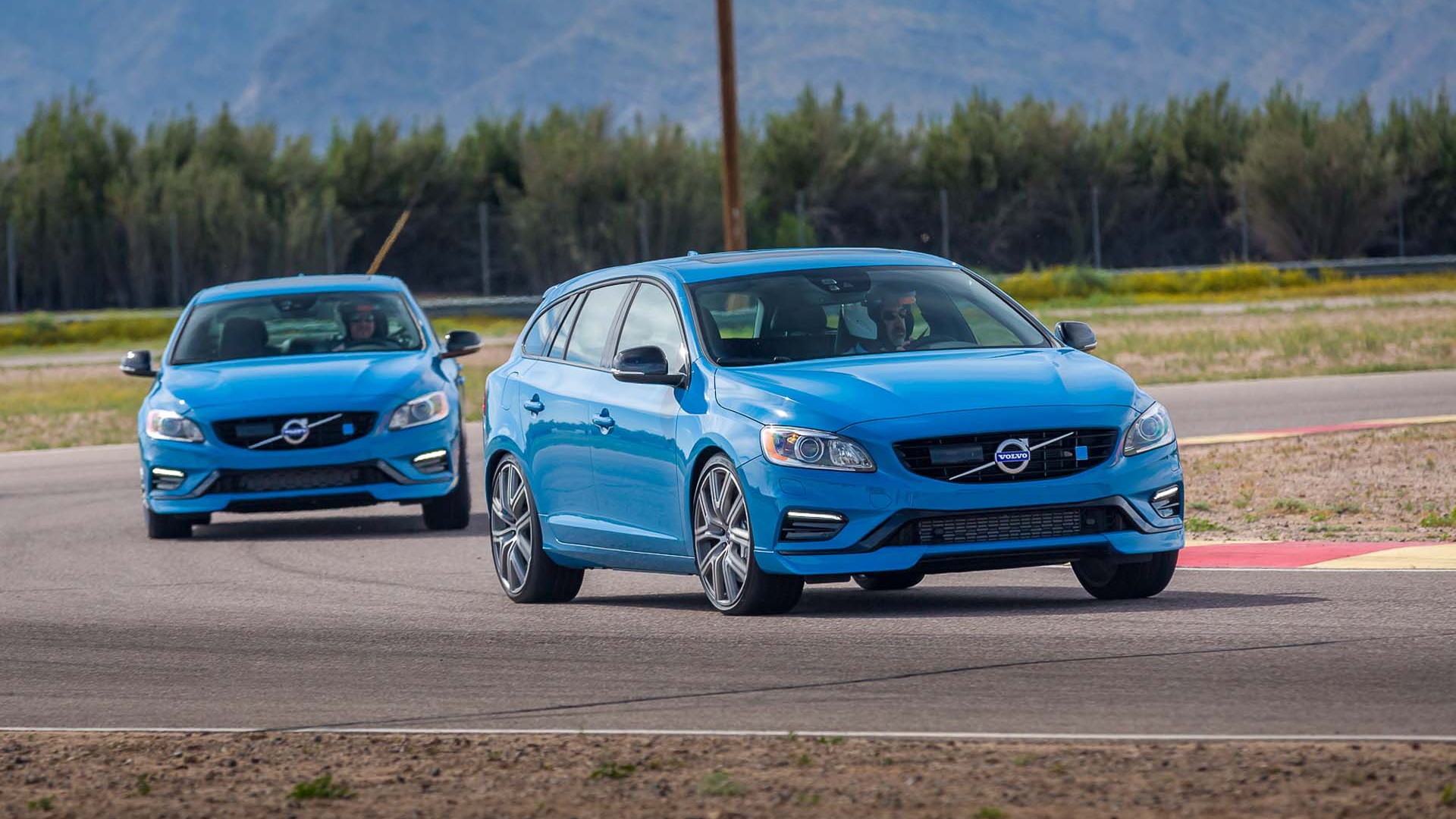 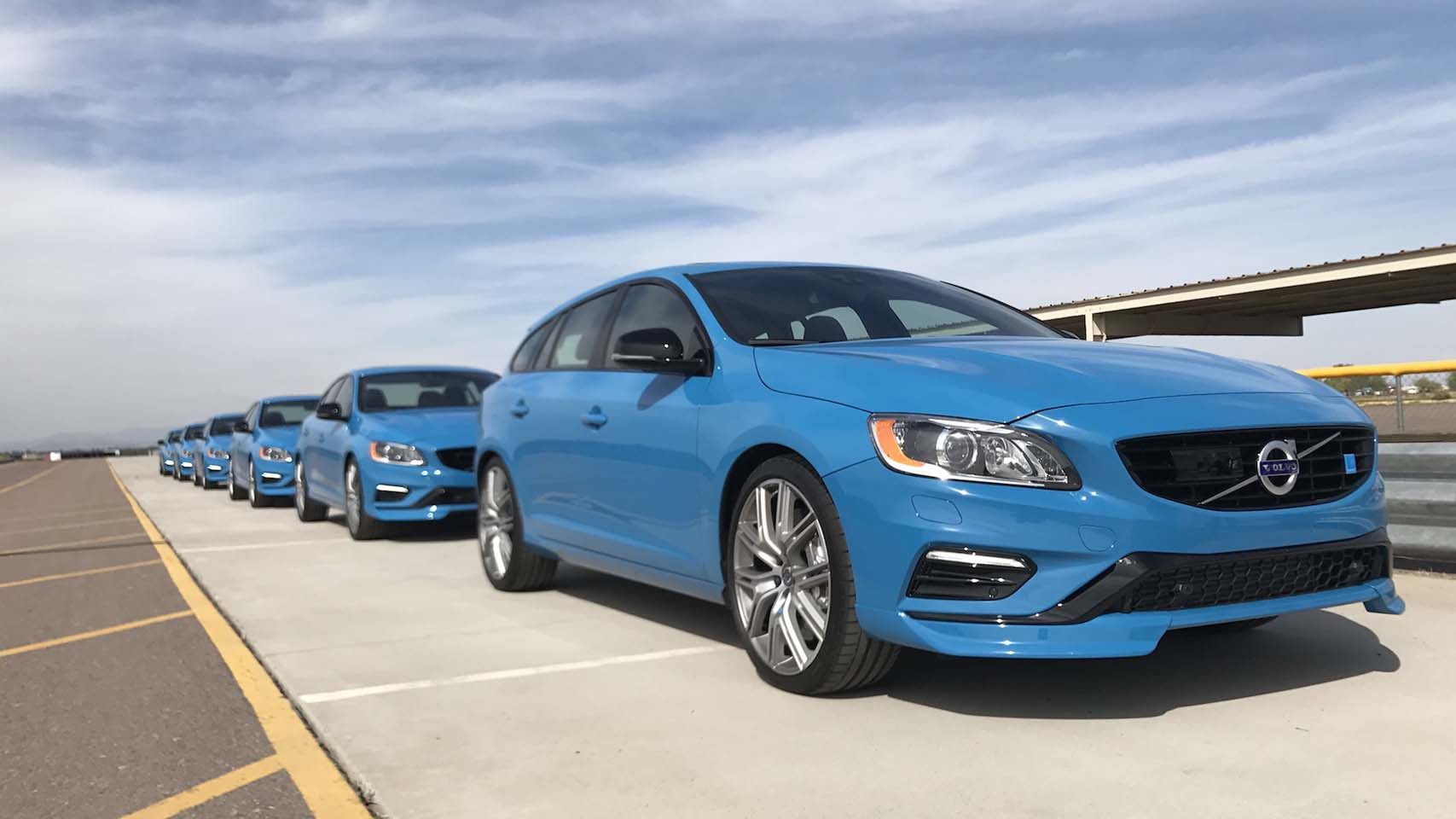 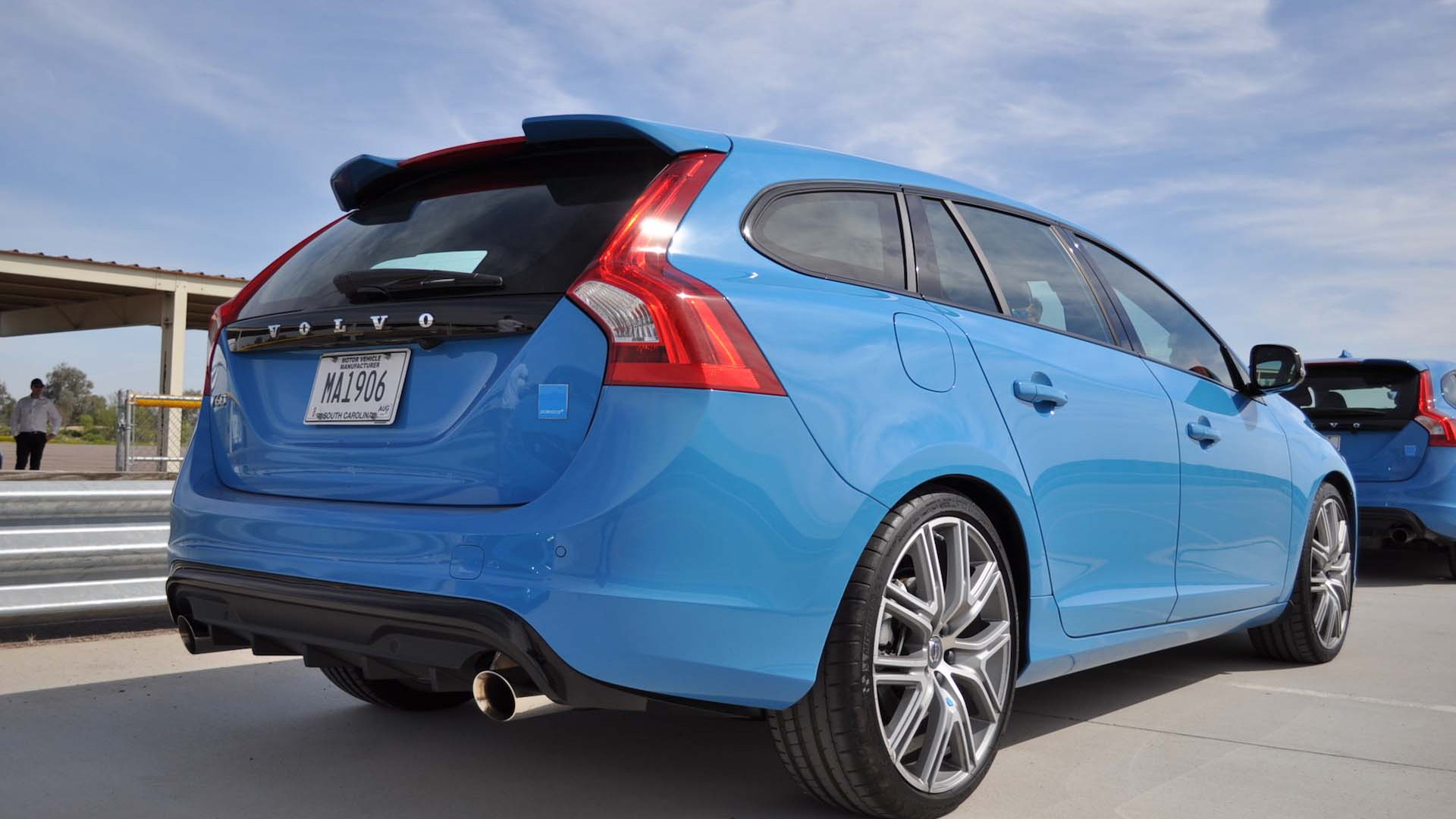 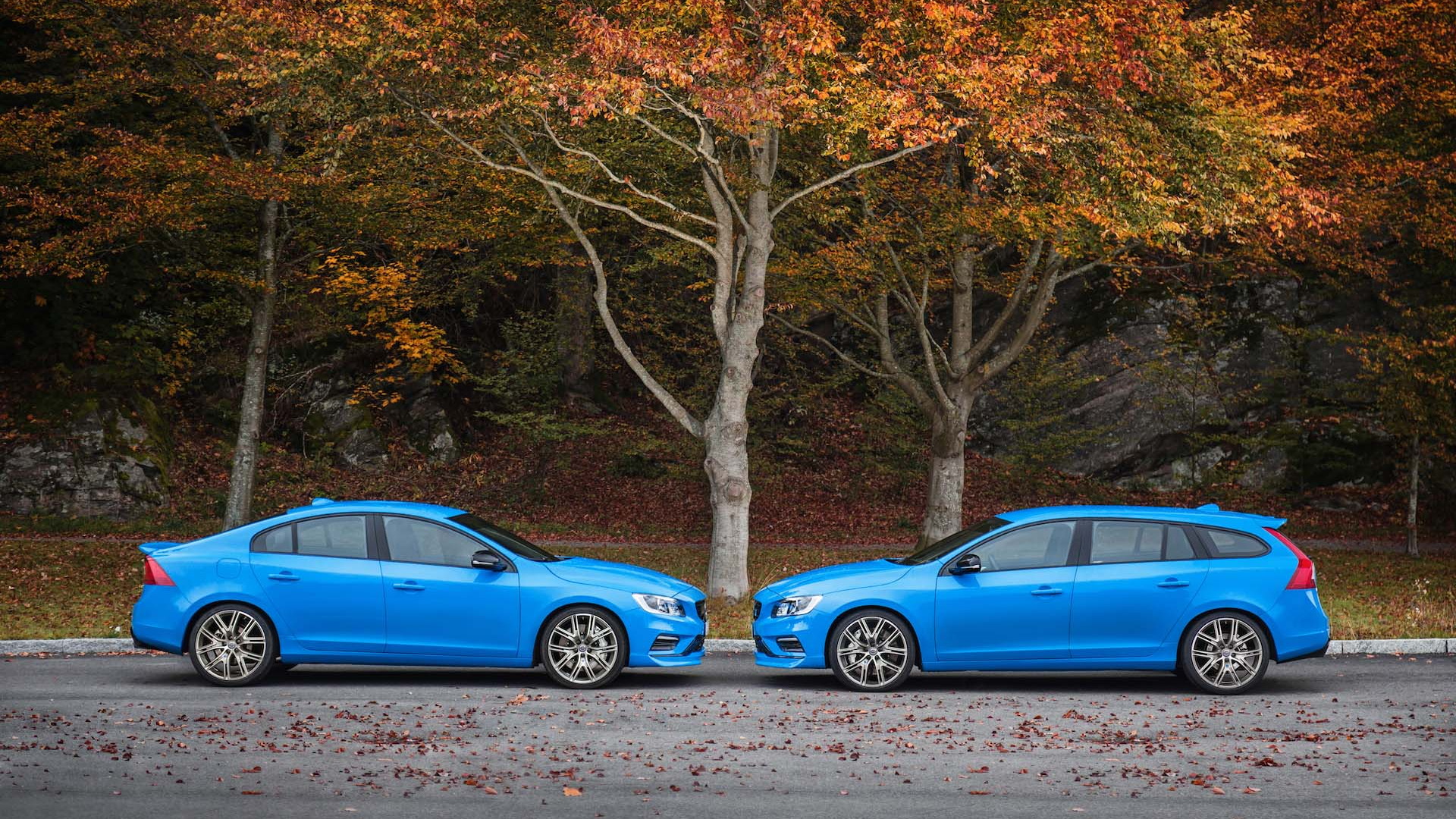 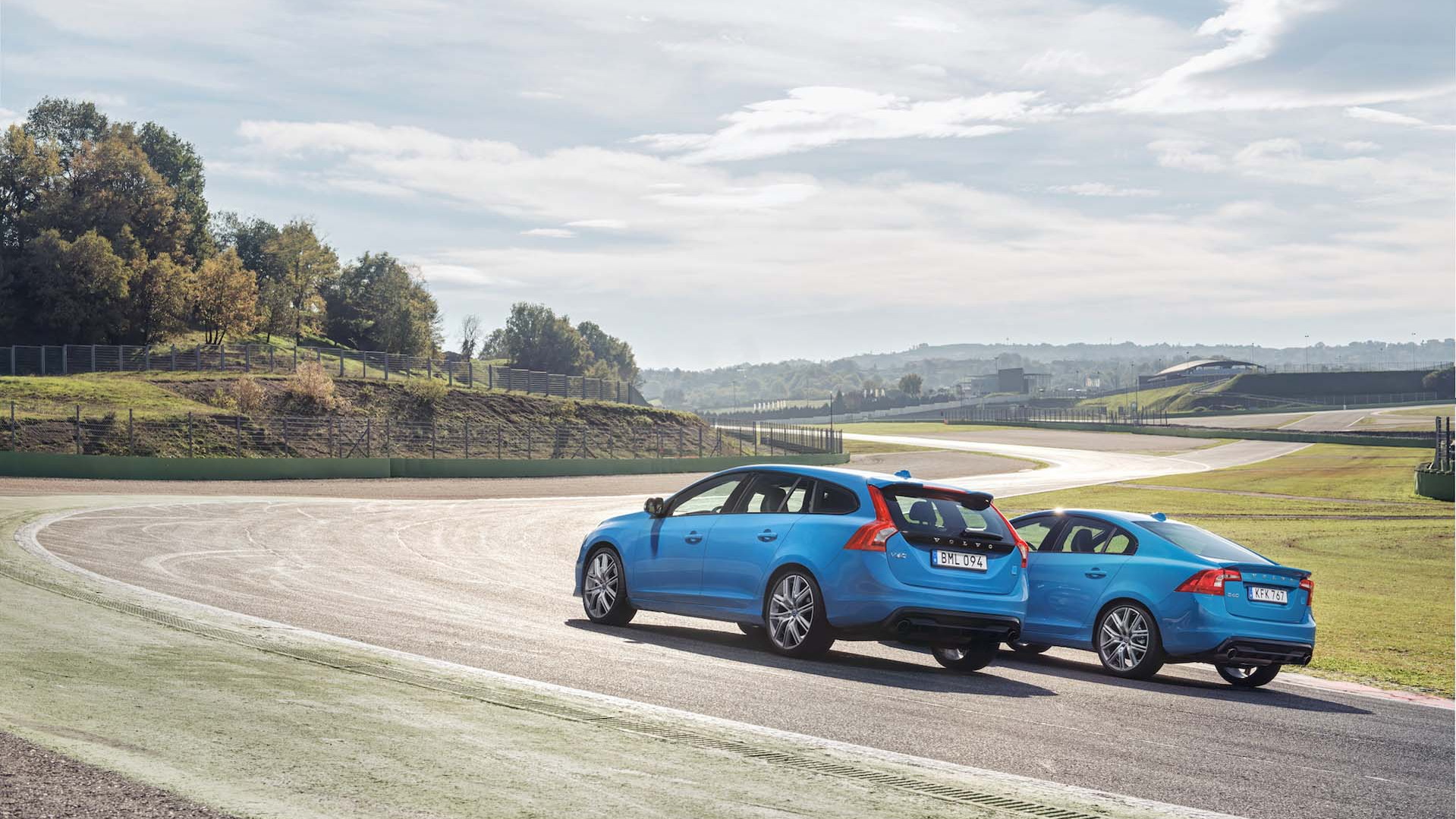 Everyone has a parent or friend's parent who owned a Volvo. Why? Because the cars are known for being sensible and safe, and that's what you buy when you have a family.

But today, there are Volvos available in Cyan Racing Blue with a little blue badge, and these aren't the sensible Volvos you remember from your youth.

Instead, Volvo used a simple formula sure to please most enthusiasts for the 2017 S60 and V60 Polestar models: make them lighter, give them more power, and make them go faster.

Up until about two years ago Polestar was a standalone motorsport and engineering firm that worked its magic touch on Volvos. Then, something happened.

Volvo made its performance intentions crystal clear by acquiring the tuning firm and turning it into the official in-house performance division. Promises were made that full-fledged Polestar models would be coming down the pipe and bolt-on parts would also be part of the menu.

ALSO SEE: Polestar's future will be electrified, and it's nearly here

Of course, Volvo had already been working with Polestar to create performance versions of its cars. The first Polestar S60 was a 2014 model. It had 350-horsepower turbocharged inline-6.

Polestar says it does not want a full-range lineup like you would find at Mercedes with AMG. Rather, it wants performance models that make sense.

Yes, that means Polestars are quite rare, like unicorns.

Down on cylinders, up on power

For the 2017 model year, Volvo's dropped the old turbocharged inline-6 in favor of a new turbocharged and supercharged 2.0-liter inline-4. The result? A healthy 362 horsepower and 347 pound-feet of torque, which is sent to all four wheels via a BorgWarner all-wheel-drive system. Despite the cylinder count going down, the new powertrain produces 12 horsepower more than before, though 2 pound-feet less in the torque department.

What the new Polestars are down on cylinder count they are up on gears, as the old, balky 6-speed automatic has been swapped for a faster-shifting 8-speed automatic with specific Polestar tuning.

The result of all this? A substantial 53 fewer pounds hanging over the front axle thanks to the engine being lighter, 9 more pounds near the middle of the car thanks to the heavier 8-speed, and a net loss of 44 pounds for a curb weight for both the 3,860-pound S60 and 3,960-pound V60.

In case you are wondering if Volvo's Polestar team simply cranked up the boost on the T6 engine offered in the S60 and V60, the answer is no. There's a larger turbo, new connecting rods, new camshafts, a larger air intake, and a higher capacity fuel pump to feed the engine.

The performance numbers show that Volvo made some wise choices. The Polestars are faster than ever, with the S60 jaunting from 0-60 mph in 4.4 seconds--down from 4.6 seconds with the 6-cylinder--and the V60 doing the deed in 4.5 seconds. Top speed? A very German 155 mph, which is of course electronically limited.

A chassis and suspension set up for 365 days a year

It's just hard to get a performance car's suspension setup perfect. It's the Goldilocks story: either it's too firm for daily use or too floppy for track use.

The Swedes have clearly put time into these suspensions, because both the S60 and V60 Polestars are impressive both in their handling and ride quality. On the highway, the 245/35R20 Michelin Super Sport tires on Polestar alloy wheels tracks smooth and steady, even on grooved pavement.

On broken pavement, the suspension doesn't come crashing down as you'll find with some performance variants. Its tune errs, just barely, on the side of "this is livable and my significant other isn't going to complain about it."

All of this is thanks to the adjustable Polestar Öhlins shock absorbers, a front strut brace reinforced with carbon fiber, stiffer bushings and top mounts, and springs that are 80 percent stiffer than the S60/V60 T6 R-Design.

It's unlikely the S60 or V60 Polestar is going to be your track car. But that didn't stop Volvo from strapping me into the driver's seat and letting me lap Arizona Motorsports Park in both models.

With the air temperature hovering near 100 degrees, the Polestar team aired down the tires a smidge as the tarmac was about to heat them even further.

Before I pulled out of the pits, Volvo provided instructions for the secret dance to put the transmission into Sport+ mode. While stationary, you pull the gear selector back and over into S mode, press it forward and hold it while pulling the steering-wheel mounted downshift paddle two times in a row. The only way to know you've accomplished this task is to keep your eye on the transmission indicator in the gauge cluster. The S for Sport Mode will blink twice. That's it. Blink, or look away, and you'll never know you've entered the super secret cheat code correctly.

With the transmission in Sport+, I turn off the stability control--which actually never fully goes off, but it loosens to the point where it'll only step in if it needs to save you and the car from a catastrophic event--and pull onto the hot track.

Barreling down the first straight with the braking zone quickly approaching as I crest 103 mph a thought occurs to me, perhaps a bit too late: how are these brakes going to handle the extreme heat? Thankfully, the Brembo 6-piston caliper setup with 14.6 inch (by 1.3-inch thick) ventilated, floating, and slotted discs up front with HP1000 brake pads prove to be more than up to the task of hauling the nearly 4,000 pound blue sled to cornering speeds. With proper cool down laps, the brakes never exhibited fade, smoking, or degradation throughout the few hours we were at the track.

The new S60 and V60 Polestars are much better balanced than before. Taking the weight off the front axles has made turn-in quicker, and the entire car feels more neutral. The all-wheel-drive system is set up with more rear-wheel bias--with the ability to shift up to 90 percent of power front to back depending on traction needs--and if you didn't know it was a front-wheel-drive-based car, you might think it's a rear-drive setup based on how balanced it is. To get these Polestars to understeer and push, you'll be hitting limits far exceeding anything you could safely do on the street, and only in the tightest of turns on the track.

Dumping the old, balky 6-speed automatic is a blessing as the new 8-speed is not only terrific around town, but in Sport+ mode it does exactly what you would want around the track. Without ever touching the paddles or gear selector, the software does an impressive job of keeping the powertrain on boil, right in the sweet spot of the power band. The shifts are quick and there's even a little back pressure fart that comes from the 3.0-inch diameter active exhaust with 3.5-inch tailpipes.

While many love to complain about electric power steering, Volvo has nailed it. The system is nicely weighted, and gives you a real feel for what is going on down on the ground. Thankfully, there's no silly Sport mode for the steering that feeds in a bunch of heavy, artificial weight. It just is what it is, and it's really good.

Should you buy it?

So why should you consider the 2017 Volvo S60 and V60 Polestars? Most buyers won't, and that's just fine with the Polestar team.

For the discerning few, it's about a balance between how much power you really need, 365-day livability, and being different. The Polestars are rare cars, with only 1,500 scheduled to be built globally this year. You're unlikely to see a row of them at your local Cars & Coffee on Saturday morning.

Photographer and friend of Motor Authority Chris Mitchell said it best, "Yeah, but it's a Polestar. That's the geeky selling point. It's not a Volvo to those who buy it. It's Swedish BTCC heritage."