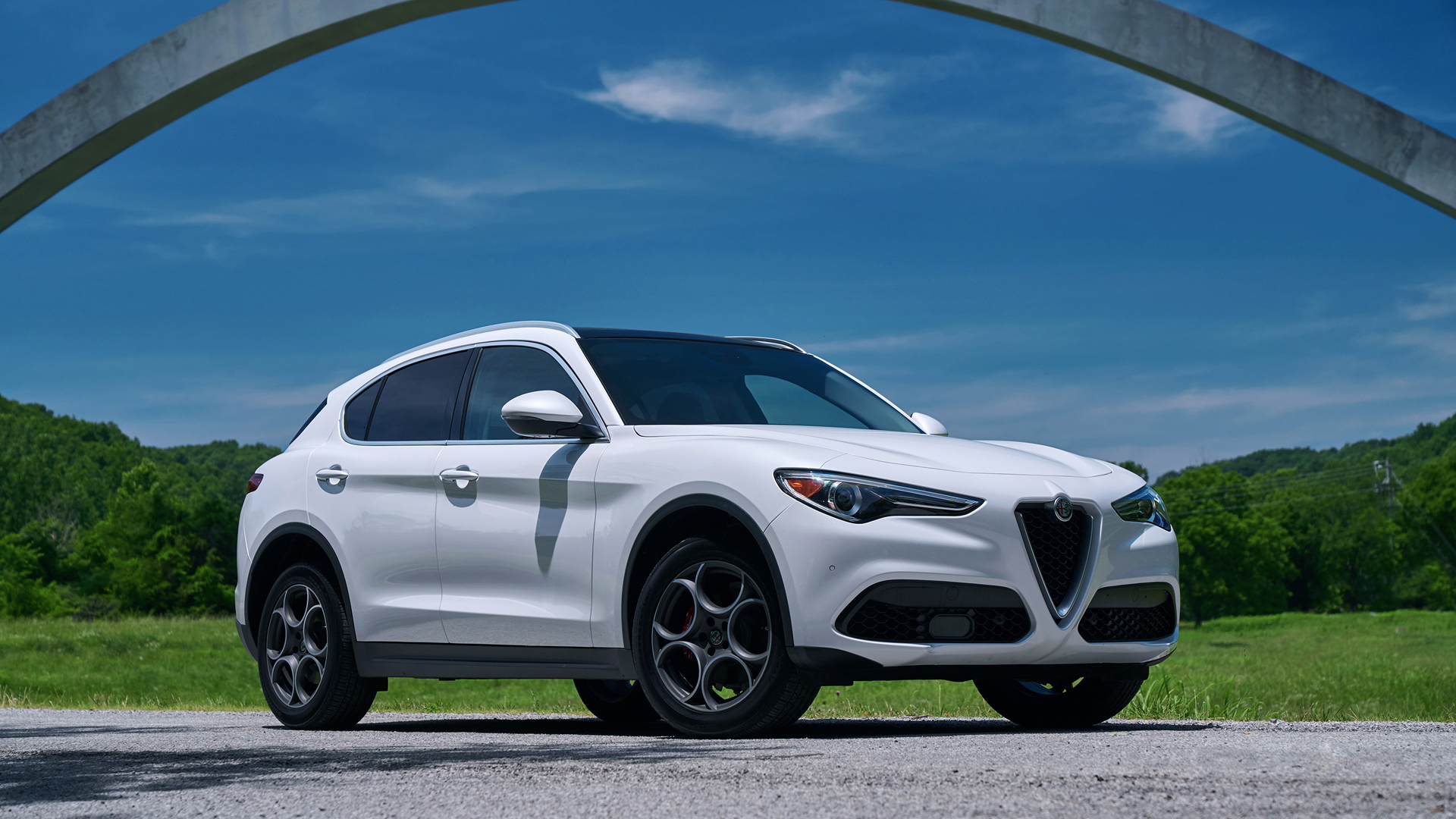 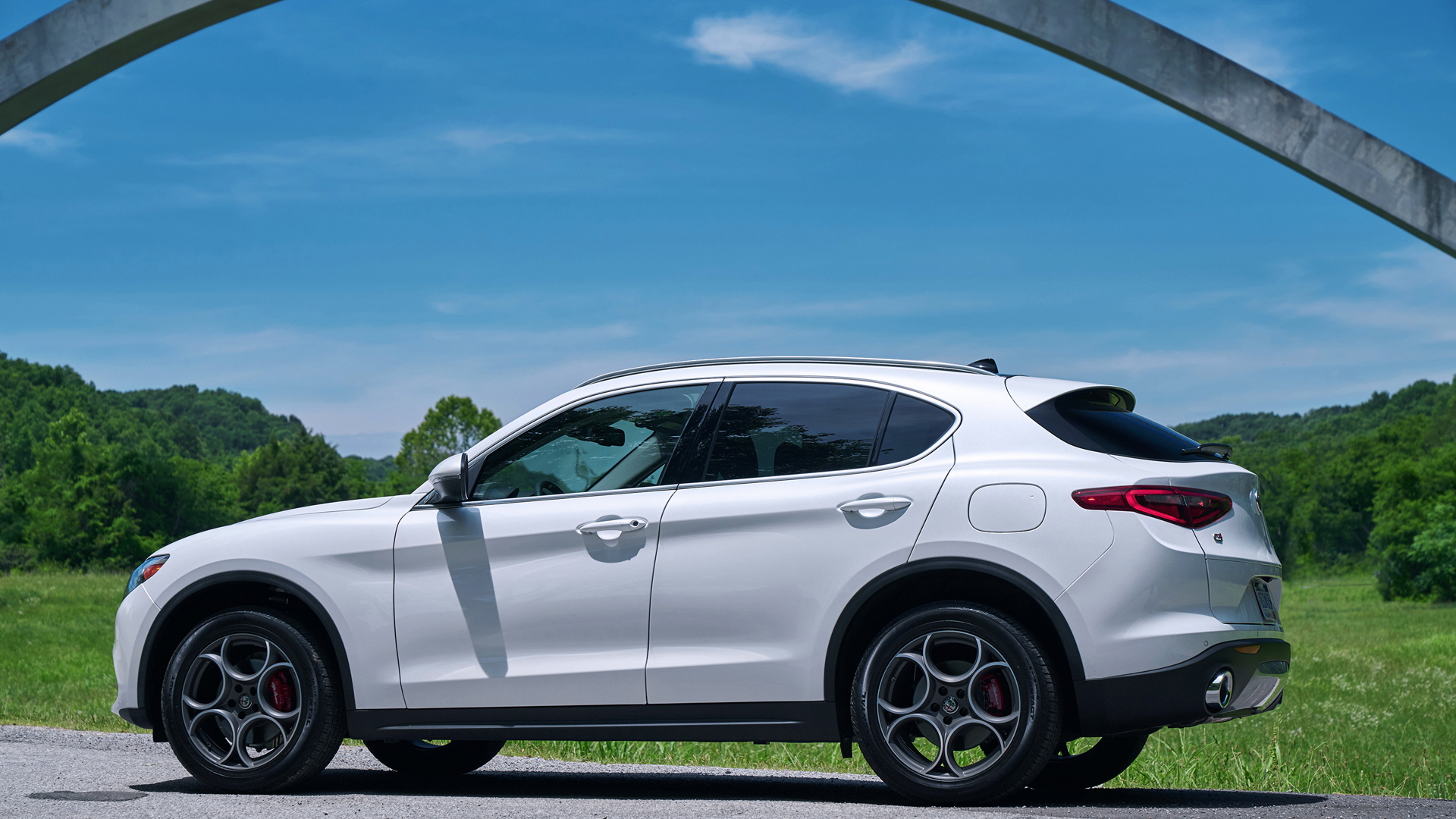 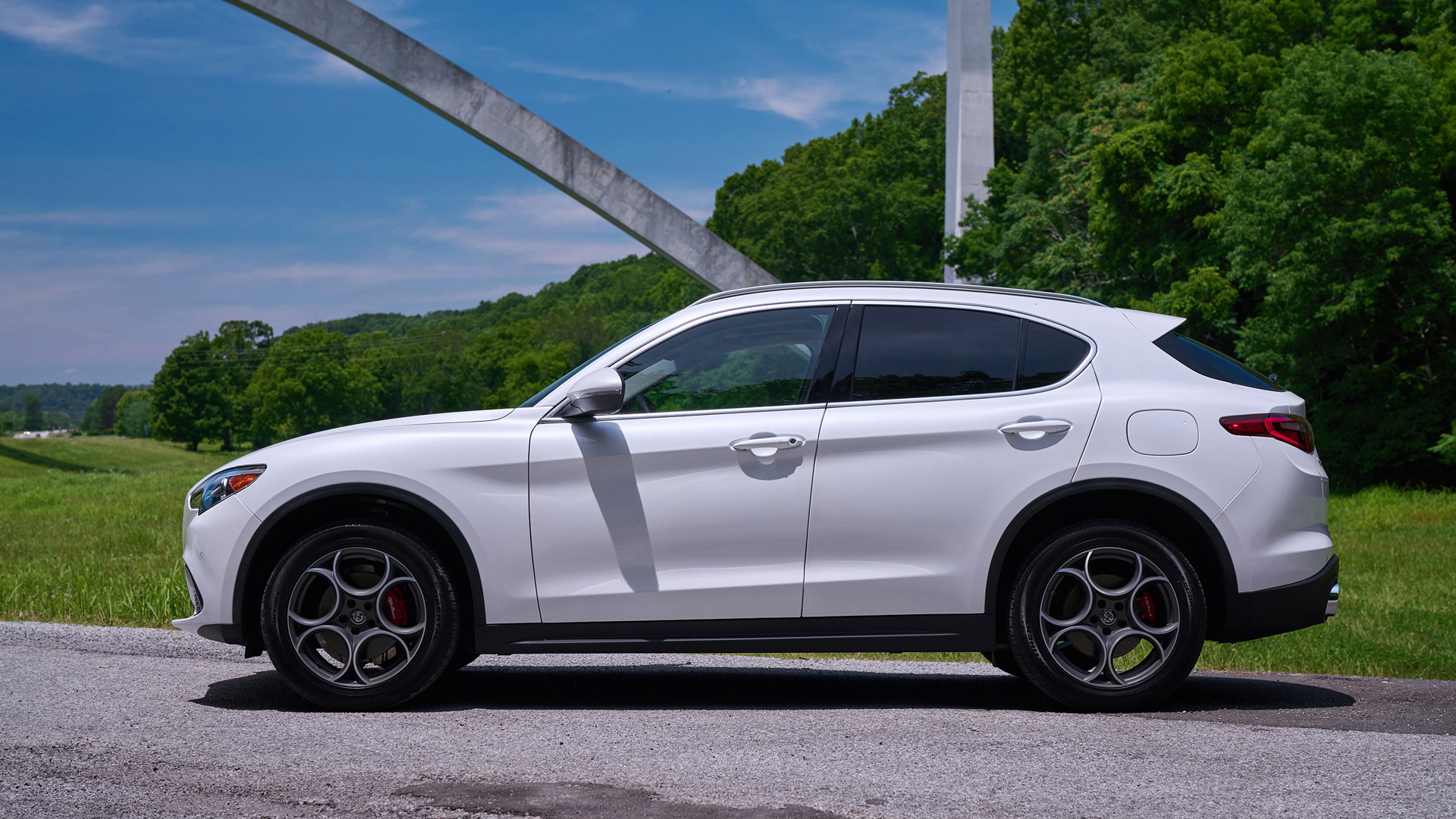 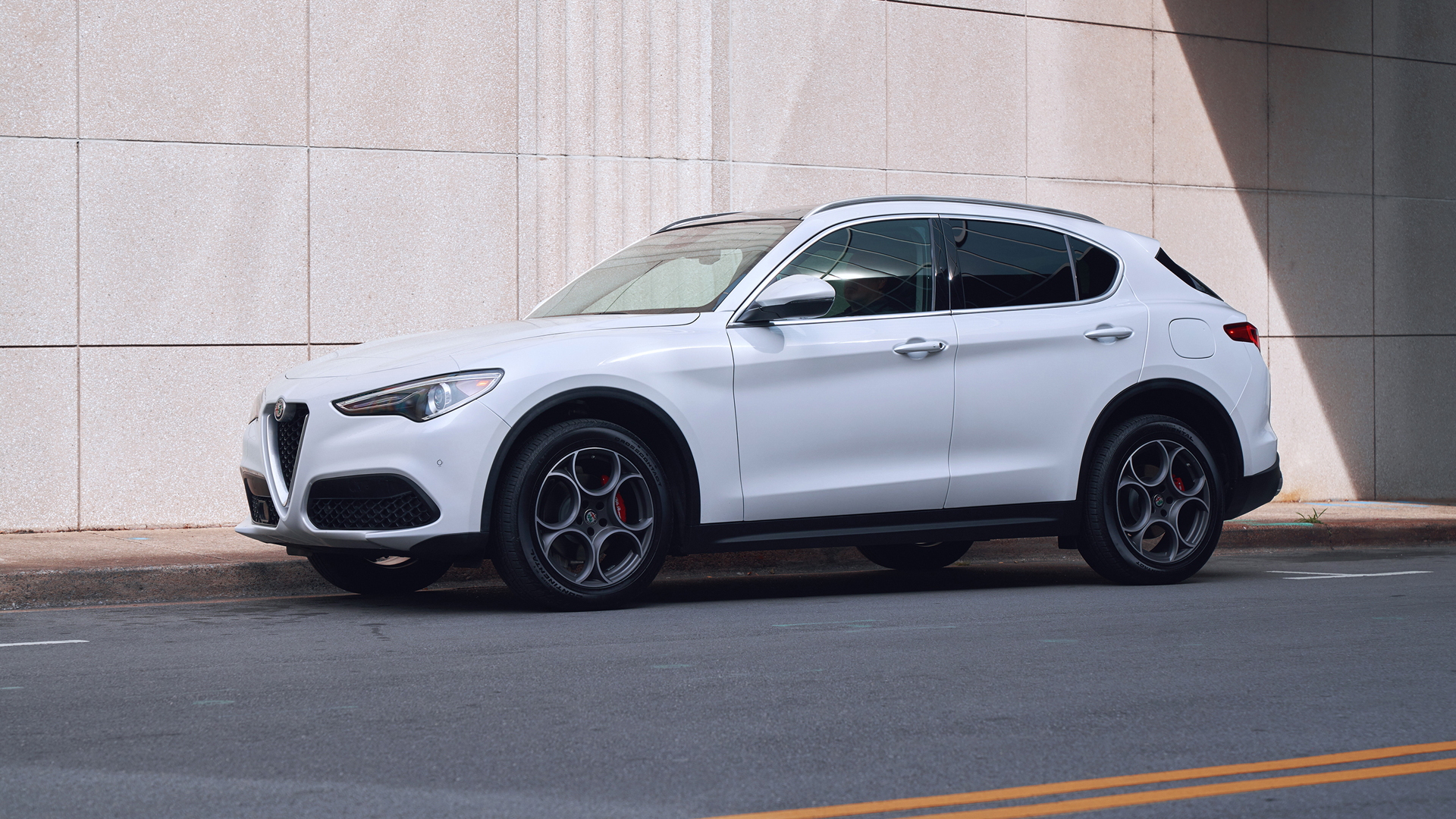 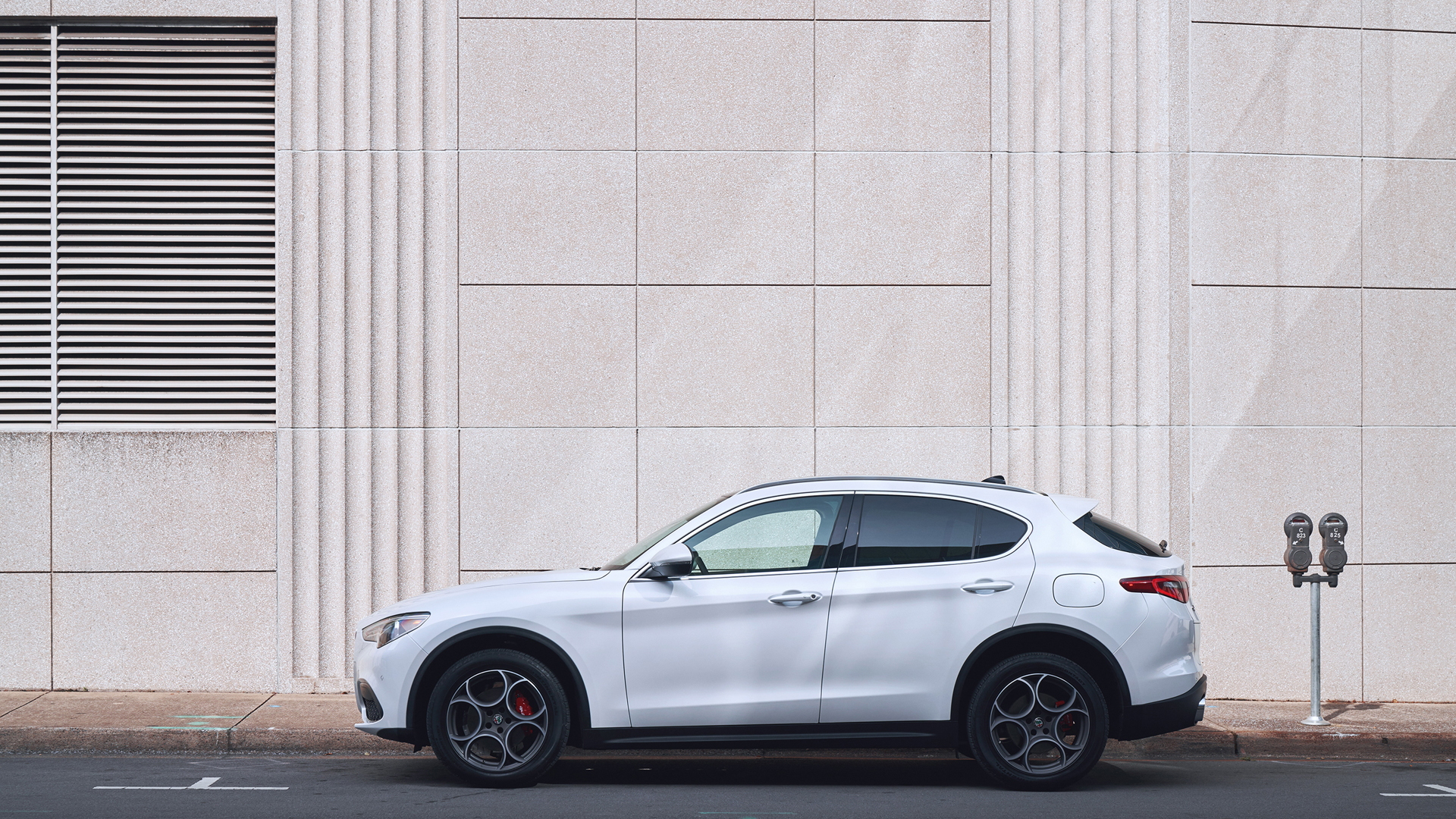 The 2018 Alfa Romeo Stelvio needed style, personality, and drivability to help the fledgling brand not only survive, but thrive. The only question we had: Could all those things be too much?

The similarities with the Giulia makes the Stelvio very easy to place on the road. It also makes it a relative iron maiden in the back seats—like the Giulia. The Alfa is down over 4 inches on the next closest competitor, and its cargo hold is smaller than the BMW X3 and Audi Q5.

But that's where the similarities start. (Inhale) The Stelvio and Giulia share a front and rear suspension arrangement, powertrains, brakes, steering ratios, and a carbon-fiber driveshaft and aluminum body panels that contribute to identical and perfect 50/50-weight distribution, and the dash, steering wheel, seats, and other interior bits are virtually unchanged, too. (Exhale.)

That means the Stelvio is excellent to drive, much like the Giulia. The base Stelvio and Ti use 2.0-liter, turbocharged 4-cylinder engines with 280 horsepower and 306 pound-feet. These tiny powerplants are more powerful than the base engines its rivals use. And while we continue to salivate over the Quadrifoglio's 2.9-liter, twin-turbocharged V-6 and its 505 horsepower—coming early next year—it's no reason to ignore the base engine.

The charming 2.0-liter scoots the Stelvio to 60 mph in just 5.4 seconds—faster than the 4-cylinders from BMW, Mercedes-Benz, or Audi—and on to a slightly unnecessary top speed of 144 miles per hour.

In real-world conditions, its power is abundant and torque easy to access. There's a real willingness to rev, giving the Stelvio a sporty character under hard acceleration. The twin-scroll turbocharger doesn't hesitate, despite the engine's impressive power figures, and in more relaxed driving the throttle is precise and easy to modulate.

But we want more.

This isn't an iconic Alfa Romeo V-6, but that doesn't mean its singing voice should be so quiet. Alfa Romeo needs to grind up Andrea Bocelli and sprinkle him in the exhaust system. By our eardrums, there's not enough volume or character in the 2.0-liter's sound.

Where the engine is good, the Stelvio's transmission is excellent. Like the Giulia, the Stelvio uses Alfa Romeo's drive mode system—dubbed DNA Drive Mode Selector—to manage the engine, transmission, steering, braking, and stability control systems. Twist the knob near the shift lever to uncover the work focused on the 8-speed autobox alone.

Dynamic is the first stop, where shifts are fastest. Under hard throttle, the shifts feel like a kick in the back. It's delightfully engaging and muscular, particularly around the 4,000 to 5,000-rpm range. On downshifts, the transmission is just as quick, but far smoother, keeping the Stelvio's 4,000-plus pounds settled.

Natural mode—Alfa Romeo's version of normal—settles the transmission and takes on the smooth, fast, and largely invisible performance in the wheelhouse of the ZF's 8-speed box. Quick to engage off the line and perfectly relaxed on upshifts, the transmission is also willing and able to drop a cog without notice. On inclines and based on the driver's behavior, the transmission will also hold a gear without protest, as I found out in the hilly suburban area outside Nashville, Tennessee, where I was testing the newest Alfa.

Any other automaker would name the Stelvio's Advanced Efficiency mode “Eco,” but logic isn't Alfa Romeo's bag. (DNE doesn't have the same ring.)  In "Advanced Efficiency," the transmission switches into a more efficient mode to promote improved fuel economy—shifts are just as quick as in Natural, but they happen earlier, in a bid to keep the 2.0-liter from revving too high. Use this mode liberally, and it'll help you hit the Stelvio's EPA-estimated 22 mpg city, 28 highway, 24 combined rating.

It's very easy to elevate the Stelvio's transmission, provided you select the optional Sport Package. Make that smart investment—$1,800 on the base Stelvio and $2,500 on the Ti—and you'll get some of the best paddle shifters on the market.

Column-mounted metal paddles stiffer than a neat scotch, the huge paddles are a delight to operate with just the right amount of travel and a solid action. They're so nice, Alfa used them twice: they're found on the Alfa Romeo Giulia Quadrifoglio. Combined with the sharp, fast transmission behavior, I shifted the Stelvio just for the hell of it.

The rest of the driver interfaces are nearly as good. The sport seats are only available on the Ti Sport and account for the $700 upcharge between it and the standard Stelvio Sport. These chairs are supportive, with large side bolsters that hug the driver through even the most aggressive turns. But while the seats have an extendable bottom cushion, the six-way adjustability isn't quite enough to get into the ideal seating position. That said, if you're a fan of dropping the steering wheel in your lap (Eds note: I am) the Stelvio's thin-rimmed, flat-bottomed steering wheel telescopes out well, and has excellent grips.

That gorgeous leather-wrapped steering wheel works for a steering system I have a love-and-mostly-like relationship with. Alfa Romeo attached the same super-fast steering ratio from the Giulia Quadrifoglio—12 to 1—to a 4,044-pound crossover SUV. We call it woozy; Alfa engineers may have called it lunch.

The good news is that the Stelvio turns in faster and more aggressively than most sports sedans. It's a telepathic steering system with plenty of feedback and a willingness to progressively build weight as the steering angle increases.

At the same time, that silly-fast steering ratio isn't great for commuting. At freeway speeds, the Stelvio requires near constant, very tiny corrections. While my freeway time was limited to a few 15-mile jaunts up and down Nashville's Interstate 65, the regular adjustments quickly grew tiring, even in Natural or Advanced Efficiency, where the system is in its “comfort” setting. If you're planning on purchasing a Stelvio, make sure your first test drive includes some time on the freeway, because buyer's remorse is a real possibility with this steering rack.

The same is true of the brake pedal. The brake-by-wire pedal has a sensational feel under high- and medium-speed braking, like you'll experience on a fun, winding road. But around town, it's next to impossible to bring the Stelvio to a smooth stop. And that gets more tiring faster than the steering system.

But then, you'll quickly forget about these issues when you toss the Stelvio into a bend. My test car—a Ti Sport—didn't have the active suspension, which arrives later this model year, but it didn't need it. The outright handling limits are remarkably high and approachable for a crossover SUV, thanks to the perfect weight distribution, while the little amounts of roll, squat, and dive there are arrive predictably. But the Stelvio doesn't feel as uncompromising as the Jaguar F-Pace.

Alfa Romeo's decision to only offer up to 20-inch wheels and 45-series tires—while Jag goes with 22s and 40-series rubber—has a huge impact on the ride. Alfa Romeo built a dynamically capable car, sure, but its ride is smooth, quiet, and relaxed in everyday commuting.

Prices for the 2018 Alfa Romeo Stelvio start at $42,990, including a mandatory $995 destination charge. You don't want that one—it's fine, but you want to spend the $2,000 for the Ti trim and its standard heated seats, heated steering wheel, and an 8.8-inch infotainment system. Tack on the $2,500 Sport Package, because it gives you the best paddle shifters in the world, an active limited-slip differential, aggressively bolstered front seats, a sporty steering wheel, and a more aggressive suspension tune. We're not done: You'll then want to downgrade from the Sport's standard 20-inch wheels to the no-cost 19s, because they're made in Alfa Romeo's iconic five-hole design, and that's the only wheel design the company should offer. All done, you're out the door for around $48,000.

The Stelvio is agile and fun, but its brake pedal and steering are so biased towards driving performance, its backseat is so small, and its cargo hold so average that Alfa Romeo should be genuinely concerned about the Stelvio's appeal. We say: New flair, don't care.

Enthusiasts have been begging for crossover SUVs that aren't boring, and Alfa Romeo has delivered without reaching the absurd prices Porsche's Macan demands. The Stelvio is the crossover SUV for customers that don't want a crossover SUV. If you find yourself in that category, get to your local dealer.