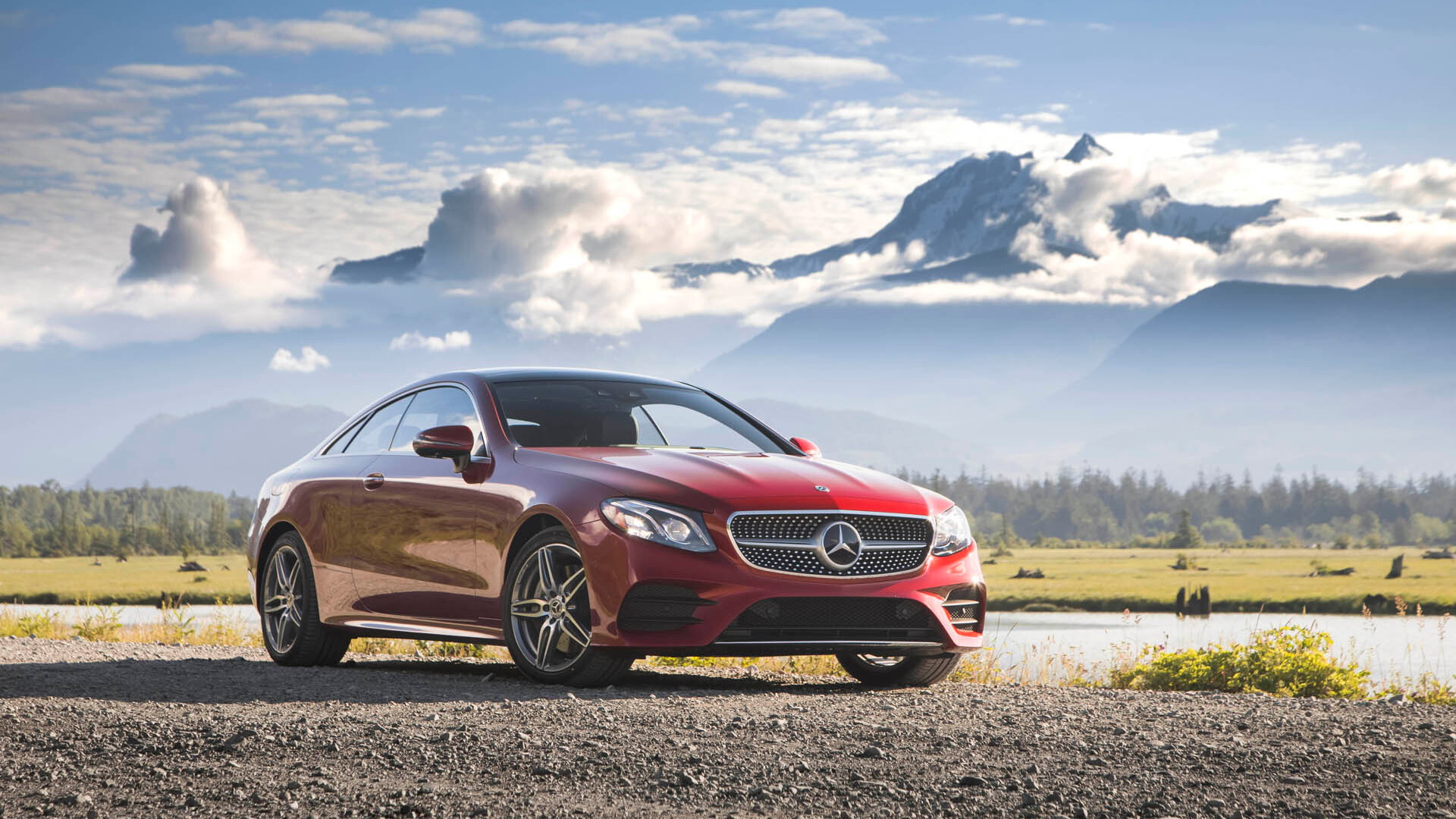 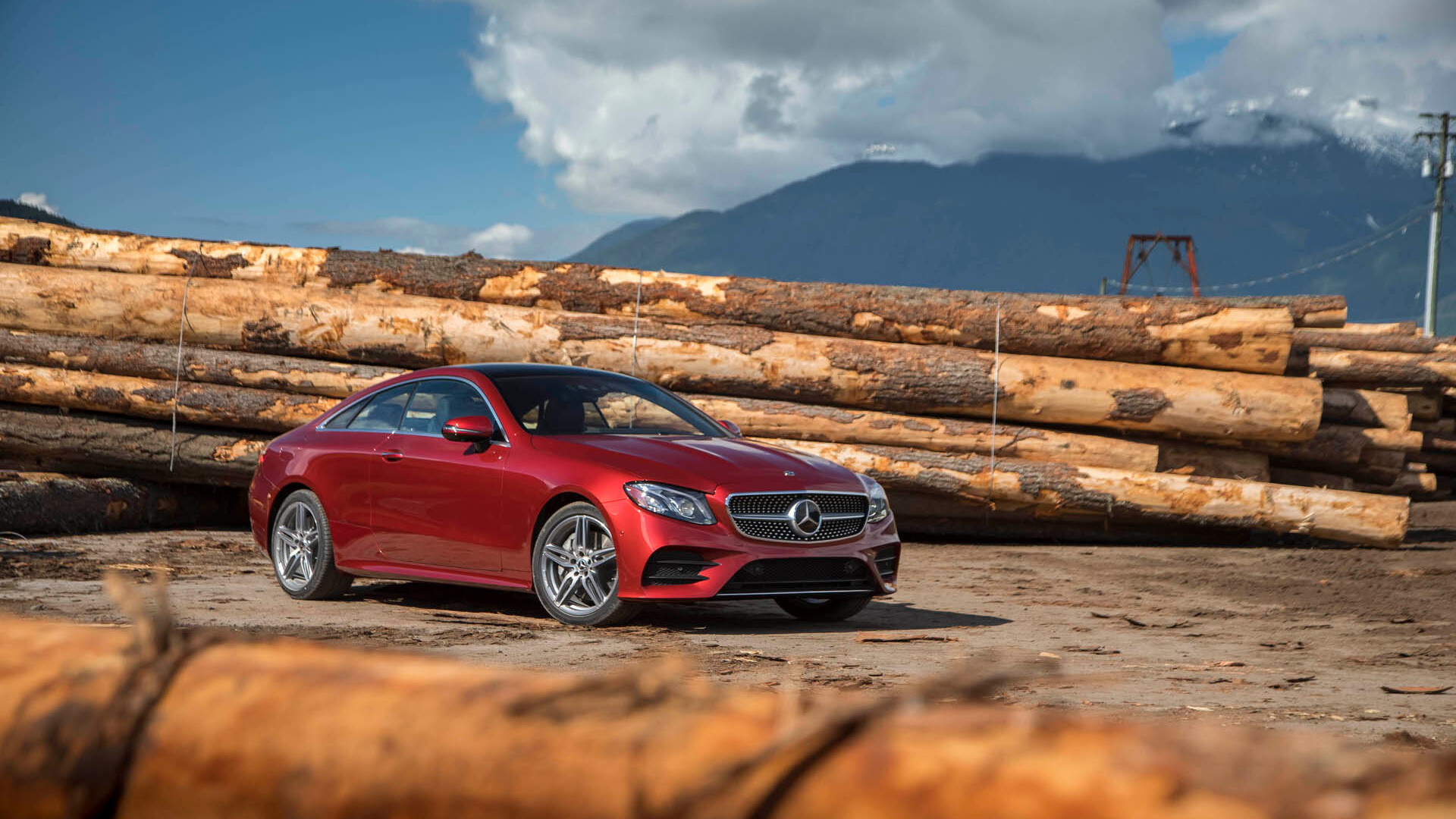 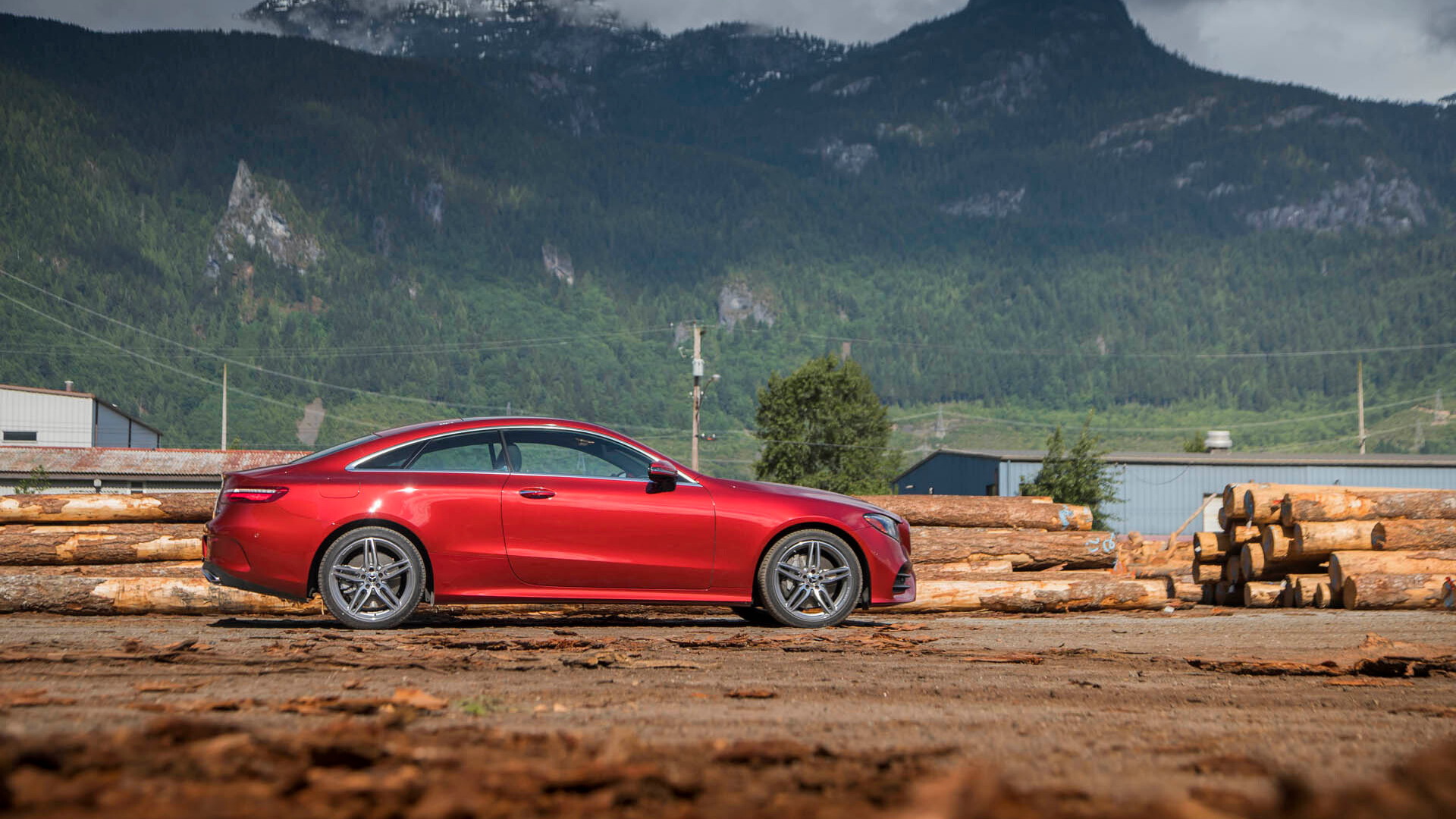 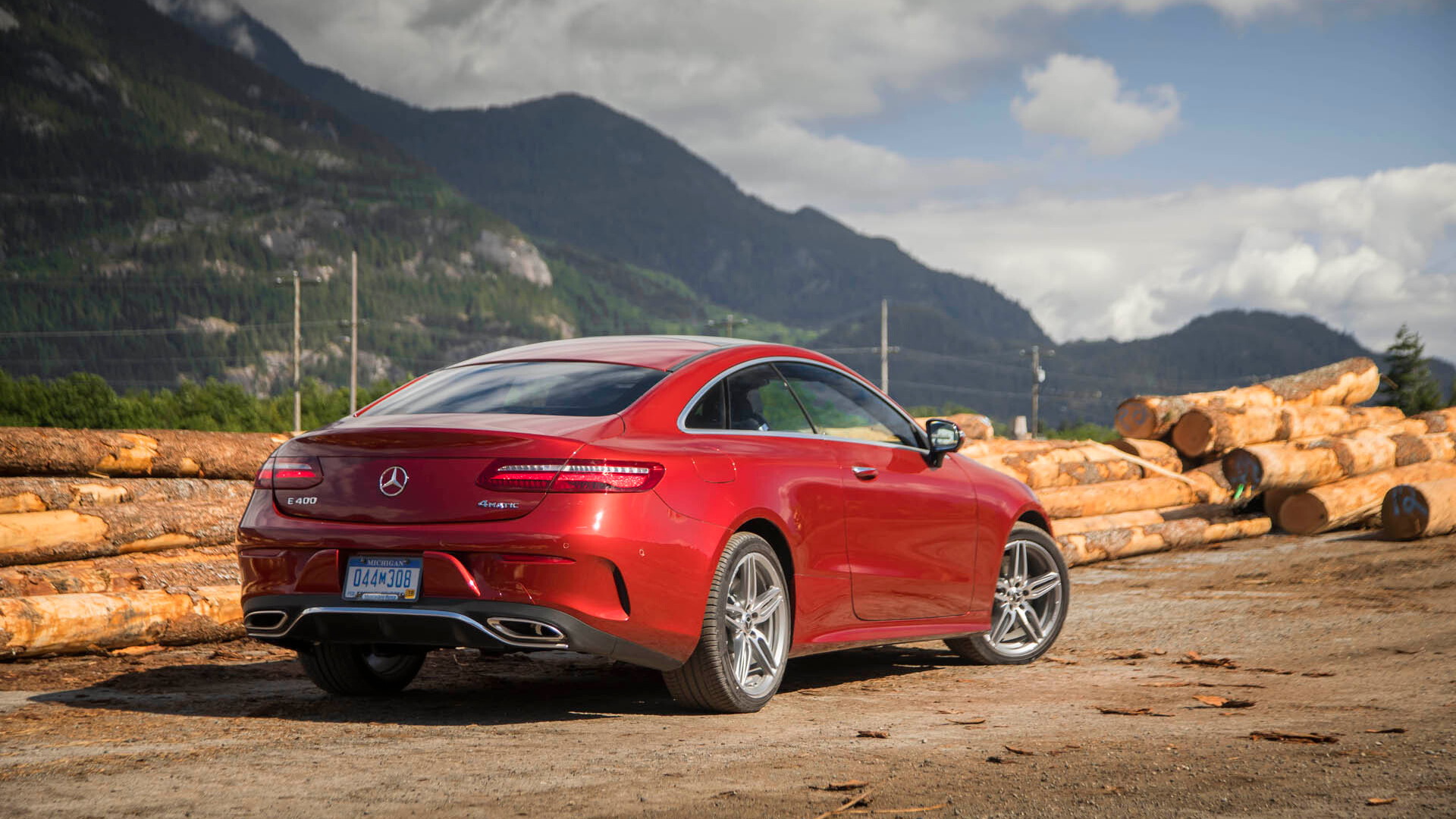 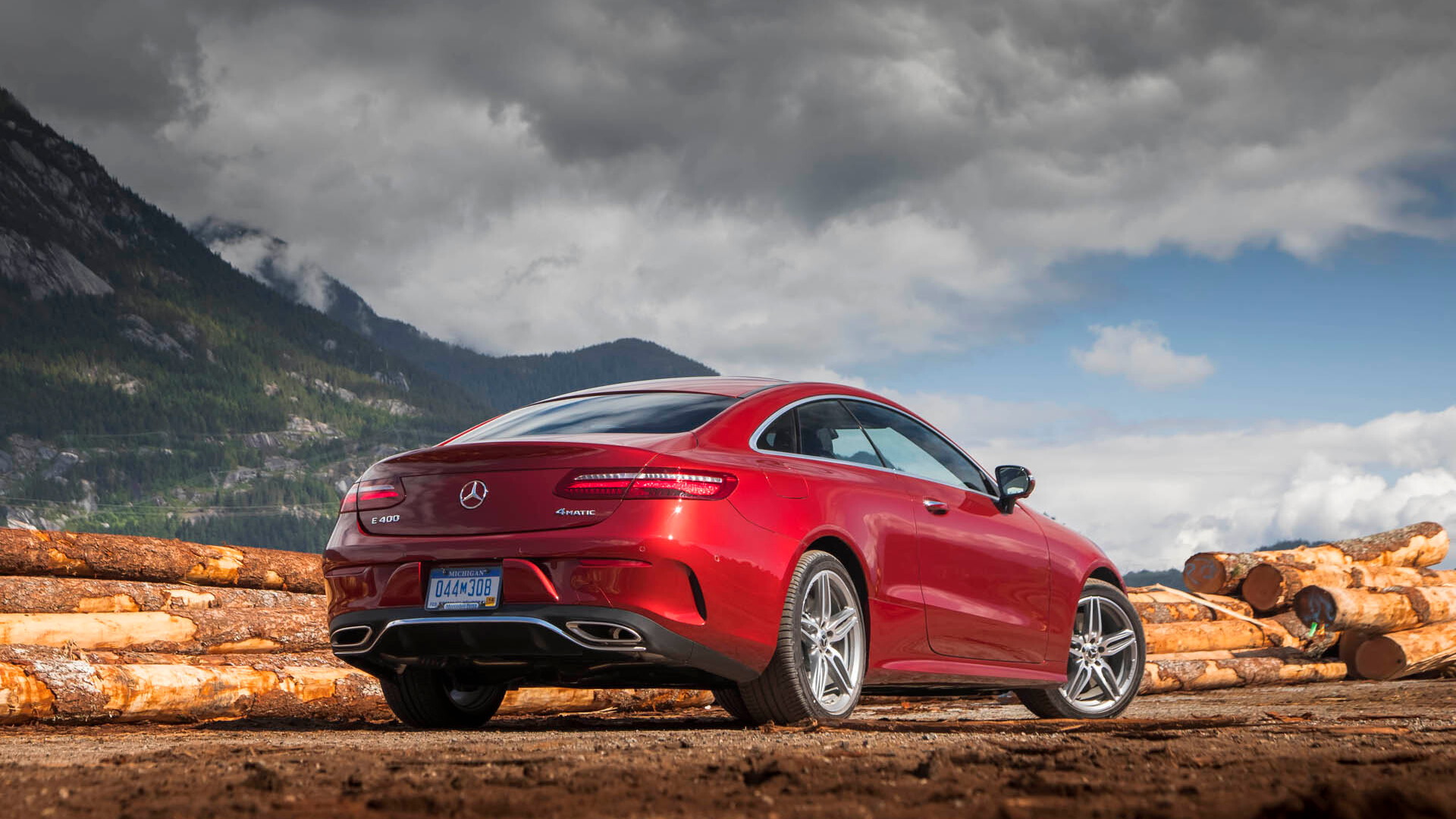 When you have an obscene amount of money, you should be driving a grand tourer. I recommend the Aston Martin DB11 or a Ferrari GTC4 Lusso. But what if you're not a sultan, an oligarch, or a tech innovator and still want what a GT can provide? You buy the 2018 Mercedes-Benz E400 Coupe.

Priced from $59,895, including a mandatory $995 destination charge, the redesigned E-Class Coupe takes all the important elements that make grand tourers so desirable—a spacious, opulent cabin; high-speed stability, comfort and agility; a stunning body, and straight-line speed—and lowers the cost of entry to something average people could at the very least aspire to.

Rule one of a grand tourer declares that it should be big in the cabin, big in the body, and big in the trunk. The 2018 E400 Coupe covers those bases.

Gone are the old model's C-Class-based underpinnings and in its place is a variant of the current E-Class sedan's underpinnings. At 190 inches long, 73.2 inches wide, 56.3 inches high, and riding on a 113.1-inch wheelbase, the E-Class Coupe is 4.8 inches longer—4.4 of those inches are between the axles—than last year's model. And yes, it's wider and lower, too, for an improved center of gravity and a more stylish stance.

The increase in size yields a larger cabin that can legitimately seat four adults without a shoehorn or much complaining—we saw a six-foot, four-inch colleague clamber in back with headroom to spare. While we doubt most E-Class Coupe customers will cram abnormally tall humans in back, they should feel comfortable using this two-door Mercedes to haul kiddies to and fro. The trunk, meanwhile, has space for a weekend's worth of bags and then some.

The E-Class Coupe's space is surprising—its interior style isn't. Aside from true exotics like Rolls-Royce and Bentley, Mercedes has built the best cabins in the business for several straight years and the E-Class sedan is no exception. While the Coupe carries over a mostly identical design, it does it with sportier materials.

A gorgeous Yacht Blue and Macchiato Beige leather scheme adds nautical flair and a distinct variety to the black, tan, and beige palette. There are also two new light wood trims, “Natural Grain” Ash or Elm, and neat turbine-shaped HVAC vents. These are very tiny changes, but they give the E-Class Coupe cabin more emotion than the occasionally cold cabin in the sedan.

The cabin's size and style define the E-Class Coupe almost as much as its open, airy nature. Like the S-Class Coupe, frameless front windows, lowerable rear windows, and a conspicuously absent B-pillar help create an amazingly open cabin, a trait the standard panoramic sunroof complements. While the weather during my test in Whistler, British Columbia didn't allow it, I expect the E-Class Coupe will give wind-in-your-hair thrills that are nearly as impressive as the upcoming E-Class Cabriolet. But the design does present problems.

The S-Class is a big enough vehicle that both the front and rear windows stow in the body seamlessly. With the E-Class, though, the rear window is so large and the wheelbase so much shorter that Mercedes' designers and engineers had to choose between lowering the whole window with a portion sticking out or simply dropping part of the window. They took option number two in this lose-lose scenario. The result is an odd looking mini pillar that splits the rear window 66/33.

Speed is just as important to a GT car as good looks and a spacious cabin. Mercedes' decision to offer its familiar 3.0-liter, twin-turbocharged V-6 as standard instead of the E-Class Sedan's base 2.0-liter, turbocharged 4-cylinder makes some sense then. Its 329 horsepower and 354 pound-feet of torque provide enough stopwatch performance—zero to 60 in a manufacturer-estimated 5.5 seconds with rear-wheel drive and 5.2 with all-wheel drive; 0.6 and 1.1 seconds faster to 60 than last year's model—but the E400 feels quicker than those numbers indicate.

The twin-turbocharged configuration is pleasantly free of lag, and with peak torque available from just 1,600 to 4,000 rpm, there's a broad, flat torque curve just waiting for a driver to exploit it. Paired with a standard 9-speed automatic that executes quick and extremely smooth shifts in all driving modes, the E400 is brisk and accessible in a straight line.

The E400 is plenty quiet, too. The V-6 sounds refined and smooth under hard throttle, but under more relaxing conditions, it changes roles and becomes a quiet, calm travel partner.

It's a similar story with the suspension, provided you order the correct one. All E-Class models get a fully independent suspension at all four corners, but the Coupe rides 0.6 inches lower than the Sedan—remember what I said about the more aggressive stance?

Along the stunning Sea-To-Sky Highway between Vancouver and Whistler, the steel springs and variable dampers offered a good balance of agility without a huge sacrifice in on-road comfort. To be frank, the standard E400 feels like a reasonably sporty luxury car, but nothing to write home about.

The optional Air Body Control system is much better. I spent my second day driving an E400 with the four-corner air suspension on a variety of roads, and it impressed in every setting.

Set to Comfort, my car stable and poised, delivering predictable behavior that rarely crept into the cabin. I'd go so far as suggesting you spend all your time in Comfort—it's that quiet, composed, and (um) comfortable, even on pockmarked and frost-heaved roads.

Save Sport for your favorite on-ramp or the long, winding way home from work. It's appreciably firmer and more sporting, but it can still handle rough sections of road without loosening your fillings. Sport + grows on the previous mode, delivering an even firmer, more aggressive ride, but the improved handling isn't worth the sacrifice in ride quality—you could drive all day in Sport, but you won't want to in Sport +.

While each setting increases the E400's willingness to corner and its turn-in aggression—and if you're using the pre-set Dynamic Select drive modes, they also increase transmission shift speed, steering weight, and throttle response—to the point that this Mercedes feels smaller than it really is. That's a big change from last year's model, which felt cumbersome and dimwitted in most situations.

Unfortunately, none of the new E400's modes can do anything to address the its willingness to roll. Hopefully Mercedes adds some stiffer sway bars for the inevitable AMG E43 Coupe.

The E400 really is a remarkable grand tourer. But it's not without problems. For one, those beautiful frameless windows do a lousy job at preventing wind noise at anything above 50 miles per hour. I'd also like a wider range of adjustability on the seats—yes, you can adjust the lumbar and side bolsters, and there's an extendable leg support as well as a massaging function, but the simple range of up/down and fore/aft adjustability on the driver's seat could be greater. Remember, GTs need to be able to cover hundreds of miles in a single go, and you can't do that if you can't get comfortable.

Finally, I had a real sense of tech overload while behind the wheel. There's so much technology in this car, from the reconfigurable gauge cluster to the new touch-capacitive swipe buttons on the steering wheel to the fan-freaking-tastic semi-autonomous system that it's occasionally hard to grapple with. Keep two things in mind, here. First, a 32-year-old technophile with a disturbing habit of impulse buying new gadgets is complaining about the amount of tech in this car. And second, the average Mercedes-Benz customer is well over 50 years old.

Mercedes-Benz hasn't released the full pricing information on the 2018 E400 Coupe, but the monroney labels for the test models paint a fairly thorough picture.

Prices for the rear-drive model start at $59,895, including a mandatory $995 destination charge. All-wheel drive adds $2,500 to the price tag. On the cars I tested, available paint options range from $720 to $1,080 while upgrading the wood trim adds up to $1,300 if you go with the handsome Designo stuff. The stylish two-tone upholstery schemes—Macchiato Beige with either Yacht Blue or Espresso Brown Nappa leather—cost $1,370, while the Designo leather costs $4,200.

Mercedes only optioned the test vehicles with the top-of-the-line Premium 3 Package. The $9,350 package adds loads of equipment, including the E400's entire suite of semi-autonomous and active safety systems, along with push-button start, navigation, a 12.3-inch digital instrument cluster, and automatic headlights. The other two high-dollar options—Air Body Control and a Burmester 3D surround audio system—demand $1,900 and $5,400, respectively. Along with some other smaller, three-figure options, the total cost for my Emerald Green Metallic tester was $89,985!

That's a lot of money. But it's completely worth it. I drove the E400 Coupe on smooth, high-speed coast highways and rough, bumpy river-side roads, through sleepy Canadian towns and in congested Vancouver traffic, and in calm, clear weather and driving rain—in every situation, it performed with the poise, comfort, and style of grand tourers costing two or three times as much. The 2018 Mercedes-Benz E400 Coupe is not an affordable car, but if you want to own a vehicle that is the definition of a grand tourer, spending $90,000 is a value.