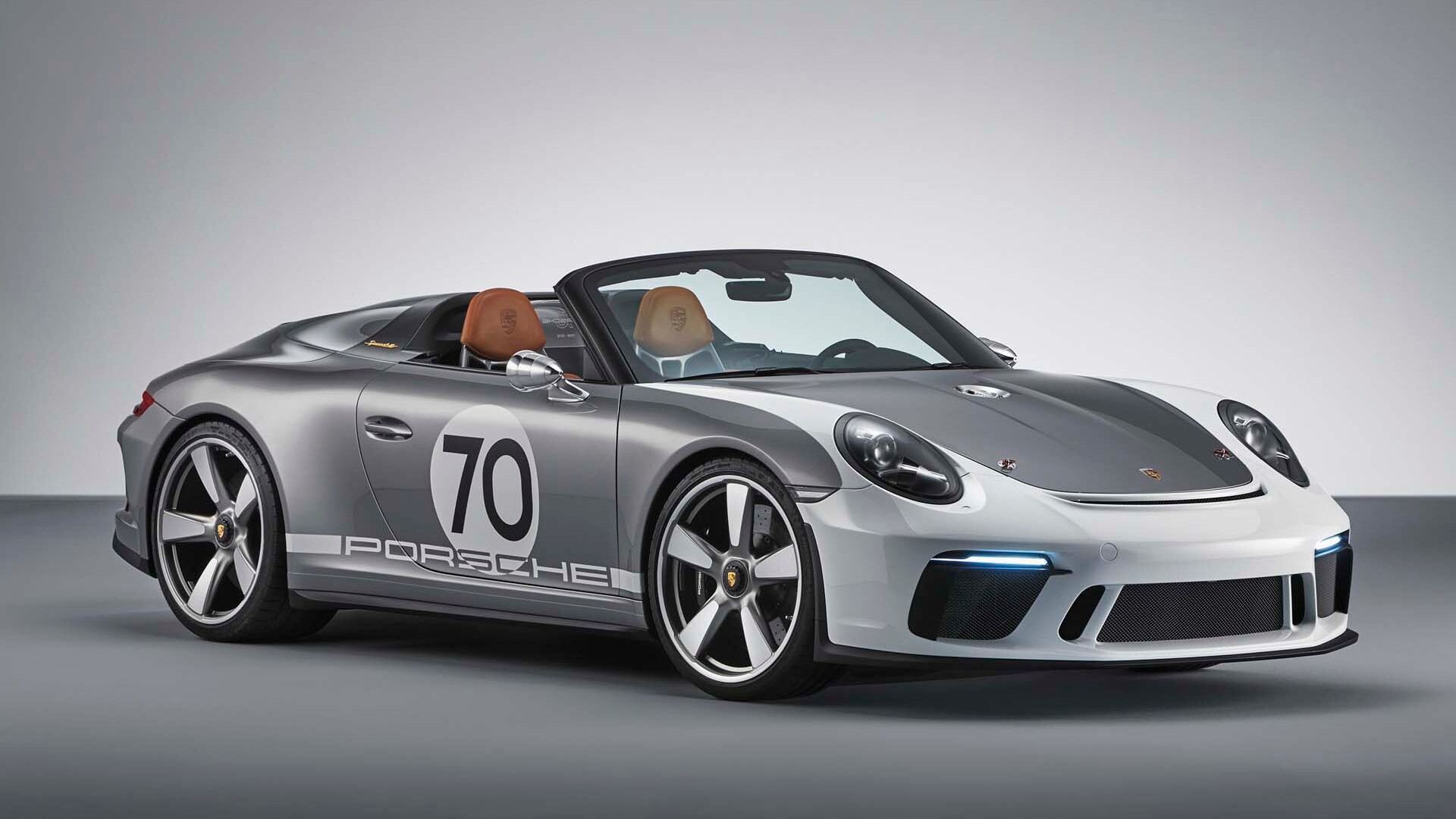 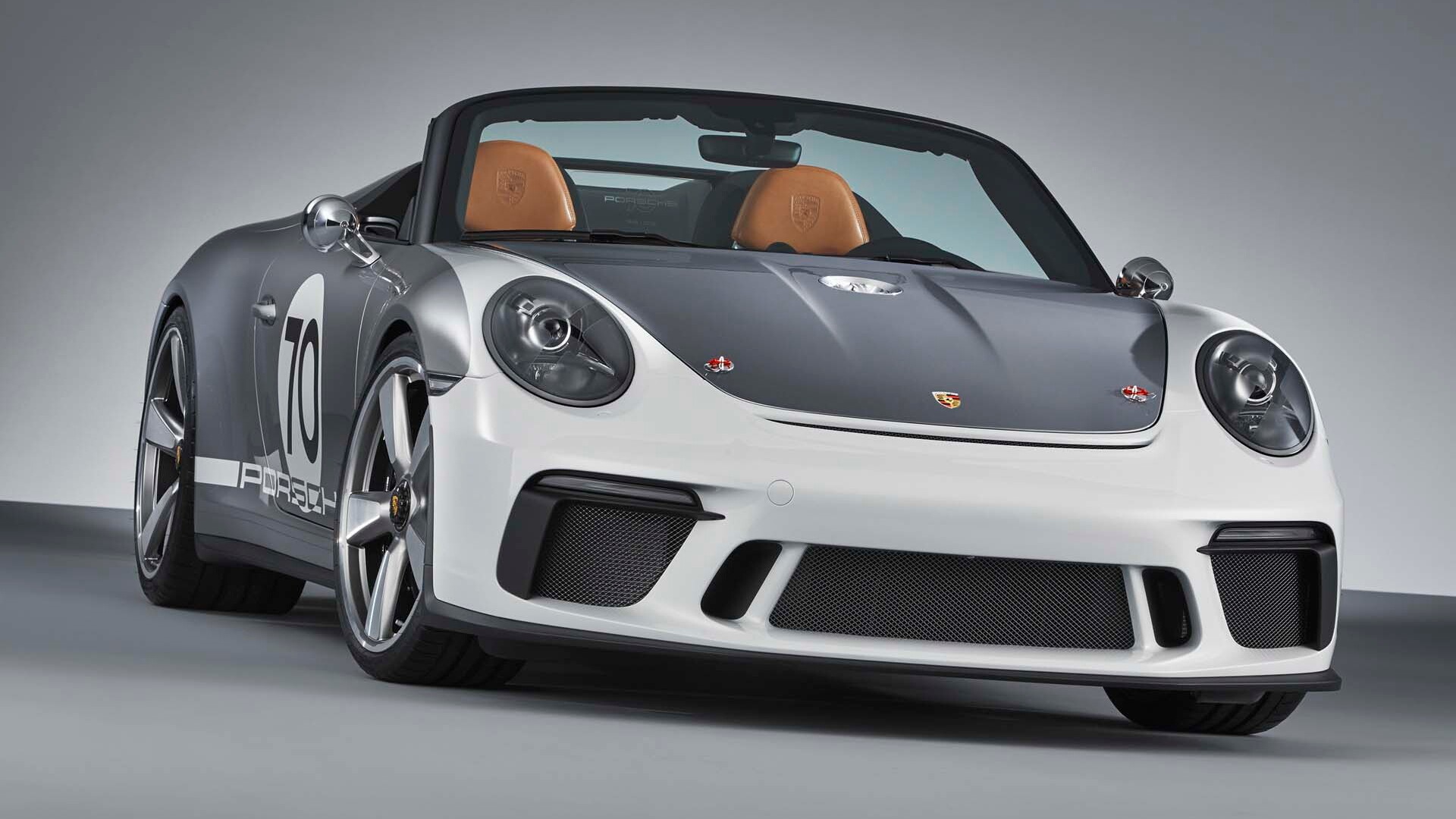 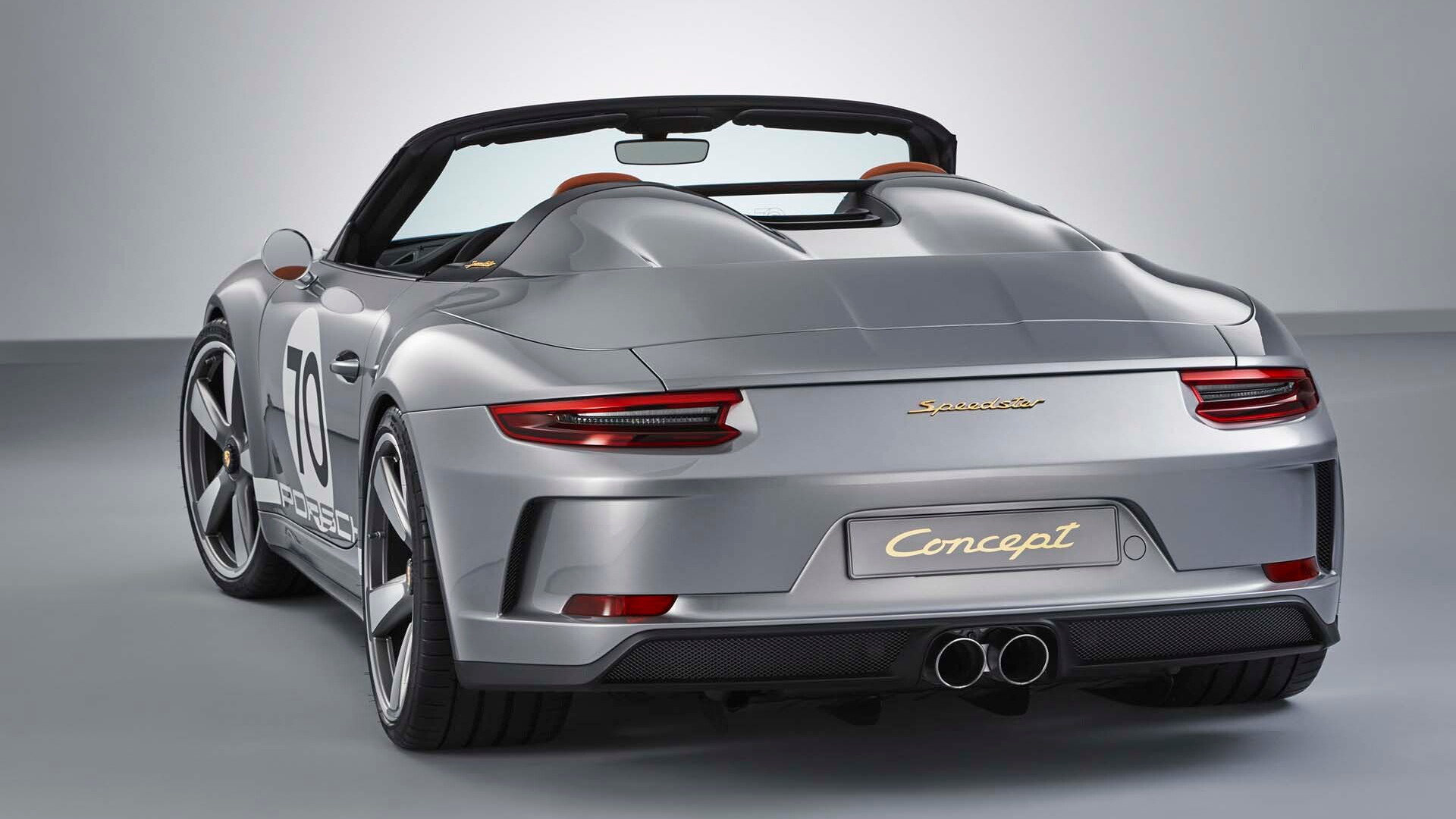 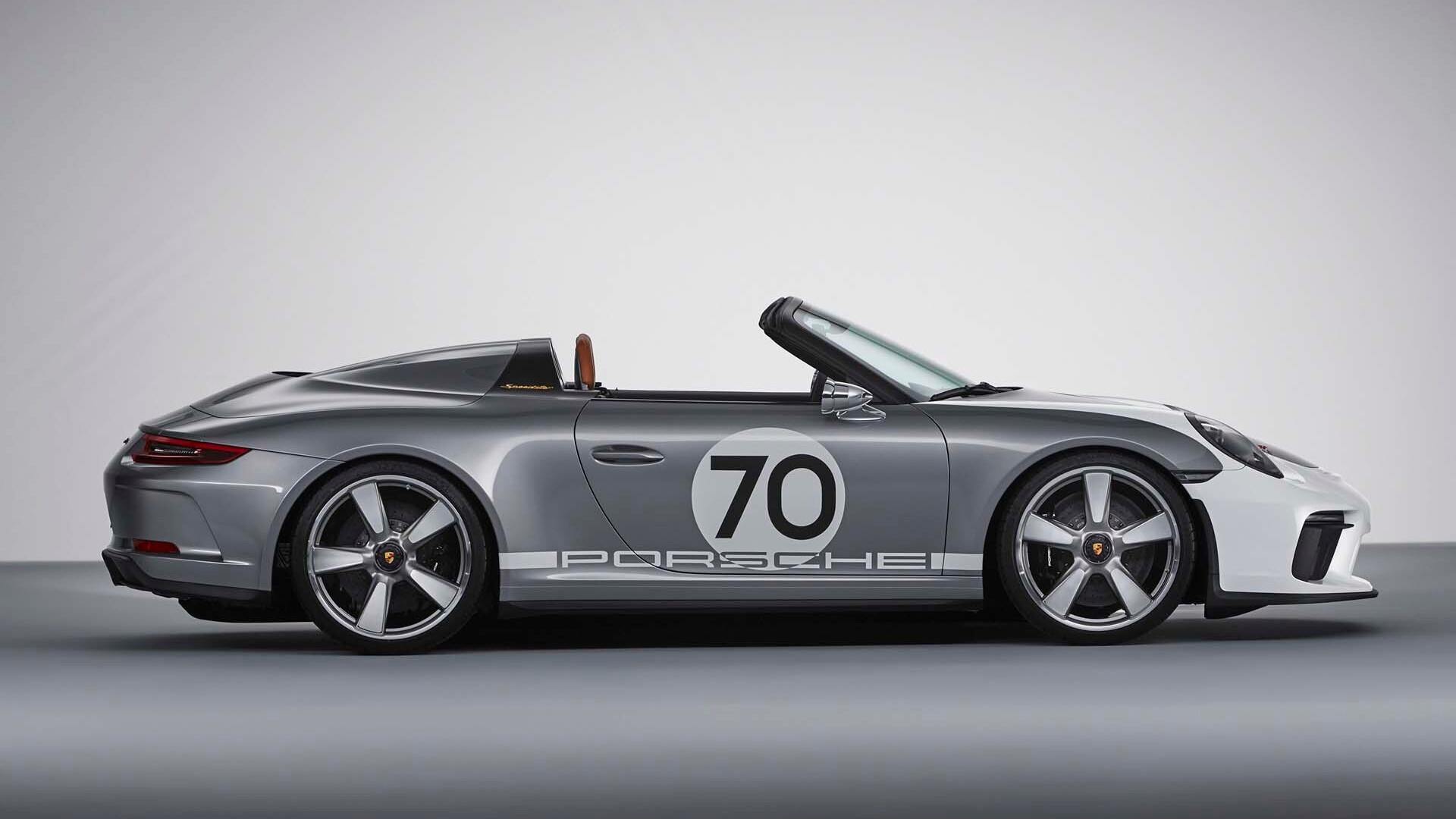 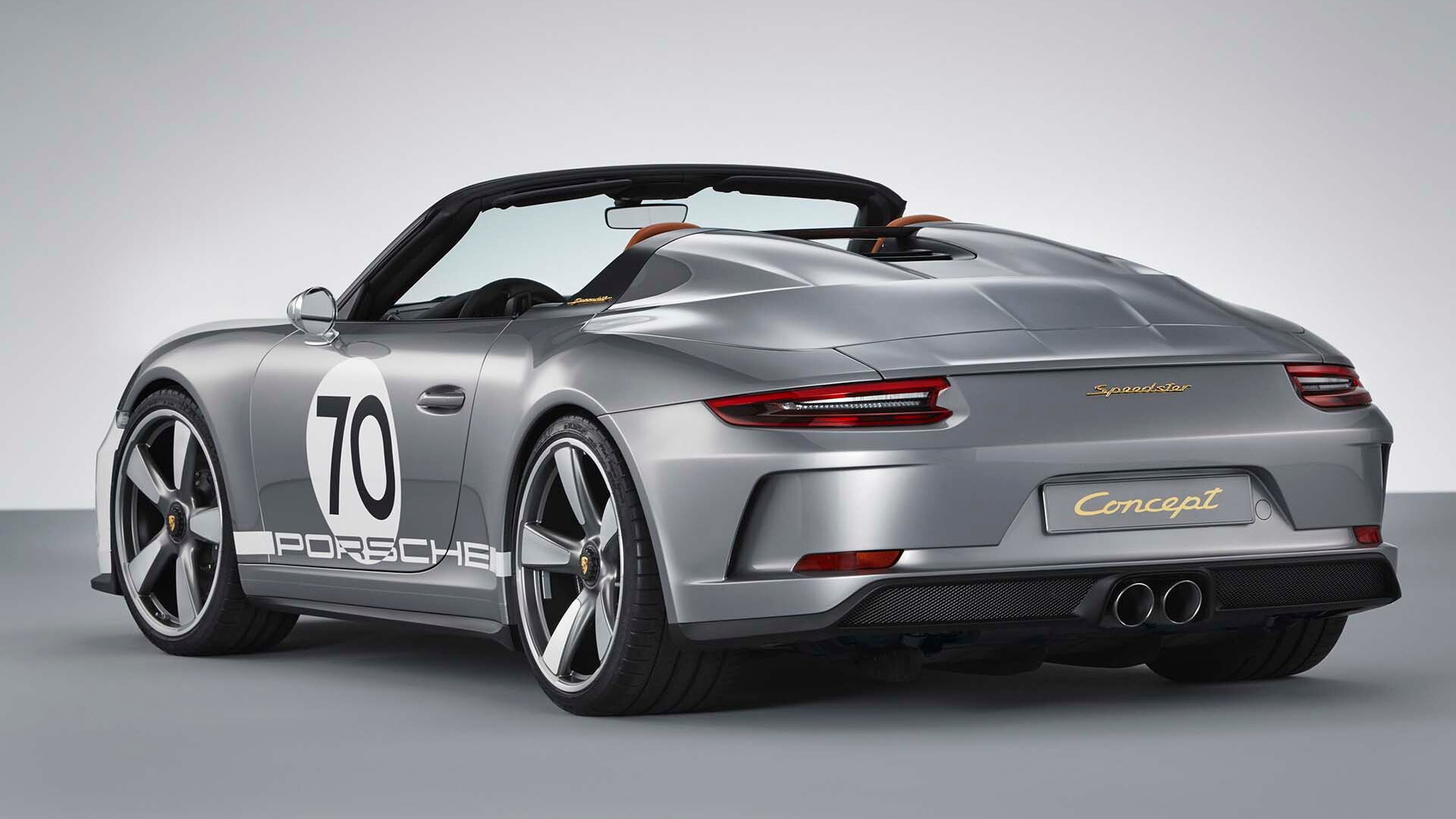 On June 8, 1948, the first Porsche 356 Roadster received its operating permit. Porsche celebrated that milestone Friday with a "70 years of Porsche Sports Cars" event in Stuttgart-Zuffenhausen, Germany.

And what better way to link to the past than to reveal a concept car that pays homage to that original roadster as well as the various 356 and 911 Speedster models over the years?

Like previous Speedsters, the Concept has a shorter windshield. It is tilted at a steeper angle, which leads to shorter side windows as well. Perhaps the most notable design element is the pair of nacelles—Porsche calls them streamliners—on the special carbon-fiber rear deck; they cover the rollover bars as they flow from behind each seat in all of their aerodynamic glory. Contrasting black slats between the nacelles add visual interest and another aerodynamic element. The car also has a transparent Plexiglas wind deflector with an etched "70 years of Porsche" logo.

The Speedster started as a 911 Carrera 4 Cabriolet, and its fenders and front trunk lid have been replaced with carbon-fiber-reinforced plastic (CFRP) components. The two-tone GT Silver Metallic and White paint is a nod to Porsche's early racing colors. Other blasts from the past include the 1950s-style central fuel tank cap on the front trunk lid, the classic Talbot-shaped exterior mirrors, and the "X" shapes in the headlights, which came from early motorsports. Milled, gold-plated Speedster lettering adorns the B-pillars and rear fascia.

When the car is parked, a tonneau cover protects the interior instead of a convertible top.

Inside, the Speedster features several weight-savings measures. The seats have CFRP frames, and the radio, navigation screen, and air conditioning system have all been left out—less is more, in Porsche's world. Cognac Brown leather upholstery also recalls Speedsters of the past.

The suspension comes from the 911 GT3, and the car rides on 21-inch Fuchs-style wheels with center locks.

The engine was prepared by the Porsche Motorsport Center in Weissach. It's a naturally aspirated flat-6 that revs to 9,000 rpm and makes more than 500 horsepower.

Porsche hasn't said if it will build the 911 Speedster Concept, but it looks like a distinct possibility. The last 911 Speedster was offered in 2010 as part of the 997 generation. A Speedster version would be a great way to close out 991 generation, which is set to be replaced soon, and we have seen spy shots of a 991-generation Speedster roaming the streets.

For buyers, this blast from the past could be a real investment for the future.