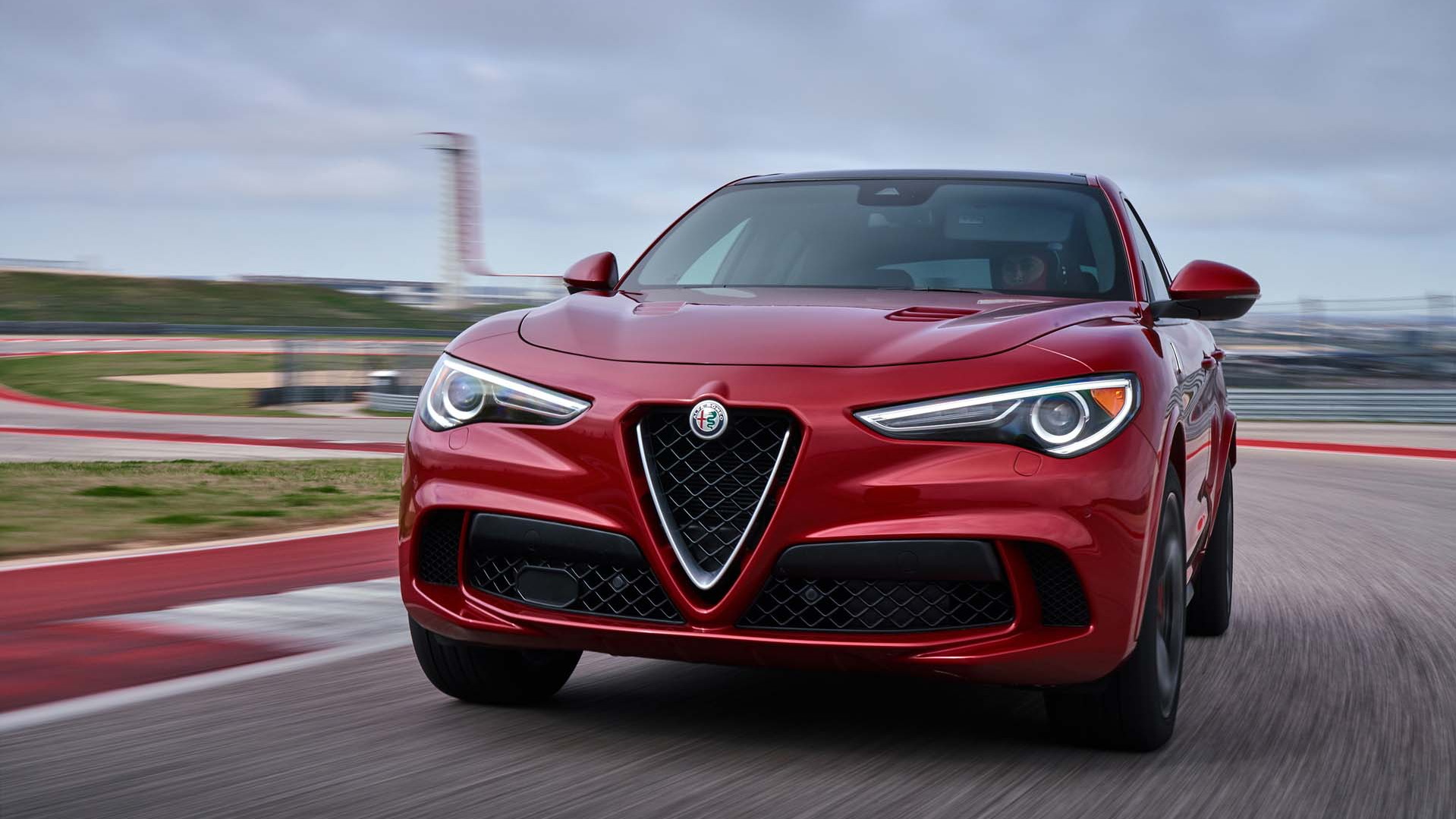 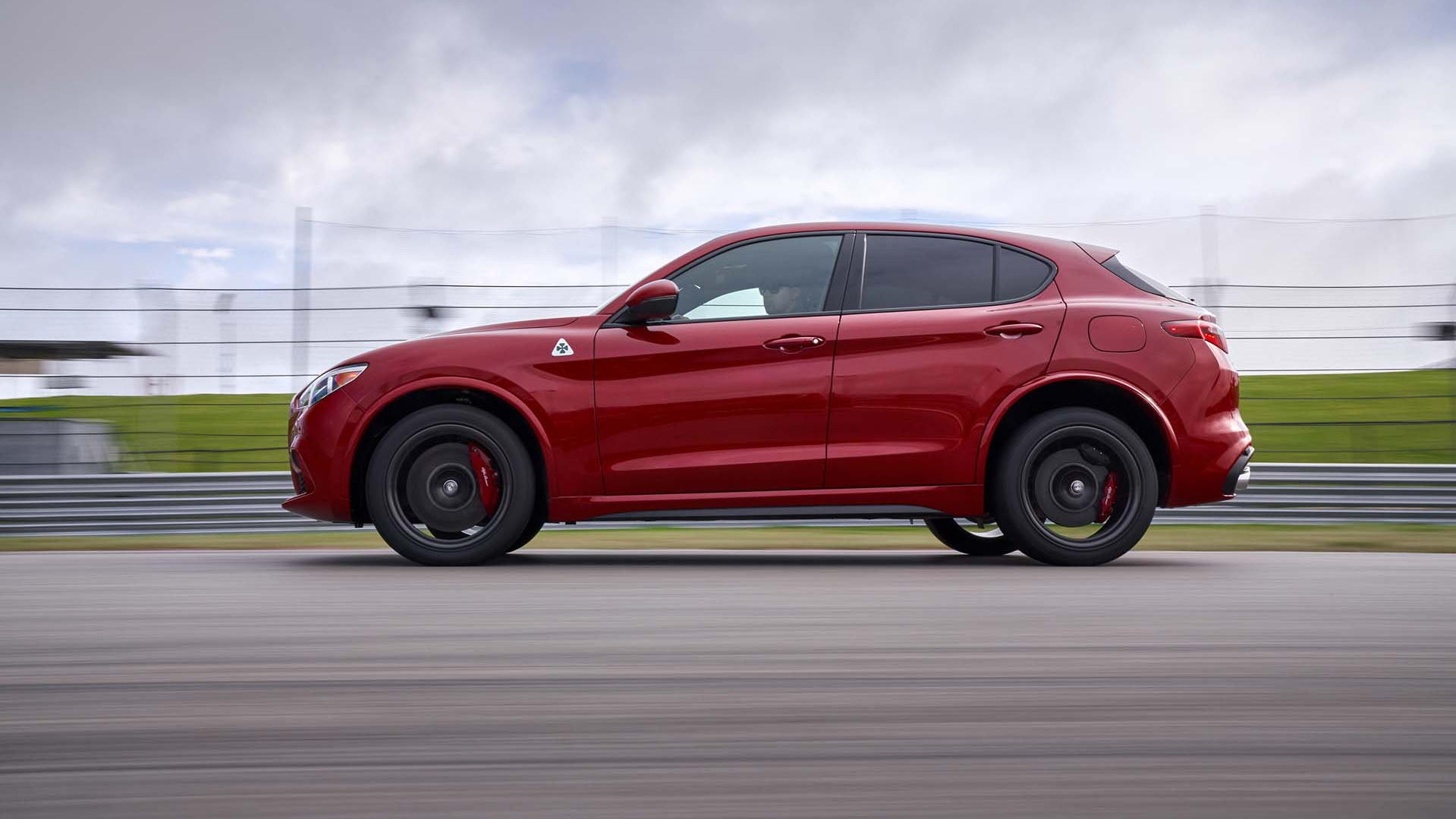 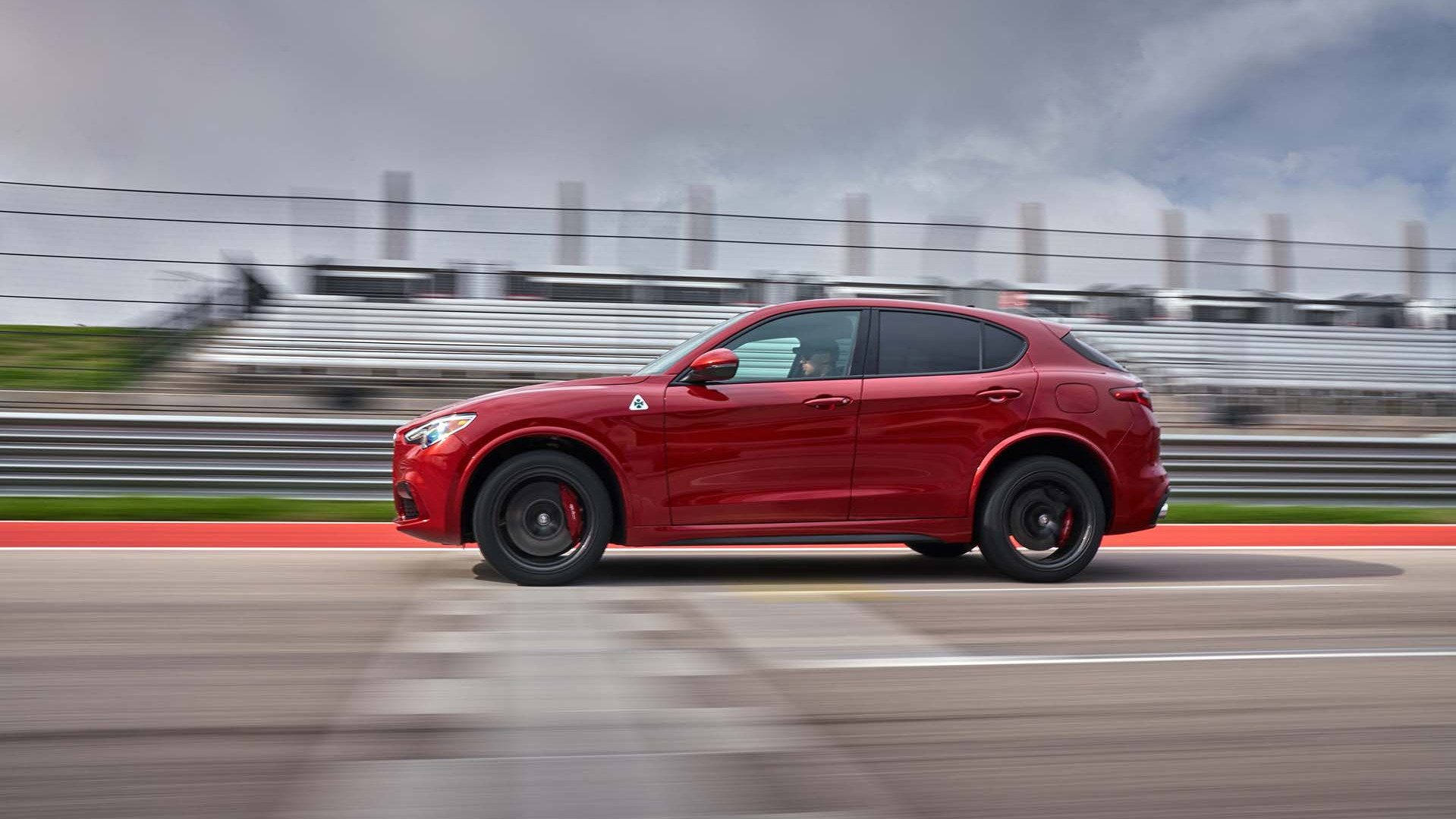 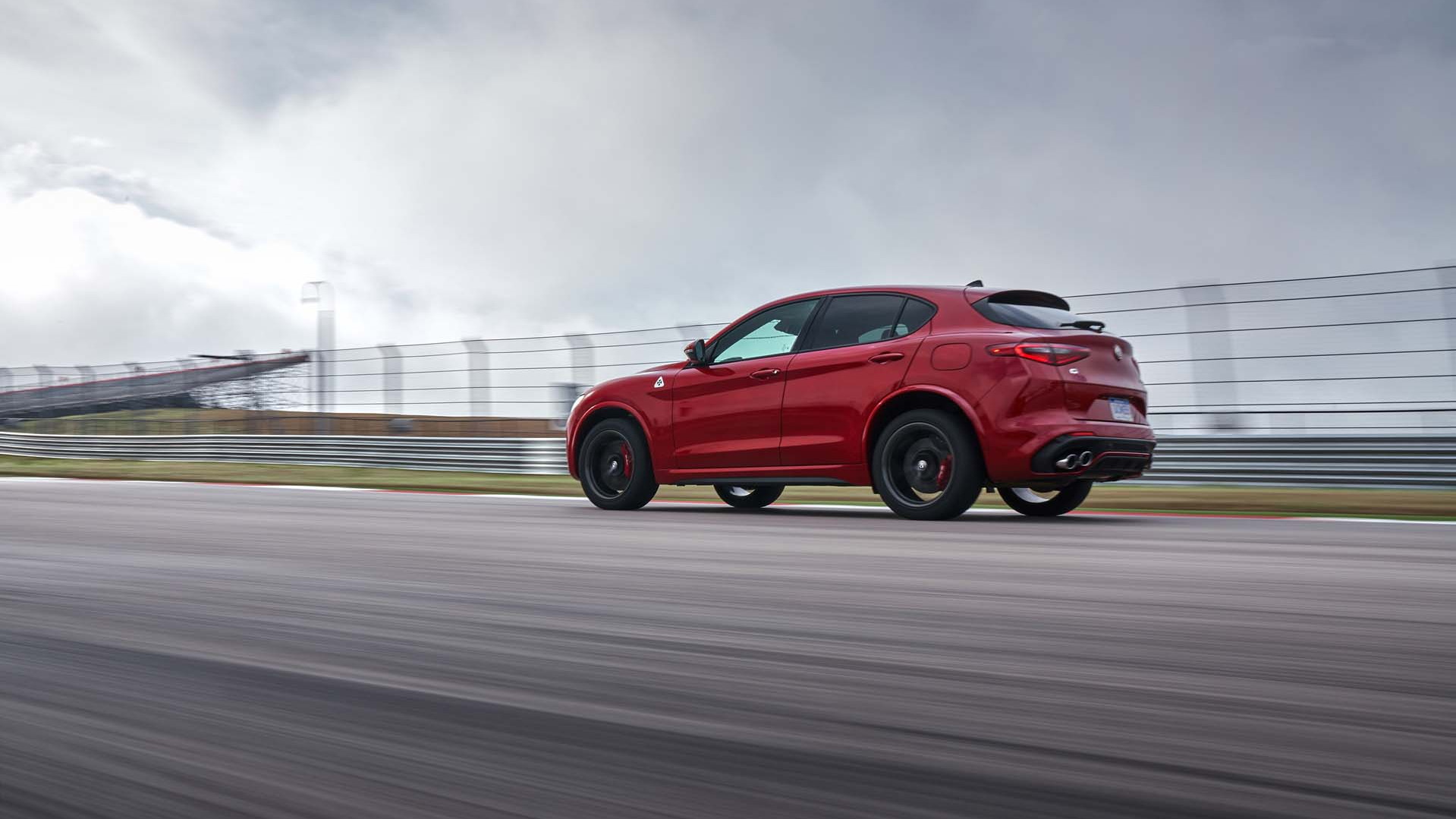 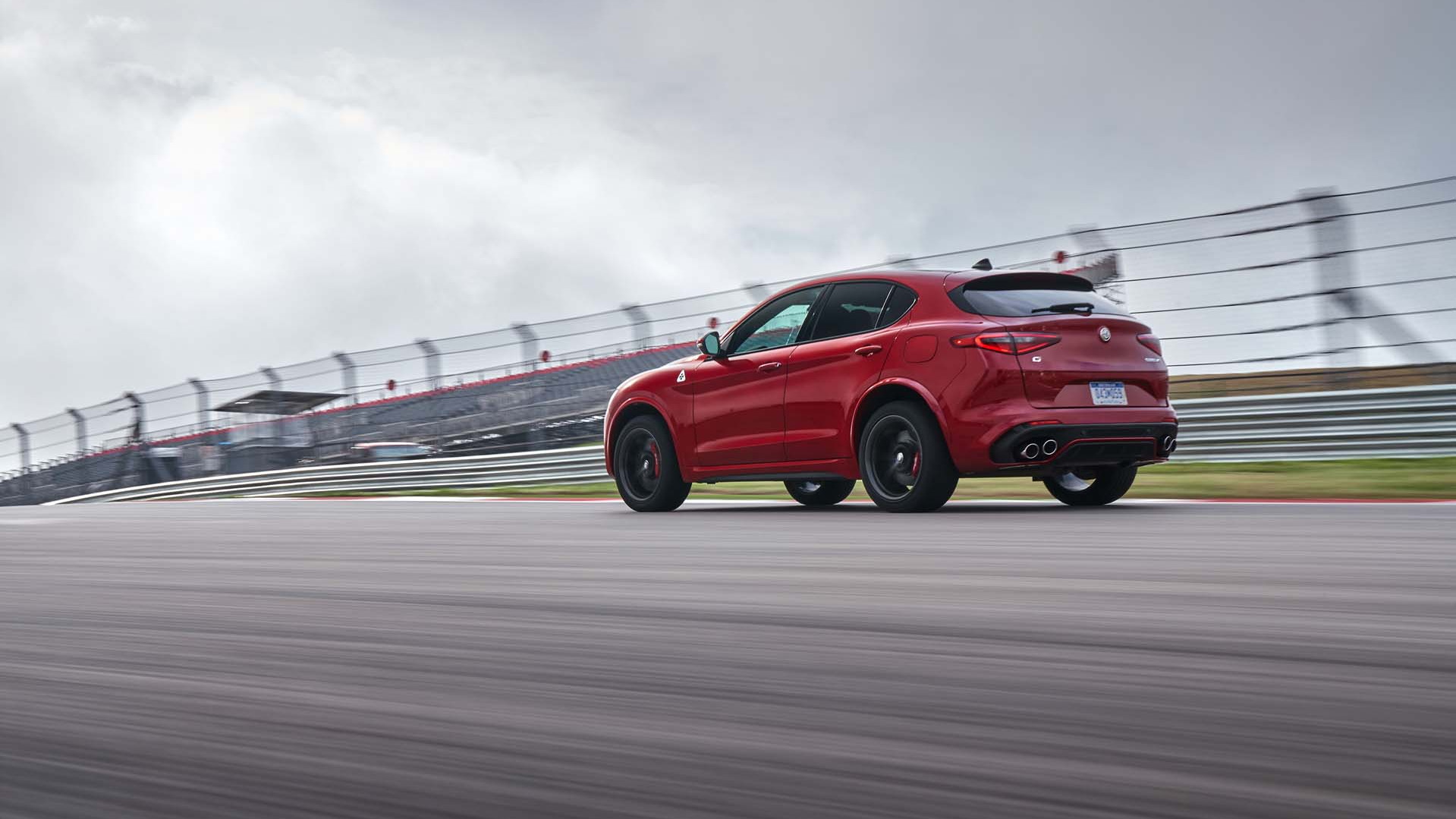 That message flashes across the instrument cluster after I twist the drive mode selector past Dynamic and into Race in the 2018 Alfa Romeo Stelvio Quadrifoglio. I dutifully oblige, slotting the electronic shift lever left from Drive and into manual mode as I roll out of the long Formula One-spec pit lane at the Circuit of the Americas outside Austin, Texas.

At the staging area near pit out, I come to a stop, waiting on the signaler to clear me. I double check my seating position in the mostly manual, carbon fiber-backed Sparco seats, and adjust my grip on the leather and Alcantara-wrapped steering wheel so my index fingers can easily reach the large, metal, column-mounted paddle shifters.

The Stelvio Quadrifoglio is, like the 4-cylinder crossover it’s based on, a vehicle that prioritizes driving over, and at the expense of, all else. It’s one of the best premium crossover SUVs out there. And in a few important ways, one of the worst. In short, it’s a pure-bred Alfa Romeo.

The uphill exit from the pits and my own hamfistedness mean I’m not hitting 60 mph in 3.6 seconds—the Stelvio Quad’s official time—but I’m accelerating quickly, with 505 horsepower and 443 pound-feet of torque doing their best to overwhelm the Pirelli tires. Thanks to the Stelvio’s standard all-wheel-drive system, motion, G forces, and a delicious symphony from the quad-tipped exhausts replace the drama of hard acceleration that comes with the Giulia Quadrifoglio.

Alfa’s 2.9-liter, twin-turbocharged V-6, a modified Ferrari California T engine, is a perfect companion to this all-wheel-drive system. It can transfer up to 100 percent of the torque to the rear axle or up to 60 percent to the front. This variability tames the aggressive throttle tip-in and the V-6’s early torque delivery, so instead of having to balance the throttle and interpret rear-axle grip, there’s no thought required when going wide-open in the Stelvio.

COTA’s first sector stresses the Stelvio’s standard three-mode adaptive dampers as they attempt to manage the 4,367 pounds of Italian crossover sloshing about. Alfa ties the damper mode to the four drive modes—Dynamic, Natural, Advanced Efficiency, and Race—with Dynamic going for the middle ground and Race using the firmest setting. The driver can overrule these defaults in the performance-focused modes, and drop a level for improved ride comfort.

On public roads, the Stelvio Quadrifoglio is certainly more comfortable than the Giulia, owing to the additional suspension travel inherent in a crossover SUV. But it doesn’t give up much capability on the track, where even Dynamic’s default mode manages body motions well.

Still, the Stelvio rolls more than the Giulia, but short of especially dim-witted steering inputs the body motions are progressive and predictable. The weight distribution is perfect, and the Stelvio rotates willingly but slowly, defaulting to understeer in most circumstances.

I negotiate the tight left hander that leads onto the long back straight, rolling onto the throttle and enjoying the sensation as the 2.9-liter V-6 and torque-vectoring limited-slip differential fire me down the back straight.

The upshifts from the 8-speed automatic transmission are lightning fast and like the Giulia Quadrifoglio, the acoustic fireworks are the thunder to the accelerative lightning.

I’m nudging past 135 mph, but the Stelvio is nervous, the 12:1 steering rack amplifying each steering input. It’s the only fault in what’s otherwise a very enjoyable steering rack.

When I pass under the pedestrian bridge that crosses the track, I’m at 140 mph. A few more seconds, and I stand on the carbon-ceramic brakes to bleed speed before a sharp left.

All four of the track Stelvios on hand wear the larger carbon-ceramic brakes, an $8,000 option that increases the rotor sizes slightly at all four corners.

On public roads, the electric brake pedal is lousy—tip-in is difficult and the pedal is hard to modulate at low speeds, just like the standard Stelvio. But on the track, it all feels more progressive, while the stopping power itself is immense, easily hauling the Quad down to a reasonable speed under just 75-percent braking.

The weight transfer under this hard braking is predictable—there isn’t a lot of suspension dive, but the front tires still struggle with the sudden weight. The quick steering suddenly raises its head again as the Stelvio squirrels, and I fight to keep facing straight. Despite the heavy braking, the pedal feels consistent and reliable with no signs of fade. The carbon-ceramics do tend to squeal on pit entry, though.

The Pirelli tires and suspension provide a good barometer of grip through COTA’s technical final third and the high-speed, three-turn neck stretcher at its heart.

I approach the entrance to this section under hard throttle and lift off as I turn in, shifting some of the weight towards the front axle to help the Stelvio turn in a little quicker. The throttle is aggressive, but it’s easy to modulate—backing off quickly doesn’t upset the balanced Stelvio.

Approaching the second apex, the suspension’s movements ripple through the chassis and I adjust my steering angle to shift some of the weight off the overburdened driver’s side.

Following the second apex, I add throttle to exploit the leftover performance in the Pirelli tires as the bend starts to unwind. The understeer that follows is not only easy to predict, but it’s a good thing at this point. I’m aimed towards the exit cone and carrying plenty of speed.

The steering is a joy through this section—not to mention the rest of the lap. Its impossibly quick ratio is fast in the Giulia, and feels almost frantic in the Stelvio. But while its speed and directness takes some adjusting to, the quick-twitch behavior is addicting. It’s what allows me to make adjustments during these fast corners with tiny changes in the steering angle.

I ended each stint with a one-lap cooldown, which I usually spent thinking about how the Stelvio Quadrifoglio falls short.

The vehicles I sampled were production spec, but they were among the very first off the line. During the on-road drive earlier in the day, wind noise was a constant companion. When I raised a concern with the folks from Alfa, I was told the team in Italy was putting cars through the wind tunnel trying to come up with a solution. That said, the wind tunnel probably won’t fix the window seals around the A- and B-pillars. My tester’s seals created a lot of noise, to the point that I had to double check that the windows were closed.

MUST READ: Alfa Romeo Stelvio Quadrifoglio the fastest SUV around the ‘Ring

The Stelvio Quadrifoglio gets a number of interior upgrades over the base model, and they’re all quite nice. The carbon-fiber trim is lovely, and the main driver interfaces—a thick-rimmed steering wheel with leather, Alcantara, and carbon fiber, more aggressive seats, and large metal paddle shifters—are excellent, but there are plenty of disappointing plastics on the doors and the lower elements of the dash.

These are barely passable on a $45,000 crossover, but my tester rung up at just north of $83,000, and there are a lot of vehicles that offer 75 percent of the Stelvio’s driving dynamics and 150 percent of its refinement for the same money.

Prepare to wrestle with this conundrum in the showroom. The Stelvio Quadrifoglio is so, so charming, easily the most likable crossover SUV on the market, not to mention the most dynamically capable. On the track, this $80,000 crossover is a steal at half the price.

But as a luxury crossover SUV, it’s a much more difficult vehicle to recommend. Whether the Stelvio Quadrifoglio will work for you will depend on why you’re buying—if you want the best performance SUV on the market, this is the car for you. But if you want a luxury vehicle that can occasionally tickle your performance sweet tooth, there are vehicles that are far better balanced.