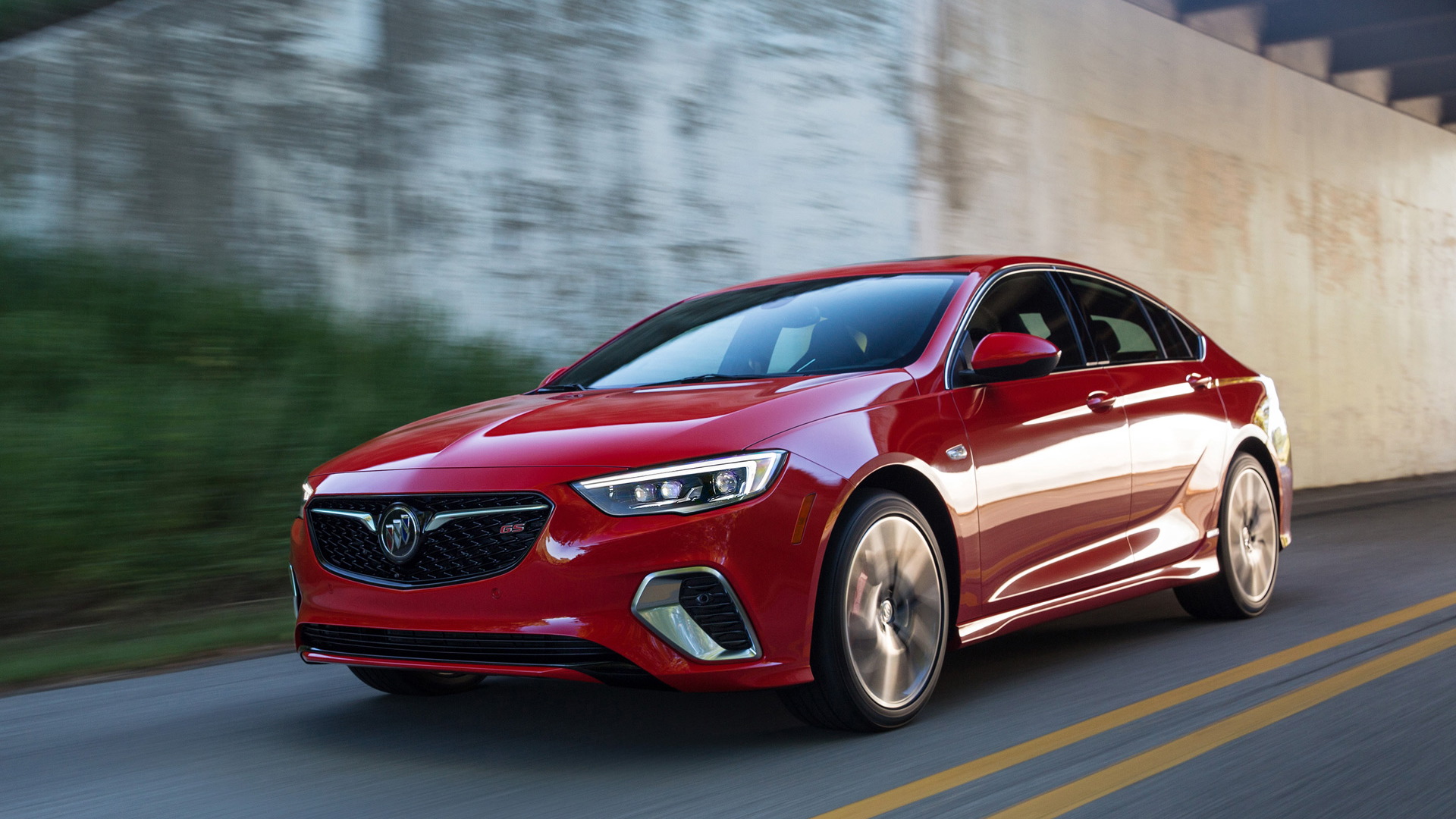 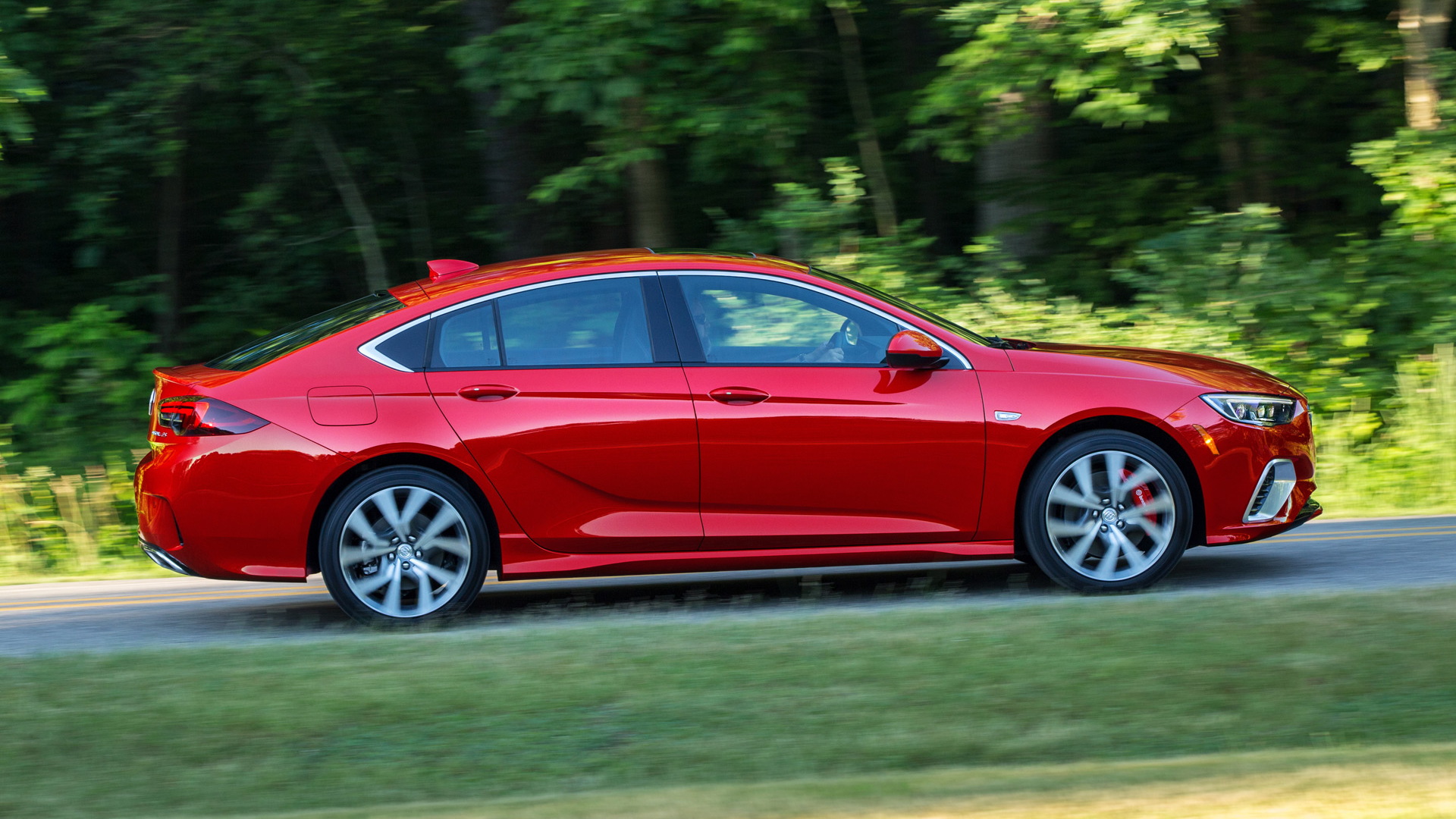 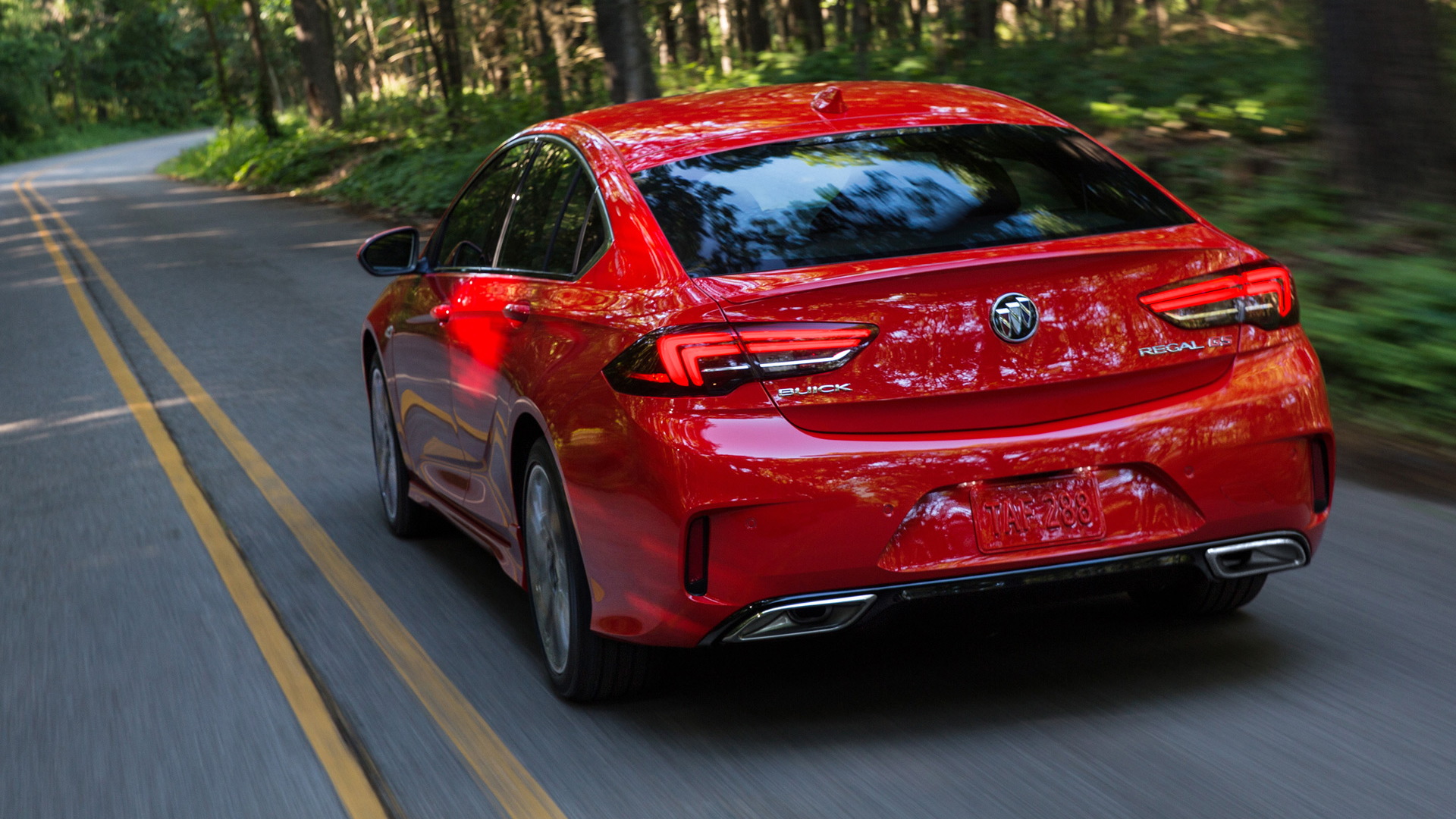 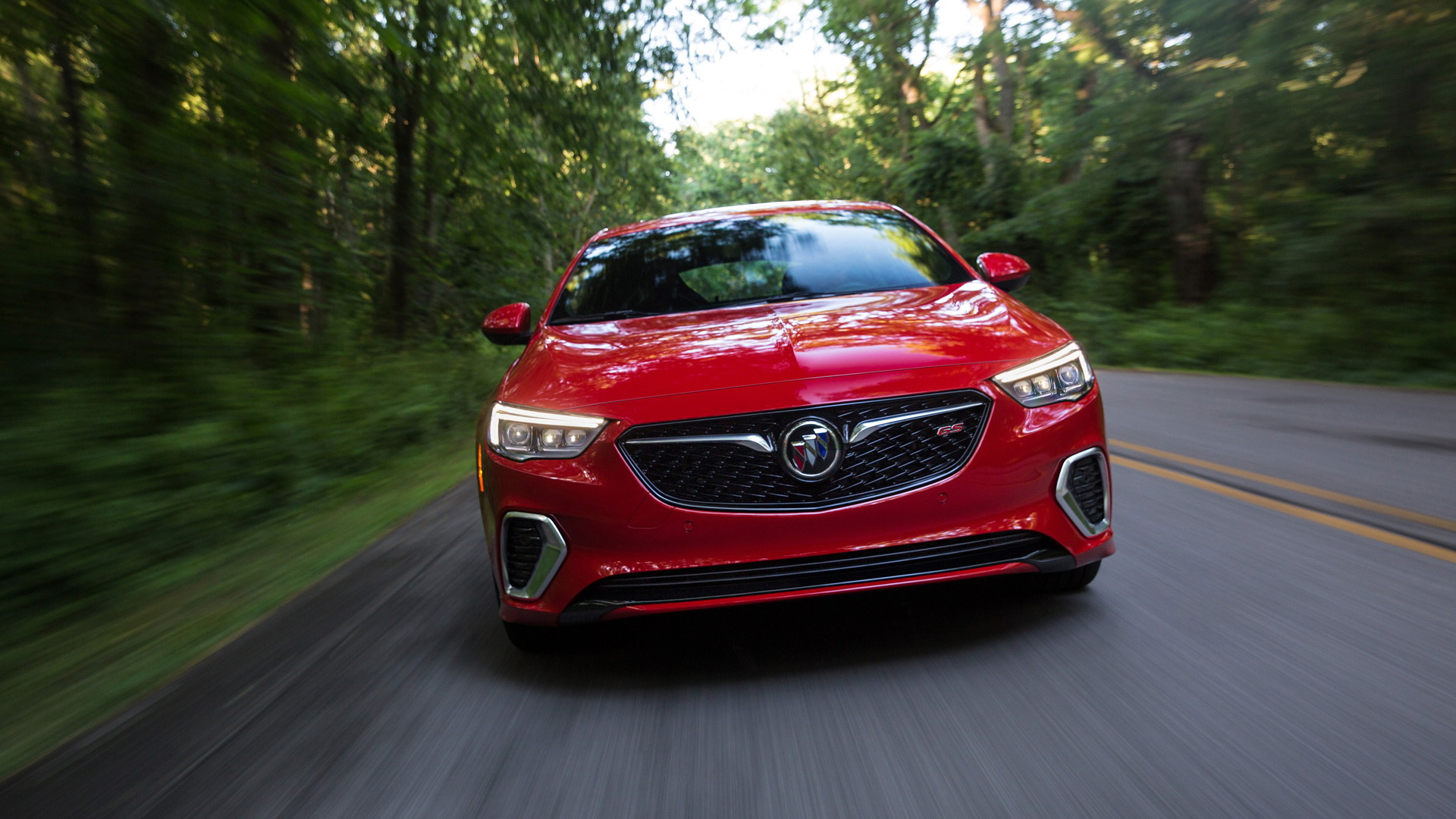 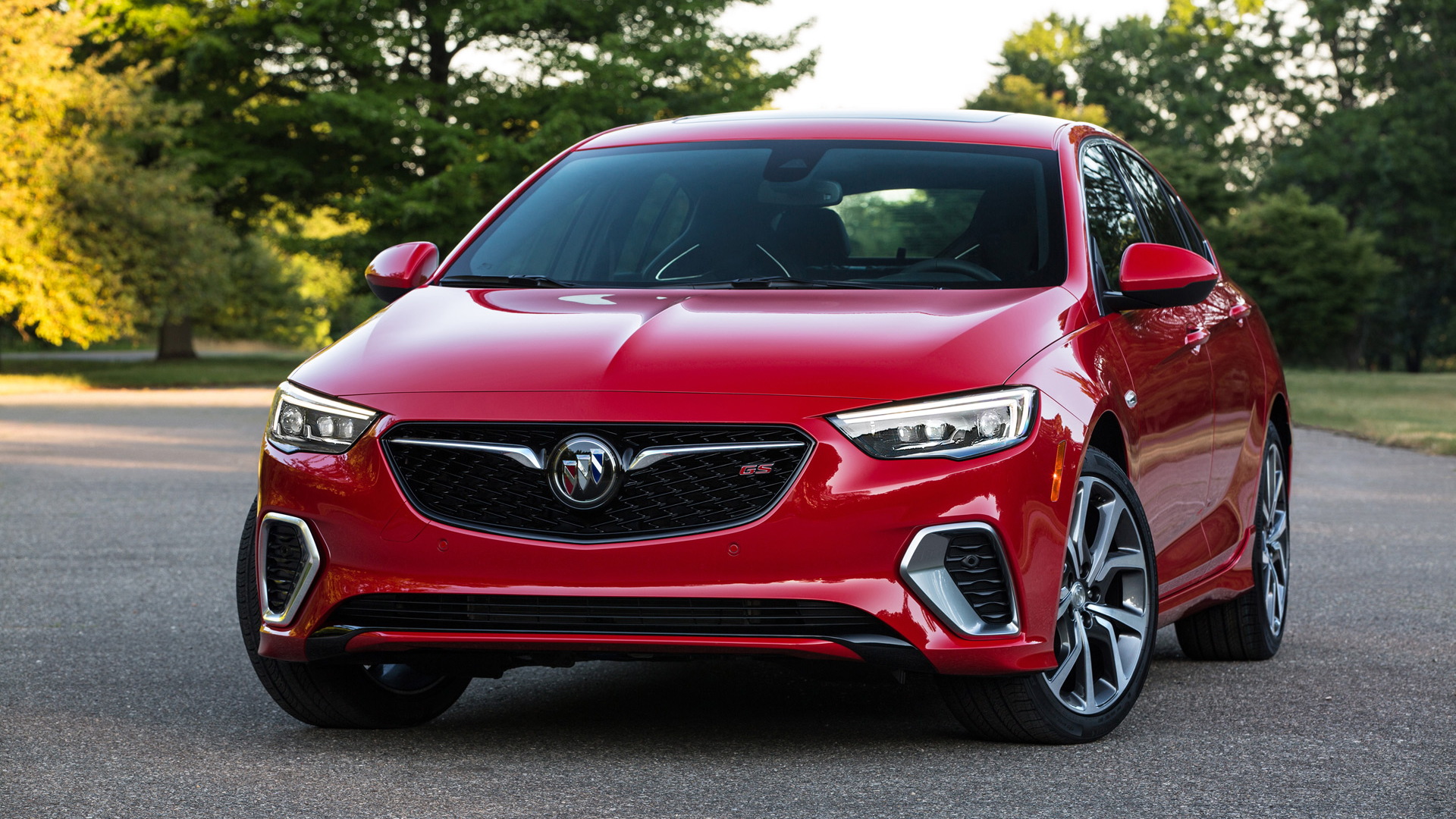 The 2018 Buick Regal GS wears lots of letters and words on its flanks and in its cabin. Two you won’t find? “Gran Sport.”

That moniker’s a relic of an era when rear-drive Buicks prowled the roads, leaded fuel their Muscle Milk. Today’s Buicks lean heavily on recently dissolved Opel roots. They’re European in ethos and sometimes in assembly, front- or all-wheel drive thanks, no V-8s, plenty of turbo-4s to go around.

Plenty of discreetly swift metal, too. The 2018 Regal GS skips the pedestrian hardware that pushes the Regal TourX wagon and the Sportback hatch, as it stuffs the Sportback’s sleek body with lots more power and grip.

It’s not just shocks and seats, an old recipe for turning mass-market machines into sex substitutes. To the pretty Sportback, Buick drags up the GS with deeper front and rear bodywork, wide air linets, a rear spoiler, 19-inch wheels, and available LED headlights. The cockpit wears serious-looking dark trim, custom sill plates and pedals, and a flat-bottomed wheel. (That was Freddy Mercury’s draft song title, in case you didn’t know.)

No, the Regal GS takes its place alongside the Kia Stinger GT as one of the more compelling ways we’ve drilled through north Georgia in the past year. It looks around GM’s parts department, and no one the wiser, grabs a bunch of 3.6-liter V-6 engines off the shelf. With 310 horsepower and 282 pound-feet of torque in charge of the Regal GS’ hustle, which compares with the turbo-4’s 250 hp and 295 lb-ft in AWD Sportbacks.

Curb weight sidles up to 3,796 lb, but with an extra forward gear and lower ratio, the more heavily equipped Regal GS likely can cut a few tenths off the acceleration times of a stock 3,417-lb Regal Sportback AWD, which reaches 60 mph in a Buick-claimed 6.2 seconds. High fives all around? High fives all around.

The V-6 GS has active noise cancellation, which relieves some of the big GM V-6 drone. Somehow my mind upconverted the sound into the crackly V-8 magic from the now-dead Chevy SS, and it got better.

The 6-cylinder works so well in the Regal GS because it’s paired with a 9-speed automatic and GM’s twin-clutch all-wheel-drive system. The 9-speed takes orders only from the console-mounted lever–you didn’t want or need shift paddles here, did you?–but savvy programming in the Sport and GS drive modes lets it hang on to lower gears, and do a swell job of point-and-click gear changes. The AWD system moves power off the transmission to all the wheels with a bias toward the front, but can ship more to the rears and vary power between the rears, for a more sophisticated power delivery than the one found in some GM crossover SUVs.

The powertrain’s mixed-bag performance aside, what the Regal GS doles out freely in Oprah-like amounts is sweet midrange handling. Buick tunes lovely steering effort into the Regal GS, without the authoritarian heft that other cars think earns them entry into sport-sedan nirvana.

As for the suspension, the GS gets an additional rear suspension link versus the Sportback, as well as sport tuning and constant-adjusting dampers that clamp down on ride compliance at the tap of the Sport or GS buttons. Sport mode’s the right middle ground between interstate cruising and thumpy but fluid ride motions. In GS mode, the Regal gets more intolerant of potholes and pavement joints, and shoves them off the Continental Pro Contact TX 245/40R-19s with some impatience. Brembo calipers in front pull the whole affair to a stop.

An upgraded driving experience would go unheralded without the usual virtue signals. The Regal GS ditches decent seats from its stablemates in favor of ultra-supportive sport buckets adjustable thigh supports, heating, cooling, and massaging functions. They’re fantastic, even if the adjustable lumbar at full bore feels like Andre the Giant has decided to use your low back as his knee rest.

The rest of the cabin remains true to the Regal’s quasi-utility mission. The hatchback opens to a 31.5-cubic-foot cargo space that swells to 60.7 cubes when the back seats fold down. (We know you’re about to ask, don’t ask: no GS wagon is nigh.)

All Regal GS hatchbacks get remote start, keyless ignition, blind-spot monitors, and parking sensors. Buick sells a few features in bundles. Add on navigation, Apple CarPlay and Android Auto, and Bose audio for $945, a safety bundle which includes automatic emergency braking for $1,690 (and should be standard at this premium price), and wireless charging and LED headlights for $485, and the Regal GS costs $43,115.

Those numbers pit the Regal GS squarely against the Nissan Maxima, which wears its outre sheet metal like it’s just returned from another battle in the intergalactic wars. The Regal GS cuts a handsome figure, one that says something more like, yes, you do aspire to vacation in Germany one day.

Discretion is the better part of valor anyway, not to mention a better way to avoid a speeding ticket.