The classic Land Rover Defender evolved over its long life from frequent use as a farming implement to new life as an iconic all-wheel-drive trophy truck.

The end of Defender production in January 2016 was practically a national day of mourning in England.

Now, you can even get Defenders entirely renovated with new powertrains and all manner of luxury features, accompanied by six-figure price tags.

But while the sturdy Landies are increasingly valuable in the U.S. and in Britain, they may still be taken a bit less seriously at home.

Why else would you take a perfectly good 50-year-old Land Rover 88 and convert it to run on ... coal?

Yes, out of all the possible powertrain transplants—the rumored future all-electric Land Rover might have a nice rejoinder to the Bollinger B1, we think—why convert to the filthiest fossil fuel? 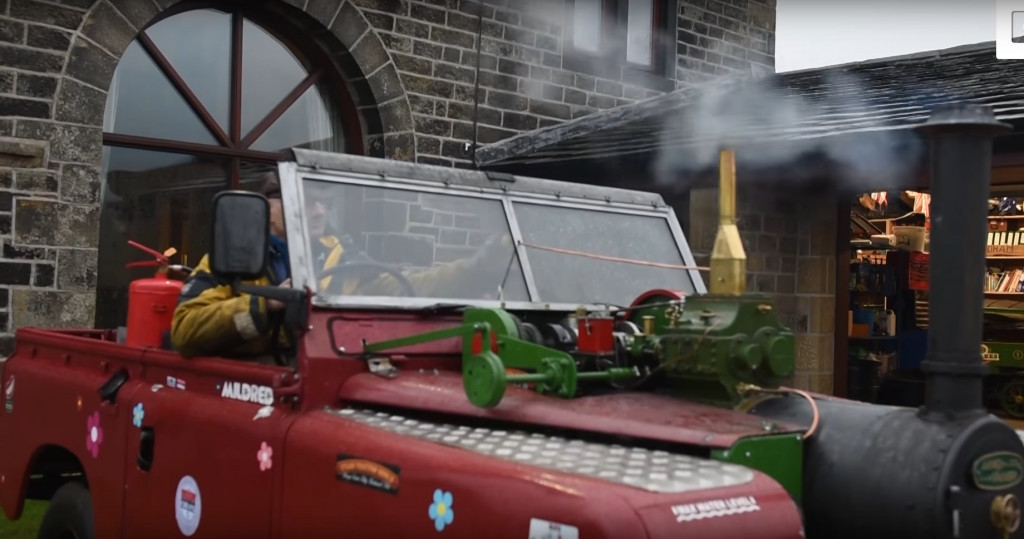 Frank Rothwell and the Land Rover he converted to a coal-powered steam engine [frame: YouTube]

It's all about entertaining his three grandchildren, as 67-year-old Frank Rothwell explains. Oh, and using it for his 1.5-mile commute to work as well.

The retired businessman from outside Manchester bought the Land Rover for £4,000 ($5,650) from a manufacturing company that had nicknamed the car "Mildred" for all the mildew inside.

He says he spent £24,000 ($34,000) and put more than 400 hours into the project to refit the old Land Rover with a coal-fired boiler that heats water until it turns into steam to power the steam engine that turns the wheels.

With a full head of steam, top speed is a leisurely 15 mph, though that's in keeping with the marque, since early models were hard-pressed to go much above 40 to 50 mph.

His three grandchildren are big fans of the coal-powered Land Rover, though Rothwell says his wife is less enthusiastic.

"I think it's really good for children of this era to do things like lighting fires and using coal," he says, "because they have little access to using things like that these days."

EDITOR'S NOTE: Motor Authority thanks our tipster, who prefers to remain an International Man of Mystery