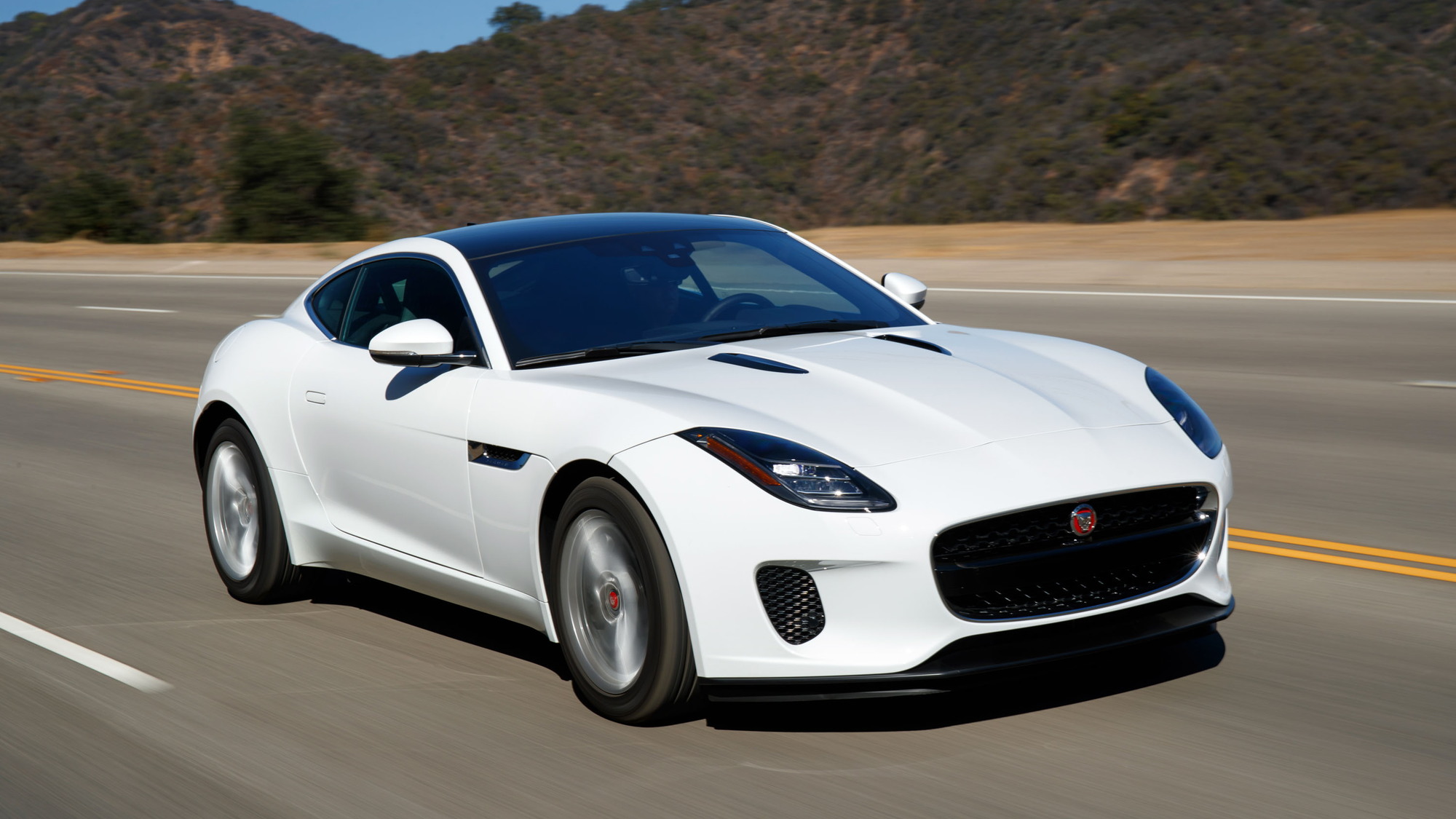 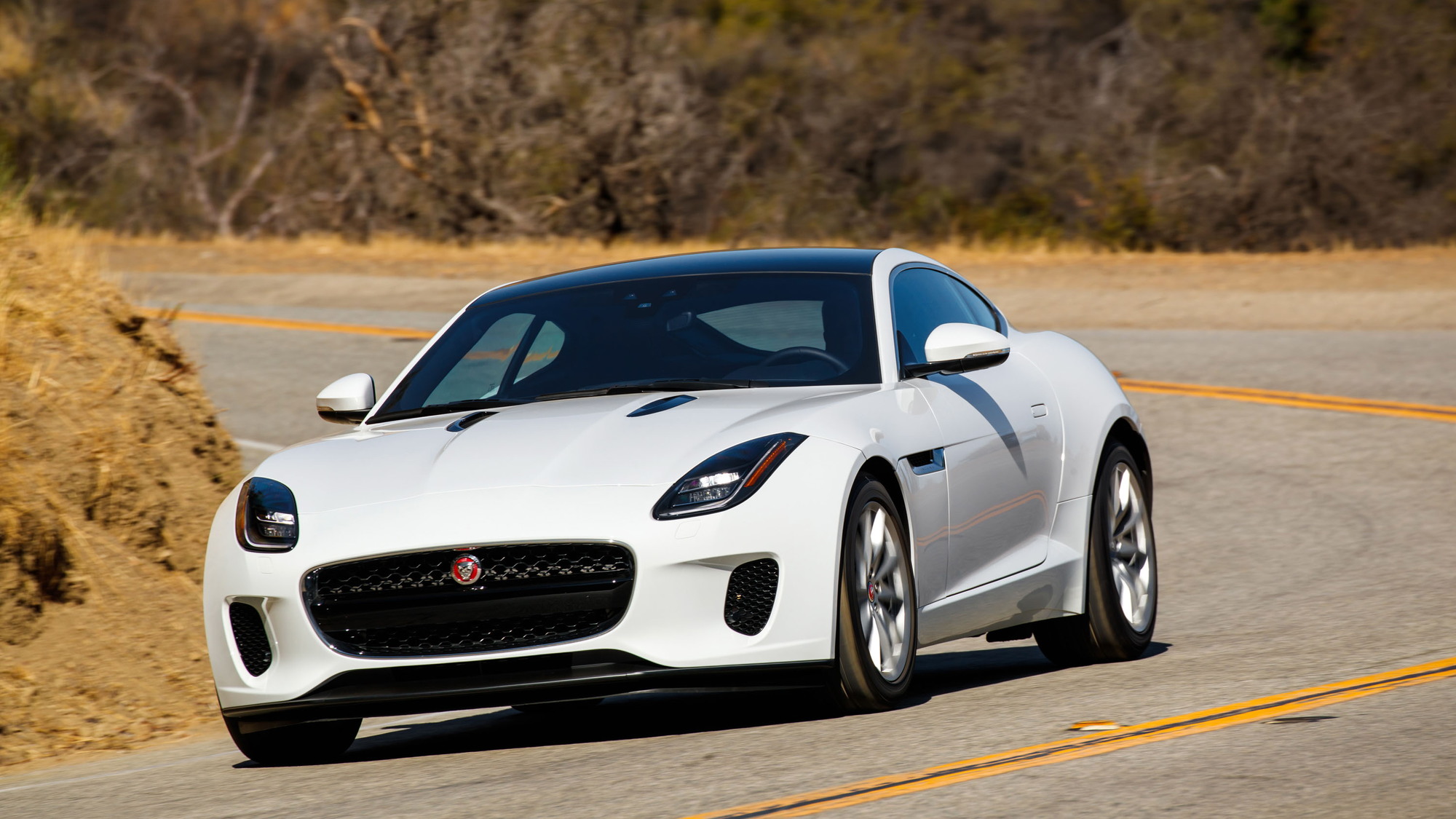 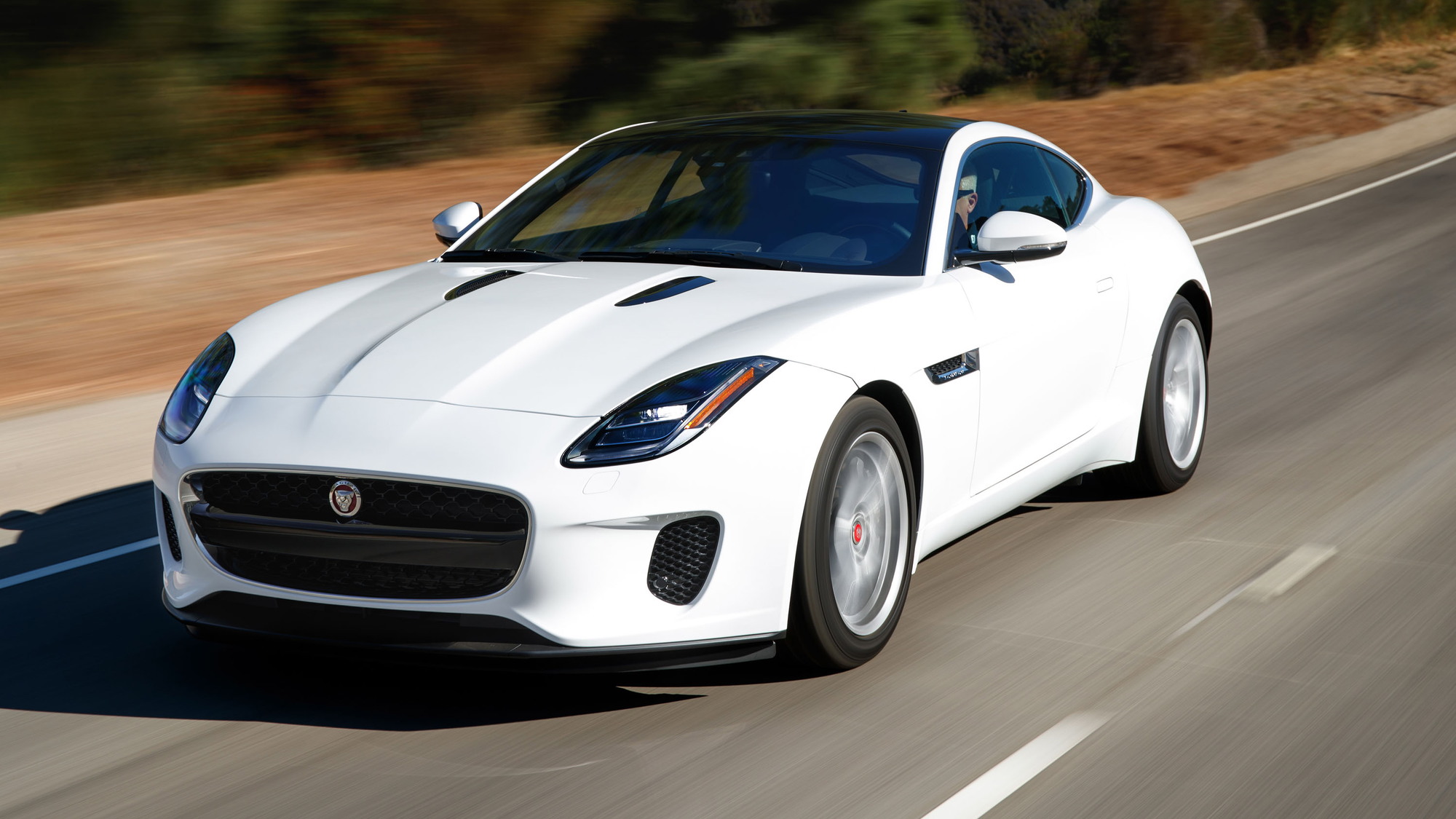 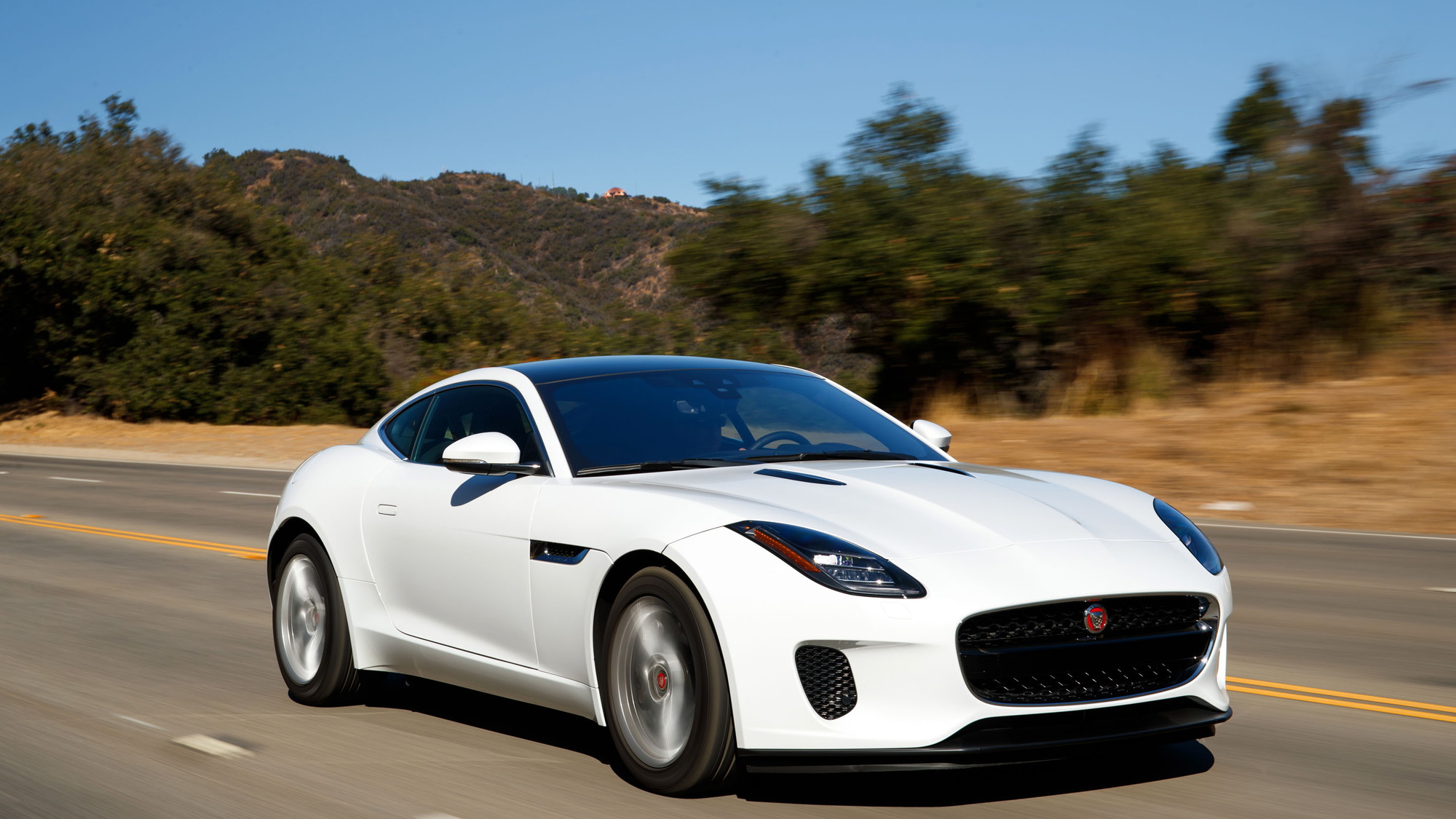 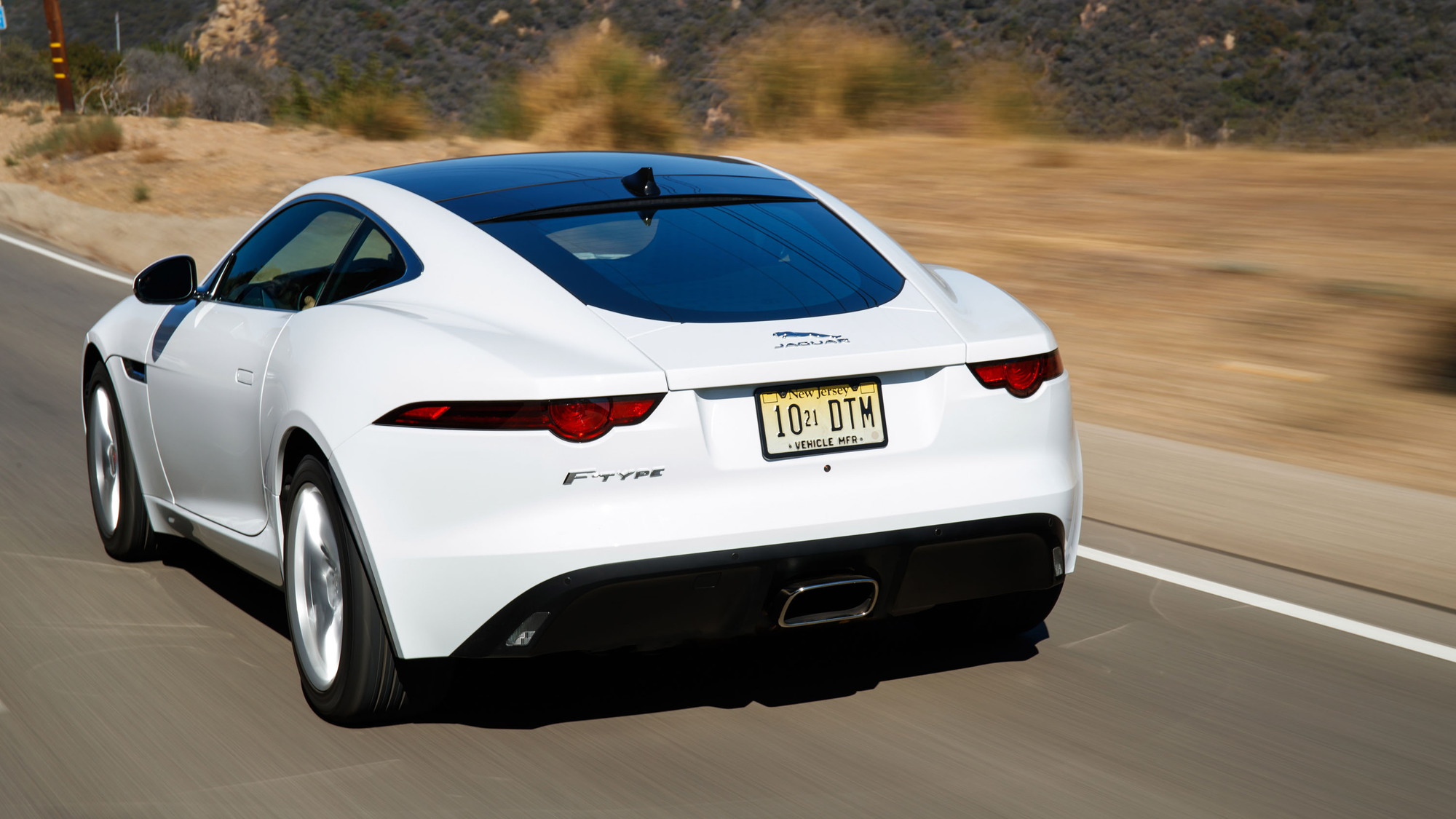 If there was ever a reason to save $10,000—that’s the price premium Jaguar charges for a V-6 over a turbo-4 F-Type—this is it. For 2018, Jaguar has stuffed its new 2.0-liter turbo-4 under the F-Type’s long hood to create a new entry-level model, one that perhaps best fulfills the model's mission of splitting the difference between coddling grand-tourer and corner-carving sports car.

It’s a coupe as at home on long stretches of highway with its adaptive cruise control engaged as it is in Sport mode on a winding road.

I happen to have Sport mode engaged, and the 2018 F-Type I'm hustling down impossibly winding Latigo Canyon Road on an impossibly sunny Southern California morning is making all the right noises, though the audio system is actually impersonating a more muscular engine.

It’s so aurally pleasing that it’s almost enough to make me forget that the V-6 and ferocious V-8 engines fitted to the rest of the F-Type lineup sound so good. No, the turbo-4 doesn't make the F-Type into a better car, but it does change this two-door's character.

In execution, the turbo-4 rumbles at idle more than something with the brand’s leaping cat logo should once fired up. At city-slicker speeds, it thrums without totally feeling uncouth. Open things up and torque piles on with a more Jaguar-like smoothness. The twin-scroll turbocharger doesn’t surge with abrupt power delivery, instead relying on a progressive, easy-to-modulate throttle.

The F-Type snarls and growls in sync with the accelerator, but not all the noises are coming from underhood. Instead, they’re pumped through the car’s audio system and they’re convincingly delightful, if not exactly accurate. An optional switchable active exhaust system lets drivers open up the exhaust’s valves for even more aural stimulation, but that wasn’t fitted to my test car and it’s hard to imagine how well that admittedly cheap ($255) option would work in concert with the artificial noises that come through the speakers.

As we’ve come to expect from the now ubiquitous transmission, the 8-speed fires off quick shifts under pressure. Flappy paddles behind the thin-rimmed, three-spoke steering wheel are ready for a good time, but I found myself content with letting the transmission do the work in Sport mode.

There’s no manual option in the base F-Type, which seems like a missed opportunity for enthusiasts. Jaguar admits that demand for F-Type manuals is minimal, though, so it’s another case of car guys and gals not putting their money where their mouths (and Internet comments) are.

The Jag’s steering is delightfully light and accurate, if not exactly dripping with road feel. The standard 18-inch Michelin rubber on my test car split the difference between grip and comfort. Pushed hard, the F-Type was reluctant to let go. It’s not exactly the kind of sports car that buys into the “slow car fast” mantra since it’s rather rapid, but among F-Types, it's easiest to squeeze the most (legal) fun out of the 4-cylinder version.

My low-option tester—$65,663 with heated seats, a panoramic glass roof, and a few comfort items—best encapsulates the new entry-level F-Type’s virtues. It’s roomier and softer than a Porsche 718 Cayman, which seems like its closest rival. Pick the British Racing Green paint—because this F-Type honors the brand’s past better than the more manic 6- and 8-cylinder models—and set about on your continental journey.