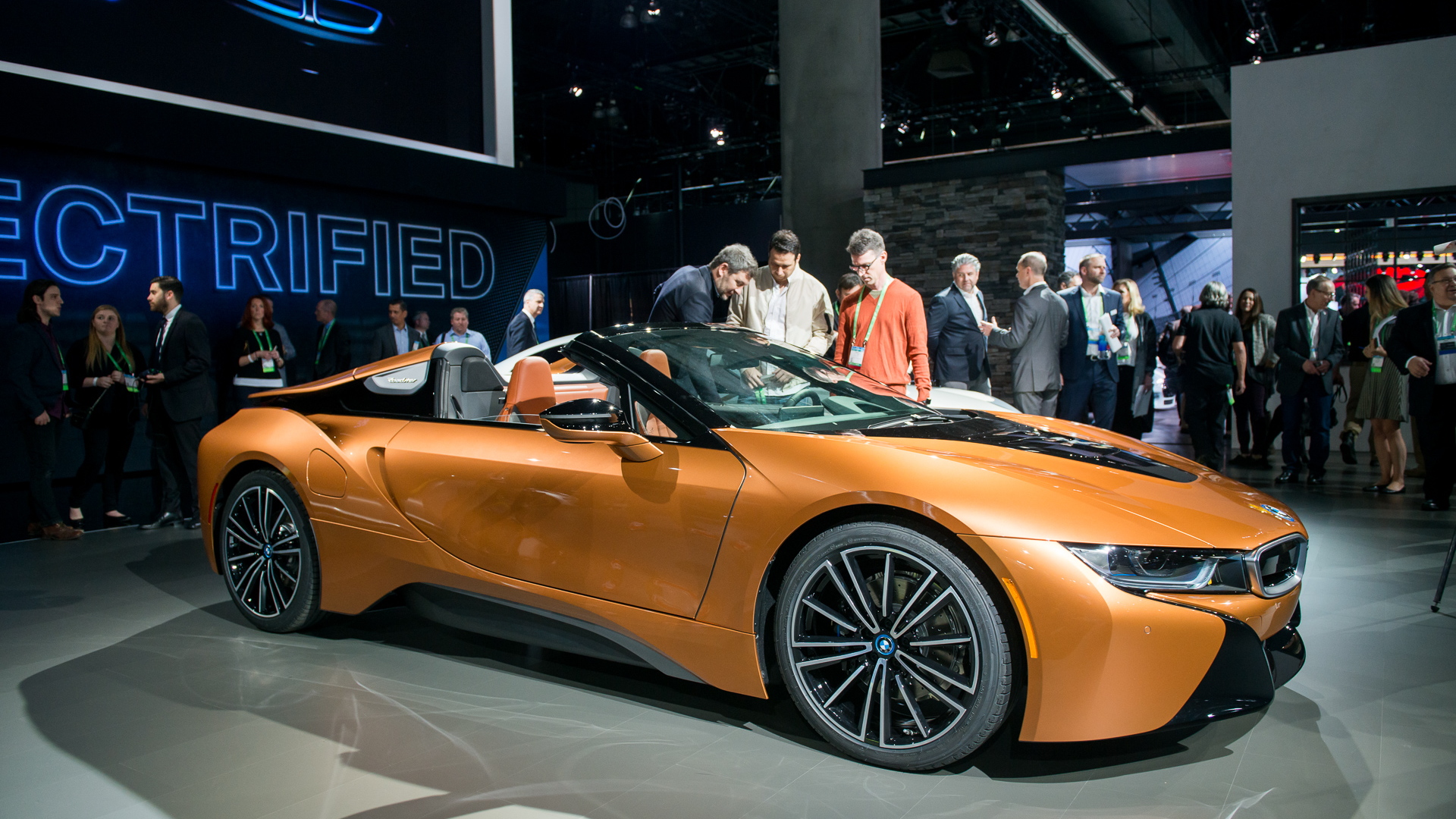 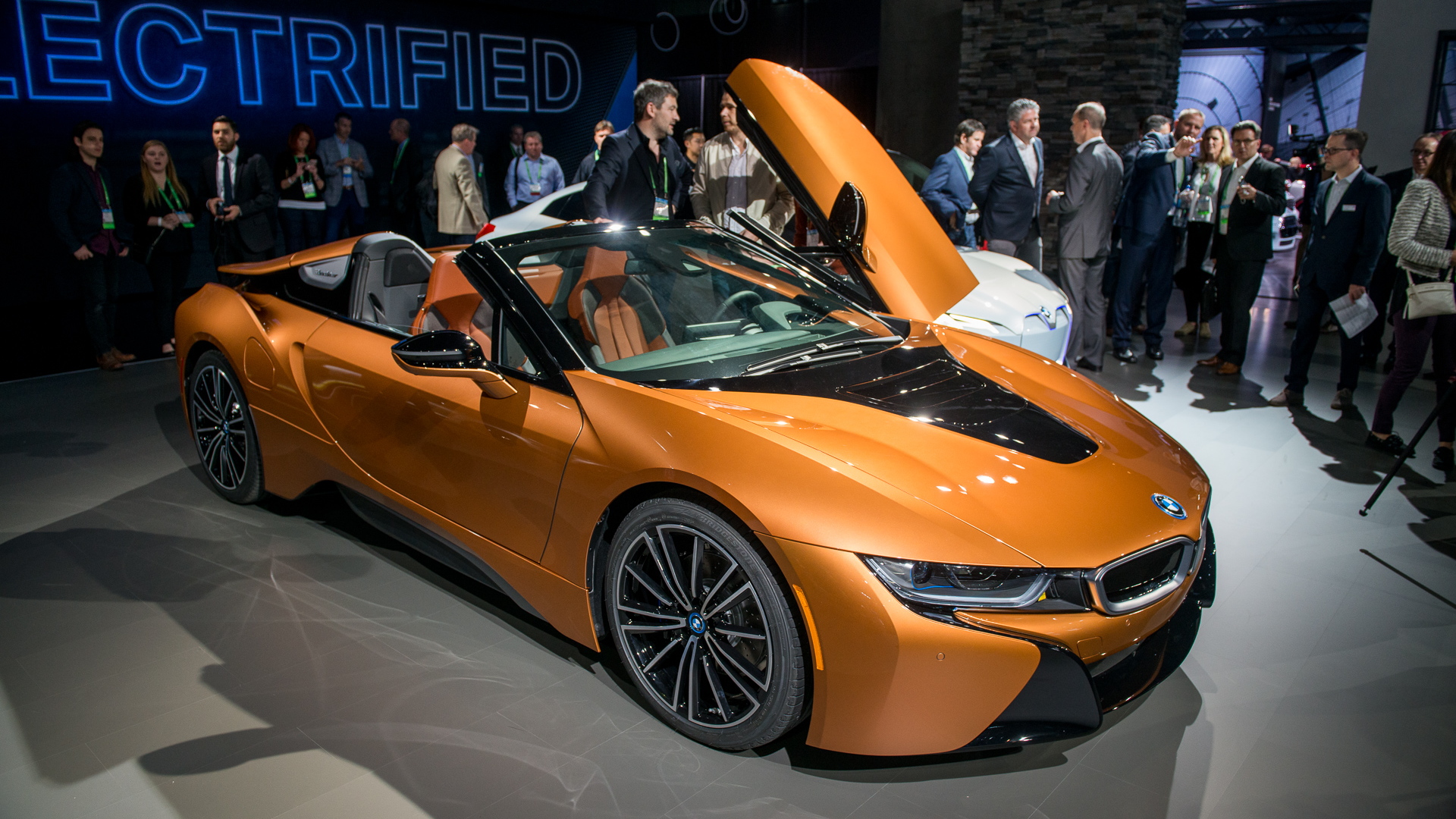 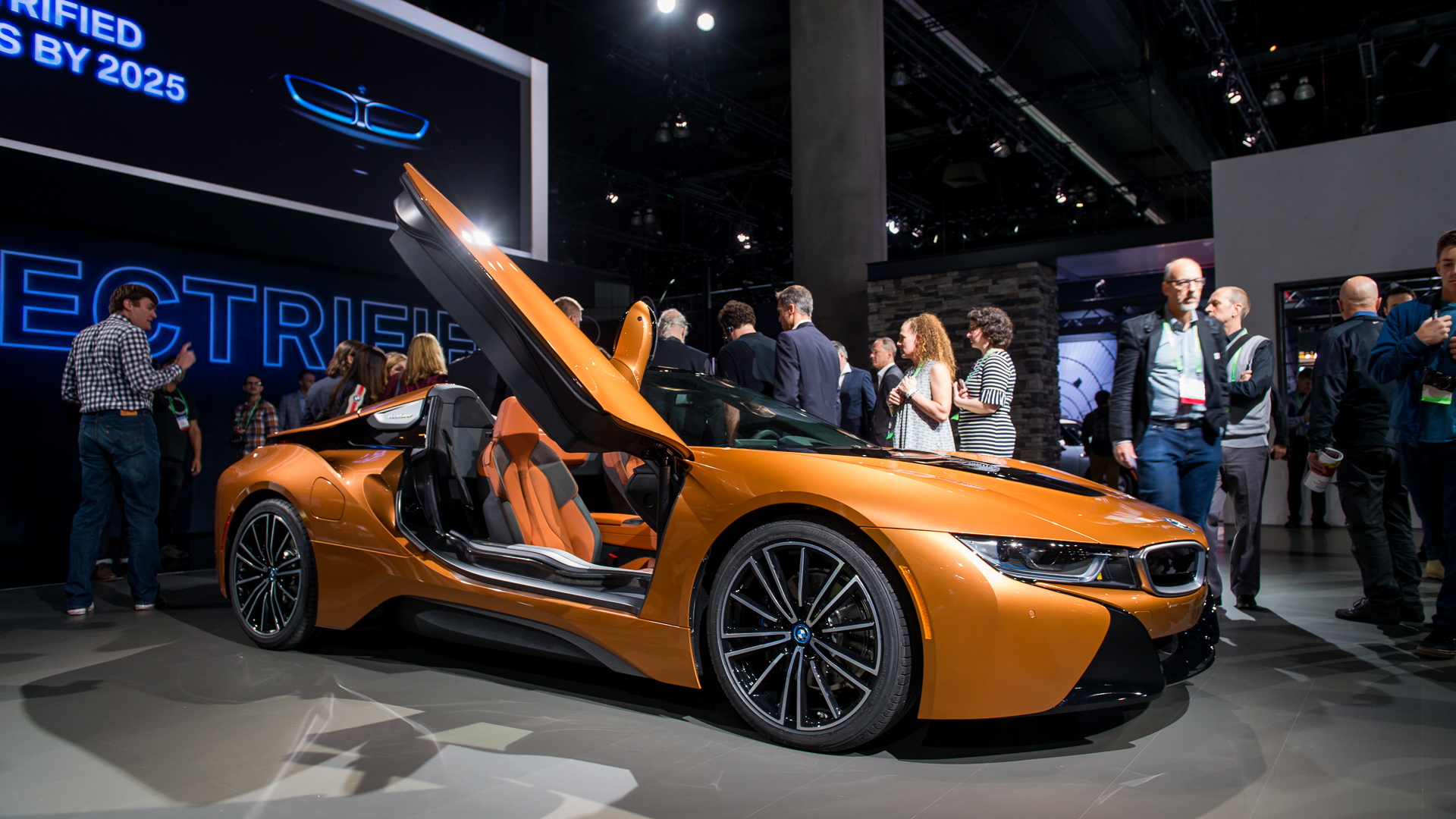 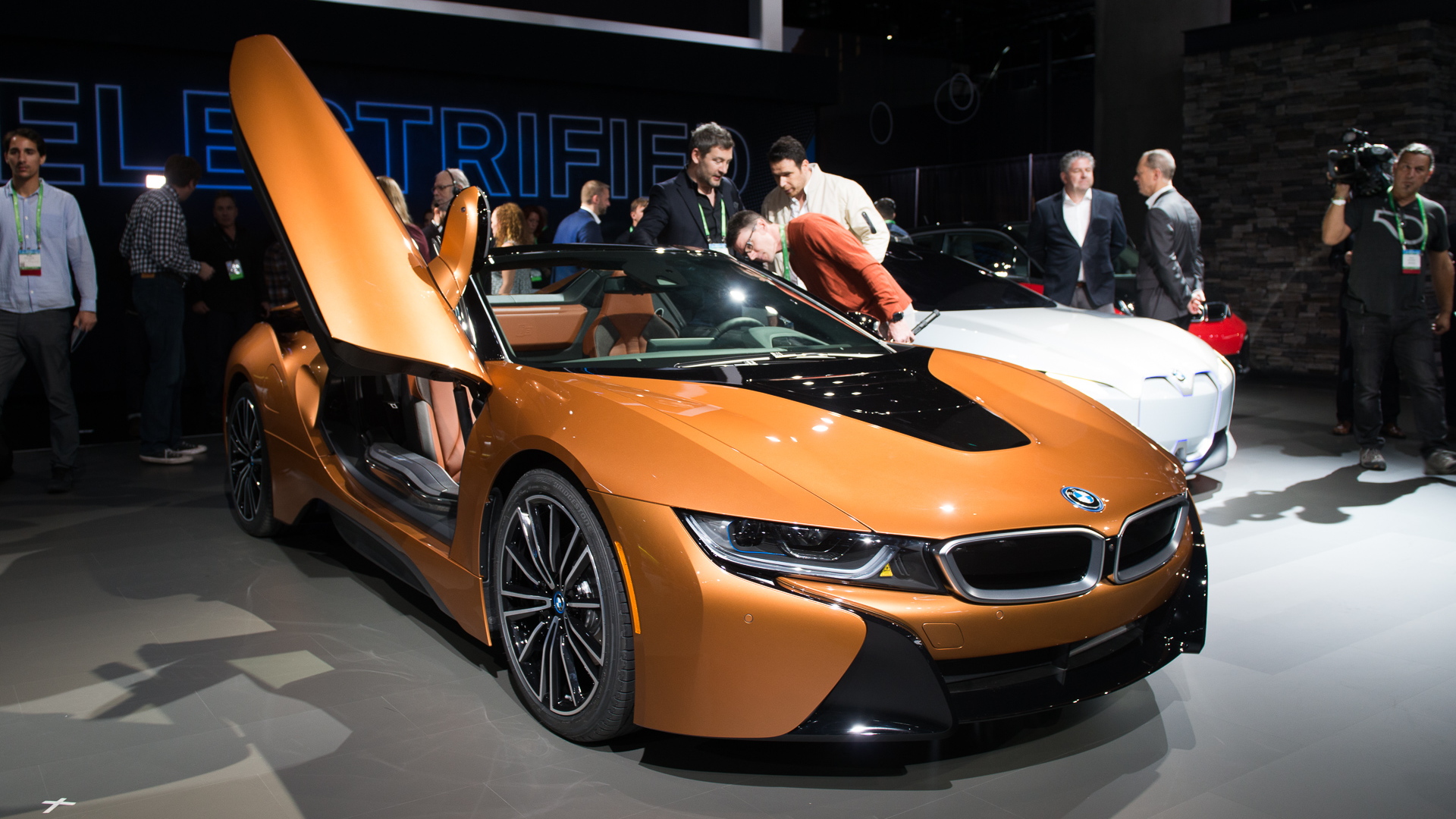 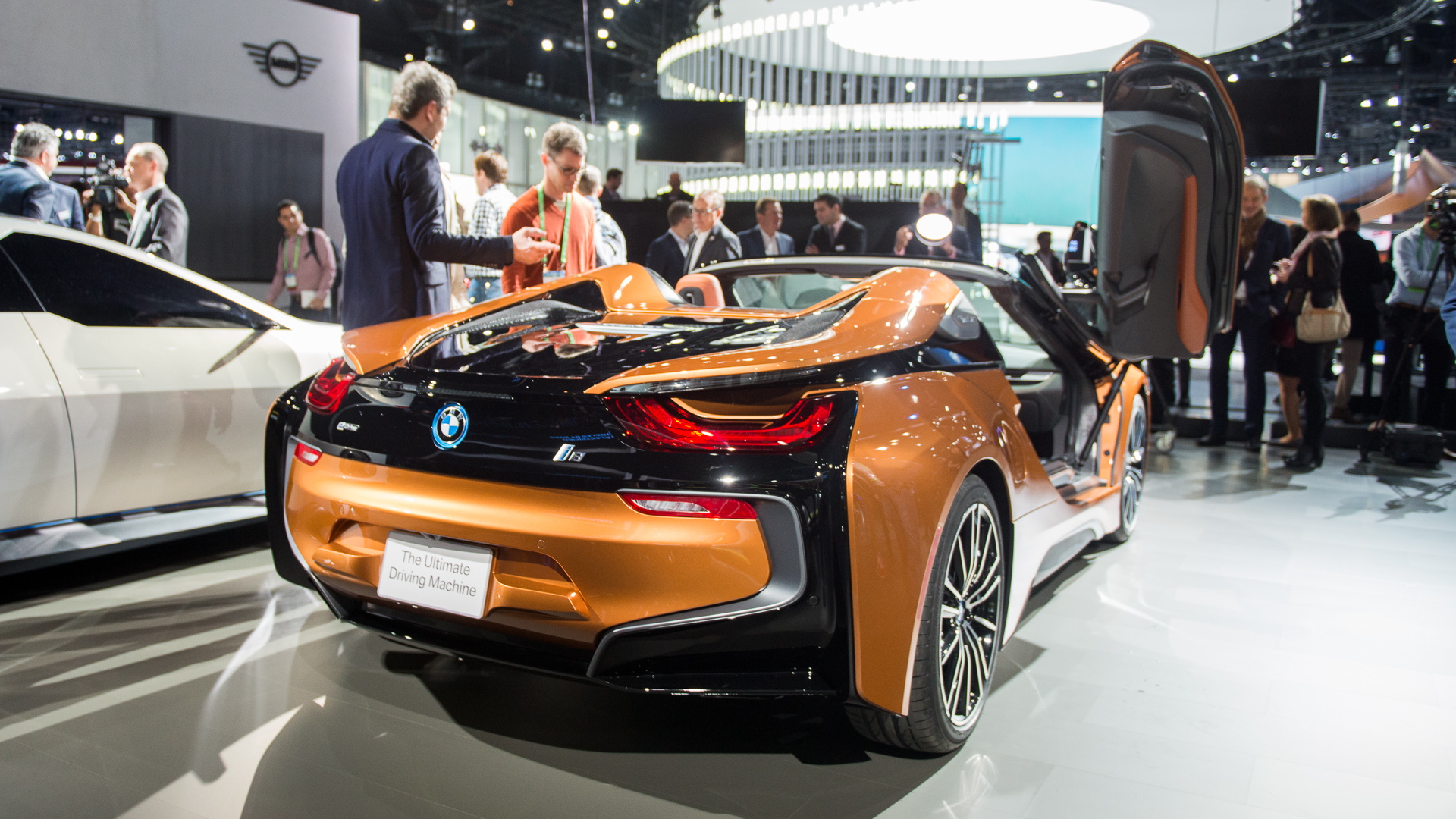 BMW’s i8 plug-in hybrid sports car can now be ordered as a convertible.

BMW took the covers off the new i8 Roadster on Wednesday at the 2017 Los Angeles Auto Show, where the automaker also announced some updates for the i8 coupe.

It was all the way back in 2012 when we first saw a concept of an open-top i8. Why it’s taken five years for the car to reach production isn’t clear.

The i8 Roadster features an automated soft-top roof that functions at speeds of up to 31 mph and requires less than 16 seconds to go up or down. When down, the roof stows away into a perpendicular position in the rear. Note, there aren’t any rear seats here, like in the i8 coupe.

To accommodate the roof, the sloping rear windshield found on the i8 coupe has been replaced by a small, vertical rear window and new engine cover. Flanking the engine cover are new cowls that flow into the individual rear wings. Also new are the frameless doors.

Also unique to the i8 Roadster are various chassis settings implemented to ensure the car’s dynamic performance is similar to that of the coupe, despite a 132-pound weight disadvantage. The list includes bespoke tuning of the suspension and damping systems, the specially configured steering characteristics, a firmer roll stabilization setup and precise tweaks of the stability control.

Apart from these changes, the i8 Roadster is pretty much identical to the i8 coupe, which for the 2019 model year, benefits from extra power, electric range and refinement. We’re not talking much extra here, however, so don’t get too excited.

A 1.5-liter turbocharged inline-3, 6-speed auto, and electric motor combo still resides within, though system output is now 369 horsepower, up from 362 previously. This delivers 0-60 mph acceleration of 4.2 seconds in the coupe and 4.4 seconds in the convertible. Top speed is governed to 155 mph in both.

BMW says the engine is less noisy than before, which is odd since the i8’s been designed to pump fake engine noise into the cabin to make you think you have a big V-8 instead of a lowly 3-banger.

A more significant change to the powertrain is a bigger battery, now 11.6 kilowatt-hours instead of 7.1. This sees a bump in electric range to 18 miles, up from 15 previously. The extra capacity has also made it possible to raise the electric motor’s peak output by 12 hp to 141 hp.

Finally, it’s worth mentioning some of the electronic driving aids. Included as standard are a cruise control system with braking function as well as the Driving Assistant Package including Surround View. This system comprises Frontal Collision warning with City Collision Mitigation Daytime Pedestrian Protection Park Distance Control with sensors at the front and rear, Automatic Highbeams, Speed Limit Info and Cross Traffic Alert and Side and Top View Cameras.

The 2019 i8 reaches showrooms next spring. Pricing information will be announced closer to the market launch.