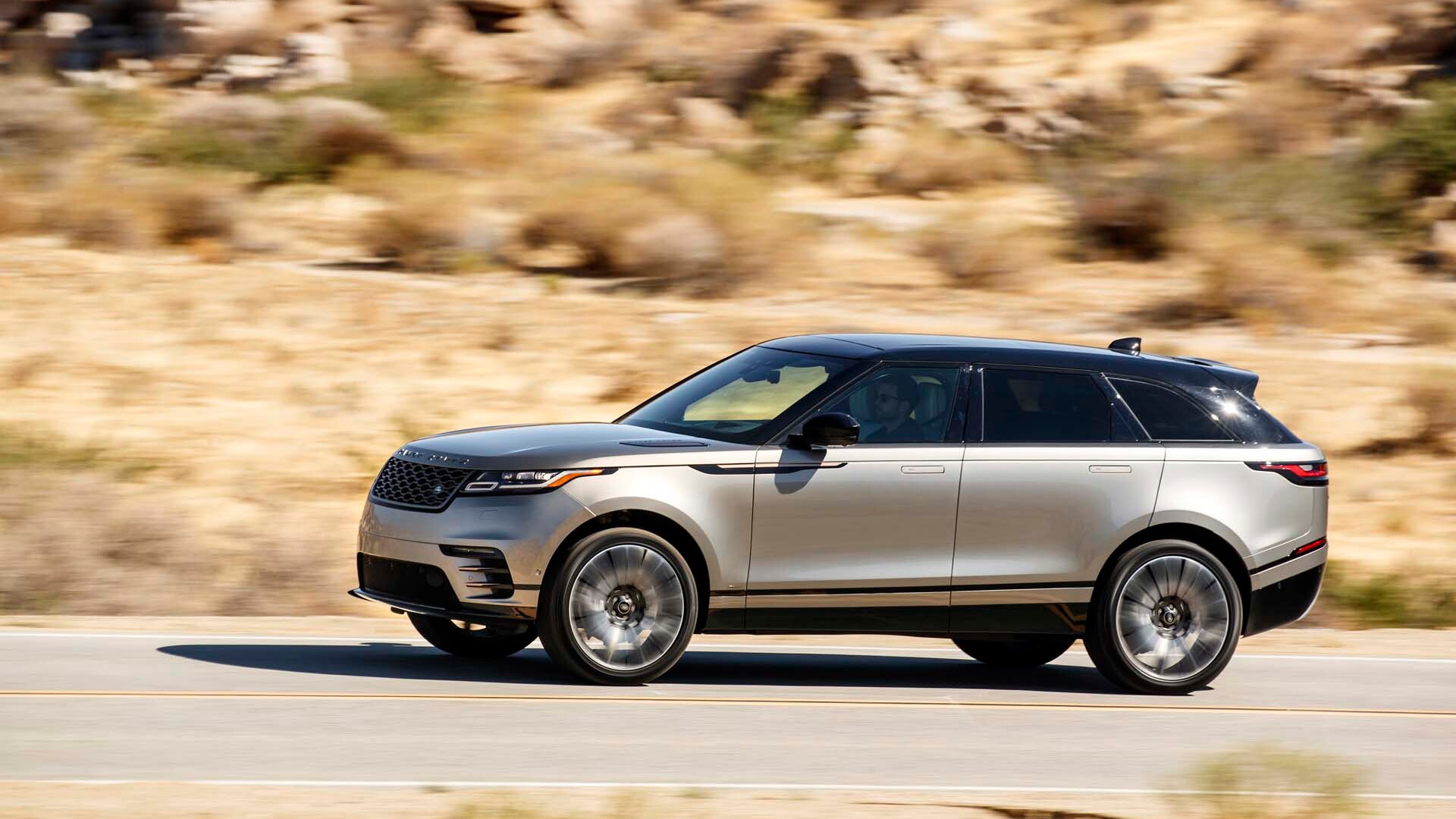 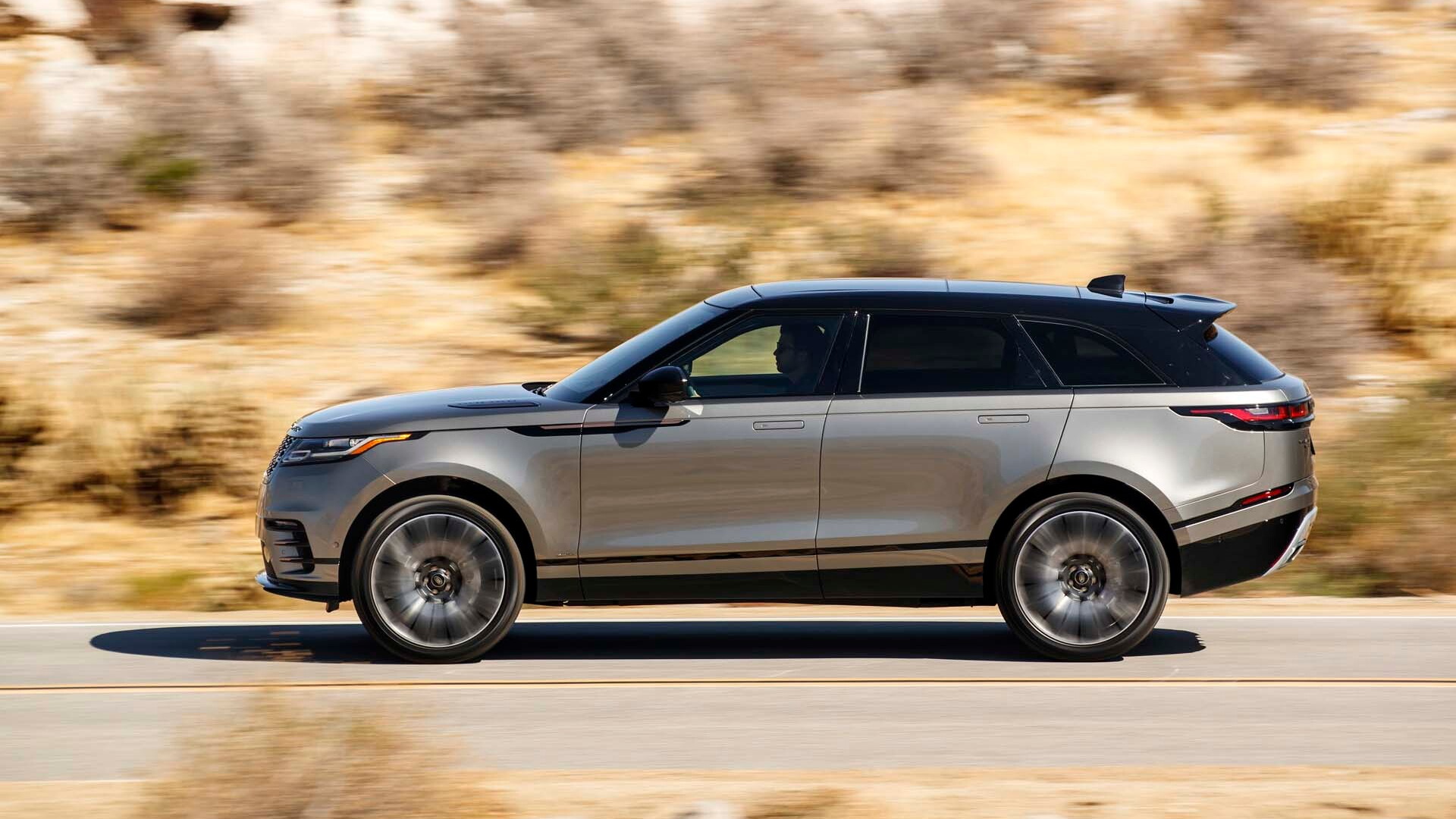 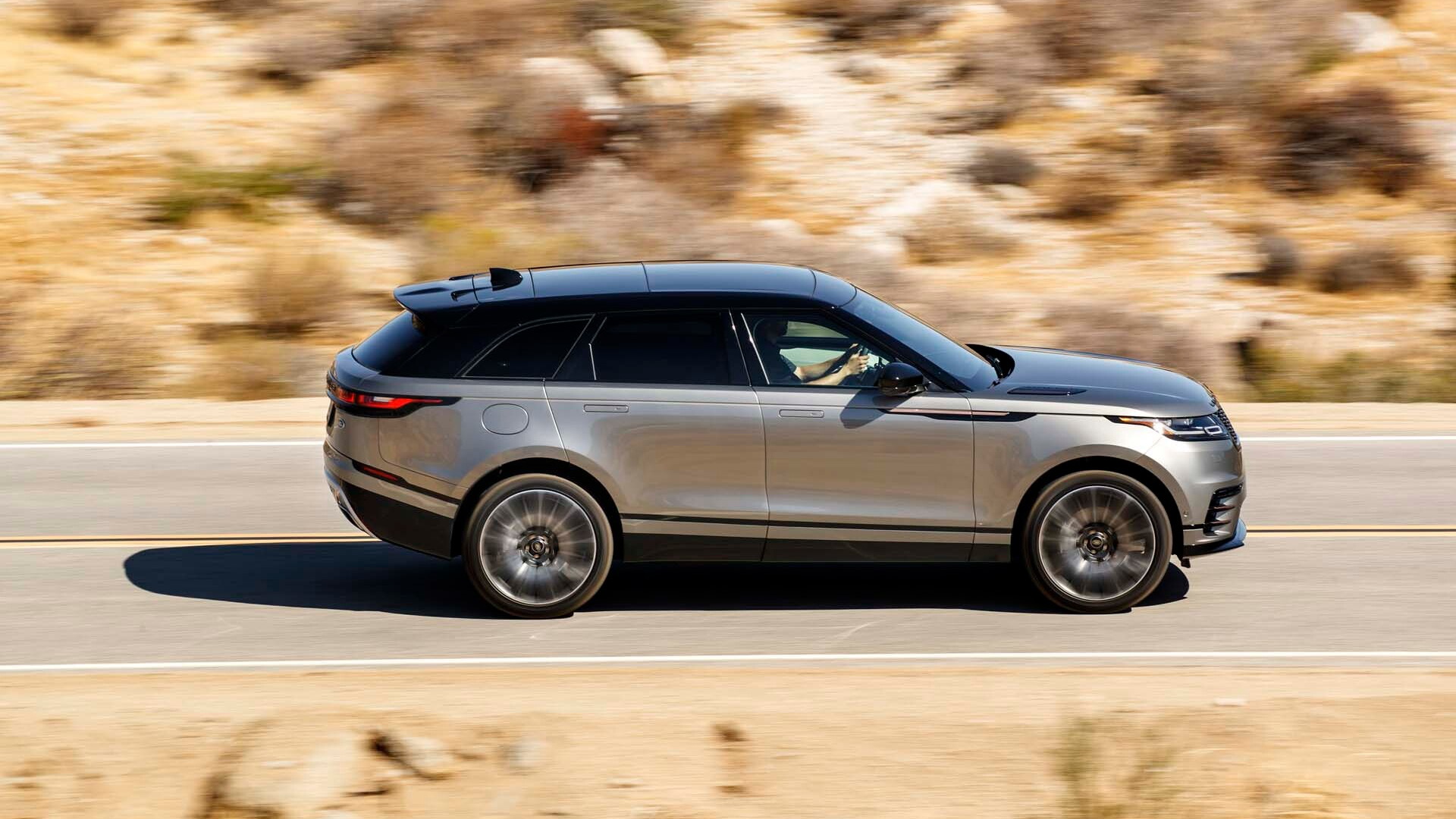 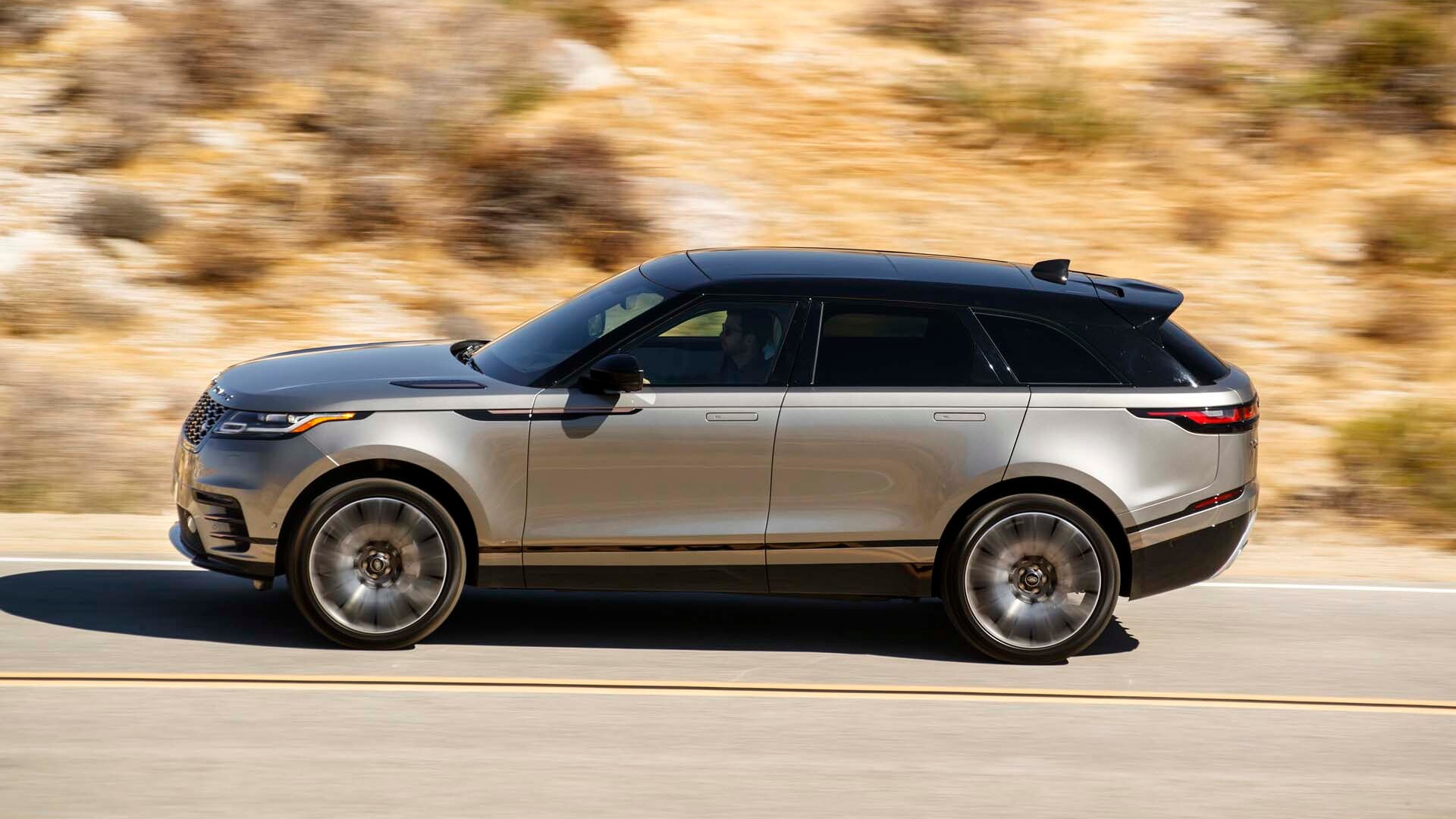 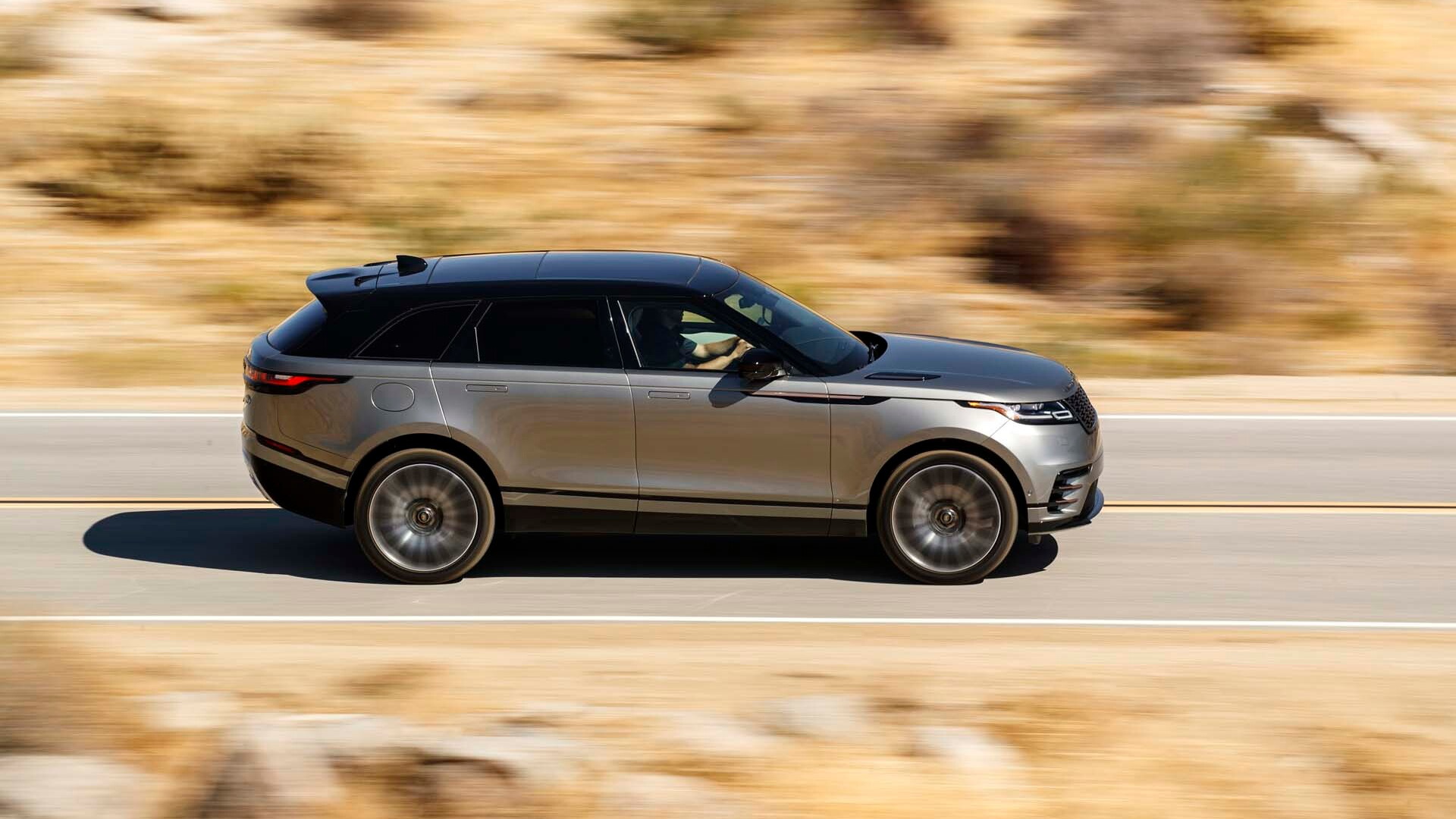 Land Rover has learned a thing or three since its sale nine years ago.

Second, British automobiles and reliability don’t have to be mutually exclusive (except when it is).

It doesn’t take long for the Velar to run away from the Jaguar F-Pace from which it’s based—it only needs to climb a mountain. The Velar daringly rids itself of the Jag’s door handles, curves, and a gaping maw in favor of a sleeker profile, sharp lines running from bow to stern, and more measurable inches of screens than the family room TVs of my childhood.

That the Range Rover Velar is verifiably a Land Rover when the asphalt ends is almost irrelevant; it doesn’t take long to see that its off-road programs will be used less than the instruction manual.

The Velar is already fashion icon, and it’s been on sale for less than 60 days.

And that’s proof that Range Rover has learned from its past.

The Velar accentuates the details like no other Range Rover—for now.

Creamy Windsor leather hides, standard on all but base models, are punctuated with a diamond details that resemble a Union Jack flag. Same goes for the designer-level speaker grilles flanked by resplendent door materials that included brushed aluminum. Posh.

While the dual 10-inch touchscreens in the middle of the console are anything but subtle, their customization and responsiveness is shockingly livable. It makes the best case yet that Apple CarPlay doesn’t need to be everywhere, and that automakers may have emerged from 20 years of fumbling through infotainment systems. I get the feeling that Range Rover’s patriarch, Charles Spencer King, would be livid.

And I could go on.

Like the name Haagen-Dazs, the word “Velar” has very little meaning beyond its initial smokescreen. When the original Range Rover prototype was testing in the late 1960s, engineers used the word “Velar” because it was loosely related to the Latin velum—close to “veil.” Legend dictates further that engineers could also spell “Velar” with the letters already in use from “Land Rover.” In other words, the name doesn’t mean much.

But in the same way an ice cream can transcend beyond its name’s modest origins, Velar will mean for Range Rover shoppers an air of decadent flavors.

The Range Rover gets the F-Pace’s menu of powertrains including a base turbo-4, and optional turbodiesel inline-4 or supercharged V-6. While none of the engines are particularly refined, all of the above aptly power the Range Rover’s amenities that will appeal more than its power delivery.

The Velar relies on a base suspension package that uses double wishbones up front and an integral linked rear end to insulate passengers from unwashed (land)masses. An air suspension, standard on V-6-equipped models, does much better than that and can raise up to 9.9 inches of overall ground clearance, ford up to 25.6 inches of water, and turn rutted trails into butter.

The motions of the Velar aren’t entirely iced over—the Terrain Response Control system helps dial in steering heft and throttle response through a dizzying array of configurations including Dynamic, Comfort, Eco, and varying degrees of detritus that include mud, sand, snow, ruts, and likely mall lot curbs. While the suspension works to insulate passengers and driver from head tossing and bouncing rides, it doesn’t do so quietly.

The newfound Terrain Response Control system is easily one of the most configurable systems, and one that we’re told will reappear in the next-generation Defender when it goes on sale—sometime. It’s also highly likely that the similarities between the rough and tumble Defender and the smooth suited Velar end there.

The Velar fits solidly between the smaller Evoque and larger Range Rover Sport even though it dangerously encroaches on the latter. The Velar is a foot longer than the Evoque, but only 3 inches shorter, nose to toes, than the Range Rover Sport. It’s 3 inches narrower too, but sports a rear bumper that reads bigger thanks to strong horizontal elements. The Range Rover Sport relatively towers over the Velar with 5 additional inches of height, but the Velar doesn’t concern itself with that. It’s the first Range Rover with a coefficient of drag lower than “brick in the wind.” The Velar’s shape surely helps with fuel economy, but it absolutely helps with more sex appeal.

When the Velar eventually gets a V-8 engine (which Land Rover won’t officially discuss, but it’s worth remembering that the V-6 block is the same size as the V-8) justifying the blocky Range Rover Sport and its prodigious thirst will be tougher than a prison steak.

But this new Velar isn’t about the hardware underneath so much as it is about the soft wares everywhere else.

New ways for an old idea

The Velar rumbles to life in a restrained, unhurried way.

Despite the supercharged V-6’s 380 horsepower, which can carry 4,400 pounds of the SUV’s mass up to 60 mph in 5.3 seconds, it’s not particularly deft. Fire-breathing V-8s are begging to be loosed at every stoplight in bigger Range Rovers but the Velar prefers to glide right through them.

The base gas turbo-4 is more relaxed, but no more refined, and takes a second longer to do the same deed. The turbodiesel is the fuel-economy champ, at up to 30 mpg highway, but its proposition is fading in the future of electrification.

The V-6 will be the most popular pick, according to Range Rover, and account for half of the Velars sold in the U.S. to start. Only one in 10 Velars will be equipped with a diesel engine up front, and the company has already announced that it would switch to electrified powertrains in 2020. The writing, it’s on the wall, so to speak.

Regardless of engine, all versions of the Velar get an 8-speed automatic mercifully gifted with paddle-shifters. Tipping the gear selector into Sport mode fortunately holds gears longer, but clicking down a few gears will become habitual for lead-footed drivers with light-weighted wallets forced to opt for the turbo-4.

That’s all familiar from the Jaguar F-Pace. The way that the Velar delights isn’t.

Opting for top trims of the Velar mean a 12.3-inch driver information display that rivals Audi’s similar unit. Their name may be trademarked, but the idea surely isn’t.

The Velar boasts an updated steering wheel control system that borrows the tactile feel from older models via buttons and knobs, but adds backlit buttons and contextual touchwheels for refined controls.

There’s much to do about the touchscreen controls in the Velar that will appear in next year’s Range Rover and Range Rover Sport models.

Across the horizontally oriented dash, a single span of leather or textured vinyl is broken only via elegant stitching or small patterns that would be welcome in a high-class cocktail bar. You know, the $20-a-drink places in town.

In the back, the Velar succumbs to the same foibles that the F-Pace and Discovery Sport fall victim too. Rear-seat leg room is adequate, but not ample—6-footers behind other 6-footers is possible, but not entirely comfortable. The Velar boasts an ample 34.4 cubic feet of cargo space behind the second row, which opens up to 70.1 cubes with the seats folded down.

But the rear seats can do a better trick when up—they can recline several inches for better comfort on long hauls.

That’s the Velar’s wheelhouse anyway. Despite wearing a badge that used to adorn fishbowls riding on top of skateboards, the newest Range Rover goes the other way. Its streamlined shape doesn’t afford the same outward vision of other Range Rovers, but its shape speaks more to what Range Rover has meant for more buyers.

At more than $50,000 to start—and easily configurable to $90,000 in First Edition versions with premium stereo and seating options—the Range Rover Velar soon will be among the top-sellers for the brand, perhaps the best-seller overall.

Land Rover provided travel and lodging to Internet Brands Automotive to bring you this firsthand report.