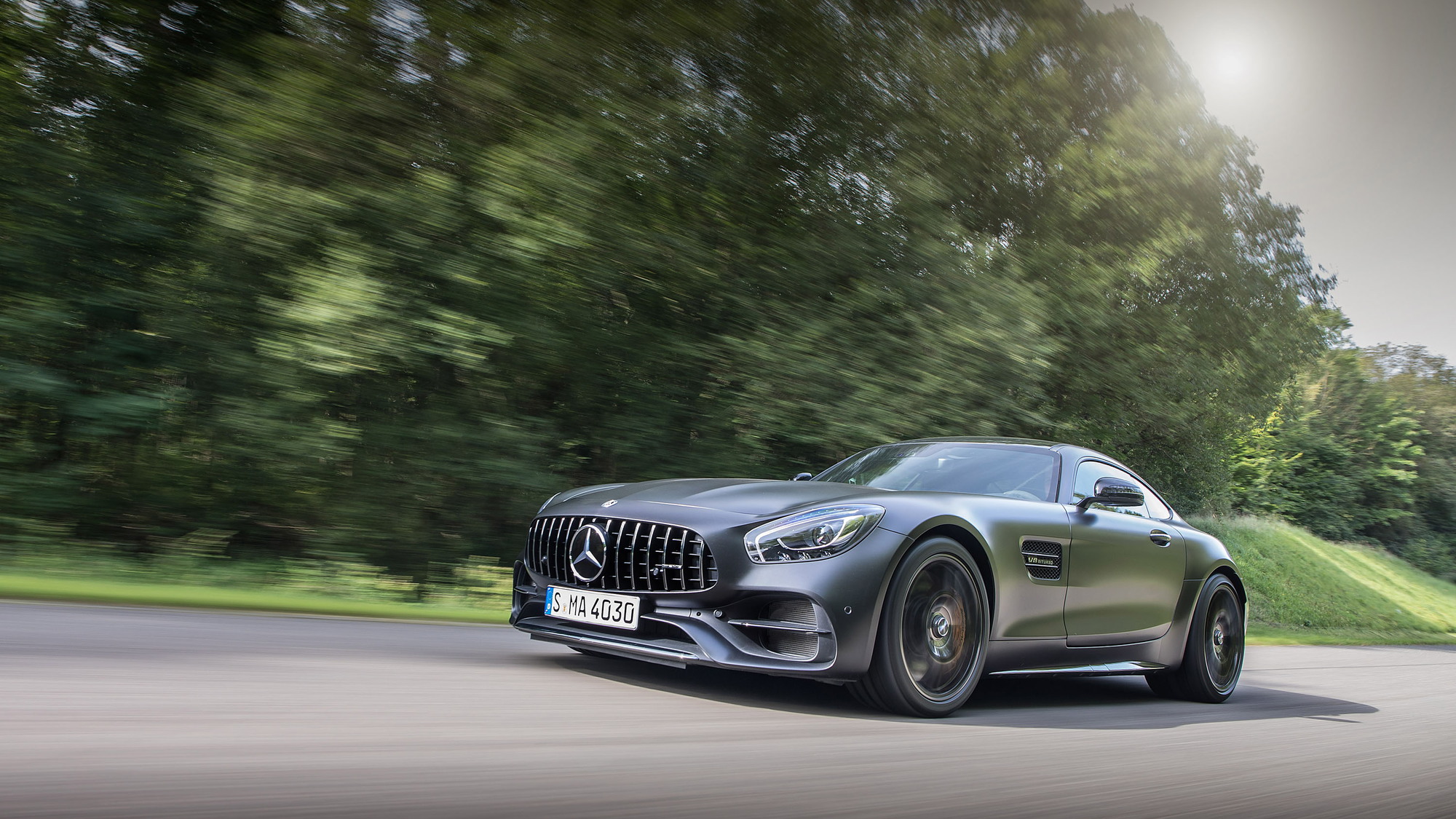 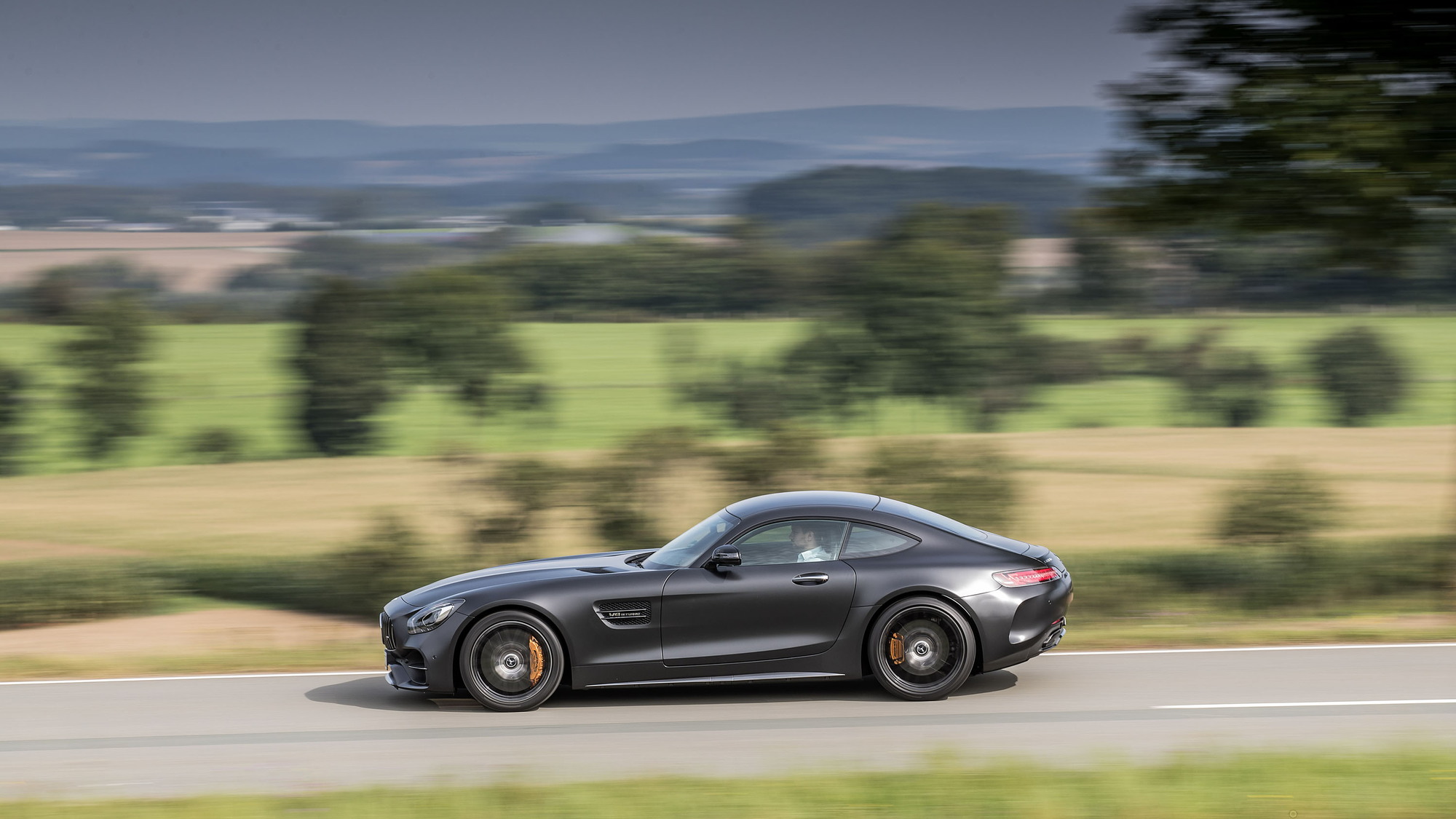 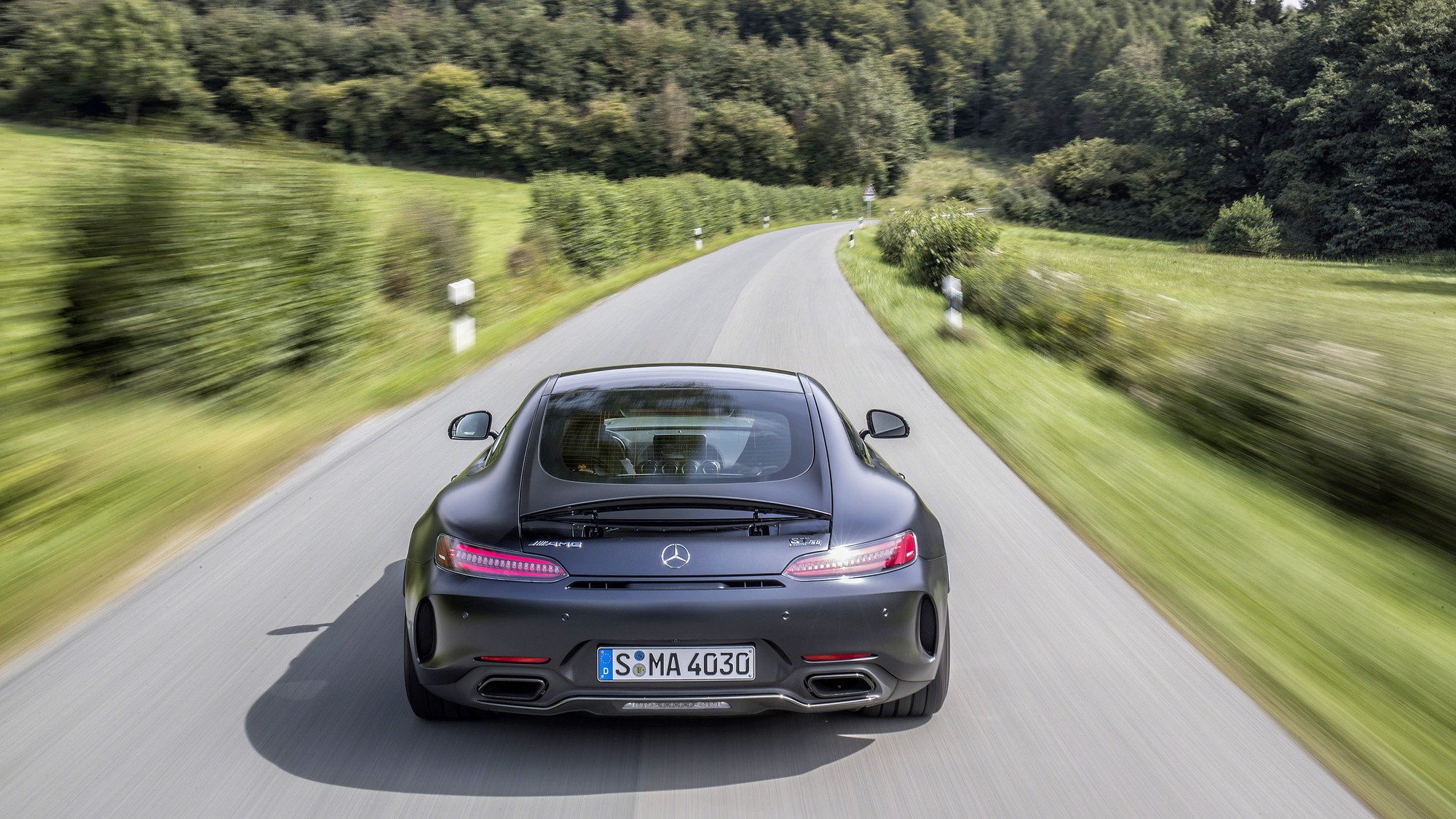 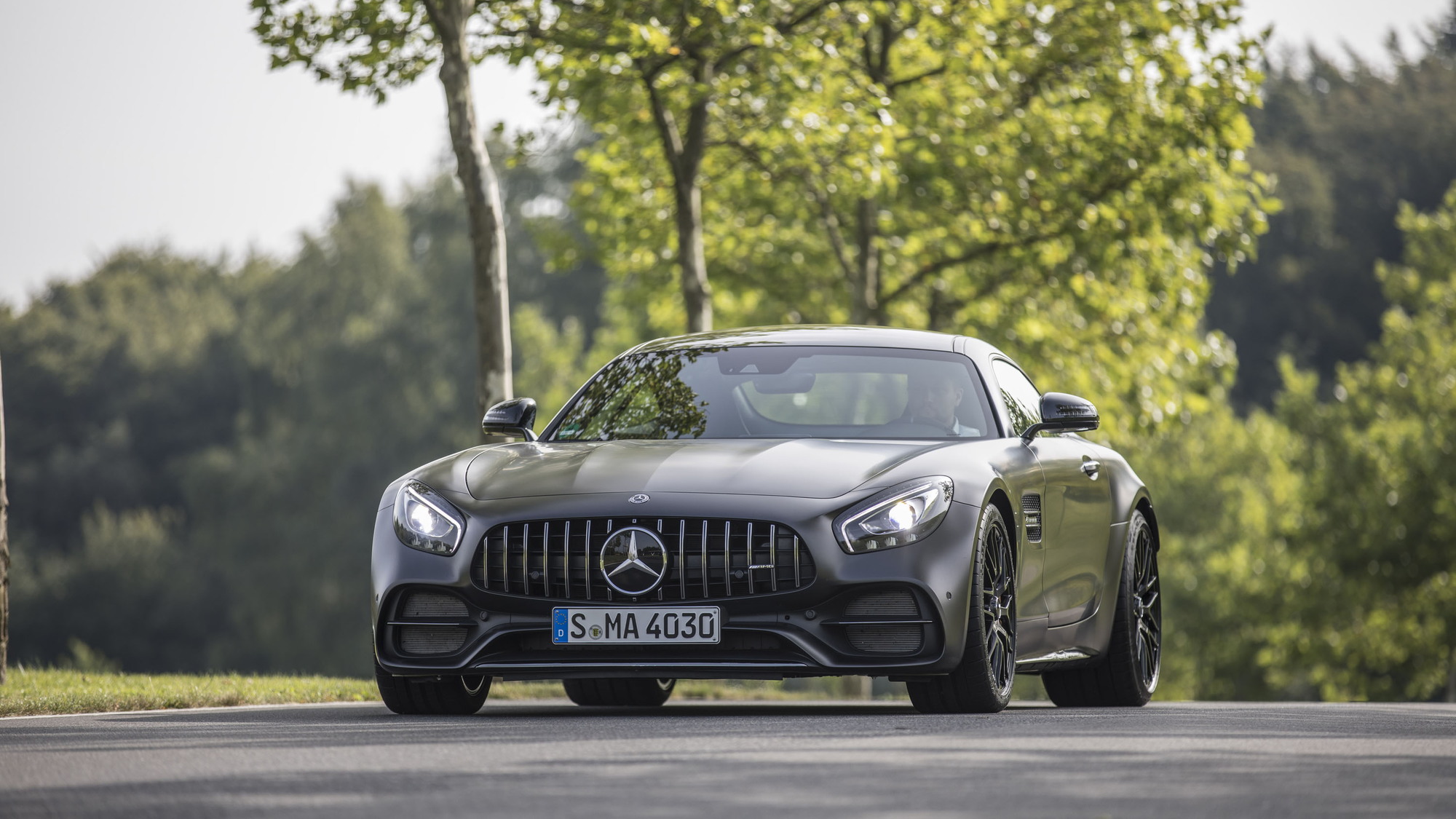 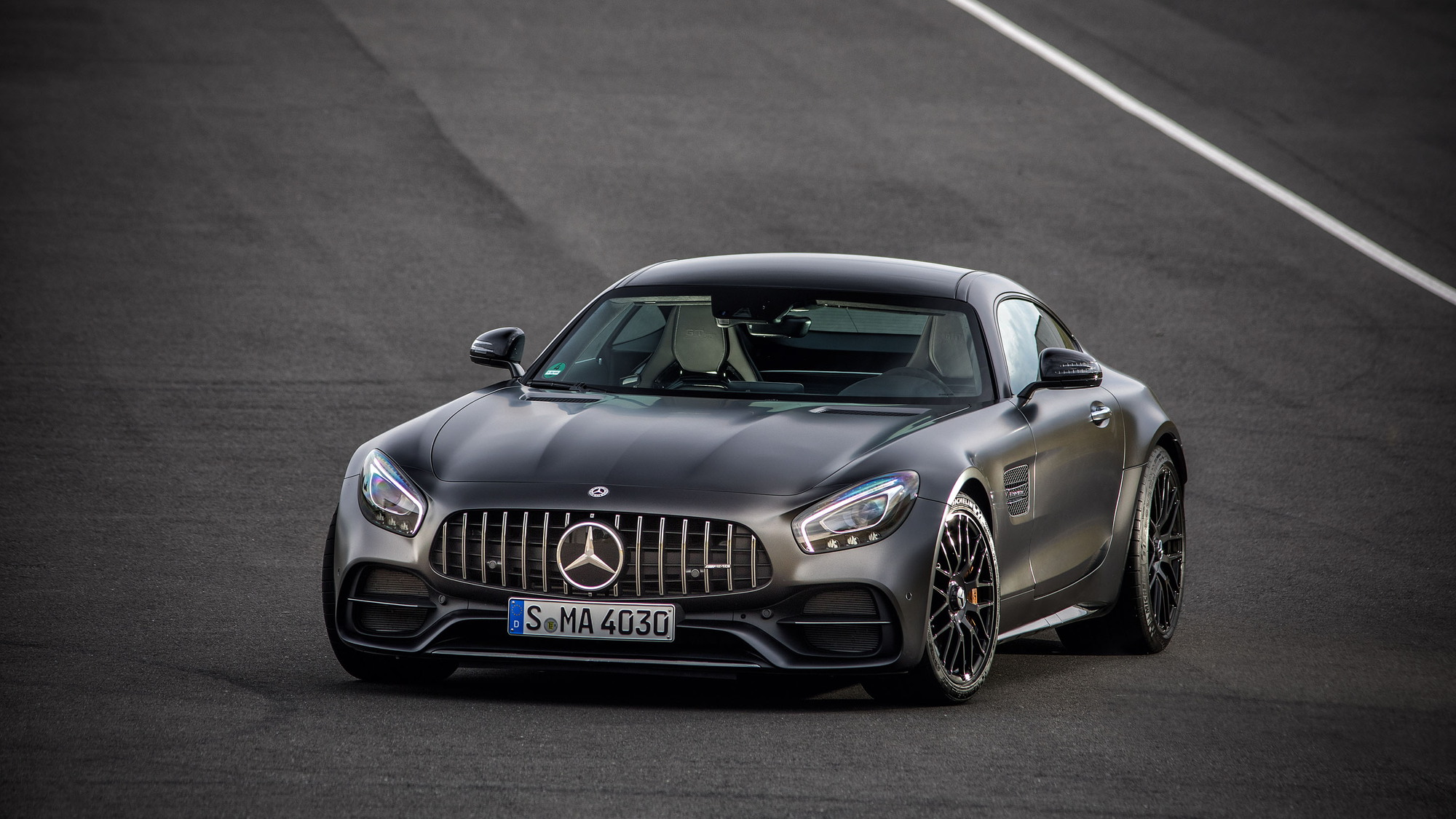 Mercedes-Benz and Porsche have not always been adversaries. The two German automotive icons, hailing from east and north of Stuttgart, Germany, respectively, were once occasional collaborators.

Not that you’d know that from behind the wheel of the 2018 Mercedes-AMG GT C coupe.

This squat, wide, coupe is the range-topper in the AMG GT lineup, at least for mere mortals with around $140,000 to spend. Sure, there’s the track-oriented AMG GT R with its signature yellow knob to dial back its traction control sitting pretty at the top of the lineup. But if you live where the roads are curvy, the GT C is the one you’ll probably want.

We’ve already driven the GT C in droptop form, but a hardtop is inbound. It’ll first launch early next year as the Edition 50, a limited-run model offered as both a convertible and a coupe with matte black or matte white paint, lots of yellow touches, and a silver leather interior. A regular AMG GT C coupe available in your choice of hues will follow.

It’s what AMG product manager Nadine Bottner calls a “gift” to the faithful to celebrate 50 years of hot-rodded Benzes. The Edition 50 is gaudy, but this car isn’t about subtlety in the way that a correctly optioned Porsche 911 can be.

Instead, with the GT C, you’re getting a twin-turbo V-8 that sends its 550 horsepower to the rear wheels via a 7-speed dual-clutch automatic transmission. It’s up more than 80 hp over the base AMG GT and 35 hp above the GT S, but the GT C also has a wider stance with meatier 12.0-inch wide rubber out back, a rear-steer system, and an electronic limited-slip differential. The coupe is the same as the roadster, only a little cheaper (figure around $15,000 less, although Mercedes hasn’t yet announced pricing) and a little lighter (about 75 pounds).

The GT C’s exact positioning against the 911 lineup is hard to place, though. Its power output straddles the gap between the 911 GTS and the 911 Turbo. It handles more like the latter, but with a decidedly different flair. The GT C’s engine is mounted way back under the long hood, nearly in the dashboard. Its interior is tight, with a seating position that’s nearly on the ground and a view out far more compromised than the 911. A wide center console emphasizes the fact that this car is an evolution (a big one, admittedly) of the AMG SLS. It’s like a Viper with more sound deadening. Cue up the conspiracy theories in 3, 2…

The AMG GT C’s three-spoke steering wheel has a direct line to the front wheels, but the rear wheels have about 1.5 degrees of toe that lets them tag along with the fronts at higher speeds for better cornering stability or to work against them around town for improved maneuverability. It’s not nimble, but it is predictable and ready for fast inputs from the driver. It’s the kind of car that allows you to be indecisive in the nanoseconds before you enter a curve without things going awry.

Where the AMG GT C is most akin to a Porsche is in its ride quality. The adjustable dampers standard on the AMG GT C replace the base model’s trick Multimatic units. There’s an extra, stiffer mode here than what you’ll find in the GT S, but the GT C never felt too harsh on our drive around Paderborn, Germany. It’s not a featherweight, but it is all-day comfortable.

GT Cs include as standard a sports exhaust activated at the tap of a button. In quiet mode, it’s as silent as a C-Class. Turned on, the exhaust snarls and snaps. A hastily recorded version of it is now this writer’s ring tone and you’ll probably want to do the same.

The AMG GT C is enthralling, but it forces certain compromises not forced by Stuttgart’s other sports car builder. In addition to the AMG GT C’s quirky ergonomics—you can tap its A-pillar with your left hand on the steering wheel—there’s not much GT-like usability to its two-seat interior or even its cargo area. Turn your head and you’ll find a wall of carpeting directly behind you, not a place to stuff this week’s groceries like you’ll find from a 911.

There’s a lot that Mercedes could learn from Porsche, at least when it comes to usability. And with the AMG GT C, we’re learning that Porsche could learn a thing or two from the three-pointed star.

Perhaps they should meet for coffee on neutral ground in Stuttgart.