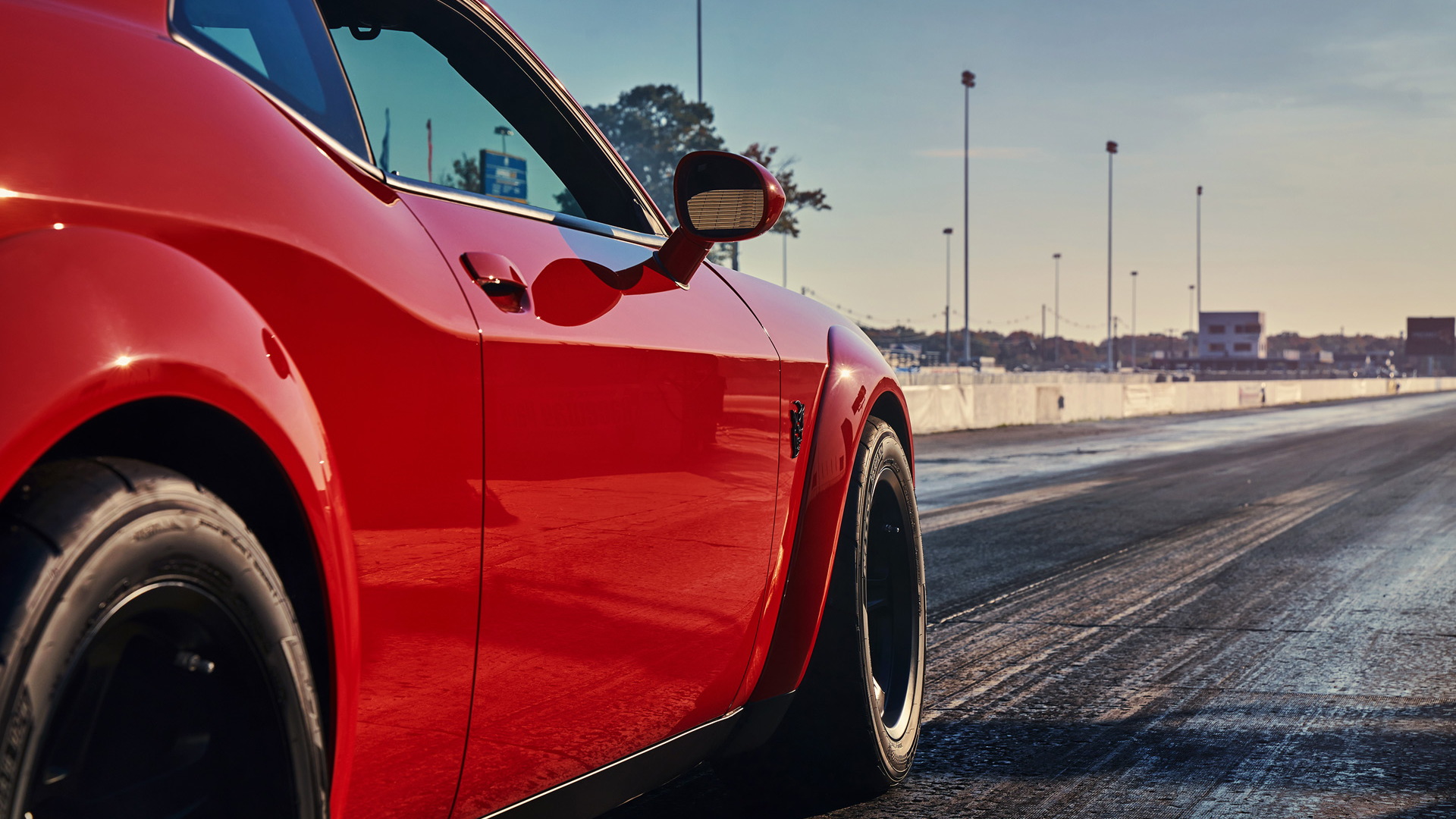 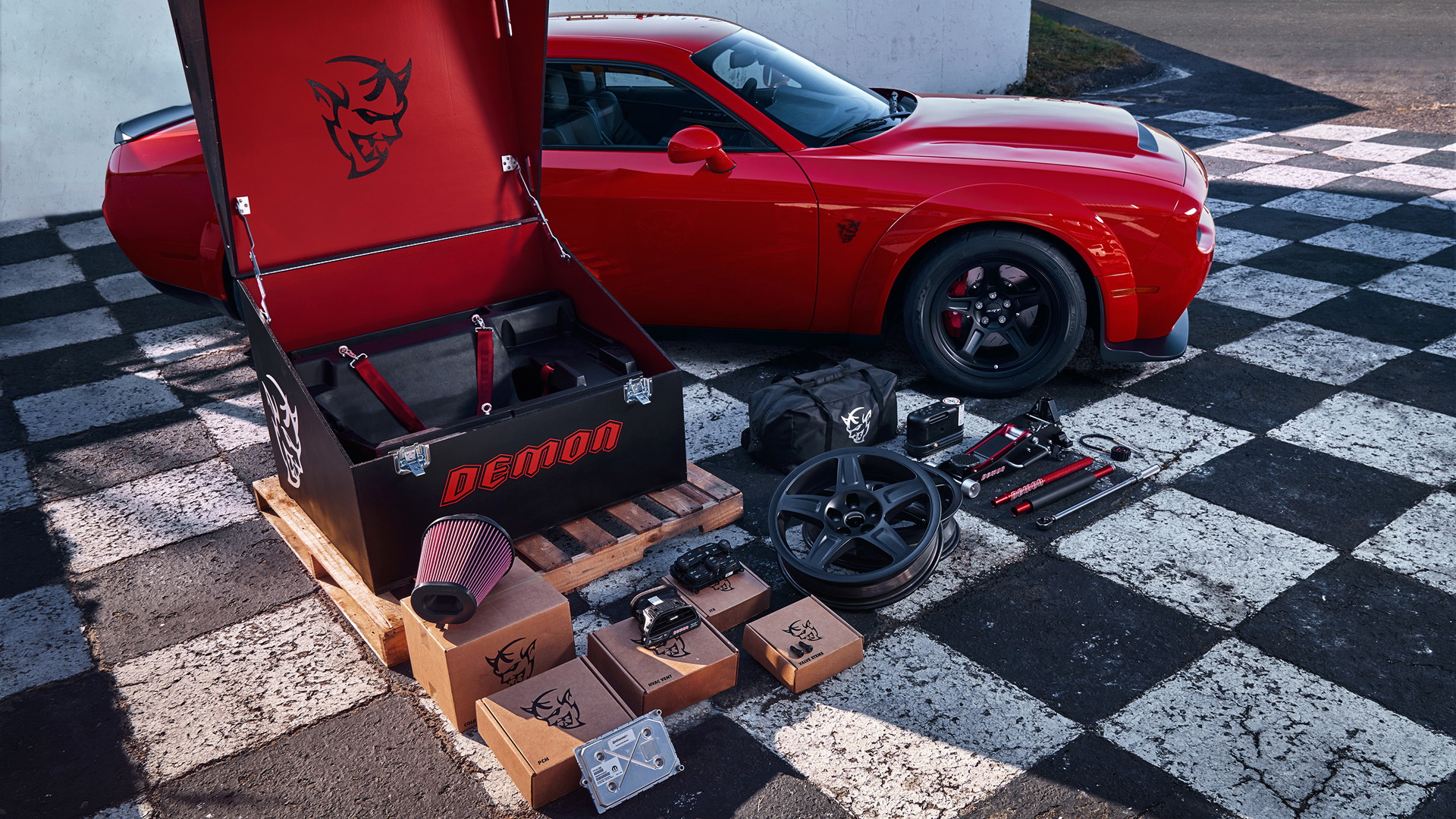 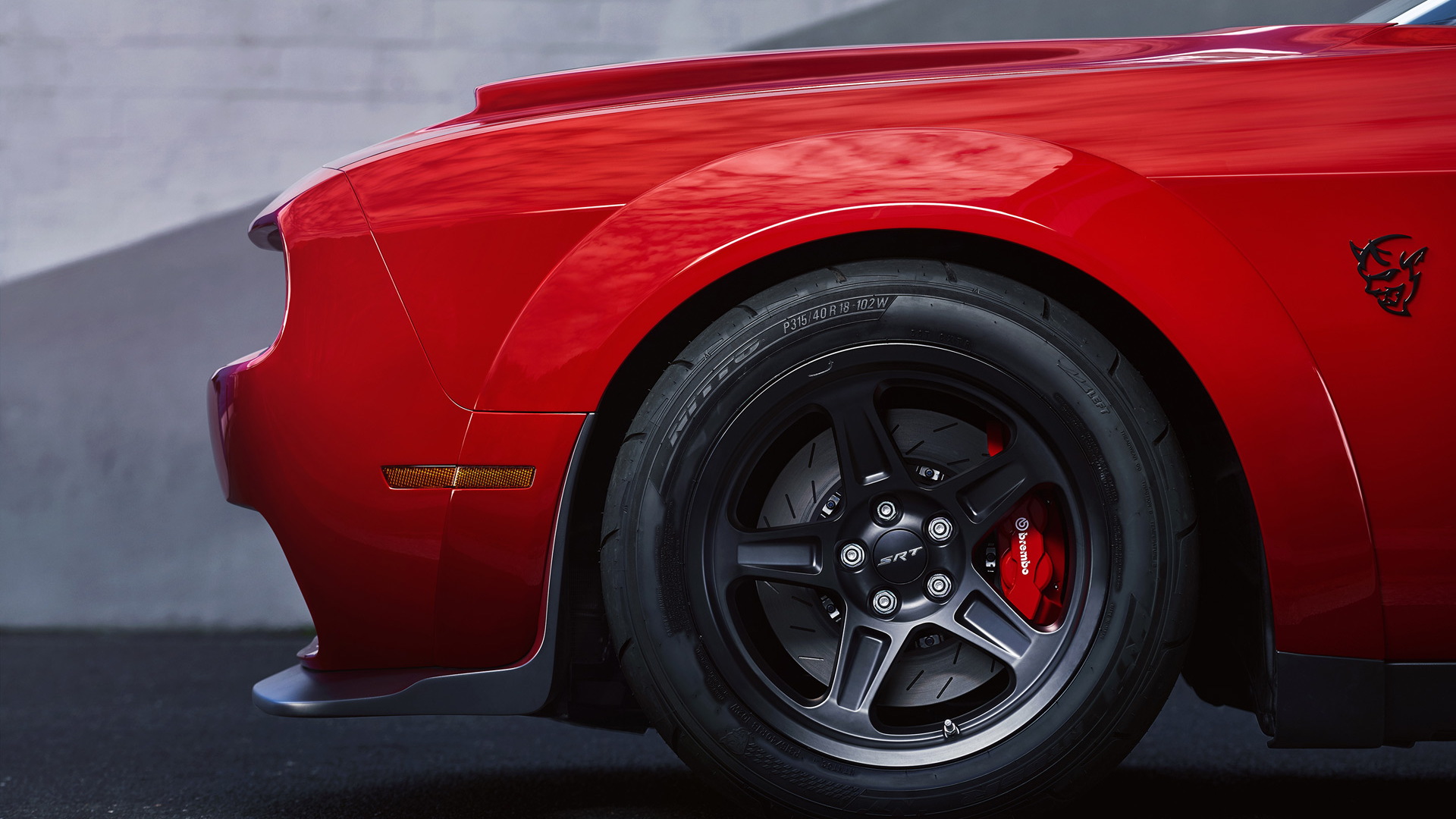 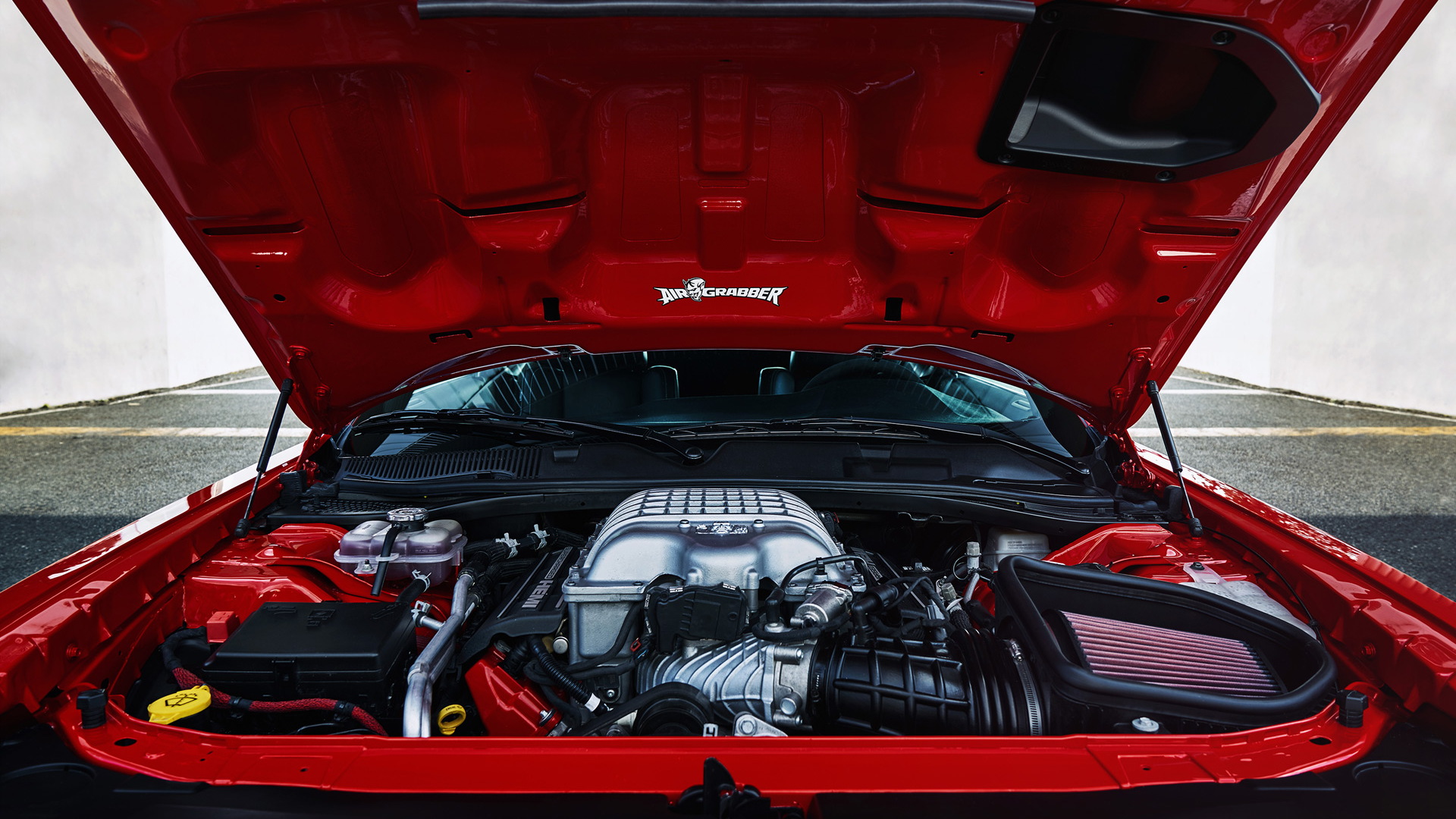 “You guys are crazy.”

After learning about all the engineering work that went into this street-legal drag monster, we agree.

The Demon is to the Challenger what the ACR is to the Dodge Viper—the ultimate expression of the Challenger's DNA. Understanding that explains some of the breathtaking engineering SRT put into this car. Under intense secrecy and compartmentalized development, Kuniskis and Cowland drove the Demon forward, rebuilding the most important parts of the Challenger SRT Hellcat to surge down dragstrips in a way no warrantied, street-legal production car can.

The powertrain is an evolution of the Hellcat's with some truly revolutionary changes. This is still a 6.2-liter supercharged V-8, but instead of 707 horsepower and 650 pound-feet of torque it can produce up to 840 hp and 770 lb-ft, because there's more everything. But all these changes are in the name of three goals—getting air into the engine, cooling that air down, and figuring out how to get the most from each gram of fuel.

Shoving more air into the engine is where all the sexy changes were made, starting with the Demon's gaping hood scoop. SRT claims it's the largest functional scoop on the market, spanning 45.2 square inches. But if the Demon's hood scoop is its mouth, the 14.8-liter air box are its lungs, inhaling 173 cubic feet of air over a typical quarter-mile sprint. That's the lung capacity of you and your 815 closest friends. A larger filter with 72 percent more area funnels the air to a bigger supercharger.

That wondrous supercharger sounds like a million piccolos being played through the blades of an industrial fan; it displaces 2.7 liters compared to the Hellcat's 2.38. Inside its aluminum casing, the fan blades are 1.1 inches longer, force-feeding air to the engine at 14.5 psi of pressure, 2.9 psi higher than the Hellcat.

But getting the air into the engine is only part the battle. A new SRT Power Chiller repurposes the Demon's standard air conditioning to cool the charged air by 18 degrees Fahrenheit before it enters the combustion chamber. The system alone is responsible for 15 hp.

Once the air is in the combustion chamber, it mixes with more fuel. SRT increased the fuel pressure to 700 kilopascals, a 27-percent increase over the 550 kpa in the Hellcat. At full chat, twin fuel pumps force gas through larger fuel lines and out of the injectors at a rate of 1.36 gallons per minute. For comparison, a high-efficiency shower head has a flow rate of 1.5 gpm.

A highlight of the Demon's impressive fuel system is the optional Direct Connection Controller. Part of the Demon Crate, this powertrain control module allows the engine to run on 100-plus-octane race fuel, unlocking the full 840 hp and 770 lb-ft of torque. On typical pump gas, there's still 808 hp and 717 lb-ft of torque, but since the Demon Crate costs a mere dollar, virtually every Demon should be able to run on race gas. SRT recommends Sunoco 260GT or VP 101 race gas.

Even if you mix gas, the Direct Connection Controller will take care of you, monitoring the knock sensors to guarantee the octane level is appropriate. If it drops too low, no High Octane mode for you.

To keep the engine cool, SRT doubled the flow of the piston cooling jets. Along with other enhancements, the Demon's cooling systems rejects 258 kilowatts of heat, almost double what the base Challenger's 3.6-liter V-6 does. Putting the Demon's cooling power into perspective breeds some hilarious facts. For example, apply 258 kilowatts of heat to a quart of water and it'll boil in just 1.2 seconds.

Despite its high-performance nature, SRT retained the mainstream wet-sump lubrication system. While powertrain boss Chris Cowland said the cost of engineering a dry-sump system played a role, packaging a multi-pump oil system in the 6.2-liter V-8 wasn't practical. Still, SRT tested the oil pan up to 1.8 g and increased the oil flow to the cylinder heads by 33 percent.

The engine's power reaches the road via a shorter final drive ratio, 3.09, to aid acceleration. Alongside the TransBrake and Torque Reserve systems that Tim Kuniskis detailed for Motor Authority at the New York auto show in April, SRT added a 20-percent thicker prop shaft and heftier half shafts.

There is a quirk in the transmission, though. The 8-speed box can snap off gear changes in 200 milliseconds in Track mode, which is very quick. But in Drag mode, which is the Demon's bread and butter, shifts take 400 milliseconds, and yet it's still faster. The trick is what SRT called "AMAX shifts," which limit the torque cut during gear changes, allowing the Demon to maintain acceleration down the chute.

With all of these systems engaged, it's time to take off. Over 2,500 pounds of weight shifts from the front to rear axle under a launch, and that's where the Demon's huge tires come into play. The Nitto NT05R drag radials ride on 18x11-inch wheels—the contact patch is 15 percent bigger than that of a Hellcat. The stickier, wider rubber addresses the Hellcat's lack of grip. At the very least, SRT says the drag-radial-equipped Demon's launch force is 40-percent higher.

Yes, the Demon is a street-legal drag car, but calling it that is like describing Gordie Howe as just “a hockey player”—sure, it's technically true, but it does the work of SRT's engineers a real disservice. If you want to describe the Demon as anything, you should call it a halo car.

According to Tim Kuniskis, the Demon started as a car called the ADR (American Drag Racer), which was quite simply a 10-second muscle car. “[ADR] was a Hellcat Plus. It wasn't going to be enough to break beyond the core group of enthusiasts," Kuniskis told Motor Authority. “Awesome car, but it was never going to break over and get the guy across the street driving a Camry to go 'Whoa.' ”

The halo effect also extends to the parts. Asked about the potential of a trickle-down effect from the Demon's high-performance systems, Chris Cowland told MA “Some of the tech may not be used in the same form, but there are benefits to something like the [SRT Power Chiller] in high efficiency and high power engines. Sometimes, to put some of this tech into a vehicle where you're going to do 500,000 of them can be difficult, but doing it in low volume is a little bit easier.”

These comments are key to understanding the almost fanatical work behind this project. The Demon is a showcase for the company's engineering abilities wrapped in a package that can do wheelies.

Correction: A previous version of this story called the original Demon concept the 80R. It should have been ADR, short for American Drag Racer. The story has been updated to reflect this correction.