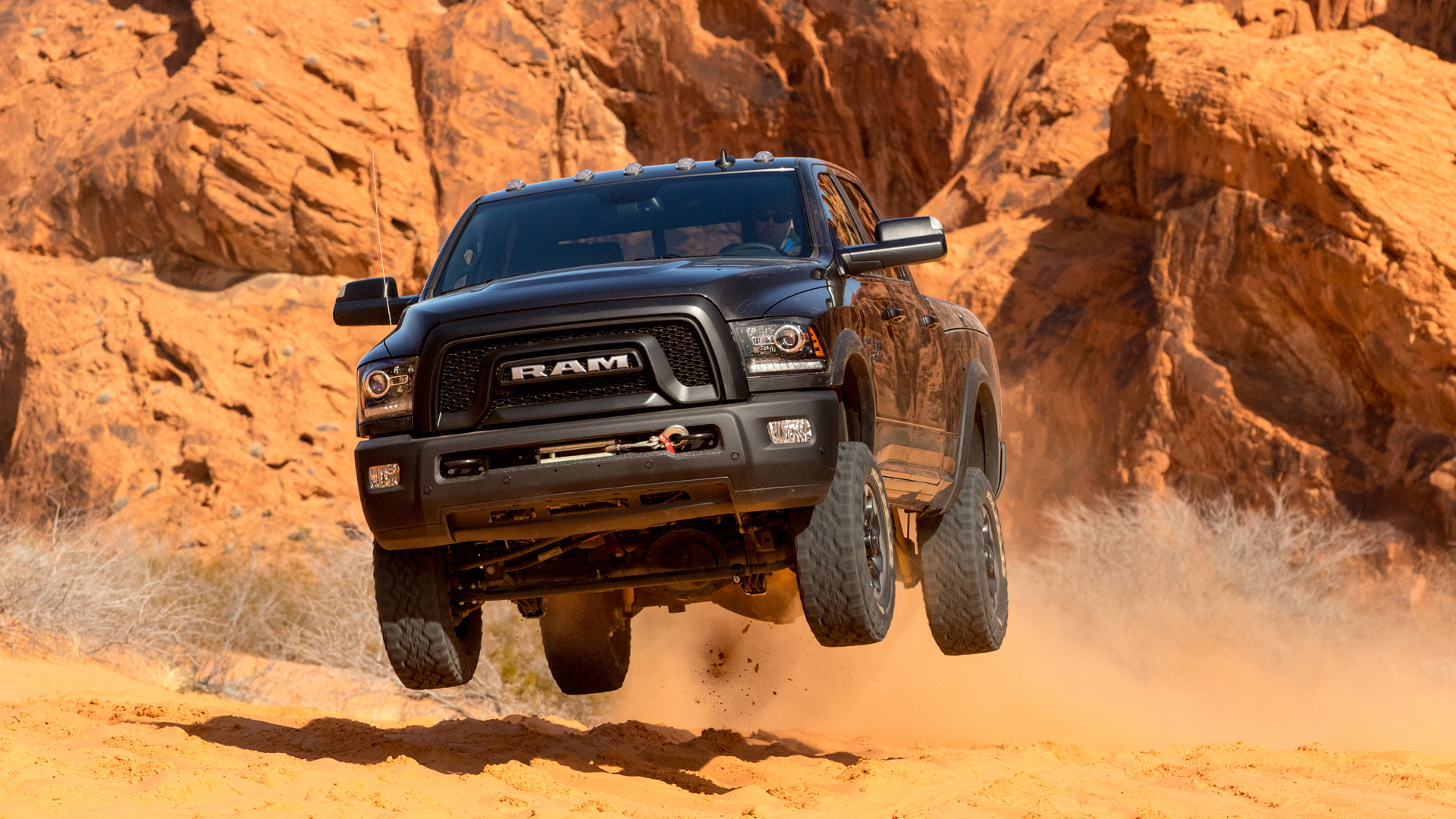 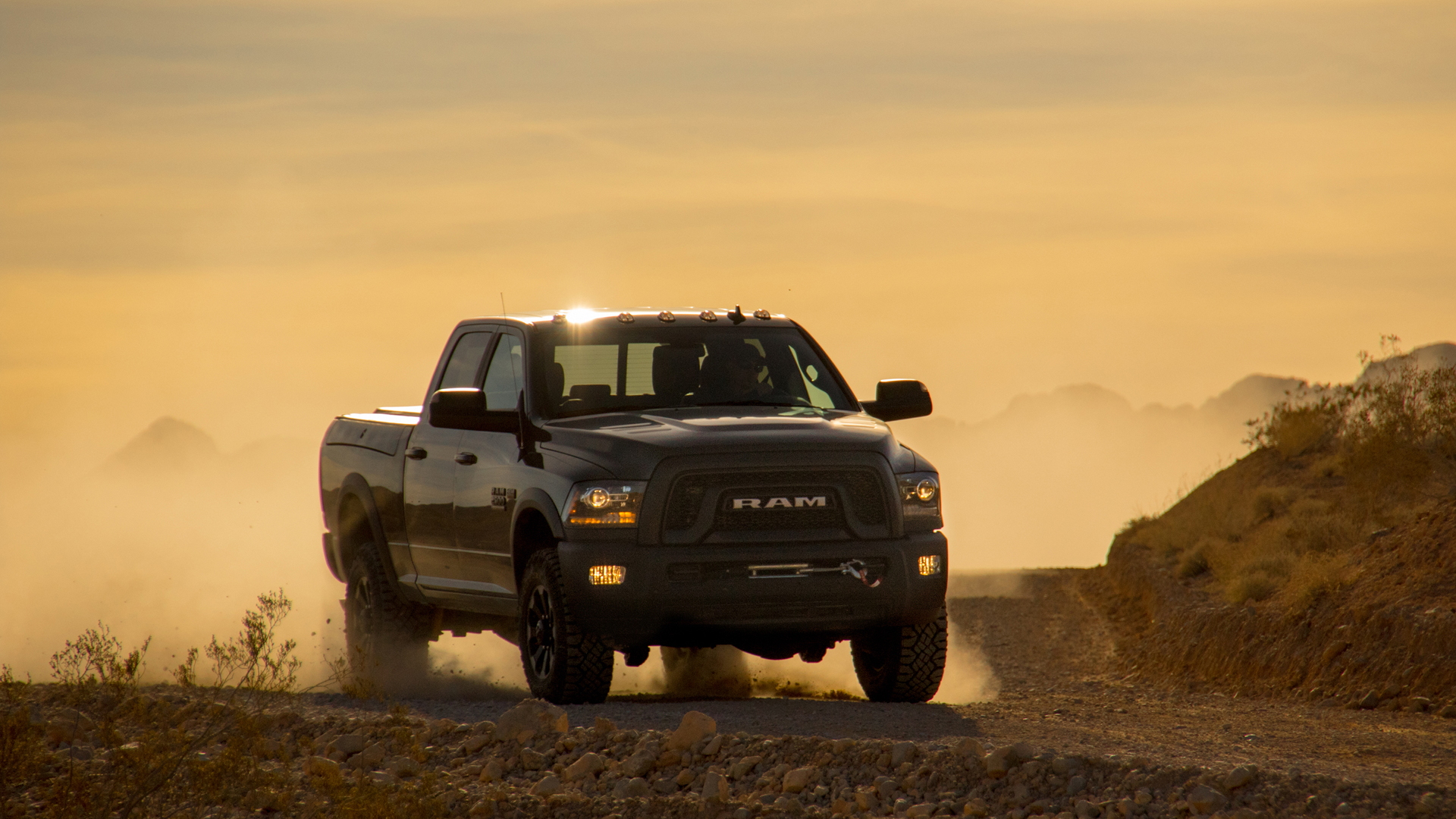 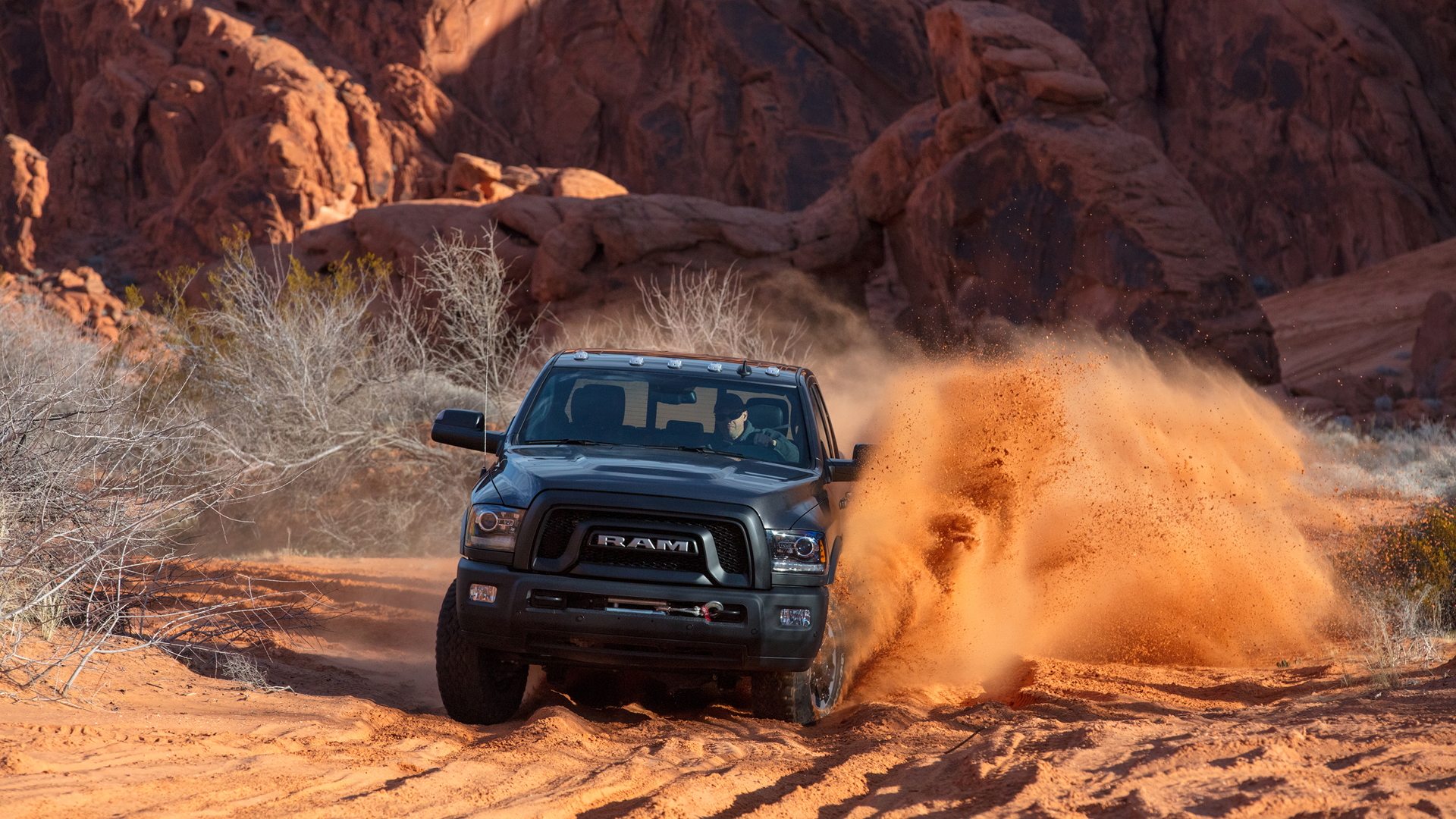 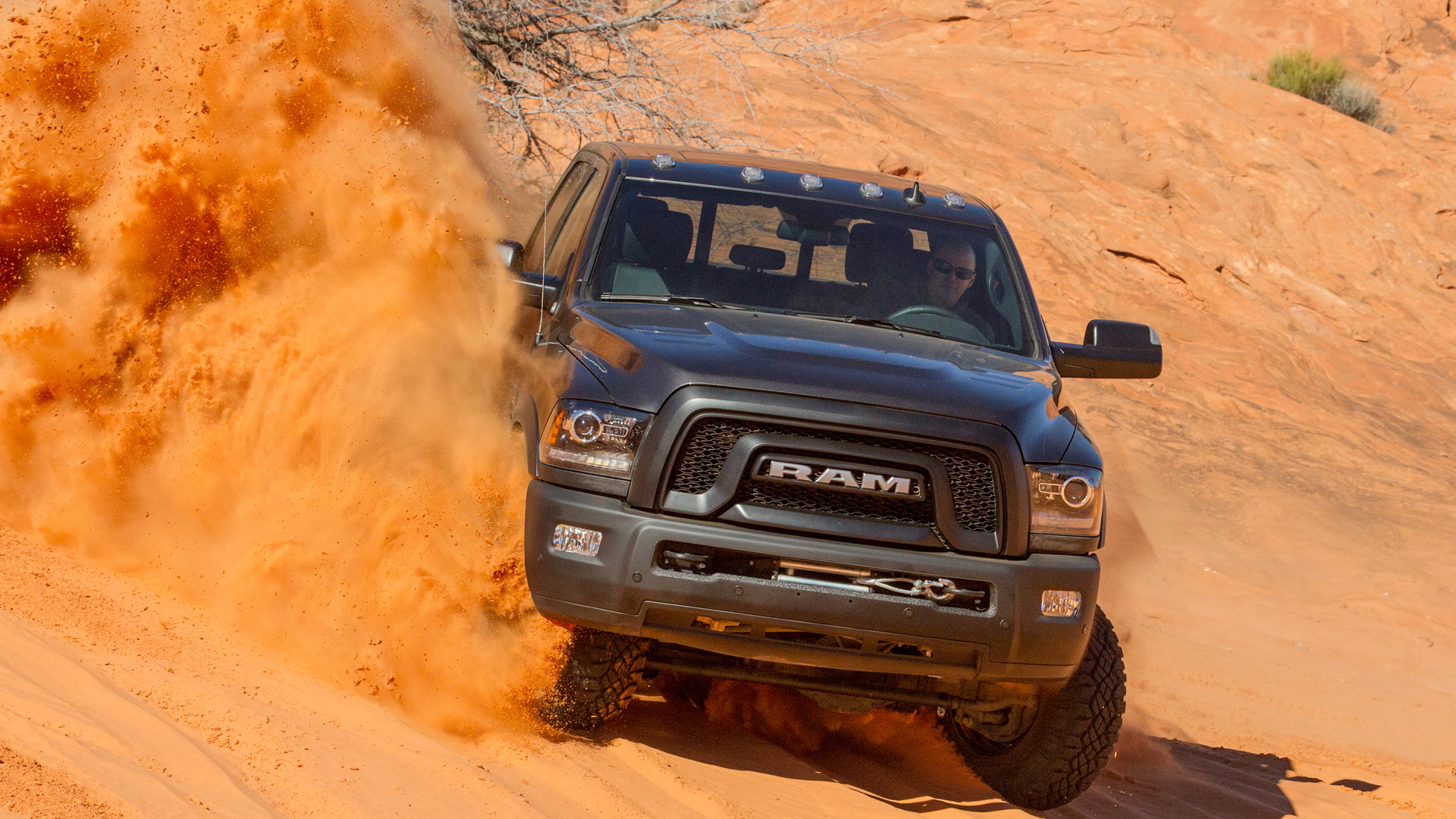 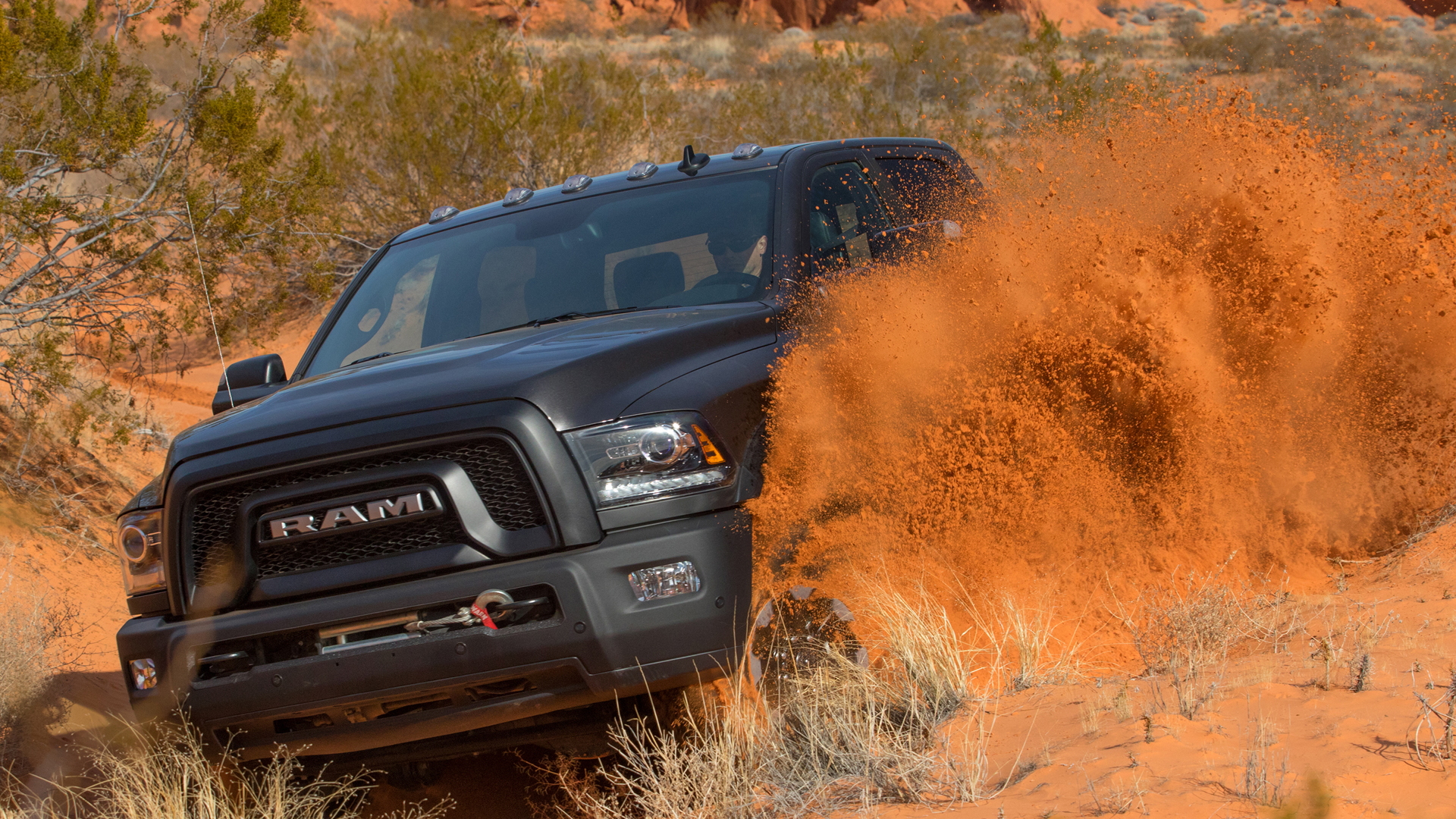 Las Vegas – If it were a teenager, it'd do things just “for the lulz.” Fiat Chrysler is starting to take that approach, and it's making this Italian-American brand one of the most absurd automakers on the market. CAFE standards? Start stuffing a supercharged, 6.2-liter V-8 into everything. Financial struggles? Pour money into a single-seat, street-legal drag special. And while the market is clamoring for crossovers, FCA is updating the Ram Power Wagon, a truck so ridiculous that no rational person would buy one. But plenty of lunatics will love it.

Here's a 7,000-pound, 20-foot-long pickup truck that's able to scale rocky, uneven surfaces, but not as well as a Jeep Wrangler. The Power Wagon can handle desert sands at speed, but it’s not as poised as a Ford F-150 Raptor. And the 2500-based truck can tow perfectly well on paper, but it's not as capable as other three-quarter-ton Rams. In other words, spending $53,015 (including a staggering $1,320 destination charge) on a Power Wagon makes no sense. And God, I'm so happy Ram builds it.

The Ram Power Wagon is a gleeful bit of automotive nonsense, starting with its brutish exterior. While it's available in a boring and relatively affordable Tradesman trim that adheres strictly to the Power Wagon aesthetic of yesteryear--five-spoke chrome wheels, a brawny cross-hair grille, more than a few ram-head logos, and graphics packages nearly as extreme as the Power Wagon's performance--I recommend selecting the pricier model. Formerly called the Laramie Power Wagon, Ram dropped the Wyoming town from the truck's name, as well as all the aforementioned styling staples, for 2017.

According to Ram, the Power Wagon’s designers wanted to create a visual connection between the 1500-based Rebel and the 2500-based off-roader. Like the smaller truck, black is a dominant trend. Aside from the billet silver Ram badge on the nose, the grille, grille surrounds, bumpers, and wheel arches wear an anodized-black look. It's commanding, especially with one of the truck's lighter shades of paint.

But the designers didn't stop with bumpers and grilles. The headlight bezels are black, while the rear taillights have a smoked look. And of course, prominent black decals on the carryover hood, at the front of the bed, and along the bottom of the doors (all removable at no additional cost) let other drivers know what's up. Finally, those five-spoke wheels? Replaced, in favor of 17-inch alloys with eight spokes, the better to match the standard 2500's eight-lug bolt pattern.

The cabin looks lovely, but I encountered a major functional problem. The lack of a telescopic steering wheel ruins the seating position for longer-legged drivers. I'm 6-foot-one with most of my height in my legs. Because the wheel doesn't telescope, I had to sit so close that my legs were curled up beneath the steering column. The optional power-adjustable pedals could solve the problem, but my tester didn't have them. Without the adjustments, the hard brake pedal's high resting point kept my right ankle supinating for an uncomfortably long time. It hurt to the point that I selected neutral and locked in the parking brake whenever possible, just to give my sore foot a rest. Taller folks: Do yourself a favor, and spend the $145 on the optional power-adjustable pedals.

Complaints aside, the Power Wagon's seats are comfortable and supportive, so at least I didn't have to deal with back pain. Space in the back of the Crew Cab body is more than adequate for adults on long trips.

Ram applied a good bit of excess to the Power Wagon's mechanicals. Fitting for its off-road role, engineers tweaked the standard three-link front suspension and christened it “Articulink,” which sounds like the name of a Pokemon. The addition of some unique pieces, notably Bilstein shocks and an electronic sway-bar disconnect feature, gives the front suspension up to 26 inches of travel, providing some truly ridiculous levels of articulation. The five-link, coil spring rear suspension, meanwhile, also benefits from Bilsteins.

To further bolster off-road performance, Ram pairs a standard 6-speed automatic transmission that's nothing to write home about with a 2-speed Borg Warner transfer case. And unlike the namby-pamby push-button systems common on modern off-roaders, the Power Wagon uses a separate mechanical shift lever that serves up an old-fashioned mechanical clunk with the selection of low range (and encourages a few hairs to sprout on the driver's chest).

Above the transfer-case shifter is the dial control for the electronically locking front and rear differentials--full left to unlock, middle to lock the rear, and full right to lock up both axles--while a simple pair of buttons disconnects the sway bars. I salute Ram's layout, because getting set for off-road fun was so simple. A straight line can be drawn from the column-mounted shifter to the differential/sway-bar disconnect controls to the floor-mounted transfer-case lever. All the actions feet natural and logical. That's more than can be said for some of today's off-road systems, which often rely on knobs and myriad anonymous buttons.

With all this brawn, it’s only fitting that Ram selected the biggest Hemi V-8 in the Ram stable, the 6.4-liter producing 410 horsepower and 429 pound-feet of torque. Even with 3.5 tons of off-roader to move, the performance feels perfectly adequate. It is able to keep the truck rolling on the trails, serves up enough pace on the freeway to execute passes and merge with traffic on the freeway, and delivers the grunt to tow 10,030 pounds. It sounds lovely too, with just a hint of the Hemi engine's muscle-car heritage higher in the rev range. Despite the awkward seating position, it's easy to maintain steady, consistent pressure on the gas pedal to prod the truck along confidently on tricky trails.

Getting to the Logandale Trails System outside Las Vegas, where I took the Power Wagon into the dirt, required a boring interstate grind, followed by a relaxing run through Lake Mead National Recreational Area. Despite its size--remember, 20 feet long and more than 6.5 feet wide--my Bright Silver Metallic and Brilliant Black tester handled the pavement well. I could easily tell where the Power Wagon's corners were, and the commanding ride height, sizable side-view mirrors, and low beltline meant visibility was good enough that the lack of blind-spot monitoring (or active safety systems of any kind, for that matter) was only a small annoyance.

While Rams boast among the most comfortable rides on the pickup market, the Power Wagon's tall off-road suspension isn’t as nice as that of the super-cushy Ford F-150 Raptor. The Ram is bouncier and responds more suddenly to imperfections. And unlike the Raptor, which does a fine job of hiding its body-on-frame construction, the Power Wagon's architecture is far more apparent, with road jolts sending shocks clearly through the truck's muscular body.

Unfortunately, nearly every truck that our group took to Logandale's dusty, shrub-lined trails finished the day with long scratches down that brutish body. While I'll acknowledge that some of these wounds were the fault of ham-fisted auto writers--perhaps even yours truly--the reality is that placing the big, wide Power Wagon on a narrow path is much more difficult than navigating the I-15 out of Las Vegas.

While the width was obviously an issue, the Power Wagon's length regularly interfered, preventing my codriver and me from negotiating even modest turns without hitting desert shrubs, on the higher-speed, sandy washes that occupied the first half of my day off-road. The problem was relatively easy to solve: just modify the line through the bend and cut speed. But the reality is that I wouldn't even need to think about the best way to negotiate these turns in a smaller off-roader.

Aside from the large turning radius, the Ram handled the sandy sections without drama. But it was on the rockier sections of trail where this big truck came into its own. See, while the Power Wagon might look for all intents and purposes like a competitor for the Ford F-150 Raptor, these two trucks are at completely opposite ends of the performance truck spectrum. The half-ton Raptor is essentially a road-going Baja race truck, with the high-performance, twin-turbocharged engine and super-soft suspension to match. It's best to think of the Power Wagon as a three-quarter-ton Jeep Wrangler with a big bed, roomy cabin, a Warn winch that can pull 12,000 pounds of whatever, and the ability to conquer the rockiest surfaces around.

Engage low range, lock the front and rear differentials, and disconnect the sway bars, and the Power Wagon's size is essentially the only obstacle it can't overcome. One section of trail forced my Power Wagon to climb a steep set of rocky steps before making an extremely tight left turn, climb more rocks, and then cross a ridge onto the next obstacle. It handled the steps well, but the overall length made the turns difficult to manage even with professional spotters. I would never even had had to bother with a three-point turn in a Wrangler.

The final challenge of the day was a zig-zagging climb up a rocky hill that brought all the Power Wagon's elements together while letting me ignore the truck's size. The flexy front suspension's 26 inches of articulation and 14.3 inches of ground clearance let it bound along the rocks like, um, a ram, while the 33-inch Goodyear Wrangler DuraTrac tires shined, offering sure-footed performance on the dusty path. Off-road and free from claustrophobic situations, the Power Wagon does nothing but inspire confidence.

At the same time, it inspires doubt. Doubt about why this truck even exists. Everything I did in the Ram, I could have done more easily, more confidently, and, possibly, more enjoyably in a Wrangler. Likewise, if you want a truck that looks as brutishly badass as this, Ram sells one in the cheaper, more manageable package of the 1500 Rebel. And while I didn't spend time towing, it's hard to look at the Power Wagon's 10,030-pound tow rating when similarly priced 2500s can pull thousands of pounds more.

This truck is not a rational purchase. It doesn't make sense, because it's not supposed to. It's just supposed to be excessive, and lately, that seems to be what FCA deals in. In many ways, then, the Power Wagon is like the Hellcat line. It's a delightful bit of automotive lunacy that doesn't impinge on your everyday life. It's a 7,000-pound, Hemi-powered escape pod. If you can acknowledge that, then the unnecessary Ram Power Wagon might be all the truck you need.

Ram provided travel and lodging to Internet Brands Automotive to bring you this firsthand report.