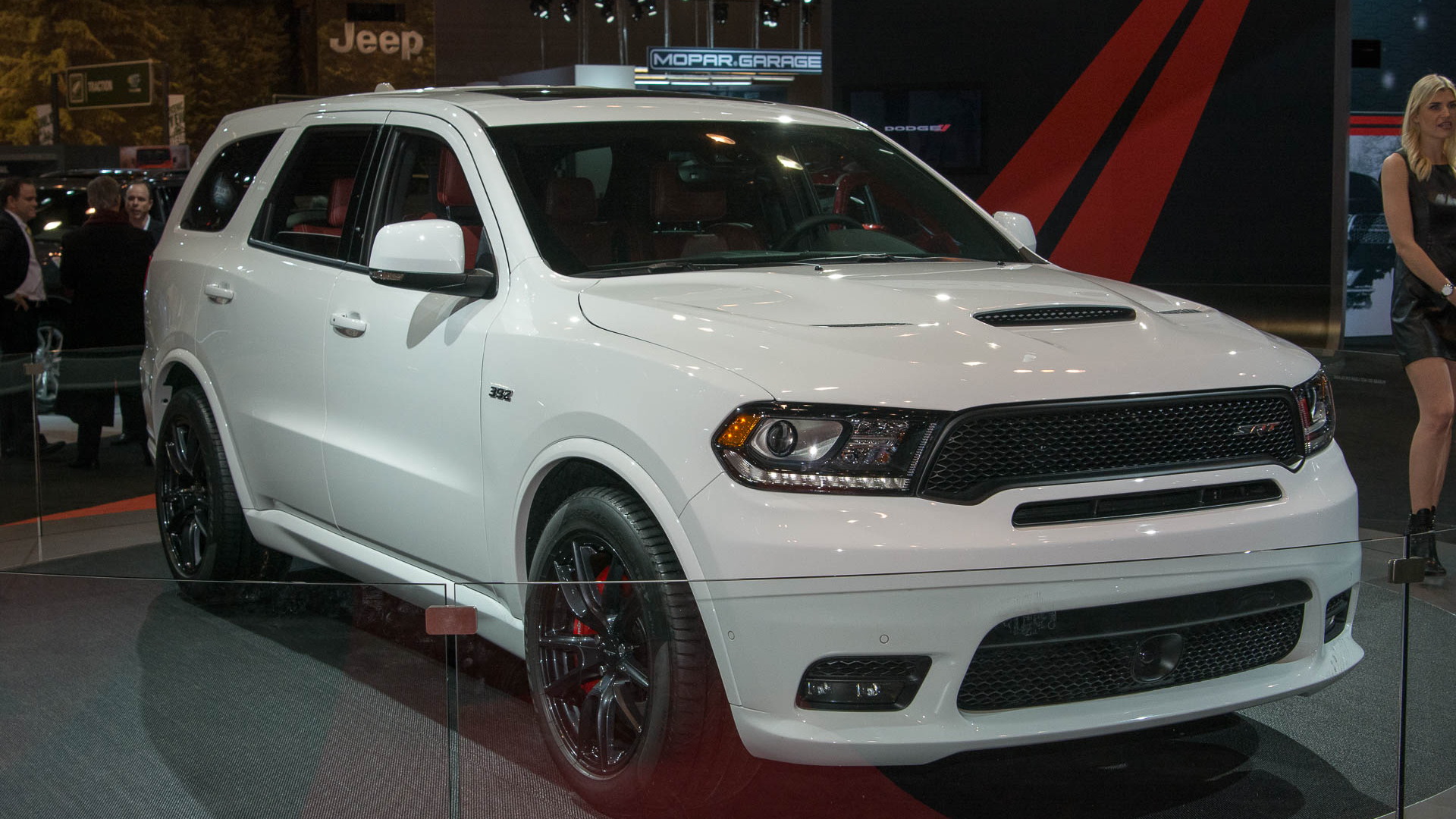 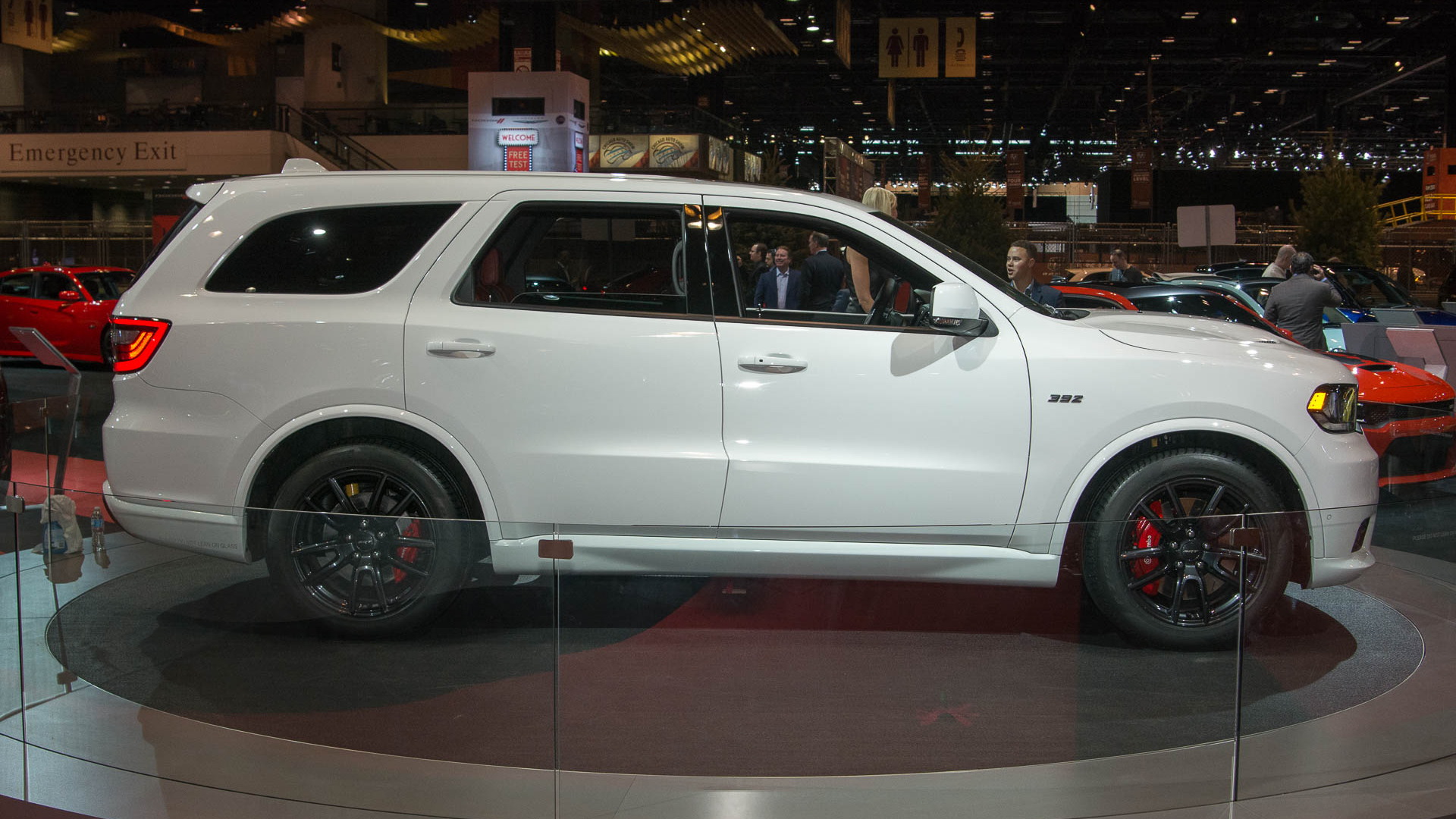 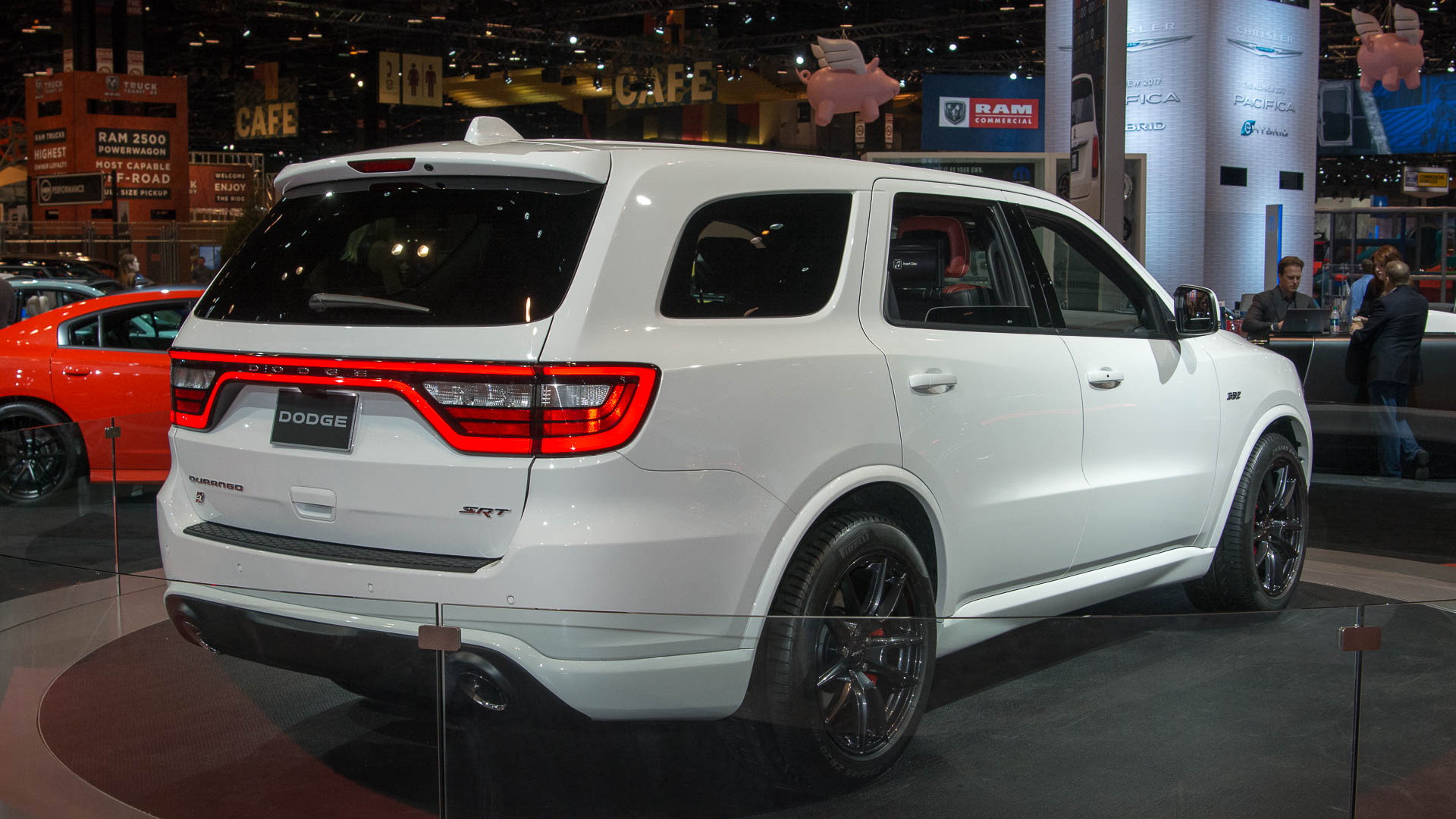 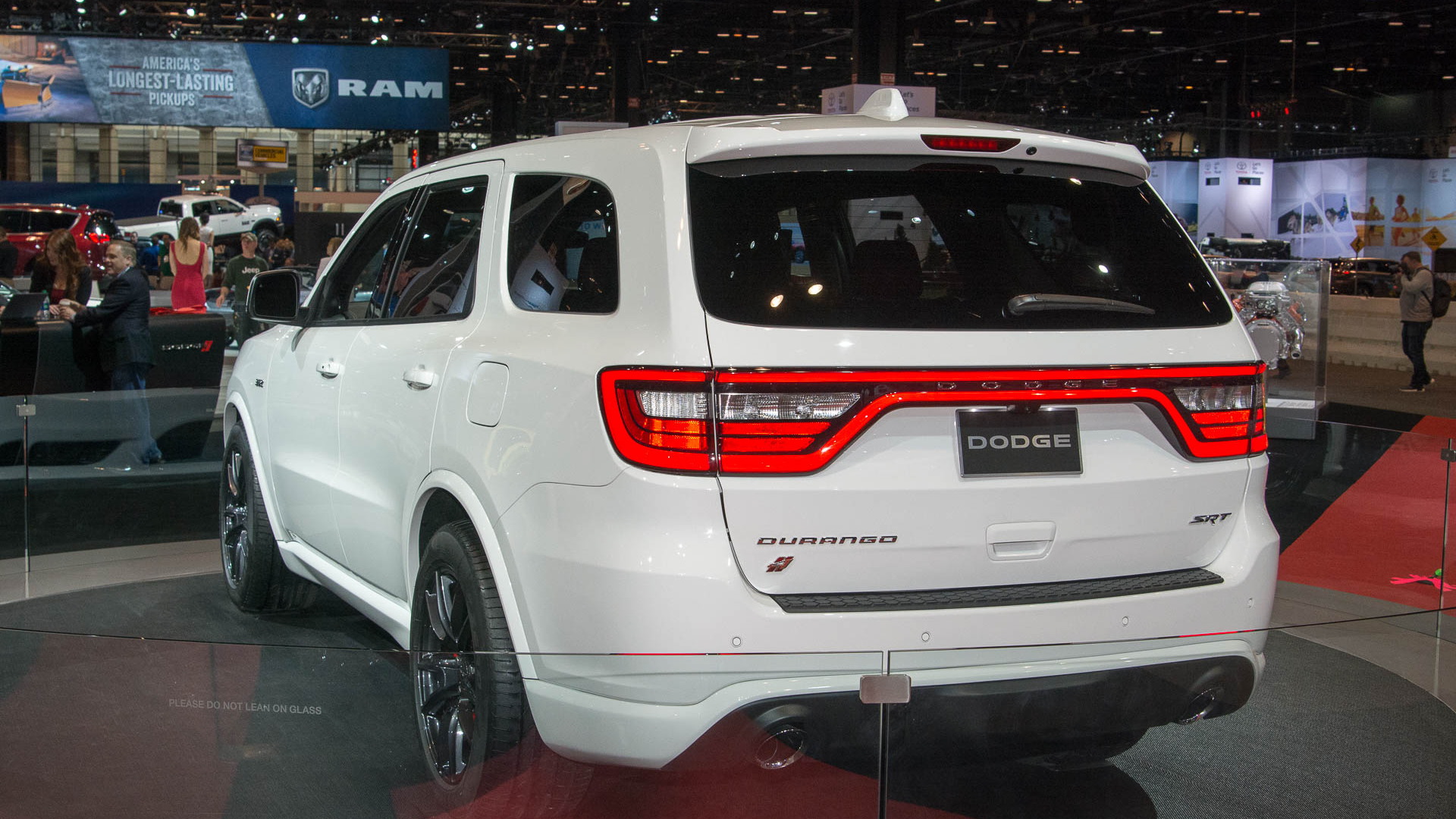 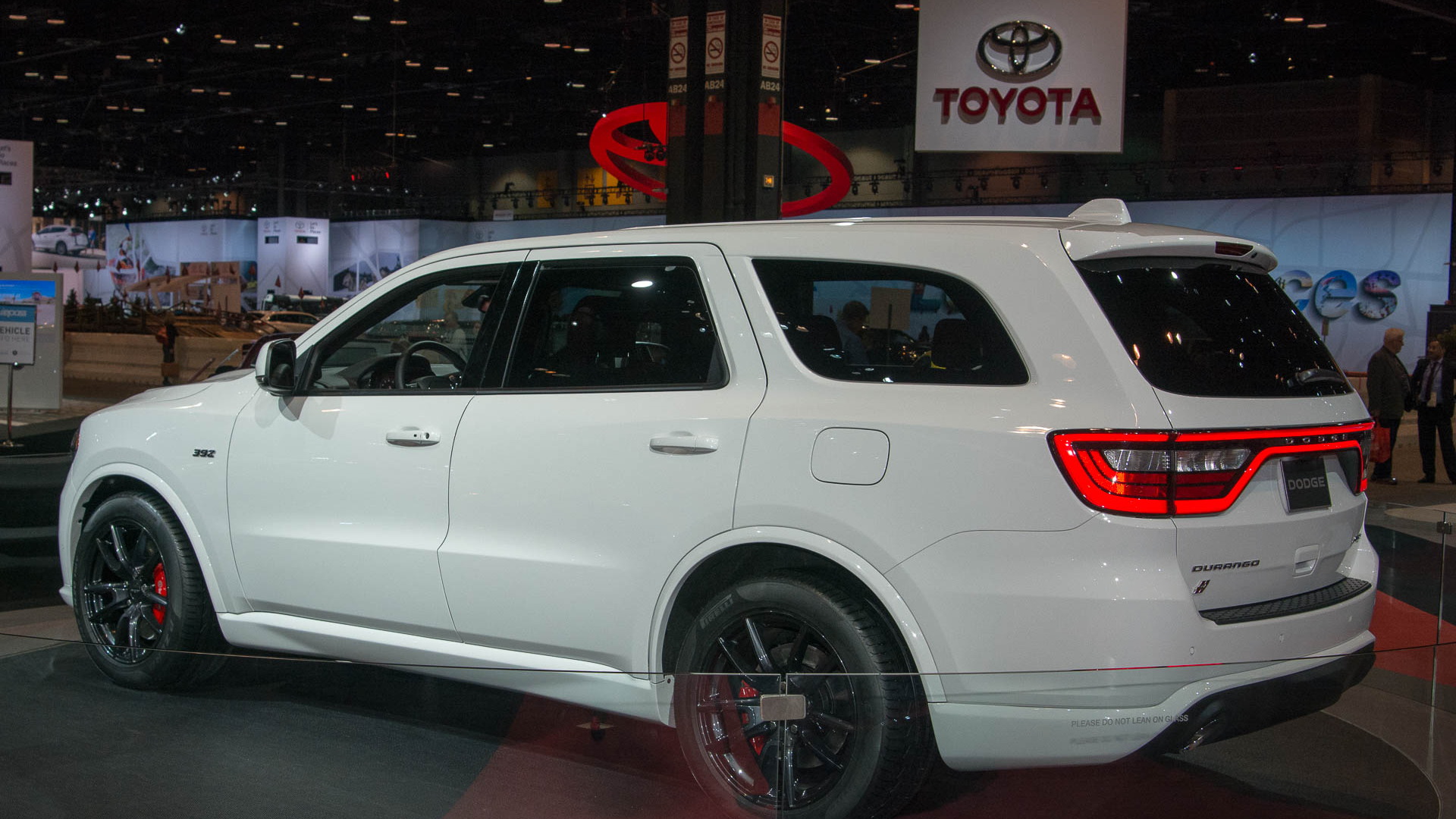 The Dodge Durango and Jeep Grand Cherokee share different versions of the same architecture. Yet, while the Jeep has offered a high-performance SRT model for two generations, the Durango never has. Now we have it. Just ahead of the Chicago Auto Show, Dodge pulled the wraps off the 2018 Durango SRT, and it's exactly what enthusiasts have been waiting for.

Under the hood Dodge has shoved its naturally aspirated 6.4-liter (392 cubic-inch) Hemi V-8 producing 475 horsepower and 470 pound-feet of torque. All that twist is sent to all four wheels through an all-wheel-drive system via an 8-speed automatic transmission.

Performance is stout for an SUV that weighs 5,510 pounds. Dodge quotes a 0-60 mph time of 4.4 seconds, and we are told it'll run the quarter mile in 12.9 seconds. That power also gives it the highest tow rating of any Durango in the lineup at 8,600 pounds as measured by J2807 standards. That even beats the Chevrolet Tahoe's rating of 8.400 pounds. Not bad considering the Tahoe is a full-size body-on-frame vehicle and the Durango is a midsize crossover with a unibody structure.

It sounds loud and proud because the exhaust was designed to mimic that of the 392 Charger with 2 3/4-inch metal pipes.

Cooling has been enhanced with air extraction vents on the hood, large, a gaping central air intake in the front bumper, and new air intakes above the fog lights. The intake above the driver's side fog light directs air up through the fender and into the airbox. This intake alone decreases engine air temperature by 18 degrees.

The Durango's already an aggressive looking SUV, and those cooling measures make it look even meaner. But Dodge's designers went a few steps further. The grille and 20-inch wheels are blacked out, as is the trim, and there are unique sill extensions for some attitude. Dodge added an extra air inlet in the bumper between the upper and lower grilles, as well as LED fog lights. In back, there's a unique bumper with free-hanging exhaust outlets.

The suspension has been beefed up over the standard Durango with stiffer bushings, (16 percent), higher spring rates (3 percent front, 16 percent in the rear), an 18-percent stiffer rear sway bar, and electronically adjustable dampers. The bigger engine actually helps the weight balance, bringing it closer to 50/50 at 48/52 percent.

A vehicle as fast as the Durango SRT that carries so much weight needs big brakes and Dodge provides them. It is outfitted with Brembo brakes that features slotted 15-inch diameter rotors and 6-piston calipers up front and 13.8-inch rotors and 4-piston calipers in the rear. Those big binders allow it to come to a halt in just 115 feet from 60 mph.

Dodge provides seven drive modes: Sport, Track, Snow, Tow, Eco, Valet, and Street. Sport and Track increase shift times and loosen the electronic stability control reins while Snow mode locks the all-wheel-drive system 50/50 and clamps down on the electronic stability control, essentially putting it into a "nanny mode." Throw it into Tow mode and that turns on the active noise cancellation to isolate any drone from the exhaust. Street mode is for everyday around-town driving. Worried about handing your Durango SRT to the valet? There's Valet mode that cuts power to that of a V-6 to kill any dreams of shenanigans.

Inside the Durango's SRT gets a hand-wrapped dashboard with stitched accents, a flat-bottom steering wheel, paddle shifters, a 180-mph speedometer, and a T-style shifter that replaces the rotary gear selector found in lesser trims. Suede-wrapped pillars and headliner are standard along with leather and suede seats. Laguna leather and real carbon fiber trim are optional.

In terms of functionality, there's seating for seven with two captain's chairs in the second-row that fold and tumble for access to the third-row.

Despite its strong performance credentials, safety is paramount in any family hauler. Dodge outfits the new Durango SRT with trailer-sway control, forward collision warning, adaptive cruise control, blind-spot monitoring with rear cross traffic alert, and all the airbags you could want.

Being shown in the metal for the first time at the 2017 Chicago Auto Show, the new 2018 Dodge Durango SRT is set to go into production this summer with volume hitting dealers in the fourth quarter of 2017. Stay tuned for pricing and fuel economy as we near the on-sale date.