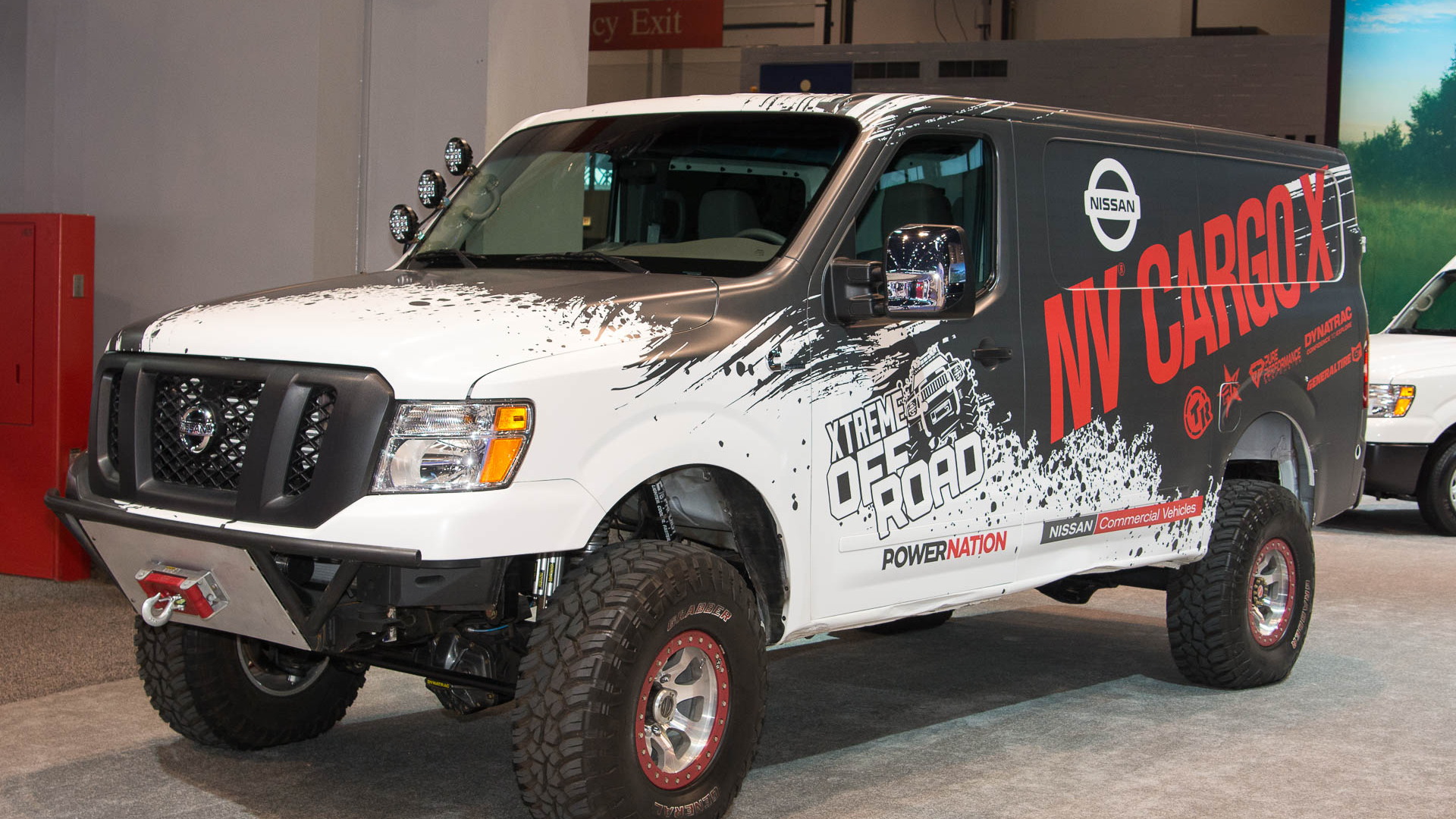 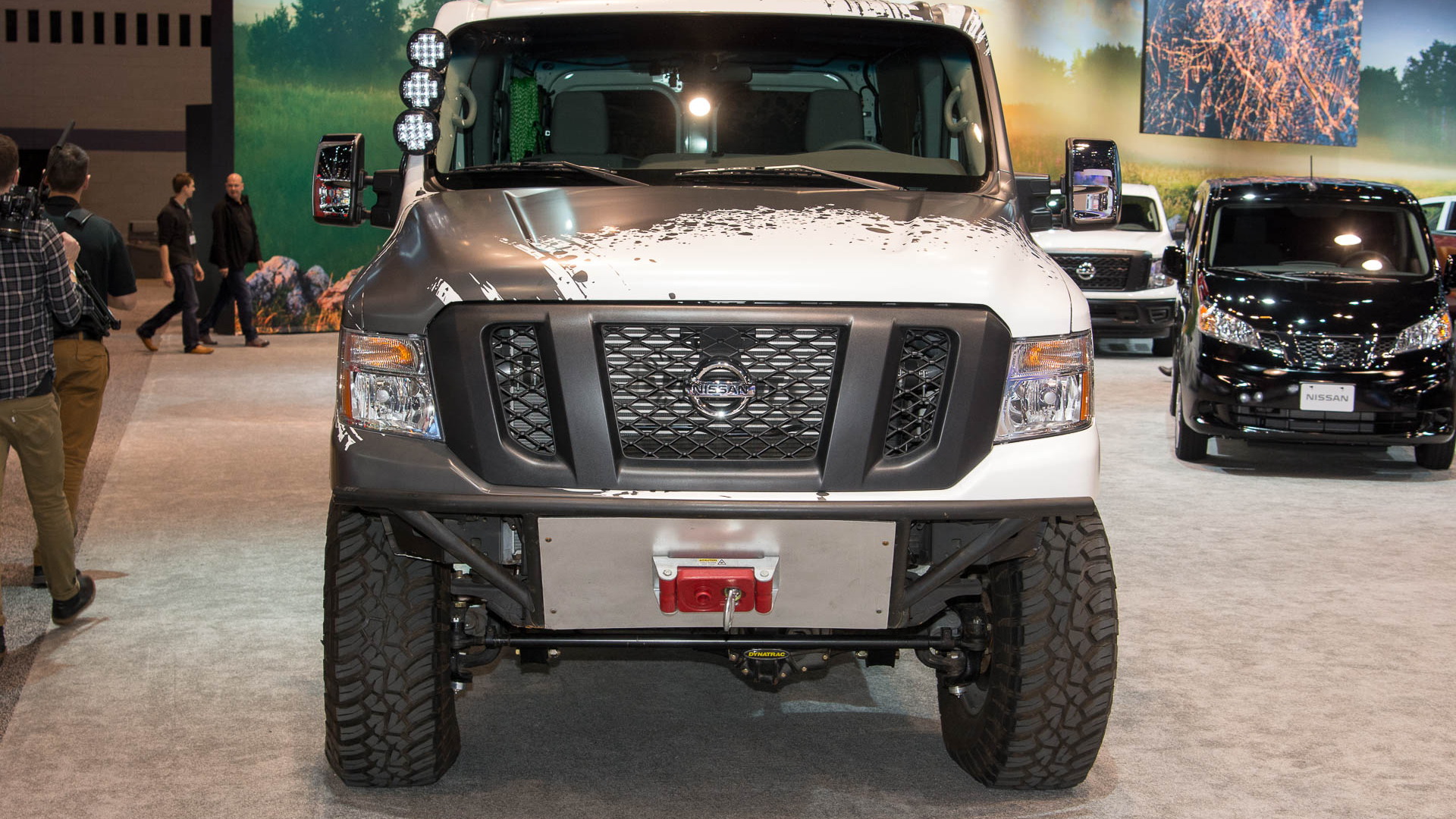 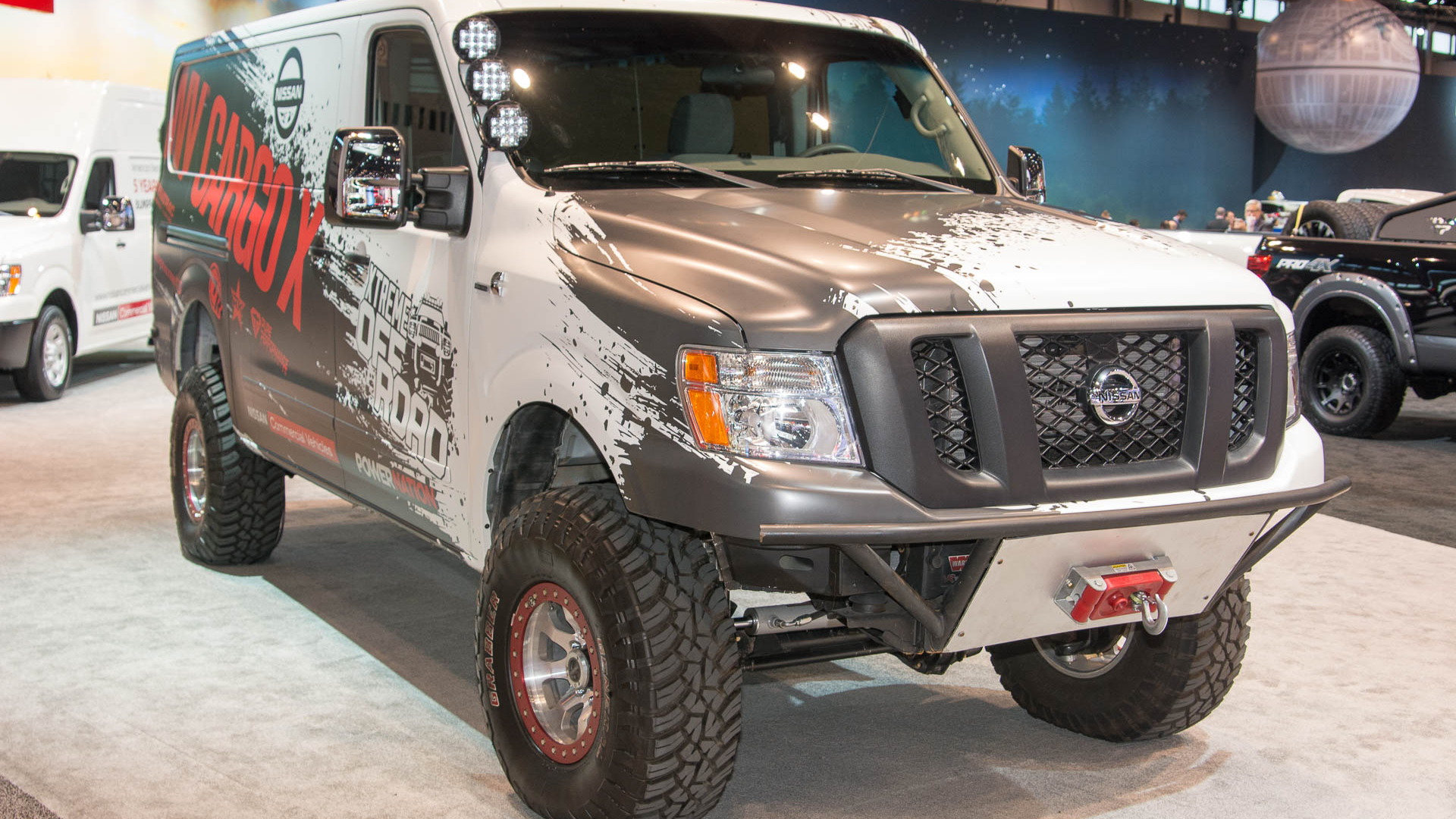 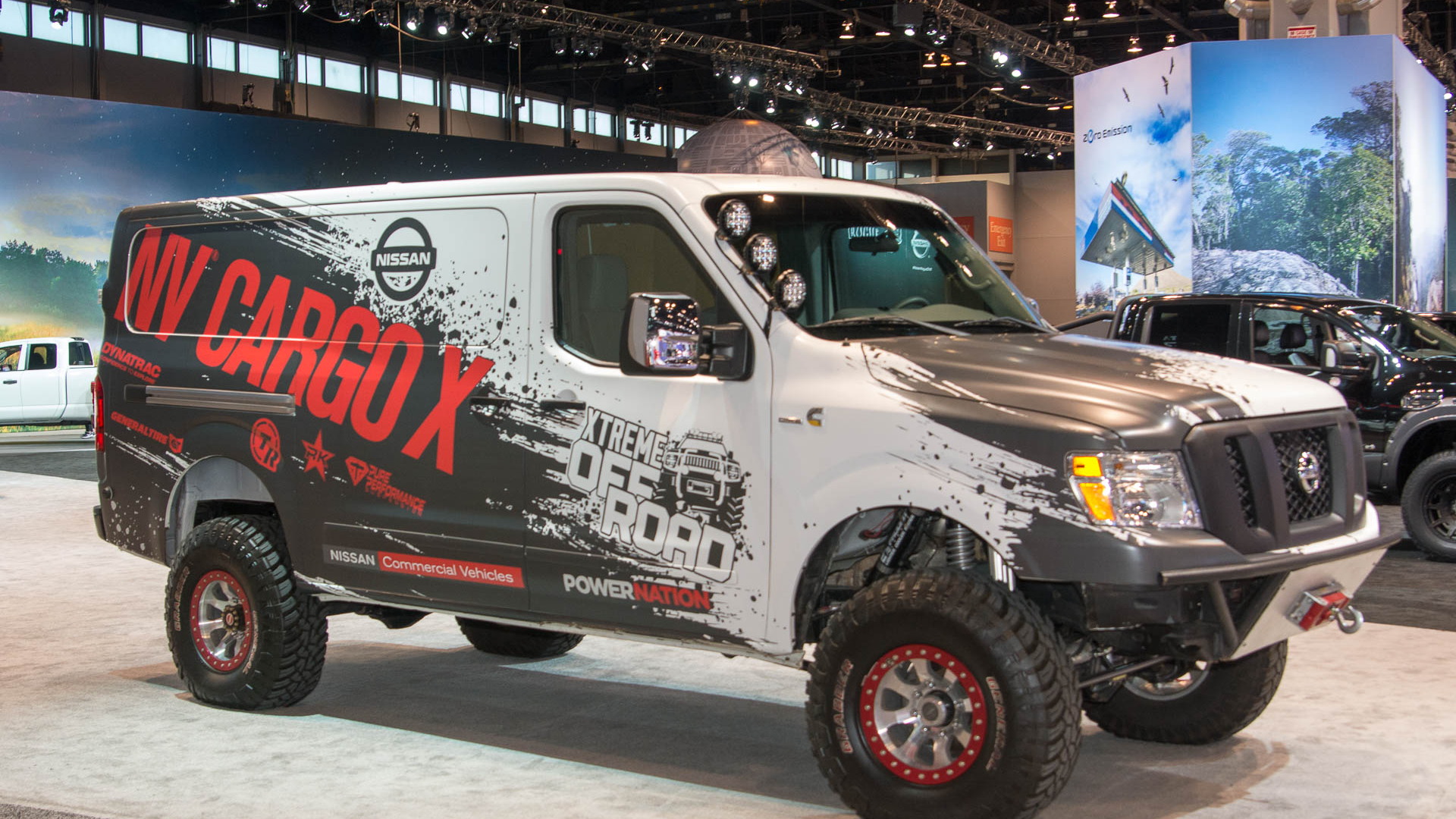 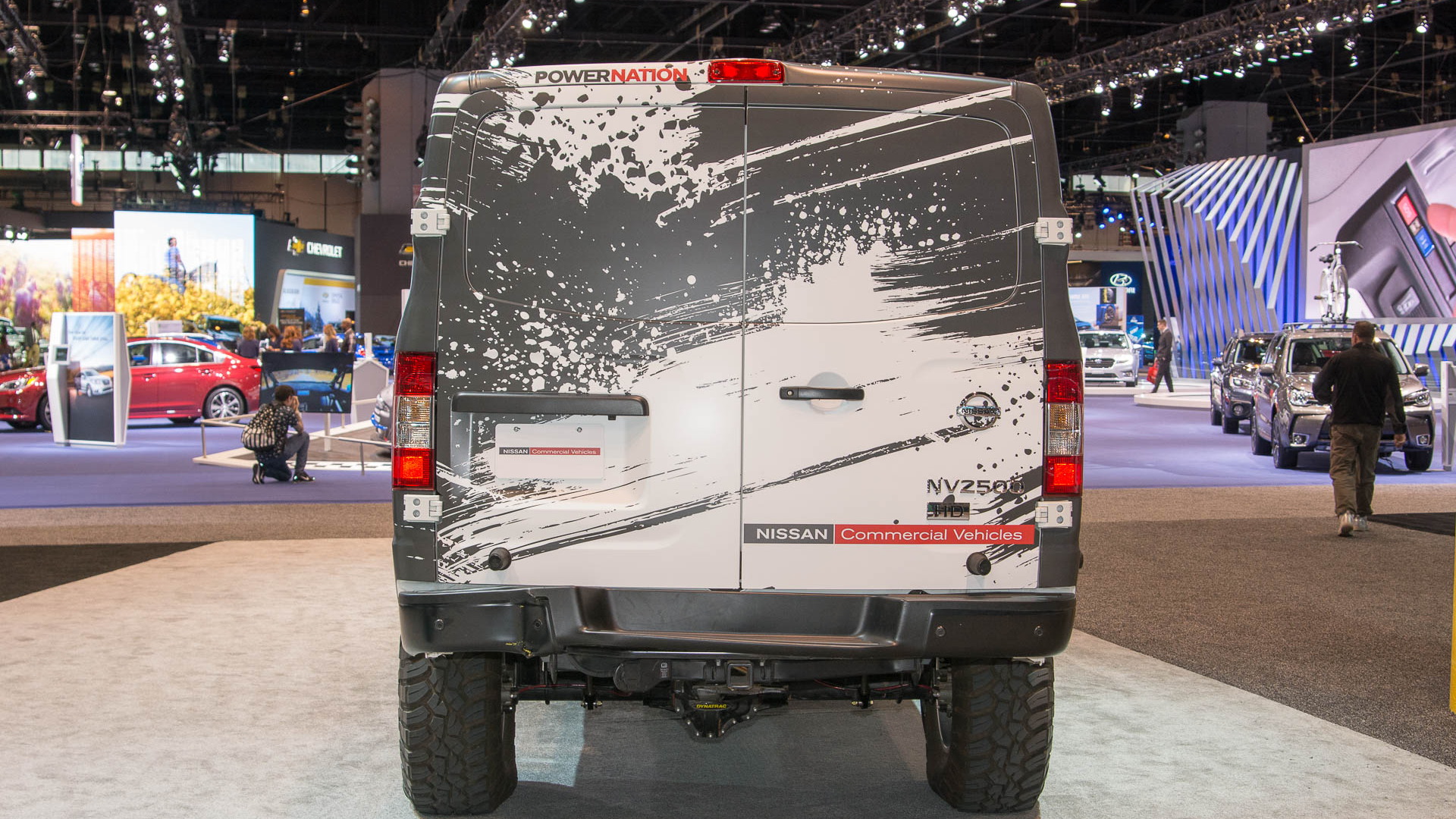 The Nissan NV cargo van isn't all that exciting. Sure, you can get a V-8 in it, but beyond that, there's little to get the blood pumping. However, Nissan just made an NV that's really cool.

How? Nissan teamed up with off-road builder and "Xtreme Off-Road" television show host Ian Johnson to jack it up with some beefy suspension, throw some mudders on it, and dump a Cummins turbodiesel V-8 under the hood.

The result is the Nissan NV Cargo X project, and this one-of-a-kind creation is debuting at the 2017 Chicago Auto Show.

Starting with an every day NV2500 HD cargo van, they swapped in a Cummins 5.0-liter turbodiesel V-8 engine straight out of the Titan XD pickup truck. It churns out 310 horsepower and 555 glorious pound-feet of torque. The Aisin 6-speed automatic transmission also came from the Titan XD, as did the four-wheel-drive system.

The stock front suspension was thrown out and a new custom off-road suspension went in its place, while the rear retained the standard leaf spring design. How much wheel travel you ask? We don't know. In fact, we don't know a lot about it as Nissan's mum on the details, but it does have enough suspension travel to clear a set of 37-inch General Grabber X3 tires. In fact, the van has a total of 22 inches of ground clearance.

A good off-road vehicle needs LED lighting to show you the way, and that's what the team installed, a custom setup to boot. They also mounted a 10,000-pound winch up front, along with a tube bumper and a custom skid plate.

Inside, the crew took advantage of the 234 cubic feet of space with everything you'd want in an off-road support vehicle. The added an onboard air system, a fluid containment and storage system, a full-size spare, a recovery rope, recovery tracks, a high-lift jack, a portable welder, and a tool bag.

Now for the disappointing part: This is a one-off build. You can't buy it, Nissan probably won't make one in the future, and it's merely a tease to show how awesome the NV cargo van can be.

That said, clearly with some hard word, a bucket of money, and the skills and time, you could make one of these yourself.

For more news from the Chicago Auto Show, see our dedicated hub.