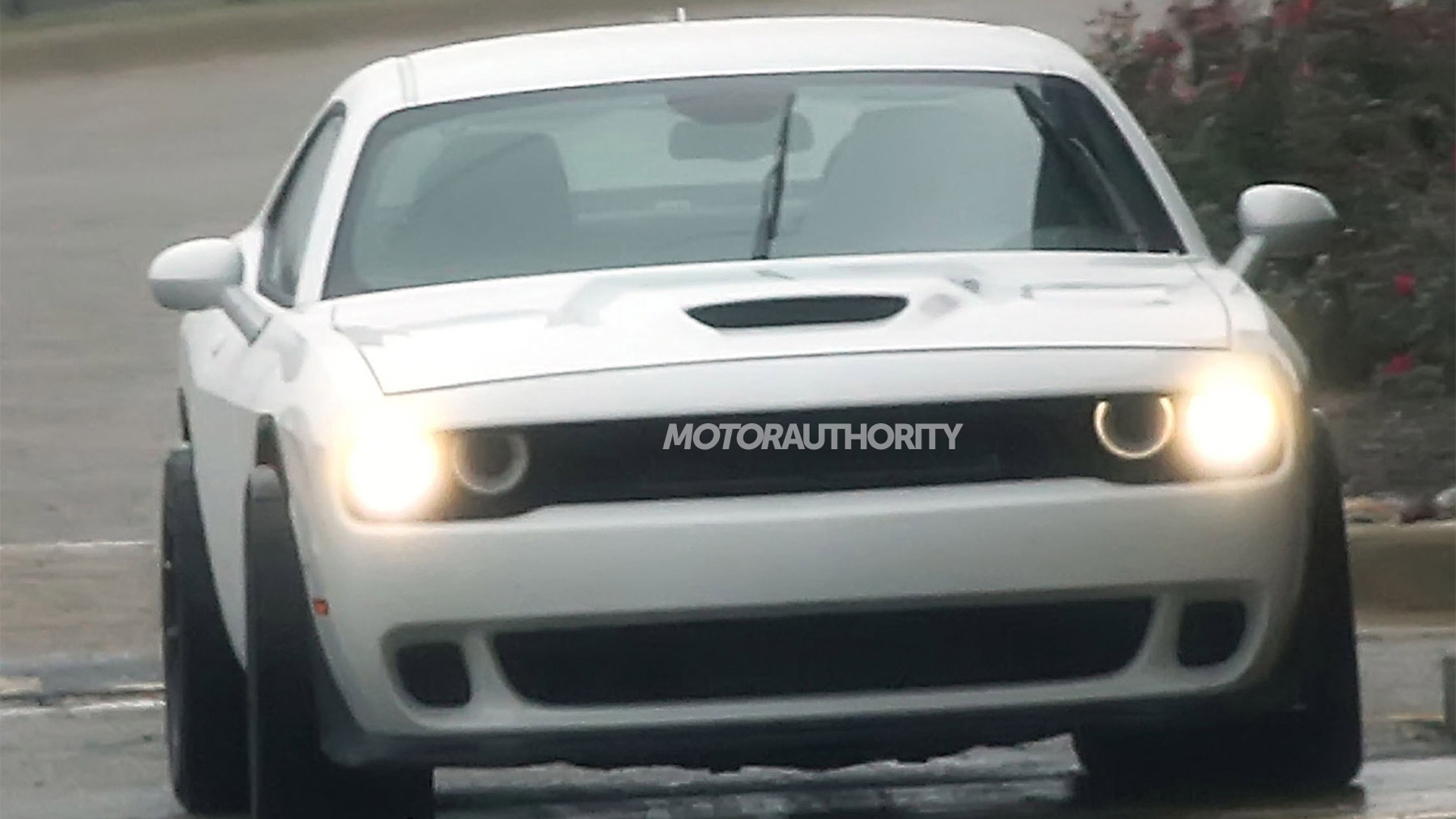 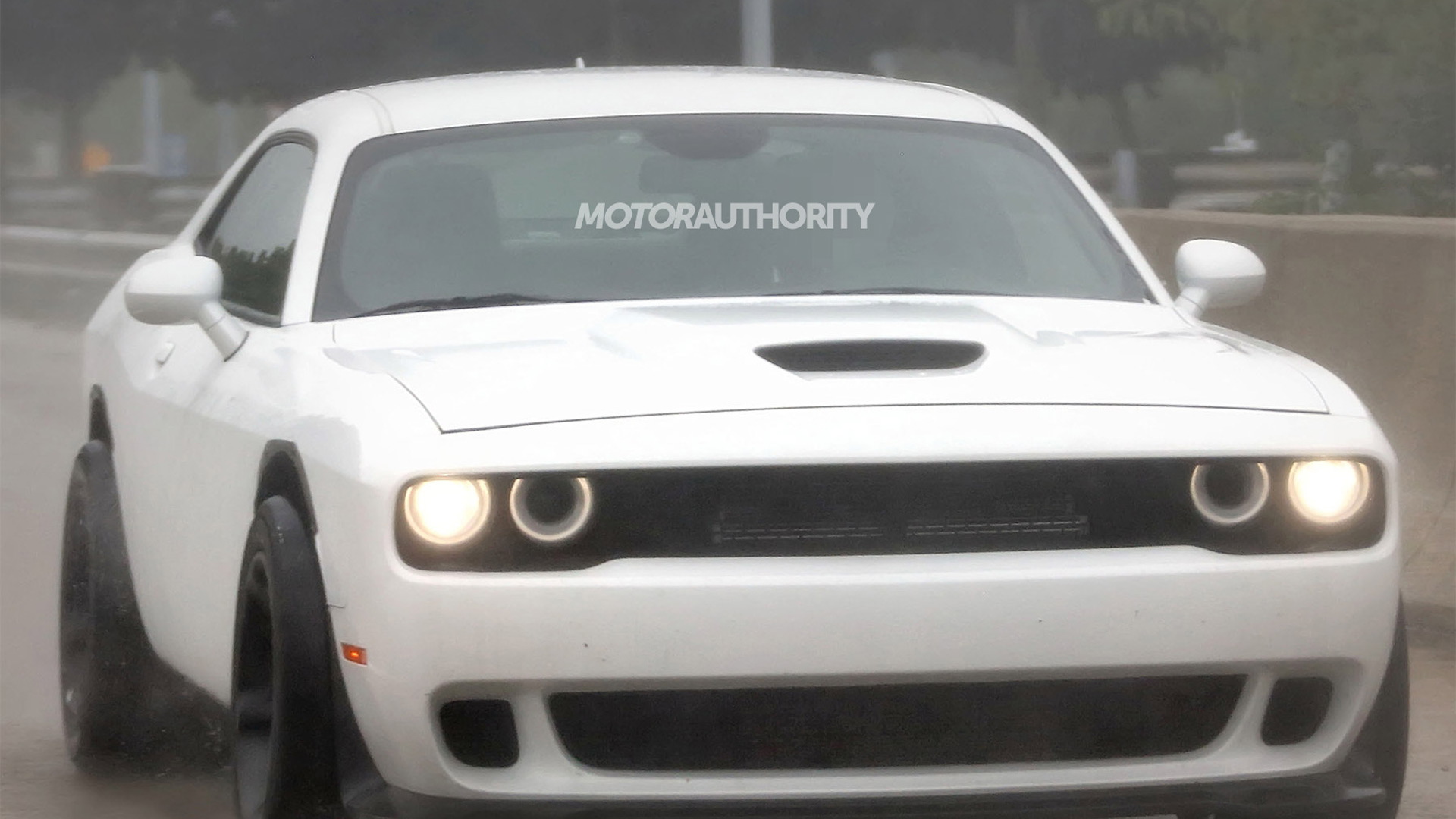 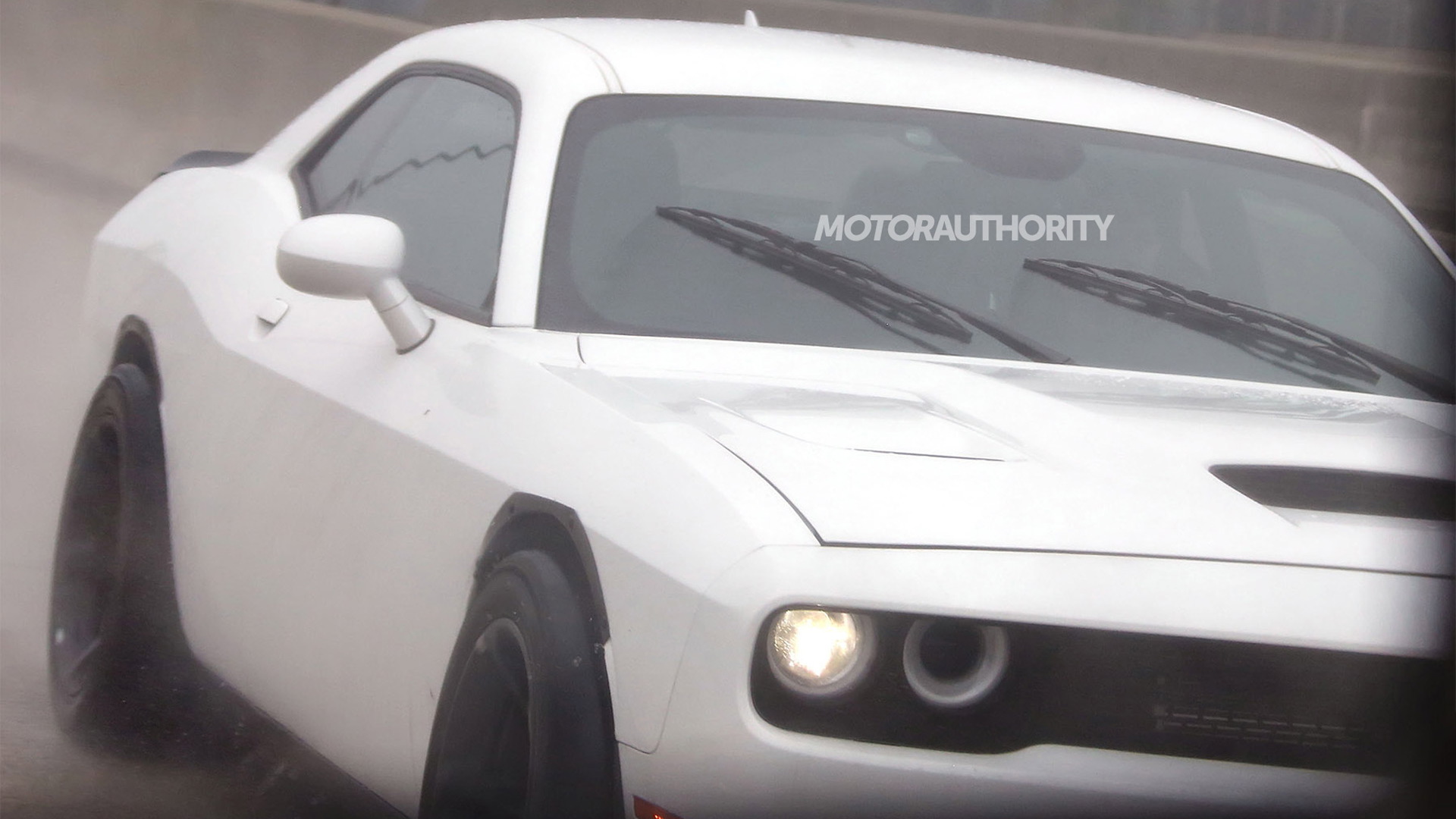 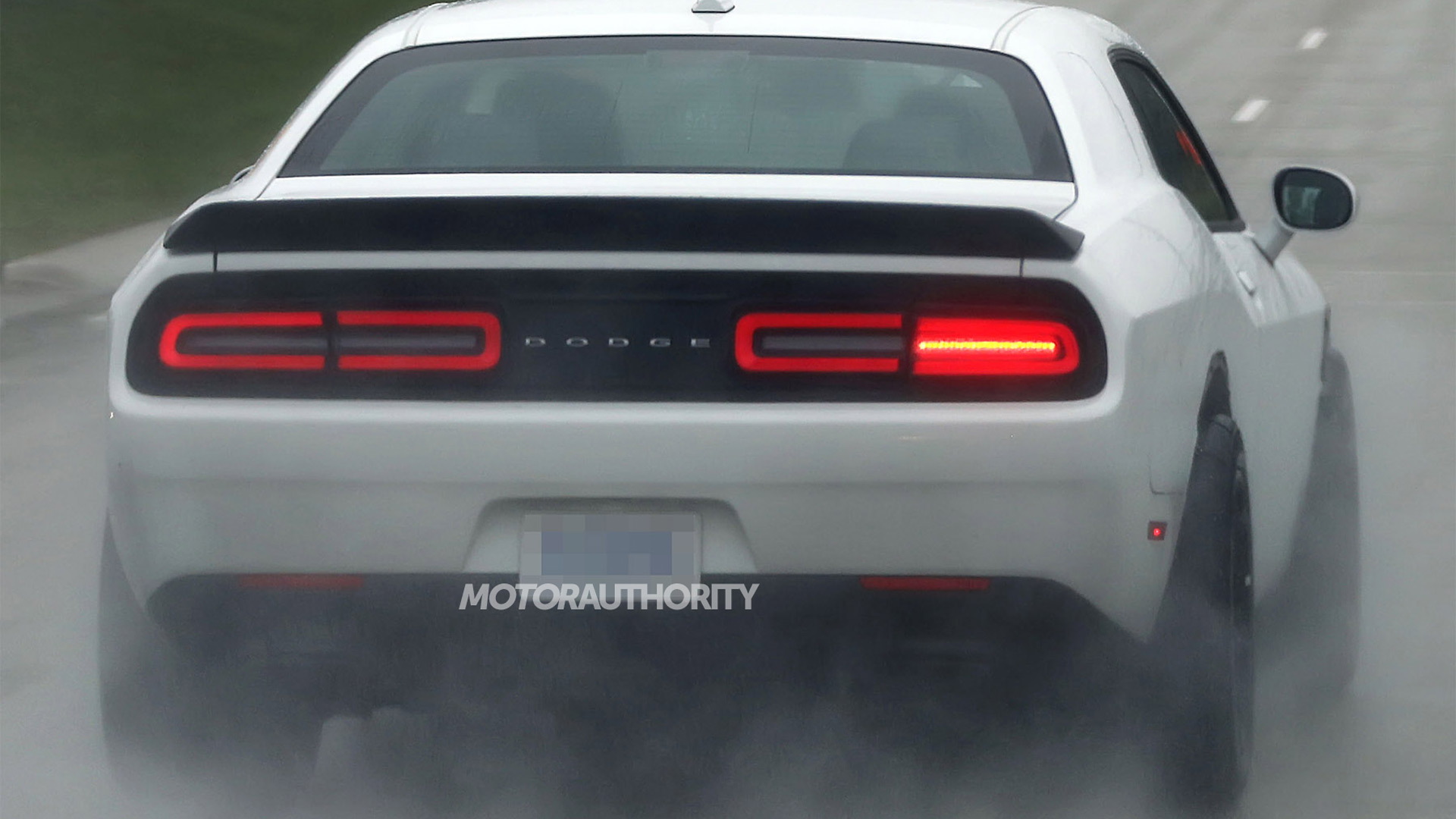 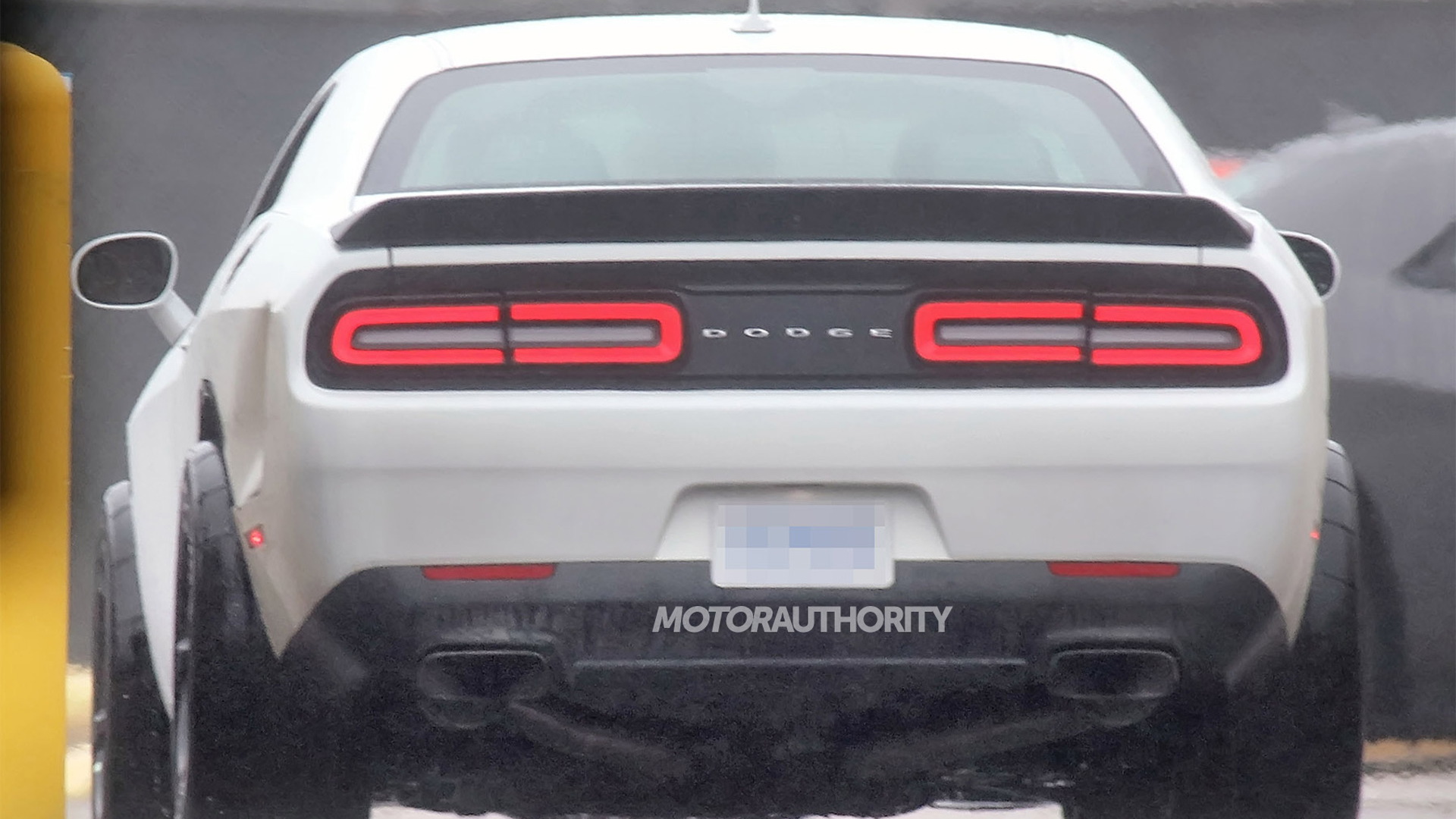 Prototypes for a new range-topping Challenger, one positioned above the SRT Hellcat, have been spotted testing on Michigan roads ahead of a likely market launch in 2017. This would make it a 2018 model.

The prototypes are wearing standard body panels but the protruding rubber is unmistakable. This is going to be one wide, sexy beast.

Our photographer couldn’t zoom in due to the poor weather but it’s clear the tires are much wider than the minuscule 275/40-size set fitted to the SRT Hellcat. We’ve previously heard that 315s were possible though this figure could be conservative judging by the spy shots. (The car with the biggest rubber in the business is currently the Dodge Viper, which wears massive 355/30-size tires at the rear.)

Dodge first hinted at a wide-body Challenger when it rolled out the Challenger GT AWD concept at the 2015 SEMA show. The concept featured the all-wheel-drive system from the Dodge Charger but under its hood was the lame duck 5.7-liter V-8 from Fiat Chrysler Automobiles’ [NYSE:FCAU] arsenal.

Fortunately, the prototypes are thought to differ from the concept. We hear there will be at least two wide-body options for the Challenger, though there could certainly be more. The two we’re hearing about is an all-wheel-drive car equipped with the entry-level 3.6-liter V-6, plus a high-performance car equipped with the Hellcat supercharged 6.2-liter V-8 and rear-wheel drive only.

The all-wheel-drive car is aimed at those in the Snowbelt. V-8s are thought to have been ruled out due to tight and packaging and torque constraints of the all-wheel-drive system, though at least with the extra traction the car will be hand all year 'round.

As for the high-performance car, this is expected to be a new model called the Challenger ADR (American Drag Racer). It will be rear-wheel drive, with the extra rubber there to help put down the Hellcat’s hellish power. We’ve even heard that output could be bumped beyond the current 707-horsepower maximum rating.

The Challenger ADR is expected to be a final hurrah for the current Challenger before the redesigned model, based on the lighter, more dynamic Giorgio platform debuting in the Alfa Romeo Giulia, makes its arrival. The next-generation car may even have a convertible option using the Barracuda name.