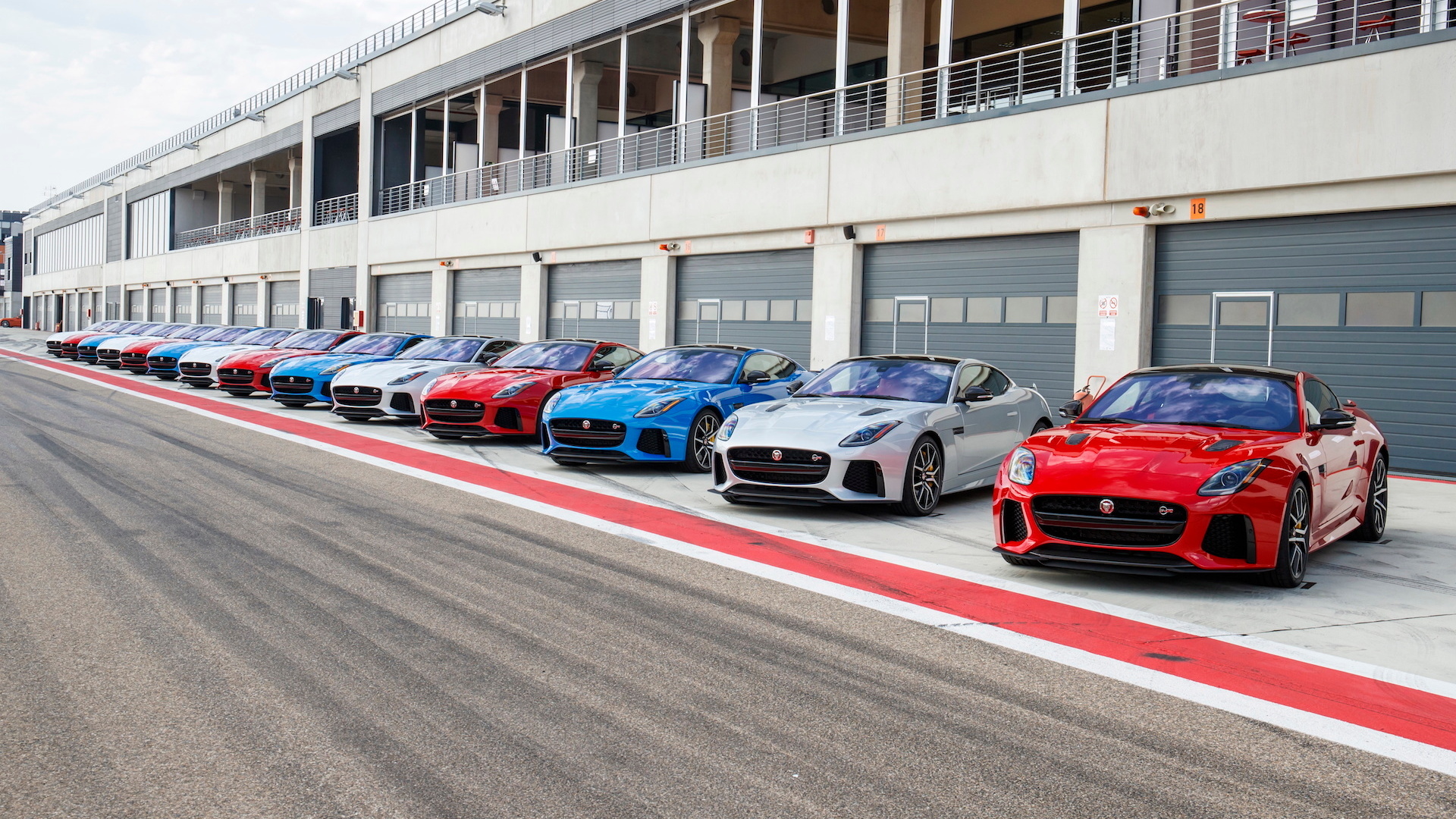 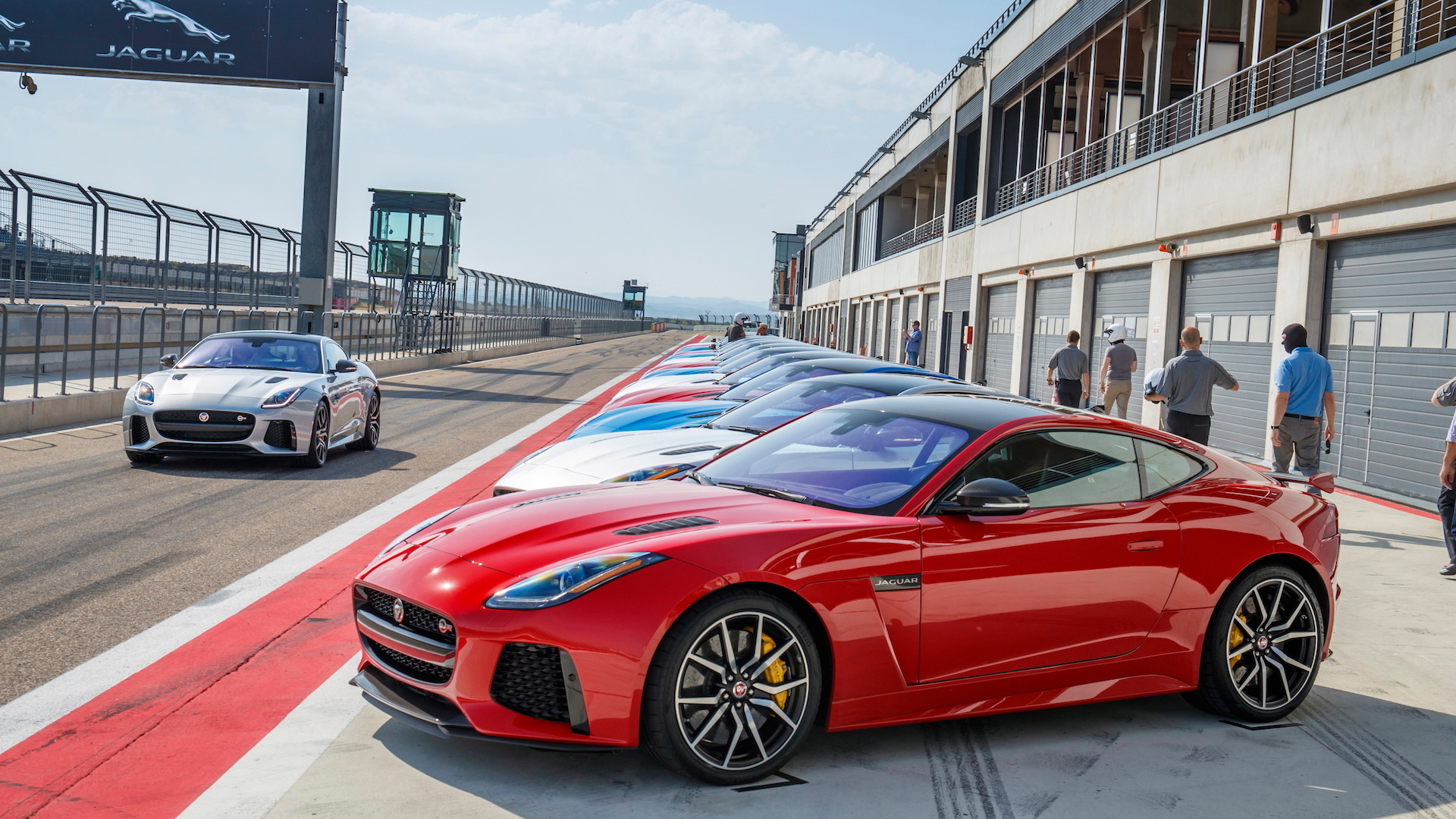 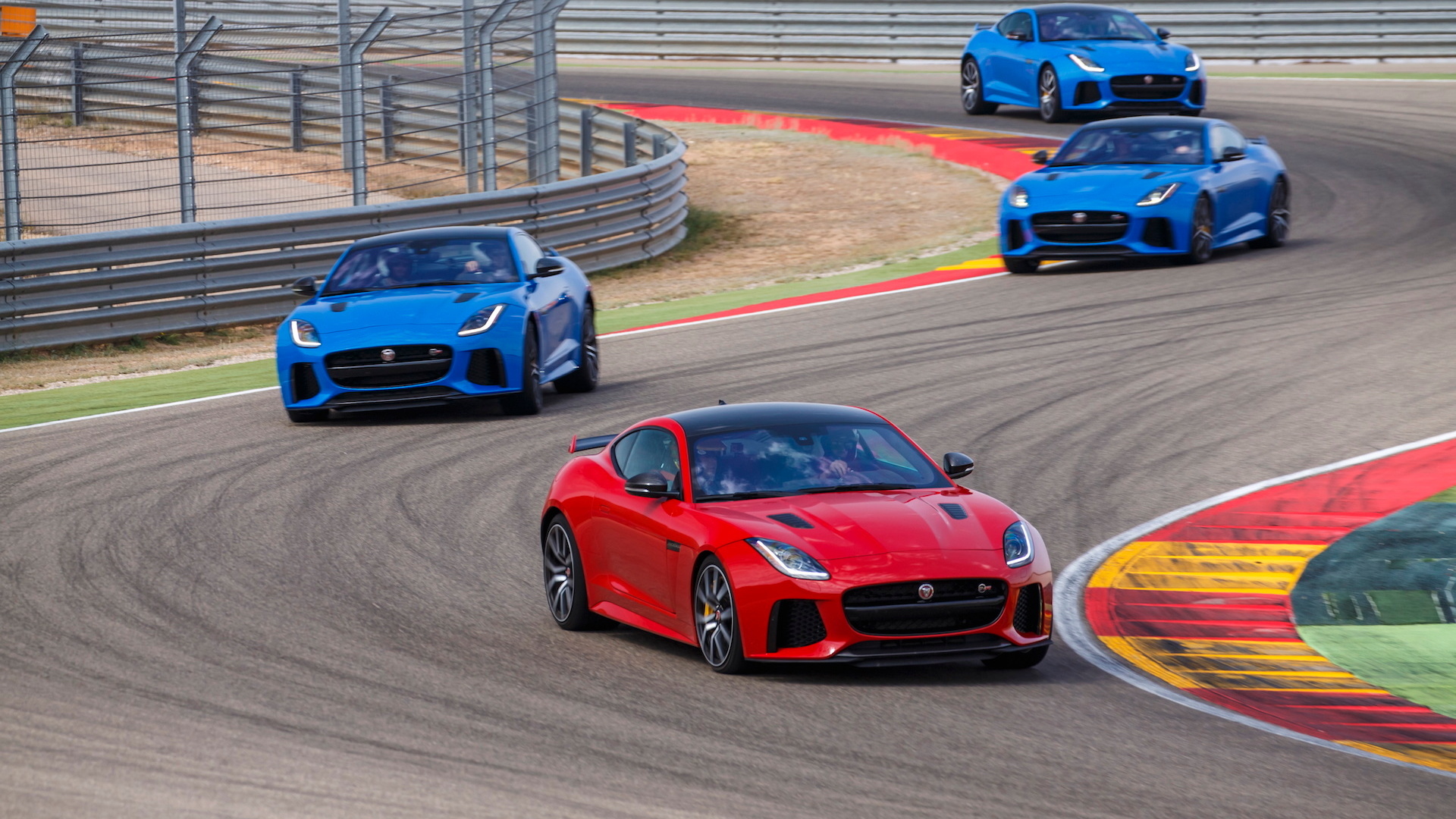 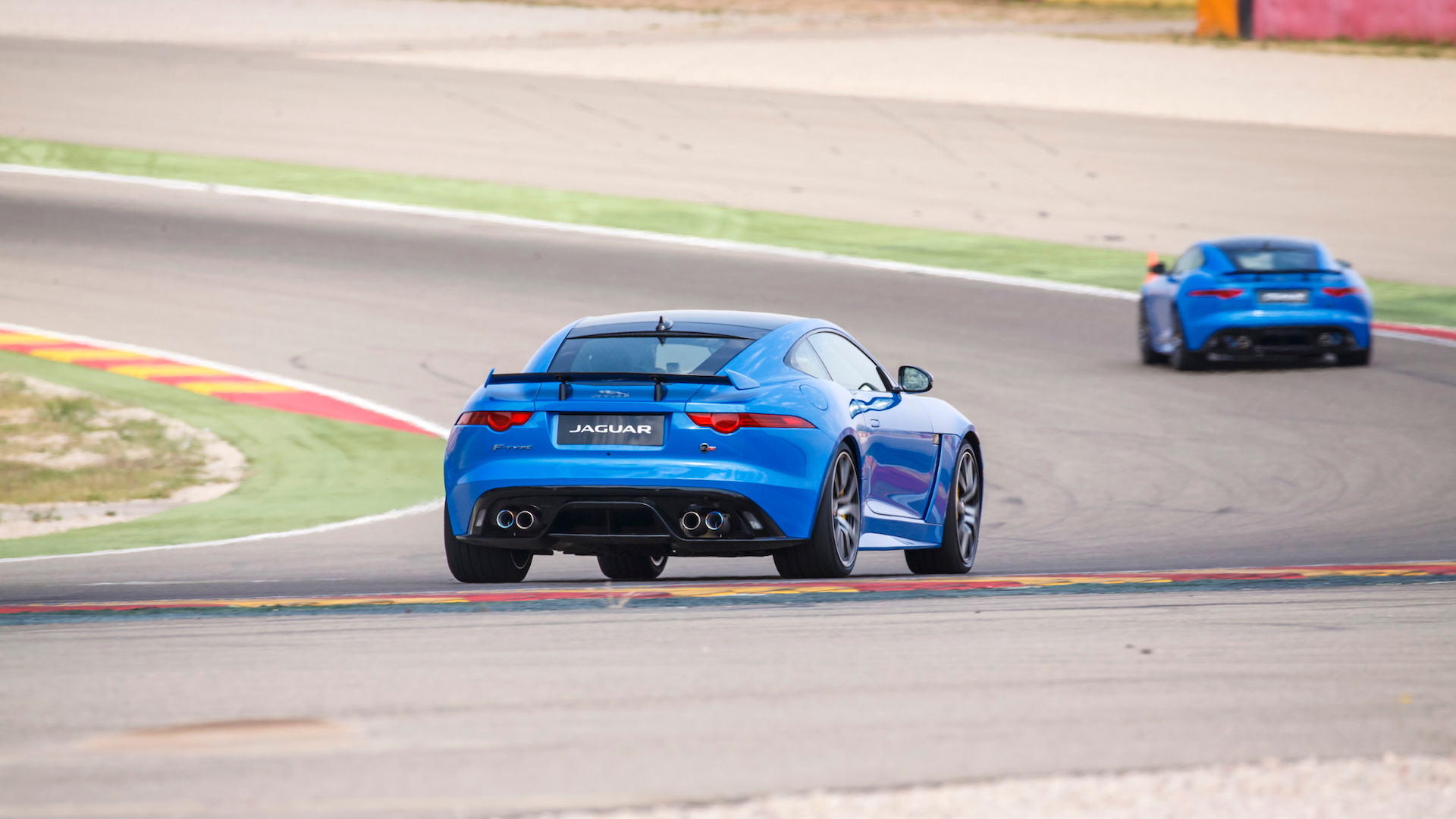 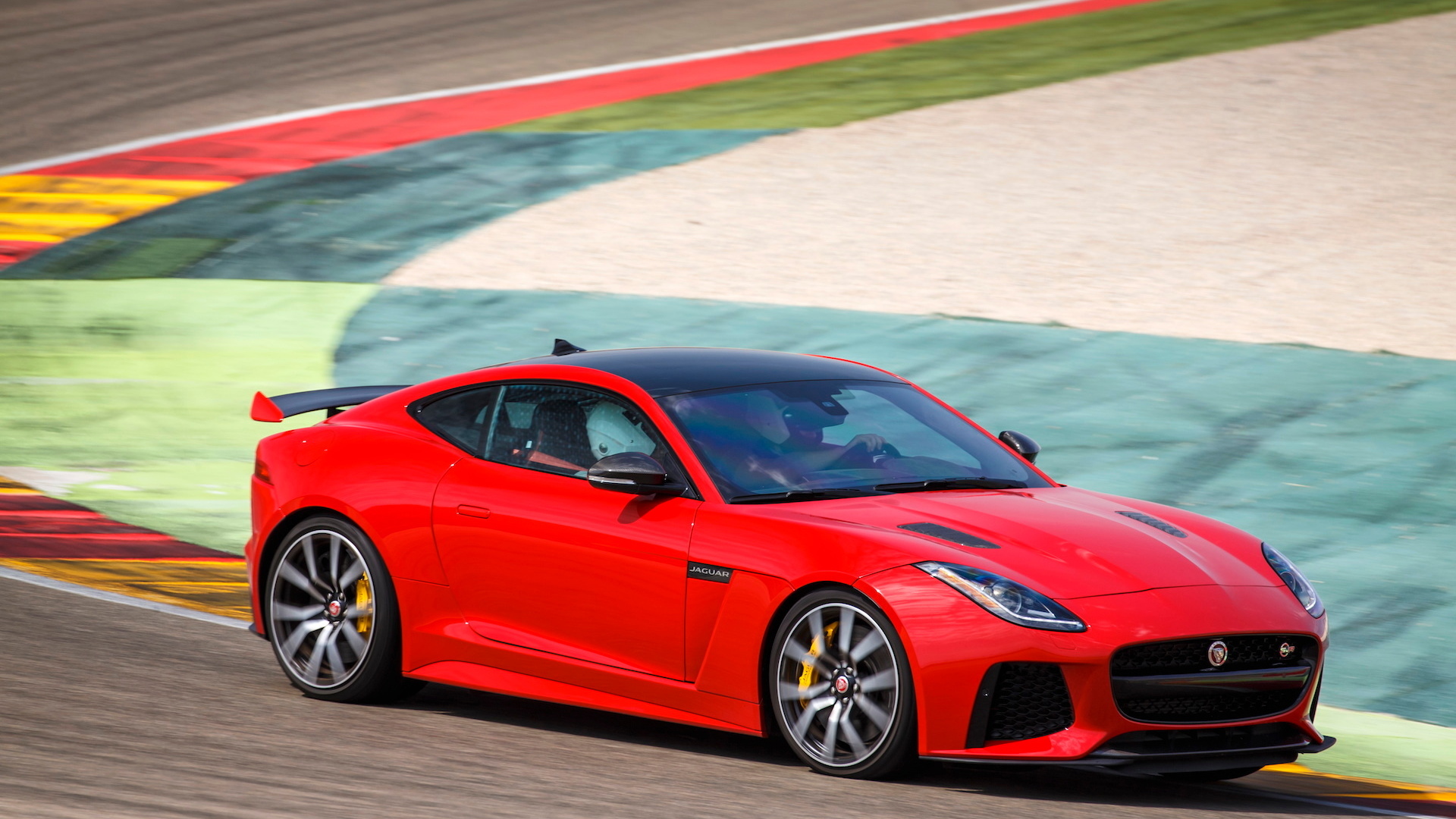 Maybe this is how we'll remember sports cars. Once everything runs off a silent pack of cells charged wirelessly overnight. Once no one actually owns a car outright. Once cars turn into self-driven transportation devices, run by apps, pre-programmed for convenience, drained of life.

Savor this one. The 2017 Jaguar F-Type SVR is a crackling piece of ecstatic, retro performance art. That's not just a Jaguar 5.0-liter V-8, it's the loudest Jaguar V-8 ever. It's not just fast, it's the fastest Jaguar ever, save for the uber-rare XJ220 supercar.

It isn't merely the best-looking Jaguar on the road today, it's also the most sinister one, with a squarer jaw, fatter fenders, and Robocop-inspired bits of carbon-fiber armor.

It's probably a step beyond the F-Type that any of us could live with every day. That doesn't intrude on what it is—a fearless middle finger at the future of cars, with a leering eye at their past.

The F-Type has hacked its way through the sports car jungle since it was new in 2014. It's taken a couple of years for Jaguar to flesh out the lineup. In three model years, the convertible has been joined by a coupe, then an awesome F-Type Coupe R edition, then manual-shift and all-wheel-drive editions.

Now Jaguar Land Rover’s Special Vehicle Operations gets a crack at it, and in the process, neatly sums up what the F-Type is all about with the SVR.

It's the first of the brand's aluminum-hulled sports cars to hit a claimed 200 mph. I didn't quite reach that epic milestone, but at Spain's Motorland Aragon circuit, with a pro co-pilot and two passes, I saw 175 mph indicated, and it wasn't even the trickiest part of the day.

Motorland's an unforgiving place. Sharp off-camber bends whip into steep descents, the bus stop recreates the feeling of being run over by an actual bus. Oh, and then, the longest, most tempting reaches dump you right into a second-gear hairpin.

The SVR nailed those passages down as flat as it possibly could, with a wicked rasp and haymakers of oversteer.

SVO starts with the Coupe R configuration, then tweaks everything to push the F-Type SVR to a frontier shared with the Mercedes-Benz AMG GT and Porsche 911 Turbo. The Jaguar dumps in more power, all-wheel drive, enhanced aero bits, dynamic upgrades, and some subtle cues to give fair warning—the SVR recipe from here forward.

MORE: 8 things that make a Jaguar F-Type an SVR

For power, the F-Type SVR taps Jaguar’s supercharged 5.0-liter V-8 for higher output rated at 575 horsepower and 516 pound-feet of torque. The 8-speed automatic gets even faster shift speeds (no, the SVR doesn't have a manual), and the all-wheel-drive system has more radical settings for shifting power from the rear to the front, and for coordinating power between the rear wheels.

Jaguar says the SVR coupe rockets to 60 mph in just 3.5 seconds, with convertibles taking a couple of ticks longer. Top speed is 200 mph for the coupe and 195 mph for the roadster.

Along with the power boost, the SVR has its own programming for shift points, steering, stability control, and suspension damping. Its pushiest driving mode dramatically lifts the yaw limits for the all-wheel-drive and stability control systems, which can be turned off completely.

Hardware upgrades include a front roll bar that's 5 percent softer; the rear bar's mildly stiffer too. The 20-inch wheels trim some weight and hide some stiffer knuckles at the rear. A new titanium-alloy exhaust system cuts weight and puts the SVR on a two-pack-a-day voice lessons.

Aero gets its own massage, with big front air intakes and a rear venturi, underbody trays, and an active rear spoiler that cuts lift when it rises to go to work (at 60 mph for the convertible, 70 mph for the coupe, all the time when Dynamic mode's selected).

Weight is down 55 pounds in base-price trim, but add the $12,000 carbon-ceramic brakes and swap in pricey carbon-fiber pieces for the roof and chin spoiler and the SVR is down about 110 pounds.

Those treads are in charge of knowing when the SVR needs to let all holy hell break loose—which it does often, and easily, when provoked.

Outside of Barcelona, Spain opens up into a lacy network of roads, most of them built after union with Europe. Handsomely paved superhighways, pristine secondary roads—it's what California could have been with better upkeep.

The F-Type likes a careful set of hands on the controls, even here.

The toggle on the console suggests what's about to happen in iconic forms. There's a very special snowflake for that kind of weather.

At the opposite end of the toggle, there's a checkered flag for other special moments when you'll want to twiddle with its adaptive dampers, shift timing, throttle progression, and steering feel.

Let it alone when trundling through charming and eerily quiet towns. Without touching a thing, the SVR's snaps, crackles, and pops of overrun draw stares. Some approving, some not.

The SVR's more supple than expected, even on roads that are wrapping around stone houses, winding up through canyon passes that could double for Ortega Highway. Jaguar's preserved the ability of its adaptive dampers to adapt to street driving, more than can be said for a GT350. The carbon-ceramic brakes don't grab or squeak, but they don't have much travel or nuance, either.

The steering forces attention. It darts and sniffs out corners while the suspension takes more of a wait-and-see attitude. A Coupe R is no luxury liner, but by contrast, it's a better at mundane stuff like trolling through traffic.

Roll up into Motorland's paddock, then roll out of the pits, and the SVR begs you to let that checkered-flag switch drop.

Egos flicker to life, and head socks turn us all into an militia of petty thieves as we helmet up for a run at 200 mph.

Phones go into silent mode and so do drivers. The SVR's body is riveted and glued, which is the same way to describe the attention Motorland begs to be paid. Apexes spring up like unwhacked moles, braking points shake you by the collar. It's one manic Mobius strip.

Instructors prep us on the way to the cars, but the entire focus—to the point of shutting them out—is listening to what the car's suspension, steering, brakes and tires, and right pedal are saying.

The SVR spits and snarls its way to life on the most brilliant ribbon of pavement of the day, from the first roll-out into a hot corner. Flicked into Dynamic mode and stability set to adult-level permissions, the SVR is ready to party.

Wheelspin is one backing track, but the big shivers come from the SVR's custom exhaust. It cuts loose insane levels of overrun, a string of exhaust expletives whenever you back off the throttle.

Goose it, and the SVR is happy to cut corners to the bone, dump its contact patch with the earth, and let loose a slide worthy of a rear-driver, if only for a moment. Its all-wheel-drive system is playful but not evil: it pulls everything back in line in concert with the P Zeros so long as they're able to keep a grip.

Still, those high-speed moments of oversteer come on fast and heavy through a corkscrew more dastardly than the one at Laguna Seca. The SVR can move power around front to back, and side to side in back, but it can't brew miracles. It's taught to exaggerate almost every driving gesture, so careful modulation of the throttle and the steering wheel gets drilled into you to shake off sloppy corner work.

At first we're routed through a moose-test of a chicane, with a tease of Motorland's longest straight at its end. Two laps later, that bus stop is de-kinked, and the track opens for top-speed flirting.

Drop out of a downhill bend, then pinball out of a left-hander, and it's pure temptation. Pin the throttle, and the SVR soars faster, and higher, than ever in an F-Type. For a moment, 175 mph shows up on the clock.

What seems like hours later—or just a half-second—it's full-stomp braking. Stand on the low-travel, high-resistance pedal, let the carbon-ceramics file off speed, and the SVR judders lightly as you paddle down into second for a late, late hairpin.

Do the run twice and it gets easier, but never normal. It's like base-jumping between Petronas towers. Whomever designed this track was sleeping with the devil.

Not one to linger

There's no pricetag attached to the most striking SVR feature: the warped sensation that the world is compressing itself to fit in the SVR's windshield at an epic pace. That sensation lingers long after you back off and go home.

MotorAuthority accepted travel expenses from the manufacturer to bring you this first drive. We also bought ourselves a nice bottle of Rioja and also some patatas bravas, mostly to maintain an air of propriety.