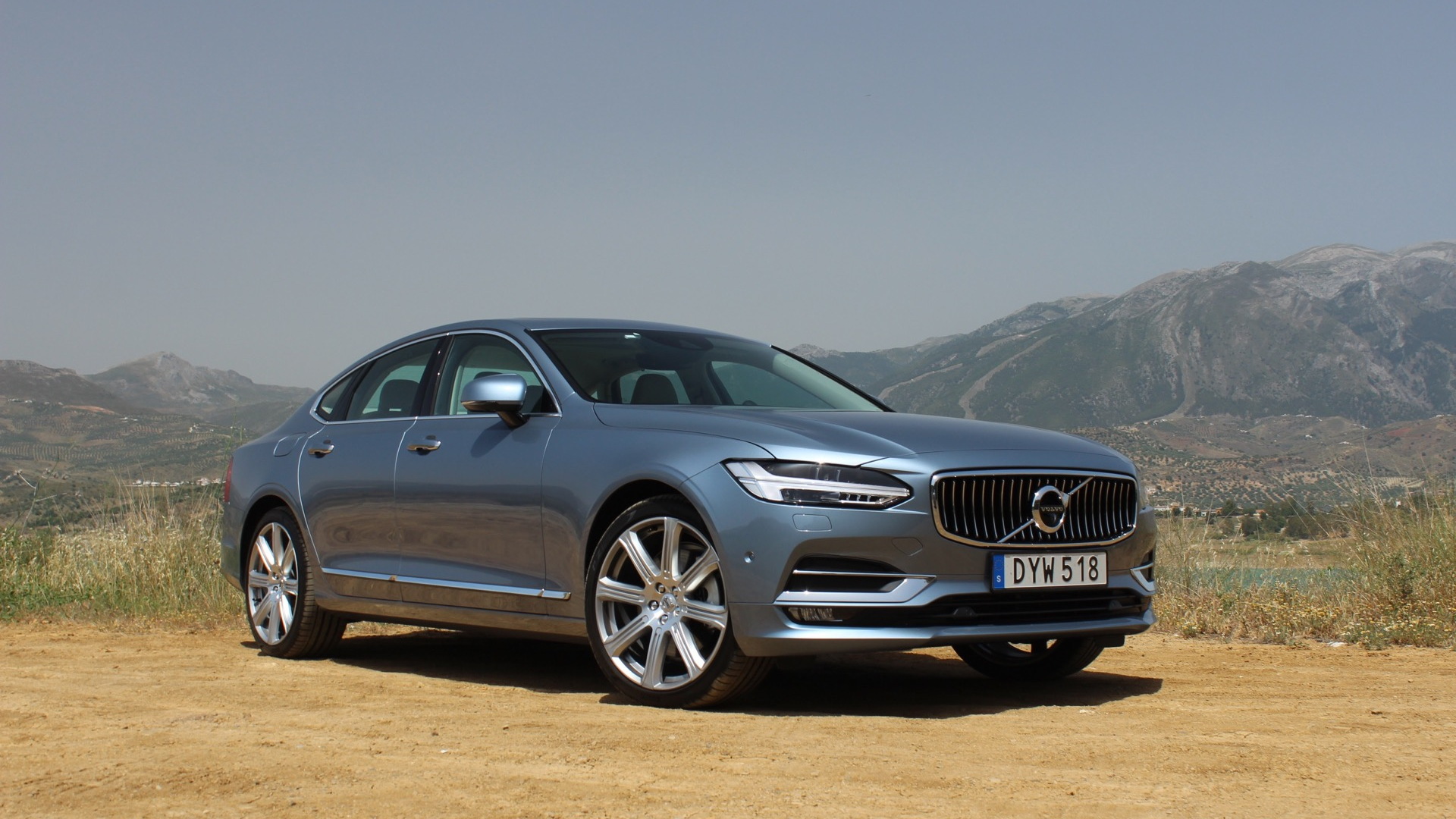 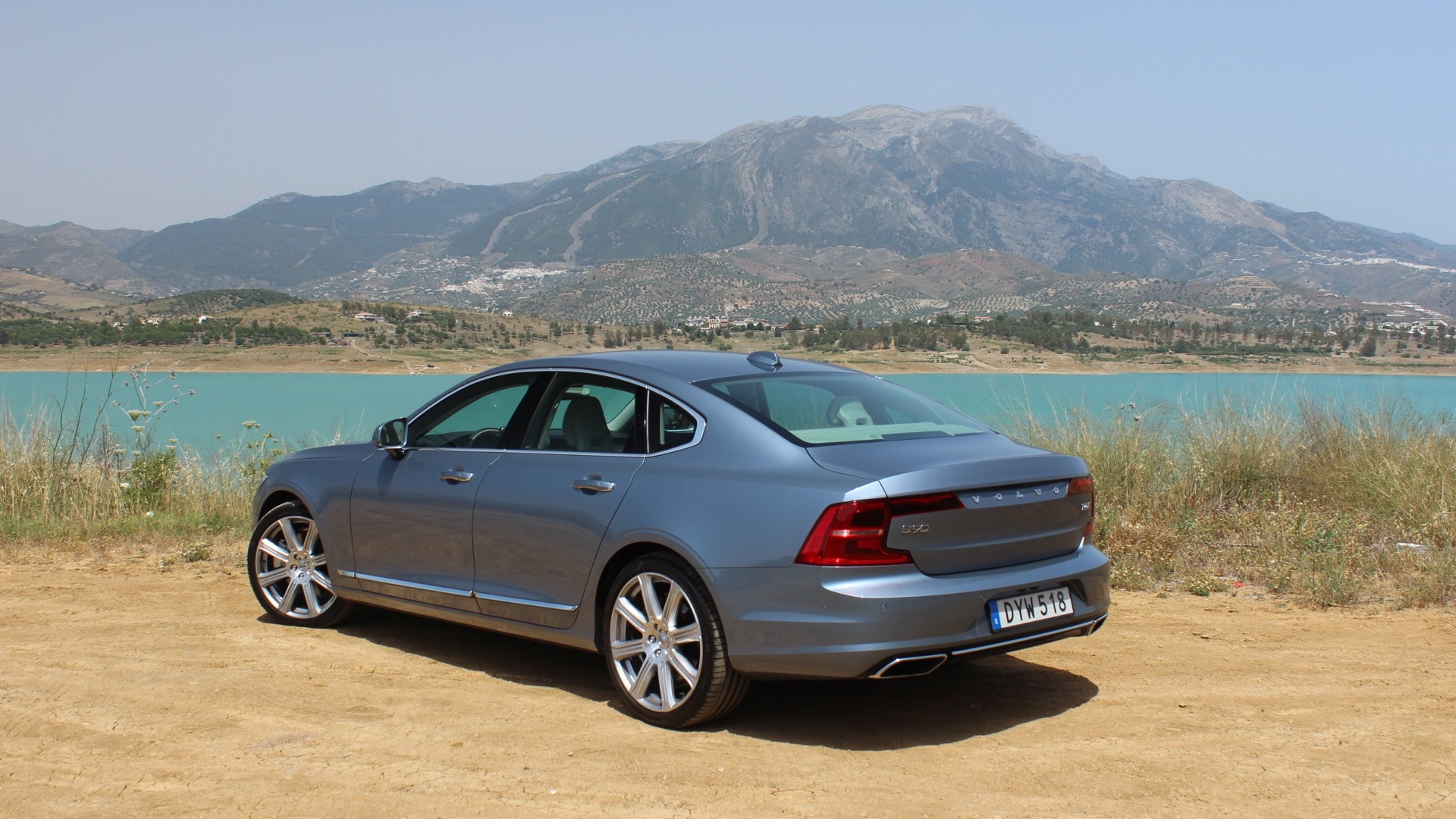 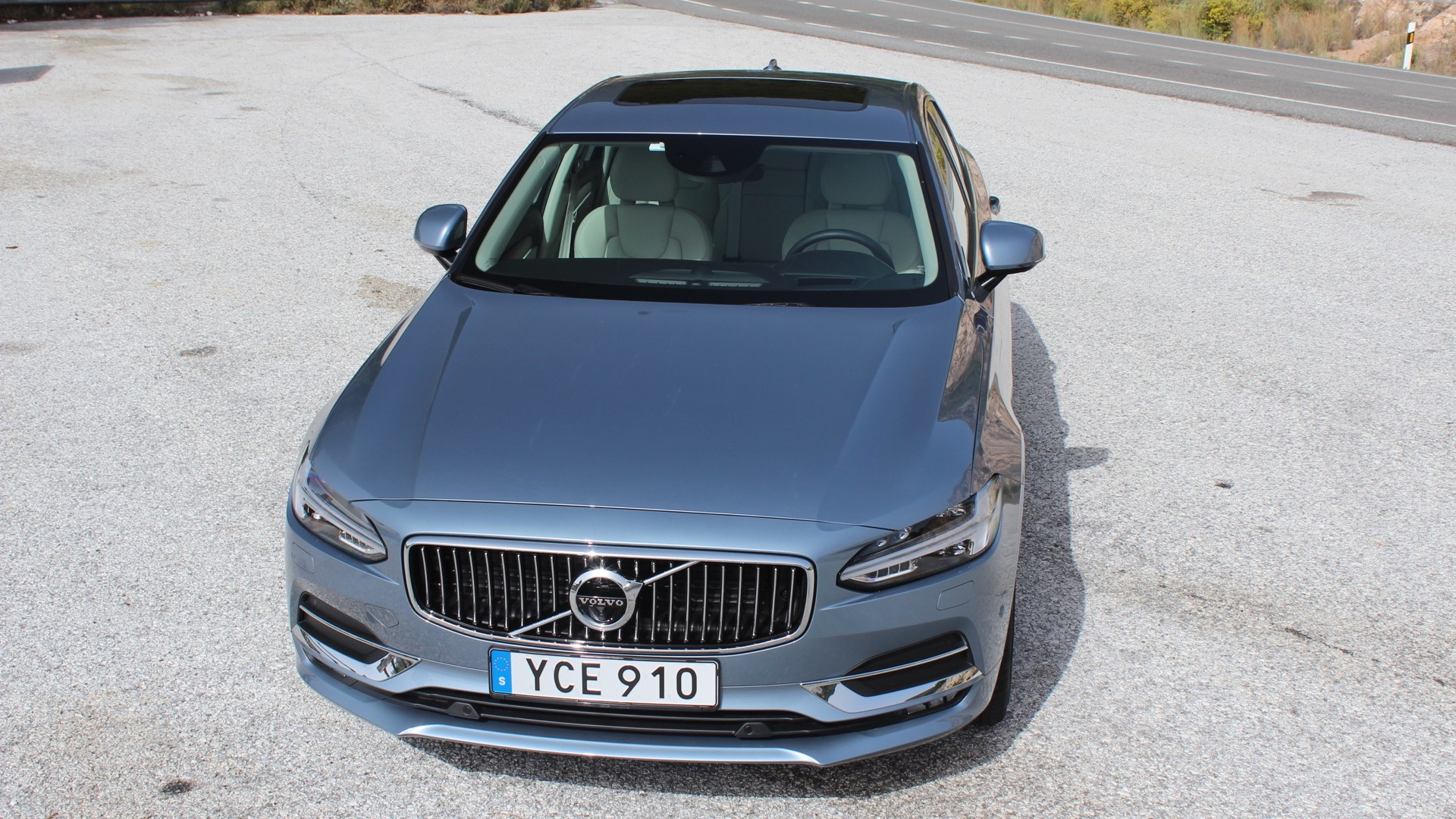 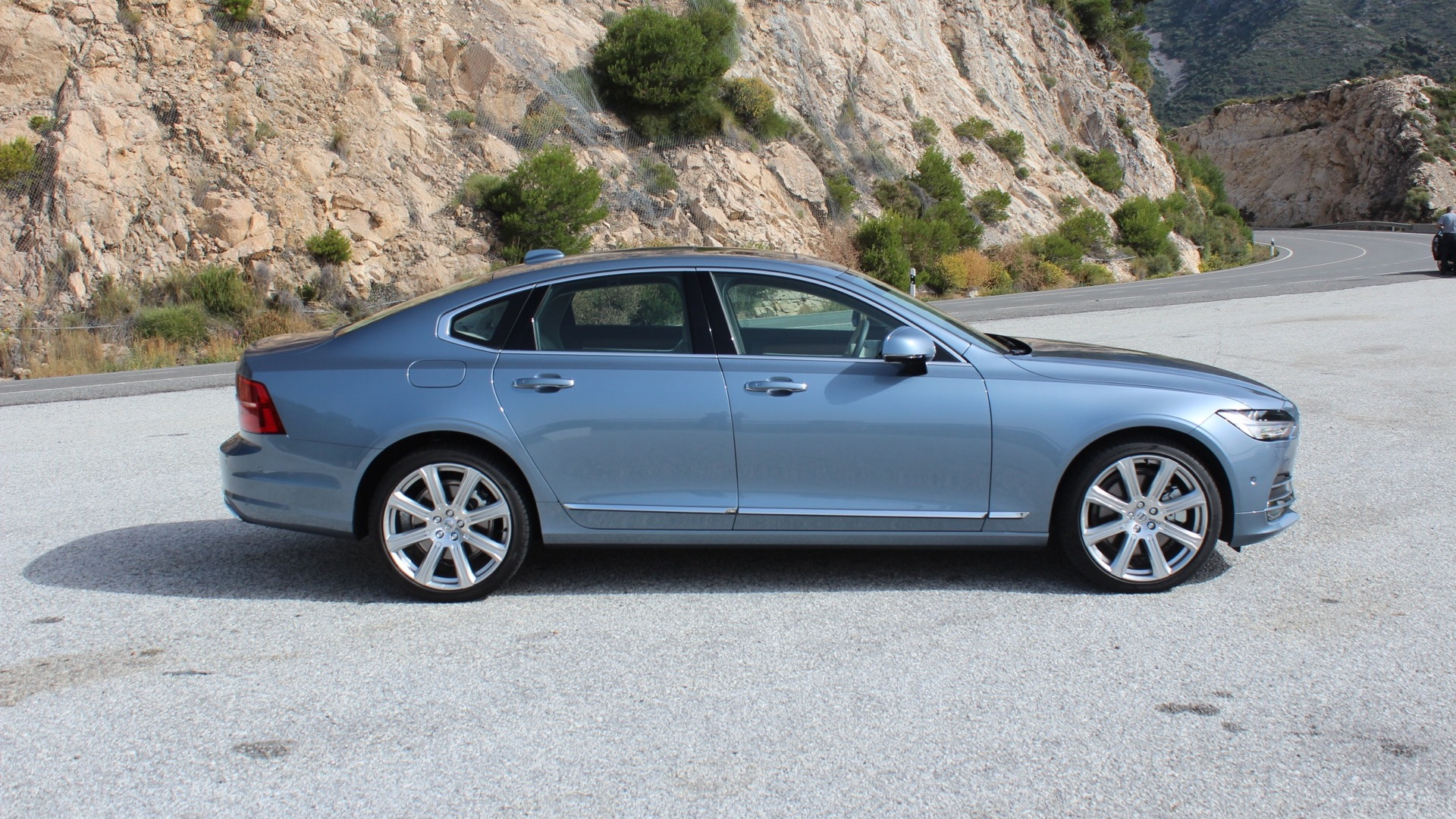 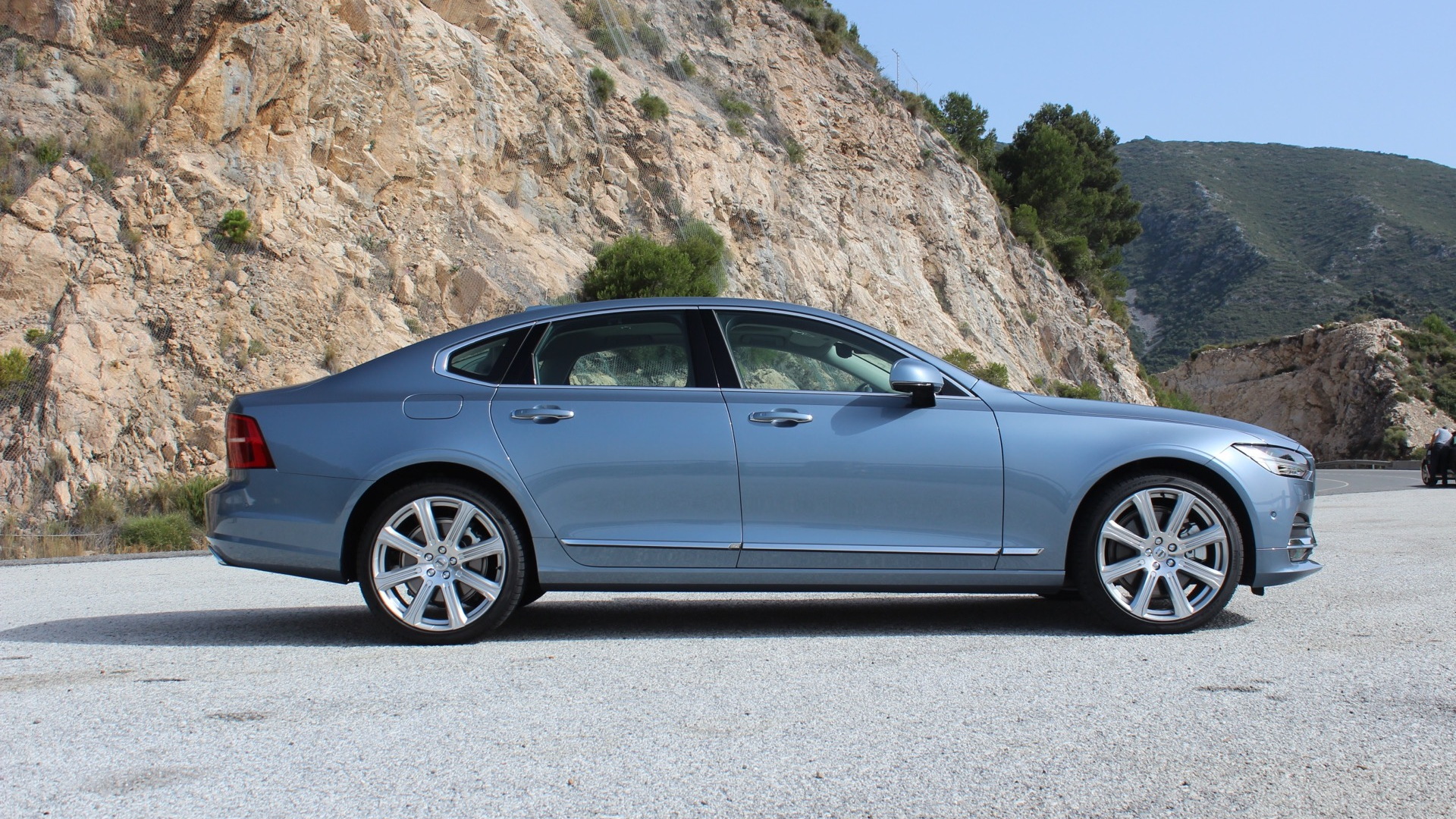 With Volvo’s most recent products, including the 2017 Volvo S90 sedan and upcoming 2018 V90 wagon, the Swedish automaker is wholly embracing its Scandinavian roots.

From the upright concave grille, the prominent brand ironmark, and the elongated hood in front, to the name proudly spelled out across the rear, and the organic, French-curve upkick of the curved side glass at the rear, on the outside the new S90 sedan loads on retro cues from the great P1800 sports car. And then it embraces Scandinavian design more than ever inside.

Specifically, that’s design that’s functional, elegant, and not overly complicated. It’s also design rooted in light, and in seeing the rugged terrain and its stark contrasts between seasons, from the opressively dark, candlelit hibernation days of winter to the sun-soaked days of summer, when the sun never seems to fully set.

Volvo is indeed reemerging from a great winter slumber. If last year’s new XC90 crossover suggested that the brand has better days ahead, the S90 lineup is a confirmation that its rugged cousin was no fluke.

The brand has never had a flagship luxury sedan that’s anywhere close to a sales success, but the new S90 has the best chance ever to break into the segment. Looking back nearly 20 years ago, to when Volvo first released its S80 sedan, marking a new strategy moving away from its utilitarian roots and into the lixury market with the introduction of the P2 platform that would become the brand’s lifeline, Volvo has struggled to reach anywhere close to the U.S. sales of rival Mercedes-Benz, BMW, or Audi models.

Volvo still has a long way to go on brand cachet, but it’s gaining fast, and after a first drive of the S90 sedan and its V90 wagon counterpart, we think these models will factor into the market as legitimate counterpoints to those German stalwarts and distinctly different alternatives that will conquer sales from those models—and in faster fashion, from Acura, Infiniti, Lincoln, or even Lexus.

The automaker notes that 150,000 premium sedan leases will mature this year, and it hopes to conquest many of those; five percent of the premium-sedan market is its modest target at this point.

Even more of a revelation than the XC90

Once you see the S90 as a true rival to many of these luxury sedans, it’s quite likely this one will charm you. The S90 is built on the same Scalable Product Architecture (SPA) as the XC90 crossover, and like that model introduced last year, it’s a winner—heading down the road with just the right level of heft and poise, driving with the right amount of lightness.

There’s superb comfort—dynamic comfort—here, with a plush but well-controlled ride giving the driver enough control but pleasing passengers without too much bobbing or pitching over backroads and choppy surfaces.

And the cabin S90 is exceptionally quiet inside. The super-tight body structure and smart noise insulation techniques are part of it; so is Volvo’s incorporation of active noise cancellation, which counters any engine boom and road coarseness.

That same system supplements engine sounds in the car’s Dynamic mode. And before you think of that system as silly, in a large luxury car that has no paddle shifters or even sporty undertones, the S90 performs to a satisfying level in the T6 form we drove—with the special supercharged-and-turbocharged version of Volvo’s 2.0-liter inline-4 engine line, called Drive-E, plus all-wheel drive. Lesser T5 models have a turbocharged 250-hp version of the same engine, but with front-wheel drive.

Not scorching, but strong and reassuring

“Relaxed confidence” is the catch phrase Volvo uses to describe the way it’s tuned and configured the S90, and we think it’s apt. The S90 T6 is at its most tepid from a standing start, when mashing the accelerator to the floor momentarily does surprisingly little, with no quawk of the tires whatsoever; but the moment revs rise toward the 2,000-rpm range, this engine feels every bit like a replacement for a big 6-cylinder engine. Between the two, the T6 can dash to 60 mph in 5.7 seconds, while the T5 takes 6.5. A T8 model, arriving later in the model year, will produce about 400 hp from its plug-in hybrid powertrain and will likely be the quickest of them all.

Both versions of the S80 come with an 8-speed automatic transmission. From supplier Aisin, it provides smooth, quick, unobtrusive shifts, varying slightly in urgency depending on the mode.

Fortunately Volvo hasn’t messed too much with one thing: the seats. They remain the same delightful, supportive, orthopedically designed seats that Volvo has used in other models. In our test T6 they’re adjustable in all the right ways, with extendable thigh support, great all-day back support, and enough side support to suit this model’s dynamic but not racy personality.

This is a true five-passenger car, with enough legroom and (barely) enough headroom beneath the swoopy roofline. There’s one seating disappointment here, though: Getting into and out of the back seats require far more shimmying than is required in other sedans its size; there’s something restrictive about the roofline combined with the door cut.

Somewhere between the 5er and the 7er, the E and the S

At about 195 inches long, with a wheelbase of around 116 inches, the S90 is slightly larger than the Mercedes-Benz E-Class, BMW 5-Series, and Audi A6 yet smaller then the S-Class, 7-Series, and A8. Don’t be surprised if Volvo’s working on an extended-length version.

Trunk space in the sedan is impressive—not so much because of the generous 17.7-cubic-foot capacity, which includes the under-floor storage, but because of the squared-off shape of it, allowing plenty of space for several large suitcases (or yes, golf bags).

The 2018 Volvo V90 wagon, which we drove on a shorter loop, offered essentially the same ride comfort as the S90 sedan, although with a little more road noise from its more open format. For that, however, you get a lot more cargo versatility—plus a beautiful extended roofline and panoramic moonroof.

In all models, you get the awesome Sensus Touch system that replaces the clutter of buttons with a large, vertically oriented touch screen and one of the easiest, most intuitive menu systems in the business—easily allowing a quick tap or swipe for core functions like sound settings, navigation features, or climate control and only showing the essentials, in a large, legible font.

An armada of world-first protection

Of course one of the main focus areas of the S90 is safety. Of course, the body structure aims for higher standards of occupant protection, and of course, the S90 includes one of the fullest sets of safety features among lucury sedans. But there are some world firsts, too. One of them is large animal detection; it’s the first car with a standard system that will automatically brake you to a stop (or significantly reduce speed) when a moose, elk, or deer is detected. Another is Pilot Assist, the second generation of a system that interfaces cruise control, lane-keep assist, and forward collision systems, as well as high-resolution cameras and processing developed by Volvo itself in Sweden.

Pilot Assist, Volvo says, has so far been optimized for highway use, and it lets you take your hands off the wheel for just 15 seconds at a time—which we did, noting very smooth lane following, at the center of the travel lane (it doesn’t depend on striping on both sides and has true road-edge detection, claimed to be another world-first). The automaker says that it’s capable of far more, insisting that it’s a more advanced system than what Tesla has in the Model S, for instance, but that it considers such technologies as strictly supplemental to driver control.

Volvo has made a concerted effort with the S90 to include the potentially lifesaving automatic-braking systems as standard, with other warning features like Blind Sport Information System (BLIS) and Cross Traffic Alert optional; officials concede that they’re not features for which every shopper might find value.

Priced lower than other lux sedans

As for value, the 2017 S90 lineup starts at $47,945 for the T5 Momentum. A top-trim T6 Inscription model is $57,245, but fully optioned with the excellent Bowers & Wilkins sound, the air suspension, the cold weather package, and other extras, you could push past the $65k mark.

Altogether, that’s less than the Mercedes-Benz E-Class, BMW 5-Series, Acura RLX, and Infiniti Q70, and more closely aligned with the Audi A6, a model that’s near the end of its model lifecycle—and a model that’s simply not as well-equipped.

After spending a couple of days driving, sitting, and riding in these models, it’s clear that Volvo hasn’t been restrained by expectations of what the S90 should be. That’s resulted in a genuinely stylish, different, and rather enchanting new sedan. The very lack of baggage, and lack of expectations, appear to have given the Swedish automaker an underdog advantage—and the freedom to design a car that is good on its own.

After a long winter, Volvo is heading into a sunny Swedish midsummer, in full song.