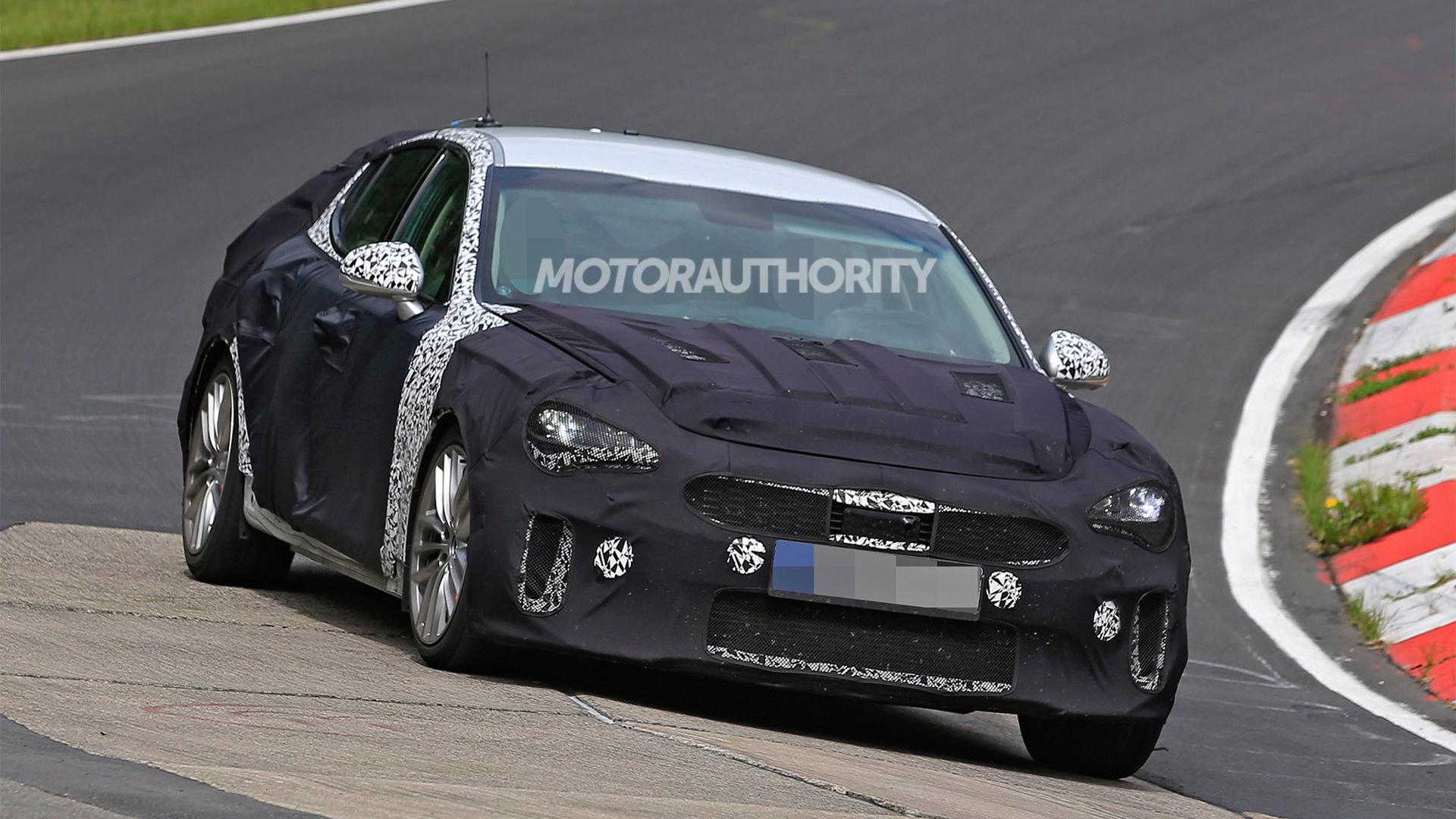 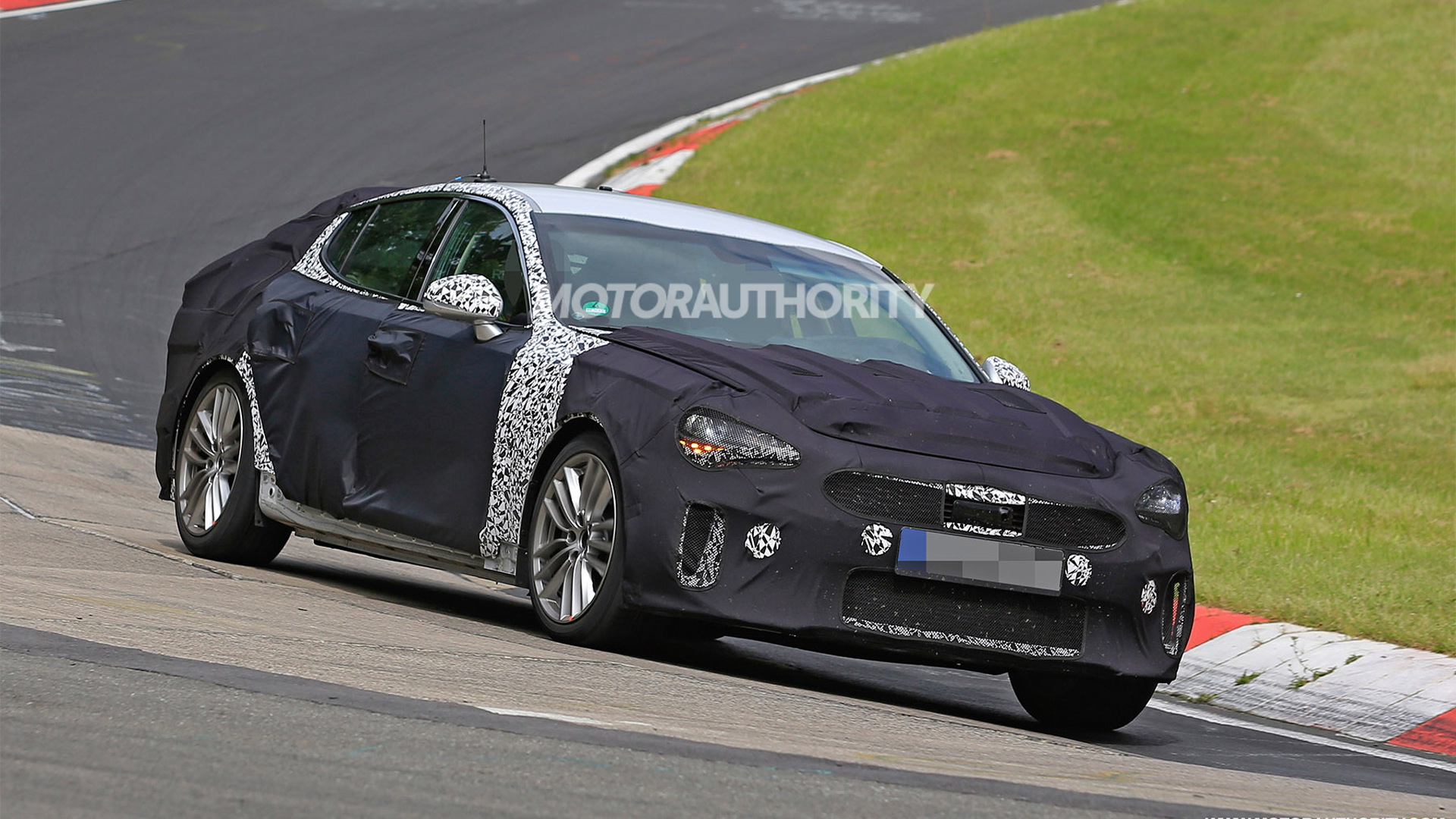 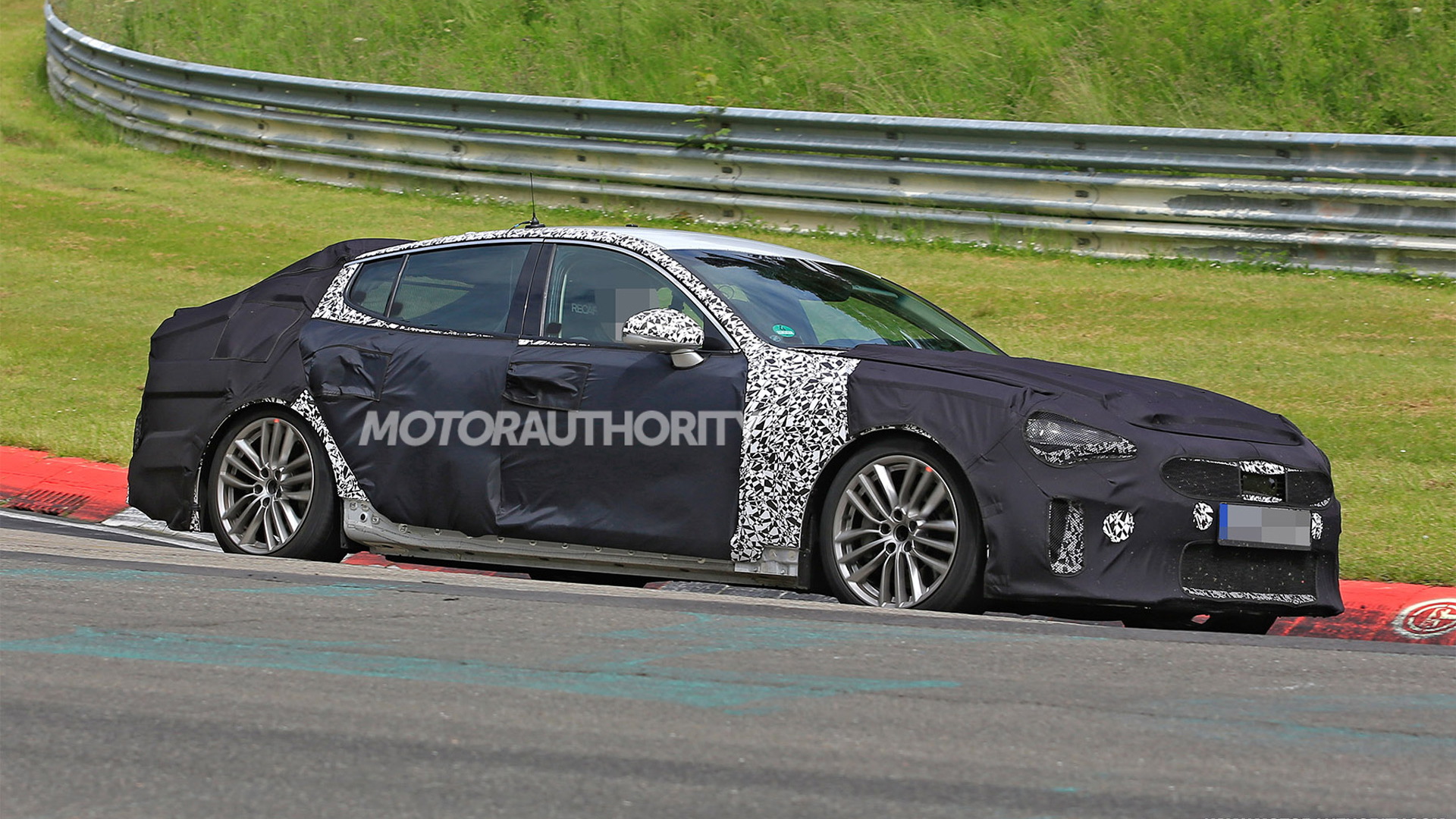 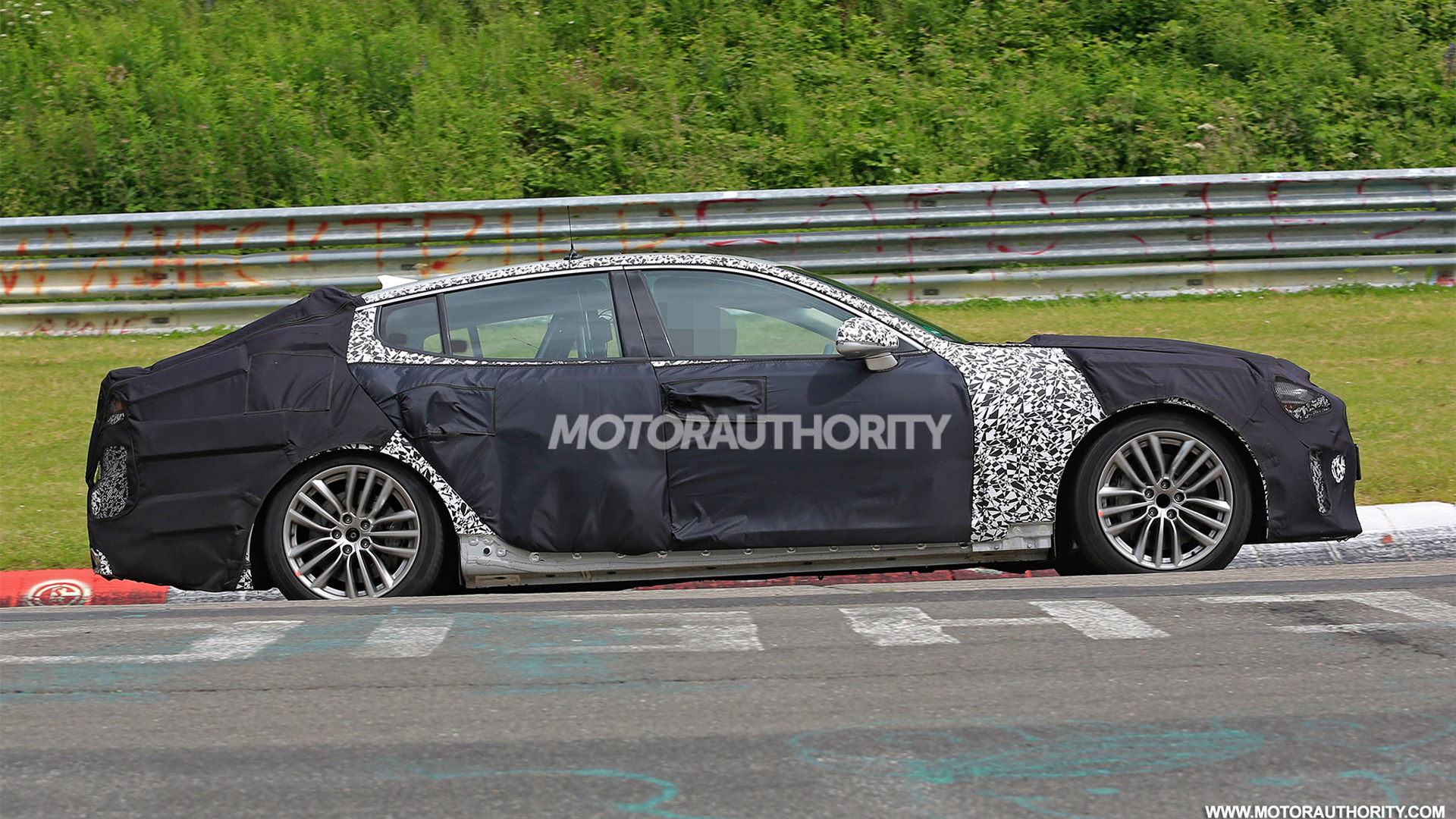 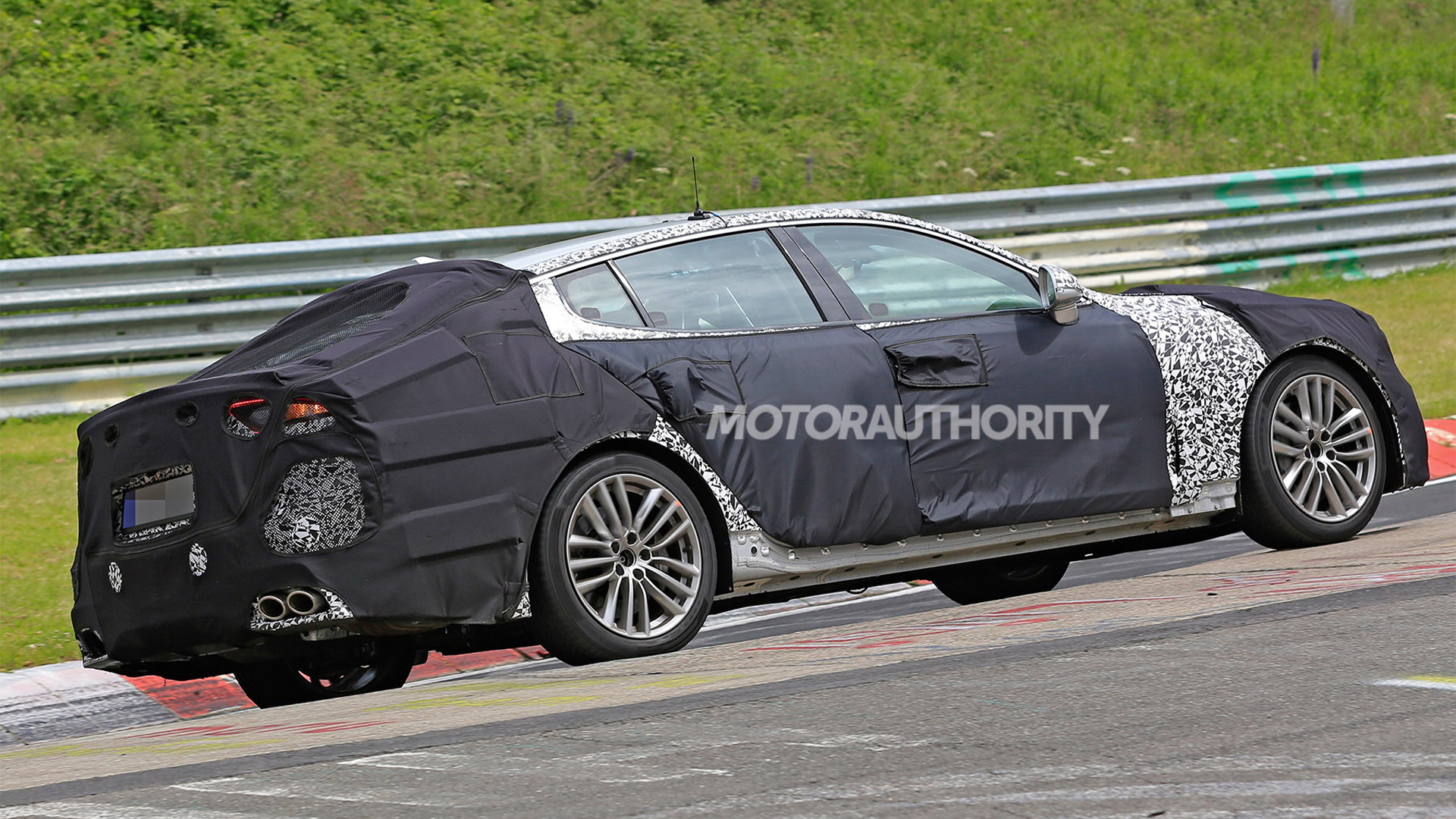 The oft-rumored sports sedan based on Kia’s GT concept from the 2011 Frankfurt Auto Show is real, and it's already on testing on the road and track.

Though heavily disguised, we can see the proportions and details are similar to those of the striking concept.

In particular, we can see the sleek profile, Kammback-style rear, pronounced front fender vent, and unique C-pillar treatment. If you think the rear end looks like an Audi A7, you aren't alone. We also like the menacing quad-exhaust tips sticking out of the rear.

We've heard the car might be called a Stinger. Kia used this name for a sports car concept unveiled in 2014. While the sports car has been ruled out for production due to lack of demand, some of its design elements—and it seems its name, too—will feature on the sedan.

The new car, whatever it ends up being labeled, will compete with sleek, mid-size luxury models such as the Audi A7 and Mercedes-Benz CLS. Of course, we expect the Kia to come with much sharper pricing.

It’s likely the platform will be a shorted version of the platform found in the Genesis G80 (formerly Hyundai Genesis) and G90. Power should come from a turbocharged V-6 engine in range-topping trim, with drive going to the rear wheels via an 8-speed automatic transmission. A 4-cylinder engine and possibly a hybrid option could also be offered.

A reveal is expected to take place this year, possibly at the 2016 Paris Auto Show in late September. Production isn’t due to start until early next year which means we’ll likely see the car arrive in showrooms for the 2018 model year.

While both Kia and sister brand Hyundai built their reputation on cheap and cheerful cars, declining profits despite increasing sales are forcing the automakers to target more profitable segments. Hyundai’s profit fell for the third straight year in a row in 2015, coming in at approximately $5.3 billion or about 13 percent less than the previous year. In response, Hyundai has made moves into the luxury segment with the launch of Genesis. Kia on the other hand will go after buyers looking for sporty, premium models.