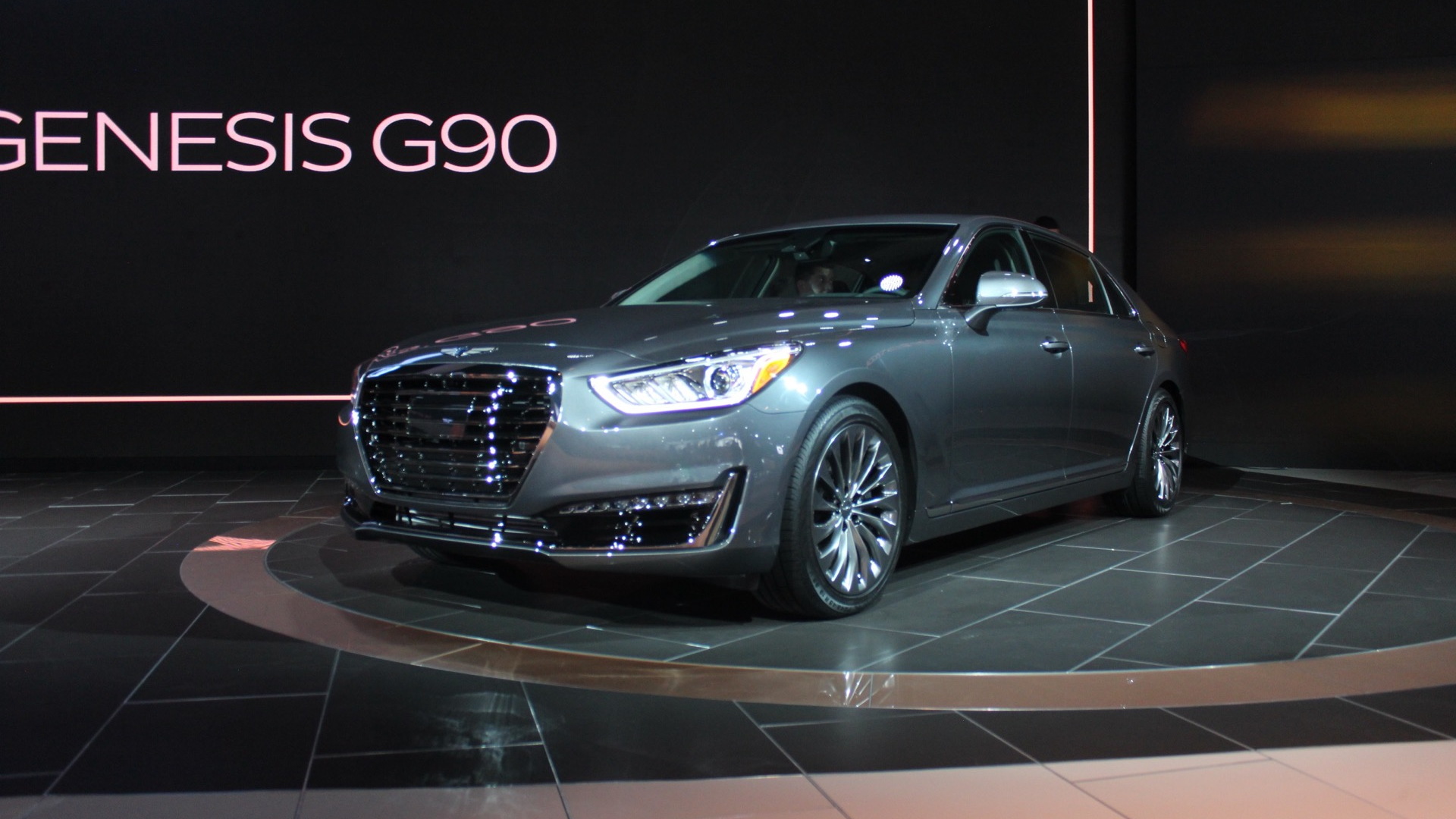 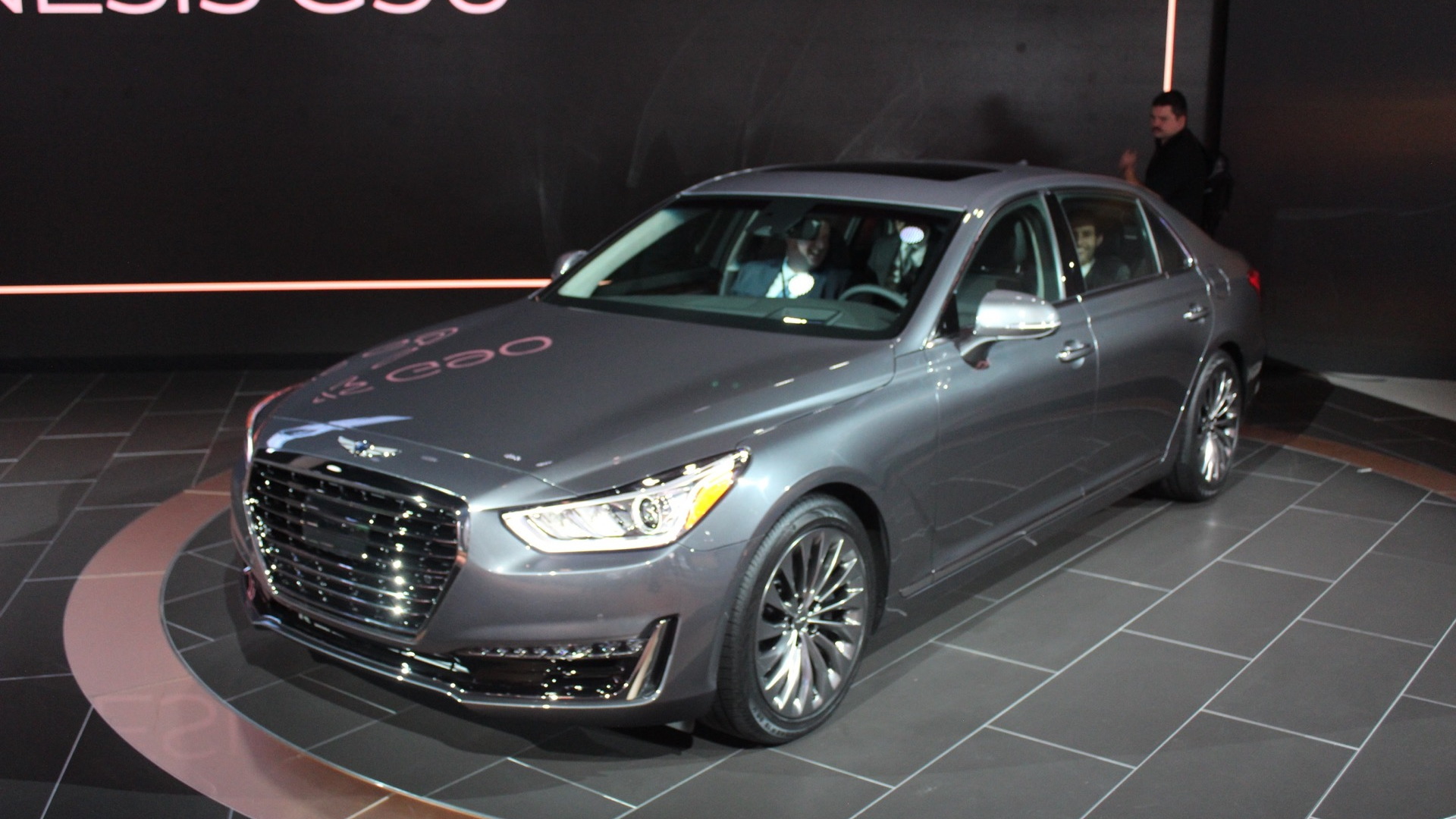 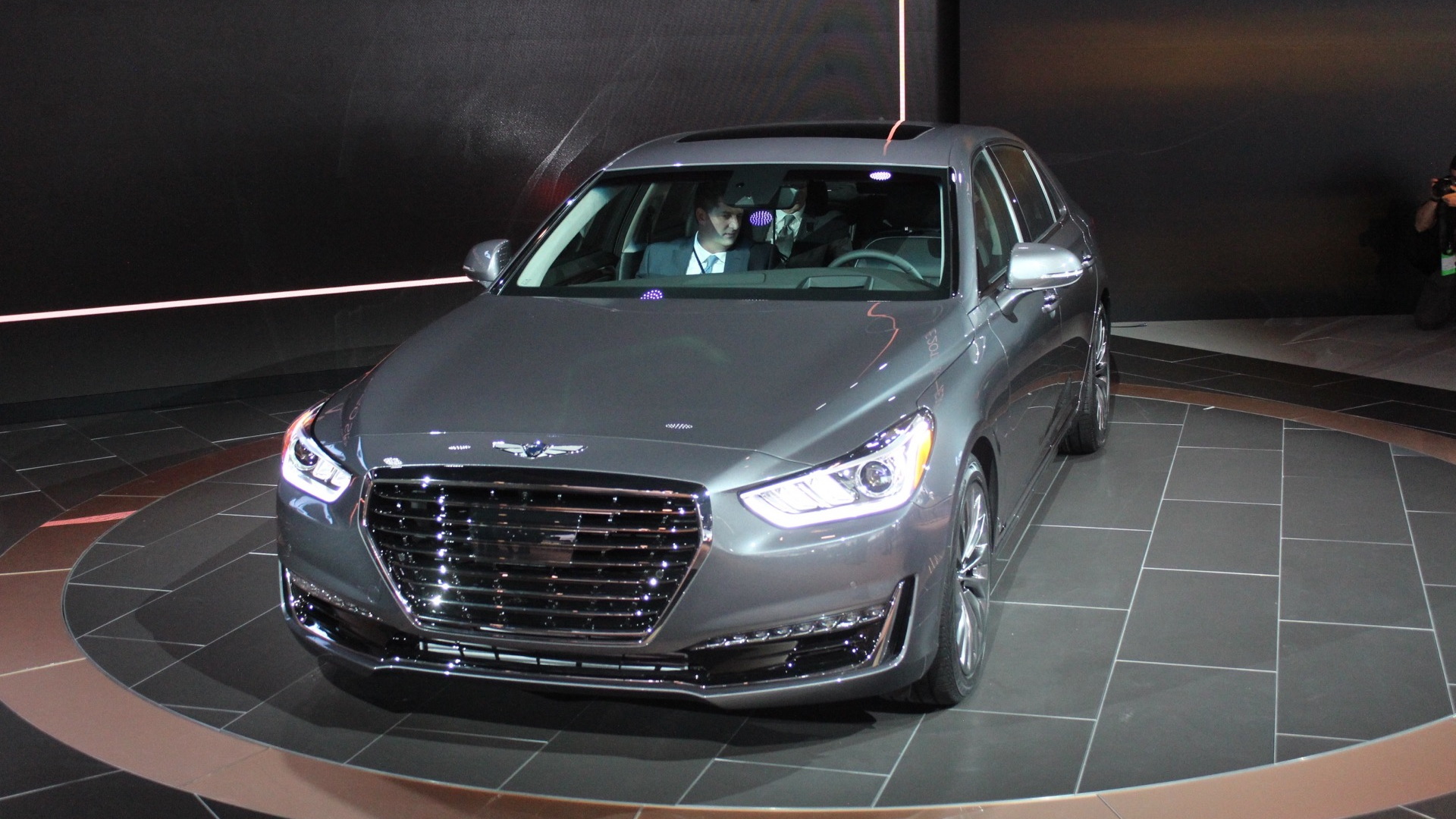 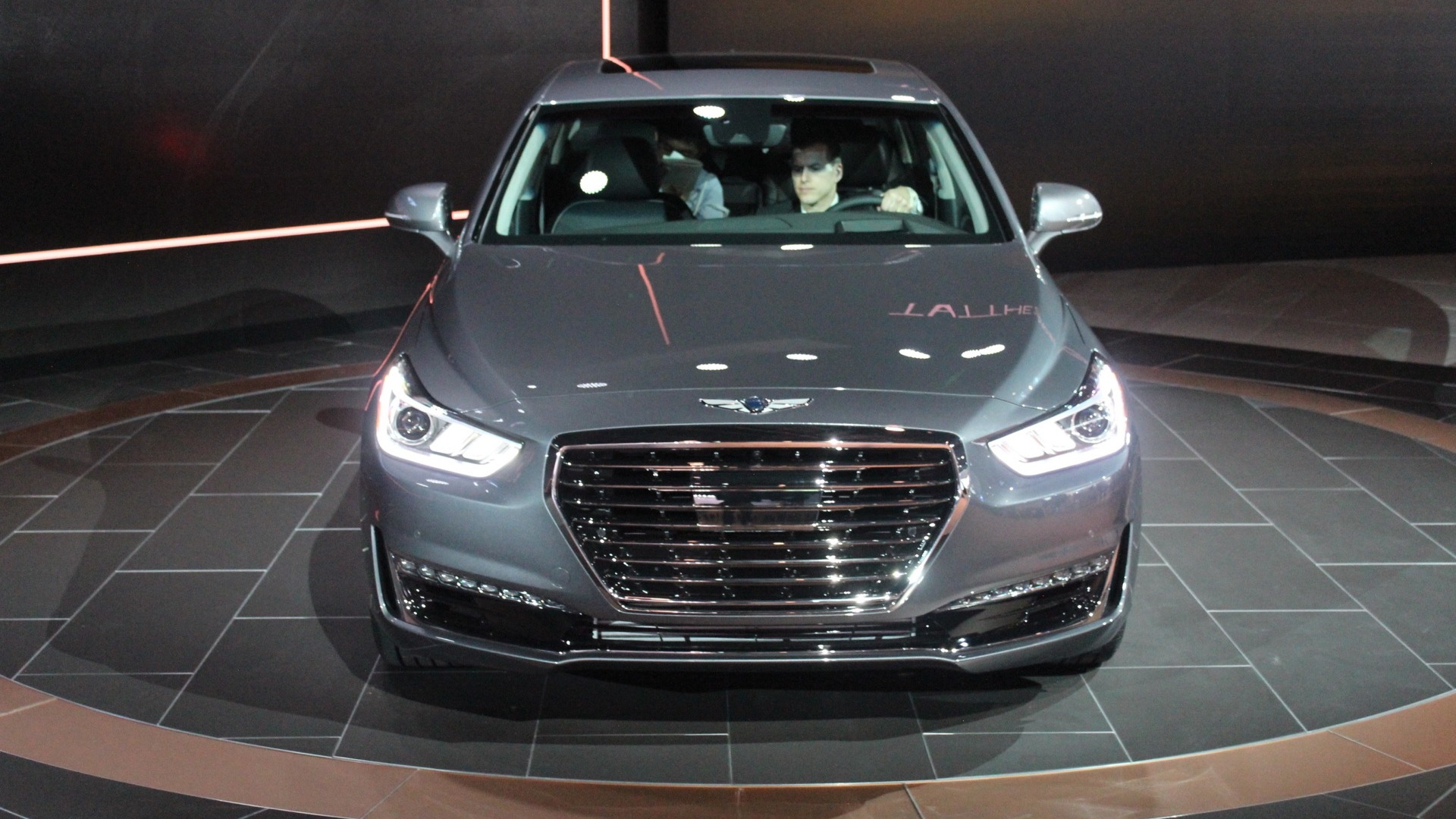 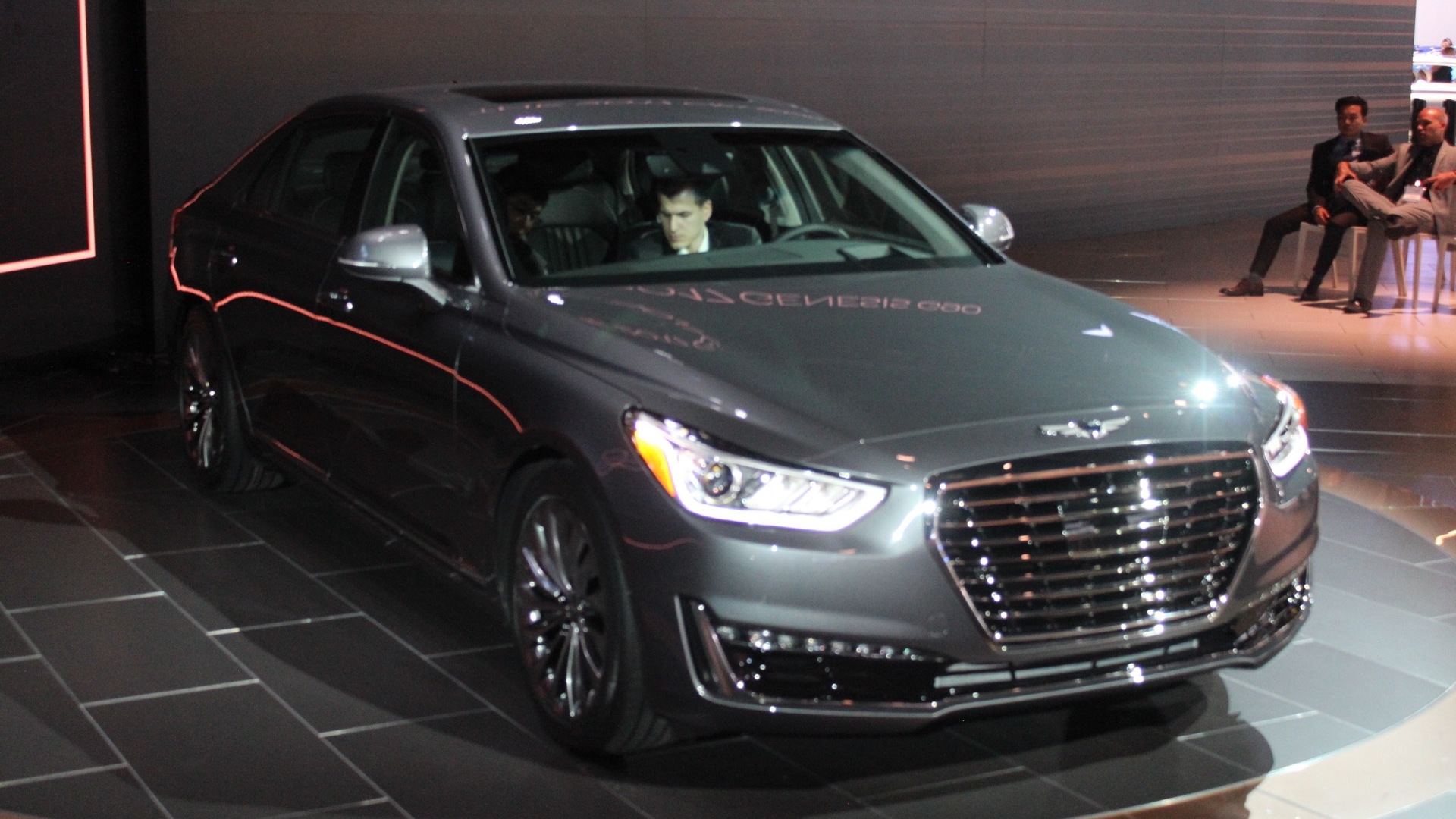 Hyundai’s new Genesis luxury brand held its first press conference outside of Korea, at this week's 2016 Detroit Auto Show. The newly established brand has just one model at present, the Hyundai Equus-replacing G90, but it’s the flagship and it heralds what’s to come for the rest of the Genesis lineup. We’re talking five more models due by the end of the decade.

Focusing on the G90, the new sedan will go on sale later this year, as a 2017 model. We don’t think more established rivals like the German trio have anything to worry about but we could see the G90 stealing a few sales from cars like the Acura RLX, Cadillac CT6, Lexus LS and even the K900 from sister brand Kia.

Two powertrain options are being offered. The base unit is a new twin-turbocharged 3.3-liter V-6 that will deliver an estimated 365 horsepower and 376 pound-feet of torque, the latter delivered from just 1,300 rpm. The range-topper is the familiar 5.0-liter V-8 which is rated at 420 hp and 383 lb-ft. Drive goes to the rear wheels via an eight-speed automatic as standard but buyers will be able to opt for all-wheel drive.

The all-wheel-drive system is Hyundai’s H-TRAC, which in an Economy mode sends 100 percent of the drive torque to the rear wheels (90 percent is the default) but if needed can send 40 percent to the front wheels for added traction. Multi-link suspension with adaptive damping is used at both ends and the standard wheels are a 19-inch set. Four-piston brake calipers are up front and two-piston calipers at the rear.

The platform of the G90 is a stretched version of the rear-wheel-drive architecture that made its debut in the 2015 Hyundai Genesis (this car will be renamed the Genesis G80 when it undergoes a facelift later this year). Unfortunately, weight is an issue. At the car’s Korean launch, we learned that the lightest version weighs a substantial 5,335 lb. Remember, the latest BMW 7-Series even in long-wheelbase guise weighs as little as 4,225 lb.

Sit inside and you’ll find acres of room. This is thanks to a generous 124.4-in wheelbase. The overall length is 204.9 in, which is comparable to the length of long-wheelbase rivals. Filling that space are niceties such as Italian leather and real wood plus comfy seats (with 22-way adjustment for the driver and 16-way for the front passenger); a 12.3-inch display; a camera-monitoring system; a premium sound system from Lexicon; tri-zone climate control; and wireless charging technology for mobile devices.

There is also a long list of electronic safety and convenience features such as adaptive cruise control with lane keep assist, autonomous emergency braking with pedestrian detection, a head-up display, and warning systems for blind spots and driver attention. LED headlights are available and standard on the V-8 model.

Pricing for the Genesis hasn’t been announced but we expect it to match or at least come close to prices for the outgoing Equus, which currently starts at $62,450, including a $950 destination charge.