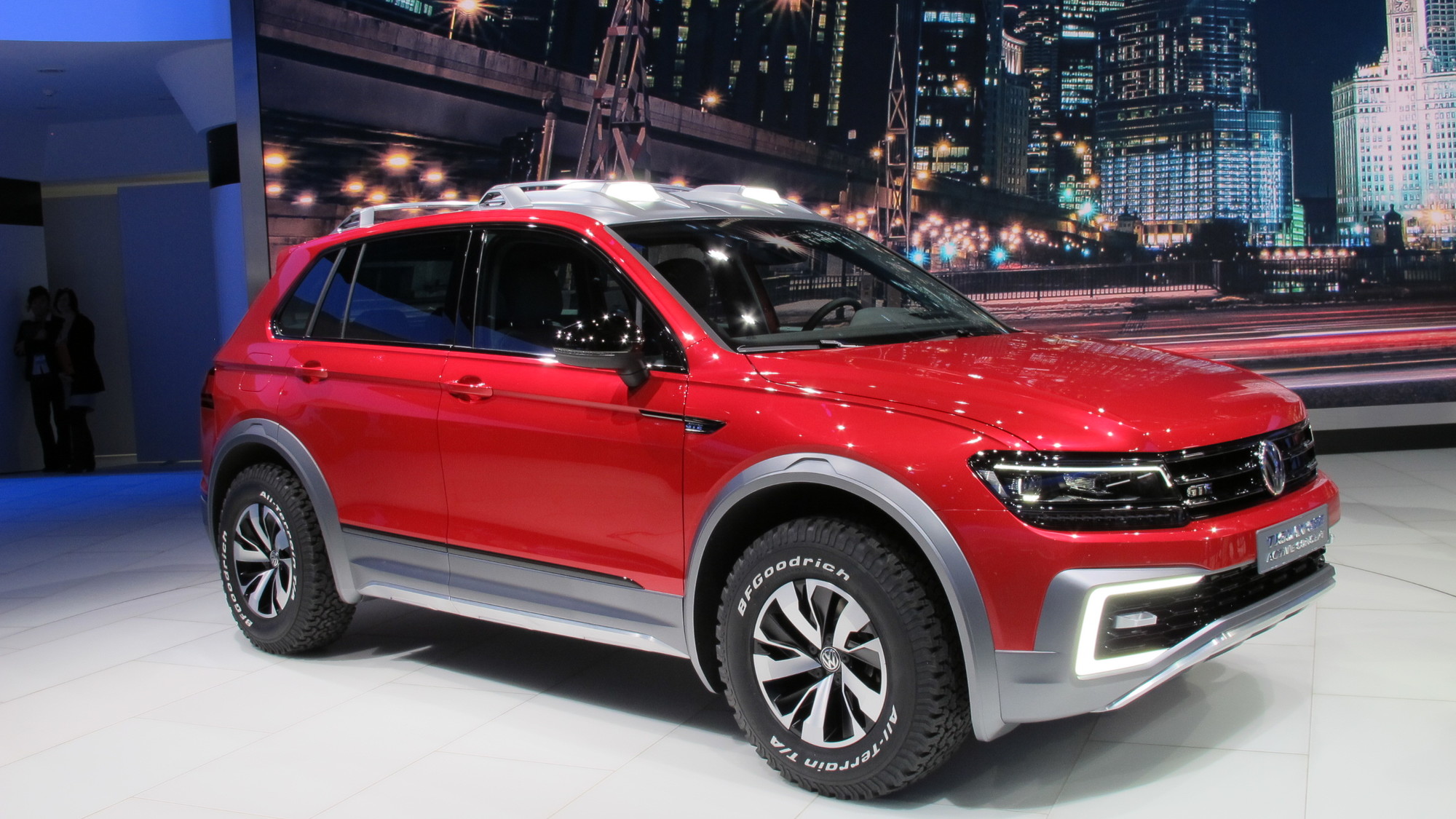 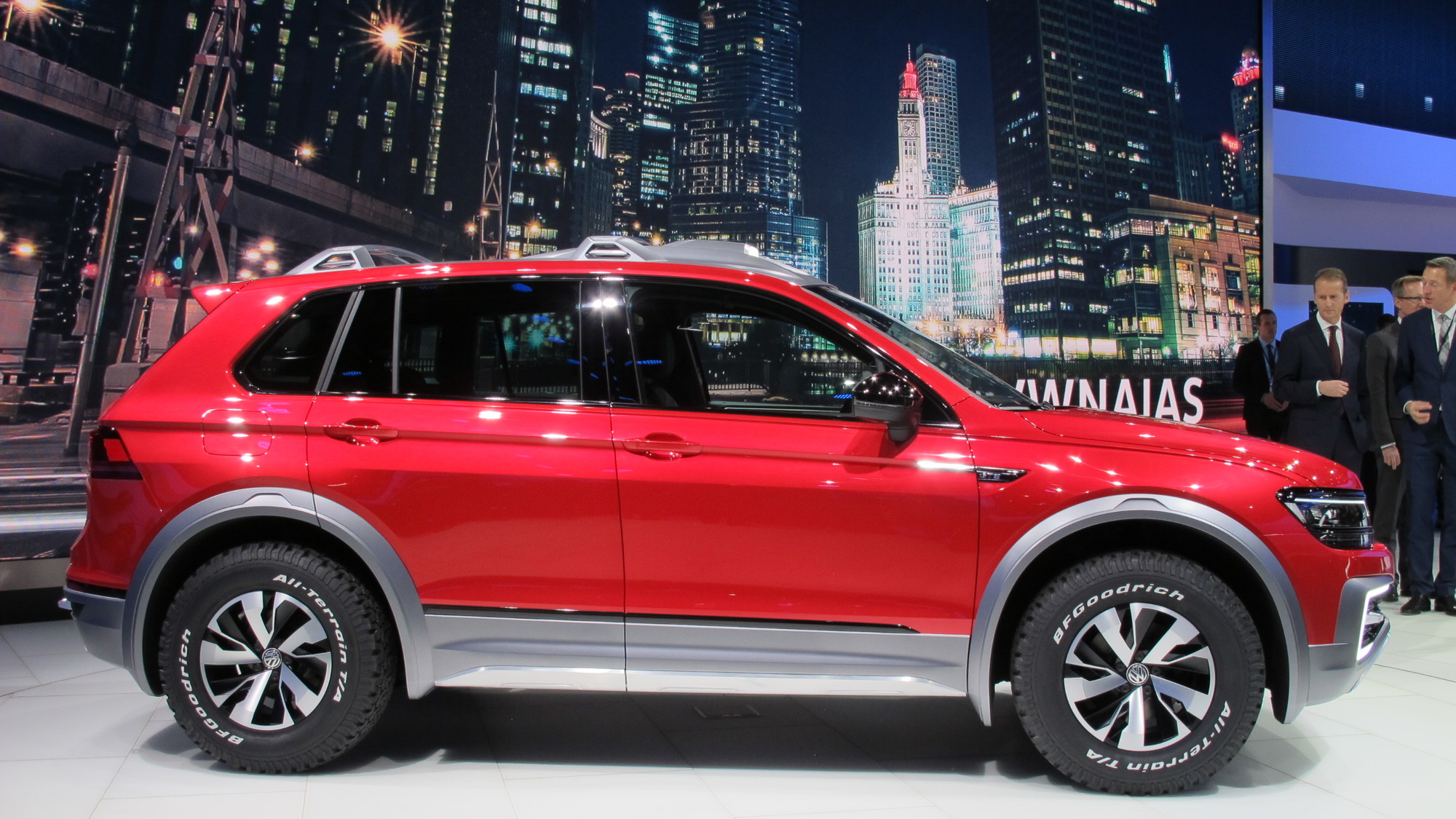 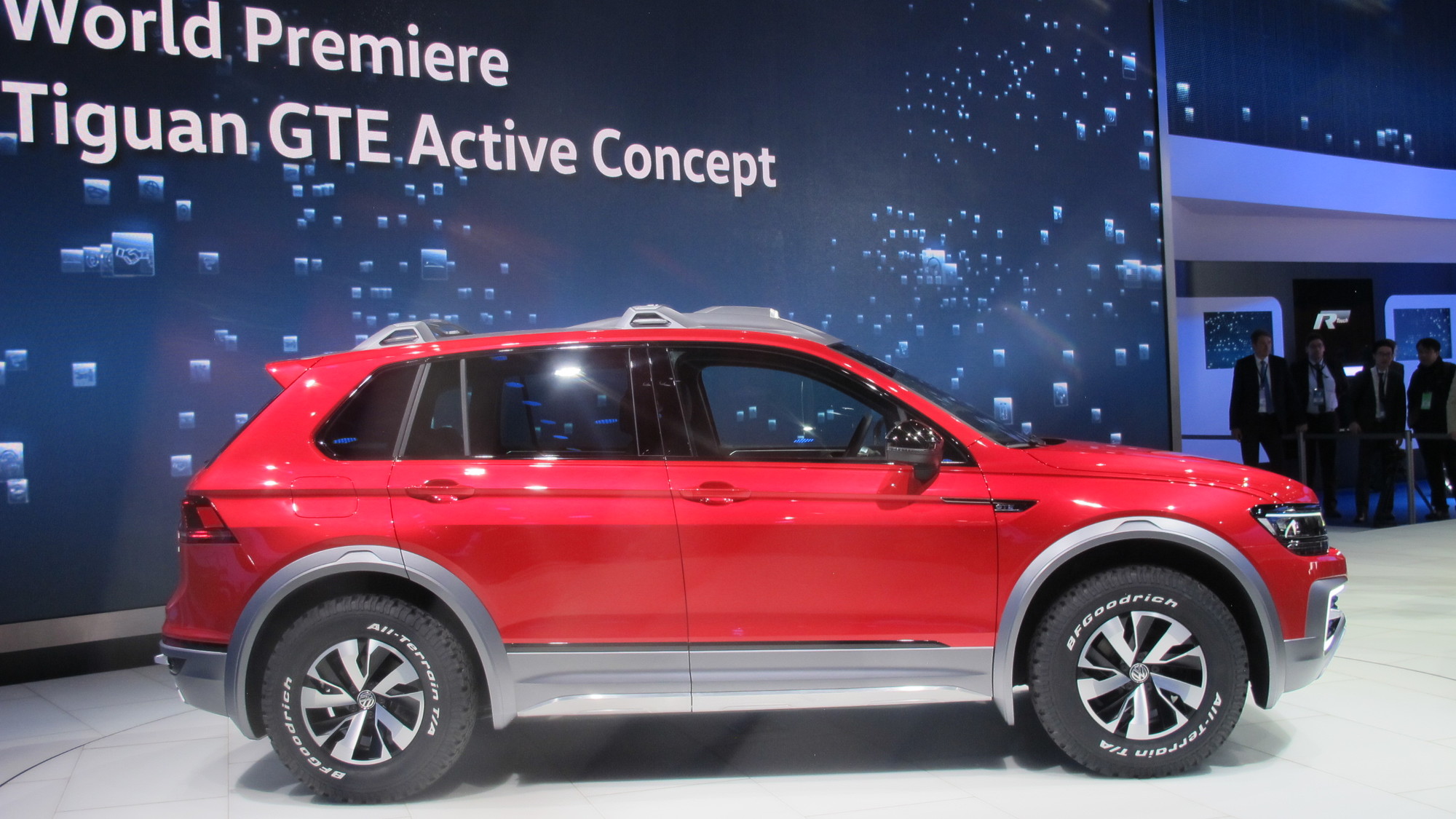 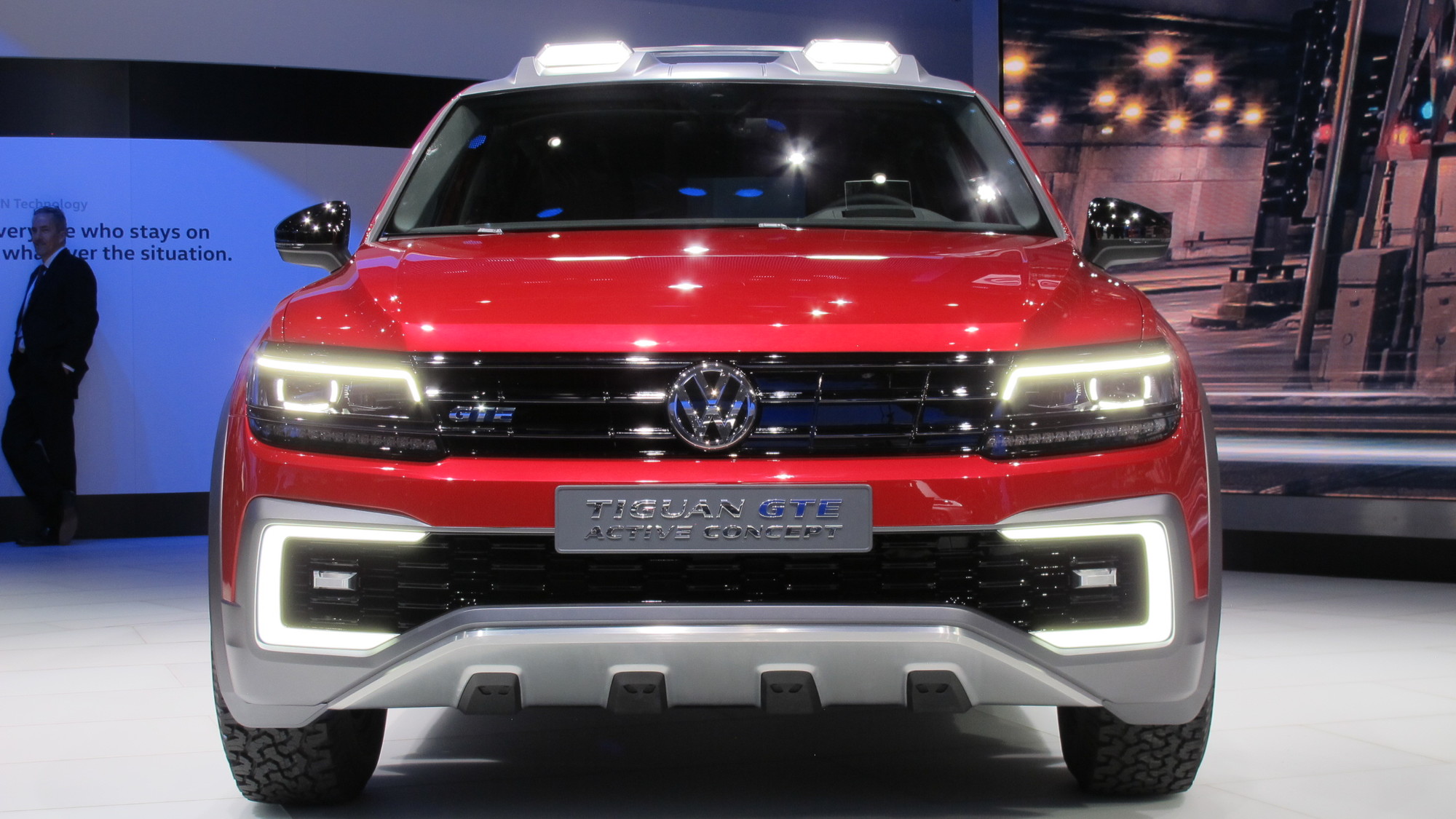 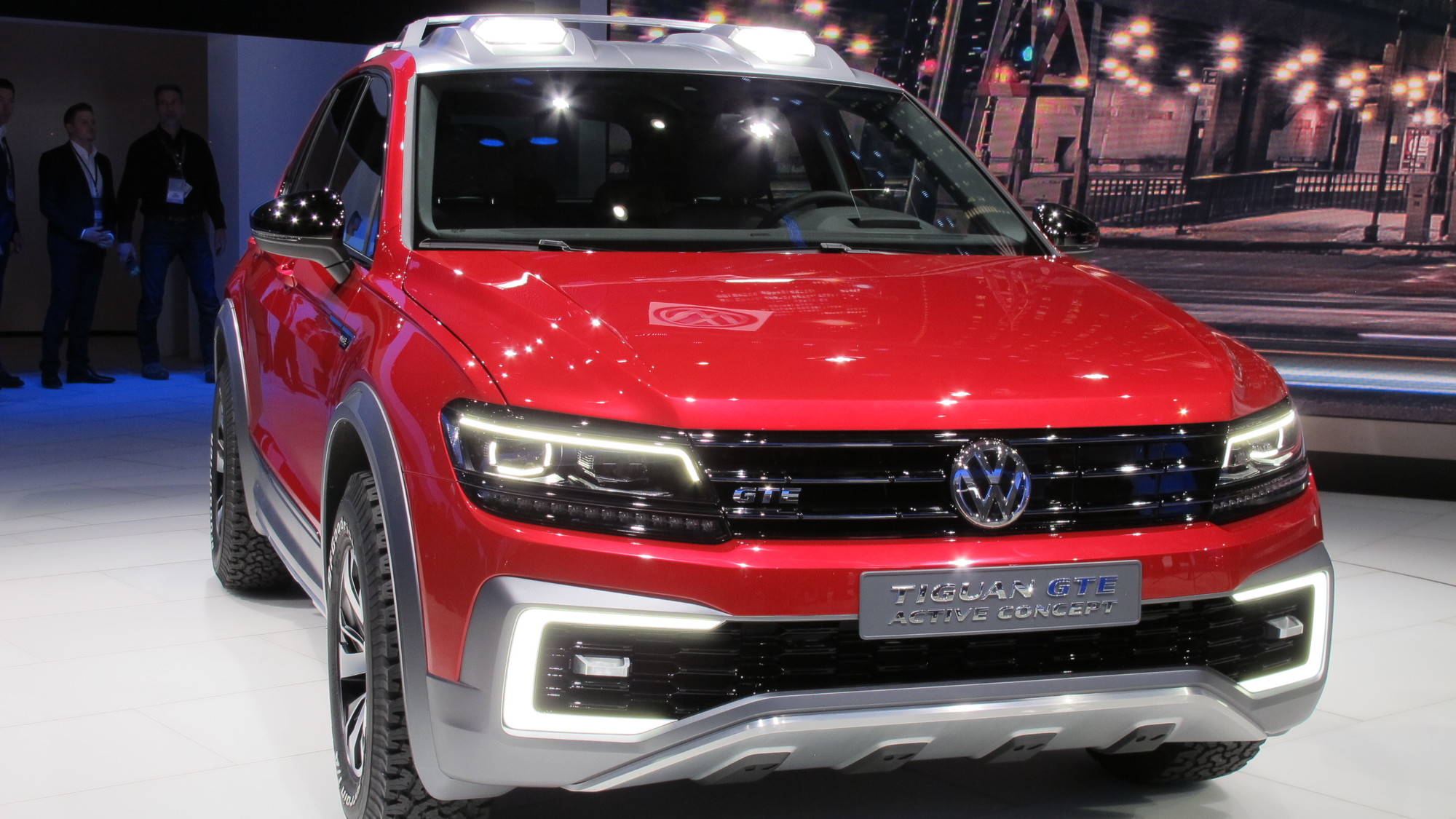 With diesels in the rearview mirror, Volkswagen is pursuing an electric future. At this week's Detroit Auto Show, VW is showing a kind of plug-in hybrid we haven't seen before: an off-road oriented crossover.

The Tiguan GTE Active concept is based on the European-spec next-generation Tiguan compact crossover. The powertrain consists of a turbocharged four-cylinder engine that makes 148-horsepower and 184-pound-feet of torque, a 54-horsepower front electric motor,  a 114-horsepower rear electric motor, a 12.4 kWh lithium-ion battery, and a six-speed dual-clutch transmission. Total system output is 221 horsepower, and total driving range is 580 miles. The front motor is located within the transmission.

Volkswagen says the vehicle can be powered by the front, rear, or all four wheels. When the engine provides the power alone, it drives the front wheels. The Tiguan GTE Active has three drive modes: E, GTE, and Hybrid. The E mode is for electric driving, and is the default mode upon startup. The top speed is 70 mph in this mode, and the Tiguan GTE Active can drive 20 miles on electricity only.

The GTE mode is for sporty driving. The transmission, throttle, engine, and steering programming are more aggressive. The vehicle uses its full 221 horsepower when GTE mode is activated and is capable of a 6.4-second 0 to 60 mph time and a top speed of 120 mph.

The driver can choose from several driving programs for the 4Motion Active Control all-wheel-drive system: On road (Comfort and Eco), Offroad (Rocks, Sludge and Sand, and Gravel), Sport, Snow, Charge, and Battery Hold.

The Tiguan GTE Active is based on VW's front-wheel-drive-based MQB platform that underpins the Golf compact car, among others. However, changes have been made to enable off-road capability. The approach, departure, and breakover angles are improved, and ground clearance increases from 7.1 to 8.9 inches. VW has also added a front skid plate, covered the bumpers in a durable polymer, added tow hooks to both bumpers, installed a pair of LED auxiliary spotlights, and outfitted the roof with high-strength cross rails. Aggressive off-road 16-inch tires provide grip on slippery surfaces.

Inside, the five-passenger concept has VW's next generation infotainment system, which features a 9.2-inch touchscreen, Apple Car Play and Android Auto, and access to other apps through Car-Net App-Connect. It also responds to gesture control commands. All of the controls on the center stack are touch sliders, which is not a good idea.

Volkswagen is yet to show the version of the Tiguan that the United States will get, but says it will be available in 2017 and be offered with a longer wheelbase and a seven-passenger variant.

We suspect that the plug-in hybrid technology in the Tiguan GTE Active concept will make it to the production version, as well as several other VW vehicles. The off-road features probably won't be offered for this family hauler.