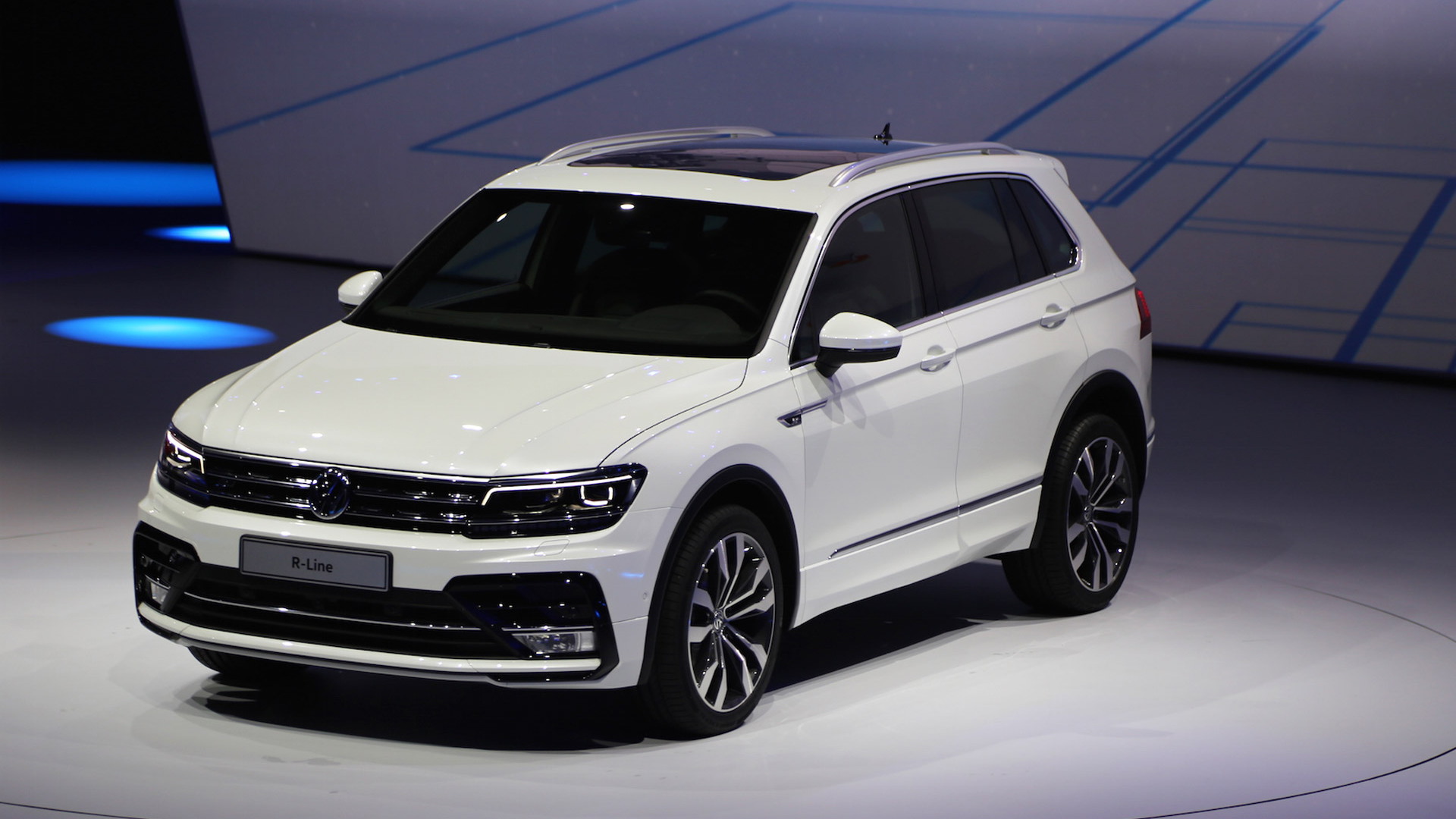 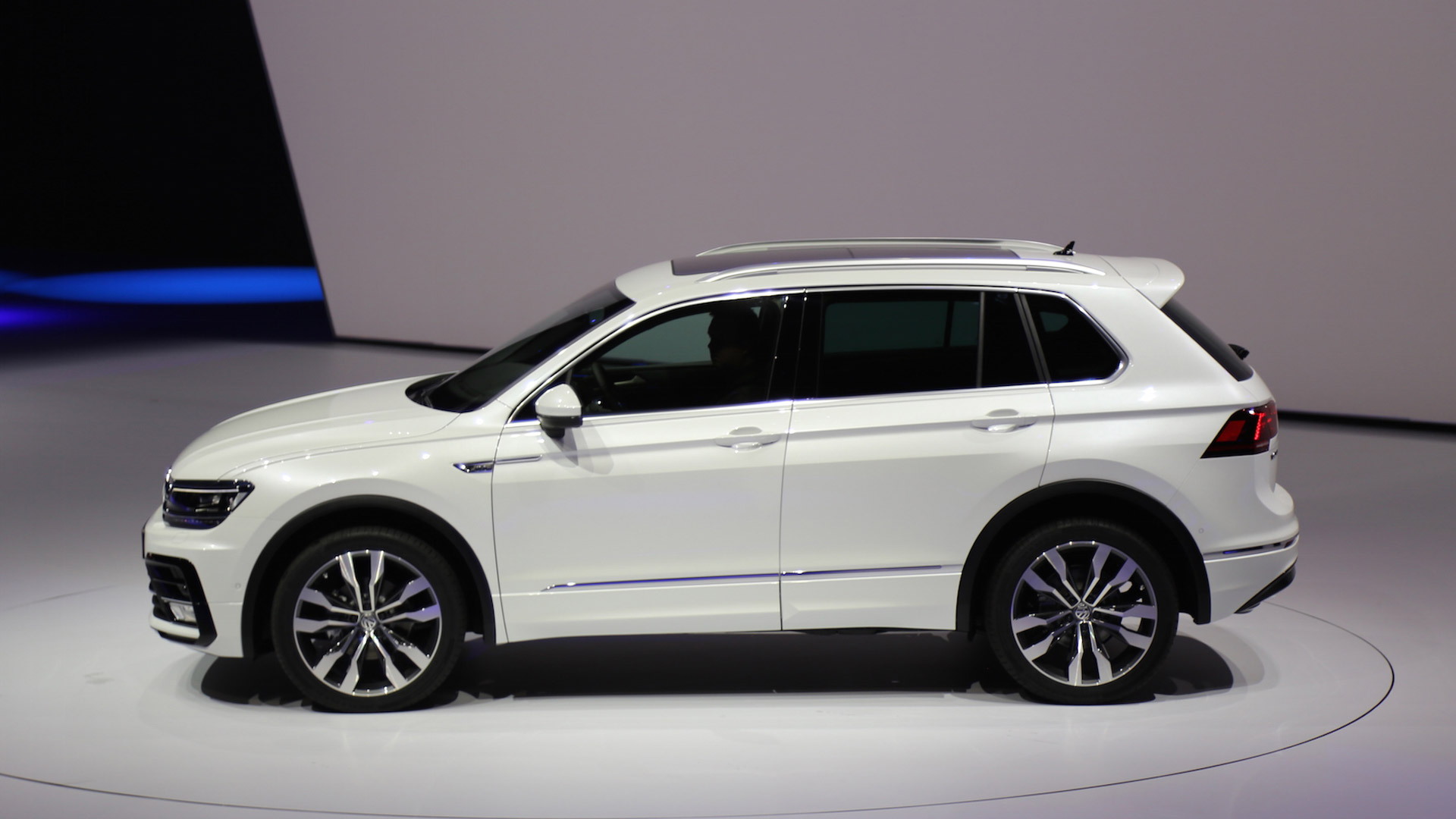 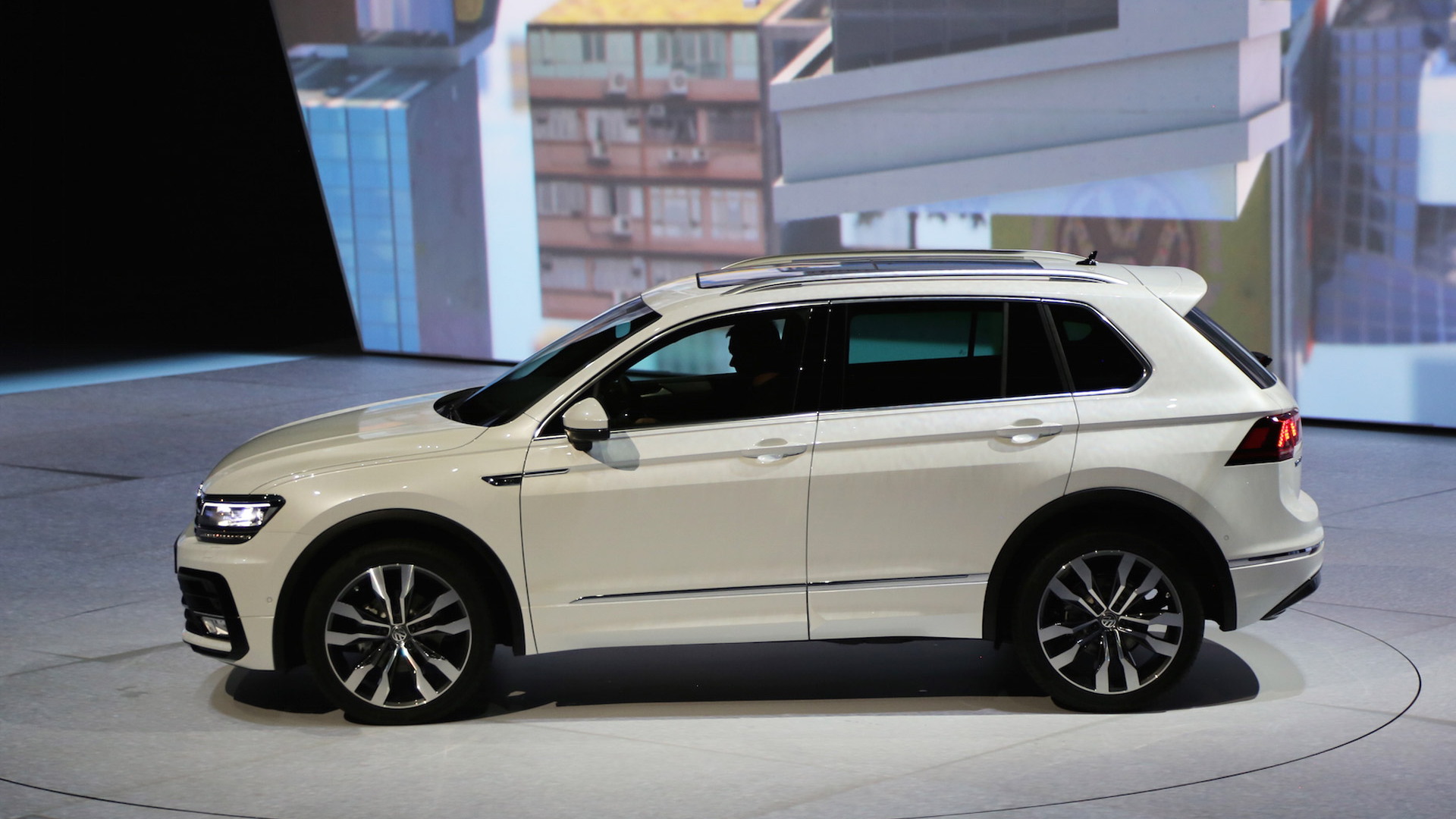 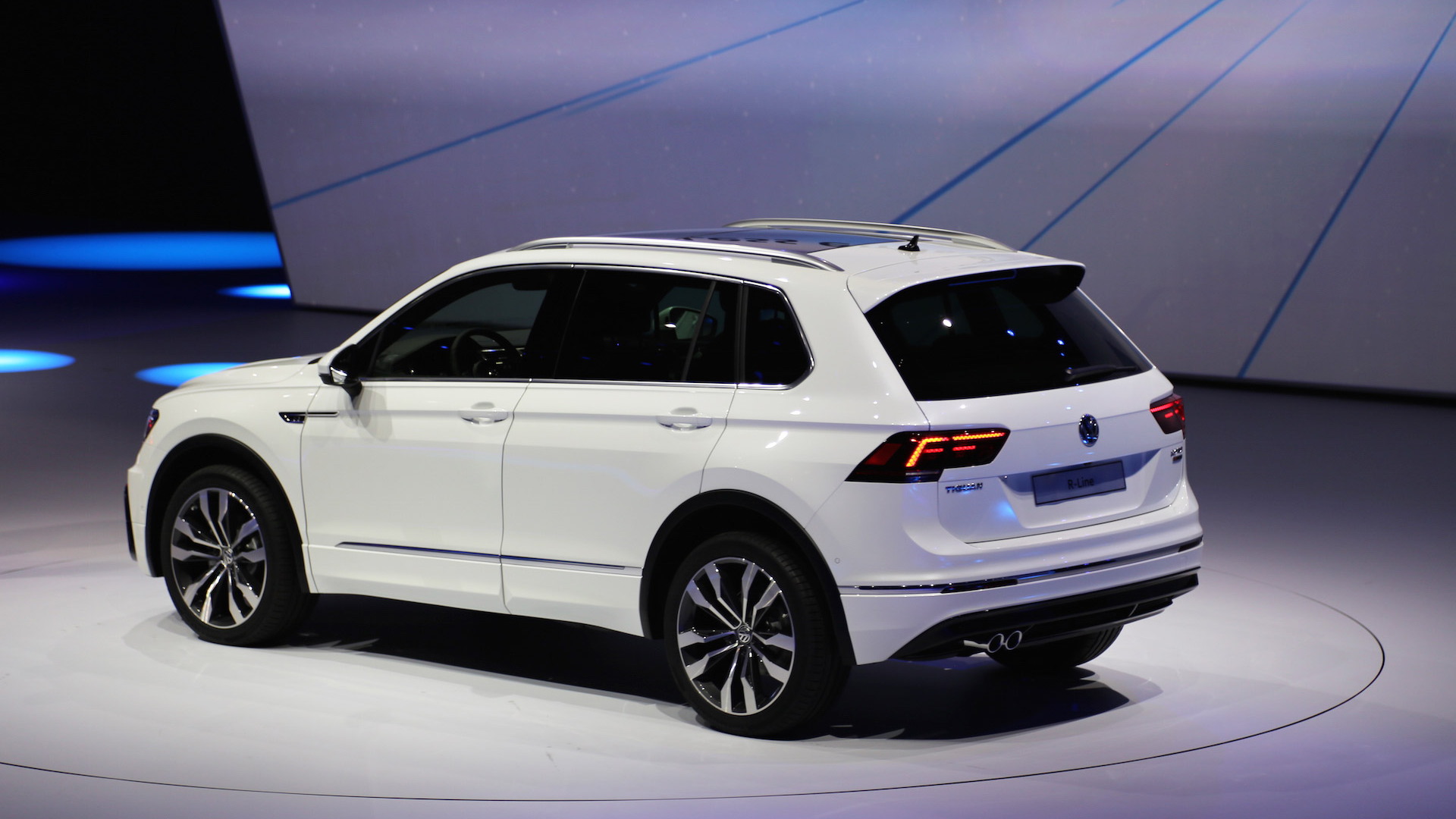 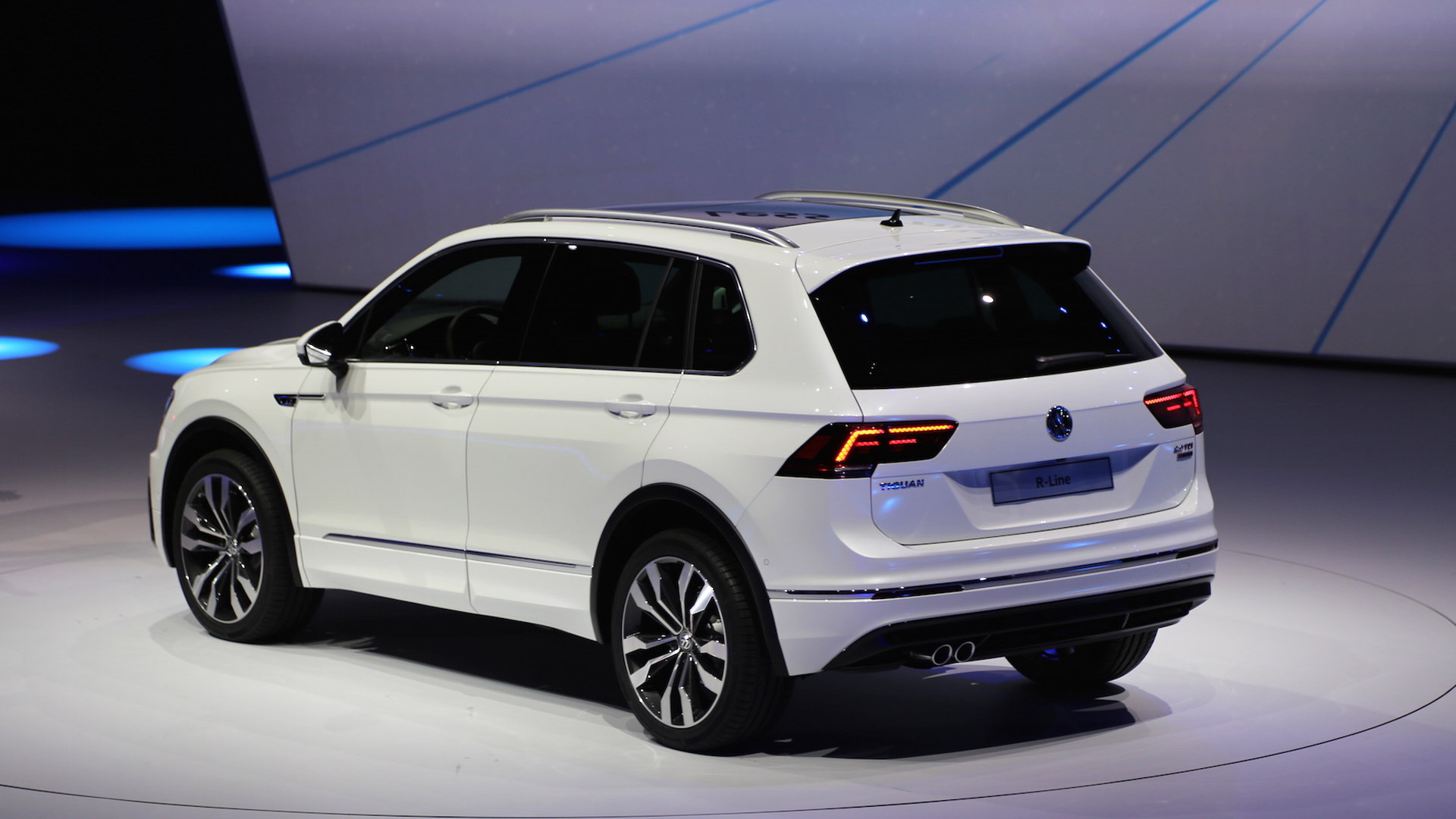 Volkswagen has unveiled its all-new, second-generation Tiguan compact crossover SUV at the 2015 Frankfurt Auto Show. This is the version that will be sold in most markets, but the one headed Stateside, in late 2016 or early the following year, is expected to differ slightly. Ours will offer more room and have third-row seats, perhaps with the latter coming as standard. And production will be handled at VW’s plant in Puebla, Mexico.

But the design and technology is pretty much what you see here. The new Tiguan adopts VW’s flexible MQB platform and is slightly larger than the model it replaces. VW tells us that it is longer, wider and lower. And being MQB-based, it means the new Tiguan is also loaded with more tech.

The Tiguan is a crucial model for VW, with the more than 2.64 million examples of the original being sold. But in the U.S. the vehicle still lags its American and Japanese rivals when it comes to sales. That’s why the new model has been given a tougher, more rugged look that’s meant to resonate better with American shoppers. And there's still the sporty R-Line package, which now adds an aggressive front bumper and wheels measuring up to 20 inches in diameter. 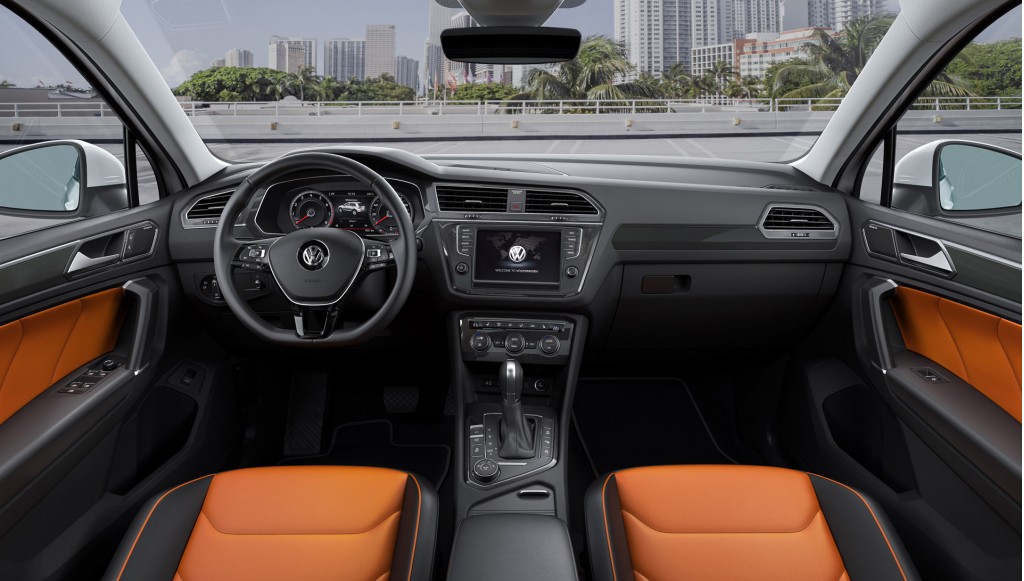 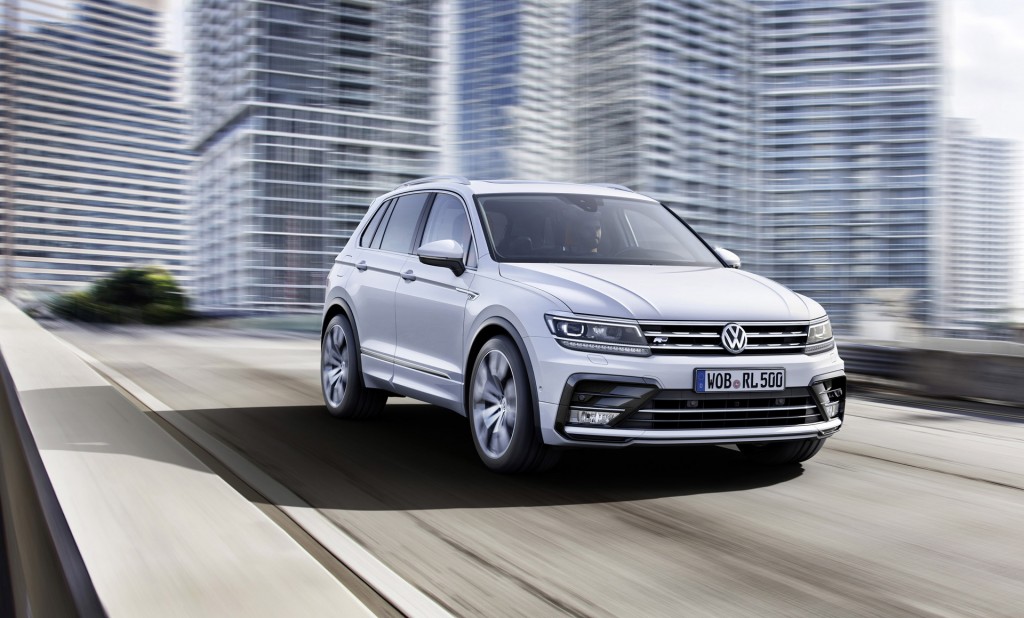 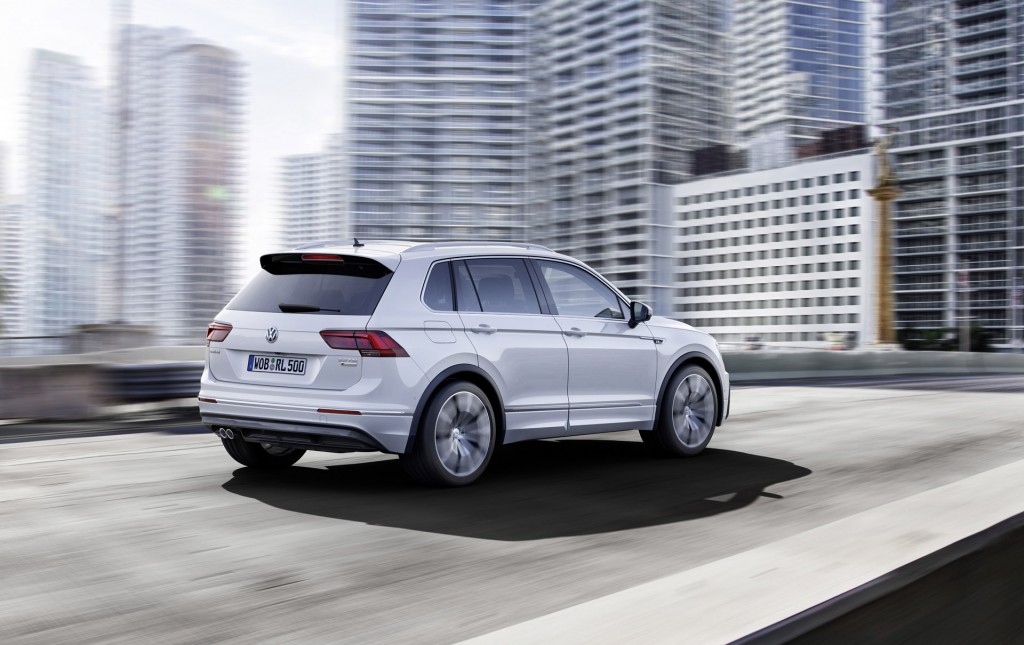 Inside, the basic layout is similar to what you find in the Golf hatchback. However, there are some pretty advanced technologies available. The headline item is VW’s 12.3-inch digital instrument cluster which replaces the standard traditional gauges and has five different profiles to choose from. This instrument cluster flows into the center stack that integrates a touchscreen display for the infotainment system.

Then there’s also an available head-up display as well as a host of electronic safety and convenience features. These include lane departure and blind spot warning systems, adaptive cruise control, pedestrian detection systems, a 360-degree view camera and an emergency system that can detect whether the driver is conscious and bring the vehicle to a standstill if required.

Powertrain options will be market dependent, but we can expect a turbocharged 2.0-liter four-cylinder to remain the volume option on these shores. This is likely to be joined by a diesel option for the first time. For the European market, the new Tiguan is offered with four gasoline engines delivering between 90 and 217 horsepower, and four diesels offering between 113 and 236 hp.

Drive is normally to the front wheels, but all-wheel drive is available for those that need it. And transmissions include manual and dual-clutch DSG options. In the U.S., expect the DSG to be standard. 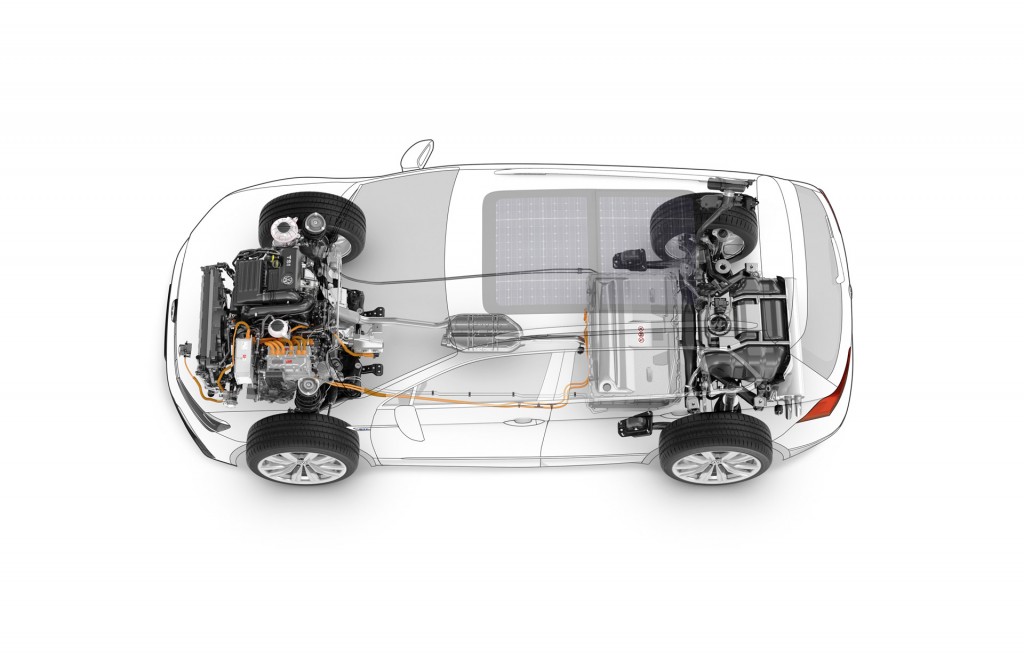 Further down the track a hybrid option will join the ranks, as previewed by the Tiguan GTE concept car. Like VW’s existing GTE models, the Tiguan GTE concept is a plug-in hybrid. It’s a front-driver and relies on a turbocharged 1.4-liter four-cylinder engine working in partnership with an electric motor integrated with the transmission, in this case a dual-clutch DSG. Peak output is 215 hp. The electric motor is powerful enough to drive the vehicle alone, and with a full charge of the onboard lithium-ion battery the Tiguan GTE concept should be able to travel approximately 31 miles. As a novelty, the concept is fitted with a solar panel on its roof that has the potential to add an extra 600 miles of driving range per year.

Sales of the new Tiguan commence in Europe in the spring of 2016. The U.S.-spec Tiguan should arrive in showrooms later that year or early in 2017. The vehicle marks the beginning of a major SUV product offensive for VW. In addition to the aforementioned seven-seat Tiguan, we’ll be seeing a larger, seven-seat SUV built in the U.S. Another high-riding VW that we know of is a subcompact crossover, and then there could be at least two crossovers with coupe-like styling: one Tiguan-based and the other based on the U.S.-built model.