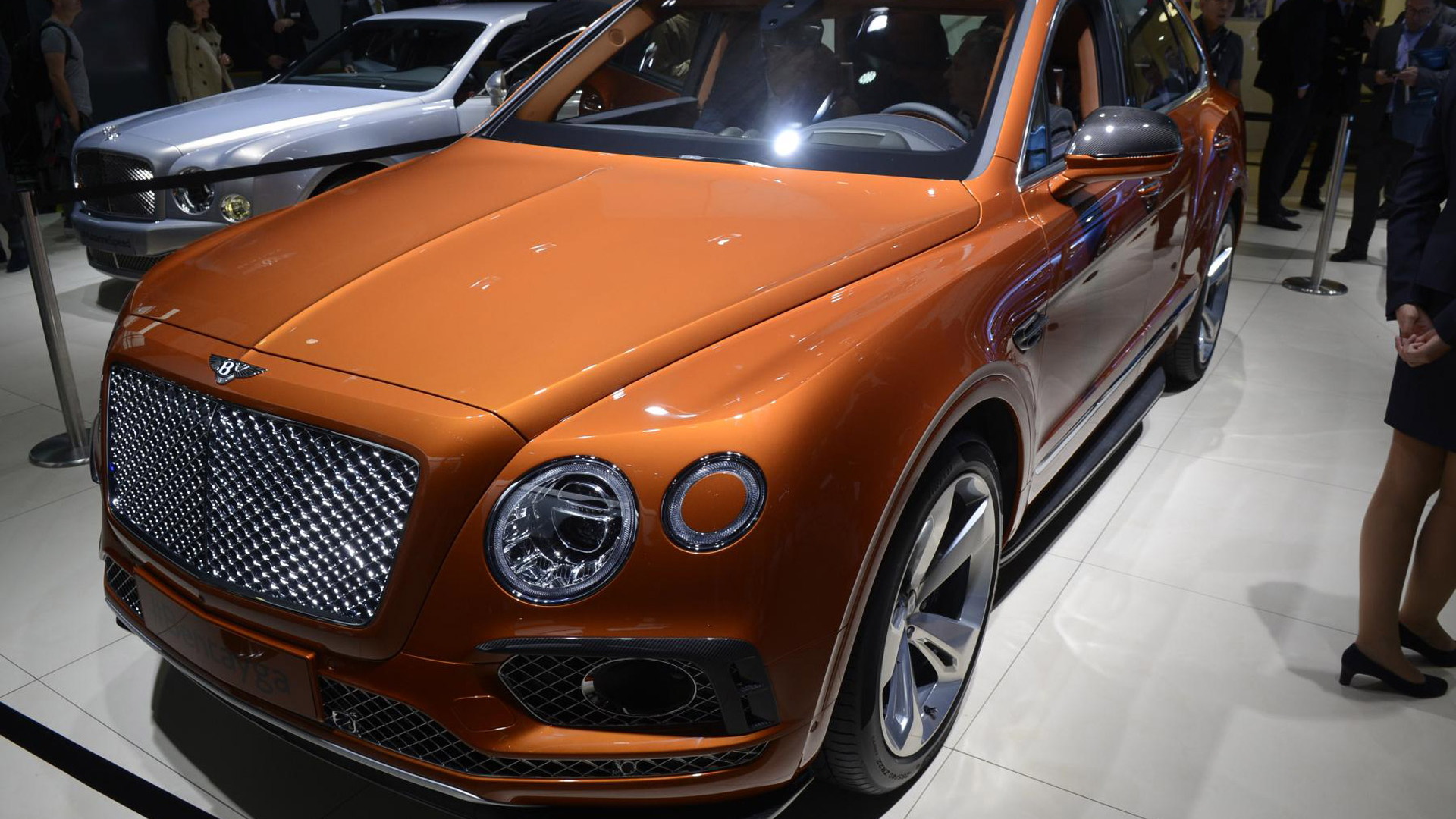 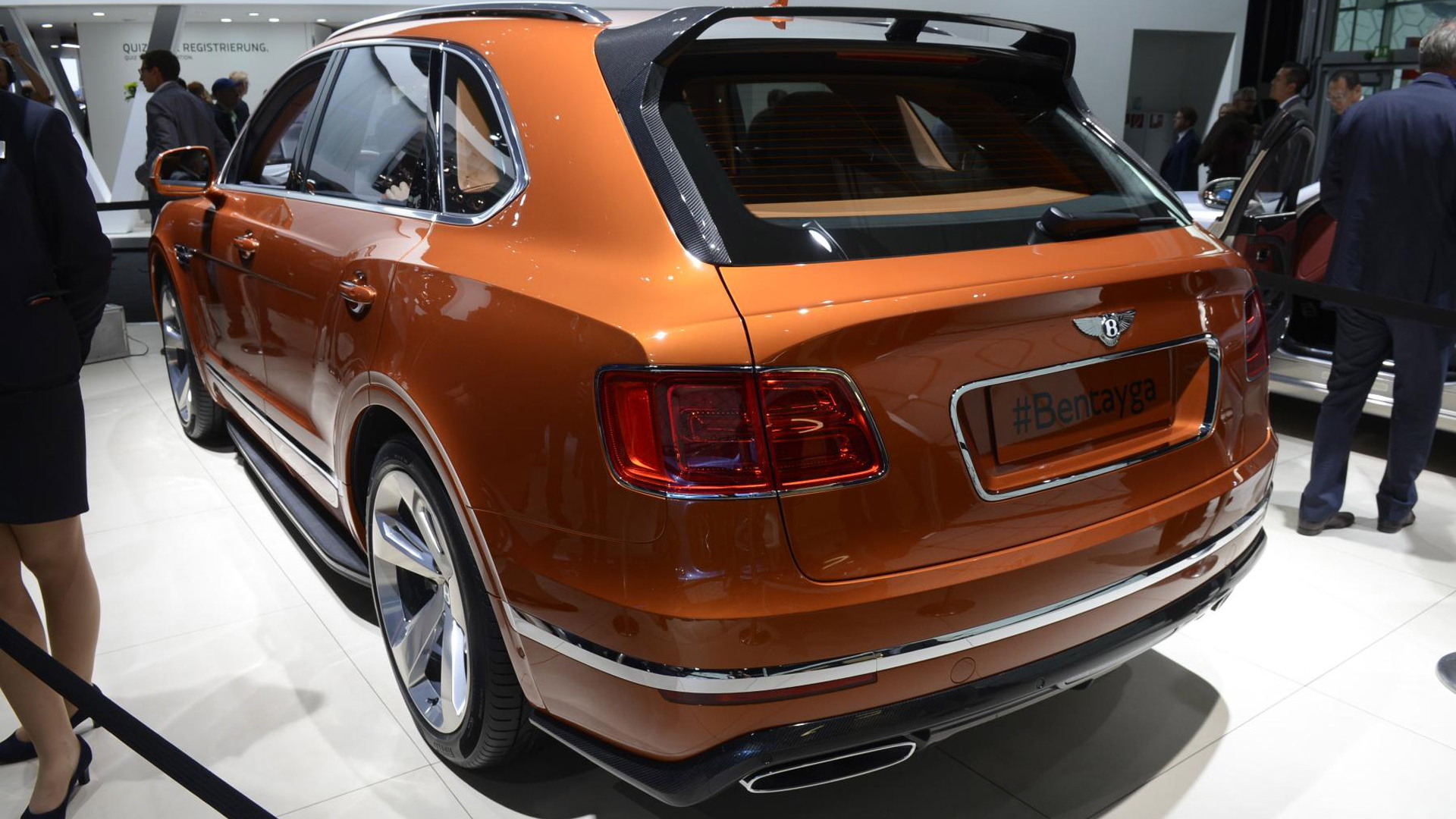 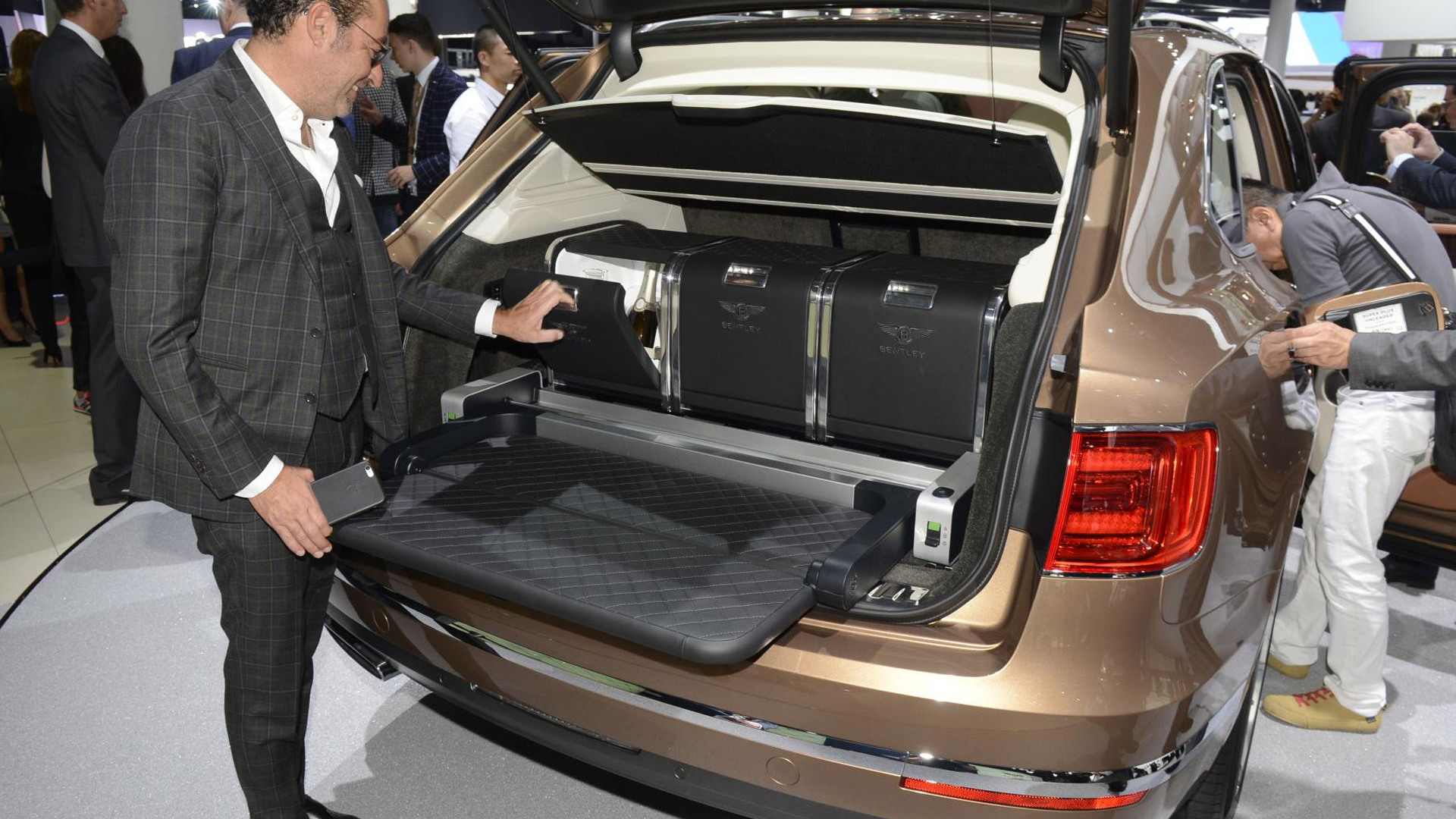 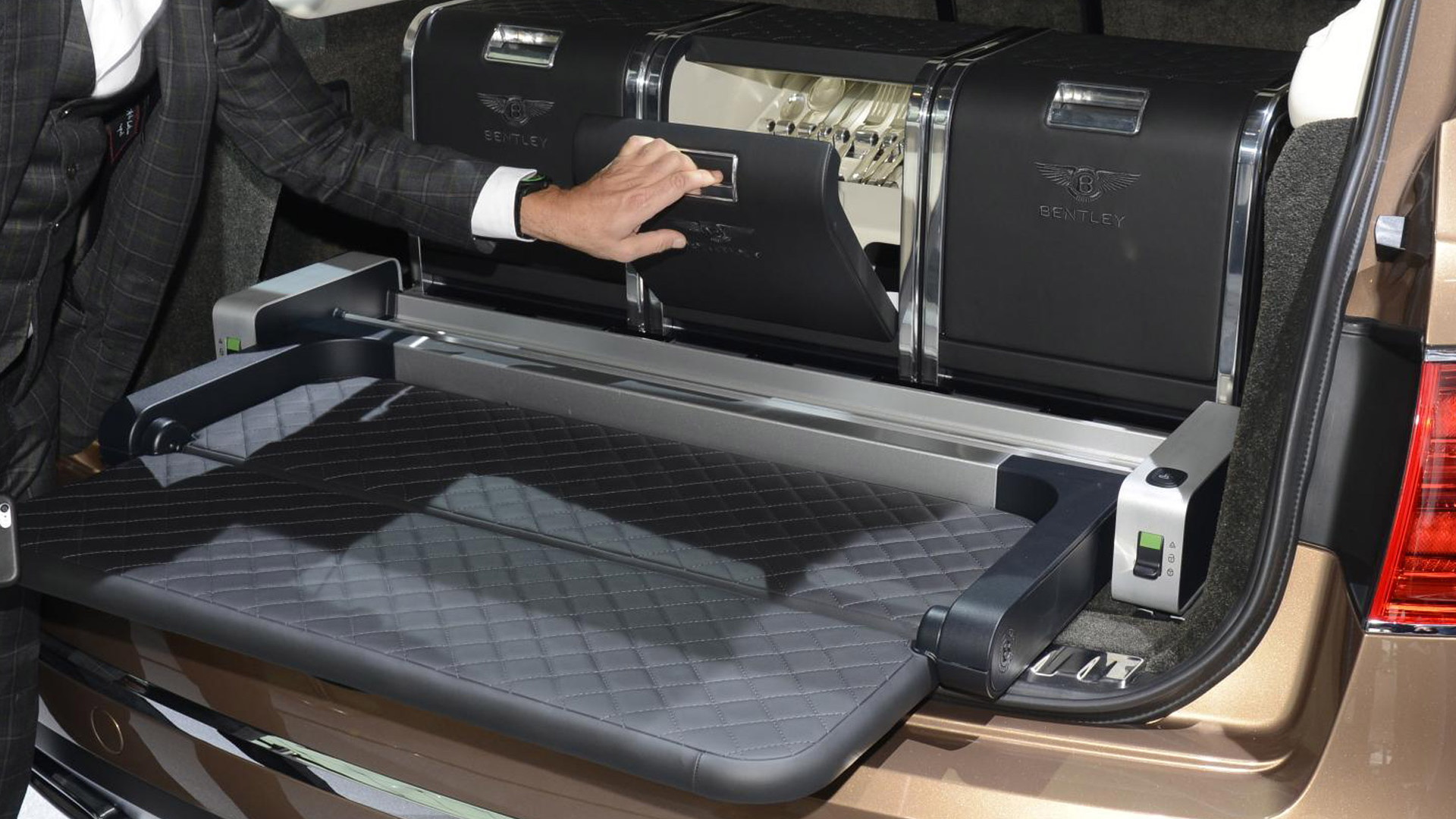 There’s an insatiable thirst for SUVs affecting the globe and the ultra-luxury segment certainly hasn’t been spared. That’s why you have the likes of Mercedes-Maybach and Rolls-Royce planning high-riding models for the first time, but Bentley has beaten them to the punch with its new Bentayga.

Revealed in full at the 2015 Frankfurt Auto Show, the Bentayga is currently the most powerful, most luxurious SUV in production—it’s also the fastest thanks to a 187-mph top speed. It’s set to reach showrooms in the United States in the first half of 2016, as a 2017 model and with a starting price of $230k.

The general styling of the Bentayga is based on Bentley’s EXP 9 F concept from 2012, although the somewhat gaudy front-end design of the concept has been updated to something more elegant and athletic. There are LED headlights, paired with oval-shaped daytime running lights that incorporate telescoping headlamp washers.

As standard, the Bentayga comes with a panoramic glass roof. Making up almost 60 percent of the roof, the massive glass surface is split into two panes. The front panel tilts and slides, and the whole glass feature can be covered by an automated blind. Either side are aluminum roof rails that combine a high-gloss black base and bright anodized top section. Wheel sizes for the Bentayga range from 20-22 inches in diameter.

Inside, you find Bentley’s traditional leather, wood and metal elements. Five seats are standard but a four-seat version can be ordered and further down the track a third-row option enabling seven seats to be fitted will be offered. Rear seat passengers benefit from the introduction of the Bentley Entertainment Tablet—a removable 10.2-inch Android device with 4G, WiFi and Bluetooth connectivity. Another handy item is park assist, which detects suitable parking spaces (both parallel and perpendicular) before autonomous steering takes over.

There are plenty of other tech features, such as a head-up display, digital instrument cluster, night vision mode, and a vehicle dynamic mode selector allowing the driver to pick the ideal vehicle setup depending on the situation. The latter includes an optional Responsive Off-Road Setting that allows the driver to select the appropriate vehicle settings for a wide range of off-road surfaces. In this mode, key metrics such as pitch, roll, wheel articulation, steering angle, compass bearing and altitude are shown on the main display.

You also get a suite of electric driver aids for the urban environment, which will most likely be the sole domain of most Bentaygas. In addition to the lane departure, blind spot and traffic sign warning systems, you also get a predictive adaptive cruise control system that uses the navigation data, sensors and cameras to predict upcoming corners, city boundaries and speed-limit changes and can then modify the vehicle speed accordingly, improving both comfort and fuel economy. Also aiding fuel economy is electric power steering.

As previously reported, the Bentayga is based on the same SUV version of the Volkswagen Group’s new MLB Evo platform that debuted in the 2017 Audi Q7. This same platform, in shortened form, will eventually appear in next-generation versions of the Porsche Cayenne, Volkswagen Touareg and even a new SUV from Lamborghini based on 2012’s Urus concept. Its lightweight design meant Bentley saved roughly 520 pounds compared with more conventional construction methods. Nevertheless, the Bentayga’s curb weight is still a hefty 5,340 lbs.

Thankfully, Bentley equips the Bentayga with one of the mightiest mills in production, a newly developed twin-turbocharged 6.0-liter W-12. Here, it’s rated at 600 horsepower and 663 pound-feet of torque, allowing the Bentayga to accelerate to 60 mph in just 4.0 seconds and max out at the aforementioned 187-mph top speed.

The engine is mated to an eight-speed ZF automatic. The transmission and four-wheel-drive system has been strengthened to handle the demands and high torque levels of off-road driving, but key modifications have also been made to aid fuel economy. In addition to an engine stop-start system, there is also a coasting function where the engine is disconnected at high speeds, such as cruising on the highway. When the throttle is applied, or the car starts going downhill and detects an increase in speed, the engine and transmission are reconnected.

EPA-rated fuel economy is yet to be announced but Bentley estimates 14/20 mpg city/highway and 16 mpg combined. Given the weight and performance of the Bentayga, the figures are reasonable. However, Bentley will be offering customers much more fuel efficient options. The automaker has confirmed that the Bentayga will also offer diesel and plug-in hybrid options in the near future. The timing of the diesel is unclear but Bentley has previously stated that the plug-in hybrid would be launched in 2017. Also thought to be arriving in 2017 is a high-performance Bentayga that could possibly be branded a Speed.

Finally, it’s worth mentioning all the chassis mods that help the Bentayga not only handle rough terrain but also the race track. The key is a new system called Bentley Dynamic Ride, which Bentley claims is the world’s first electric active roll control technology. This instantly counteracts lateral rolling forces when cornering and ensures maximum tire contact at the limit, and according to Bentley the system is superior to conventional anti-roll bars as it can alternate between body control and ride comfort.

There is also a Hill Descent Control system that regulates the vehicle’s speed on steep declines (greater than 5 percent), allowing the driver to concentrate fully on steering and obstacles ahead. And as with all Bentleys, the Bentayga comes with multi-mode air suspension. The driver has four different modes to choose from: High 2, High 1, Normal and Low. There’s also a button in the trunk that lowers the rear to ease loading and trailer hitching.