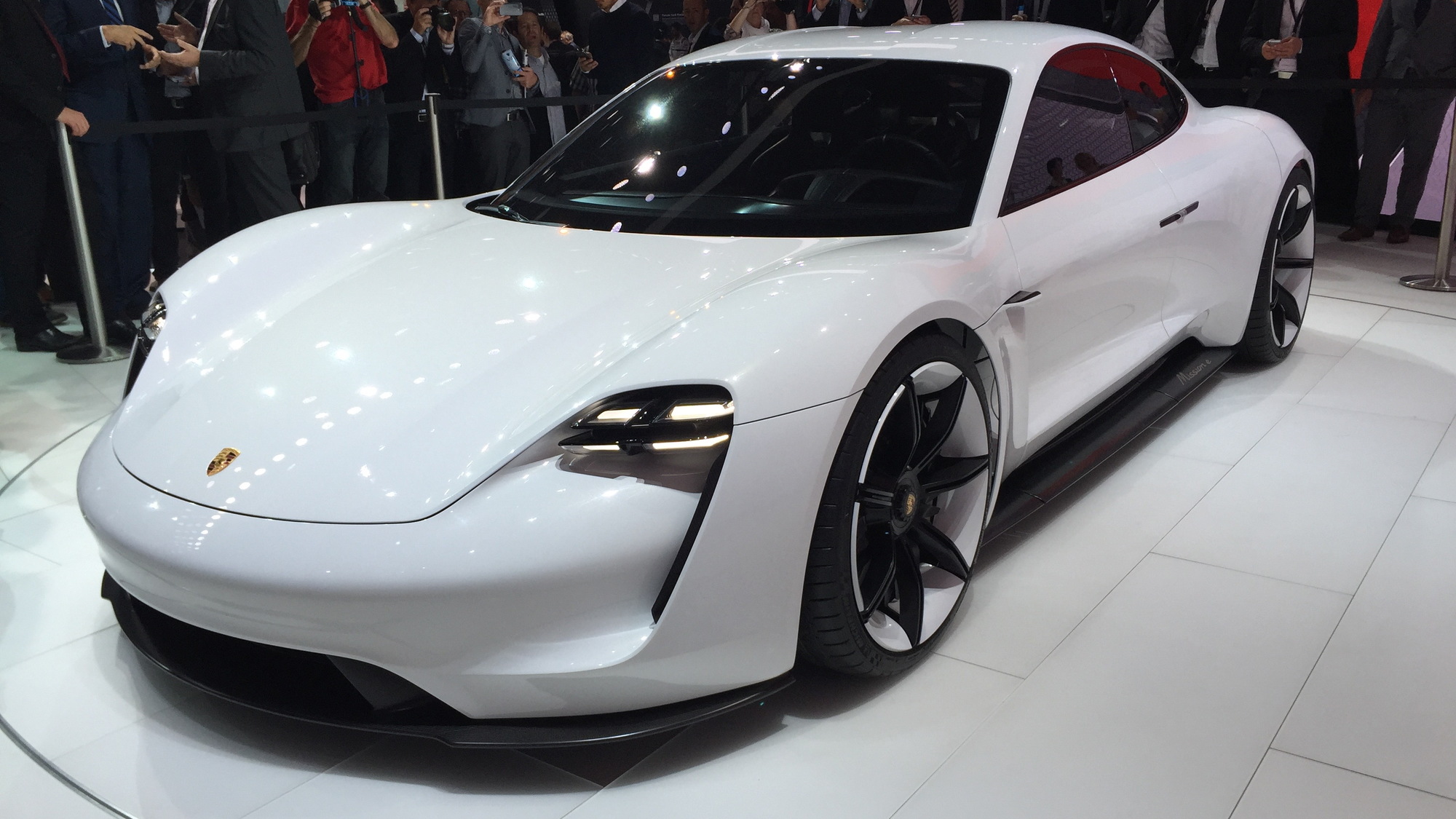 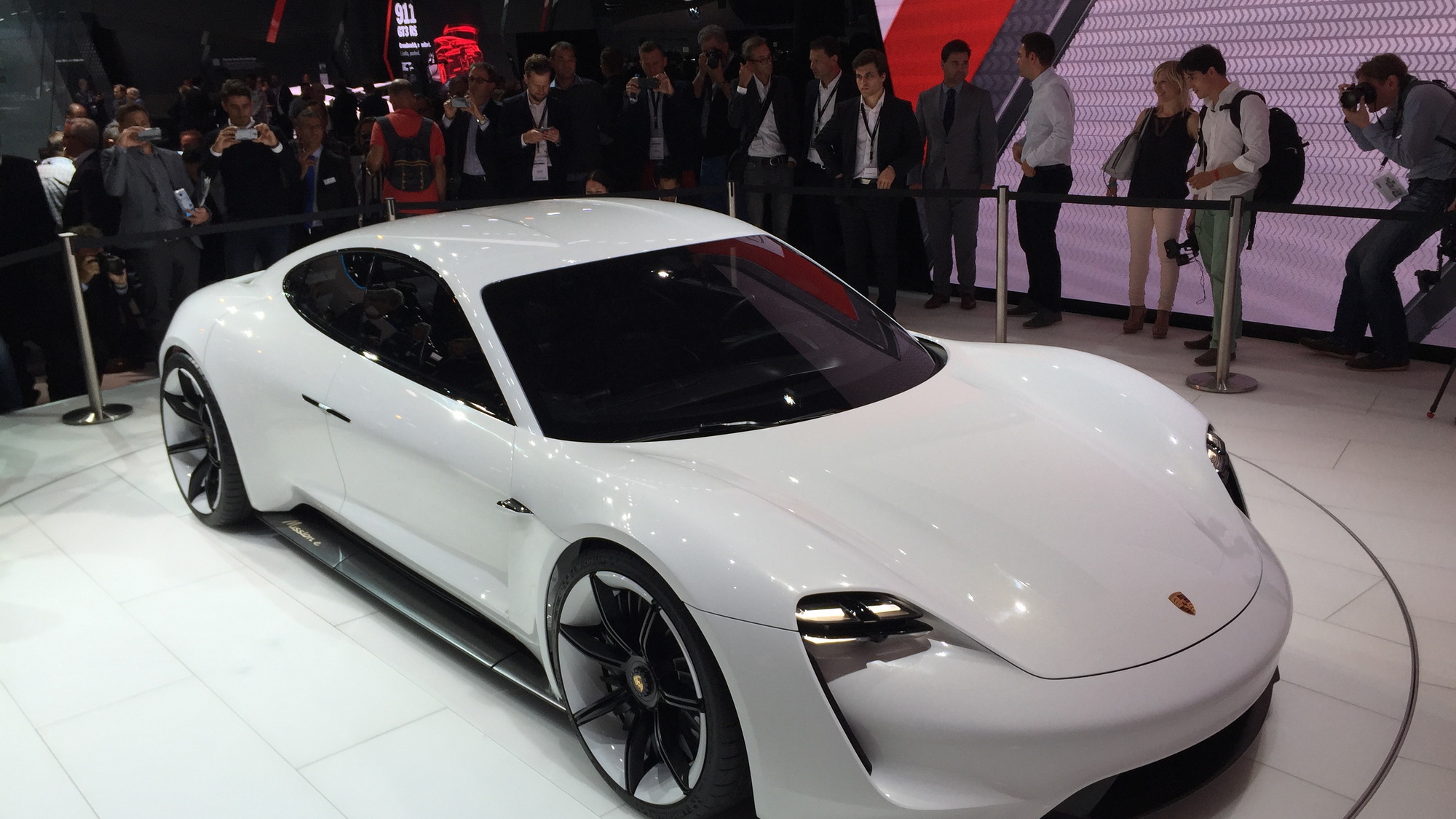 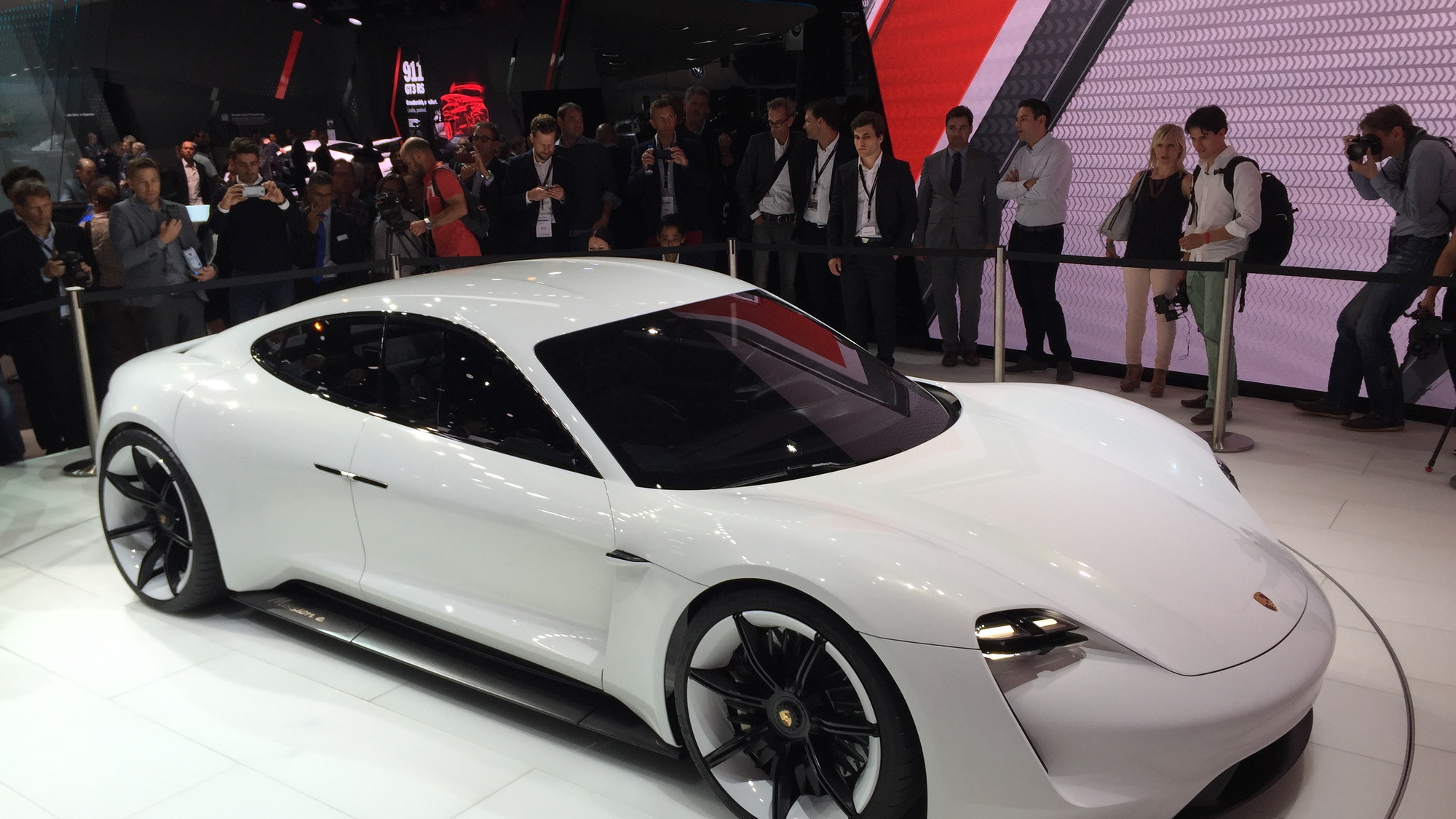 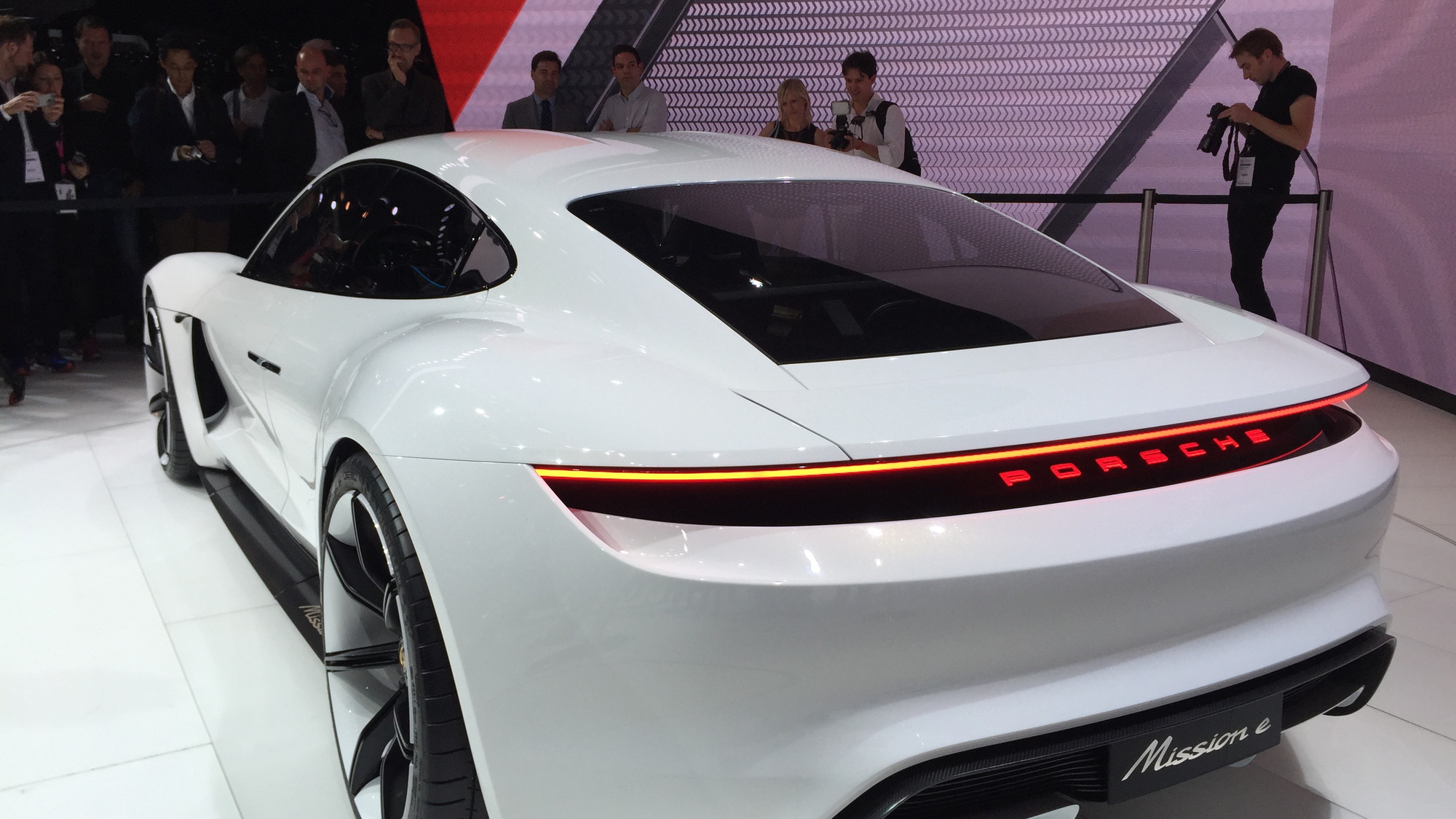 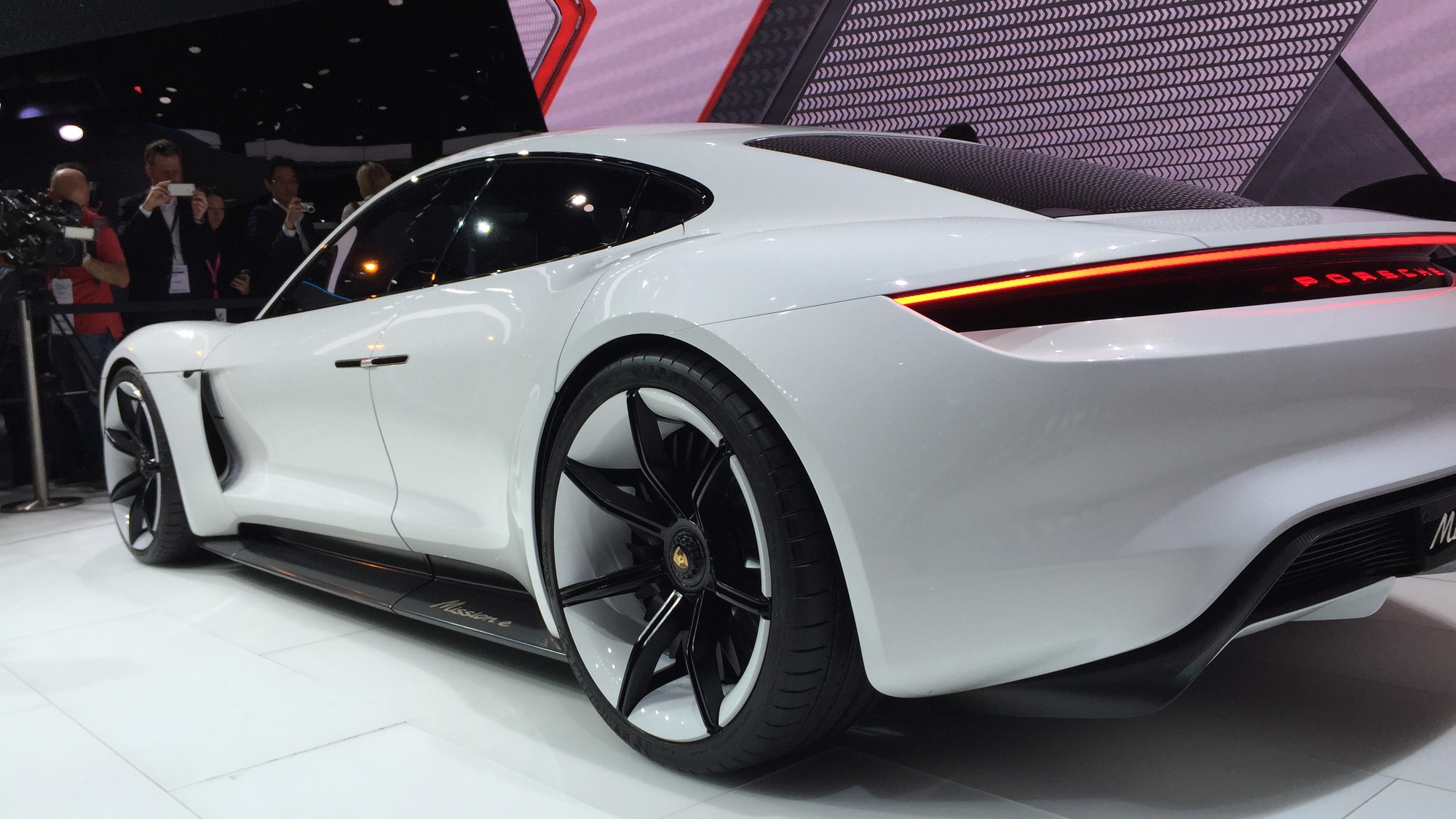 If you ever wanted to know what a Porsche ten years down the track might be like, look no further than the Mission E concept car unveiled moments ago. It’s a sleek, mid-size sedan that looks almost like an elongated 911, and Porsche boasts that the concept develops more than 600 horsepower from a battery-electric powertrain.

It was in 2010 that Porsche first confirmed it was researching electric propulsion, which it followed up a year a later by rolling out a battery-powered prototype based on its Boxster sports car. Since then, Porsche has been testing the waters for electrified performance cars, starting initially with hybrids and more recently moving into plug-in hybrids. Now, there is the Mission E.

Due for an official debut tomorrow at the 2015 Frankfurt Auto Show, the Mission E is tangible evidence that Porsche is at least seriously considering a second sedan, one smaller than the Panamera and perhaps available with all-electric power to give the German automaker a direct rival to the offerings of Tesla Motors [NSDQ:TSLA].

It features a pair of electric motors, one at each axle to create a sophisticated all-wheel-drive system. The system automatically distributes torque to the individual wheels and works together with an all-wheel-steering system to give precise, sporty handling. Performance specs include 0-62 mph acceleration in 3.5 seconds and a Nürburgring lap time of under eight minutes.

And unlike today’s electric drivetrains, the one in the Mission E is designed to develop its full power even after multiple accelerations at short intervals. The driving range, meanwhile, is said to about 310 miles,  and when you start to run low on juice the batteries in the Mission E can be recharged to 80 percent of their capacity in just 15 minutes. The key is Porsche’s pioneering 800-volt technology.

Doubling the voltage—compared to today's electric vehicles that operate at 400 volts—offers multiple advantages: shorter charging times and lower weight, because lighter, smaller gage copper cables are sufficient for energy transport. As an alternative, the technology platform can be connected to a conventional 400-volt charging station, or even at home using a standard wall outlet. Of course, charge times using the lower voltage systems will take longer.

Inside, there are four seats spread over two rows. By going the electric route, it made it possible for the designers to fully reinterpret the interior. The lack of a transmission tunnel, for instance, opens up space and gives a lighter and more airy atmosphere to the entire interior.

The entire dashboard is also chock full of new ideas. Its upper layer integrates the driver's display, and between the levels sits a holographic display that extends far into the passenger's side. It shows individually selectable apps, which can be used to control the climate control, navigation or media systems, and these are all stacked in ‘virtual space’ and arranged by priority with a three-dimensional effect.

Controlling these apps is done via gestures that are detected by sensors. A grasping gesture means select, while pulling means control. Moreover, driver or passenger can use a touchscreen display on the center console to control secondary functions such as more detailed information menus.

The last feature worth mentioning are the camera-based side mirrors. The lower corners of the windscreen show the images of the outside cameras that are mounted in the front fenders. The benefits: the driver gets a better view of images and the surroundings, and safety information can also be actively displayed there. The design is also much more aerodynamic than would be with a conventional side mirror.

Might we one day see a car like the Mission E in production? Perhaps the oft-rumored Pajun (Panamera Junior)? Porsche says a decision should be made by December. In the meantime, read the rest of our Frankfurt Auto Show coverage over at our dedicated hub.