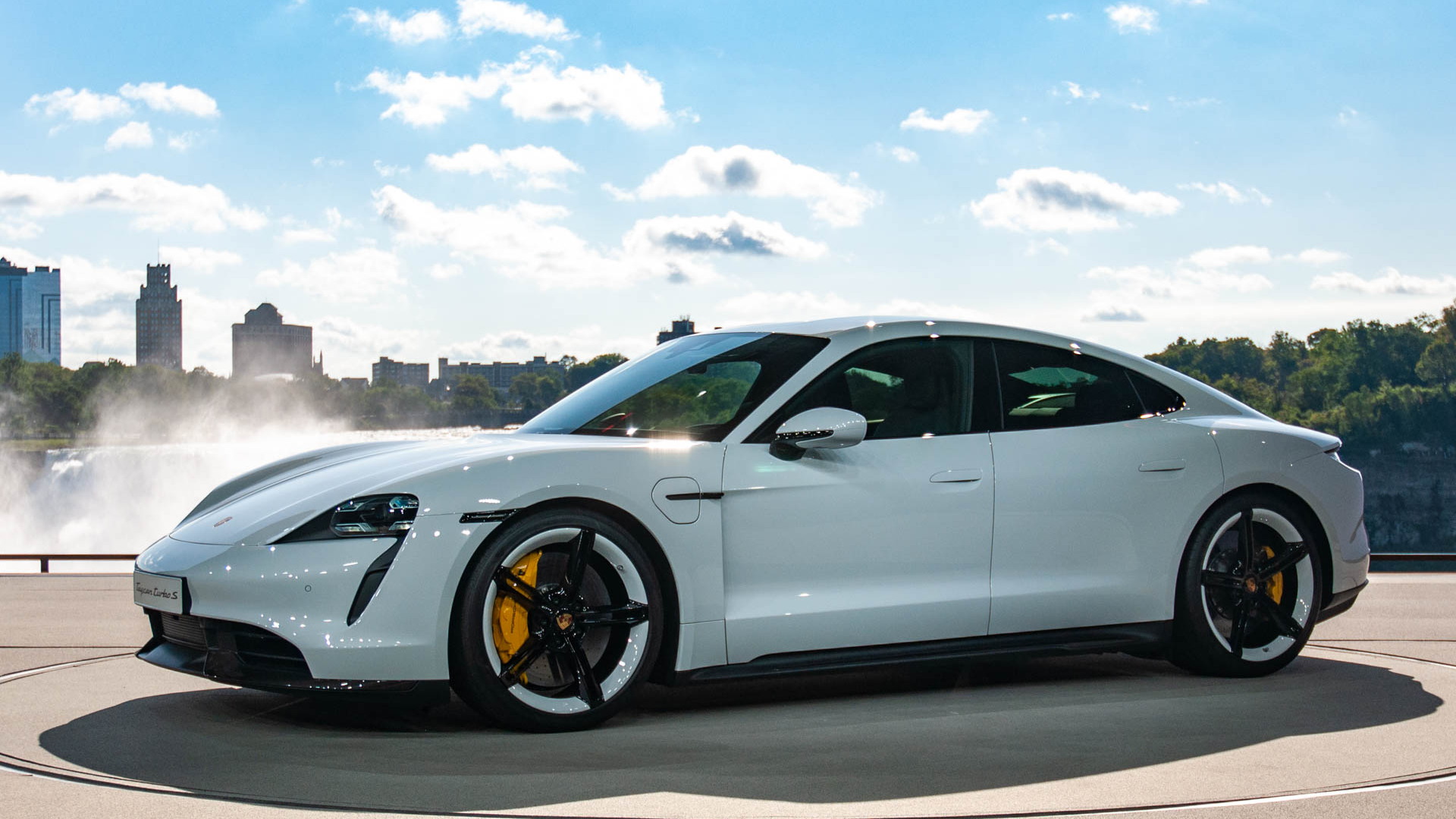 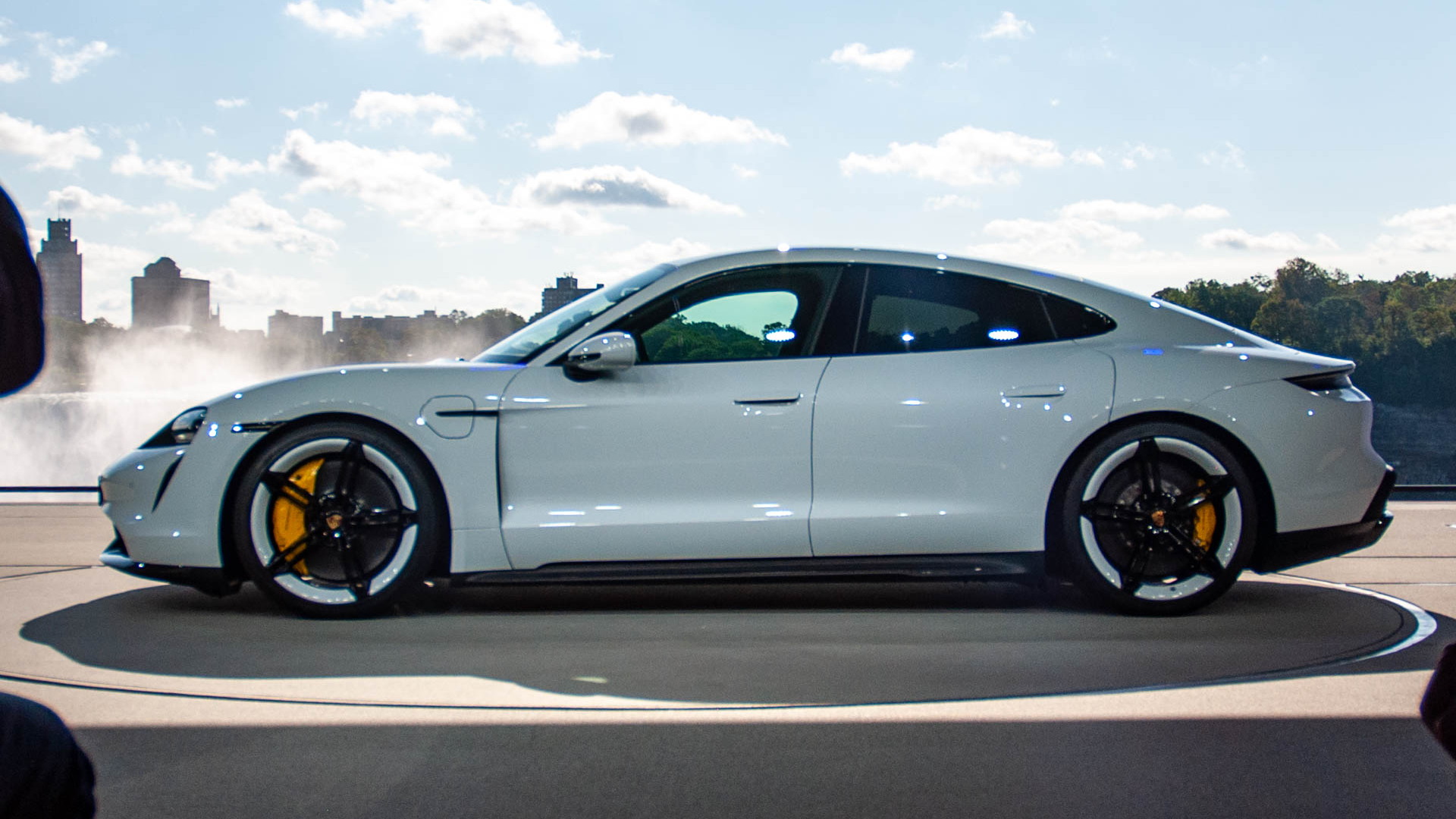 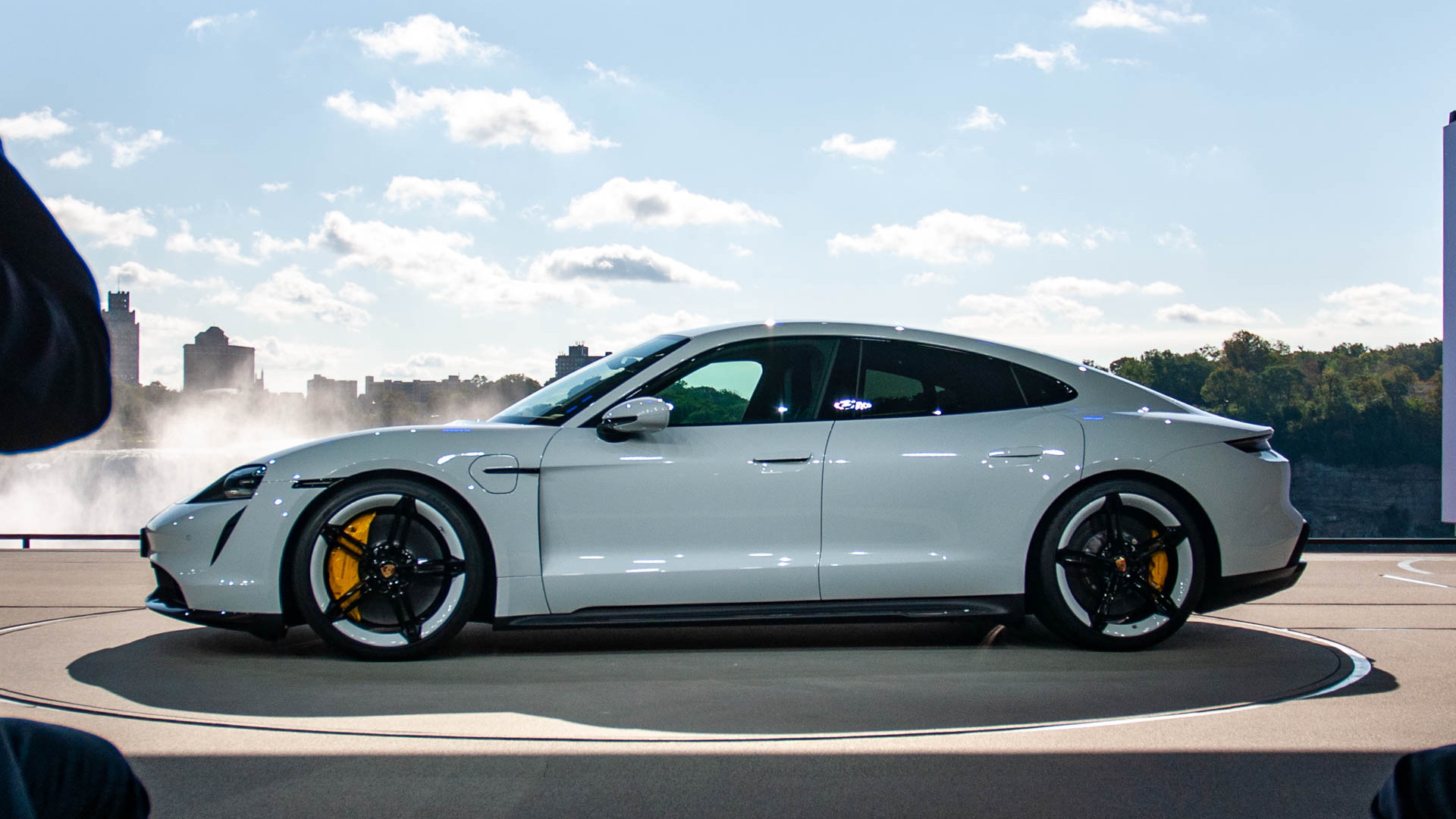 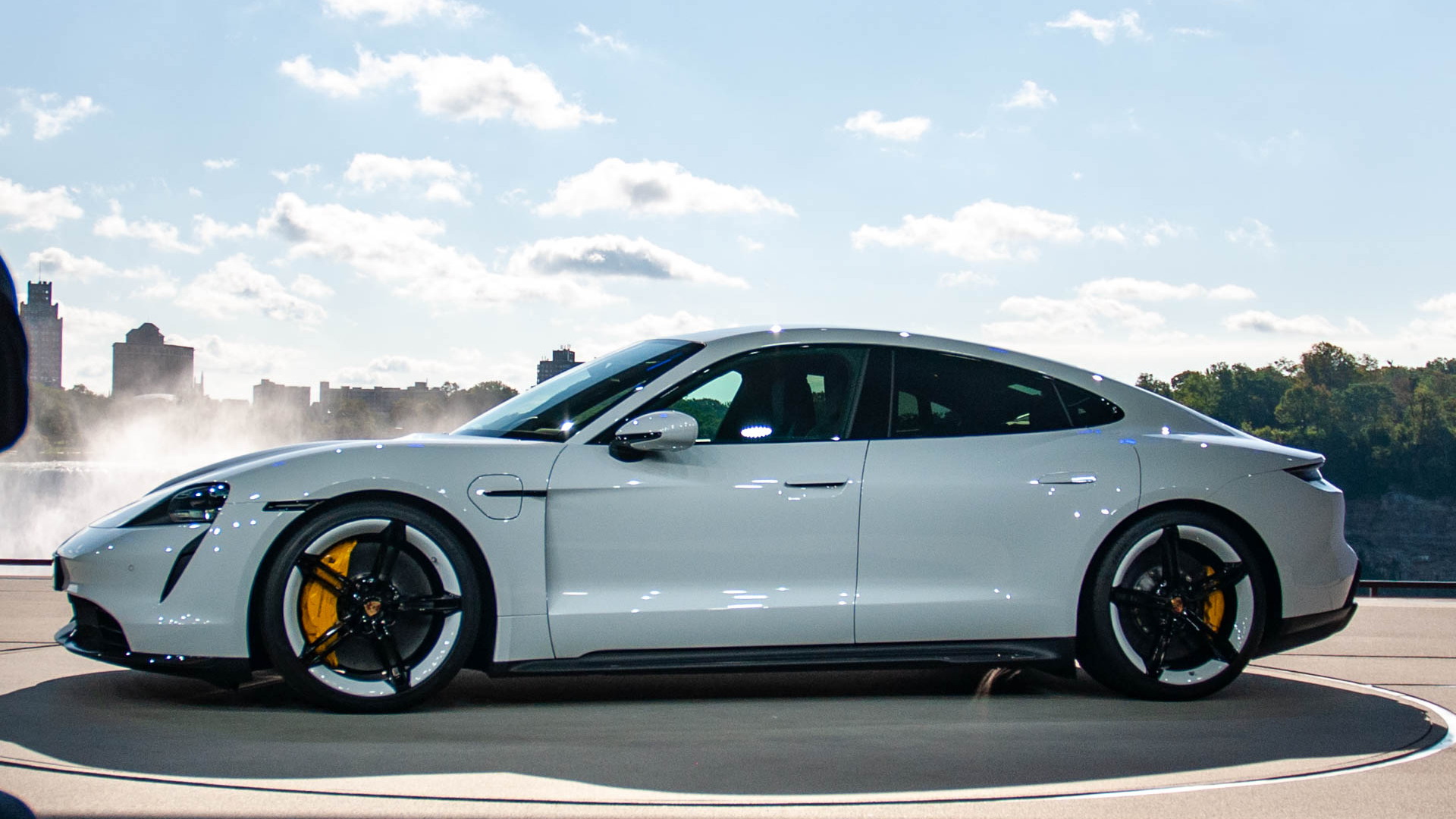 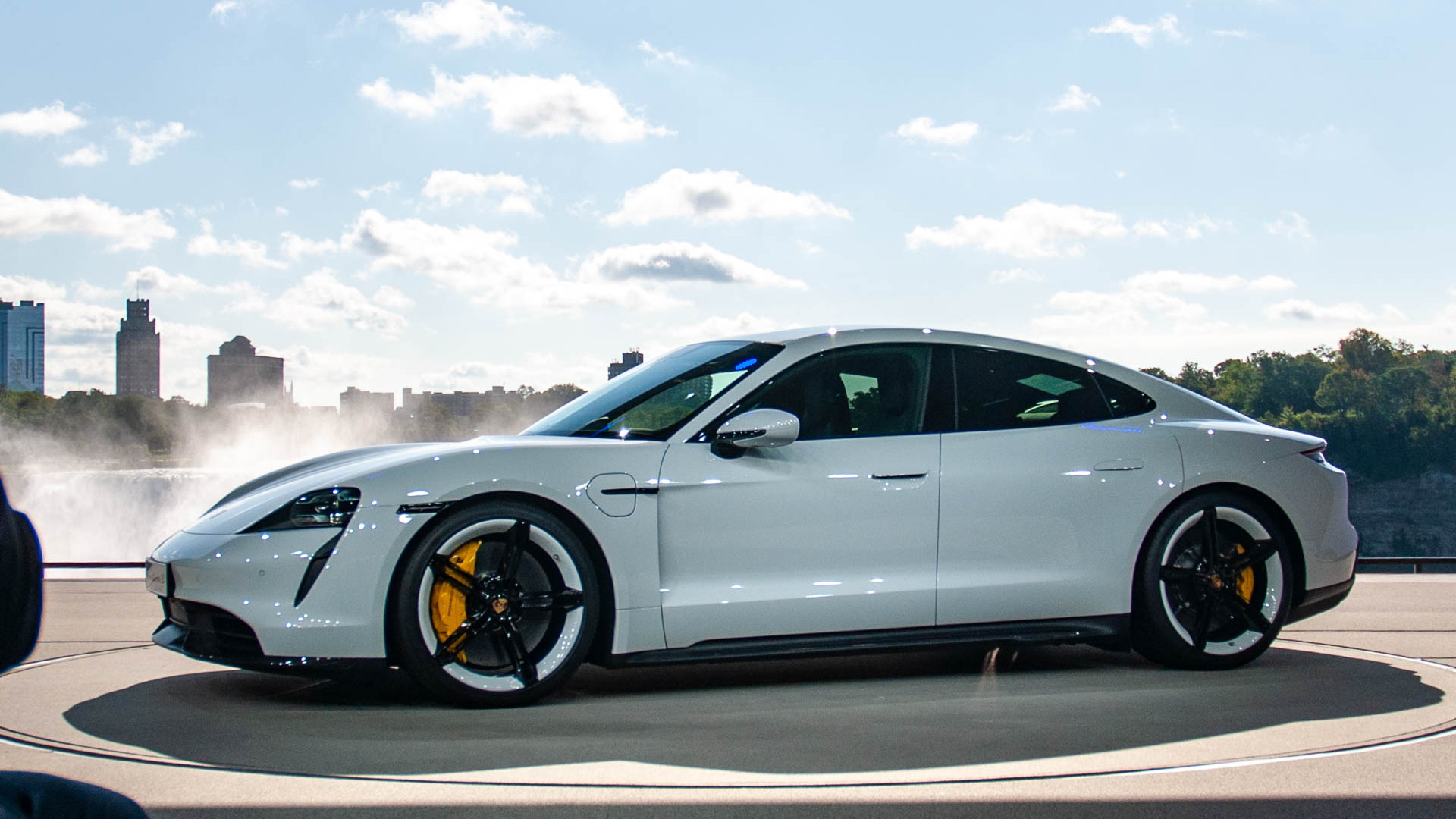 As the first mass-produced electric car with 800-volt charging, the 2020 Porsche Taycan is anything but business as usual.

On Wednesday, Porsche unveiled its first electric car, the 2020 Taycan, with simultaneous events in Niagara Falls, Canada; Berlin, Germany; and Pingtan Island, China. The car is a revelation, with up to 750 horsepower, a starting price of $152,250, and the ability to fast-charge using an 800-volt electrical system, a first in a production electric car.

The German automaker previewed the Taycan four years ago with the Mission E concept at the 2015 Frankfurt motor show. The concept's exterior transferred to the production car, from the front bumper intakes that direct air into the front wheel wells, to its white and black wheels, to its quad LED daytime running lights, and to its LED light bar running the full width of the rear end.

Taycans ride on Porsche's new J1-platform that will be shared with the upcoming Audi E-tron GT. Power is derived from a 1,389-pound 93.4-kwh battery pack that's mounted in the floor of the passenger compartment. Electric motors on the front and rear axles give the electric Porsche all-wheel drive. The rear axle gets a two-speed transmission with first gear prioritizing acceleration from a standing start while the second, taller, gear is onboard for efficiency and power at high speeds.

The 2020 Taycan has the world's first production 800-volt electrical system, which under ideal conditions can take take the battery pack from 5 to 80 percent state of charge in 22.5 minutes with a maximum charge rate of up to 270 kw. Porsche is installing 800-volt fast chargers at its dealerships across the nation and calls some of them Turbo Chargers. Taycan buyers will also get free fast-charging on Electrify America's charging network for the first three years of ownership.

Porsche hasn't released how far the Taycan will go on a charge in the U.S. and doesn't have EPA ratings, yet. The German automaker said the Taycan has a range of of 381 to 450 km (236 to 279 miles) in Turbo form and 388 to 412 km (241 to 256 miles) in Turbo S form on Europe's WLTP cycle. The WLTP cycle is measured differently and doesn't typically translate to the same range ratings in the U.S.—though for now, 240 miles of range is a fair estimate.

Acceleration is exceptional. Using launch control, Porsche said Turbo models sprint from 0 to 60 mph in just 3.0 seconds while Turbo S models drop that time to 2.6 seconds. Top speed for both models is 161 mph.

An optional adaptive air suspension and electronic dampers work with electronic roll bars to control the Taycan's 5,132 pounds of mass. The Taycan's brake setup, which features steel rotors with white calipers on the Turbo models and carbon ceramic rotors with yellow calipers on the Turbo S, has been tuned to maximize power regeneration. Porsche said up to 90 percent of everyday braking can be performed without engaging the mechanical braking system.

Turbo models feature a staggered 20-inch wheel setup with Turbo Aero Wheels wrapped in 245/45s up front and 285/40s in the rear. There's more rubber to grip the road on Turbo S models with 21-inch Mission-E Design Wheels wrapped in 265/35 tires up front and 305/30 tires in the rear. Regardless of model, Porsche fits all-season tires, though the company has not confirmed which tires or whether stickier summer tires will be a factory option.

Like gas-powered Porsches, the 2020 Taycan will feature five driving modes: Normal, Sport, Sport+, Individual, and one specifically made for an electric car, Range.

Inside, the Taycan features up to five screens including a fully digital floating gauge cluster. The central 10.9-inch touchscreen handles main vehicle functions and the infotainment system. Porsche's included a digital assistant that can engage certain vehicle functions by simply saying, "Hey Porsche." An analog and digital stopwatch sits proudly atop the dashboard, part of the Sport Chrono package.

Porsche teamed up with Apple to integrate the Silicon Valley company's Apple Music streaming service into the Taycan. Each Taycan will come with a six-month free subscription to the service, and current subscribers will get three months for free.

The Taycan is the first Porsche to be available with a leather-free interior option and features panels made from recycled materials.

Porsche's Taycan is a sedan, but due to its electric layout it features two trunks with 2.8 cubic feet of cargo space under the front hood and 12.9 cubic feet in the rear trunk.

The Taycan is Porsche's first electric car, but it's far from its last. A lifted wagon version based on the Cross Turismo concept has been confirmed for production, and the next-generation Macan will be all-electric. Klaus Zellmer, Porsche North America CEO, told Motor Authority that half of all Porsches sold by 2025 will have a plug, whether they are all-electric or plug-in hybrids.